I did nothing but cat nap all night long.  How stupid was it to drink 3 glasses of ice tea with dinner?  I somehow thought that one ‘yellow tulip’ martini before bedtime would counteract all that caffeine.  NOT!!!
About I began to hear the normal whizzing & whirring sounds that announce a pending arrival into port.  Is it just my imagination or do these (final destination) noises somehow sound different from the ones you hear at a regular ‘port of call’?  I turned on the bridge camera to see that the sun was already up; & the skyline of B.A. was getting close.  So, I threw on Capri pants & the HAL bathrobe; grabbed the camera & ran out the ‘secret door’ for the final sail in of this voyage. 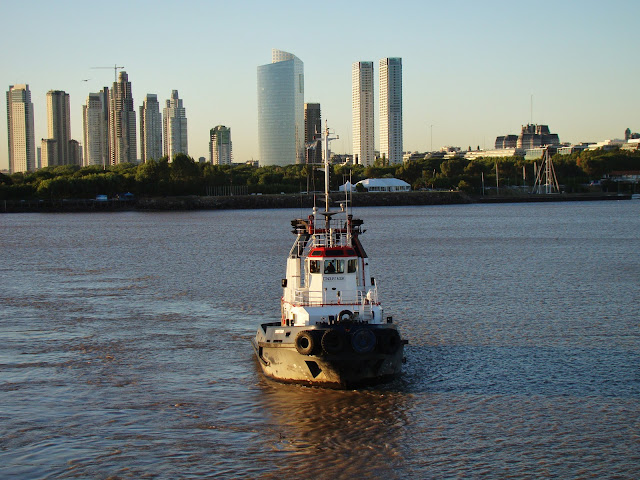 The air was cool; & the sun reflecting off the ultra modern high rise buildings was blinding.  A large tug was close behind us; & I could see off in the distance another large cruise ship also coming into port.  On the starboard side were acres & acres of cranes & shipping containers.  We were obviously heading for the commercial port area. 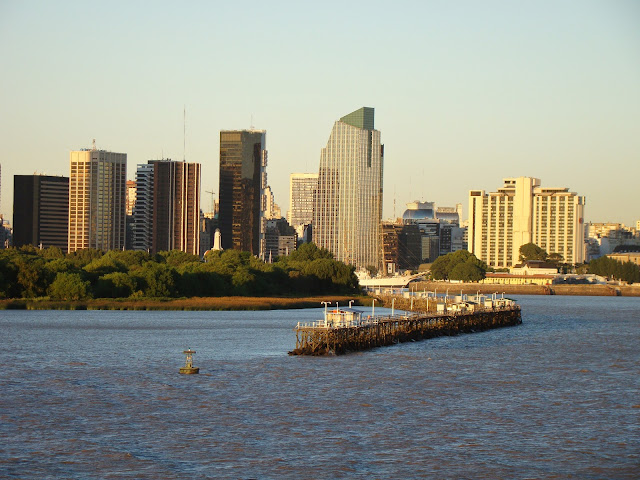 On the port side was ‘downtown’; it was a stunning sight.  A few people were up & around.  Some in various states of undress, like myself.  Went back in the cabin about ; wrapped up in a blanket on the sofa & watched a replay of last night’s Laker’s game while I waited for my room service breakfast.  Had I known I would be up so early, I wouldn’t have requested it between -9.  I told my cabin steward that he was free to come in & start changing linens, etc. because I wouldn’t be in his way.

I left the cabin door open so I could hear Lee Ann & Bill when they left.  She came over to say goodbye.  She wasn’t able to sleep either; but she already dreading the long day at the airport & an overnight flight back home.  I’ll worry about all that tomorrow. 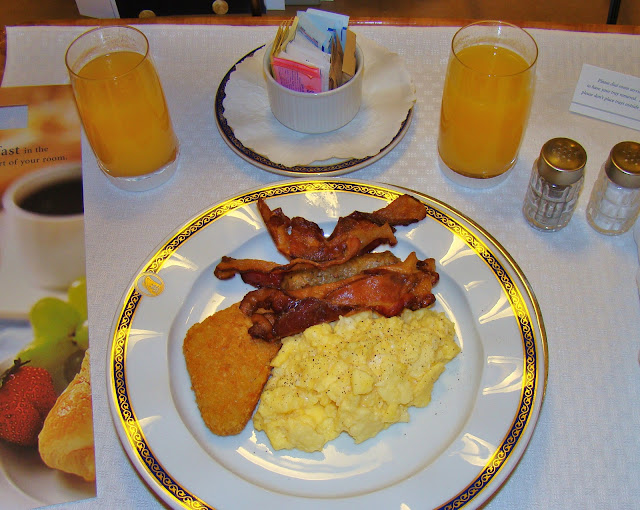 My breakfast came just before .  It was the usual eggs, hash browns, sausage links & OJ.  I hurried to vacate the room so the stewards could do their thing.  I got comfortable in one of the lounges; read & waited for my number to be called.  I could hear people out in the halls complaining about how disorganized the disembarkation was going.  One man said he had called 4 times to make sure he had a wheelchair on order for today.  Each time they assured him everything was in order; & yet there was no chair.  This man was livid.  It did seem more than just the usual chaos.  I think they called too many groups too close together; & it created a backlog.  My group (#24) was the last called at .  My luggage was going straight to the hotel; so I didn’t have to deal with that.
I proceeded to bus #3.  I handed one piece of my hand luggage to the driver to put under the bus.  When I got on the bus, there were no seats; three of us were told to go get on bus #4.  But the storage compartment was shut; & they said not to worry about my bag.  Worry #1.
We sat on bus #4 for about 45 mins. waiting for what, I don’t know.  We finally left the pier at .  After a short drive through this chaotic mess they call traffic in B.A., we were at the Sheraton Libertador.  I watched as bus #3 unloaded their people; & they picked up their bags.  My bus driver wouldn’t let me get off the bus until he was able to safely move up under the portico.  The hotel lobby was overflowing with HAL people going to the ship & coming from the ship; & every sq. foot of the lobby floor was packed with luggage.  I quickly found a HAL rep (A nice young man who spoke great English) to tell him about getting separated from my bag.  He said, don’t worry.  I stood in a check in line for about an hour; only to find out that my room wasn’t ready yet.  I asked if I could have a late check out tomorrow; no, they’re full.  Plan B, see if I could purchase a HAL tour to kill time tomorrow.  While I was standing in that line, the sweet HAL guy came up with my missing bag.  I asked him if anybody had told him that they loved him today.  He laughed; & said no.  So, I told him, I LOVED HIM TODAY.  Whew!
So, I was told to make myself comfy in the lobby; & they’d come & get me in 10-15 mins. when my room was ready.  Half an hour later, I could go downstairs & find my big bags in a holding room.  Thankfully, a lot of the luggage had already been claimed; but you still had to move a lot of luggage out of the way just to pull your own out.  And get this……there were no porters to help.  No carts to use; no nothing.  I had to stack & pull 4 bags up to my room on the 7th floor.  That would be after waiting for about 3 elevators; because you couldn’t fit more than 4 people & their luggage in each car.
I made it to my room (#710) about .  Although nothing to compare to the Marriott in , it’s fine with a view of a brick wall & an air conditioner.  Oh, & they didn’t bother to tell us that there was construction going on up on the 11th floor.  They left a note on our desk to tell us what all the jack hammer & buzz saw noises were. 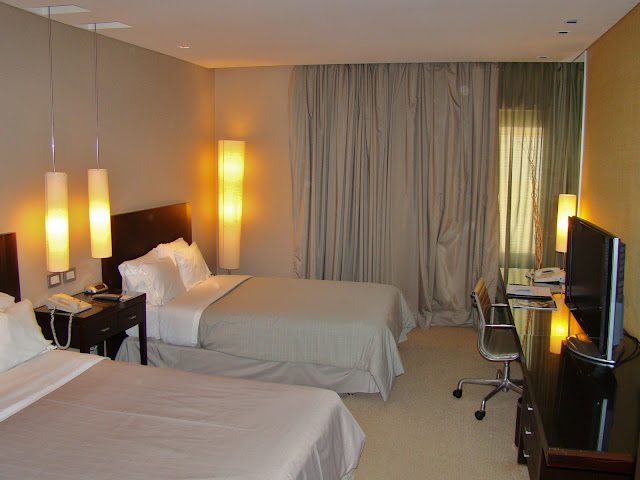 I was way past cranky, tired & getting hungry.  There’s a lot of activity on this street.  There is a huge galleria a block up; a few restaurants; a pharmacy & 4 banks across the street.  First order of business, find an ATM & get some Argentinean pesos. 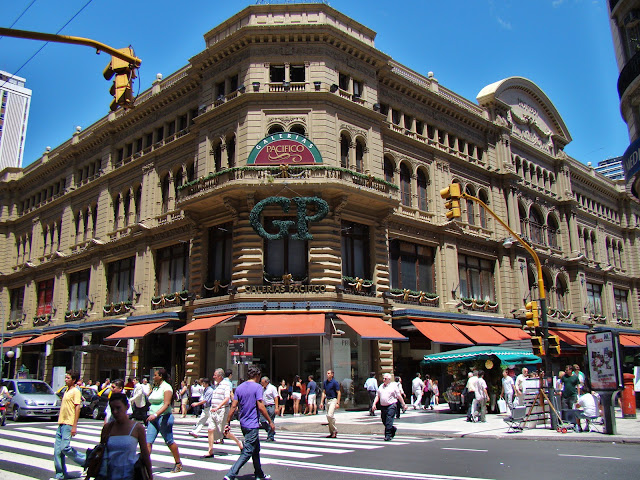 The pedestrian traffic crossed the street when they wanted to; not when the light said it was safe to do so.  I snapped some photos along the way.  You got the impression that a tourist with a camera was alien.  I had people come up to me asking for money.  One was a man, pushing a stroller (no child in there) with a pitifully sad look on his face with his hand out.  I lost any desire to explore the neighborhood.  I felt like the city was going to swallow me whole.  I ducked into the first restaurant I saw to get some lunch. 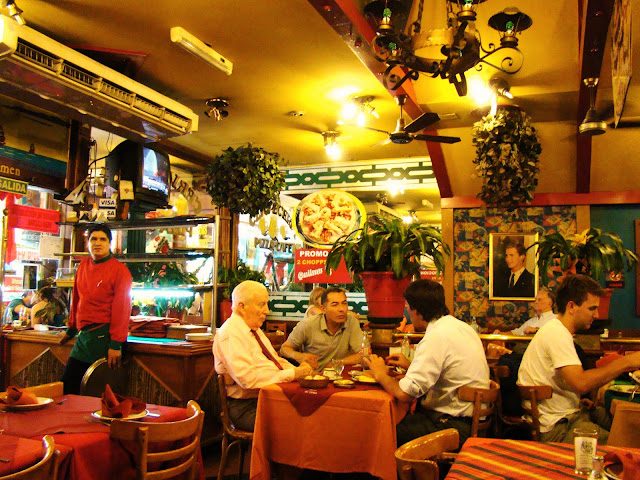 I ended up at Puerto del Carmen, a little neighborhood pizza café/bar.  There were mostly men in there at . Some in pin stripe suits, talking on cell phones.  I swear a few of them look mafiasco-ish!  But the waitress was nice.  I pondered a long time; but decided on a ham & cheese pie (sort of like an overgrown empanada).  It was delicious.  And they had old fashion coca cola, the kind with real sugar,  in the tall glass bottles.  It was so good; I had to have 2 of them. 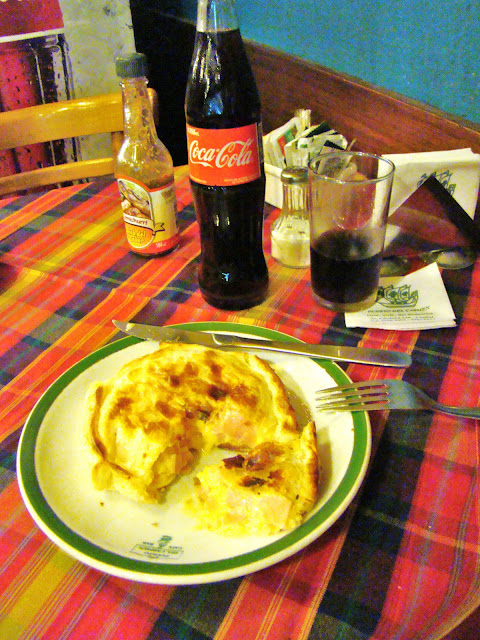 I decided to get a medium size pizza to take back for dinner.  Would you believe my total bill was about $27 USD?  I couldn’t.  Back to my room about 4; couldn’t stay awake any longer.  I turned my IPod on (white noise) to drown out the jack hammers; & fell asleep for 2 hrs.
I ate some pizza; worked on the photos & shuffled stuff in the suitcases again until 11.  It will be a very early morning; & I hope I can get some meaningful sleep.  Tomorrow will be an unmercifully long day. 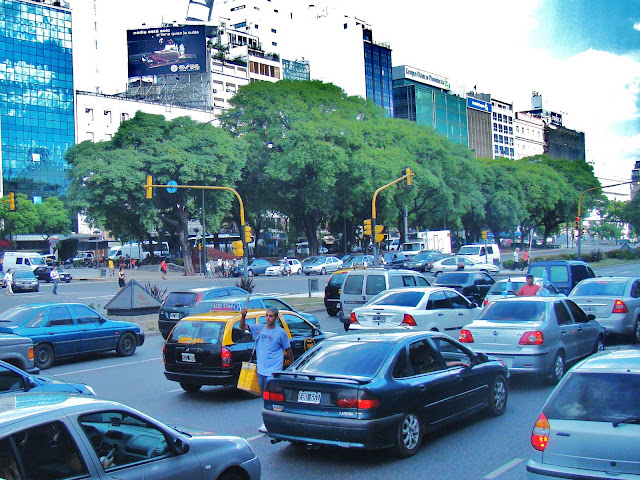 When the 6 lanes of traffic would get backed up, people would pop up out of nowhere trying to sell popsicles & beer.  It was madness!
Posted by Unknown at 7:45 PM