Even though the ship was rocking nicely; I didn’t sleep that well.  Maybe it was sharing the bed with a half packed suitcase or those 3 remaining towel animals that decided to stay forever.  I stayed on my side; & slept little.
I would have preferred to have room service breakfast this morning; but I didn’t have an order form.  It was late last night when I realized that; so I set the alarm (another reason not to sleep well).  My first look outside at didn’t do a lot for me.  Even though you can see a very interesting city skyline beyond, the immediate port area is piled sky high with shipping containers & cranes.  It looked like it couldn’t decide whether to rain or not.  But it turned into a beautiful day, low 80’s; & a nice breeze as long as you stayed close to the water.
I went up to the for breakfast about 8.  It was just a quick scrambled eggs, sausage, hash brown & juice fix to stave off hunger until after my morning tour.  It was very crowded inside; so I ate outside in the Retreat area.  My tour was to meet at 8:45 in the showroom; but I wanted to stop by the reception desk to inquire about changing my gratuities.  They gave me the form to fill out if I wanted to ‘amend’ my tips.  But what I wanted to do was not easy to arrange.  So, I tried to explain to the purser that I wanted to take off tips to the D.R. waiters since I didn’t eat in D.R.  I wanted instead to reward the stewards who had done an outstanding job serving my meals.  Even though someone there had told me a few days earlier that I could make this type of change, this person was telling me otherwise.
I’m not going into great detail about the back & forth of this.  But his answer was that I could add tips to go to staff; but I couldn’t take away from the 35% allocation that was to go to the D.R. waiters (even though their records would show that I never ate in the D.R.)  There was this story about the D.R. waiters sometimes working in he Lido; & that that 35% portion of my tips was also to go to the cooks & other ‘behind the scenes’ food service staff.  No matter how flawed this system seems to me, there was no way I was going to win this one.
I took the city highlights tour; bus #12 (pink) with Tamara as my guide & Jorge, the driver.  Both spoke very good English.  The bus was brand spanking new, even had leg rests; & an “Antarctic” A/C system.  I’m glad it was a morning tour; because it would have been much hotter getting on & off the bus in the afternoon.
My initial overall impression…….the place is booming with construction, there is way too much graffiti & litter on the streets. 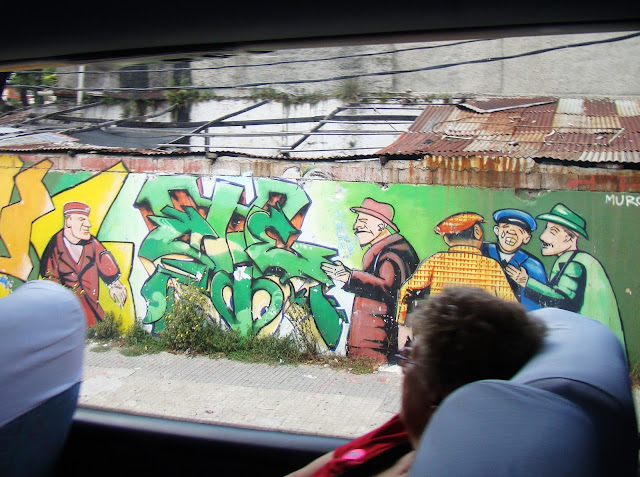 And in some sections of town, you were as likely to see a fork lift or a horse drawn cart driving on the streets as you were cars. 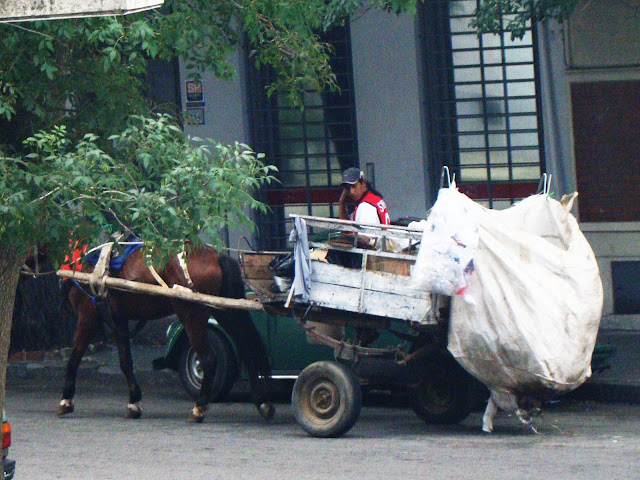 There is a strong contrast in architecture in this huge city.  Some of the older art deco & baroque style buildings were beautiful (although, some, not that well maintained). 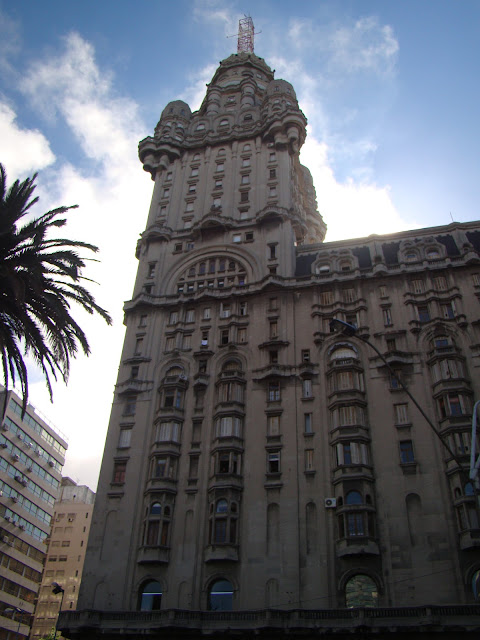 In contrast you would see some ultra modern buildings right next door.  Some were very colorful which caught my eye. 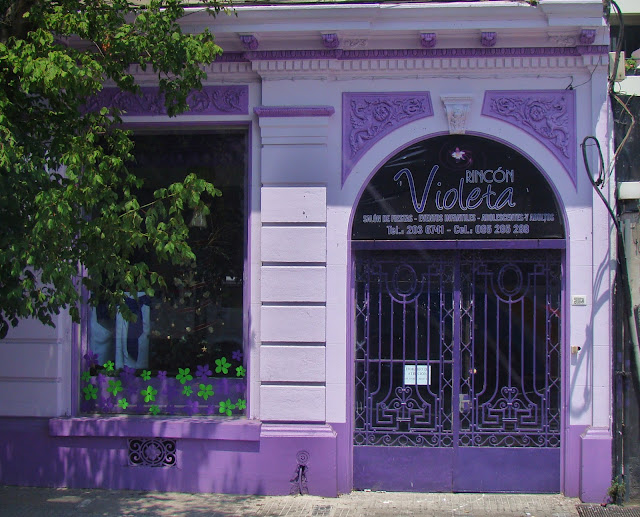 There was even one building that was part of a business complex (owned by an IT company) that resembled the Burj al Arab Hotel in .  An adjoining building resembled the hull of a ship. 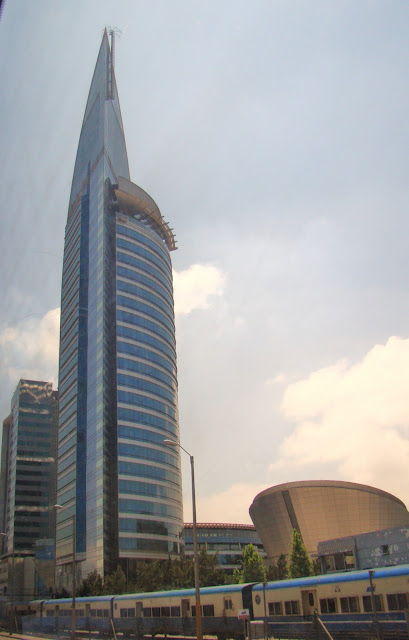 We drove through the old city area, then Independence Square & Constitution Square, down July . (their constitution day) to see the great shopping & museums there. 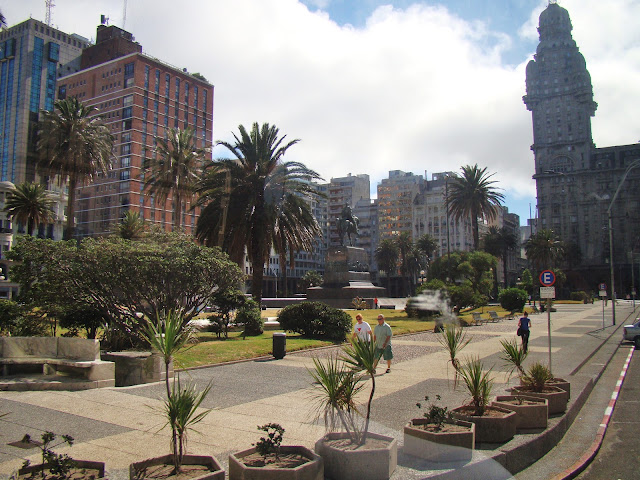 Independence Square
The city is full of sculptures & statues, of which they are very proud.  They’ve dedicated monuments to just about every historical person who ever landed here. 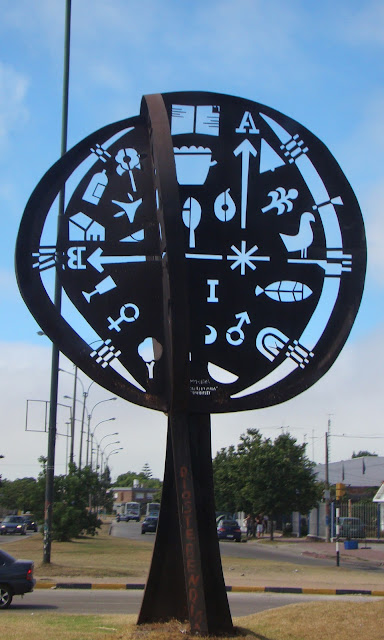 The Tree of Life & Time 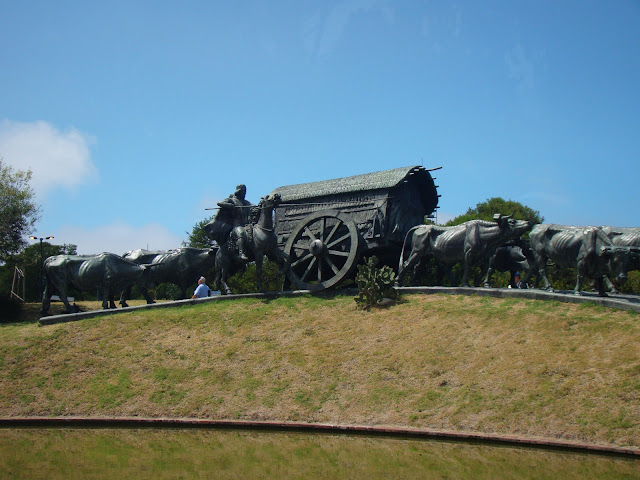 La Carreta (The Carriage): An ode to the ox-cart drivers of the 19th Century by Jose Belloni

We visited areas of town where the well to do had their summer villas. 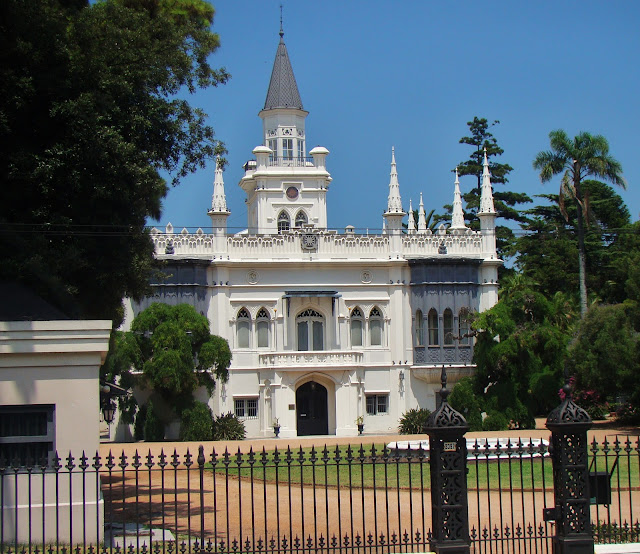 We passed several extremely wide beach communities that had mid rise condo looking buildings.  Tamara said they refer to these areas as “their” Copacabana Beaches. 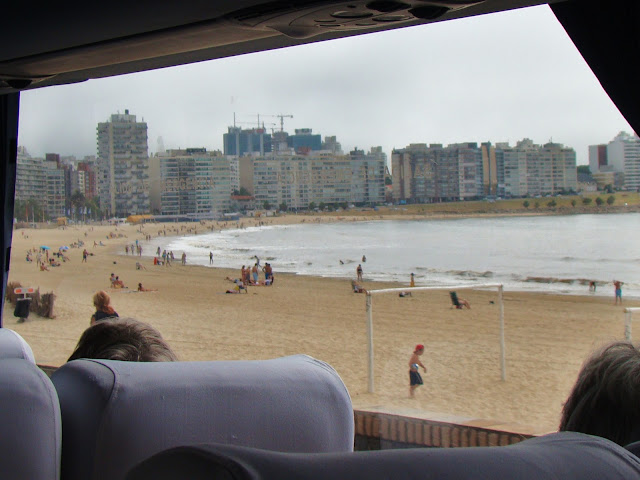 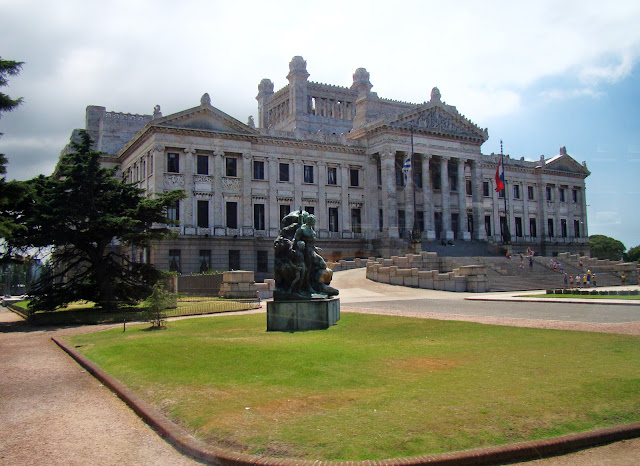 Parliament Building
IMO, the tour could have been 2 hrs. instead of 3; & some things should have been omitted.  We made 5 photo stops; 3 of which I felt were pointless (statues mostly).  I’m happy to say that I’ve been here; but I would never want to come back.
When we returned to the ship about 12:30, I took a few mins. to walk up the pier to look at the bow of the ship.  I wanted to photograph what appears to be damage that the hull sustained in the storms during the last cruise.  The Veendam certainly took a beating. 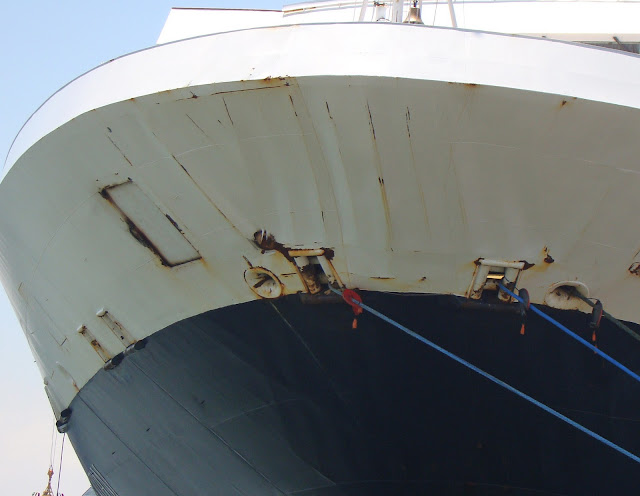 Once back onboard, I headed toward the Internet café to see Tony about my internet bonus mins.  He wasn’t at his desk, as he often isn’t during his posted hours.  So, I left him a long note with my questions.  Lou was working the crossword puzzle in the Library; so I sat & chatted with her a few mins.
Next stop, lunch in the .  Didn’t see the usual stewards; some of them must have had a few well deserved hrs off.  For my appetizer I chose some fruit, cheese, assorted smoked sausages & some grilled Mediterranean veggies.  I’ll say it again……whatever they marinate those vegetables in, I could drink that stuff. 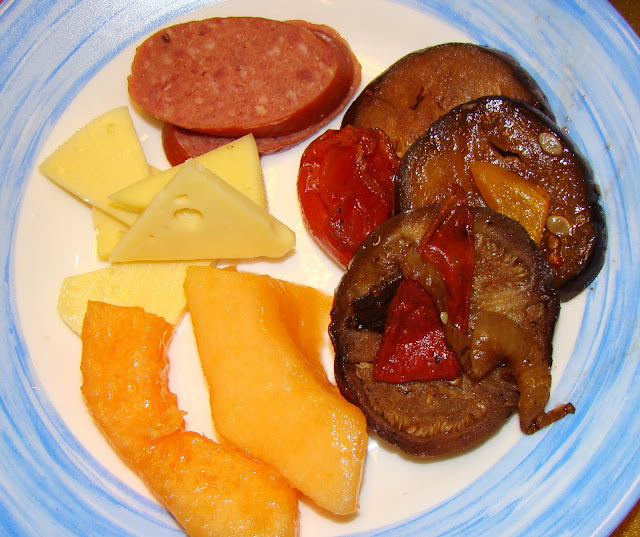 My main course was from the Asian buffet (which has never disappointed me).  I had a bowl of Thai style rice noodles topped with ½ Vietnamese lamb (nice & spicy) & ½ cashew chicken with veggies.  The bread pudding was the ‘no sugar added’ type today.  I tried it; & it was very good. 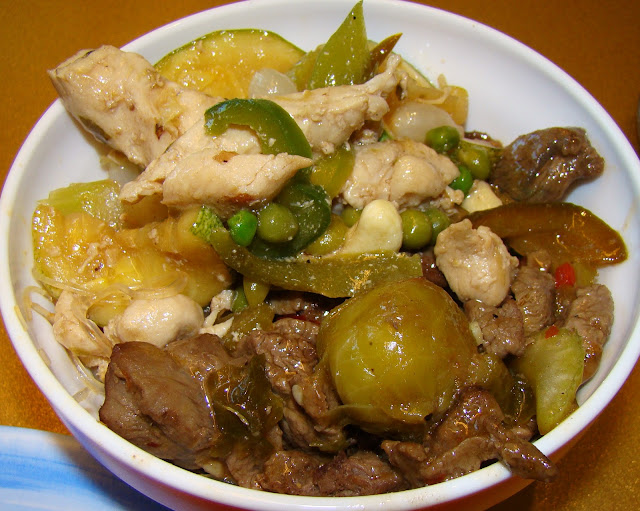 I could ignore the packing no longer; so I started on the ‘hot weather’ suitcase.  My hope was to pack so that anything I needed the next 2 days would be right on top of this one suitcase.  Maybe it was the satisfying lunch or frustration over the task at hand; I decided to take a break.  Actually, take a nap.  Ninety mins. later, things were much clearer; & I pretty much finished.  I moved the suitcase over to the sofa; so the stewards could actually get in to perform their ‘turn down’ duties.
About 7, I went up to the to have one last dinner with Lou.  Neither of us were even tempted to go to the D.R. for tonight’s “master chef” dinner (circus).  It’s usually at this point in the cruise where I become melancholy.  Sad to leave my new friends; & dreading going home.  But this voyage has been different.  The itinerary started off with a bang; & kept getting better & better.  After the , it was sort of anti-climactic.  Everyone felt it.  In fact, Lou said it would be fine with her if she had flown home today from .  The Antarctic experience is just so overwhelming; that it sort of takes the wind out of your sails. 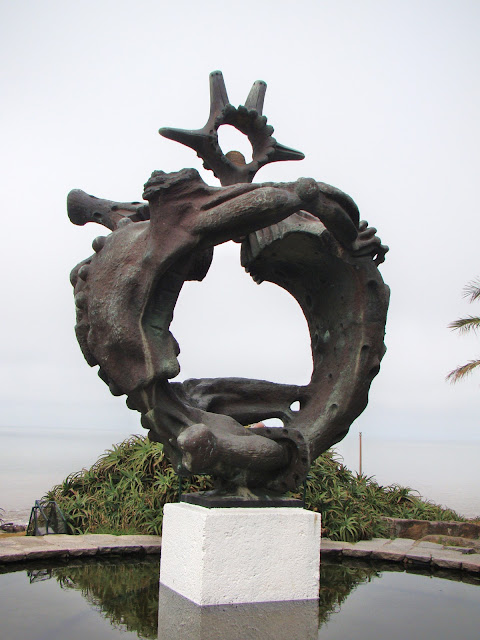 Sculpture dedicated to fallen sailors.  A sailor hangs on to his sinking ship guided by the north star.
I am sad to leave Lee Ann, Bill & (especially) Lou.  I’ve had some amazing conversation with them all.  Part of my readiness to leave the ship may be because the shipboard experience itself wasn’t what I’d hoped it would be.  It’s not what it was the last time I was onboard the Veendam, 12 yrs. ago.  She’s on her way “downhill”; & it’s very sad to see that happen to ANY ship.
Sorry, got off point there for a moment.  Back to the last “supper”…….something on the appetizer menu really excited me.  Baked brie in phyllo pastry; but there was none.  The one lone appetizer available, didn’t quite ‘speak’ to me.  But obviously the salmon & avocado got along quite well. 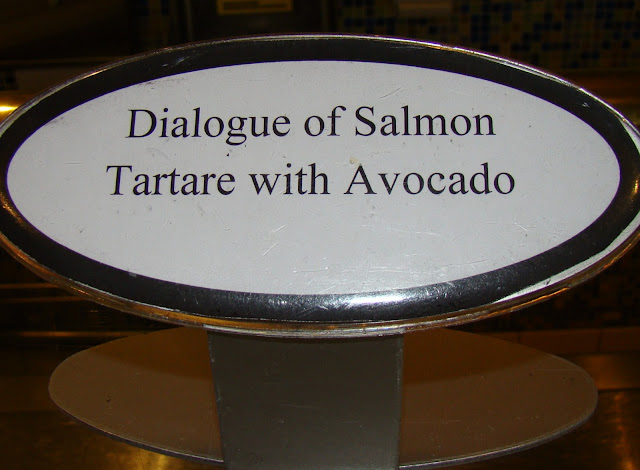 I started with a mixed salad & a cup of lobster bisque. 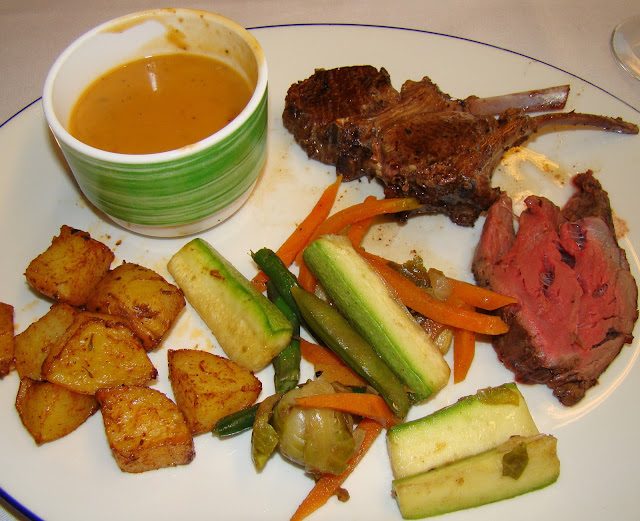 My main course was a few grilled lamb chops & a piece of nicely rare beef tenderloin.  With this I had some roasted potatoes & vegetables sautéed with garlic & lemon.
As we set sail the sun was starting to set; & the sky was flush with colors of orange & pink.  Lee Ann & Bill came to chat with us after they finished in the D.R.  Lou & I were just finishing dessert (fruit, cheese & mango chutney for me one last time).  Then it was time to say goodbye to the guys & to each other.  I will miss SOME of these folks very much. 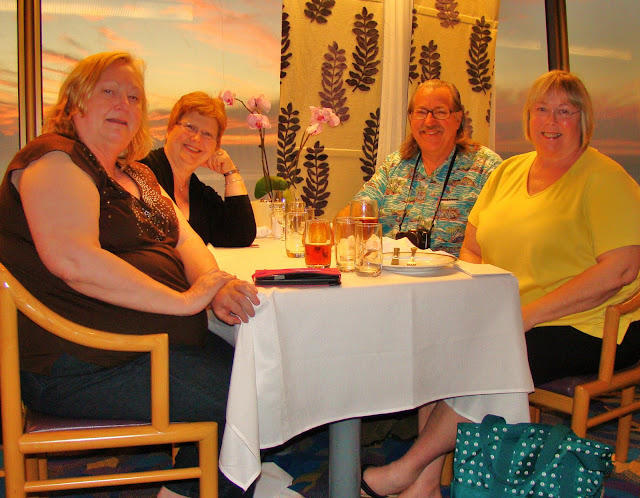 After dinner, I wanted to make one more sweep of deck 7 & 8.  Still had that free photo coupon, I hated to forfeit.  Even though it was free, there was none taken of me that I’d even want to claim (I did look kinda sickly through the whole thing, after all).  I didn’t realize that the set of videos that I ordered would be ready for pick up while we were still onboard.  I was under the impression that it would be mailed to us.  So, it was a fortunate coincidence that I even went into the photo gallery tonight. 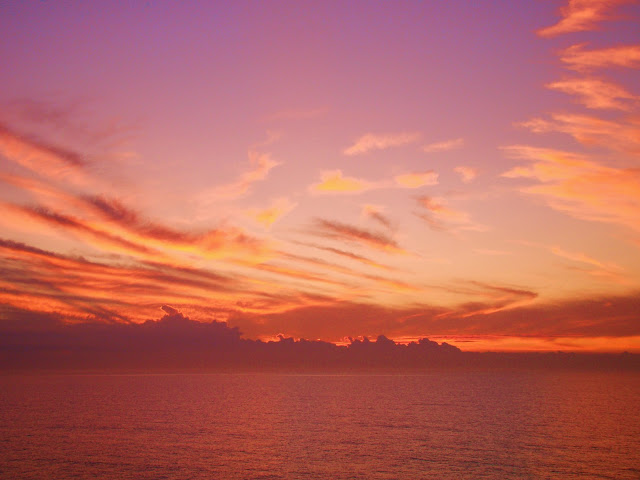 I stuck my head in the logo shop.  Maybe it was guilty feelings for walking around with an ‘’ thermal glass all this time; but I broke down & bought one of the “dam” thermal mugs.  Who knows if or when I’ll be back on HAL to use it.
My last stop was Mix (the bar) for my much anticipated “Yellow Tulip”.  I saw this drink recipe in the Mariner Magazine  a few months ago; & it intrigued me because it had lychee juice in it (& y’all know I love lychee).  I hadn’t realized this is actually a martini recipe, although they don’t serve it in a martini glass.  Man, this is one fantastic “adult beverage”.  It was lightly sweet; went down smooth & pretty fast.  Good thing I didn’t discover how good this was in the beginning.  I might have spent as much at the bars as I did on the internet bill! 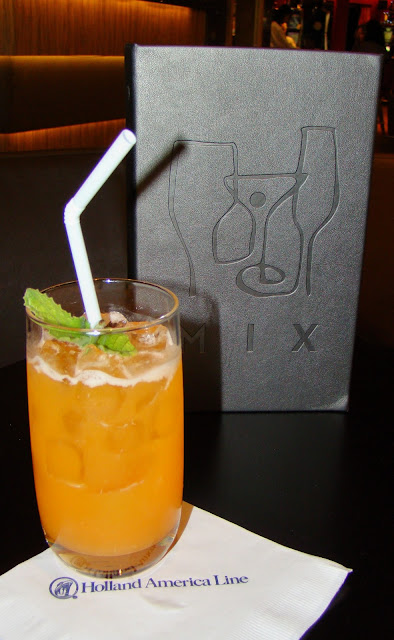 I was back in the cabin by 10.  Put a few last min. things in the suitcases; & put them out in the hallway for pick up during the night. I did a little work on the computer; & sent a few e-mails with my last 12 mins. of internet time.
I’m very tired.  It would have been nice if there had been one last night of rolling seas; but we’re still sailing in this very shallow bay & lake system.  is on the eastern shore of the ; B.A. is on the western side.  Basically, we’re just idling until morning.  I’ve got the alarm set for 8:30 (that’s the kiss of death already).  No TV or reading in bed tonight; I just want to sleep. 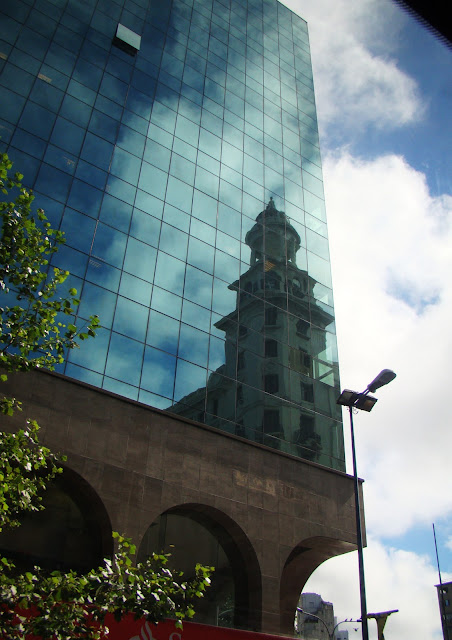 I missed the thrill of the food court & the luscious smells of cooking meat.  Thanks to my new friends, Noel & Lois Castle (Gaylordsville, CT) who supplied me with this photo of what I could have had to eat. 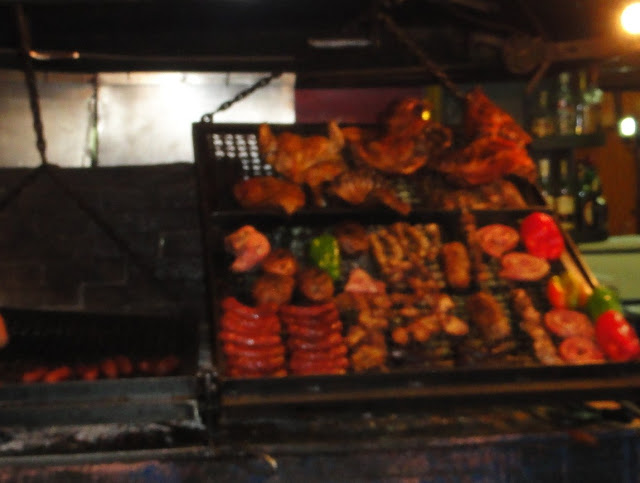