Sea Days
January 3 & 4, 2011
Monday
I think I could have literally stayed in bed all day.  I was so comfy; & had nothing important to do until this afternoon when we were to pick up our passports.  I didn’t come out of my cave until lunch time.  When I walked through the looking for a place to park, I saw Lou.  She was halfway through eating; so I got my plate & joined her.
I had some outstanding shrimp over Japanese Udon noodles (very spicy).  I also had a beautiful piece of John Dorry with a panko breading & some roasted potatoes.  She & I sat & talked for a long time about our penguin adventures yesterday.  She went on a privately arranged tour to Volunteer Point.  And from what it sounds like, they saw tons more king penguins than we did at Bluff Cove. 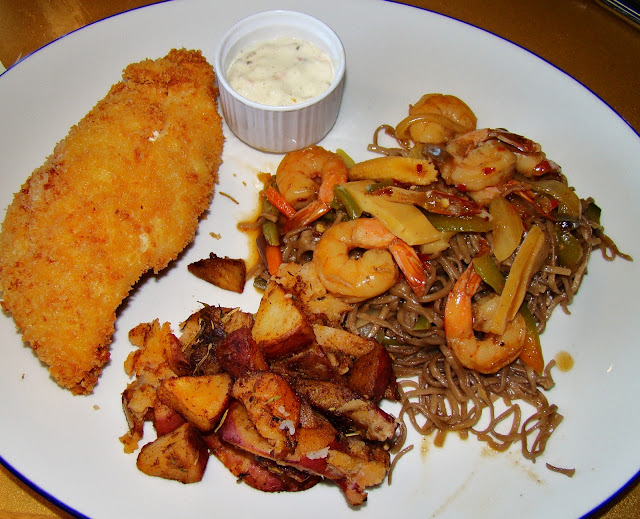 I had made a list of ‘chores’ for this afternoon.  I was given a certificate for a free photo; but I had yet seen one that I wanted (even for free).  So, I hit the photo gallery to look once again (still nothing).  And I wanted to talk with them about the DVD pkg. that they were offering for this voyage.  They had several to choose from, $35 each.  Or get all 3 for $70.  One is on alone; another is details of our South American ports; & the third is video taken during our particular voyage.  I placed an order all three.
My next stop was the Shore Excursions desk to see about post cruise tours in . They are offering 3; but I found they are only offered for disembarkation day (Thur).  I was looking for something for Fri, to help kill time between check out at the hotel & my late night flight.  They advised that I talk to the HAL Rep at the Sheraton when I check in.  If no tours are available Fri, they may be able to arrange a late check out.
A stop next at the Reception Desk to ask how my auto tipping will be divvied up to the dining staff.  Since I didn’t eat in the D.R. I certainly didn’t want my tips to go to a waiter & his asst.  I was told that I could designate the waiters; or I could cancel that portion of my tips; & give cash to them individually.  Since I don’t have that much US cash & because I don’t know the names of all those wonderful Lido guys……not sure how I’m going to handle this.  I suppose I can run around tomorrow; & look at everyone’s name tags; & write down their names.  I also asked what happens with my free photo ‘certificate’ if I didn’t find one to buy.  Answer is, I’d lose it; no credit value to my account.
My last stop was to pick up my passport in the atrium on deck 6.  I considered going back to the cabin & start packing all the cold weather clothes.  But I sat down at the computer & started editing penguin pictures instead.
I went up for dinner at 6:30.  This being the last formal night of the cruise, there were fewer people than usual eating in the .  I got my preferred spot by the plug.  I started with an assorted sushi plate appetizer.  For my main course, I had a nice, rare grilled tenderloin medallion, some grilled polenta, fried eggplant, roasted potatoes, & black beans with sautéed vegetables.  I grabbed 2 oatmeal raisin cookies to have for dessert later. 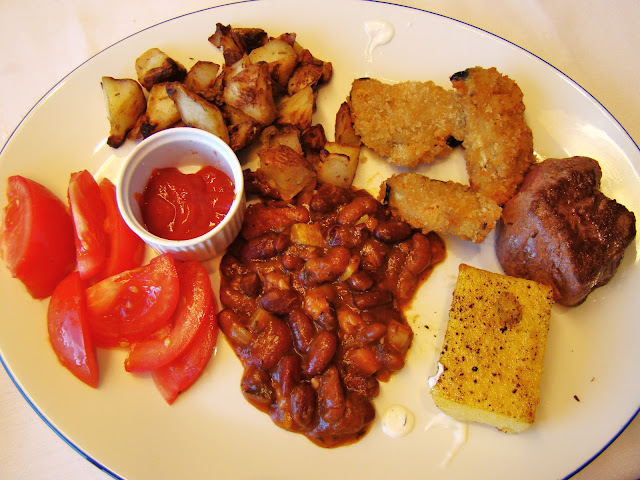 During dinner, several Pax spotted whales off the starboard side.  It must have been a pod of whales because we’d see one single whale ‘blowing’; & then 2 or 3 together, etc.  I guess it’s that time of year for those that do migrate south, to do so.
I sat in my usual spot for the next 6½ hrs.  The guys & I have it down to a ritual now.  I roll up the table cloth when I’m through eating; hand them the tea lights when they come through picking them up; & I put my feet up in the chair so they can vacuum under me.  I’ve told them to go on about their business; & just pretend like I’m not there.  They turn things around so that they’re ready for the late night buffet at 11.  The usual crew comes in; & eats dinner. Tonight there were quite a few groups of teens that were hanging out loudly, eating pizza until well after midnight.  And before he got off for the evening, Eka brought over a cup of chamomile tea to have with my cookies.  It’s usually hot chocolate; so why it’s tea tonight, I have no idea.  But he’s really a sweetheart. 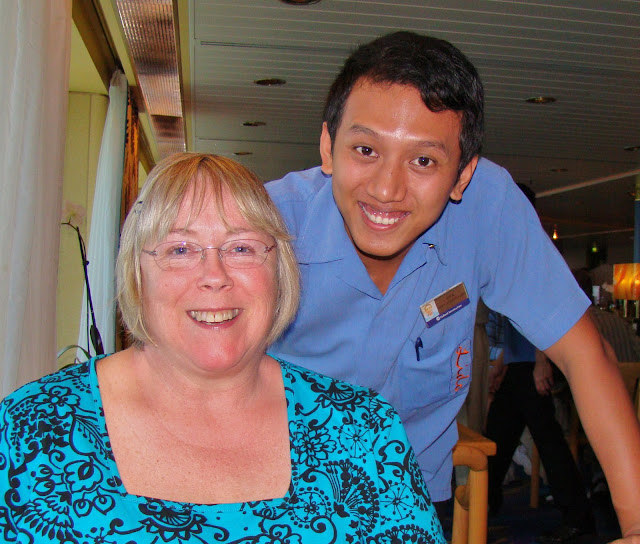 Just before I came down at 1 am, a crew person was taking down those (filthy) plastic light covers that I wrote about earlier.  He’d take down a few panels, disappear with them; & come back & put them up.  I don’t know what he was doing to them; but they didn’t look any cleaner when he brought them back.
I climbed in bed & tried to watch “Inception” for the 4th time.  Maybe it’s the small screen or maybe I’m just too dense to follow it.  I gave up & read until 2:30.  The ship was rocking nicely (oh, how I’ll miss that when I go back home).
Tuesday
I turned on the TV & saw the winds were over ; that explains the rougher seas.  You had to hold on tight in the shower.  I emerged about 11:15; claimed my spot on the port side of the restaurant.  After the initial opening rush at the buffet, I dove into my ‘brunch’. 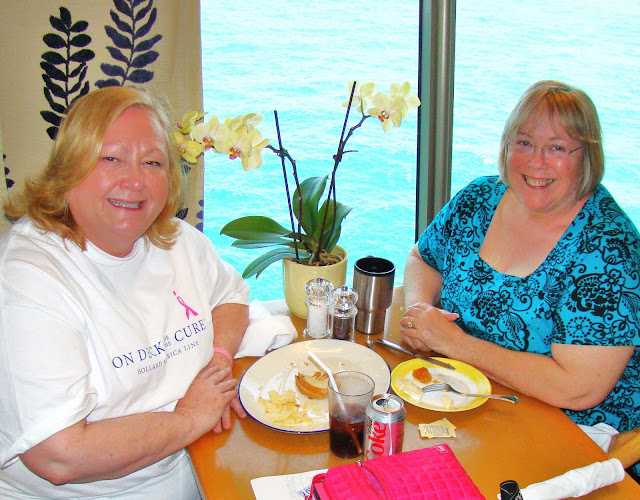 Lou joined me; & Eka was hovering close by (I think we’re in love).  I had a mostly Asian lunch of noodles; pork with black bean sauce; kung pao chicken.  With that I had some roasted potatoes & a taste of the beef roulade with red wine sauce (not so great).  For dessert I had a nice size plate of assorted cheese, melon & some Major Grey’s chutney.
At 1 pm we had our last Cruise Critic get together in the Crow’s Nest.  Only about 15 showed us this time; so there are many on our roll call that I never met (or if I did, I didn’t know it).  We talked about our favorite parts of this cruise; & things that irked us.  Again HAL set out cookies & coffee/tea for us.  But we were on the smoking side; & some of us didn’t stick around too long because of the smoke. 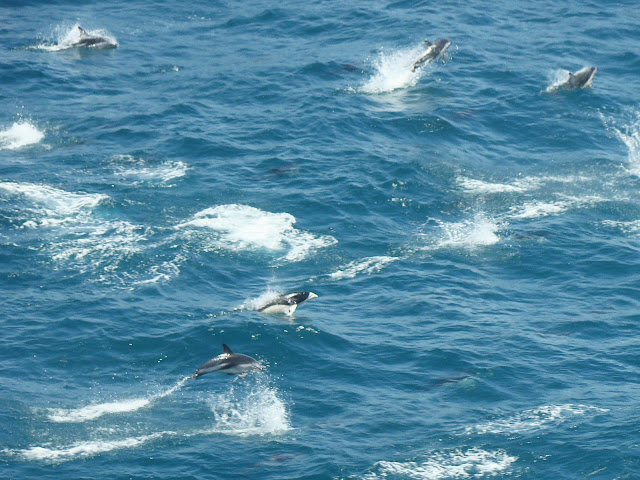 During our time in the Crow’s Nest, someone with a very good eye spotted some activity on the water right next to the ship.  There were about 2 dozen dolphins (& other questionable dolphin-looking type creatures) frolicking on our port side.  I thought one was an orca (albeit a small one); but upon closer inspection he/she had a pointy nose, but not dolphin like.  Maybe y’all will help me out on this one too. 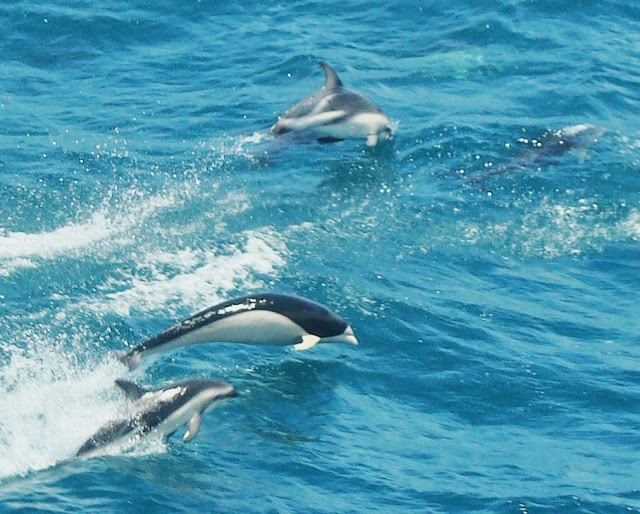 At 2:30 there was a 5k “on deck for the cure” (walk) for breast cancer research.  It appears about 2 doz. participated. 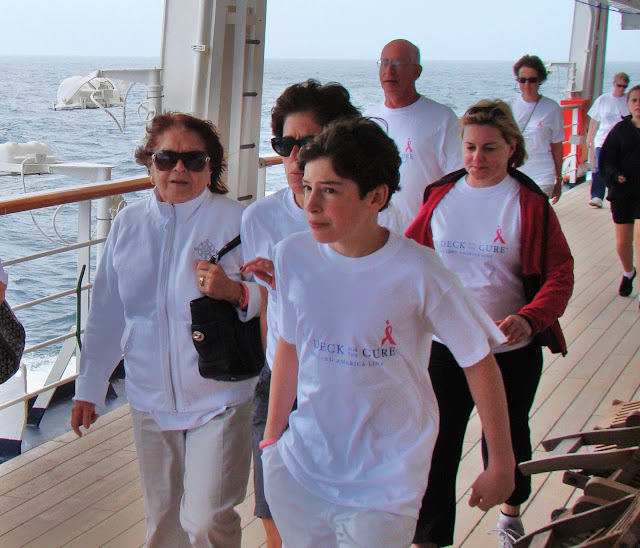 I went back to my cabin to start PACKING.  I thought I’d at least get the cold weather stuff in one suitcase.  I pulled out stuff from all the hiding places; & got so tired halfway through, I HAD to take a little nap.  I woke up about 6:30; & didn’t know where to start with all that mess.  So, I decided to go up to dinner instead.
Lou had already started eating before I got there; but she moved over to my table.  I was hovering like a vulture at a table close to ‘the plug” (just waiting for a couple to finish their 3rd cup of tea). 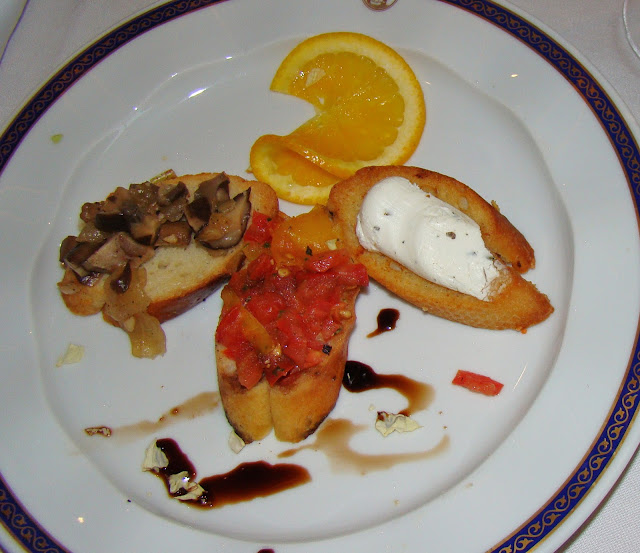 It was a pretty good dinner tonight.  I started with a crostini sampler; one with goat cheese & herbs; one with mushrooms & onions & one the regular way).  I followed that with a mixed salad. 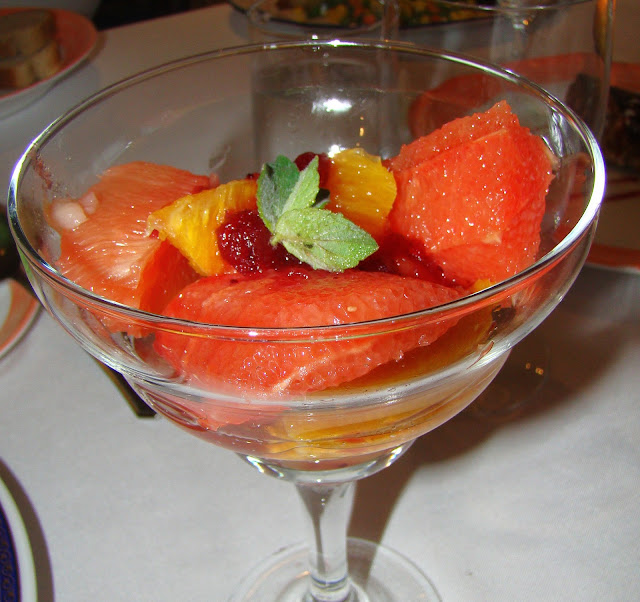 I had one of the deliciously prepared herb crusted lamb chops & a tiny piece of prime rib.  My pre-dessert was a delicious compote of mixed citrus fruits with amaretto.  For my real dessert I had the most decadent chocolate caramel toffee “thingy”.  In all my life, this if the first time I’ve ever had something that was just too rich to finish.  We may never pass this way again! 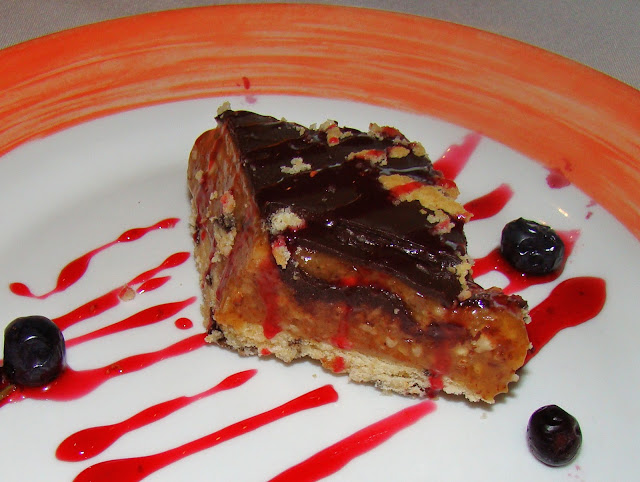 About 8:30 I was able to move over to my “plug” & work while the guys cleaned around me.  I wanted to get off a few e-mails; because tomorrow might be a little busy.  Our last port of call, .  It’s time to start getting melancholy.
PS:  The internet is lightning fast tonight at 10:45 pm.  Photos only took about 10 seconds each!!!
Posted by Unknown at 8:42 PM

What a great web log. I spend hours on the net reading blogs, about tons of various subjects. I have to first of all give praise to whoever created your theme and second of all to you for writing what i can only describe as an fabulous article. I honestly believe there is a skill to writing articles that only very few posses and honestly you got it. The combining of demonstrative and upper-class content is by all odds super rare with the astronomic amount of blogs on the cyberspace.

Anonymous......I am humbled by your critique. Thank you for the kind words.