,
Before I went to bed last night, I had been thinking long & hard about what to do with my towel animals.  I wanted to come up with something unique to amuse my stewards.  So…….I put the ‘frog’ on the desk; set a plate with silverware in front of him & wrapped a napkin around his neck. 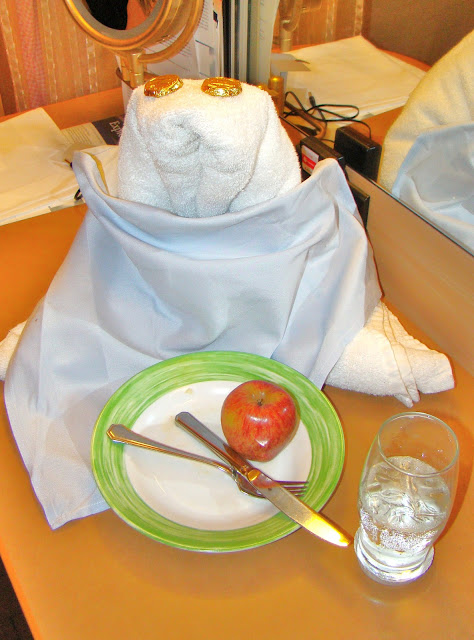 Then I took the ‘elephant’ over to the sofa; put my reindeer antlers & sunglasses on him.  I set him in front of the computer & put his ‘foot’ on top of the mouse. 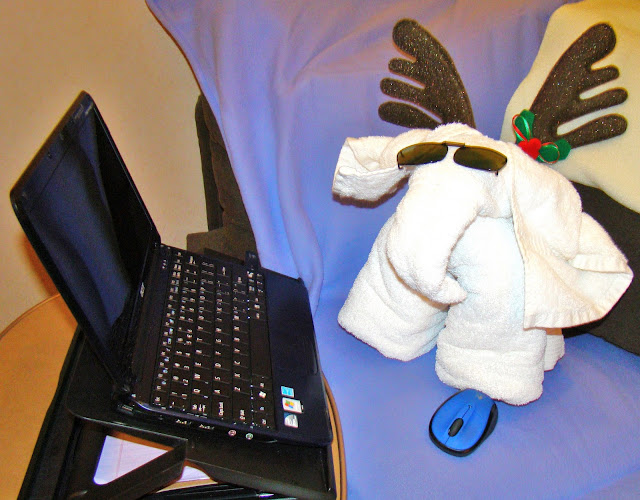 The regal ‘peacock’, I took to the bathroom; & set her on the ‘throne”.  I put a jeweled headband on her to mimic a crown. 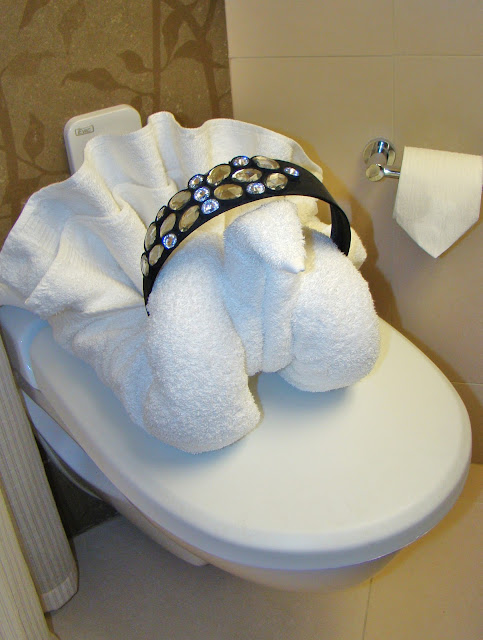 When he came by the cabin late this aft, he told me what a chuckle he got out of it.  Anything that gives joy to those who work so hard makes me happy too.
I had requested room service breakfast for 9-9:30; but was awake long before then.  The PA announcements about getting your tender tickets in advance started by ; & didn’t let up.  When the room service guy came in, he got a huge chuckle out of my towel animals.  I had scrambled eggs, sausage links, toast & juice for my breakfast.  I turned on the computer for a while before I left on my tour; quite surprised to find a pretty fast connection this morning. 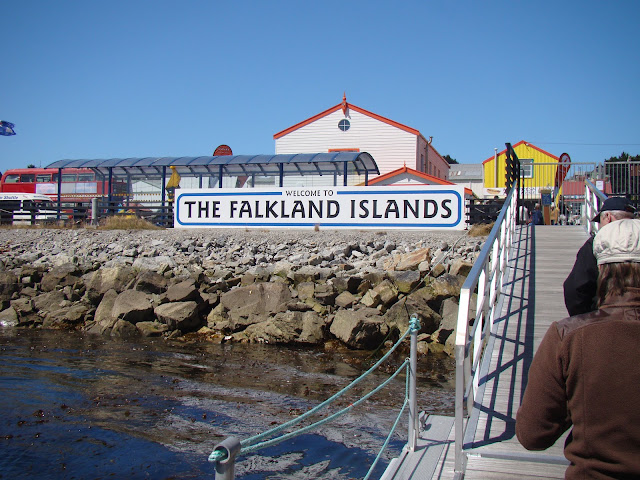 My tour was to meet in the showroom at for an departure.  When I got there at ; the room was empty.  The tour people told me to go on down; they were running ahead of schedule & a tender was waiting for me.  I was worried that I might have missed my departure.  But when we arrived at the tender pier, I learned that the tickets had the times all wrong; & that the bus wouldn’t pick us up until .
I had time to walk down part of the main street (); & take some photos.  There is a lovely church, the Christ Church Cathedral.  Next to it is was a park, with gorgeous blooming flowers & a huge arch made of whale bones. 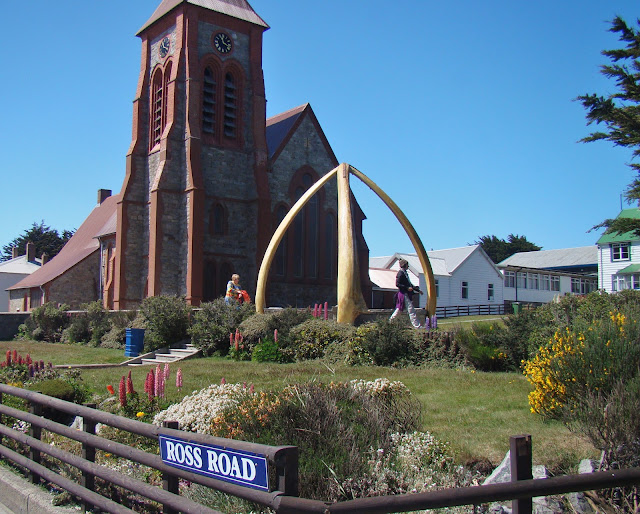 The town of is quite lovely; very small with the houses painted various bright colors.  Most people take pride in their yards, planting beautiful flower beds. 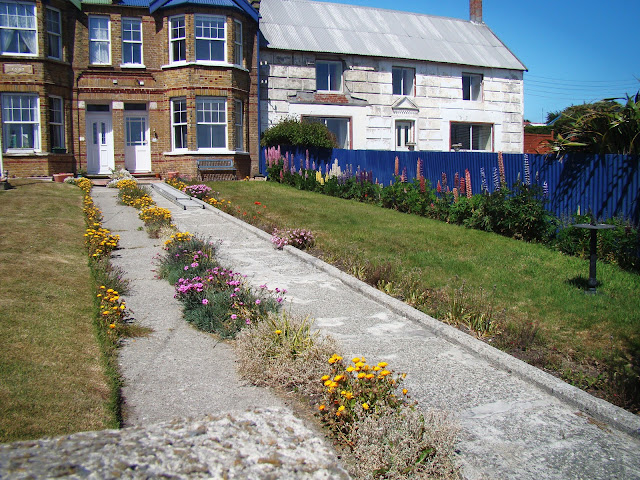 There is one tall, spiky flower that I keep seeing down here that fascinates me.  I’ve asked everyone if they know what it’s called.  So, far no idea…..so any of my blog readers, chime in here if you can enlighten me. 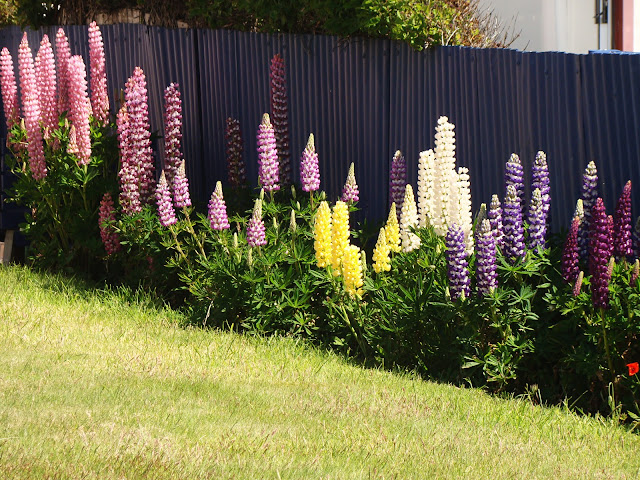 Being a Sunday, the town wasn’t exactly buzzing with activity.  Being a small town, overrun with Veendam Pax, though it’s hard to tell if this was a normal Sun. or not.  There was a small food stand right at the tender pier that was frying up burgers for those who were going to be missing their lunch.  There were several gift shops open; & local families pushing strollers out enjoying a gorgeous summer’s day.  Temps reached the mid 60’s; & it felt good not to be shrouded in coats & scarves. 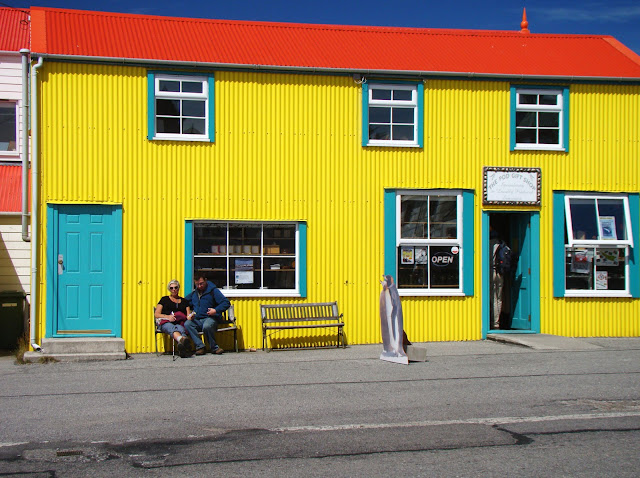 I was assigned (group 24 white) to a 16 seat van with John Rowland as the “guide”.  We had been warned that in some ports our mode of transportation MIGHT not be up to the standards that we would expect.  After traveling on their road system, I can understand why vehicles look like they’ve been run ‘through the wringer’.  The seating in our van was cramped (to say the least); & very warm.  We tried to open our window; but it was locked shut.  Only one on the other side would open; & I think we would have stifled to death if it had stayed closed.  The PA system kept cutting in & out; so we only heard about every 10th word that John said.
The roads are mostly gravel; so dust flies everywhere.  All along the roads you would see barb wire fences that had small red signs every few feet.  This clear warning is a reminder that  there are still thousands of land mines buried in the terrain.  This from the conflict with the Argentineans.  The guide said (if I heard him correctly) that the mines would be considered active for up to 200 yrs? 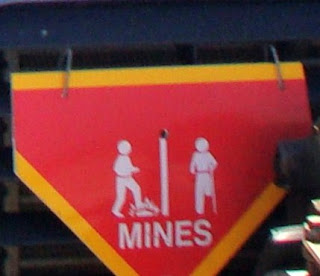 We passed tons & tons of granite boulders that made up ‘rock runs’.  During the time that glaciers carved out these mountainous areas; the after affects were flowing rivers of rocks that remain where the glaciers once stood.  There is not a lot of vegetation out here; mostly small wild ferns (ranging from green to yellow/orange) & the diddly-dee berry indigenous to the region.  What appears to be grass is really short, thick moss covering the dark (peat) soil. 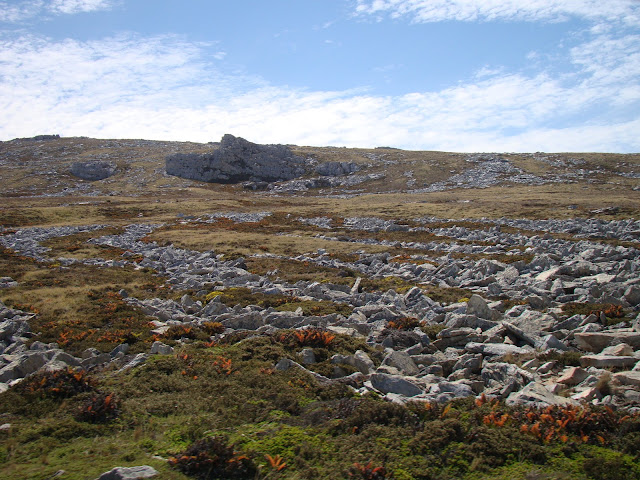 We traveled by van for about 20 mins. to an “off the side of the road” meeting spot where we transferred to 4x4’s.  The van could be considered almost luxurious compared to the 4x4 experience.
I rode with Ralph; me in the front seat; & three other (much smaller) people WEDGED into the back seat.  From this point we trekked across a sheep (3,000)/cattle 150,000) farm.  The only visible ‘path’ was tire tracks in the sometimes muddy bog, left by the jeeps that had made the trek earlier in the day.  I think Ralph drove in 1st gear, nearly the whole way.  We passed small herds of cattle & then sheep. 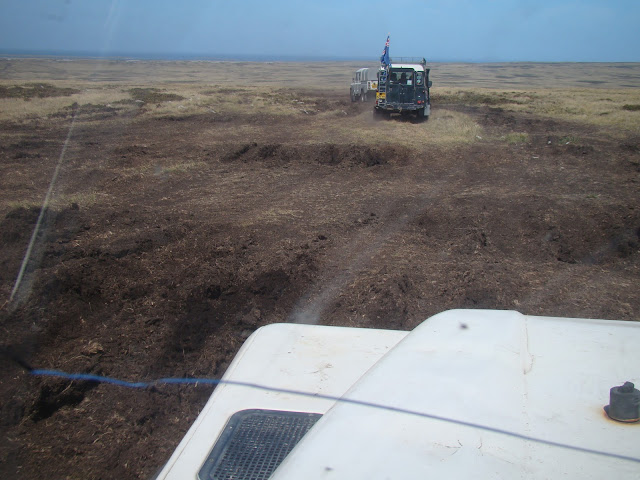 Ralph was quite a bit younger than some of the other ‘guides’ that I saw today.  Most are retired & do this for fun, using their own vehicles.  (I can just imagine the joy of some of my southern male friends actually getting paid to go off roadin’.)  Ralph normally works for the government, building roads & maintaining the equipment.  He says, there’s nearly no unemployment in the ; & that lots of people have 2 or 3 jobs.
After a thrilling 20 min off road experience, we reached the Bluff Cove Penguin Rookery.  There we were met by Joan, who explained the different types of penguins & birds; & how WE should behave in their habitat. 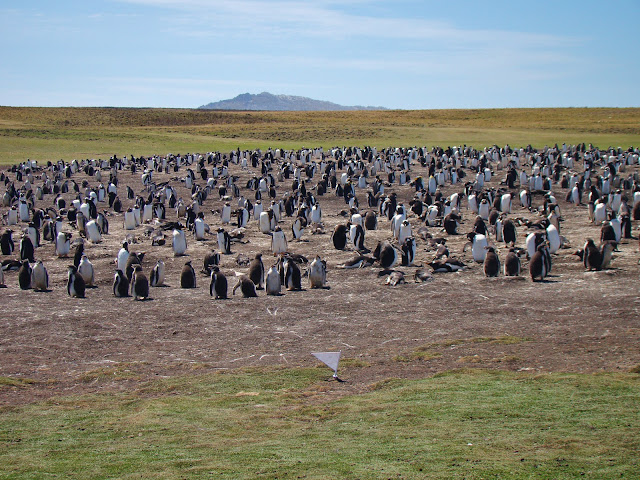 We had a little over an hour to walk around the 3 ‘colonies’ on this farm.  One large cluster of Magellanic penguins had 7 huge king penguins huddled in the middle (as if to hide from the ‘paparazzi’).  They were certainly easy to spot.  Not just their size, but the fact that have bright orangish/yellow throats.  They look & act rather ‘kingly’. 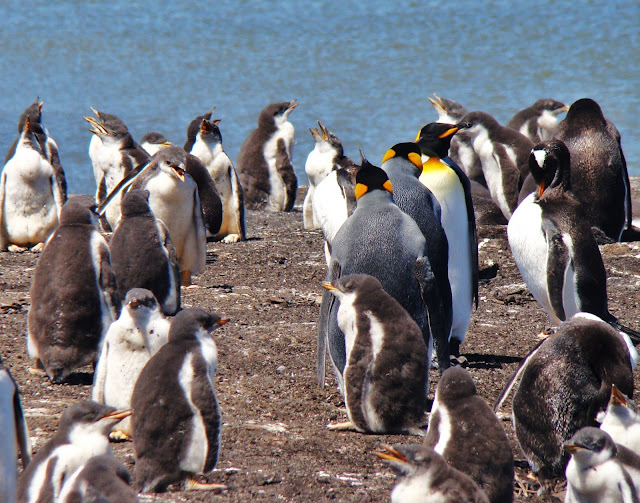 I saw lots of adorable baby chicks in the larger cluster.  Up the hill was a smaller cluster of Magellanic & Gentoo penguins.  It didn’t appear that they were segregating themselves; occasionally a few would walk right in front of us going from one cluster to the other.  I sat on a bench for a while to watch them; & all of a sudden the wind shifted directions.  I was down wind of the colony.  The stench was almost nauseating,  I had heard how badly penguin poop smelled; but I had been spared up until this point 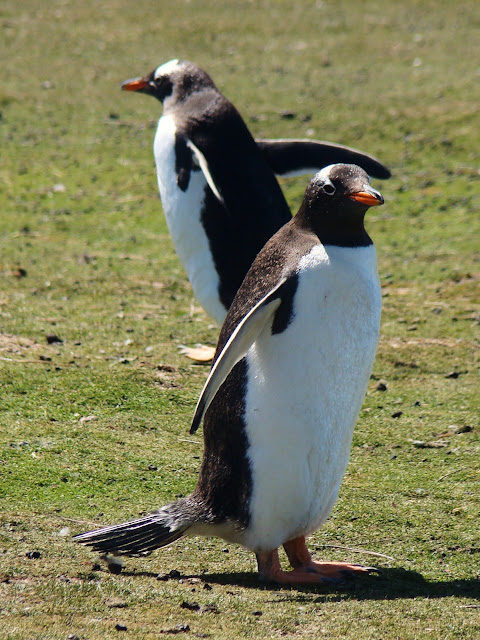 We were prodded to move along the path over toward the beaches so we could see another group of Gentoos feeding & playing in the water.  They have a beautiful pinkish sand beach on which to sun bathe.  I could have parked myself somewhere on that beach & watched them forever. 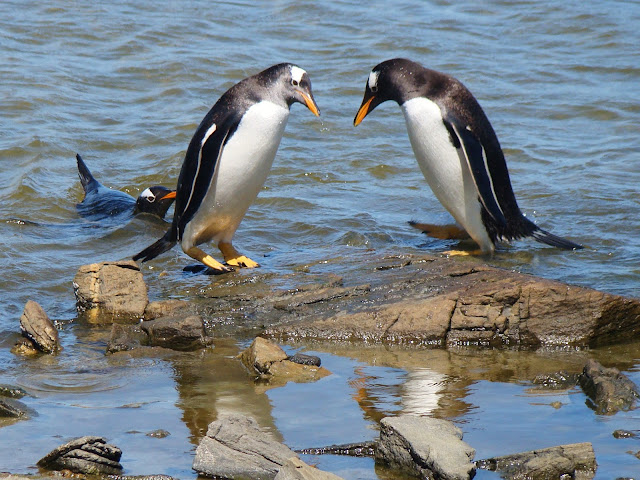 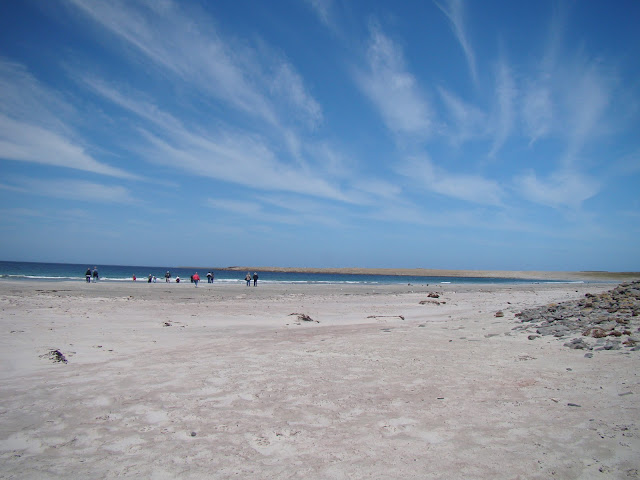 Reluctantly, I walked toward the Sea Cabbage Café & a small museum next door.  We were to wait there for Ralph to pick us up.  The ride back was just as treacherous.  In the front seat, the only way I found to stay planted in the seat was by pushing my feet hard against either side of the floor board.  It was as tiring as a physical workout.  When we got back to the tender pier that was a very long line of Pax waiting.  So, I walked back down , going a little further this time searching for some diddle-dee berry jelly.  I thought that would be the perfect souvenir gift I could bring back to a few friends.  Ralph said not to bother looking in the grocery story because all the locals prefer to make their own.  He thought my best bet was in a gift shop; but there was none to be found.
Defeated & getting hungry, I was able to get on the tender.  I was relieved to see that they had kept the restaurant open (limited service however) for those who had been away on tour.  It was ; & I had the urge for some taco salad.  So, I got the greens from the buffet; & then went out to the grill to get the taco making stuff.  I made this humongous plateful; & was stuffed to the gills when I finished. 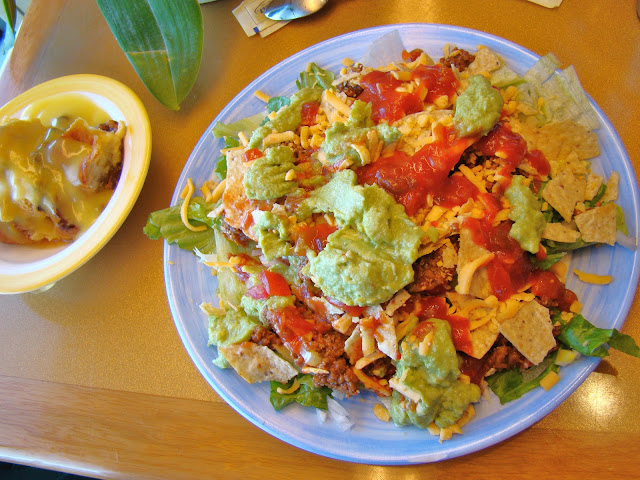 All of a sudden I felt really tired; & slightly feverish.  I did not know until later that I was sunburned around the neck opening of my blouse, thus the feverish feeling.  I went back to my cabin; spoke briefly with Lee Ann & Bill about their penguin tour to Volunteer Cove.  By , I was under the covers & in for the night.  I thought I might come around later & call room service for a late night snack; but that didn’t happen either.  I was just worn to a frazzle.  Thank God there’s 2 sea days coming up to recover!
Posted by Unknown at 9:49 PM

The tall, spiky flowers are what we in or from the UK know as Lupins. Not sure if you Americans know them by another name or if they are just not grown in N. America..

Have thoroughly enjoyed following your blog - thanks for taking the time to do it..

As soon as I read 'lupines', a little light bulb went off in my head. You all are correct. Thank you so much for solving the great mystery of the day!