Cruising
Northwestern coast of Antarctica Peninsula
Sunset: – :  2:45 am
In all honesty, I failed to write this blog entry until Jan. 1st.  I got so far behind with photo editing; & the internet has been totally unreliable; & I was feeling puny then.  I wasn’t able to concentrate on anything; I was just totally caught up in the thrill of that first day cruising in Antarctic waters.  Therefore, I’m going about this in a totally unorthodox way.
In the days that followed, I took hundreds & hundreds of photos.  When I look back on everything I saw in those 3 days (Dec 29-31), I would bore everyone to tears with rambling descriptions of every berg, snowflake, penguin.  It was all so overwhelming & almost life altering at the time.  I’ll just let these pictures speak for me.
As you can see from the bridge camera on TV, it doesn’t even get dark after the sun sets. 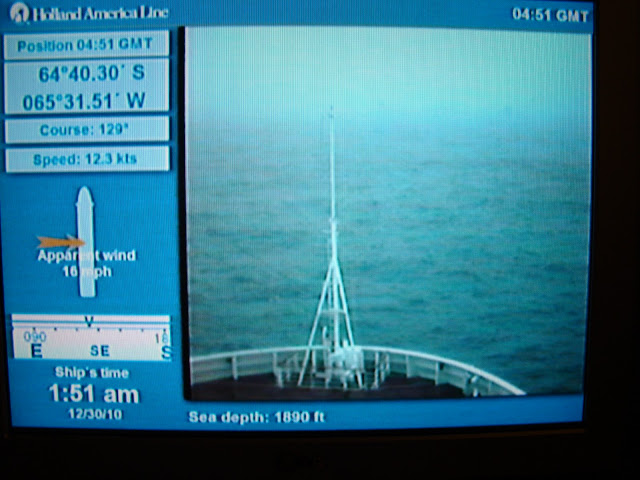 As has happened in the days since, the Capt. continues to alter our route to make the most of the weather conditions.  We sailed through Lemaire Channel, in between the mainland & huge volcanic peak ‘islands” to the west.  The snow was beginning to melt on most of the mountain tops; but heavy, thick blankets of snow clung at the base near the water’s edge.  It was another, grey misty day where we saw a little wildlife; very few bergs. 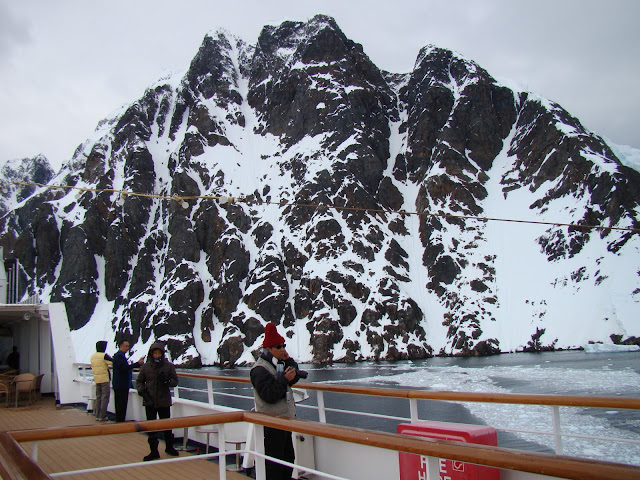 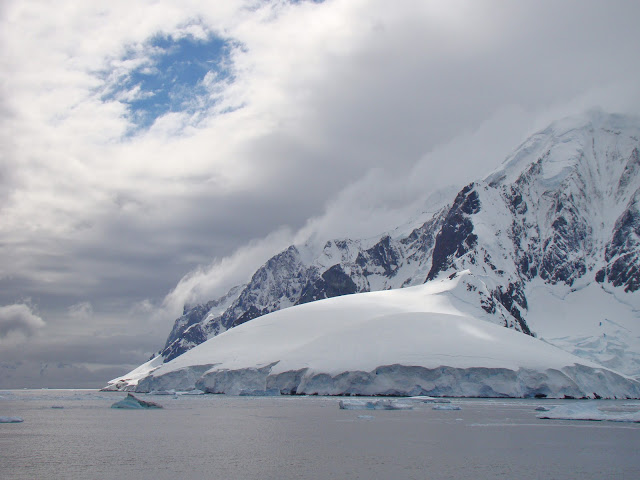 Most of us on deck have gotten a kick out of this guy’s fuzzy hat.  He’s probably a lot warmer than any of the rest of us. 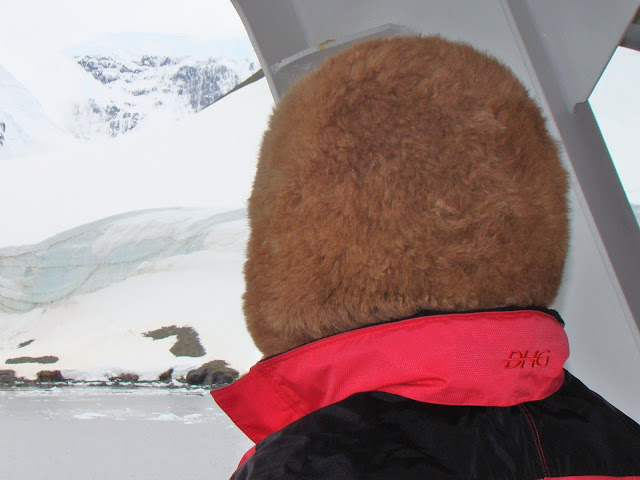 Layers & layers of snow are beginning to crack.  When you least expect it, a loud cracking sound breaks the silence; & huge chunks will “calve” & hit the water making a sound similar to thunder. 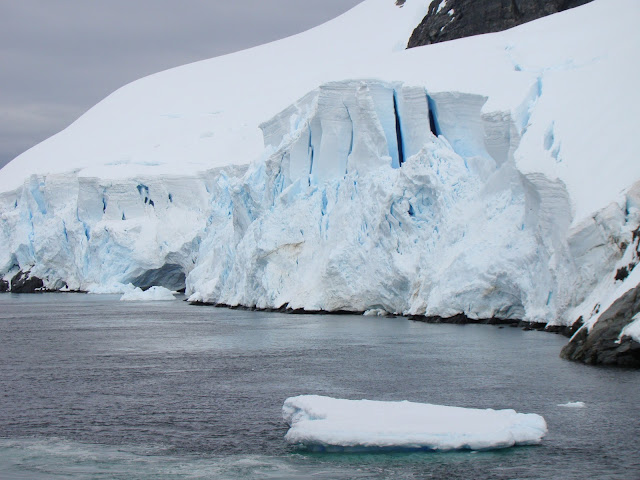 Not sure what makes these beautiful blue ‘caves” in the snow bank; but they’re everywhere. 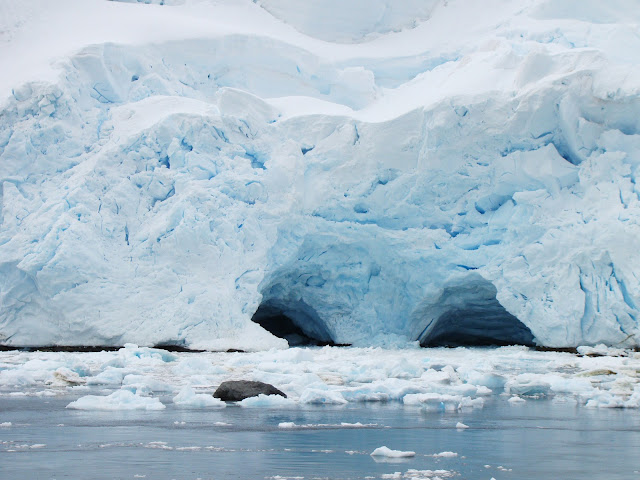 Only half of my lunch was photo worthy today.  I had some delicious cheddar cheese soup.  From the salad bar I chose some asparagus & black bean salad; grilled beef & bell pepper salad & a spicy Thai beef salad served in a cute orange ‘boat”. 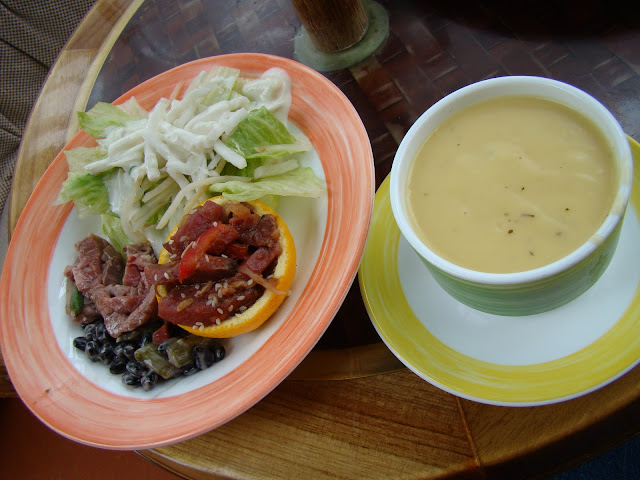 Another highlight of our day was having a dozen scientists from the Palmer Station come onboard for some Q&A & R&R.  Palmer Station is an American funded research station that employs 44 people (fewer during the winter season).  It is located on Anver’s off the NW tip of the .
Whenever a cruise ship comes into this area, the lucky few (decided by lottery draw) come out to the ship in their zodiacs & board the ship for about 18 hrs.  During that time they mingle with the Pax & answer questions; enjoy the entertainment & food (fresh fruits & veggies which they see very rarely).  The group gave 2 lectures during the afternoon hours, that were fun, informative & very well attended.  Most of us had no clue what the benefits would be of studying the plant & animal life in .
They are not allowed to go beyond a radius of their encampment (for safety & rescue purposes).  One of the many things they are trying to unravel is the mystery of an Antarctic fly, that actually freezes during the winters; & is able to revive & regenerate it’s own body systems in the summer.  I can’t make it sound as important as it really is; but to hear then talk about their work so enthusiastically, it’s fascinating. 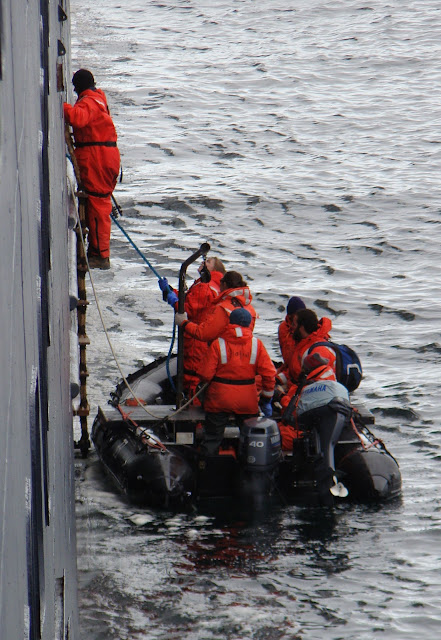 When the time came for them to leave, I watched their rather frightening & precarious departure.  They each are tethered with various ropes; slowly climbed down 6-7 ‘steps’ of a rope ladder flung over the side of our ship & jumped down into the 4 zodiacs that they sent out to pick them up.  I’m pretty sure they left with “parting gifts” (probably food).  We held our breath until each of them made it down safely.  As they pulled away the Capt. saluted them with toots of the horn; & they were waving goodbye. 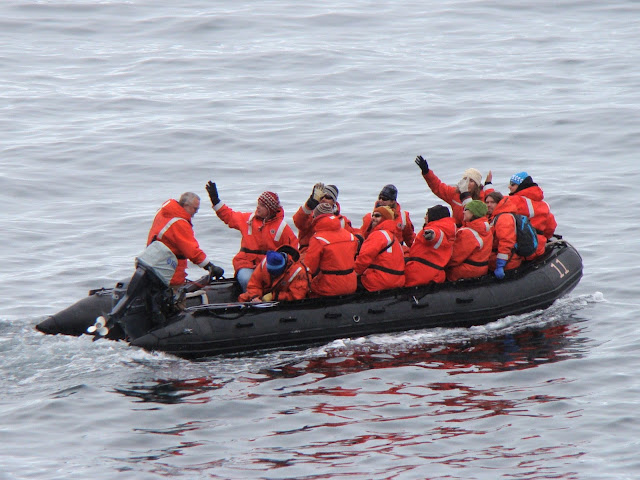 Dinner was almost as lackluster as lunch.  I was tired after all the day’s excitement; so I got a small sampling of 2 things from the menu to take back to my cabin.  The lamb loin en croute (boneless lamb wrapped in phyllo pastry) was fairly good; but the eggplant parmigiana (was almost a joke).  They took slices of eggplant that had been battered & fried & layered that with a slice of cheese & repeated the layers.  The cheese wasn’t melted; & it barely resembled the classic Italian dish.
After a few bites, I was done with that; & called room service.  I ordered a cup of French onion soup & a tuna melt sandwich.  The soup was delicious.  Can’t say that I’ve had a tuna melt sandwich on rye bread before, or with cheese that was not ‘melted’.  The potato chips were sort of damp.
A little after I stepped out on deck for one last look; & the sun was trying to peek out from behind all those clouds.  This was as much sunshine as we would see in 4 days! 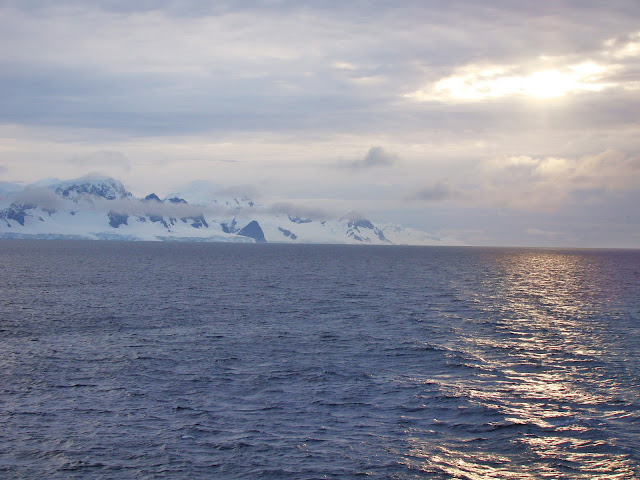