Cruising the Wilhelm Archipelago
Northern tip of the
Sunset 12:03 am tonight – Sunrise: 2:28 am tonight (2 hrs & 25 min later)
The seas kept a nice easy rocking motion all night; perfect for good sleep.  And thankfully the “drugs” are beginning to work, less coughing.  Yea!!! 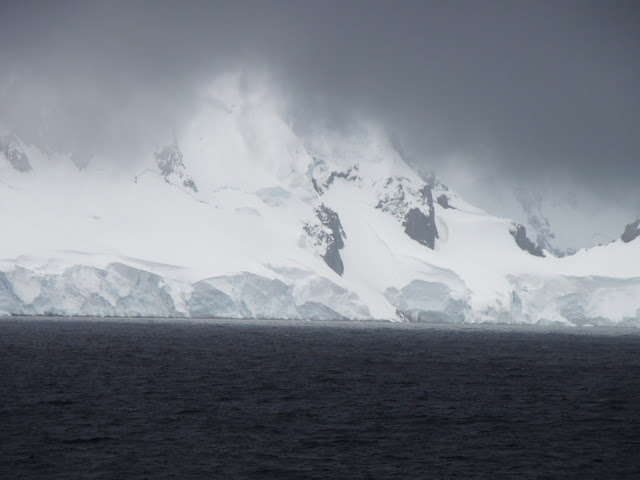 I could see on the TV map that we were cruising past the at ; & I had to step outside to see.  Wasn’t much to be seen; just a lot of fog.  The winds aren’t strong; so it doesn’t feel bitterly cold (39 degrees).  The C.D. came on to tell us that “due to the snowstorms in the northeast”, we were experiencing satellite interruptions.  We did have internet part of the day yesterday.  We had CNN & Fox News last night; but no internet.  Today we’ve got none of the above.  I’m no techie; but is it the ship’s position; or is the weather REALLY influencing the satellite?  Early on, I had questioned internet reception this far south; & was told that it wouldn’t be a factor.  I’m sure one of my C.C. friends will chime in on the message boards after they read this, & answer this all important question.
The Mariner Society Brunch was held at in the main D.R.; & I thought I’d take at least one meal in there.  I sat with three couples; small chit chat.  Didn’t pick up any important HAL scoop.  But the menu was quite good.  They were offering free champagne.  I started with a mixed green salad with chickpeas, tomato, a nice size grilled salmon filet, drizzled with orange olive oil dressing (outstanding).  The alternative choice of appetizer was apple gazpacho with lemon sorbet??? 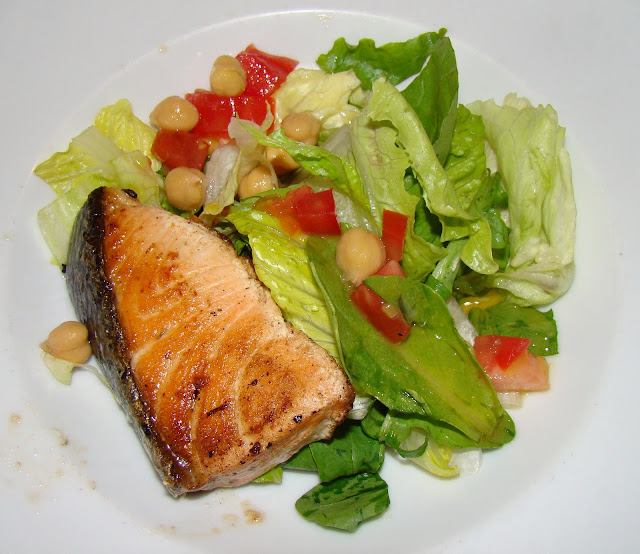 My main course was braised beef short ribs with garlic cloves.  This came with mashed potatoes & julienne carrots.  Some at my table had the broccoli/cheddar quiche with orzo pasta, savoy cabbage & grilled tomato.  The third choice of entrée was butter basted filet of trout with yellow rice & roasted basil flavored diced tomatoes. 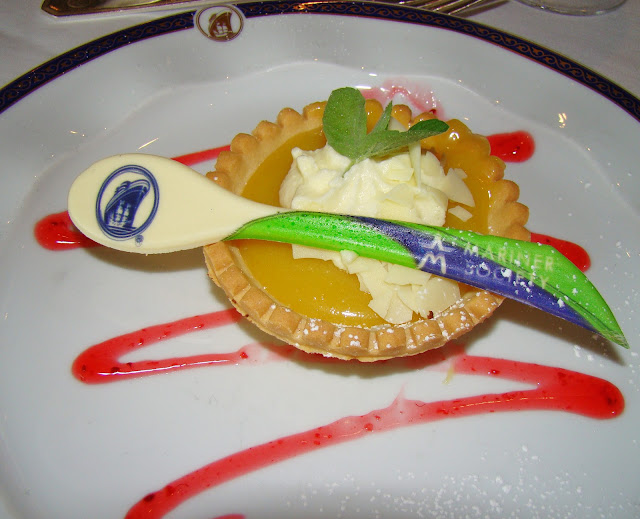 For dessert we had a key lime & vanilla chocolate tart.  Actually the tart was key lime; & they used the white chocolate to mold into a spoon with the HAL logo airbrushed on it.  During the presentation the Capt. said he had been expecting to see icebergs by ; but that the wind blowing from behind the ship was pushing any ice further ahead of us.  The dense fog was a result of the sea water being so much warmer than the air temp.  He promised that they’d keep searching every nook & cranny until they found ice, whales & penguins. 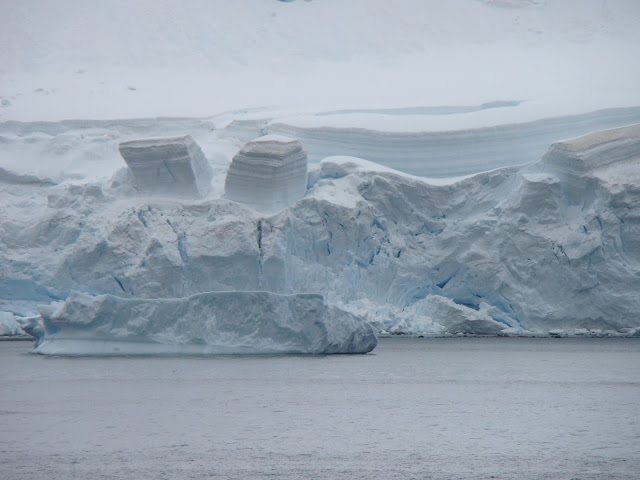 About , I ventured up to the Crow’s Nest (forward observation lounge); & it was packed.  The 2nd officer had set up a chart desk & was showing us where we had been; & where we were planning to go.  There was a plan A, plan B, etc., etc. until they could get out of the fog & find some scenic cruising.  He also told us that very late tonight we would be picking up about a dozen scientists from Palmer Research Station , who will be onboard to answer questions about the area & enjoy a little R&R (for about 18 hrs).  They will tender out to the ship in zodiaks & climb up a rope ladder & come onboard.  It got quite noisy in the Crow’s Nest; & decided I liked the view from deck 6 promenade even better.  The plan being that I could run into my cabin & warm up in between islands.
Around , the party really got started.  I’m sorry I can’t tell you the exact locations when things started to get interesting.  The info coming over the loudspeaker was a little garbled; & I had nothing to write on at that time.  The icebergs started small; & kept getting bigger & bigger.  Every once in a while, we’d spot a whale.  Every few minutes they’d announce something to see on the port side; & then the starboard side.  But it’s so easy to move from one side to the other when you’re at the stern.  There are a few benches back there; & you’re protected from the wind.  IMO, that’s why a deck 6 aft cabin was a prime location. 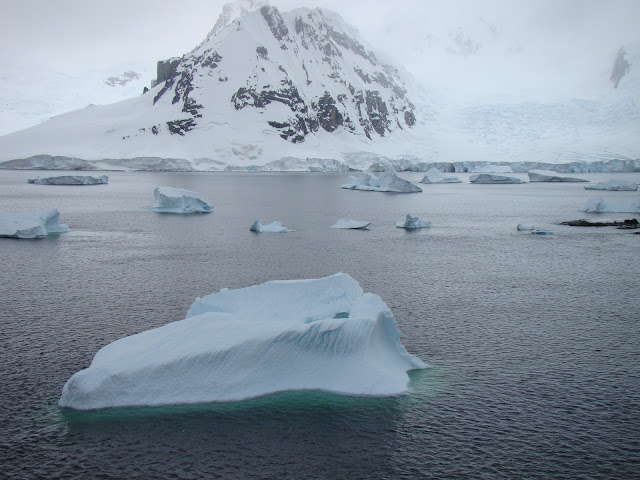 As if all this wasn’t exhilarating enough, then it started to snow.  Blowing sideways, some flakes looked like small cotton balls.  For the next 4 hrs, it went from blowing snow to just fine misty rain.  Even though it was still grey, the fog had lifted; we were sailing so close to these massive snow covered islands & ice floes that you could almost reach out & touch them.  I’m glad I had my head & face under 2 layers (ski mask & scarf/muffler); because I was walking around with this goofy grim on my face.  I was just giddy to see snow. 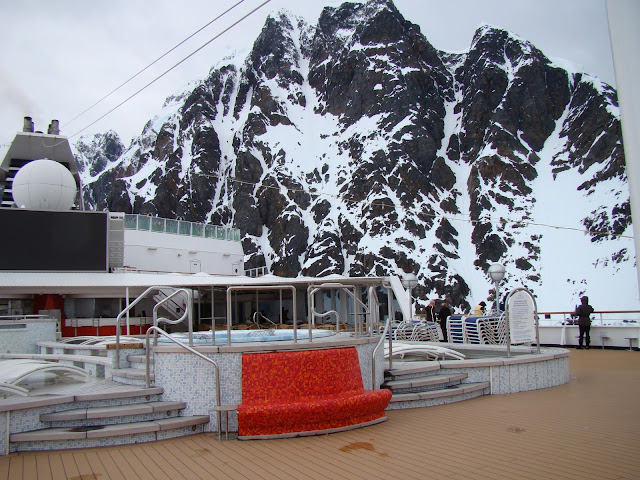 About , we sailed slowly toward , where they promised we’d see lots of Gentoo penguins nesting.  This is the largest of the penguin species.  I didn’t have my binoculars on me (although I did bring them this time); so all I could see was with the zoom lens on the camera.  I will hope that I can zoom & crop in the editing process to see what it was I actually saw.  There were probably a hundred various sized icebergs in this channel; some you could tell sat extremely deep in the water.  It was fun watching the crewmembers coming out on deck in their shirt sleeves with their cameras; everyone taking pictures of each other with their cameras.  They were just as excited to see this display as the Pax were. 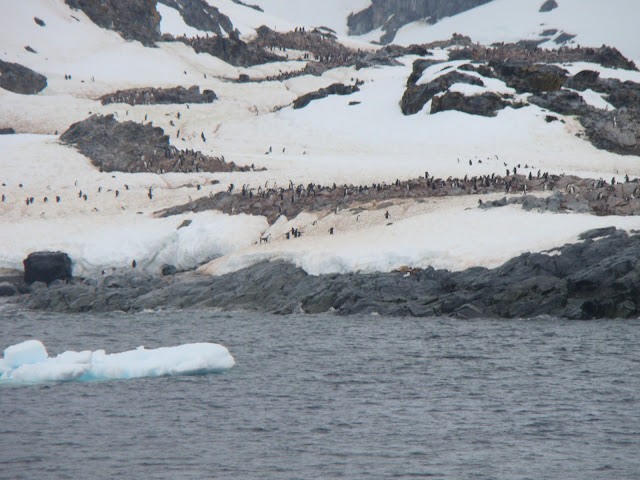 Then the Capt. sailed the ship over to a little before .  The temp is down to 34; & it started snowing again.   The winds have picked up to ; so it’s VERY COLD outside.  This was about the time I decided to move indoors up to the restaurant.  I could have dinner; & be ready to run outside if I needed to shoot something.  As soon as I sat down, someone sited a humpback whale.  By the time I turned my camera on, all I could catch was his fluke (tail).  The Capt. thought there might be more of them feeding; so he cut the engines & idled for a while.  The whales were not in the mood to put on a show for us tonight.  The beauty of this itinerary is that we have 4 days in which to fiddle-f@#t around the northwest side of the peninsula.  We can stop & wait for something to happen; or we can go to where the action is. 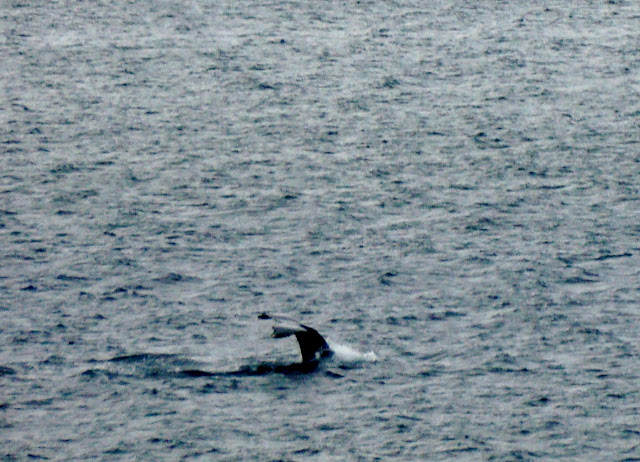 I set up my ‘office’ next to a window (& the plug) on the starboard side; & had some lovely people to chat with.  Dinner was pretty good.  For my appetizer I had prosciutto, salami, melon & figs.  I made a mixed salad at the salad bar; & got a taste of this divine spicy Thai beef salad with angel hair pasta. 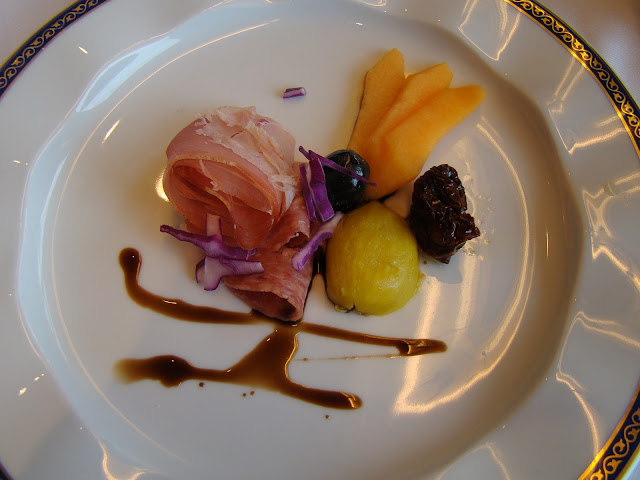 I wasn’t that excited about having prime rib again; but it was the lesser of all evils, if you will.  Of the 6 veggies they were supposed to have, they only had 3.  Of those 3, the most exciting was French fries (again).
None of the desserts appealed to me; so I went back to the appetizer bar; & got the citrus compote with honey & raisins.  Don’t know why; but the last 2 nights they haven’t even had the entrées on display.  They usually assemble sample plates to show off the main courses; & it is beneficial in helping you make up your mind.  Now you have to look in the steam table & figure what is what; & what goes with it!  No labels, no nothing? 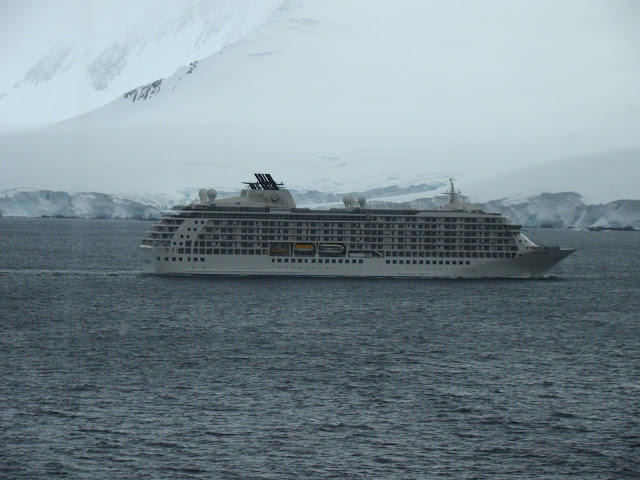 After dinner we spotted a cruise ship on the horizon.  None of us could recognize the funnel or any markings.  But when we got side by side, I could see it was the ‘The World of Residensea’ (the cruise ship where you can buy your apartment for prices starting at I believe it was $1.5M).  Must be nice!
The internet was up & down for hours.  I was still sitting in the at when the late night buffet opened up.  A lot of the staff come in & eat their dinner then.  Don’t know what they had; but it sure smelled good.  I was contemplating going up to take a look; but Dr. Vance came over with his plate & asked if he could sit down.  He ate; & we talked for half an hour.  He’s just the sweetest man.  I continued to edit photos after he left.  I took over 175 today; & it’ll be a long while before I get them culled down & edited. 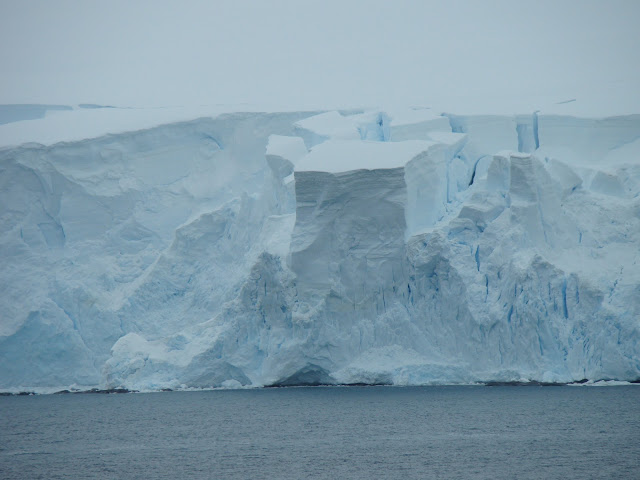 I lingered in the until nearly .  By this time we are headed back out into the Pacific (not sure why); but the ship is pitching mightily.  Gonna be some good sleeping in my room tonight.  When I came downstairs there was still enough light outside to read a book by. There were quite a few people lounging around at the tables, drinking coffee & hot chocolate; not wanting to go to their cabins for fear they’d miss something.  That’s the way I feel.  You must stay dressed at all times; boots on; gloves & coat by the door ready to hit the deck on a second’s notice 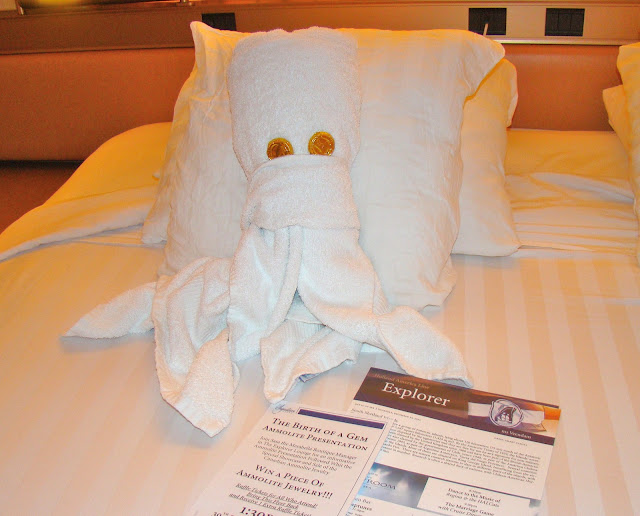 It’s so surreal to be surrounded by such beauty.  Neither , nor the Norwegian Fjords, looks this pristine.  I’m so glad they have the new restrictions in place so that no large ships carrying heavy fuel oil can contaminate these waters in the future.  The tranquility of this day, with a little help from Dr. Vance’s drugs, has started to heal my mind, body & soul.  I thank God for giving me this beautiful day & a chance to get in touch with nature.  I feel at peace……it’s been a while.
Posted by Unknown at 7:09 PM