It took me a while to shut down my mind last night; but the pitching & rolling were very beneficial to another great night’s sleep. I only woke up once (around 8); looked outside, saw that we were “here”; & went right back to bed. I just did not want to get up.

Finally about 10, I made myself. Turned on the TV; & saw that it was 40 degrees with a “brisk” wind (we all know what that means). It was looking doubtful that I was going ashore. I DO LOVE Newport; BUT, not enough to get on a frigid tender ride……..NOT today anyway. I’ll bet the Symphony looks quite beautiful at anchor from the shore. 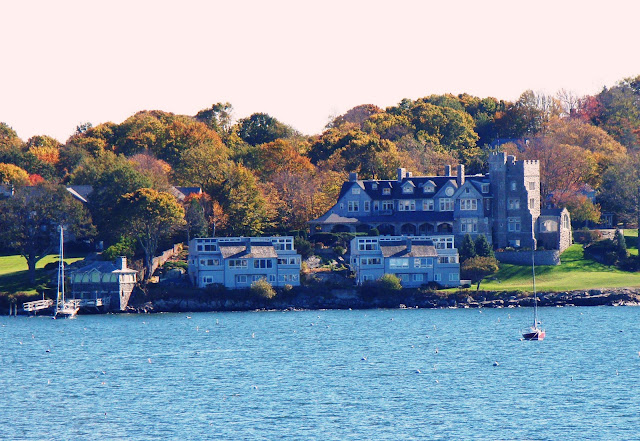 So, I bundled up; went out on deck with the camera; & took a few shots (basically to prove that I was at least in the vicinity). I’m surprised to see more green in the trees than yellow or orange. 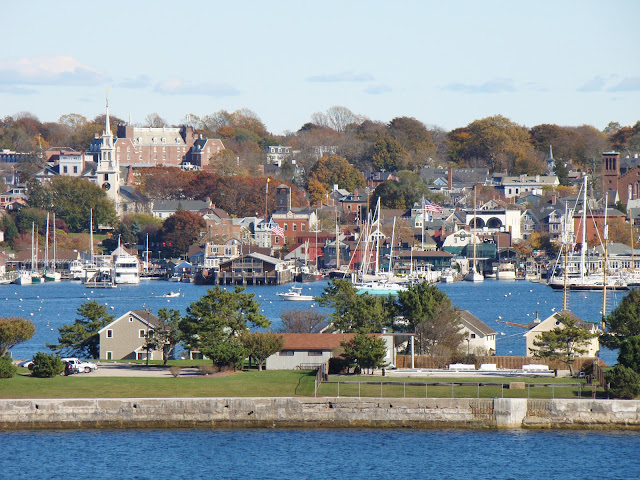 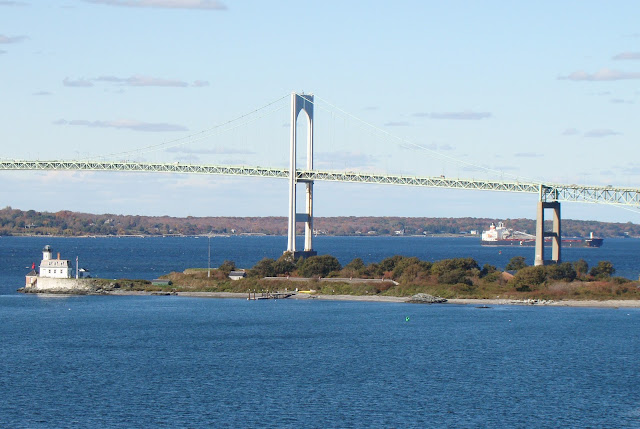 Just before 11, I finally made it to the “office” (the Bistro). Had my usual breakfast & capp’o. Looks like more “visitors” onboard today. But it was pretty quiet in there. The Chief came through for his caffeine fix “to go”. I went back to the cabin about noon to look for Mag. I had left her a note before I left, telling her to just refill the ice bucket & leave everything else alone. When I opened the door, she had serviced everything in the room. 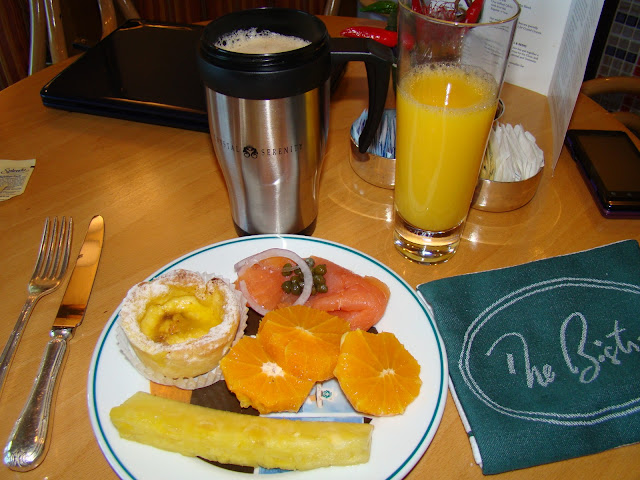 I finally tracked her down at the other end of the hall; & fussed at her. She said, “I’m sorry, I couldn’t read your note”. (She was joking, of course.) We stood & talked about her Halloween night out (crowded in town; traffic horrible; they ended up coming back to the crew bar). She wanted to know about my visit with Michael. When we got the girl chat out of the way, I got someone to take our photo so y’all could see what a darling young woman she is. She’s not only pretty; she’s got a good head on her shoulders. 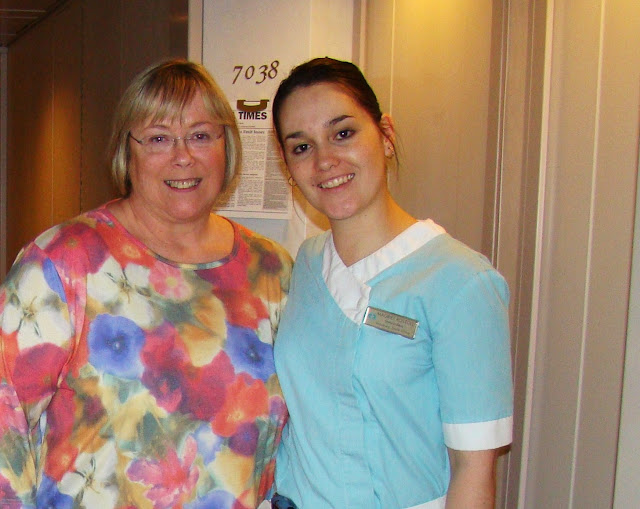 I came in & started to work on that dratted QA questionnaire. I may just take my time; & not turn it in until I disembark in MIA (that may not set well with the LA office though). At 1:15, I headed to the Lido to get a little lunch before they closed. I went over to speak to Alice & Ralph a bit first. Then found a quiet table to enjoy some lunch. While was filling my plate, the woman at the nest table was curiously studying my Dr. Pepper can. When I sat down she asked me what DP was. My first thought was where in the world do they NOT have DP? Turns out, in New Zealand. And I could find no words to describe what it tastes like. I offered to pour her a sip; but she declined. She just wondered if it was a “pepper” flavored drink. We had a nice chuckle about it later; & they were a lovely couple to chat with over lunch. 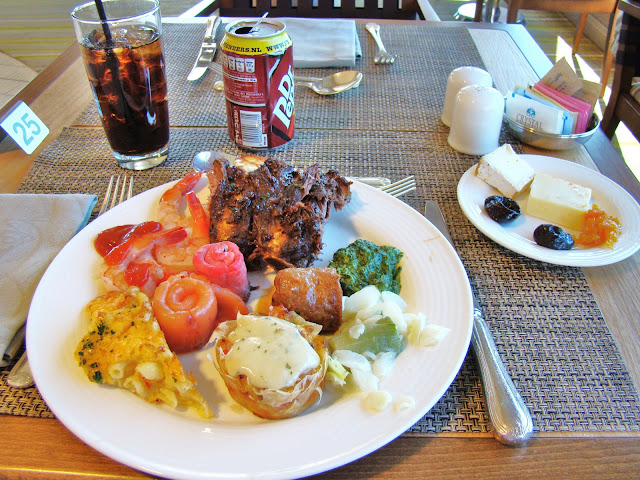 As for that lunch……I had some smoked salmon & beef carpaccio “rosettes”; some BBQ ribs (that had unfortunately started to dry out); creamed spinach; macaroni bake (luscious); glazed (white) asparagus & leeks (surprisingly delicious); & a fabulous little vegetable/crab tartlet of phyllo pastry topped with garlic aioli. I had a small piece of brie & muenster cheese with prunes & mango chutney for dessert. 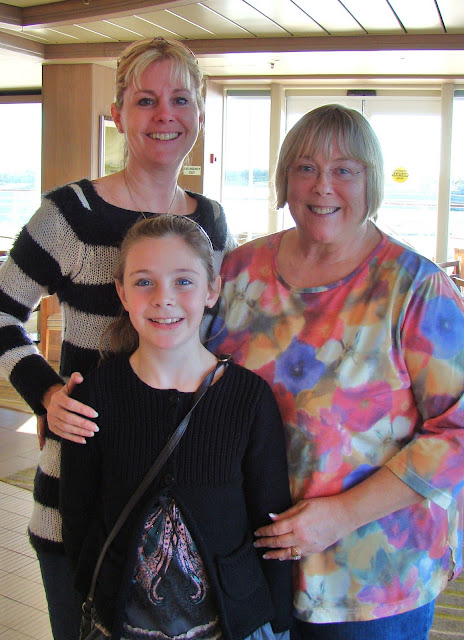 I saw my bridge friends, Carolyn & Tegan at another table; so I went to bid them farewell. Turns out Carolyn’s older daughter (Natasha) is one of the dancers (who knew). She introduced me to her husband, Sean. I got someone to take our photo so you could see who I was paired with in the bridge lessons (9 yr. old Tegan). She’s a cutie.

Before I went back in, I stepped out on the Lido Deck aft to shoot a few more pictures. It had warmed up a little bit; & I started to regret not going ashore. A few brave souls were out on deck chairs, wrapped up in coats; either dozing or reading in the warm sunshine. One brave men was up to his neck in the jaccuzi. Now, that’s plum crazy!

I’m soooooo glad not to be packing right now. But my time will come soon enough. I fiddled around on the computer until it was time to set sail. I didn’t venture outside; but I had a gorgeous view from my port side window. We passed some beautiful “mansions” & a lighthouse or two as we slowly made our way down the channel. 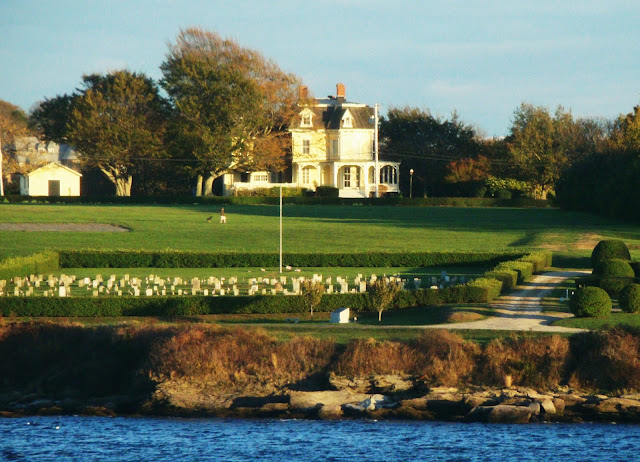 Would that be the "family plot" out back? 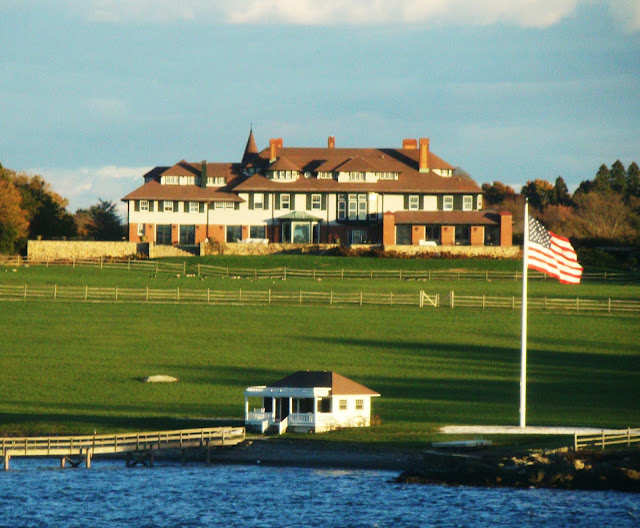 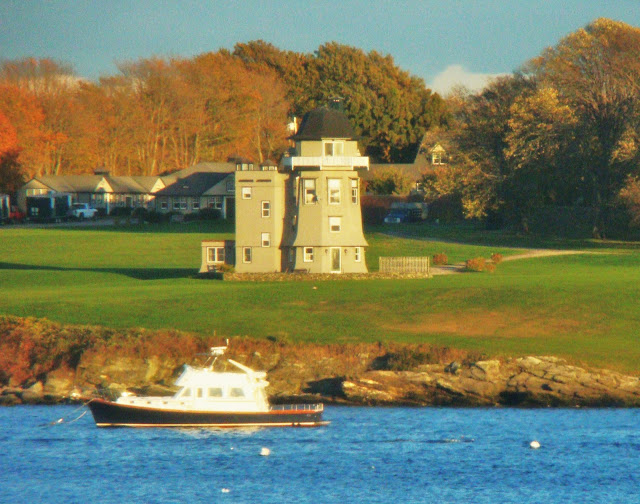 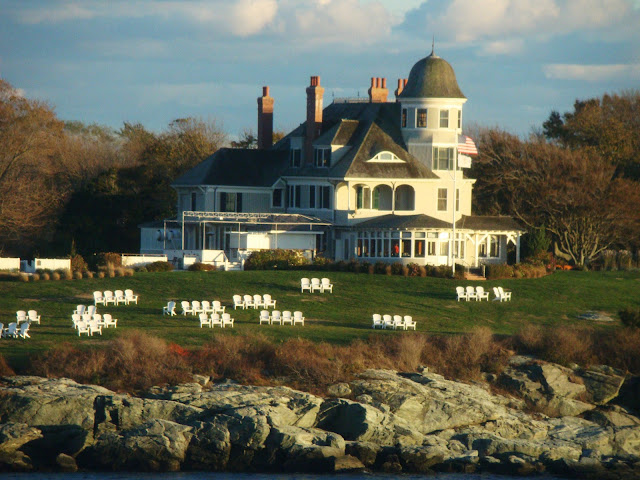 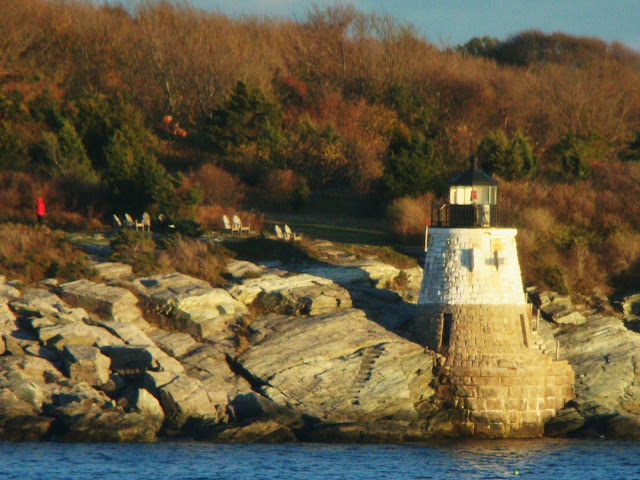 I just had to go to the D.R. to be with my new (table) friends one last time. Everyone except Pauline will be disembarking tomorrow. Pauline told me tonight that she will be reassigned to the Capt’s table for the next segment. Where I’ll be, nobody knows (well nobody except maybe Norbert, the M’D). 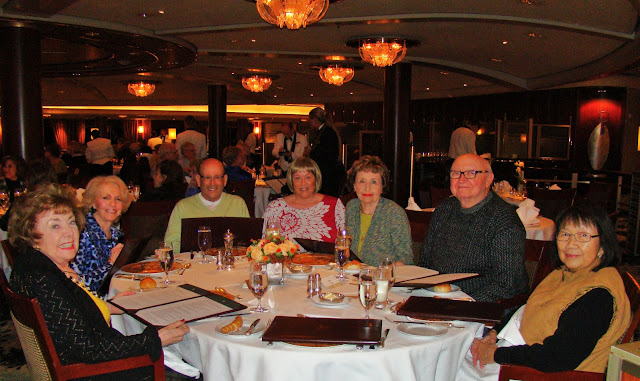 I asked Adem to take a table shot. We’ve come a long way since night #2. Maurine has loosened up; Pauline talks nonstop now; & the rest of us are just as irreverent as when we started. 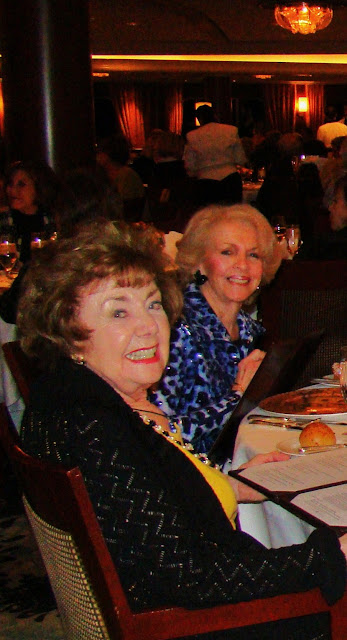 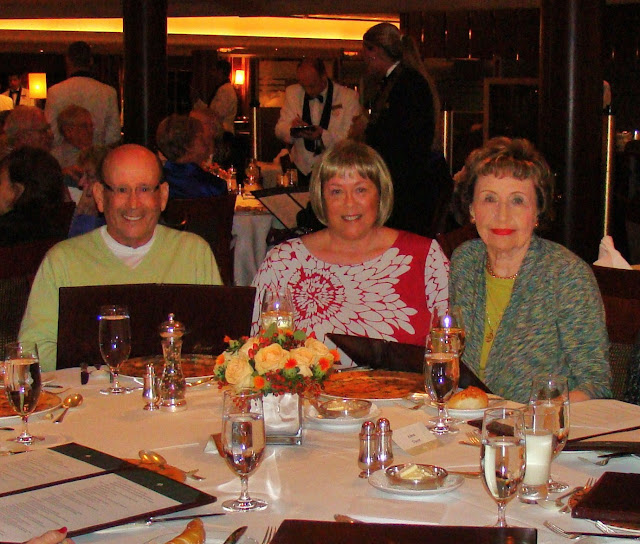 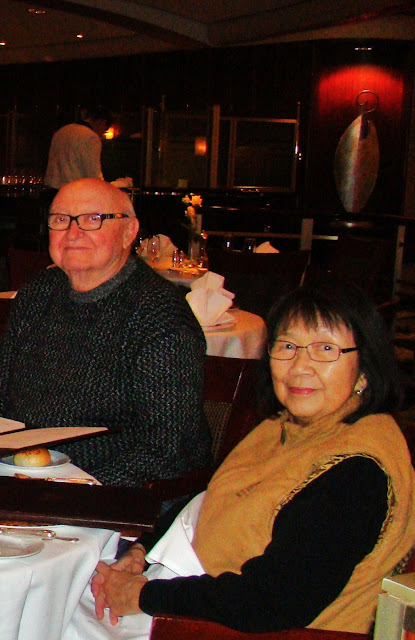 I wasn’t expecting a lot when I previewed the dinner menu earlier; but it turned out to be a fabulous meal. My first course was a puff pasty filled with a ragout of mushrooms, chicken & asparagus, bell peppers & tomatoes. Delicate; yet very tasty. 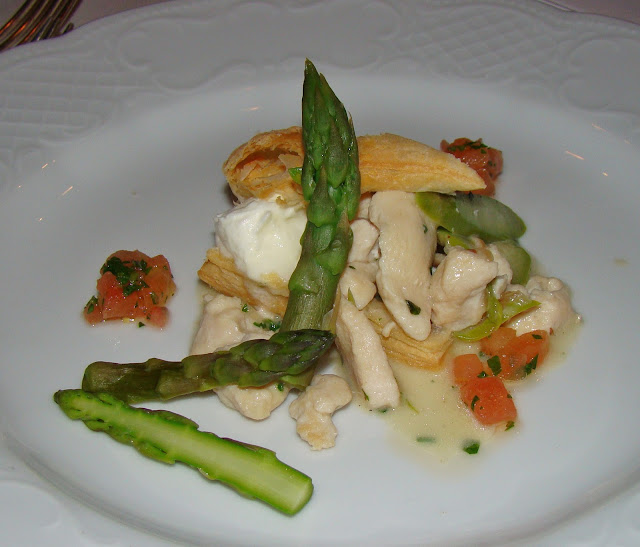 I couldn’t pass up a chance to taste the pasta special. Everyone I’ve tried has been excellent. Tonight’s was no exception; a penne pasta campagnola: garlic, artichokes, bell peppers & tomato sauce. 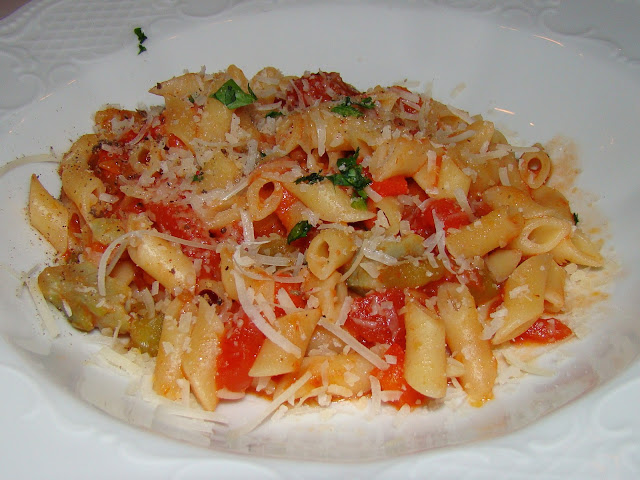 I had a tough decision on the main course tonight; but went with the walnut shrimp Cantonese. Five jumbo prawns lightly fried in tempura batter covered with an orgasmic cream sauce & honey glazed walnuts. I made substitutions on the veggies; wok fried bok choy & braised red cabbage. It was simply divine. 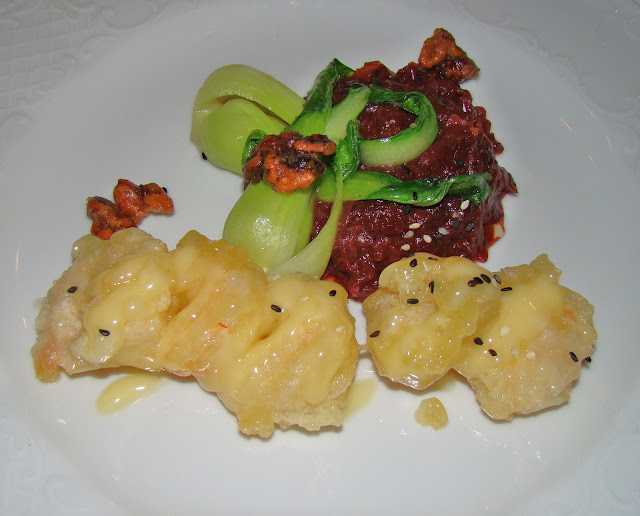 While Alice had her umpteenth & final chocolate ooze cake, I was delighted with the assortment of 7 different cheeses that Adem chose for me tonight. He said that the cheese trolley had very few mild cheeses to choose from tonight; so he went back & found other cheeses that he knew I’d like. You gotta love it; after all, it’s Crystal! 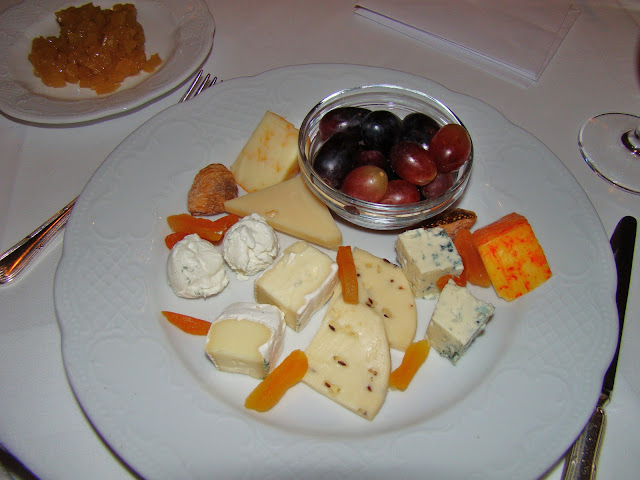 Man, I hate goodbyes. I got weepy hugging Doris; & it went downhill from there. Ralph said some very nice things to me; & even Maurine was cordial. Norman’s just a sweet, teddy bear of a guy. A little quirky; but I like him. I’m sure I’ll have a few more conversations with Pauline. She’s a really interesting & funny woman hiding behind that Asian façade of hers. The rest of these folks…..I’ll see them all tomorrow.

Adem packed up my leftover cheese & fruit, which I’ll have for breakfast. Everyone is off to finish their packing; most have to get up pretty early. All I have to do, is be sure to get up before 11 am. I won’t be able to get my capp’o in the Bistro after then. Now let’s just hope they don’t make too much noise collecting the luggage out in the hallways tonight. Tomorrow is the start of the (in)famous voyage 0226……over 150 Cruise Critic members. This voyage will go down in CC & Crystal history! And I need to rest up…..

(Seems I got a little wound up today.  A lot of pictures despite the fact that I didn't even go ashore.  Hope I didn't bore y'all.)

ONE LAST NOTE (I promise):
I liked this photo of Doris, Alice & Ralph; so I sorta "stole" it from his camera card.  They dined in Silk Road one night with Col. Ralph Vargas & his lovely wife.  Col Vargas is retired from the U.S. Army & served as the Chief of NATO's Situation office.  He was lecturing during this segment.  BTW, their daughter is Elizabeth Vargas of ABC's 20/20. 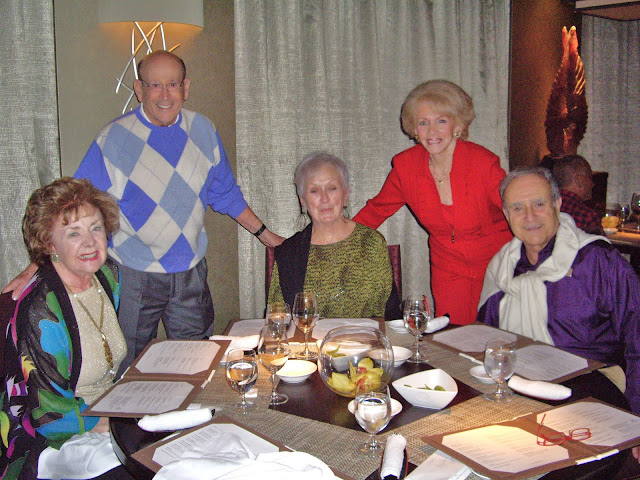