I slept very well; & was excited to get off & explore Charleston. Everyone knows the town is rich in history; but what I was most interested in was the genteel, charm & epicurean delights that it has to offer. I had done my research; & I wanted to see how SC “Southerner’s” cooking compared to the TN version. 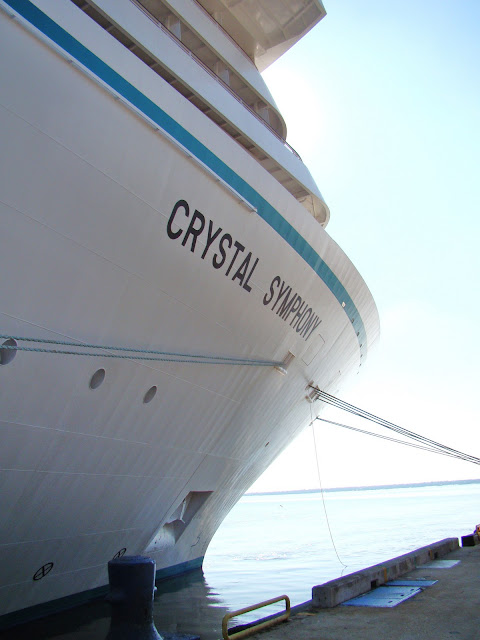 For the first time this entire cruise I turned on the “morning show” that the cruise director tapes in the very early hours. I found myself laughing out loud at some of Paul McFarland’s antics. I had no idea that all this time, he was doing a weather segment (including maps & moving radar). He & the Asst. C.D. chit chat about the day’s port; their personal experiences in travel; showing hilarious clips of anything & everything. When I met him at the first C.C. cocktail party, he was fun. But I had no clue just how ‘wacky’ he really is.  Paul mentioned that he served on the USS Yorktown; & was planning to go over to Patriot's Point to visit  the ship today. 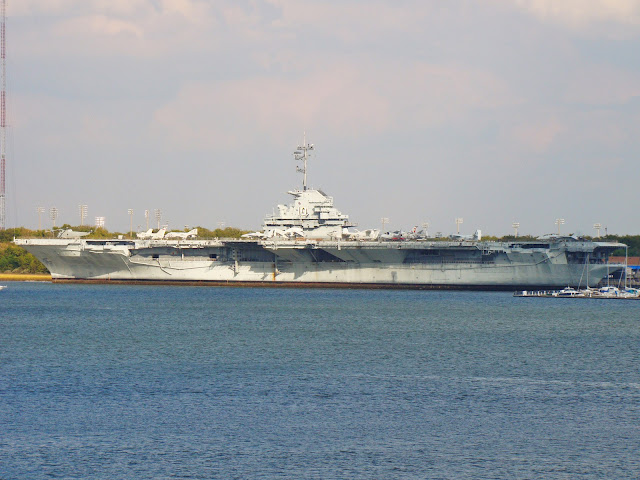 I went down to the Bistro about 10 for some capp’o & fruit. I saw Fran, who had already been off & back on. She said it was very cold out there. So, I thought it best to wait until noonish; & maybe it would be warmer. So, I did my “work” in the Bistro watching the comings & goings. Saw no sign of any CC people; I guess they were off & running earlier than me (no surprise there). 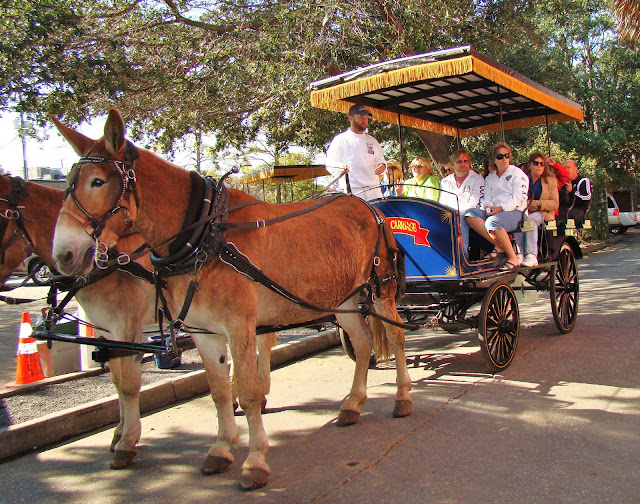 About 11:30, I couldn’t wait any longer. I had on short sleeves; & carried a sweater. It was too warm with the sweater on; but a little chilly without it. The more I walked the warmer I got. I think it made it into the low 60’s; & it was beautifully sunny. I had no map; not knowing where I was going. I just followed the steady flow of people. I found myself by the old market; & decided to sit & make a few phone calls. 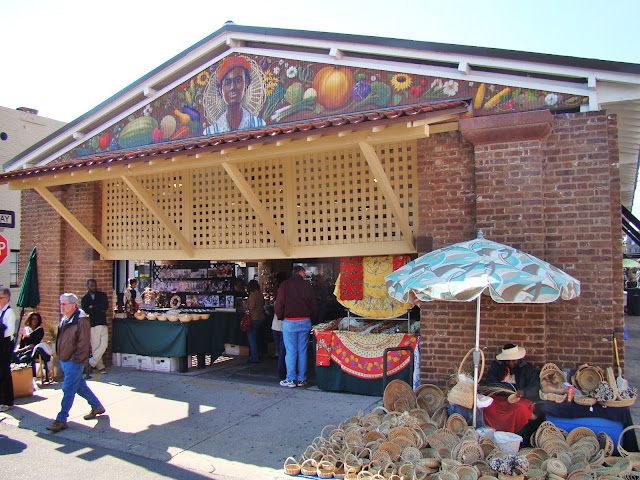 While I was checking in with everyone, I learned a neighbor/good friend had been taken away in an ambulance last night. No one seemed to know what happened. Not surprising considering everyone looks to me for info when I’m at home. I’m the Secretary of the Homeowner’s Association; & the one everyone calls with questions or when they need something. And the person who was “afflicted” is the President of the Assoc. (the next person everyone goes to for help). Note to self: implement a telephone chain when I get home. 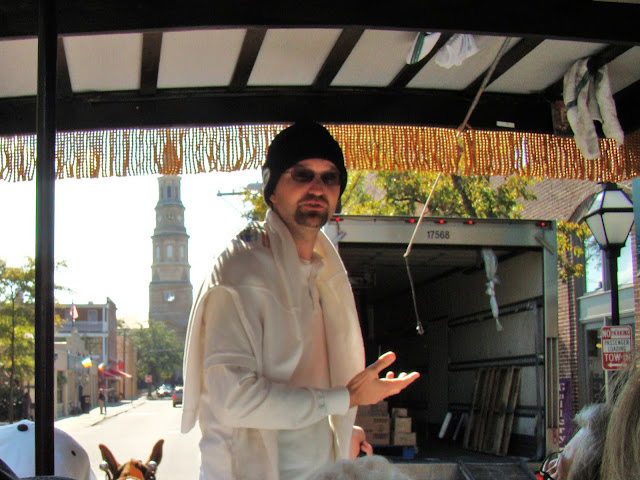 I watched all the horse drawn carriages go by; & I thought that would be an interesting way to get the lay of the land. I was headed to the carriage “barn”; & a lovely young woman stopped me to ask if I was interested in the tour. She had one seat available ($20) on a carriage that was departing NOW. Nice surprise, since it appeared that there was a 45 min. wait back at the “barn”. I hopped on.  Our guide’s name was Adam; & he was hilarious. And he kept the 11 of us entertained with his funny stories intermingled with historical facts. We started our ride on Church St, then making a big square down Broad St, to S. Battery St & back to Church St. Adam pointed out some beautiful churches & public buildings. 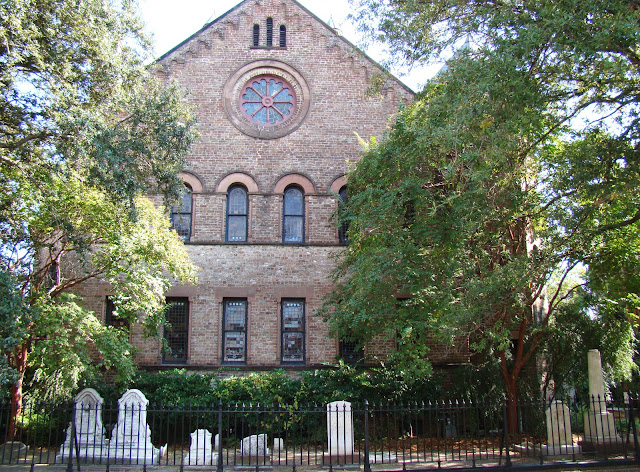 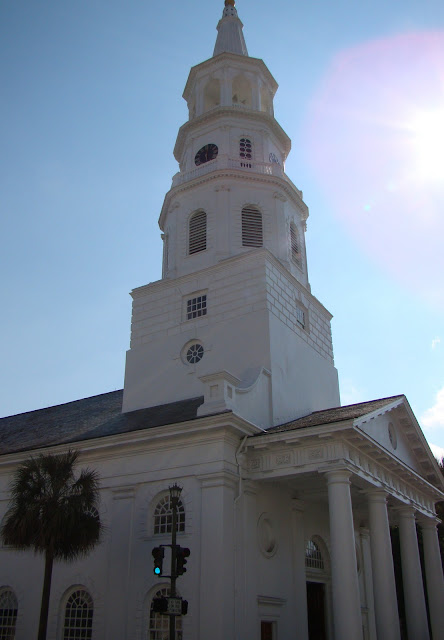 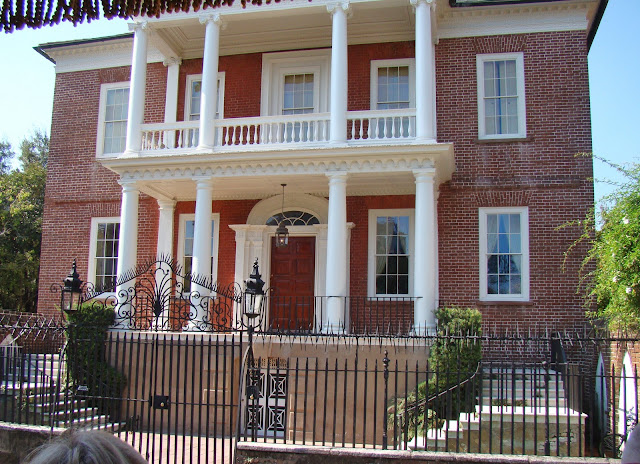 The beautiful homes are large, colorful & appear awfully close together. All have verandahs (even on the 2nd floor) that sometimes face other houses. Made me wonder if, at one time, they had uninterrupted views to the ocean until their neighbors came & built a house in front of them. Nothing like having your morning coffee on the verandah; & you’re peering down into your neighbor’s dining room. 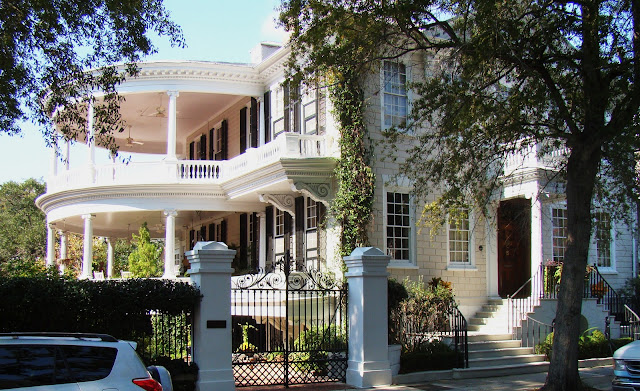 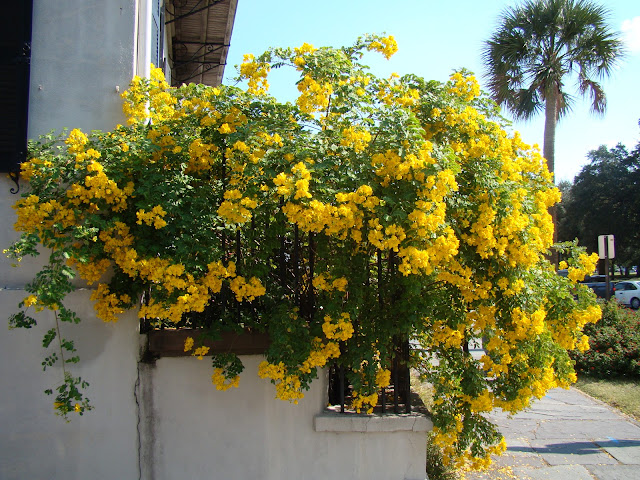 There were still some flowering shrubs in bloom; & for some reason the palm trees looked out of place. A lot of the houses have intricate wrought iron fences & gates. Since the city closely regulates exactly what routes the carriage drivers take, I got lucky that mine made the loop by the gorgeous “mansions” along S. Battery St. that overlook White Point Gardens & the ocean beyond. 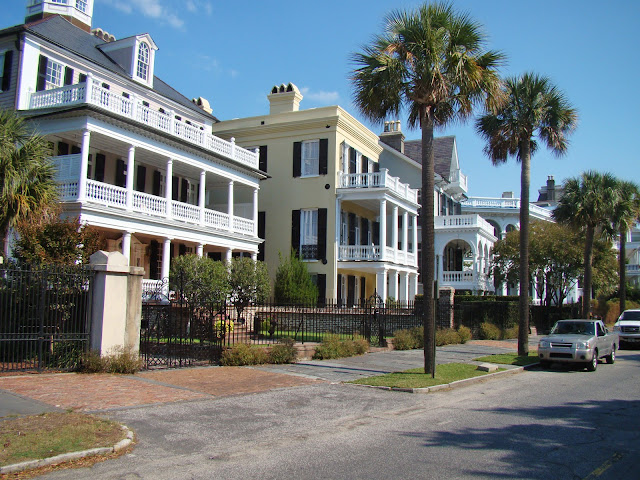 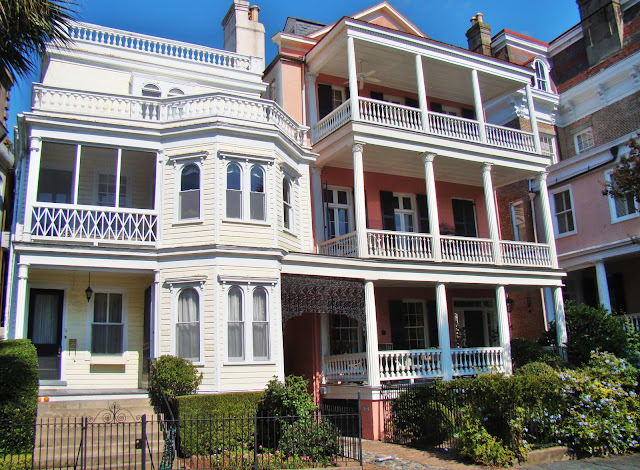 In order to minimize & spread out the carriage traffic, the city dictates what route each driver makes. It’s sort of like the lottery, the driver doesn’t know where he’s going until he pulls up to the booth & is handed a route #. 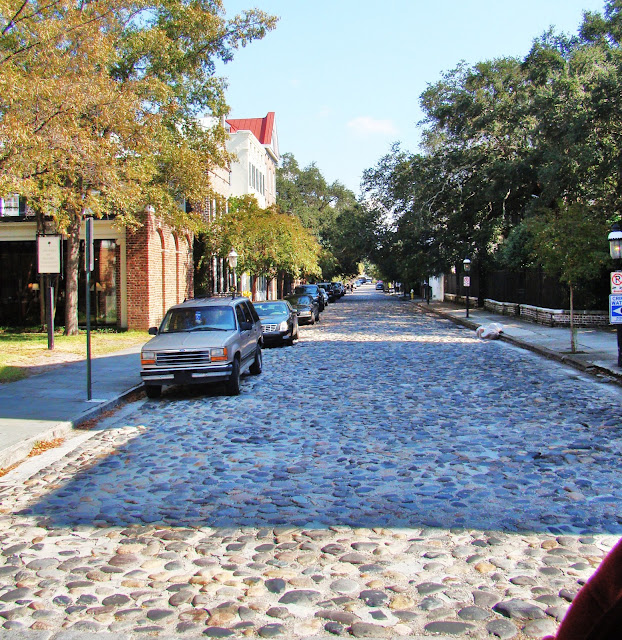 As we made our way back to the “barn” we passed Chalmers St, which happens to be the longest cobblestone street left in the U.S. When the tour ended about an hour later, Adam gave me directions for getting to Jestine’s Kitchen. The distance from the ship to Jestine’s is just under a mile each way; & I was grateful that it was cool enough or else I wouldn’t have been able to survive the trek. I arrived about 1:30; & the line wasn’t too long. I’ve been told sometimes the line goes around the block. 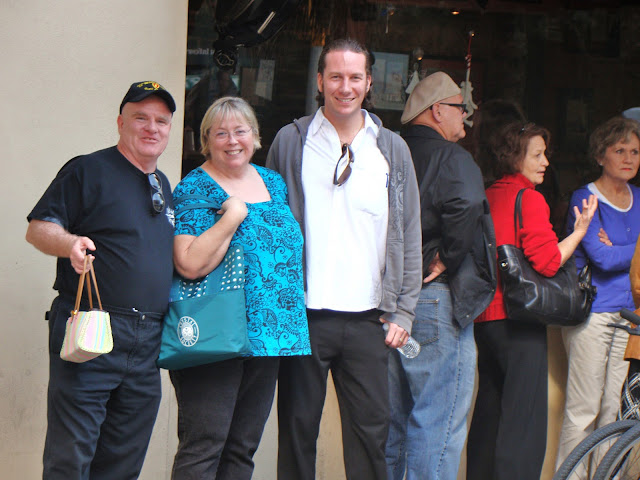 During the 30 min. wait, I realized that the person standing behind me in line was Kyle Esplin (the pianist who had the Crystal Cove rocking after the NY sailaway a few days earlier). He reminds me of the actor, John Corbett, from “My Big Fat Greek Wedding” & “Northern Exposure” a while back. He was with another couple from the area that he had worked with before on Princess Cruises. This was Kyle’s first contract with Crystal; & he’s very talented. They were very nice to chat with while we waited in line. 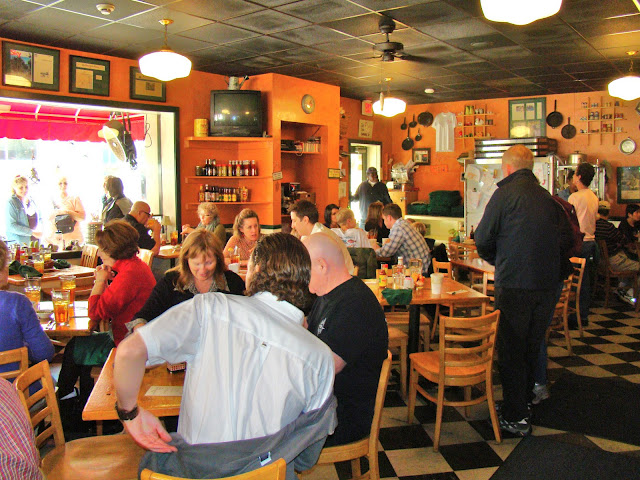 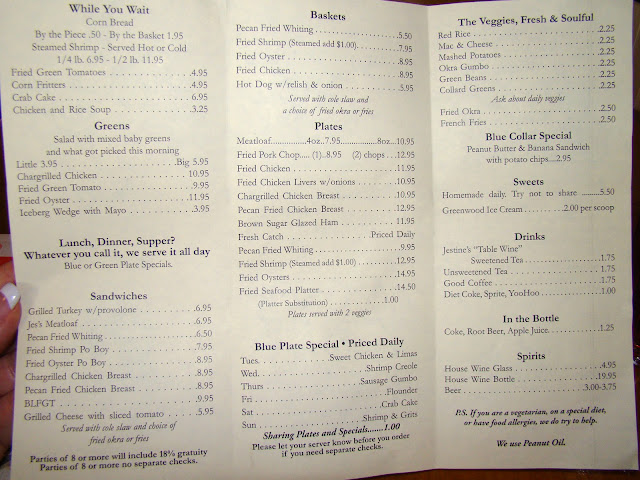 When I finally got seated, I was drooling just reading the menu. It’s kinda of a dive with waitresses that had probably worked there forever. I had a chance to talk with the owner, a lovely lady named Dana Berlin. She opened the restaurant using the recipes of & to honor Jestine Matthews, who was her family’s housekeeper when she was growing up. Jestine died in 1997 at the age of 112. You can tell the food coming from the kitchen is made with love. I have to admit that a few things were not seasoned during the cooking process in the same way TN country cooking is done. But everything I tried was pretty authentic. I ate way too much there at lunchtime; & ended up bringing home other things to have for dinner. 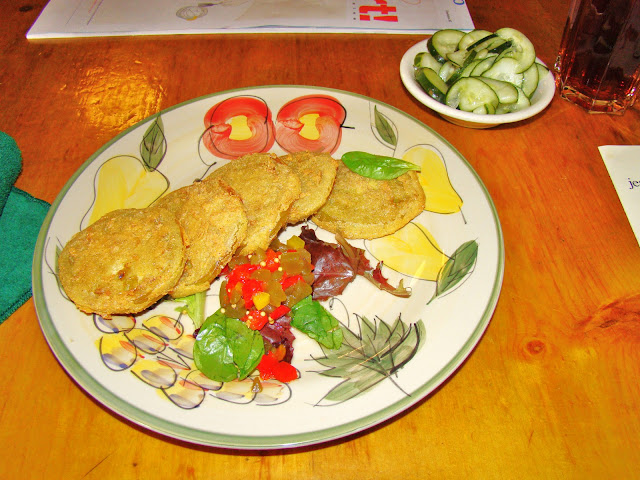 I had the fried chicken plate with collard greens, mac & cheese, fried green tomatoes & a bowl of cucumbers in sweetened vinegar. The fried green tomatoes were good; but they came with an unusual green pepper relish instead of the usual dipping sauce. The fried chicken was a little overbrowned (& I’m more used to double breading); but the breading/coating had a nice little spice to it. The mac & cheese was excellent, as was the pickled cucumbers. I tried the pineapple bread pudding for dessert. It was a little dry, could have used a little more of the accompanying vanilla sauce. 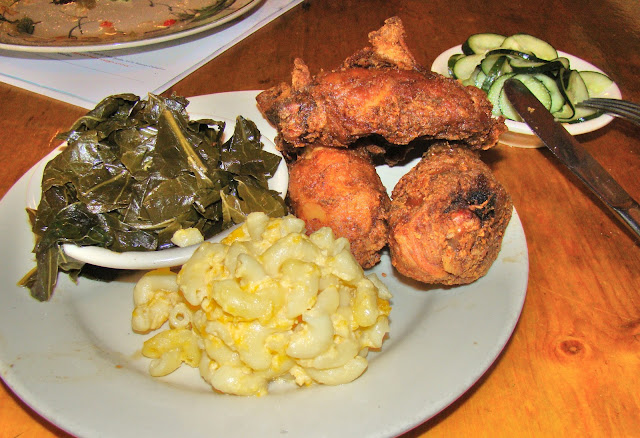 I was so stuffed; I wasn’t sure I’d make it back to the ship on foot. Now late afternoon it was getting a little cool outside. I was really worn out when I got “home”. I took a short nap; & then got to work on the computer. Mag came in to fuss at me for keeping the ‘do not disturb’ sign on the door all day. I didn’t really need anything; didn’t care if the bed was made (I just crawled back in it after my afternoon outing anyway). I figured the only way to keep her out of there was to leave the sign up. If I didn’t she’d hang around in the hall all day waiting for me to leave, even though it might be hours after her shift is supposed to end. I told her I was staying in tonight; & that I had carry out food from Jestine’s for my dinner. She even offered to take it to the crew mess to heat it up for me in the microwave. (Certainly wasn’t going to let her do that.) BUT, there was one thing on the D.R. menu that held great appeal to me…..caramelized garlic soup with king crab meat. 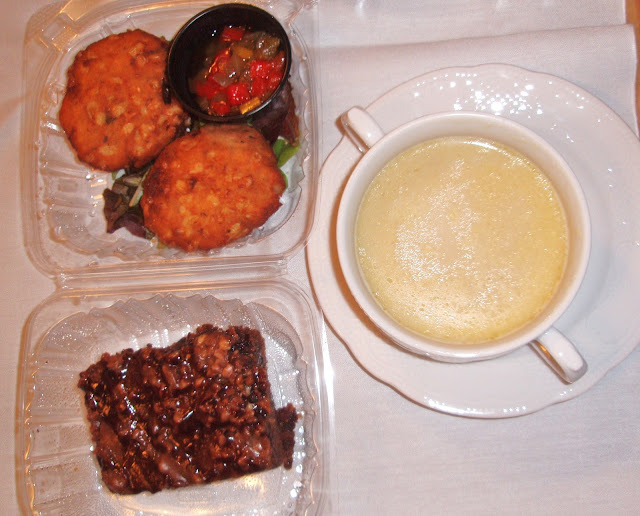 I asked her to bring it about 9; which she did. That soup was divine, as are all of Crystal’s cream soups. What I brought home from Jestine’s was fried okra (very good), corn fritters (not so good), lima beans (excellently seasoned), gumbo (not so good) & their famous coca cola cake (orgasmic)! I actually left a little of that to have for breakfast in the morning.
I wanted a break from the computer; so I got in the bed to read. We didn’t set sail from Charleston until 11 pm. By the time we made it out of the harbor & into the Gulf Stream, I was being slowly rocked to sleep. Don’t remember much after that.