Well of course, there’s more……did you really think this day would go off without a hitch???

And most of you may find this day’s events insignificant; even tedious. That is to say, until it happens to YOU. I’m going to vent now…….

I had the alarm set for 6; but woke up on my own a little after 4 am. My first thought………there’s only one other passenger awake at this hour…….Keith!

With internet time leftover, I wanted to upload more of the blog. It took at over an hour just to upload the photos from Philadelphia. If I had any sense whatsoever, I’d wait until I returned home to upload the blog. It would be a lot cheaper; but what fun would that be?

I watched the sunrise; & shortly we were entering the Port of Miami through Government Cut.  I had a perfect view of the magnificent homes on Fisher Island from my window.  I had a few things to nibble on in the cabin; & quickly rechecked the closet & drawers. It was nearly 8 when I opened the door & looked down the hallway for Mag’s cart. In a few minutes she came through a crew door; & I had to say my goodbyes. Man, it was hard. It’s been many, many years since I developed such a close bond with a crewmember. I told her as much as I’d like to sail with her again; my wish for her is to get off ships, go back to the real world, & do good things. I’d be so proud to claim this young lady as my daughter.

Very soon, my feelings of sadness would turn into that of frustration. There in the bridge room were 5 passengers & one crewmember (the entertainer, Mark Merchant), waiting to disembark. There were 2 luggage trolleys laden with all our bags; a long table where 2 “official looking people” were sitting, shuffling papers. I overheard the “officials” discussing with a member of the ship’s crew, various procedures having to do with “clearing” the ship. The ship wanted to set up 2 gangways to speed up the flow of passengers waiting to go on tour. “They” (the officials) said “no”. “They” wanted to know ”when did you last offload any garbage. “How much garbage did you have”? “They” appeared to have no interest in me/us whatsoever.

So, at 8:30, we started asking where is Customs? No one knew. “They” called several times; & someone was supposed to be on their way. Finally satisfied that the “in-transit” passengers were “cleared”, they could now let the tours depart.

“They” said the crew was not cleared; & no one but passengers could go ashore at this time. But wait…..what about the crew that usually escort the tours? “They” asked, “are the crewmembers going on the tours in uniform”? “No”. “Are they working”? “No; but they do hold up numbered paddles to direct people to the right buses.” “So they’re out there in their street clothes working”? “They’re not working, they’re just taking the tour on their free time”. “They” decided if the crew escorts held up paddles, that constituted working on U.S. soil; & they aren’t authorized to do that (whether wearing a uniform or not). By this time the ship’s officer had paged the tour manager trying to explain why the tours couldn’t leave yet; & that the “escorts” could not touch those numbered paddles! I’m just staring at all this in total disbelief. I could have slept another 2 hours while they sorted this crap out.

Then the chatter over the walkie-talkie turned to the subject of the luggage trolleys……who was going to take the bags ashore for us? “They” said the porters outside aren’t allowed to come onboard & get it. Well, the ship’s personnel aren’t allowed to work on “their” dock. What did all this matter if Customs/Border Patrol wasn’t going to come & release us anyway?

Our group was starting to get fidgety. We’re beginning to wonder if we’re the first passengers in U.S. history who ever tried to disembark a vessel that was in-transit. Just after 9, two Custom’s officers finally appear. We were now free to go; but what about our luggage? They were still trying to work that out. It was agreed, in order to not step on anyone’s toes, ship’s personnel would push the trolleys to the end of the gangway. At that time the porters outside would take it from there.

Somehow we got herded down this stairway; but our luggage went somewhere else. We stand outside in the chilly morning air, waiting & waiting. It was starting to get cloudy; & my mood was starting sour along with the weather. I tried to go back in the building to ask where our bags went; & a woman put her hands up, ordering me to halt. I was not allowed to reenter the building. By now, my car service driver was going to have to park in the lot to wait this out.

I watched as Chris, Steve, Keith, Anne Marie & many others left the terminal for their respective day of touring. My patience was all but gone by now. Finally about 9:30 I spotted one of the “officials” that had been onboard talking “garbage” & “paddles”. I went up to him; & asked if he could find out what they did with our bags. He was very nice; he disappeared inside; & returned about 15 mins later. Behind him were the porters with the trolleys. NEARLY TWO HOURS after this fiasco started, we were finally on our way.

I was seething when I got into the car; poor Bruce (my driver) had to listen to this for about 10 miles! While crossing Alligator Alley, the sun came back out. There were lots of alligators sunning themselves on the banks along the canals. It made me think of Chris & Steve, who planned to spend this day in the Everglades. I had told them to keep their eyes open for the alligators that would be “sunbathing” themselves in the cool weather.

I wonder if they saw as many gators as I did……or had nearly as much fun?

To put an end to this journey, I wanted to share photos of the beautiful Crystal Symphony.

Thanks for hanging in there with me…….. 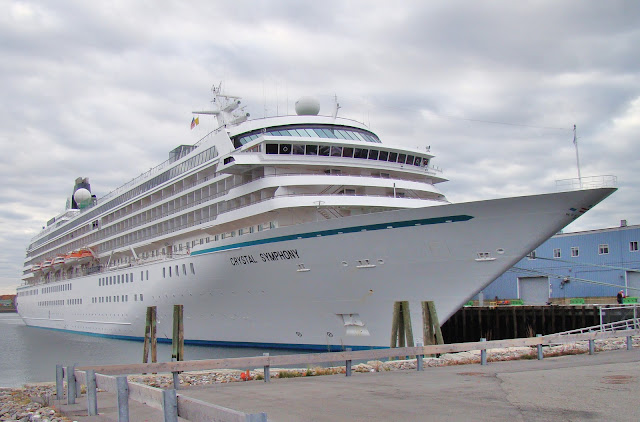 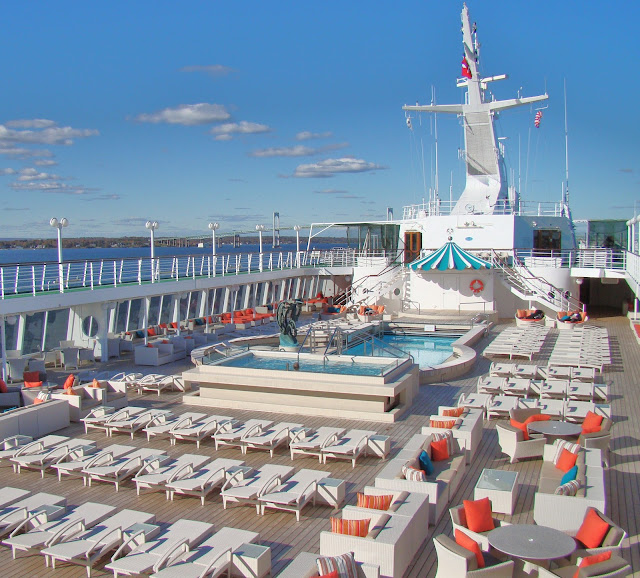 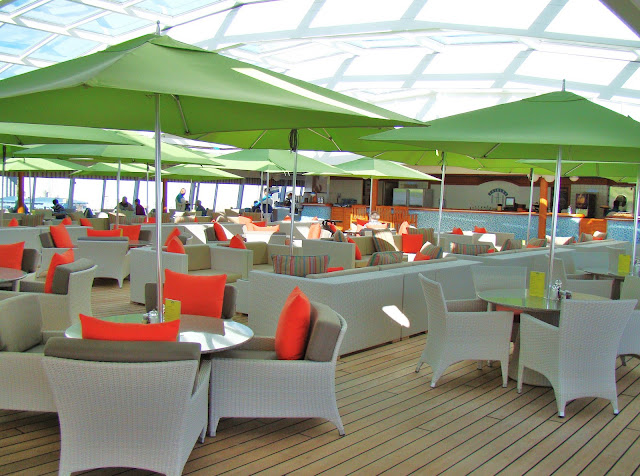 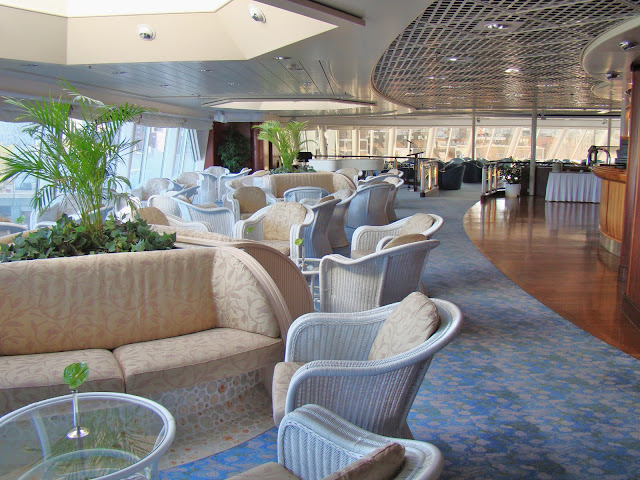 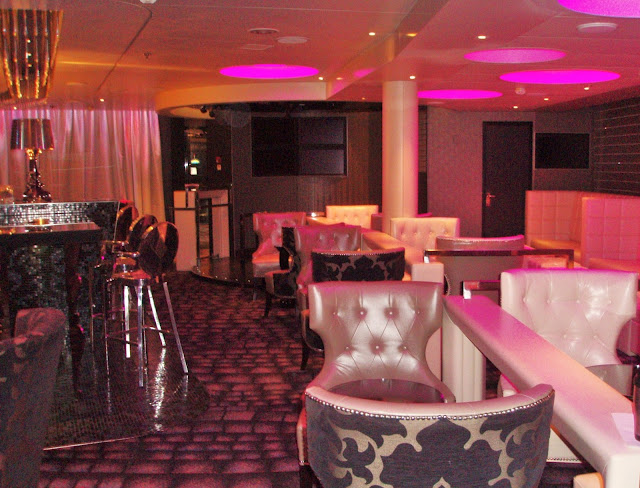 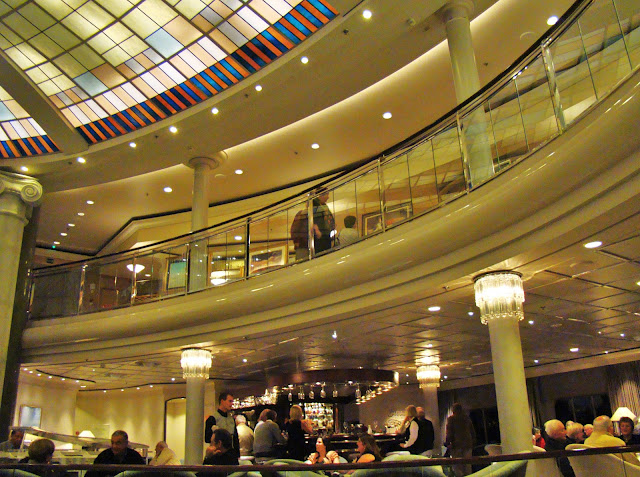 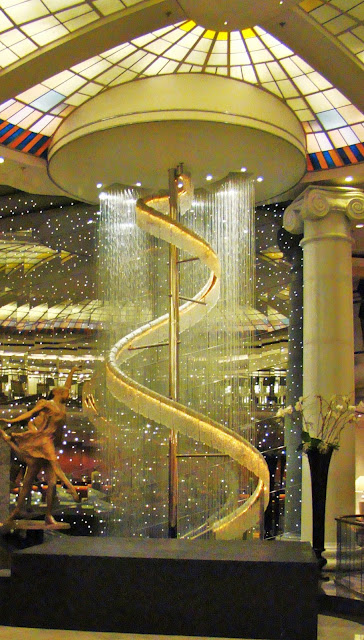 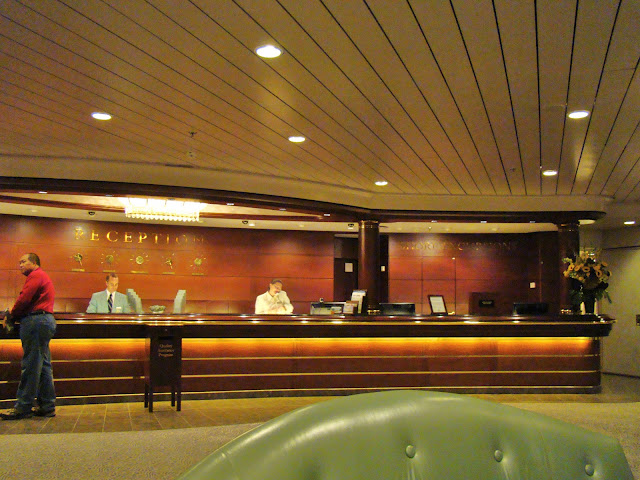 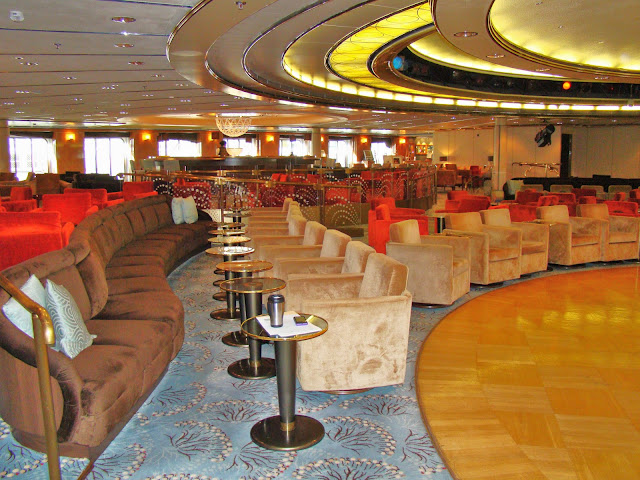 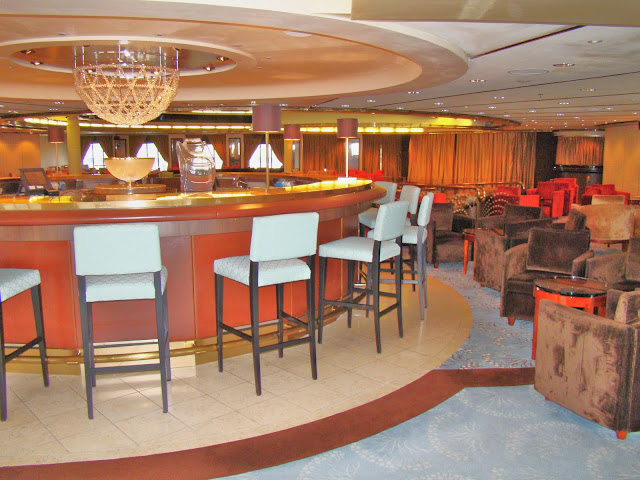 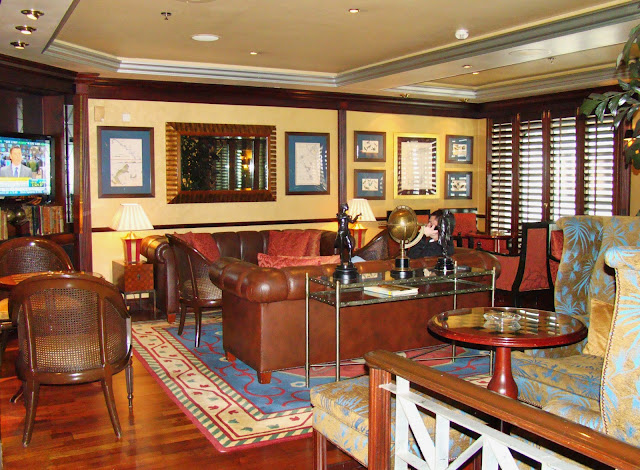 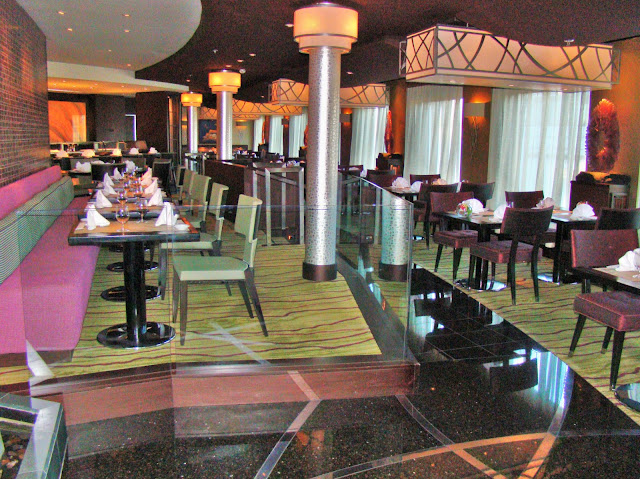 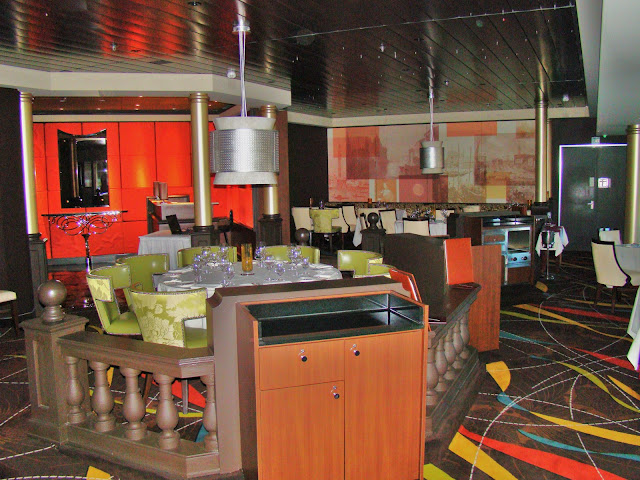 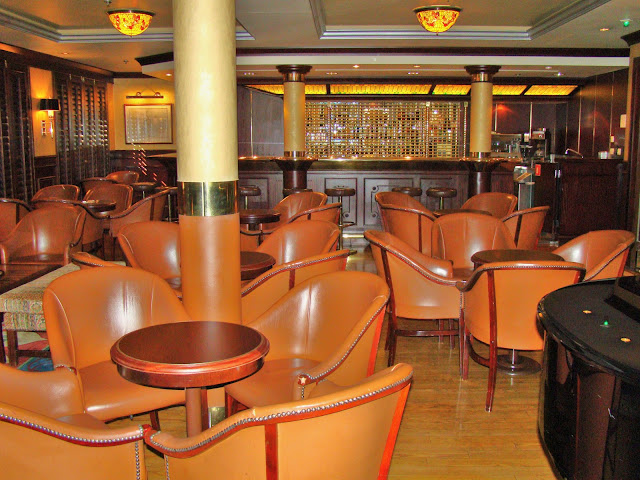 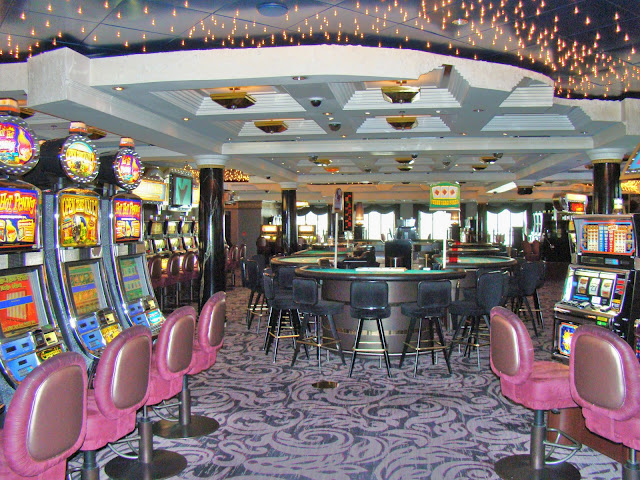 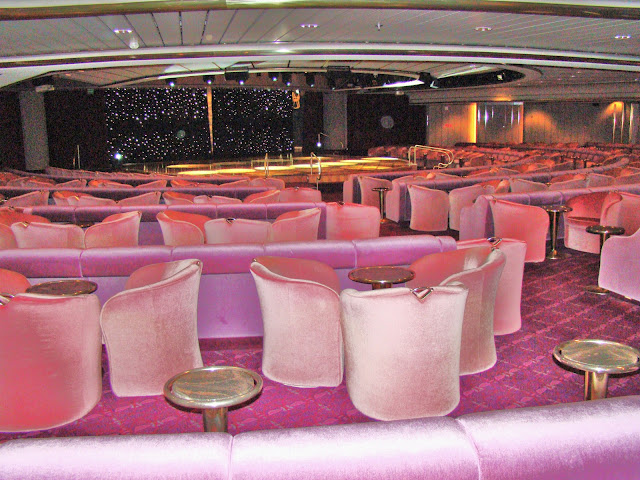