It’s a luxury to have another sea day onboard the beautiful Symphony. The ship really started pitching & rolling early this morning; so much so that it woke me up about 7:15. I peeped out the drapes to see very grey skies; but the sea did not look rough at all. Back to bed, I just laid there smiling to myself. Lounging around, enjoying the rocking. Before I knew it I was fast asleep again. It startled me when I awoke; & saw that it was 9:45 already. I intended to take the beginner’s bridge class over again at 10:15. I had to scurry to the Bistro for some fruit & capp’o. A lovely lady walked up to me (my apologies for forgetting her name), recognizing my photo from the blog; telling me how much she had enjoyed reading about 0225. We were chatting when the Chief walked up to say good morning. She turned to him & said, “Oh, you must be the Greek Chief”. He looked puzzled, until I jokingly told him that I’d made him “famous” on my blog. She’s traveling with her Greek family; & wanted to introduce herself to him. He promises to be at dinner tonight. I told him that our new table was an “interesting mix”.

There were at last 6 tables at bridge. Brenda is still the instructor; but with a new helper, Eileen. Knowing that they will have 9 sea days/9 lessons to learn the game this cruise, makes me very jealous. She mixed it up a bit today. We learned basically the same things she taught on day one before; but in a different manner. She actually let us play several hands (without bidding) just to get a feel for reading the cards. I liked this approach better.

I then went down to the reception desk to turn in some paperwork; & to stop & see the cruise consultant. I wanted to set up an open booking; but there were quite a few people waiting to talk with her. I grabbed one of the “self service” forms; & just handed it to her when she stood up to call the next person. Not a problem, they will process it later; & leave a confirmation letter in my “mail box”.

About 1 pm, I went up to the Lido buffet to get some lunch. The place was pretty busy. I created a small mixed salad; had half a reuben sandwich; a few of those luscious meatballs with dragon sauce; a few onion rings; a few boiled shrimp; & some fried calamari. I got some brie, dates & mango chutney (which I brought back to the cabin for dessert later). Ernie stopped by my table when he came through on his way to play bridge. 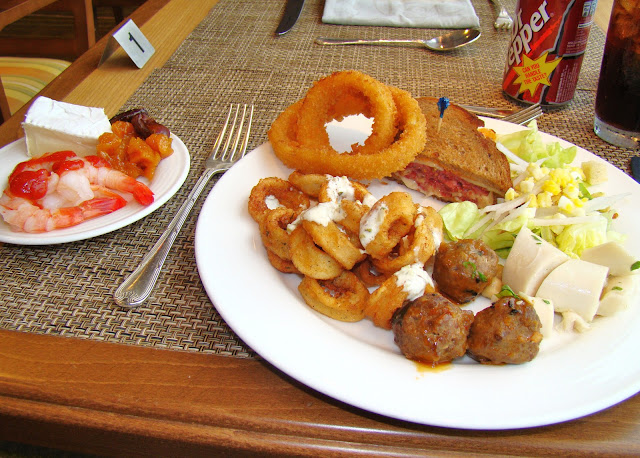 At 1:30, I attended a thought provoking lecture given by Ambassador Ed Peck (“The Shock of Other Cultures…..Especially Yours”). Mr. Peck has been our Ambassador to many countries. He’s served on terrorism task forces, on the Joint Chiefs of Staff & at the Pentagon. He’s had a chance to observe & compare cultural differences from around the world. Although I wouldn’t attempt here to point out “our” differences; let’s just say that in America, we interpret “things” in a much more radical & “in our face” manner.

During the early afternoon, the weather took a change for the worse. Dark skies; squall lines on the horizon; & then a blinding rain started to fall. The wind was blowing the white caps; & they put ropes across the doors to discourage anyone from going out on the promenade deck. This type of sea day was tailor made for some reading & relaxation. And that’s about as much as I managed to do until dinner time.

I had a scheduling conflict this morning during bridge. I wanted to go to a lecture by Ken Rees; so I was lucky to catch it replayed on TV this afternoon. Ken Rees is an award winning journalist for Britain’s ITN news agency. This talk was entitled “A Million Miles & A Thousand Stories”. He shared countless stories of his years covering politics, wars, space travel disasters & the British royals (always a fascinating subject to me). I’ve heard his lectures on Crystal before; & he’s always informative & entertaining.

I read a little while & then drifted off again. If there were a way to “bottle” this vibrating/rolling motion, I’d make a MINT! It’s better than a mojito; much better than a good massage……it’s more like a drug, a highly ADDICTIVE DRUG!

I was dreaming about hot chocolate; but realized that by the time I turned on the light to look at the clock, it was almost 6 pm. Horror of all horrors, the Bistro was closed.

Tonight was the first formal night of this segment of the cruise. This would be my last evening to dine with Ioannis. I was full of anticipation to see who the rest of my table mates would be. I knew a Naples friend, Fran B., had come onboard in NY; & I hadn’t run into her yet. So I stopped to ask the M’D (Norbert) if he knew where Fran would be dining. He said, “yes” (very somberly). So, I asked if it was possible to tell me where she was so I could say hello. He said, “yes”. Then he broke into a grin; & said “she’s at your table”. At first I thought he wasn’t going to tell me; then realized he was yankin’ my chain. 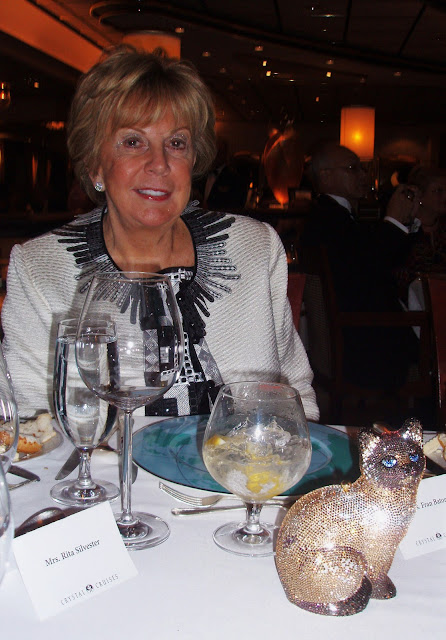 So, I was tickled to death when she arrived. She’s always the life of the party. Our table of 10 was complete tonight with the addition of 2 couples, who I didn’t get to meet night #1 (Rita & Cyril, Lynn & Ed). I was lucky to be seated next to Ioannis tonight; & he worked his magic, encouraging everyone to interact across this huge table. As usual, the Chief treated everyone to his favorite white & red wines. He & I reminisced about last year’s cruise when Fran came to dinner with a jeweled evening purse that looked like a parrot. We had so much fun taking pictures with that purse perched on the Chief’s shoulder. Tonight, she was carrying a beautiful jeweled purse that looked just like a Siamese cat. Boy, would I love to take a trip through Fran’s closet. 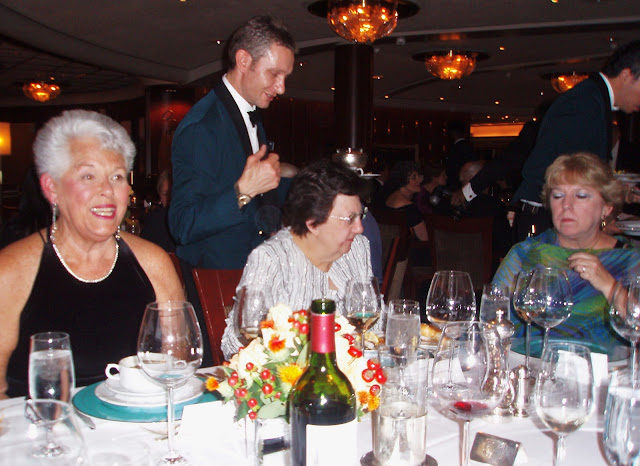 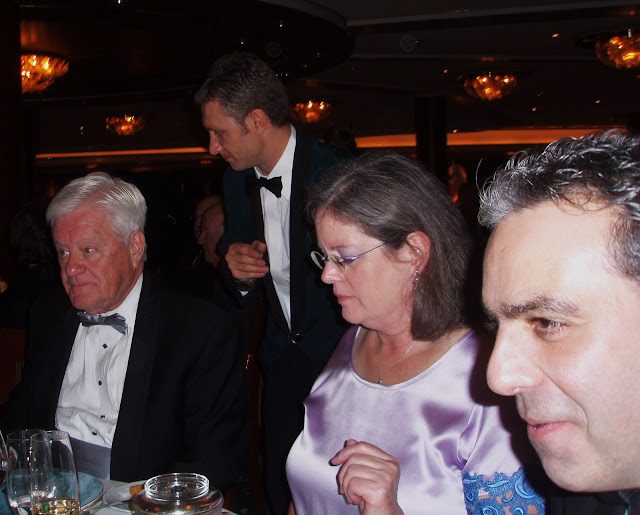 And from Ed, Tracie & Ioannis
I loved tonight’s menu. I tried the pate’ de fois gras. The dish was almost too pretty to eat. There was a thin slice of the pate, topped with a gelee made with sauterne wine, garnished with a thin, crisp wafer & a single orchid. It was served with warm brioche.

Continuing the pasta appetizer theme, I had to try a sampling of tonight’s pasta special tossed with roasted squash, tomatoes, pancetta, garlic & king crab. It was simply luscious. 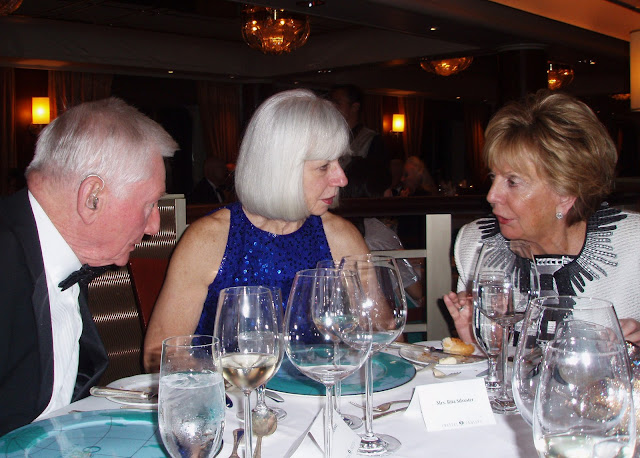 For my main course I had the chateaubriand (rare) with steamed veggies & chive-truffle risotto. I was hoping they would serve the champagne risotto that I’ve fallen in love with in the past. But this version was equally delicious. (I think I could survive a whole cruise eating nothing but their cream soups & risotto.) I let Adem choose some cheese for my dessert. 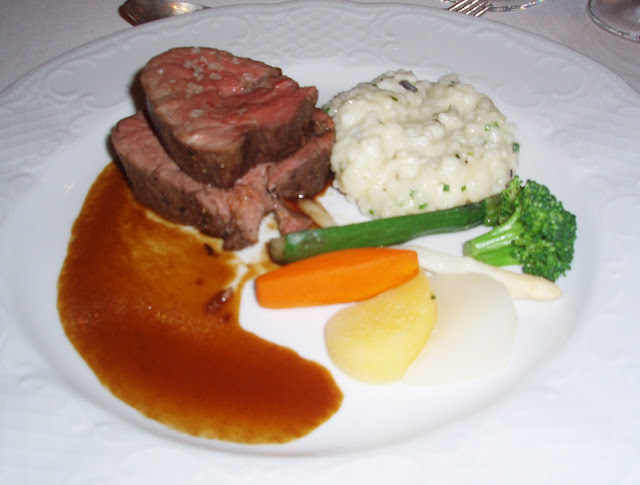 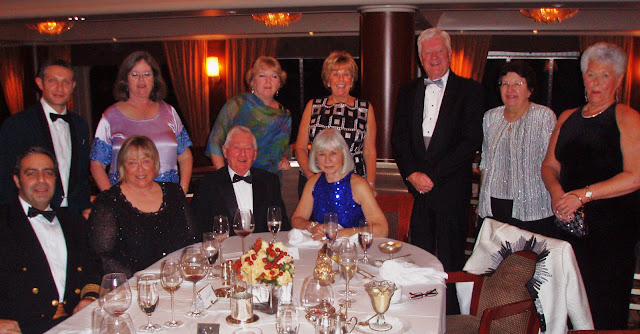 I just had to get a shot of Fran, Ioannis & myself; like old times. 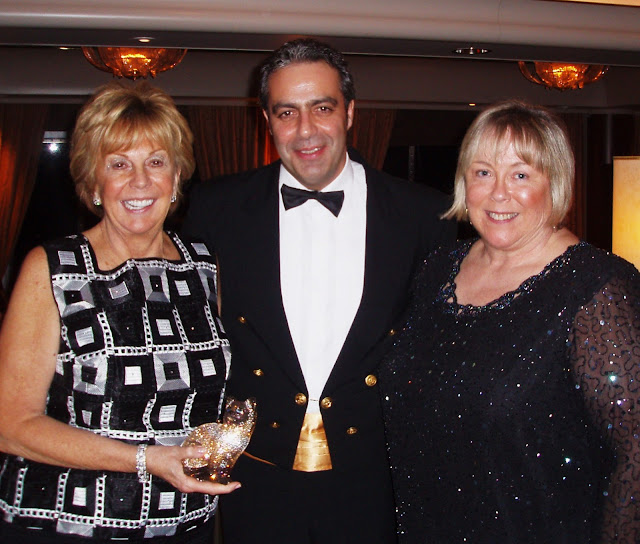 By the time we left the D.R. it was getting close to 11. Everyone went their separate ways. When I returned I found a letter from Mag on my bed. I realized that I hadn’t seen her all day; & she wanted to say “hello” & wish me “pleasant dreams”. Without a doubt, she is the sweetest, most attentive cabin stewardess I’ve ever had the pleasure to meet. It will be hard to say goodbye to her in a few days. I opted to read a while before going to sleep. I’m probably not going to catch up on the blog before I disembark, so I’m not going to knock myself out trying. So ends another perfectly beautiful “Crystal day”. 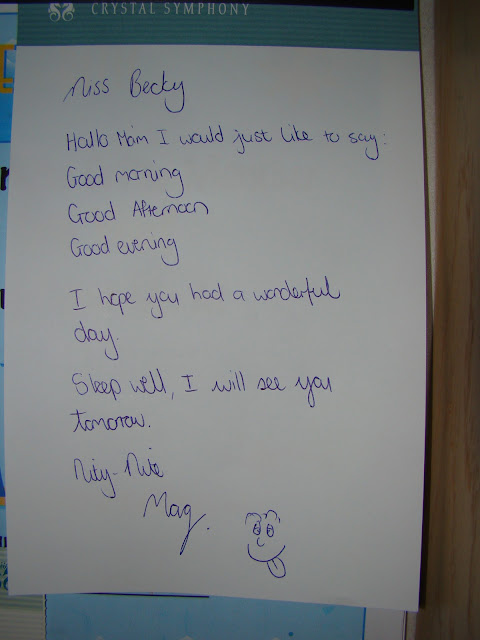