It’s turnaround day in NYC.  By that I mean, it’s the official end of voyage 0225; when most of the passengers disembark the ship & fly away home.  In a few hours, the new passengers will board for voyage 0226 (which is a 19 day cruise that will end in LA).  It’s quite fascinating to be able to stay onboard during turnaround.  The ship buzzes with a flurry of activity.  Cabin attendants are literally flying from room to room; thoroughly cleaning & restocking everything.  Decks & windows are being hosed down.  Tons of provisions are being brought onboard.  Tug boats have pushed an oil tanker to our port side & we started “bunkering” fuel for the next voyage.  I’m sure there is mass chaos in the cruise terminal & out on the streets as hundred of people search for their luggage & line up in the taxi queue.  Back to the REAL WORLD. 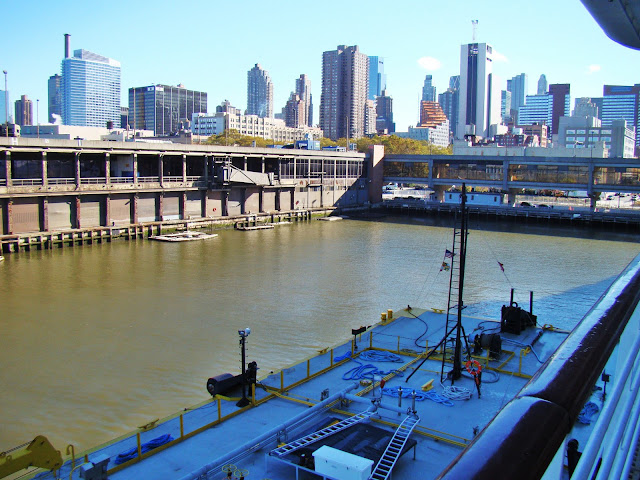 Luckily, I’m still in that protective “” cocoon, for 5 more days.  I made my way down to the Bistro about 10.  Seems all the senior officers were there.  You can tell there are corporate people onboard.  There is some strange activity going on in the atrium.  There is a professional dance couple rehearsing; the Symphony orchestra is playing & the sound/light people are doing a “run through”.  There is a net overhead which is being filled with balloons.  I could see “20th Anniversary” projected onto a screen.  It’s kind of ironic, that during this last segment there was no real mention of the anniversary celebration.  There was no regular gala buffet, nor the extra special anniversary gala buffet that I had read about.  The only sign of 20th anything was one night there was a pretty “Crystal” blue service plate on the dining room table that had “20th” in gold.  That’s it. 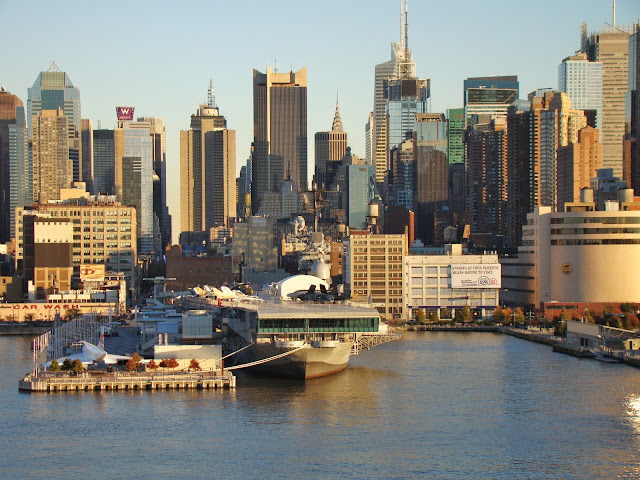 Looks like voyage 0226 is going to be decidedly different.  And I’m only going to get a small taste of it.  I stepped out on deck to take a few quick shots.  I can see the U.S.S. Constitution a few piers to our south.  Can’t see a lot of the NY skyline; but there’s an unobstructed vista of NJ from the stern. 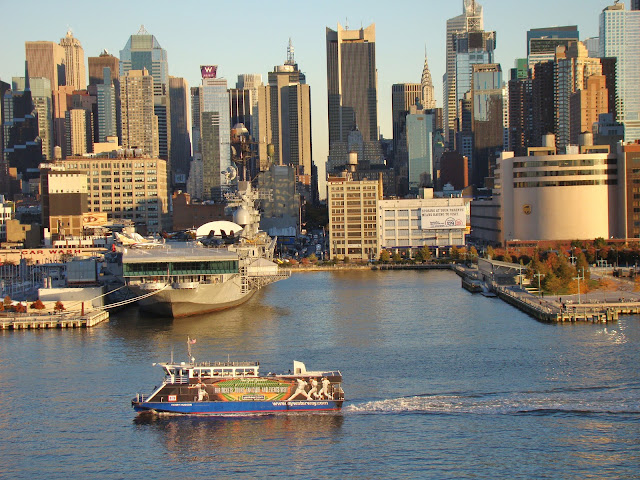 They were boarding new pax before 12 noon; so I went out to look for familiar faces.  I went straight to the main D.R. thinking I’d see Keith & Anne Marie (keith1010); but I heard they had already eaten & left.  I spotted Bill & Carolyn (wrobichaux) at a table; so I sat & had a lovely chat with them for about half an hour.  By this time they were stopping lunch service in the D.R.; so I headed up to the Bistro for a light lunch of smoked salmon, cheese & fruit.  I spotted Keith right away, holding court in a small group outside the Bistro.  I hated to interrupt; but I had to say hello.  We stood & chatted for a while; I knew I was going to like him.  Can’t wait to meet Anne Marie.  One thing for sure, if you want to attract attention, stand next to Keith.  Everyone knows him.  Pretty soon other Cruise Critic people came up to speak.  I met Joy (joyous) & Ricki (ricki) & Steve.  As I was making my way back to my cabin, I met Philip (noosey).  He’s just a few doors down; & he recognized me from my blog. 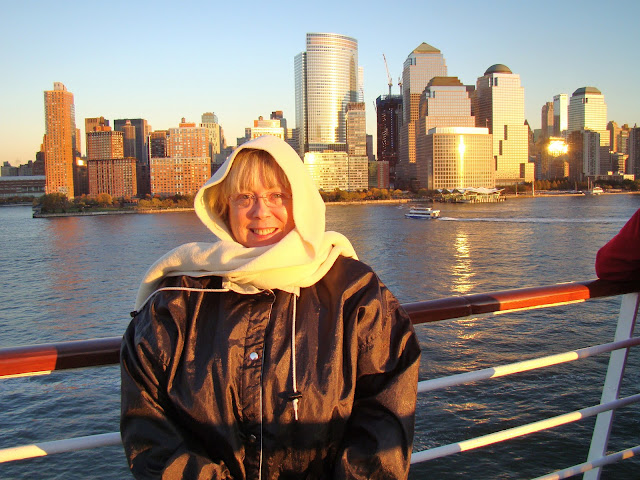 Since they appear to be making a big production of our NY sailaway this afternoon, I guess the least I could do is don the boots, scarf & mittens one more time.  It was a gorgeous afternoon.  A little brisk; had to cover my nose with the scarf.  It looked like everybody was out on deck.  I shot some video (first time with this new camera); but Louis Armstrong was so muted coming over the PA system that it didn’t pick it up.  I’m going to attempt to “dub” an audio file of him singing in with my video.  Having that moving picture with sound would be priceless to me. 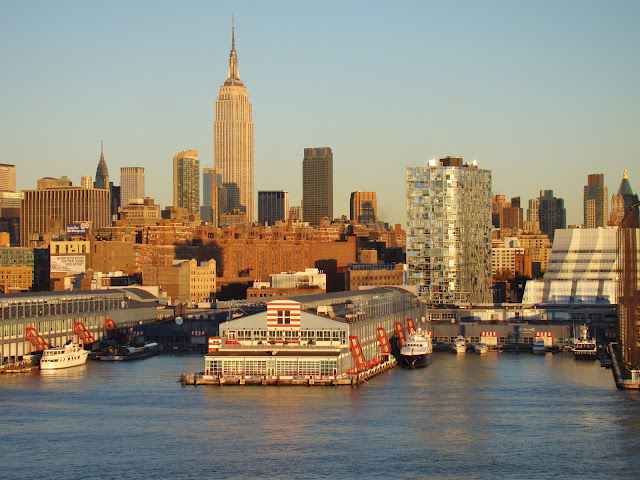 There was just barely enough light when we passed the State of Liberty; & it was completely dark when we went under the .  I came in to warm up; & get dressed for dinner. 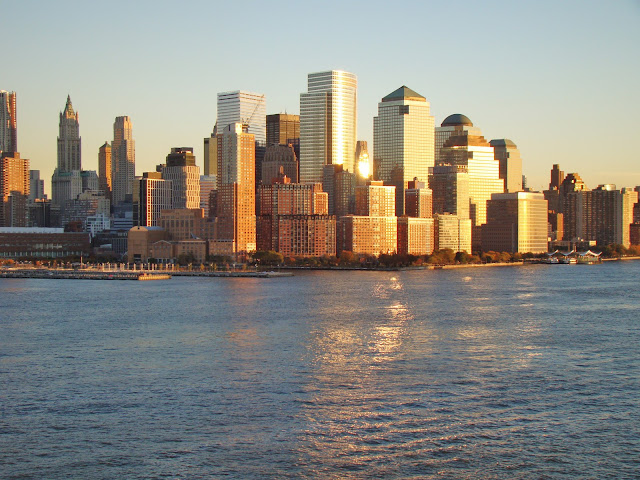 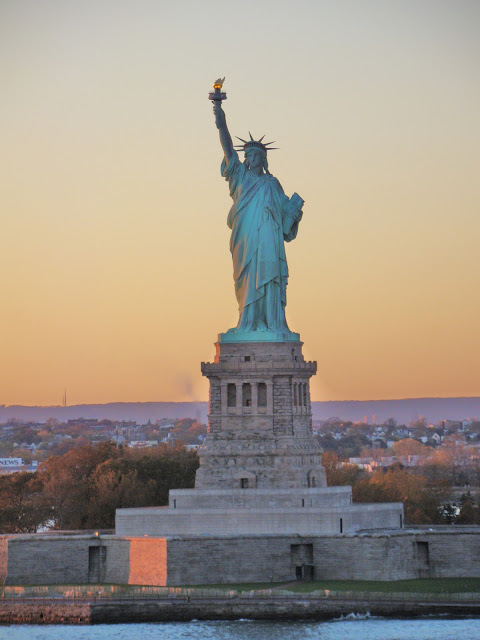 There was an event called the “Ultimate Cruise Bash” held at 8 pm in the Crystal Cove.  Just enough time to check those festivities out before our 8:30 reservations in Prego.  Several dance couples performed; & the orchestra played dance music for the guests. A delightful young man, guest pianist Kyle Esplin, had the house rockin’; pulling off a very good Jerry Lee Lewis rendition of some 60’s & 70’s rock.  There was a movie screen backdrop that showed vintage video of Crystal Cruise sailings; mostly focusing on the .  This was interspersed with funny banter between Paul McFarland & the Asst. Cruise Director. 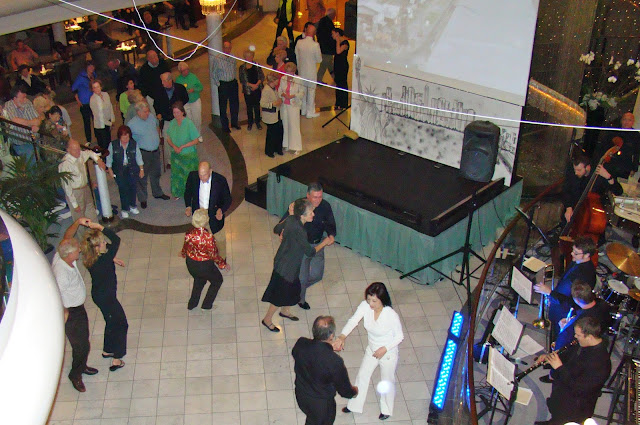 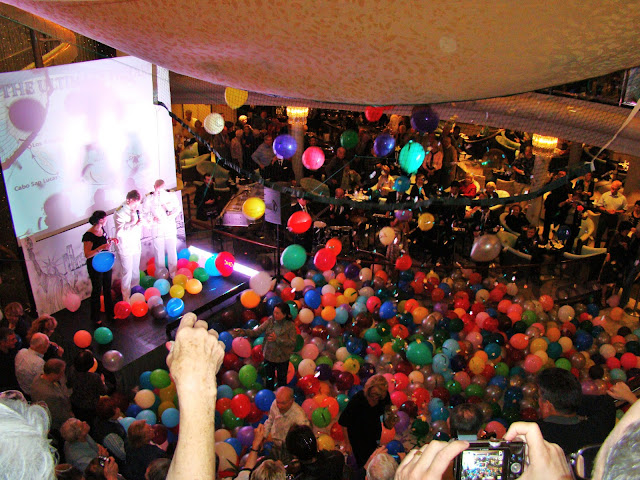 Just at the stroke of 8:30, hundreds of balloons fell from the netting at the ceiling, followed by silver confetti that was blown onto the floor.  It kind of reminded me of the send off that the world cruisers got in Jan.  Everybody’s feet & bodies were swaying to the music; & it got everyone in a festive mood. 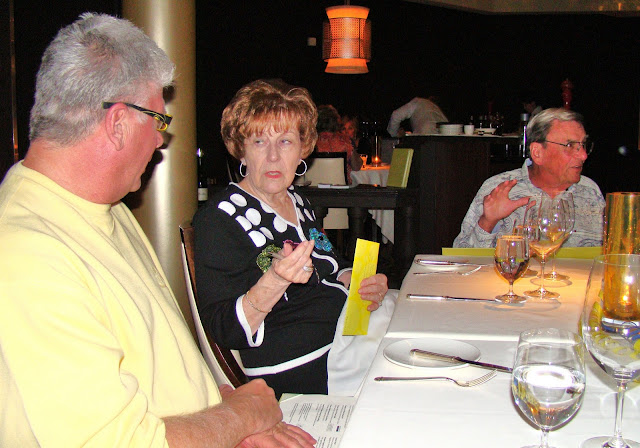 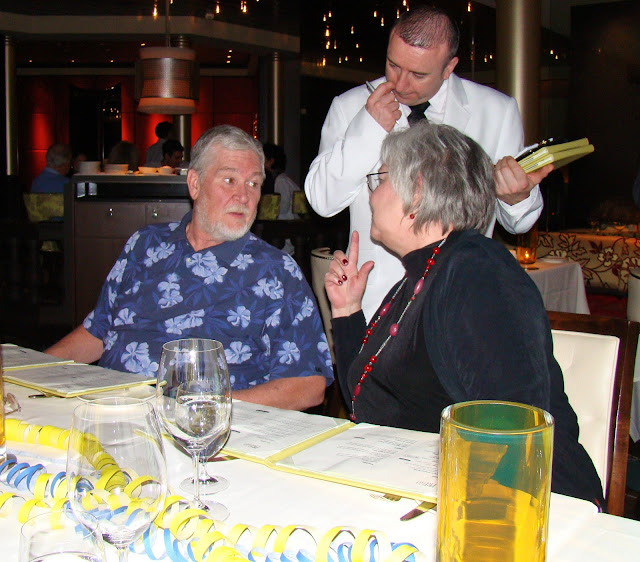 (Ernie & Debbie)
Philip & I were watching the festivities; & realized we were about to be late for dinner.  Almost everyone was waiting for us in Prego.  It was such a joy to finally meet Nicholas, Michael, Joy, Pete, Ernie & Debby.  Everyone got so engrossed in conversation.  And our dinner didn’t wind down till 10:45. 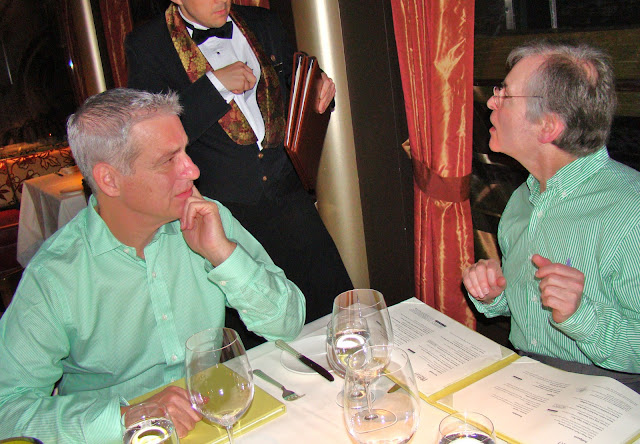 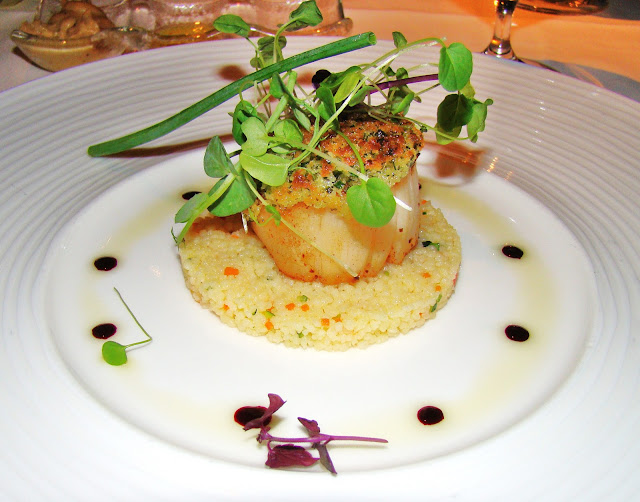 I had an outstanding appetizer of seared scallops drizzled with a merlot-red beet glaze & sitting on a bed of citrus cous-cous.  This was followed by a Caesar salad; & an entree of herb crusted rack of baby lamb & rosemary sauce with a "tower" of eggplant & zucchini parmigiana & white bean cremolata.  Debby had ordered several appetizers & let us have tastes.  I had my first sampling of duck (quite good). 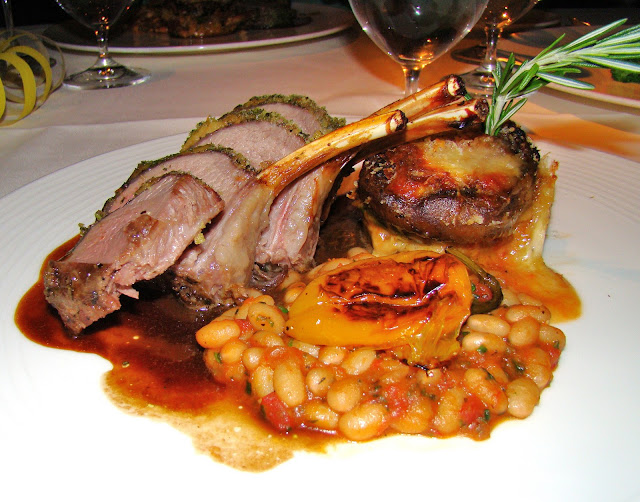 And at the end of the meal, the waiters came out with a rather unusual cake & sang Happy B'day to Philip (who celebrated a big one last Sat).  We were all so stuffed.  And I couldn’t wait to get home & get in the jammies. 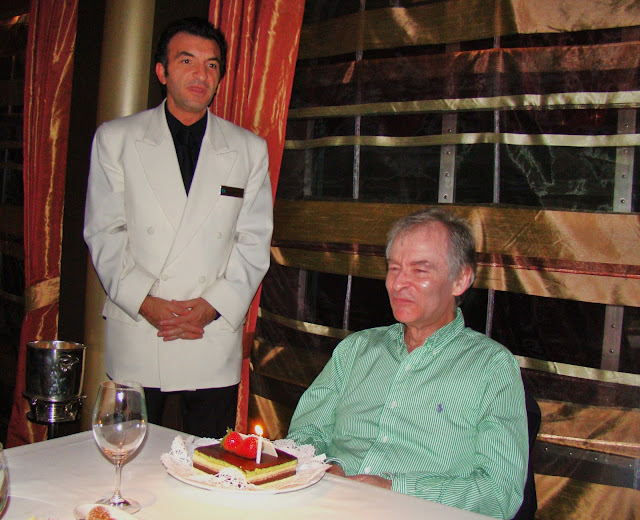 SPECIAL NOTE:  The Capt. notified us by letter that we will be arriving approximately 2 hrs. late in tomorrow.  There has been recent whale activity along the Eastern seaboard; & law mandates that ships reduce their speed to 10 knots to protect the endangered right whales.  To compensate for the lost time; the ship will depart PHL at 7 pm instead of 6 pm. 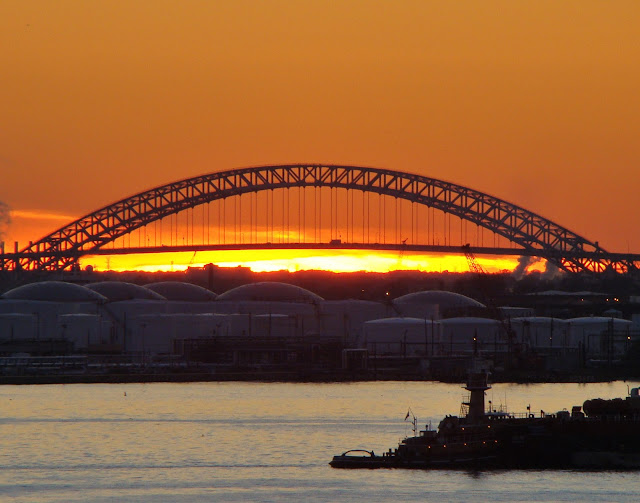