FACTOID: Did you know that Philadelphia is the home of Urban Outfitters & Tasty Cakes? And that there are several thousand murals painted on walls throughout the city? Me neither! But the city had such a problem with graffiti back in the 80’s; that they set up & funded a foundation that encouraged “street artists” to turn in their spray paint cans & take up serious art. As a result, the city’s buildings were turned into works of art! 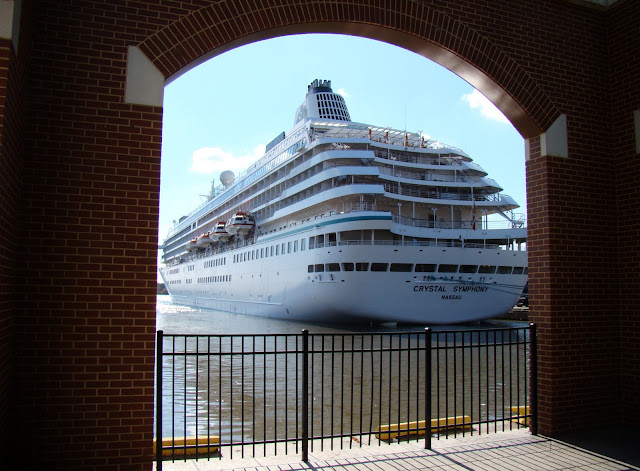 I was dead to the world when the alarm went off about 9:15. My morning tour was scheduled to depart at 10:15; & I wanted to at least get a bite of breakfast beforehand.

I didn’t put much effort into the face or hair; I just dressed & made a quick dash to the Bistro. I got my capp’o & some fruit to bring back to the cabin. I sat on the sofa-ette & watched as we slowly crept into port. I was surprised to see so many aircraft carriers (probably decommissioned). I was told later that we were “escorted” in by a boat with machine guns mounted on them. Extra precaution for this heightened state of security that we are currently in?

I joined my tour group in the Starlight Lounge a little after 10; but we weren’t going any where soon. We were still trying to back into our berth. Then there was the tedious procedure of securing this ever-so-long & winding metal “catwalk” of a gangway. It took a long time to go such a short way to the pier. Anyway, they finally called our tour about 10:30. The sky was so perfectly blue, a little breeze & 45 degrees (it did make it up to the mid 50’s by late afternoon).

My tour was Philadelphia by Trolley (PHL-A). I was assigned bus/trolley #5. Our darling guide was named Evy Simon; & she was dressed in period costume & carried a parasol. Our driver was Eric; & we were escorted by Joanna from the ship. 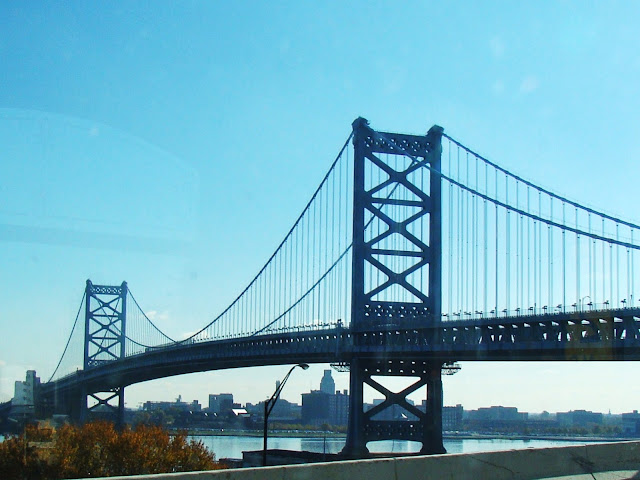 There were 3 trolley loads; & they were crammed full. I ran for the back row; but had to stick to my one seat on the left side. Seemed like all the good stuff was to be seen from the right side of the trolley. It turned out to be an extremely bumpy ride; & noisy with all the assorted rattles that come with such an old “vehicle”. But I shot photo after photo anyway. We took an interstate highway into town. We quickly passed the decaying S.S. United States; & all the PHL sports stadiums/arena, which are all side by side. 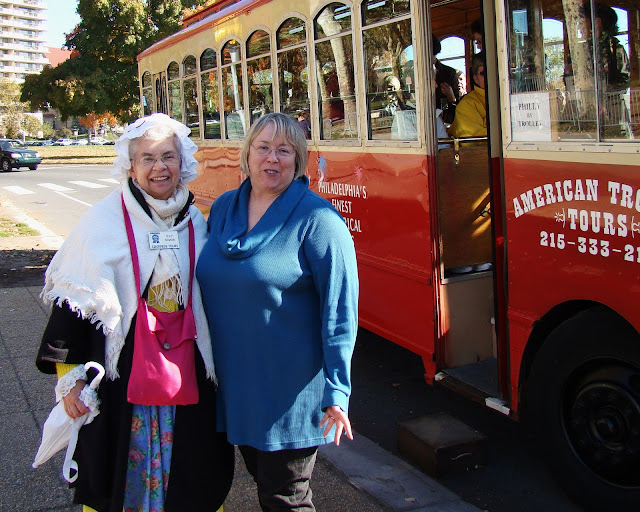 I’m afraid my “drive by” tour of Philly didn’t do it justice. It was such a gorgeous day; but the photos taken from a bumpy, speeding trolley window were disappointing. I just got a quick glimpse of places now & then; & only one real stop, which was the Philadelphia Museum of Art. It’s a lovely building, which unfortunately (or fortunately) has one big claim to fame……a pivotal moment in the movie “Rocky”, when Rocky Balboa triumphantly climbs the steps. Although I can’t speak from experience, I’m sure the art to be found there is outstanding. 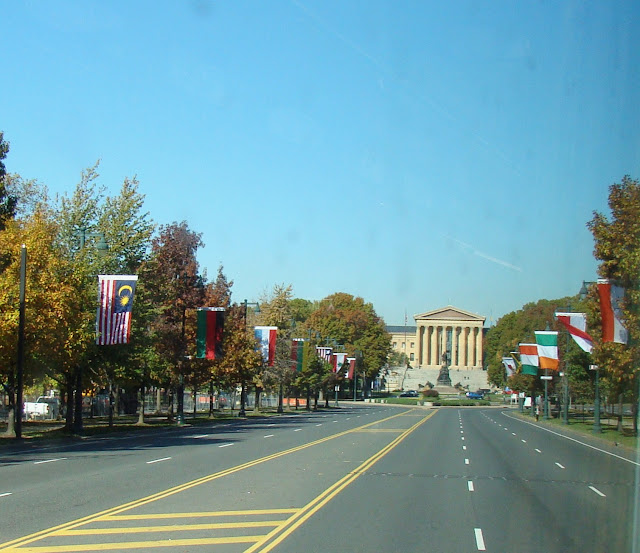 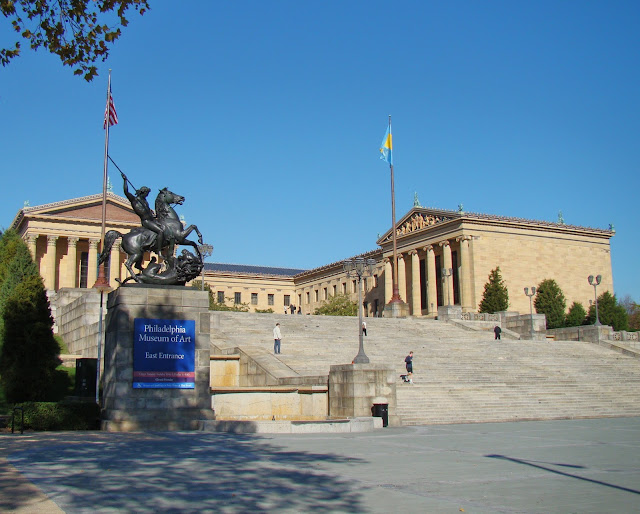 The city is filled with quirky pieces of artwork & a contrast of both old & new: 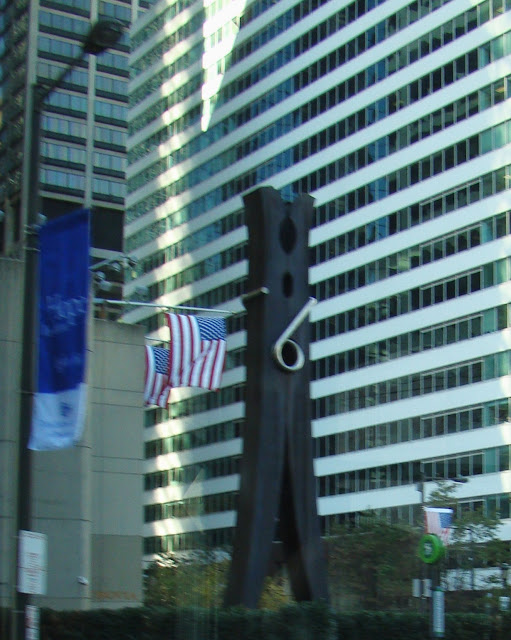 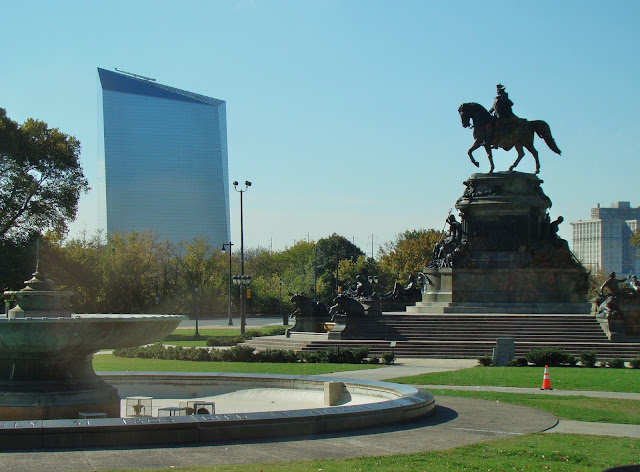 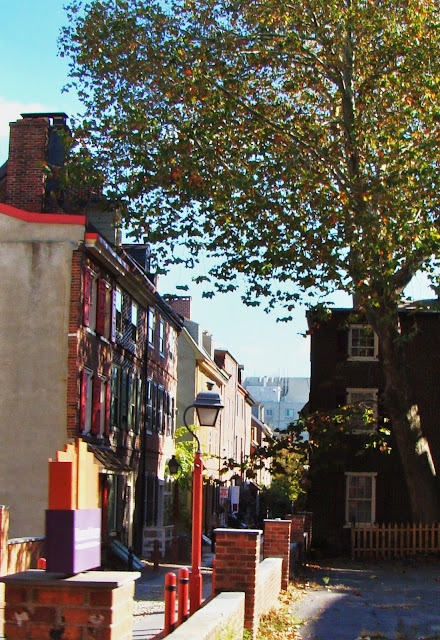 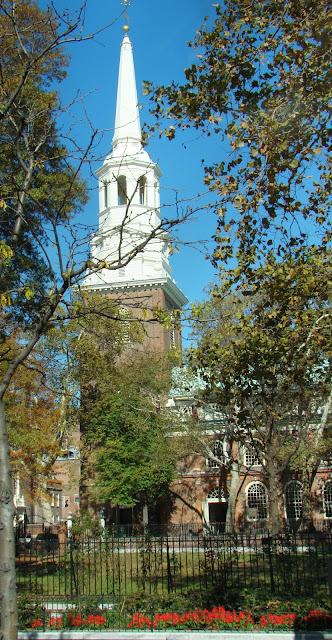 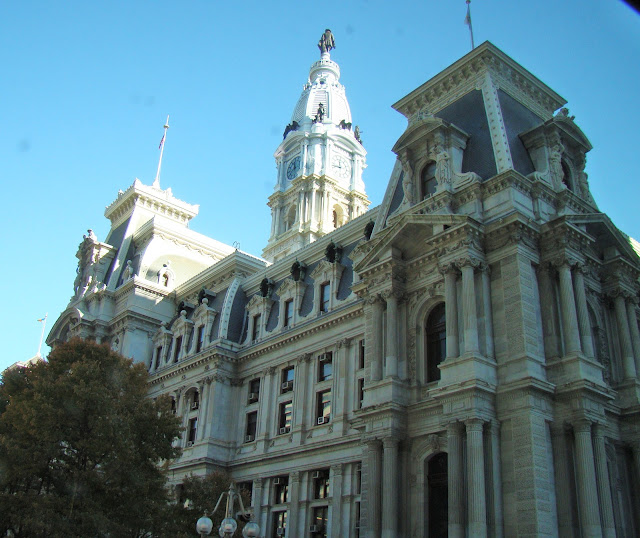 We drove (quickly) past the building where the Liberty Bell is housed; & lastly drove past Benjamen Franklin's grave where custom has it you throw a penny on his grave: 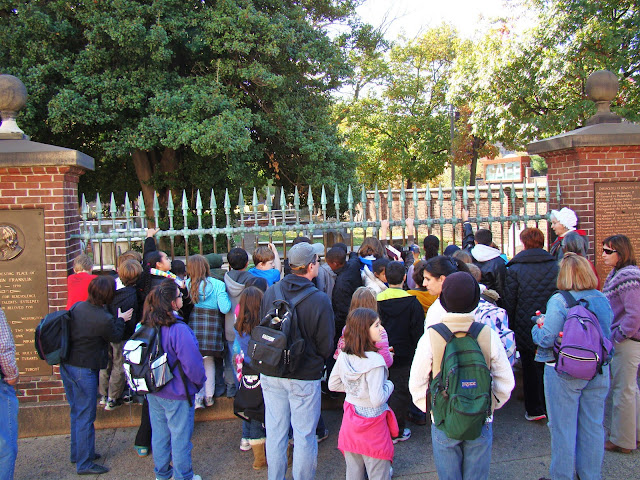 Back to the ship for lunch. I decided to eat in the main D.R. I was seated at table 3A; & I’m afraid Cristian & Marko’s service was as slow as Christmas. I should have gone off ship for the real thing; but instead I settled for a “pseudo Philly cheesesteak” sandwich with fries. 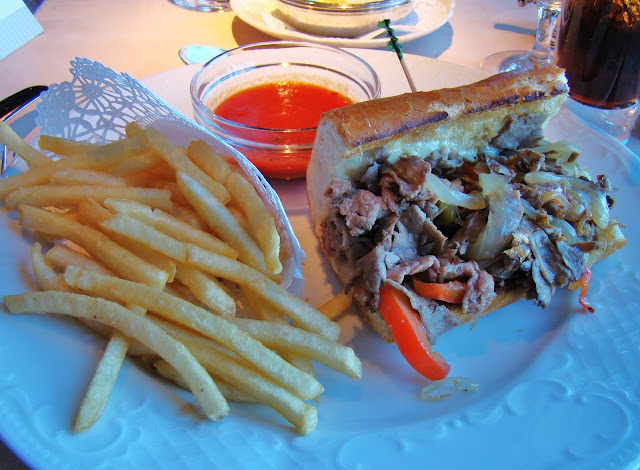 Some passengers had invited guests onboard today. I could hear people at a large table nearby talking about how beautiful the ship was; & how they wanted a tour of everything. I became mesmerized by an older gentleman at that table who had his back to me. He was wearing a visor; & the spikiest, punkest-looking (grey) hair I’d ever seen on anyone over 18. I zoomed in on him with my camera; & a logo on the visor read “flair hair”. It finally clicked that the spiky hair on top wasn’t his….it was part of the visor; & it matched his own hair perfectly. What a brilliant idea! And not that this has anything to do with Philadelphia; but it was an amusing diversion during the long wait for lunch to arrive. 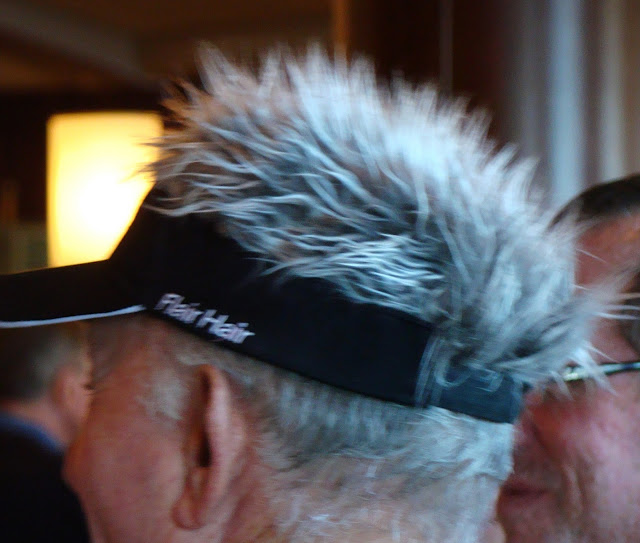 After lunch I checked e-mails & made a few phone calls. I got news that my elderly cousin (Lolita) had fallen & broken her pelvis. As sad as that is, there was nothing I could do; & was assured that things were under control. And I was relieved to talk to the elderly woman that I help; & found her in good spirits. With the help of friends & neighbors, they are doing an excellent job of checking in on her & cheering her up.

In a while I went down to the Bistro for some hot chocolate. Chuck (Exec Libra) passed by; & said he would see me at 7:45. I went completely blank; had totally forgotten that the "meet & mingle" was tonight (for some reason was thinking it was tomorrow night). Ernie sat down for a cup of coffee & chatted for a while. Next thing I knew it was after 6; & I had a party to get dressed for.

Not only did we have difficulty this morning getting situated into our berth in Philly; we had just as much trouble getting underway. The Capt. made the announcement that we would be leaving soon & what the weather conditions would be. Yet, we kept sitting there. It turned out that a cable broke on that (ever so long) catwalk gangway. They were having trouble “untethering” us. We finally left about 15 mins late. 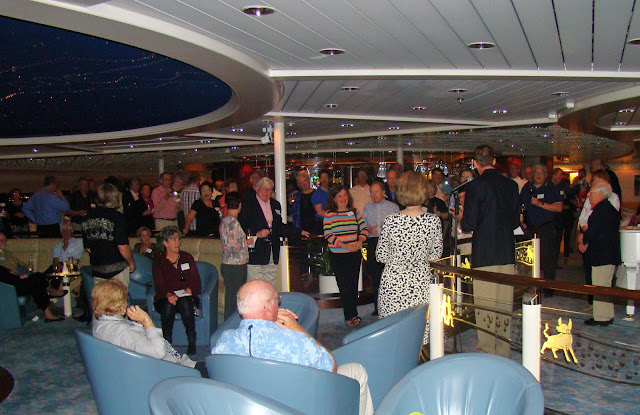 This evening Crystal hosted a private cocktail party for all the Cruise Critic folks onboard. Finally, a chance to get into one room with all the people I’ve been “talking” to for years. As hard as I tried to work my way around the room, there was nowhere near enough time. The Palm Court was packed. Keith (keith1010) stepped forward & welcomed everyone. He made a lovely speech about our dear friend, Judith (judith02) who wasn’t able to sail with us this time due to health issues. She’s our leader; & it just wasn’t the same without her there. She had worked so hard to arrange special dinners & private shore excursions. 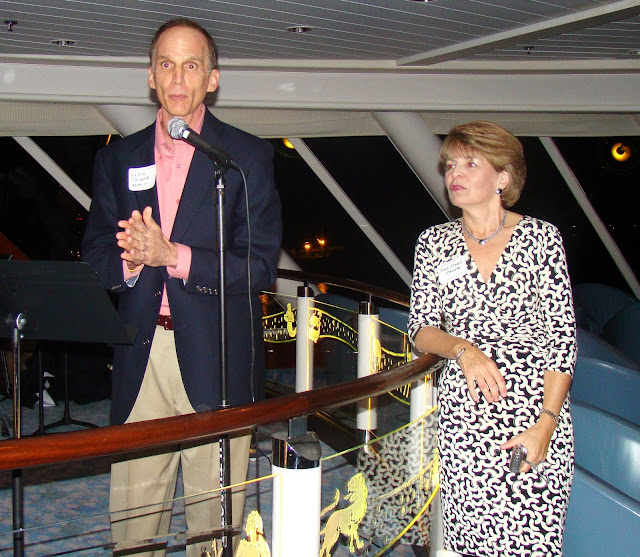 Here I am with Celeste (Katrina's grammy): 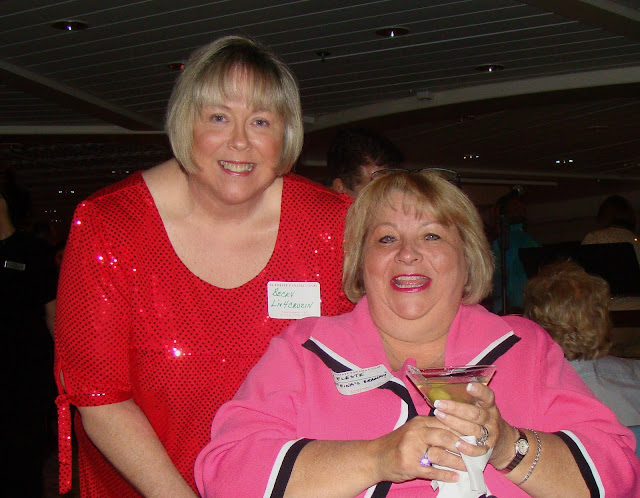 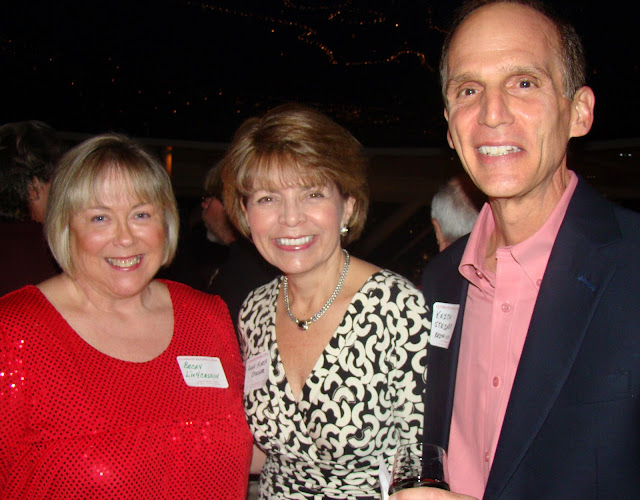 And with Chuck (exec libra): 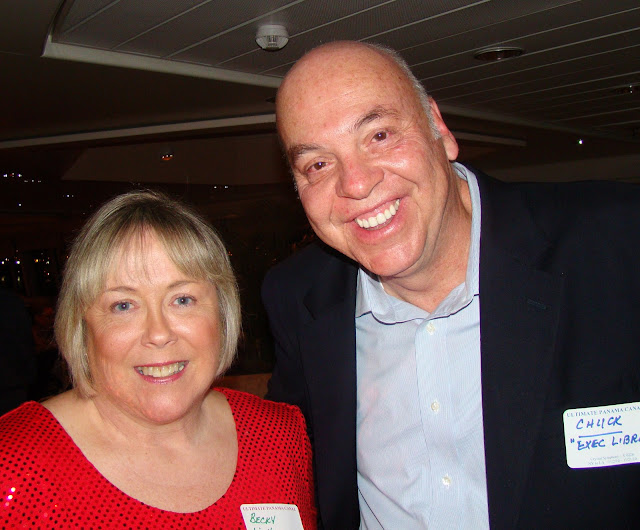 Time just flew by. I suddenly realized the room was emptying; & I was still talking; & 15 minutes late for dinner.

My first time dining with my new tablemates; & there were only 4 of us, ladies only. Marion, Tracie (Cruise Critic name, “TERR777”) & Joan. I sort of felt the odd man out since I was absent the night before; but I enjoyed their company just the same.
I had a fantastic dinner; starting with marinated white asparagus with a lemon vinaigrette & a confit of tomatoes, shallots & olives. It was plated beautifully. 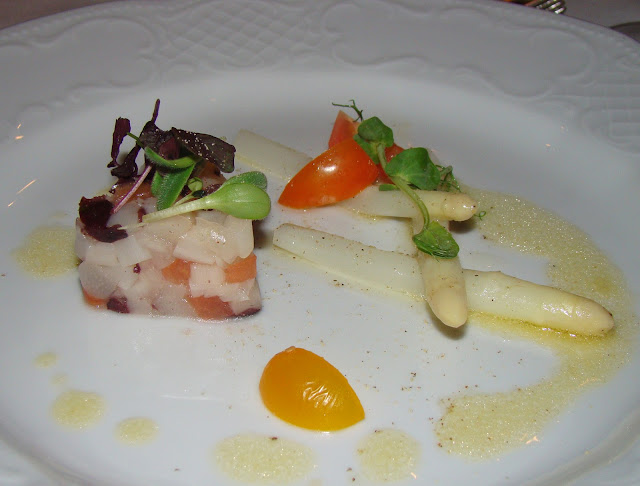 I was on a roll with the pasta specials; so I had an appetizer portion of cappellini with broccoli pesto, walnuts & brie with a light cream sauce. 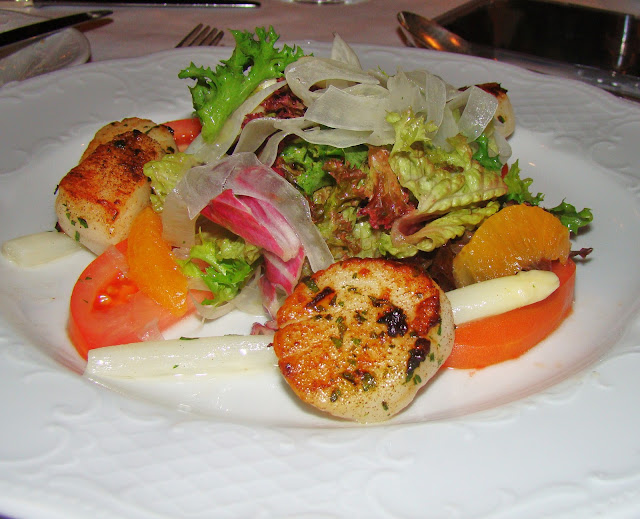 I had the salad entrée of baby lettuce, tomatoes, white asparagus, orange segments & marinated fennel. This was topped with porcini mushroom dusted pan fried scallops. It was outstanding. I finished the meal with another great selection of cheeses & mango chutney.

Back to the cabin to get comfy & start work on the blog. Took a lot of photos that must be edited; but don’t know how long I’ll last with ship's movement lulling me into laziness. A sea day tomorrow in which to relax & maybe get caught up again.
Posted by Unknown at 7:50 AM