Well, I must say I slept like the dead last night (was it because it was Halloween)? I think I only got up in the night once. At 10 am, I was ready to face the day. It looks like a gorgeous day out there. I packed up my “office” & parked in the Bistro to see who was out & about. Some of the crew looks a little “tired”; I saw no sign of Mag when I stepped out of the cabin. 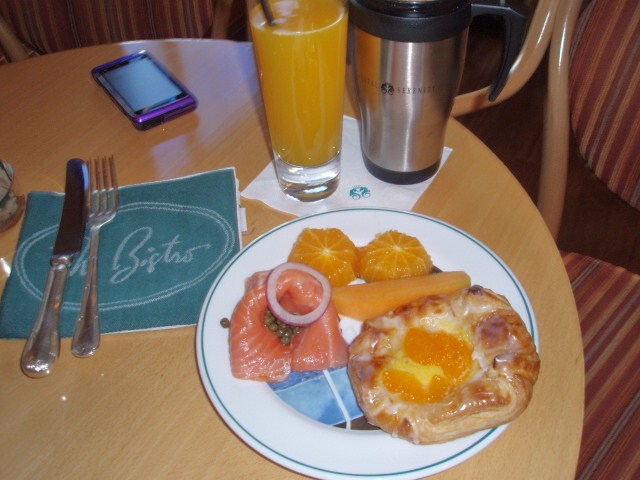 I had my capp’o & some salmon & fruit off the buffet; watching all the people walking off the gangway. Saw the Chief in street clothes again. I thought he said he had to do all his shopping yesterday; & then let the asst. chief take the day off today. I soon heard a voice & looked up; & saw someone that seemed out of place. There stood Dave (CrystalKid); who I will always refer to as “Boston Dave” (after all, he is from Boston). He & a few friends were “visiting” onboard today. I whispered to him that my heart will always belong to the Serenity; & he admitted that his does too. Although the crew on both ships are outstanding; the other ship just “fits” us better.

About 12:45 pm, I decided to cruise through the Lido buffet. I sat down & that cute little “Gilbert” (who served us yesterday) came running over; & asked if I needed a Doctor (Pepper). (Their minds are like steel traps.) I sat for a while, reading; & went up to fill my plate just before the buffet closed at 1:30. In a few mins. Ralph & Doris sat down with their plates at my table. Alice had gone into town to have lunch with friends. I really enjoy being around those three. 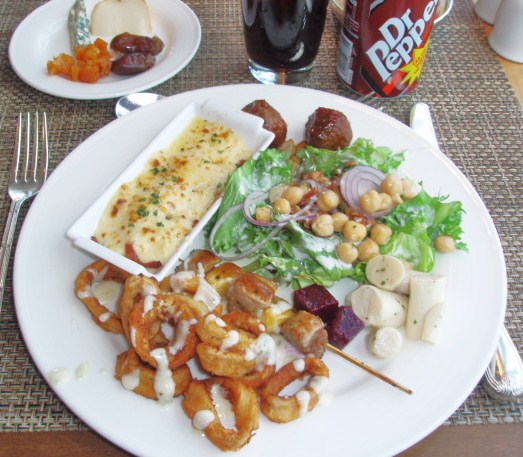 Today’s lunch consisted of: a mixed salad, hearts of palm, pickled beets, 2 meatballs with “dragon sauce” (nice, spicy flavor), fried calamari with lemon aioli, a chicken/pineapple kebob, & a fabulous casserole of ham & leek au gratin. For dessert I had some bleu cheese, camembert, dates & mango chutney. Just enough; & not too much. Good meal, good table talk.
By now it was 2:30; too late to get off the ship. So, as it turns out, I would not see Boston this trip (which was perfectly fine). I made some phone calls; & came in for a nap. I woke when I heard the Capt’s voice, announcing that we would be sailing soon. I figured I should at least go out on deck & see what I could see of the city. As soon as I opened the deck door, this rush of cold air took my breath away. I headed back to the cabin for my jacket, gloves & muffler. When we started moving down the channel, the wind would cut right through you. The TV showed the temperature to be 43 with 31 mph winds. Not sure what that makes the wind chill; but it was frigid a$$ cold! 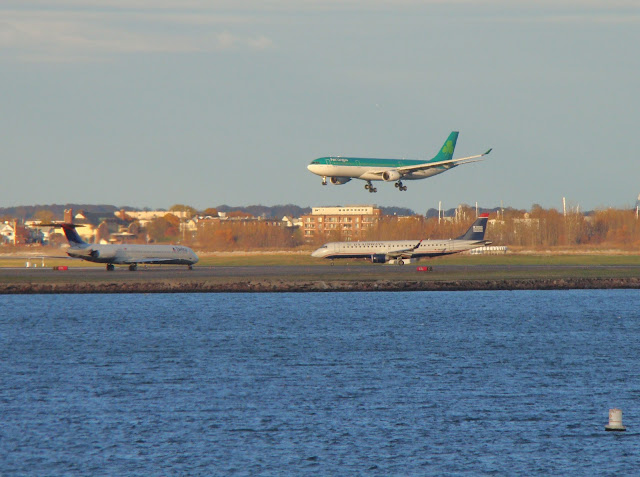 My first observation, that the airport sits right on the edge of the Bay. The air traffic in & out was crazy. 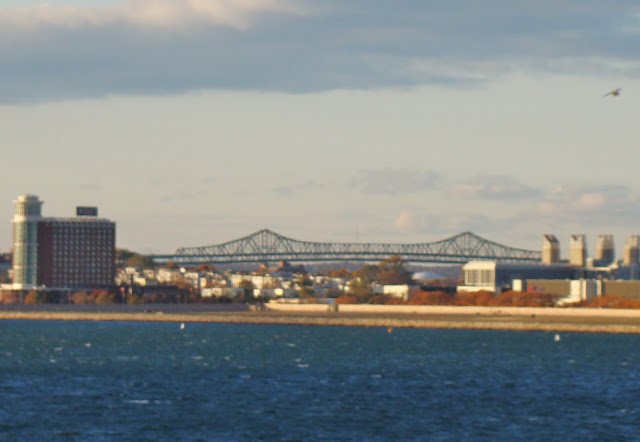 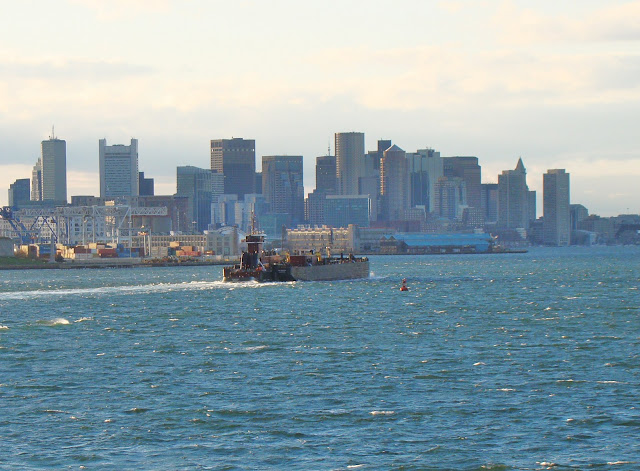 I got a few shots of the skyline; & by then my fingers were starting to get numb. And here I thought it was going to get warmer the further south we went!

Then I had to come in & get under the covers to get warm again. Tonight is our last formal night for this segment; the last dinner with the Chief. I didn’t go to the Capt’s Farewell Cocktail party; just went straight to the D.R. Tonight, the place cards had Pauline & Alice on either side of the Chief. Alice had brought cute little Halloween trick or treat bags for all of us with a few chocolates in them. She had some for the Chief & for our wait staff. She’s just the sweetest thing. I brought a sample of Michael’s handwriting for her analysis. Some of the things she ‘read’, didn’t necessarily sound like the person I know. Maybe after 22 years, I don’t know him quite as well as I thought I did. It will be interesting to see what he thinks after I tell him what she “sees” in him.

During the early part of dinner, someone came over & spoke quietly with the Chief. Then he got kind of quiet; & I mouthed the words “should we be worried”. And he said “no, it’ll be fine”. He kept looking at his pager; all kinds of stupid, scary things were going through my mind. (A bomb threat……man overboard???) After about 10 mins, he looked at his pager again; & he seemed to relax. I mouthed quietly, “should I stop worrying now”; & he laughed. Whether it was just a coincidence; but around that same time, the ship started to shimmy/vibrate a bit. He said we would be sailing very fast tonight & the winds were picking up. Maybe we’re moving too fast to use the stabilizers. So far, the scariest thing that’s happened on this sailing……..as of yesterday, we’ve run out of blueberries. I personally think it’s because Pauline & Ralph have been eating way more than their share. They like them piled high on their nightly ice cream.

For dinner this evening, I started with one of my favorites. Chicken liver parfait with black truffles; served in a lovely stemmed glass over port wine gelatin, sprinkled with tiny bits of pear confit. On the side is a piece of warm brioche to spread it on. This stuff is divine! 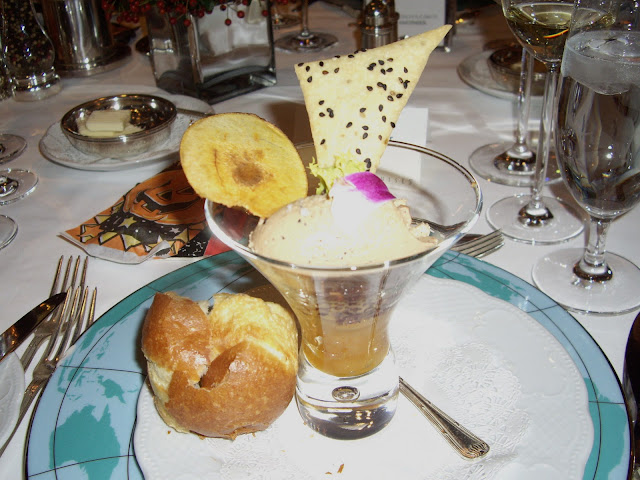 The pasta specials continue to entice me; tonight I tried an appetizer portion of angel hair pasta with pesto, truffles, tiny bay scallops, white beans & small cubes of new potatoes. Normally pesto, doesn’t excite me. But anything with truffles & scallops can’t be all bad. It was very, very good.

For my main course, I followed Adem’s suggestion & had the veal medallions. Two perfectly round, thick circles of meat covered in a creamy chanterelle mushroom sauce. I asked to substitute the accompanying vegetables with two items that I love from the side dish menu: champagne cabbage with caraway seeds & a few sweet corn fritters. Awesome meal!

Ivo came over; & said he found some mango chutney to go with my cheese plate tonight. (I also gave him, our friend, Judith’s best regards & an update on her health. He sends his best right back atcha, Judith.) I do love their mango chutney; but what I can’t seem to explain to them is that I want this chutney they serve on Serenity. I’m not sure what it’s called; but it tastes exactly like the filling that goes into a “minced meat” pie……cinnamony, clovish tasting raisins & finely diced fruit. Anybody know what this stuff is called? On Serenity, they called it “chutney”; & yes, I know there’s probably hundreds of different kinds. But it’s perfect with certain cheeses. I let Adem choose my cheeses again tonight. One very interesting flavor I had never tried before, cracked pepper goat cheese. It was really delicious. Of course, the Chief had several wines at the table; & I was fanning (hot flashes) all night long. It’s either the tuxedos or the wine; both will do the trick for me.

We left the dining room about 10:30; & by now the ship is “shimmying” really good. Maybe this will be my best night’s sleep yet. So, forgive me for hurrying through this so I can find out for myself.
Posted by Unknown at 11:51 AM