Cape Horn & Crossing Drake’s Passage
: – Sunset:
I was sleeping pretty soundly when I felt the ship shimmying a little after 7.  Instinct tells you turn on channel 40 to check the bridge camera.  Turning up the volume, I learned that we were pausing at the tip of .  I thought I’d best run out & document this momentous occasion.  I threw on some jeans & my coat over my gown. 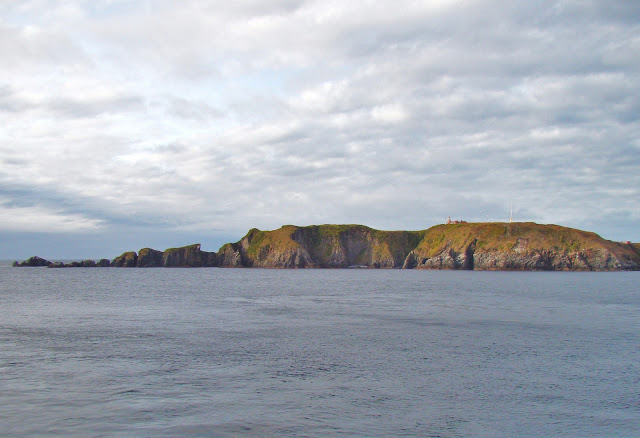 Cape Horn (the southern most tip of South America)


The seas were dead calm; & I was surprised that it wasn’t colder than it was.  There was a small expedition ship (the Stella Australis) at anchor; & they were ferrying their Pax over in zodiacs for a closer look at a monument dedicated to all the sailors who had died in these treacherous waters. 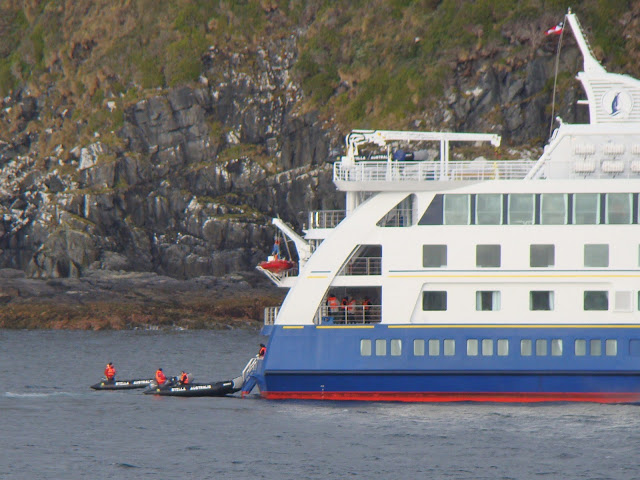 The only other structures that appear to be there are a radio tower, lighthouse & a small Naval barrack.  We were told that once we got underway again, we would start to feel motion as we moved SSE of the  & into the spot where the Atlantic & Pacific Oceans converge. 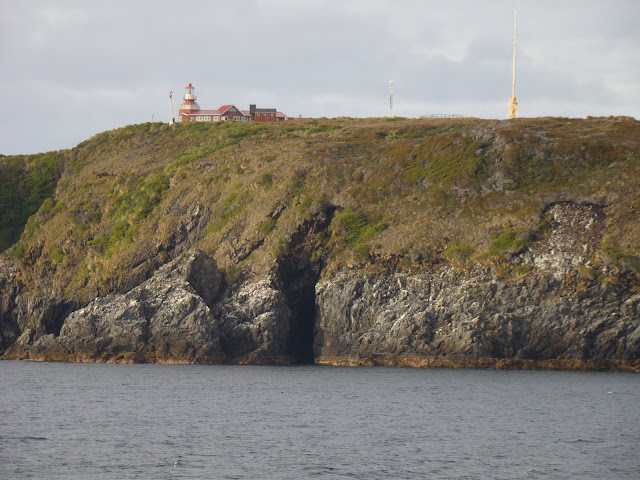 It appears that our timing couldn’t be more perfect; as we are making the passage in between 2 low pressure systems.  Sure enough, with the wind at our back, there is a very soothing pitching motion to the ship.  Enough to make me happy; but not freak out everybody else.
I jumped back in bed for another few hours; & woke up with a nasty coughing spell.  I put on some clothes & gasped when I took a look in the mirror.  I actually look unwell today; but I ventured out for breakfast anyway about .  Fortunately, it wasn’t crowded in the ; & I ate quickly.  I had a bowl of fruit; mushroom & cheese omelet & some bacon.  I fixed a double hot chocolate (using hot milk) in my () mug; & downed 3 glasses of grape juice (upon doc’s advice).
I walked out the back of the into the Retreat area for some fresh air.  I sat at a table protected from the wind; drank my hot chocolate & enjoyed watching the rise & fall of the ship’s stern on the horizon.  I contemplated grabbing one of the steamer blankets; & staying a while; but knew that wasn’t too wise.
Back in the cabin, I didn’t feel like reading or editing more penguin photos.  So, I got in bed & slept.  I knew I wouldn’t miss any important scenery outside, because there isn’t any (at least until tomorrow afternoon).  Another coughing spell got me up at 4.  A quick check of the bridge camera shows grey skies & some fog.  I can see the deck at the bow of the ship is wet; so it’s obviously been raining.
The ship’s nurse called to see how I was feeling.  I told her I had a nasty headache & felt more foggy headed.  She asked if I had a fever; & so far, I haven’t had.  When I got back on the computer, I read on the C.C. message boards that my friend, Lou (drtee), was ill.  She has a fever & the doc quarantined her in her cabin for 24 hrs.  I have heard a good bit of coughing around the ship the last few days.  But as far as I know, a sinus infection isn’t contagious.  And I’ve been extremely careful with coughing (inside the front of my blouse), handling Kleenex & washing of the hands.  Almost obsessive about it, in fact.
I was beginning to get hungry about ; so I went up to the restaurant.  Most nights I’m surprised at how many Pax are having their evening meals up there.  Maybe they don’t want to miss any scenery in the dining room (although there is nothing to see tonight out there).  Or maybe, like me, they just want a totally casual experience.  Another thing that seems funny to me…..I see people every day that I’ve never seen before (this ship is mid size at best).  And then there are a handful of “strangers” that I see all the time.
Anyway, back to dinner.  I started with the eggplant caponata appetizer, very good.  The “Dam” bacon & cabbage soup sounded really good; but there was a thick layer of grease floating at the top of the cup.  Now, I’m not one to shy away from bacon grease; but it was just too greasy, even though the flavor was robust & delicious. 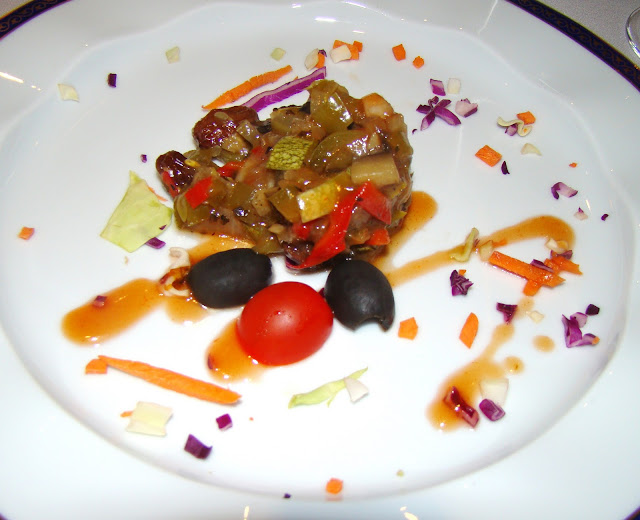 For the main course, I had braised lamb shank & savoy cabbage (it had very little taste).  I also had smoked bacon & white cheddar mashed potatoes.  If there were bacon or cheese in there anywhere, I didn’t find it.  Tasted like plain ole mashed potatoes to me. 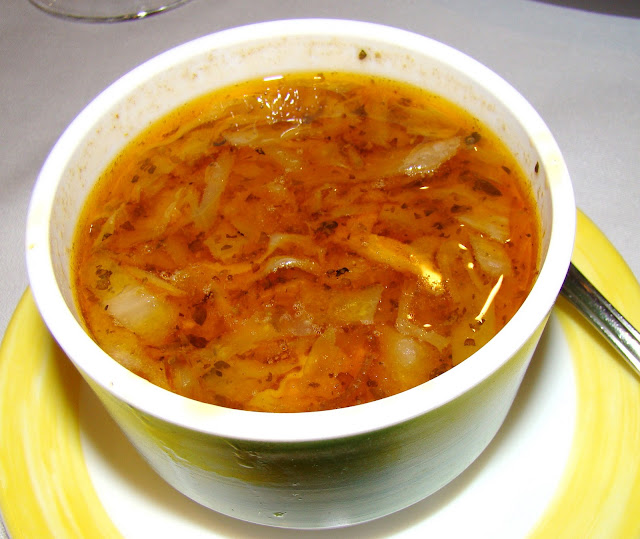 For dessert I tried to crème catalana (some type of flan).  Hmmm, I don’t know what to say about it; it didn’t have much flavor either.  It’s the first time I’ve left the table with a good amount of food on my plate.  That’s why I don’t think it warrants pretty photographs.
Just in case, I made a small bowl of mixed salad to bring back to the cabin in case I needed a snack (if I make it that long).  It’s ; & I’m settled in for the night.  Looking forward to seeing the beginning of the around tomorrow.
(Sorry, no towel animal tonight……I didn’t even let the steward in here today.)
Posted by Unknown at 9:00 PM