I was up & down a lot in the night; but I did manage to get caught up on some sleep.  Turned on the TV to see the start of our transit through the Beagle Channel.  The sun is shining; the temp is 43 degrees; & the winds are gusting up to .  But on TV the seas don’t look or feel rough at all, which I find surprising.  I probably should have tried to see the doctor this morning; but I’m determined to go on today’s shore excursion (more wildlife).  And if I’m really lucky, find a pharmacy in town to buy some cold medicine. 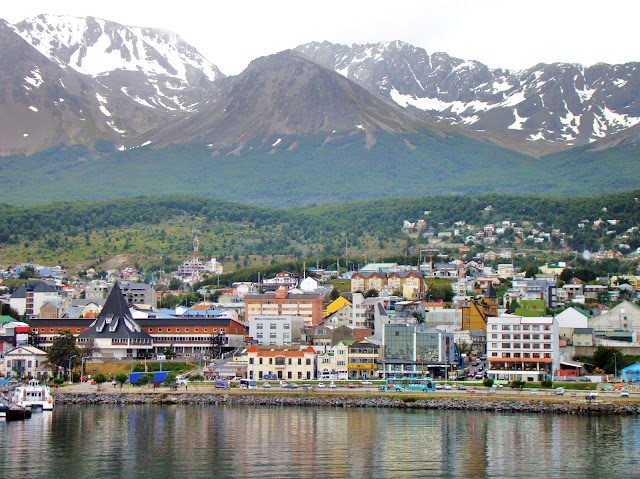 The Capt made an announcement about warning us that we would be making a hard left turn; & to expect the winds to cause us to list to port.  We obviously were arriving into Ushuaia early.  I ventured out of the cabin about 11; & planted myself near the electrical plug on the port side of the .  There were snow capped mountains on both sides of us (I know I seem to say that a lot).  Due to the winds, the port has been closed to all small ship traffic.  There were a couple of freighters hanging outside the harbor waiting for a chance to get into this very busy shipping port. 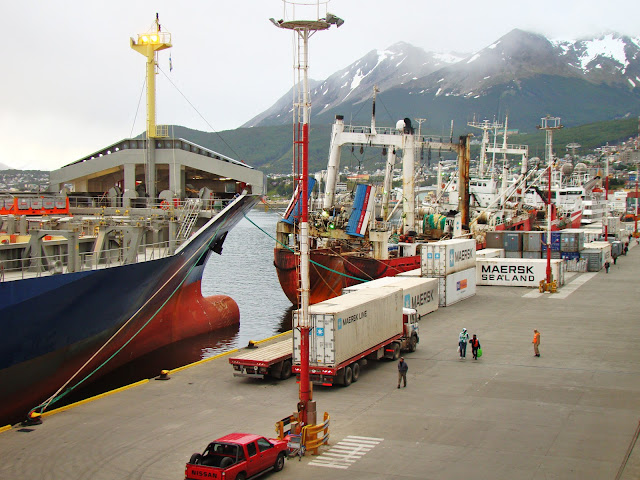 The restaurant was packed.  I kept waiting for the crowds to thin out before I got in the line.  By the time I started through the line about , they had run out of clean plates & silverware.  So, I went to the dessert station first; & got some bread pudding.  They had clam chowder & chili right next to the desserts.  So, I got a small bowl of chili too.  Let me tell ya; that was some spicy chili; made my nose run.  While I waited for clean dishes, I ate dessert next.  I wasn’t bowled over by the entrée choices; but I did have some spaghetti Bolognese, grilled Brussels sprouts & the roasted Mediterranean veggies (again).  Whatever seasoning they put on these veggies is to die for. 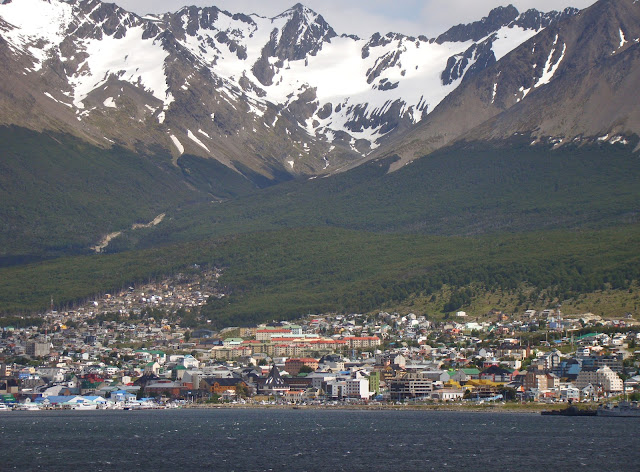 My afternoon tour was a catamaran sail of the little islands in the Beagle Channel.  With the wind chill it was frigid ass cold out there; & it was misting rain.  I didn’t realize that this tour required about ½ mile walk from our ship to the catamaran.  It wasn’t just me; but there were quite a few older people using canes that weren’t happy to find this out.  I was bundled up in coat, boots, gloves, etc; & was actually sweating by the time I got on the ‘Eduardo B’.  The guide spoke good English; but she had such a heavy accent, no one understood a word she was saying. 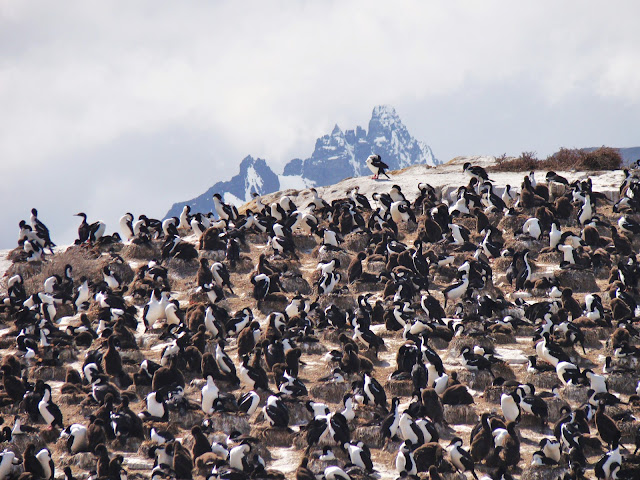 We spent about 1½ hrs. on the water.  When we came up to these little islands, the Capt. would idle the engine & just spin around in circles so that everyone could see the wildlife from all sides of the boat.  One island was covered wall to wall with birds; king/imperial cormorants. 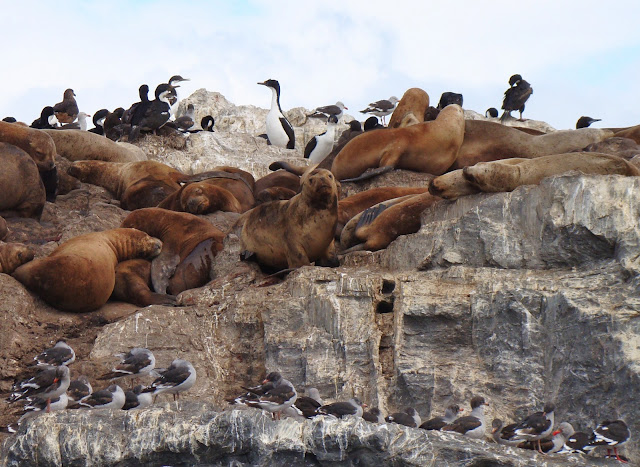 Another island had a lot of seagulls, cormorants & HUMONGOUS sea lions.  There were 2 bull sea lions up there that were as big as a VW Beatle! 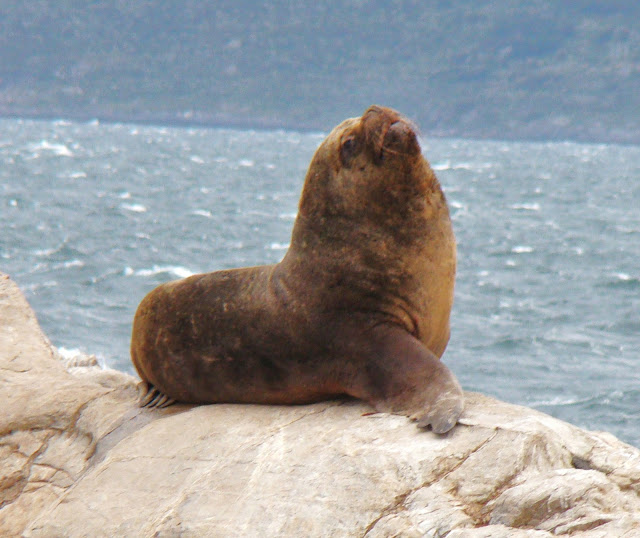 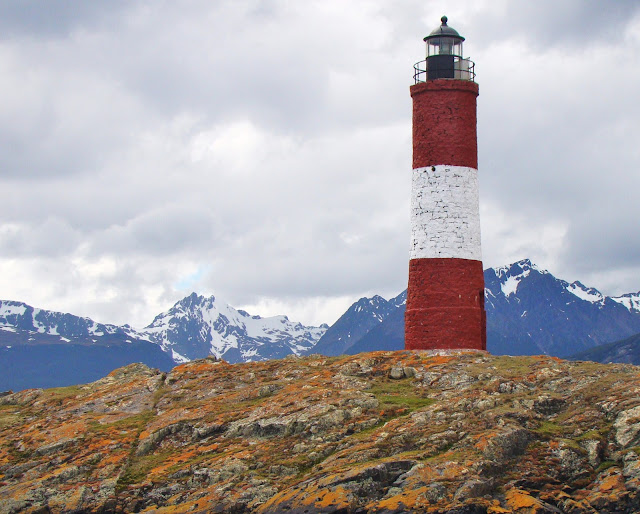 Our turnaround point was the Les Eclaireurs lighthouse.  The winds made the water very choppy; & it was challenging to get up from your seat & go out on deck to shoot pictures without falling overboard.  I can’t tell you how elated we were to see HA had sent a bus to pick us up & take us back to the ship.  It was misting rain again; & it would have made an unpleasant walk. 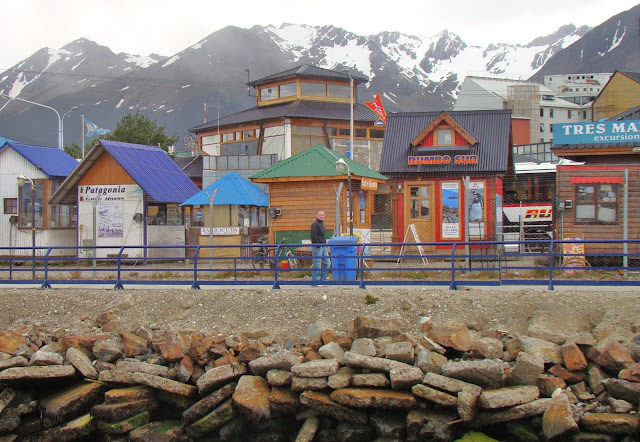 We got an extremely short ride through “town”.  All the business are painted colorfully; & I think it would have been fun to wander around had I really felt like it.  But I didn’t spot a pharmacy close to the dock.  One building that caught my eye was the Museum at the End of the World. 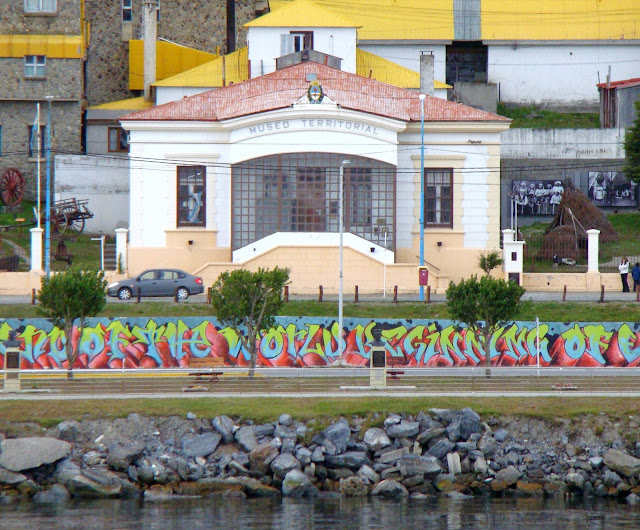 When I came back onboard, it was already ; & I knew the doctor was in the medical center from 5-6.  So, I went up one deck to see about some kind of medicine for my affliction.  The nurse & doc were both American; & we had a jolly old time talking.  Good news is, my chest is clear; but I do have a sinus infection.  He offered me a choice of 2 scrips…..the $63 Z-pack or the $16 Amoxicillin.  Let’s say I’m just as happy taking pills for 10 days & saving the $47 (that can be spent on more internet time, you know). 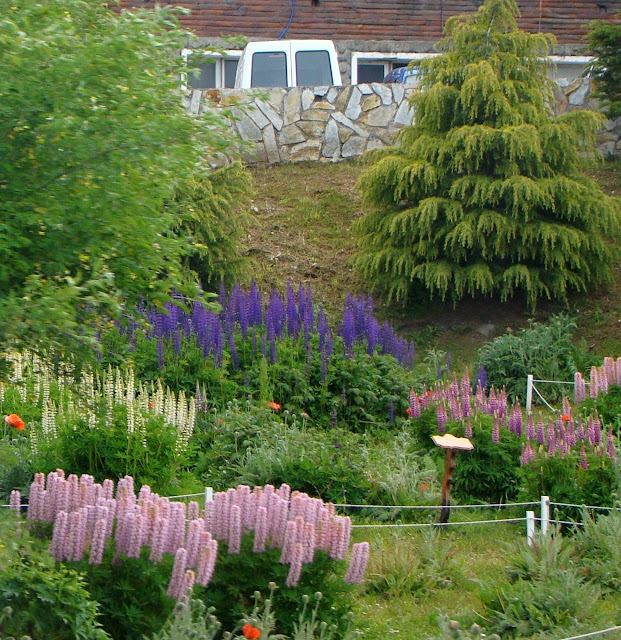 The internet was finally back up, so I got a little ‘business’ done; & then went up to the Lido for dinner about 7:30.  I had a cold appetizer of marinated grilled veggies (red & green peppers, onions, mushrooms, zucchini) topped with shaved asiago cheese & an olive oil & balsamic vinegar reduction (fabulous).  I fixed a mixed salad from the salad bar.  For my entrée I had osso bucco w/ tomato sauce, lemon garlic rice pilaf & some French fries.  I noticed they kept the buffet open way past ; undoubtedly because there were some tours that would arrive late. 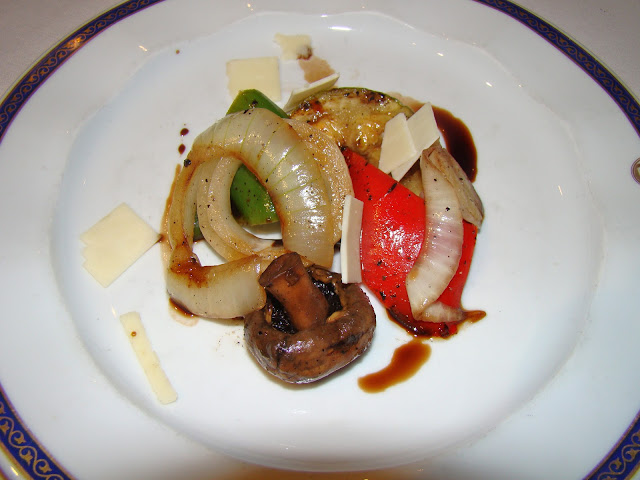 We pulled away from the dock about .  I did a little more computer stuff; & then piled in the bed by .  I’m going to do some reading; take my medicine like a good girl & try to take it easy the next several days. 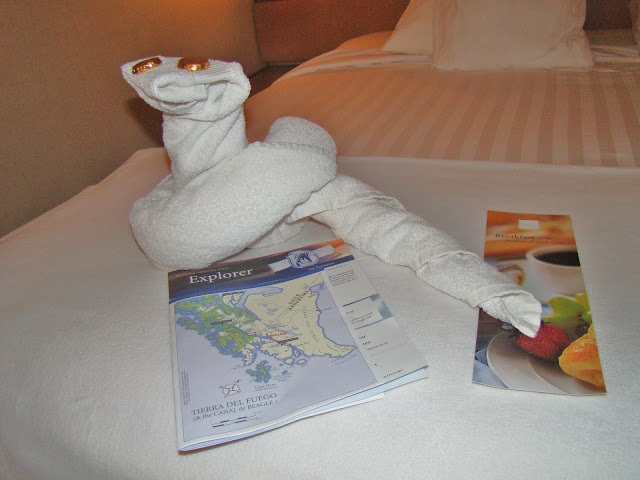 PS:  Sorry there weren't more food photos today; but not much of what I ate looked that photogenic.
Posted by Unknown at 3:57 PM

Becky, love the photos especially the pingus (penguins).
Hope you are feeling better, I'm pleased you are being well looked after by the medical staff.
Philip

enjoying following along ... though a bit belatedly. Your Ushuaia post reminded me of our time in town before our 2007 expedition voyage to Antarctica ... what a great experience that was!