I turned out the light at ; but I think I was too excited to sleep.  I kept the TV on the bridge camera so I would be awakened when it got daylight.   By I was already hearing ship noises that let me know we were docking just as it was starting to get light outside.  I tried to go back to sleep until breakfast was delivered at ; but that wasn’t going to happen either.  I had scrambled eggs, hash browns, toast & a glass of milk.
It was mostly cloudy outside, 47 degrees when I left the ship.  At that time it wasn’t windy; & thank God, it wasn’t going to rain today.  My tour met at in the showroom; & they sent me right down to bus #7 as soon as I checked in.  We had a lovely guide named Dominique, who spoke excellent English.  It was a short 5 min. bus ride from the ship’s pier to the ferry pier.  So basically, I saw nothing of the town .  But what I did see today will stay with me forever. 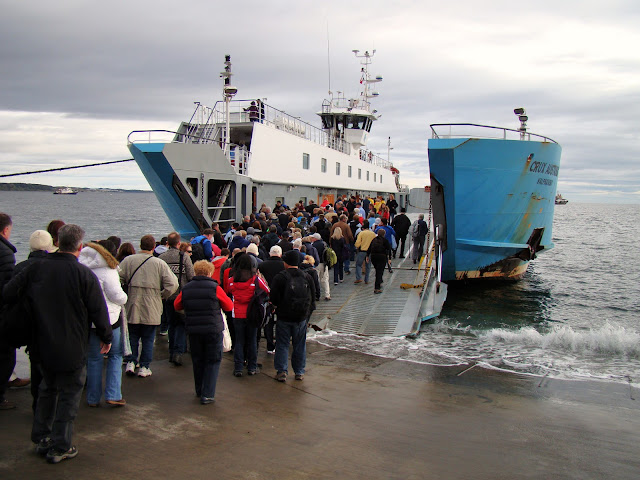 We boarded a car carrying ferry for our nearly 2 hr. trip to , home of the Magdalena Penguin Reserve.  There were several compartments with airline type seats & large picture windows.  We were handed a sack lunch to eat whenever we got hungry.  I sat next to the window, with a lovely lady from sitting across from me.  In a while an extended family came into our compartment; & the dad sat next to me.  He had on so much cologne, I started to sneeze.  I tried to turn my back to him & face the window; but I knew I was going to have to move.  Once we got underway, the dad took a walk outside on deck; & I took that opportunity to move to a different row. 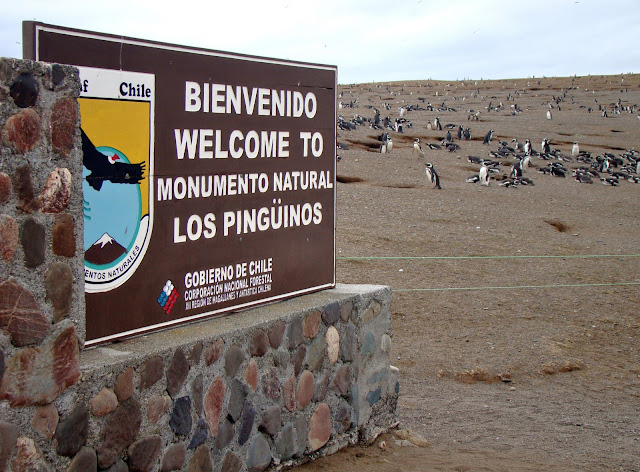 The ferry arrived at a little before .  I had flashes of landing on the beaches of when they lowered the (whatever it is you call it); & we all trooped off onto the dark sand beach.  There were penguins scattered about as far as the eye could see.  Some were around the water’s edge, feeding; some were burrowed in the sand guarding their chicks; some would walk right up to us & peck curiously at shoe laces.  It was very quiet except for a few “barking” penguins & the sounds of seagulls.  There is a sand covered walking path cordoned off that would wind it’s way up to the highest point where there was a lighthouse.  The guide advised walking straight to the lighthouse & take photos on your leisurely walk back to the boat.  Well, very few people followed that advice. 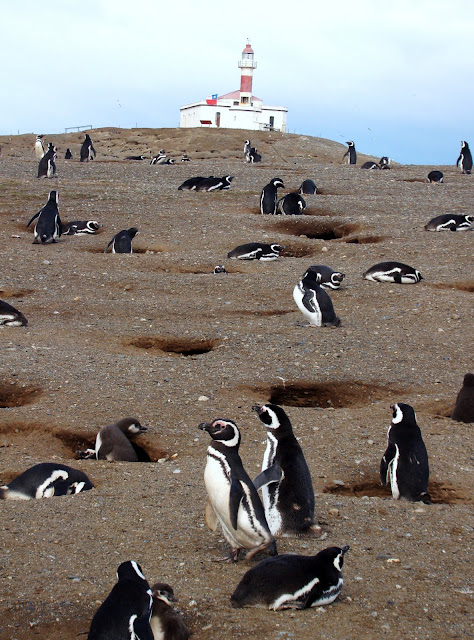 I was mesmerized by these darling creatures; & I was snapping shots every step of the way.  As long as you walked slowly & didn’t make any sudden moves, they seemed just as curious of us as we were of them.  There seemed to be thousands of burrowed holes in the sand.  If you peeked inside, sometimes you could see the chicks with their fuzzy brownish coats. 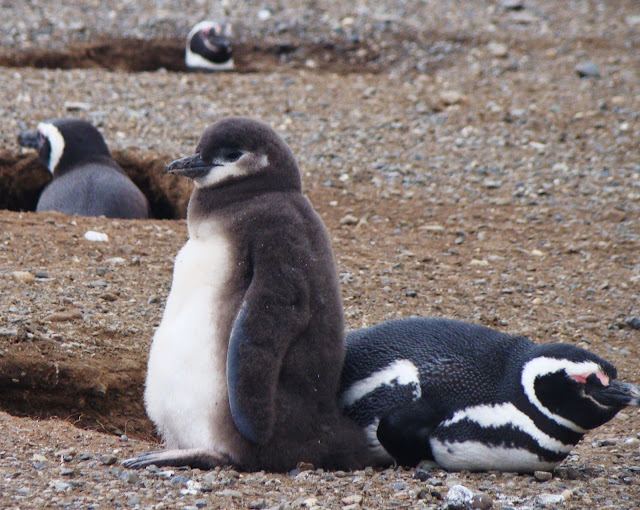 They came in all sizes; but none seemed to be that newly born.  Occasionally, the mother would be in there with them; her head just peeking out of the hole.  I saw ‘couples’ preening each other; saw some (hopefully) play fighting with their beaks.  I even saw some that appeared to be “doing what couples do”, although it’s not that time of year for such amorous adventures. 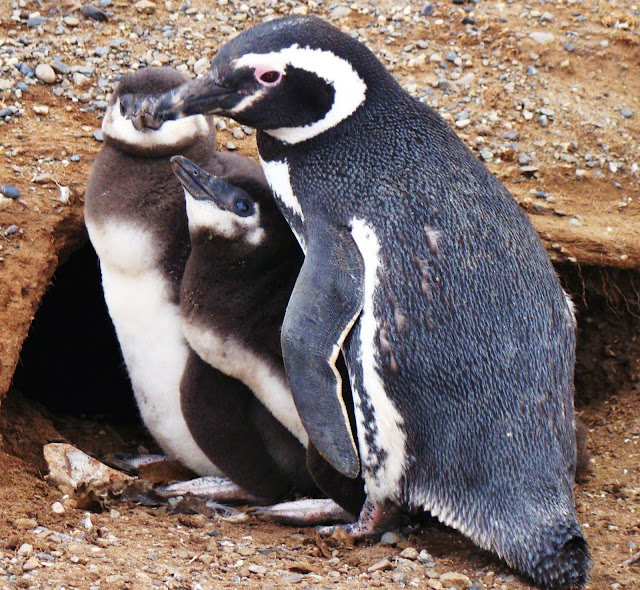 You can tell they are quite used to people because they would march across our walking path right in front of us on their way to the water to feed.  It was eerily quiet at times; & then others, seagulls would be squawking & the occasional penguin would be ‘barking’. 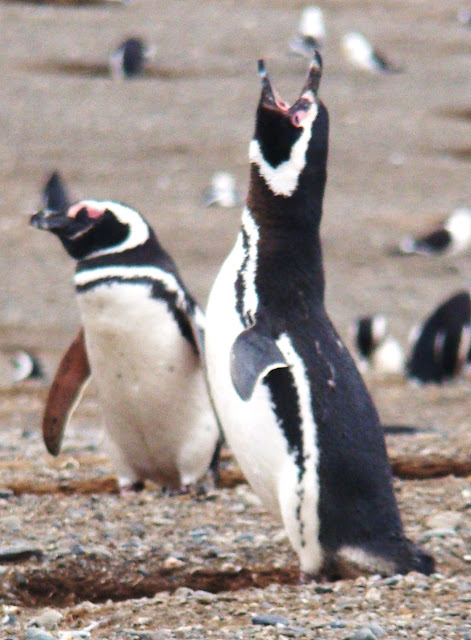 The temps rose to near 60; & the only thing that could have made it more perfect, would be if the sun were shining.  The hour went by so quickly.  I felt the need to actually say goodbye & say a little prayer knowing that only about 1/3 of those precious chicks will survive to adulthood (illness, deformities caused by inbreeding, or destroyed by predators). 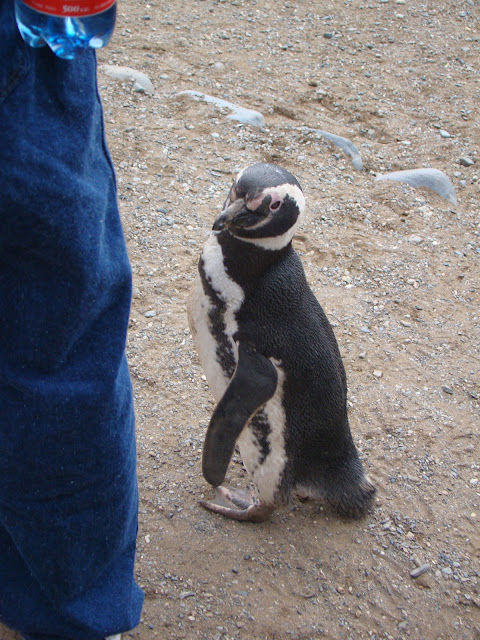 On the ride back to the docks, most of us ate our snack lunch.  There was a half ham & cheese sandwich & a half cheese, tomato & lettuce sandwich (interesting combination, I thought).  There was also a bottle of water, a pouch of peach nectar & a (faux) rice crispy treat type bar.  When we walked off the ferry towards our waiting buses, the wind was blowing so hard it was difficult to walk.  They say things can change like that very quickly down here.  When I got back to my cabin about , I saw on TV the winds had whipped up to . 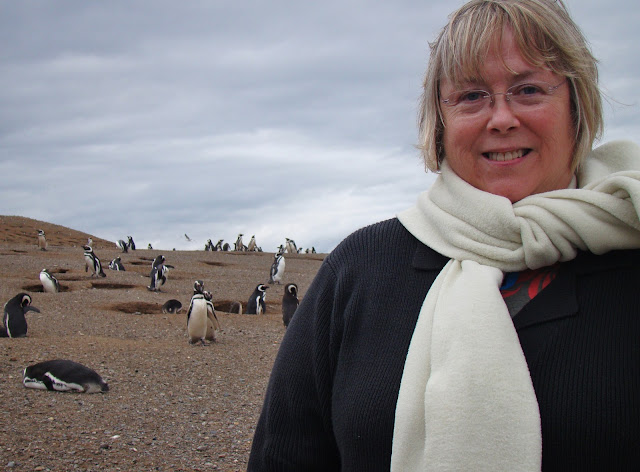 I immediately transferred the approximately 160 penguin photos to the compt.  I know it’s going to take a long time for me to edit & narrow this batch down to a manageable few.  I really felt puny this afternoon; contemplating whether I should see the doctor since this has gone on far long enough.  But I though maybe I’d hit the shops once we set sail to see if I could buy some cold medicine (they don’t sell any…..they’d rather you pay to see the doctor instead).
So I curled up on the couch with the blanket (now that’s the first time that’s come out of the closet) & got on the internet.  With the cabin door open the signal is a little better.  I was able to upload 2 days worth of the blog & check mail before we set sail.  Since the winds had picked up & all Pax were back onboard early, the Capt. decided to sail around  instead of 7 due to the fact that the winds had picked up.  I thought this would give us a bumpy ride; but surprisingly it didn’t. 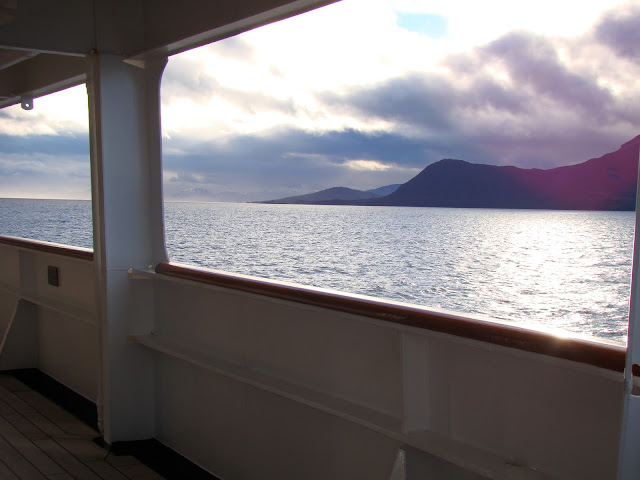 I went up to the for some dinner about .  I don’t know what I was in the mood for; but I didn't really want anything that was on the menu.  I got a small mixed seafood ceviche appetizer & a plate with a couple of chorizo sausages, creamed peas with pearl onions & French fries.  I asked for a piece of the pina colada cake; but what they gave me was definitely not P.C. cake.  I don’t really know what it was cause it had no discernible taste to it.
I stuck my head in the shops looking for cold medicine & took a first look in the photo gallery.  Couldn’t find my embarkation picture; & didn’t like any of the others that they shot of me.  Back in the cabin about .  I tried to get back on the internet; no signal.  Didn’t really feel like doing much of anything; so I got in the bed.  I’ve lost a good bit of sleep the past few days; maybe I’ll feel better in the morning. 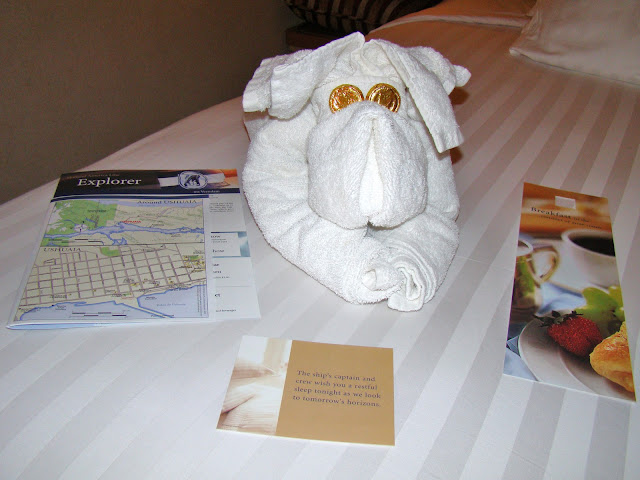 So, there’ll be no interesting food pictures today.  Just penguins; that’s all I’ll remember about anyway.
Posted by Unknown at 4:58 PM