We were scheduled to arrive in P.C. at .  My first thought was……oh, how nice to have a morning to lounge around in bed?  I woke up around 8 to go to the bathroom & happened to turn on the TV.  We were passing some beautiful scenery that was being narrated on the bridge cam channel (& on open decks).  It never dawned on me (& my sinus clogged brain) that we would indeed be sailing through the Chilean fjords this morning.  And better yet, why didn’t HA announce that our journey through would be narrated or print it in the daily “Explorer”? 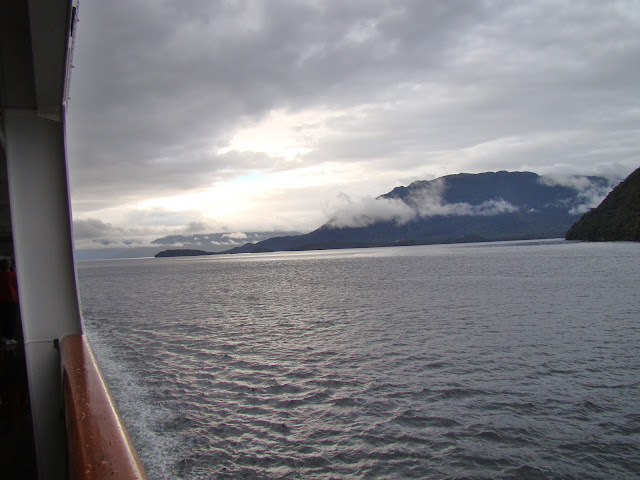 I threw on a pair of jeans, tucked in my nightgown, covered up with a coat, grabbed the camera; & headed out (my “secret” escape hatch) to the promenade deck.  And I said a quick prayer that I wouldn’t run into anybody I knew (thankfully, I didn’t).  Temps were in the mid to upper 50’s; but the wind off that water was very nippy.  I snapped a few photos as we wended our way between tiny islands (& some not so tiny) heading up the Aisen Fjord.  I was experiencing a dejavu moment from 2 yrs ago……this looked so much like the fjords of .  And reminiscent of sailing into 4 yrs ago.  The narrator said that the water depth varied drastically every few feet.  One minute, the bottom would be below our keel; the next .  That’s why the Captain allows a local pilot to steer the ship at this time.  No one could know the local waters better. 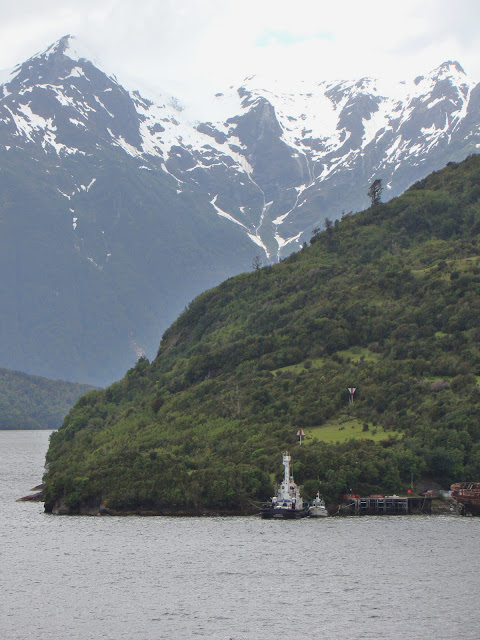 The narrator also pointed out that these particular fjords are heavily forested, unlike the one’s we’ll see further south the next several days.  Even though it’s grey & drizzly outside, you can see how intensely green the vegetation is.  There’s just the tiniest bit of snow on the tops of the taller mountains.  We are now at the most southern end of the .
I only saw 1 tiny waterfall (while I was outside).  That’s something else that should change the further south we go.  The ice fields have already thawed this far north; whereas, the further south we go, the colder it gets (I think you’ve got the idea).  After about 15 mins., my fingers started to freeze, so I went back inside.  I left the TV on; the narrator’s voice was very soft & mellow (like a smooth jazz station disc jockey).  I figured I could fall back to sleep if I got tired of watching.  That did eventually happen (not sure what time); I kept waking up every time they made an announcement about tender tickets.  The next time I looked it was . 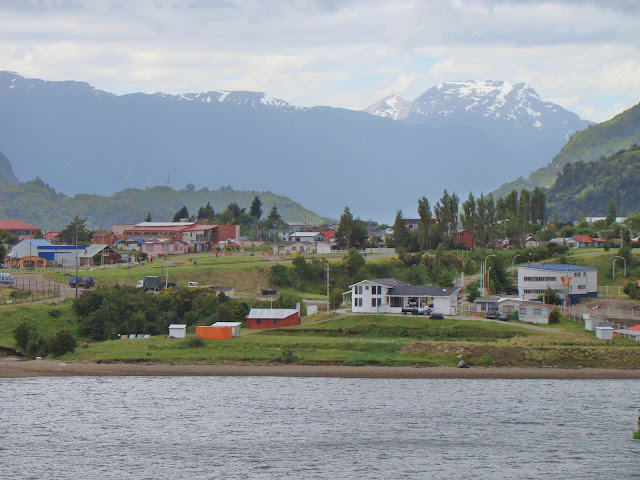 We were at anchor off Chacabuco, which is a small industrial & ferry port for the region.  There is nothing right here.  Everyone who is going ashore will be bused further up the narrow river to the town of & points beyond.  There were no tours that excited me in the least; therefore I treated today as a sea day.  But for those who wished, they could have gone on nature hikes, horseback riding, kayaking, a photo safari or visited a ranch.
I dressed, plopped on the wig & headed up to the restaurant for “brunch”.  Not very many people onboard at that time.  I started with a few pieces of sushi, asparagus wrapped in smoked ham & a half cup of steak house soup (despite the name, it was mostly broth).  From the oriental station, I got a little fried rice topped with spicy sesame beef.  I applaud HA on how they “tag” spicy foods.  On a scale of 1-10, I can handle spicy in the 5-6 range.  When HA uses the term “spicy”, it falls into that perfect range for me. 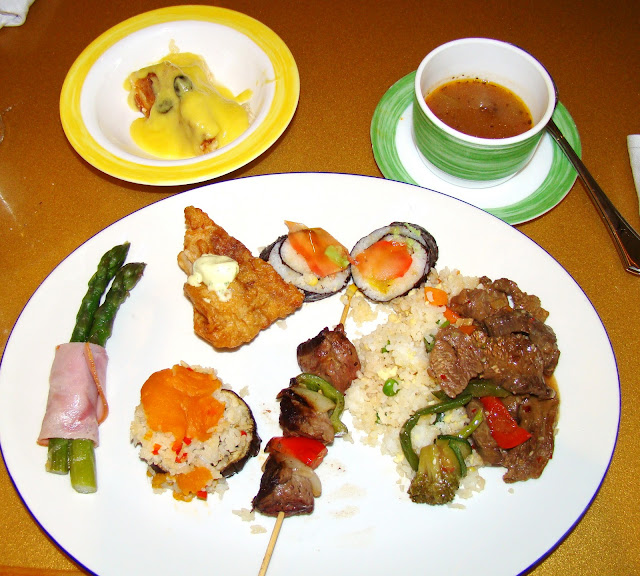 I tried a small piece of their fish (minus the chips).  I think it was cod; & it was moist on the inside, crispy from the flavorful batter on the outside (despite the fact that it sat for a short while under a heat lamp).  I tried a lamb kebob (quite good).  The one bust was the vegetable side called “golden rice cake on grilled eggplant”.  The ‘golden rice cake’ part appeared to be a dabble of pureed sweet potato on top of some white rice on top of a slice of grilled eggplant.  To me the flavors didn’t work well together, although the grilled eggplant had a good flavor.  For dessert I had some of their (world famous) bread pudding with vanilla sauce.  Excellent! 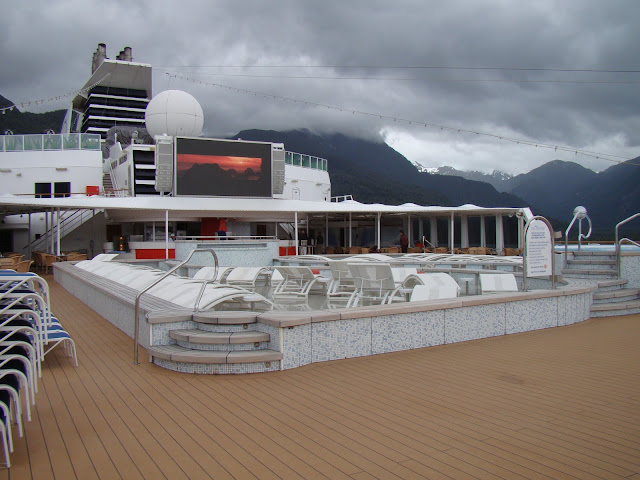 I stepped outside aft to the area called the Retreat to take in some more of that clean, crisp air.  First time I’d even walked back there; & had not realized that they had installed a huge LCD screen for showing movies under the stars high above the bar during the last refit.  I stopped by the alternative dining desk to make a reservation for lunch at the Pinnacle Grill for tomorrow (Christmas Eve).  The wonderful folks at AAA presented me with a complimentary dinner voucher; & that seemed like a festive time to redeem it.
I went right to “work” in the cabin.  We never saw sun today; just intermittent light rain showers that kept hitting the bridge camera.  I’m going to have to search further for a public area with a strong wifi signal that has electrical outlets I can tap into.  So, far I haven’t been able to find a compatible 9 cell lithium battery for my baby Acer.  I can adjust my performance settings for either high performance or long battery life (not both).
I got a little chilly; so piled back under the covers about & watched the sailaway on TV while I continued to work on photos.  At I went up to the for dinner.  It was still very grey, moderate rain & some low hanging clouds shrouding the fjords.  For dinner I chose a mixed salad, a taste of their cole slaw (excellent) & a dab of the vegetable pasta salad. 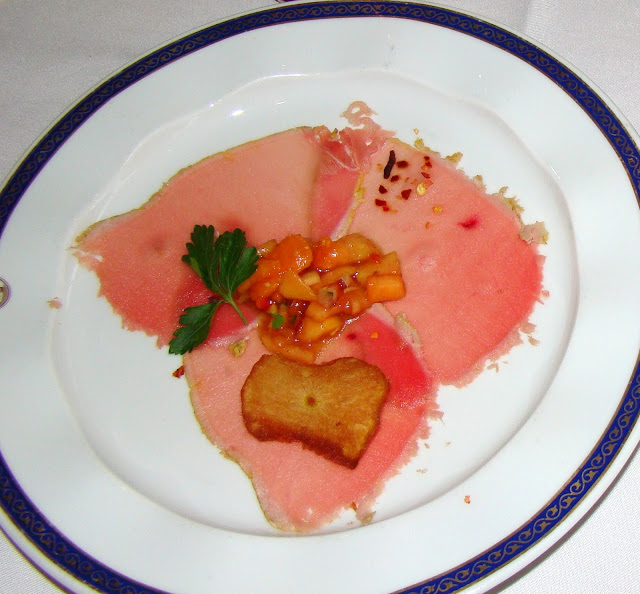 They had a gorgeous looking appetizer of seared ahi tuna carpaccio fanned out on a plate with a papaya salsa.  It was okay; but not as good as it looked.  I wasn’t that excited about any of the entrees tonight; but I settled on the parmesan coated veal loin cutlets.  They were very tasty; but would have benefited from some light sauce on the side.  And the only veggie that had any appeal to me was southwestern stir fried veggies with cilantro & chili butter (very tasty). 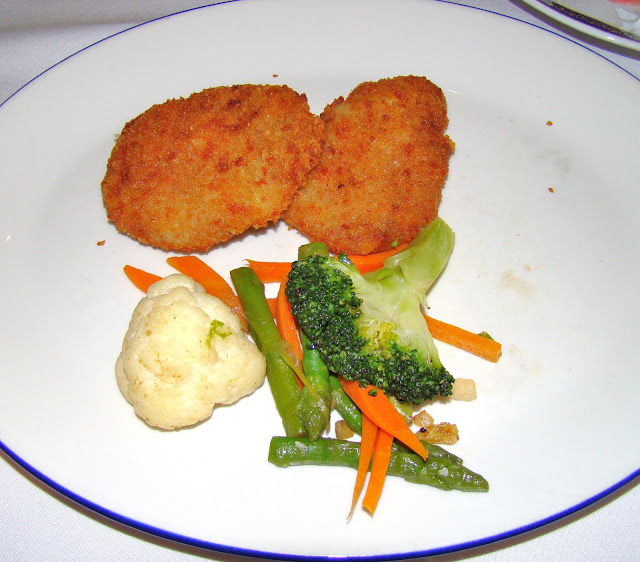 When I got up to get my dessert (a cheese plate), I saw Ken & Shirley at another table; & they motioned me over.  Ken & Shirley are from NC; & I had struck up a conversation with them the first evening while we were waiting to see the internet mgr.  Although I didn’t mention it back then, they encountered what appeared to be bed bugs in their cabin upon embarkation.  She found them when she lifted up the pillows.  Housekeeping tried to tell them that it was dirt that sometimes falls from the A/C vents; but Shirley asked how could it fall “under” the pillows.  There was no empty cabin to move them to; no extra mattresses to swap out.  They’ve been trying to resolve this issue with Guest Relations for 3 days.  So far, they’ve been offered a bottle of wine & a box of chocolates (which they declined).  But they’re trying to keep their sense of humor about all this.
They also told of an incident that happened to their traveling companions.  They were trying to unstick their sliding glass doors to the outside deck, when the whole panel & frame pulled away & fell on him.  It has since been fixed; but this adds to the list of many things that appear to be in the state of disrepair around the Veendam.  True, the ship took a severe battering during the lat sailing ( swells & 100+ mph winds).  But some of my C.C. friends have reported drawers that won’t stay closed, coffee table levers (that adjust the table height) that are broken, glass shelves in the bathroom that are about to fall out of the brackets.  One person even told about getting on the elevator & putting their hands on the railing; & it fell off the wall (the screws were loose).  All this makes me wonder if HA isn’t willing to sink more money in her, will she be under the HAL banner much longer??? 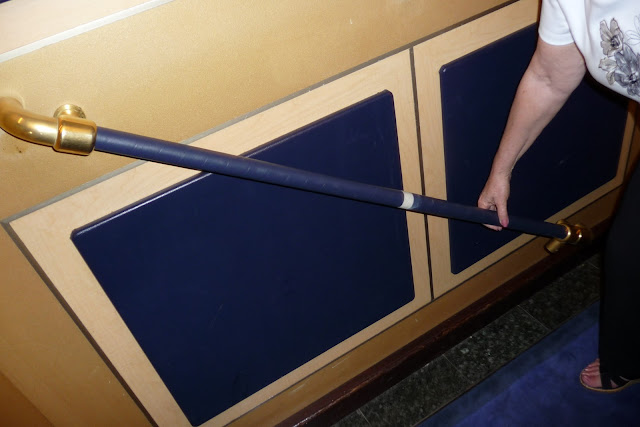 After Ken & Shirley left, I asked one of the stewards if there was any electrical outlet in the .  He showed me one, single, solitary plug about halfway down the wall.  I was so excited to find out about this; it was like Christmas!  I finally had a place to set up my “office” out amongst the masses.  It’s not far from a signal repeater; close to a bathroom, outside deck & food!  I was finally able to get on the internet; & sat there for several hrs until it got too dark to see outside.  About , the show must have let out because people started spilling in.  And soon, they opened the buffet for the late night snackers.
Lee Ann & Bill came in for ice cream; & she told me all about their private tour today.  They had a wonderful time; & like Ken & Shirley were saying they saw the most gorgeous scenery & had sunny weather once they got away from the port area.  Who knew?  Ken’s promised to share his photos with me; so I can share them with you.  They said the flowers; waterfalls & mountains were gorgeous.  Yes, I now have regrets about not taking their tour.
About the ship started rocking a bit.  The captain had made an announcement earlier about things getting rough in the night tonight.  Once we sail out of the protected fjords & canals & get back into the Pacific, the winds will be a big factor.  So, he said be prepared between . It’s now ; & I’m back in my cabin.  Things are starting to rattle & shake.  I think I’m gonna like tonight! 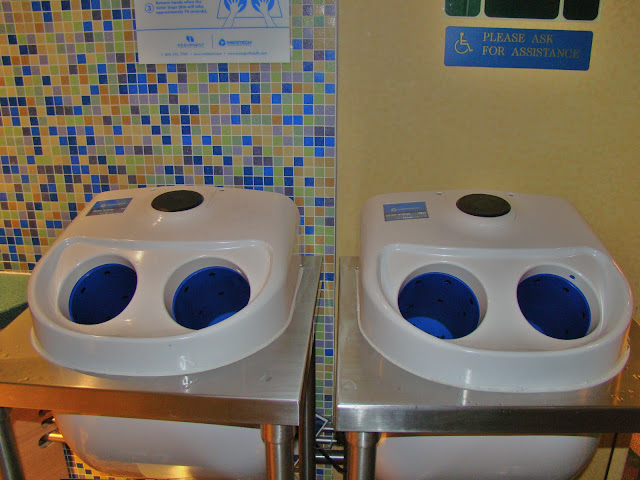 Thought I'd throw in a photo of those fancy new hand washing machines.

Ken & Shirley have allowed me to use some of their photos from Puerto Chacabuco.  They did a zip line tour, visited the Simpson River National Reserve & a local farm in the neighboring town of (no, I don’t know how it’s pronounced).  At least you & I can see how beautiful the region can be when the sun shines. 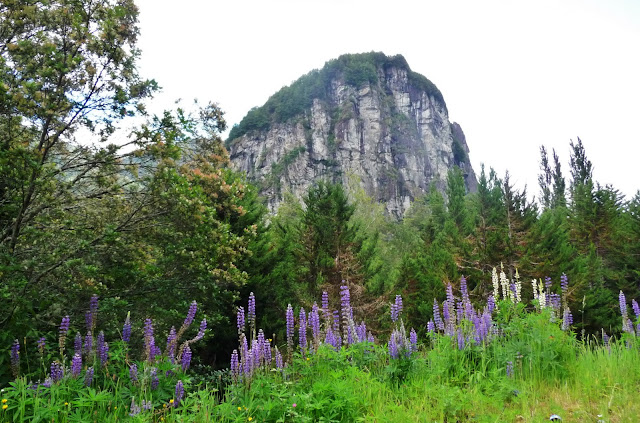 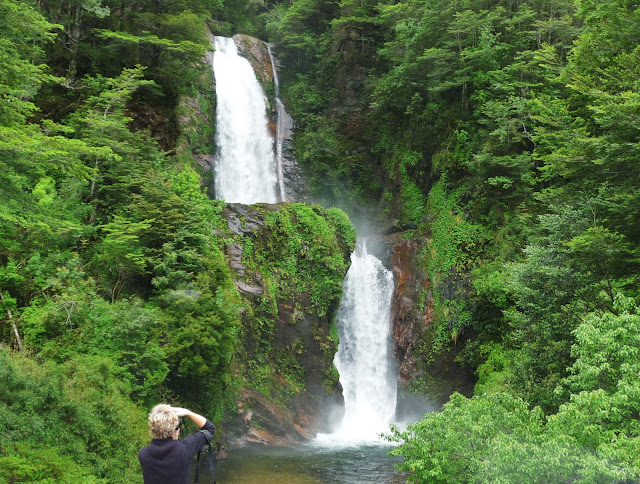 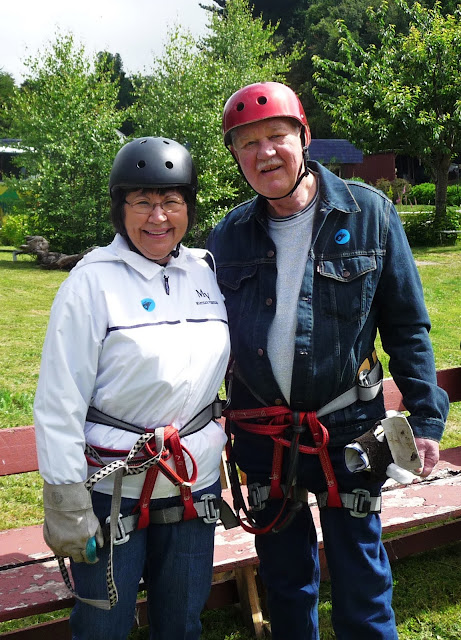