Morning came pretty early today. I set the alarm for 7:15; & had ordered breakfast in the cabin to be delivered between 7:30-8 am. When 8:00 came & went; & I had no breakfast, I was getting worried I called room service; but no one answered. Maybe everybody wanted breakfast en suite this morning. I was writing a note to leave on the door, when they finally arrived at 8:20. No apology, no excuses. 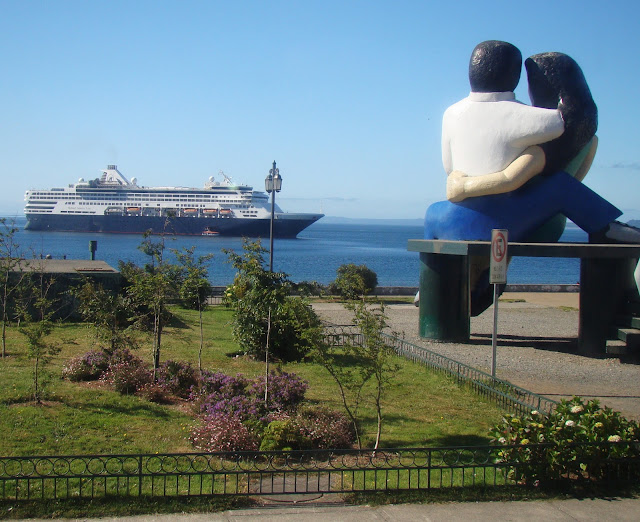 I had 2 eggs over easy, a bagel with cream cheese, V8 juice & some hot chocolate very quickly. My tour group met in the showroom at 8:45. The weather was beautiful; & warmer than they had predicted (low 70’s). I wore jeans & a tee shirt; & wish I had worn capri pants instead. We anchored offshore; & used the ship’s lifeboats to tender in. We landed at a small free standing concrete slab that was connected to land by a VERY steep incline of a metal grating-type walkway. Very strange!

Today’s tour included a drive through Puerto Montt, & short stops in the towns of Puerto Varas & Frutillar in the Lake District. Susana was my guide on bus #21. She was a delightful young woman, who provided lots of information, so much so that there was not one moment of silence. 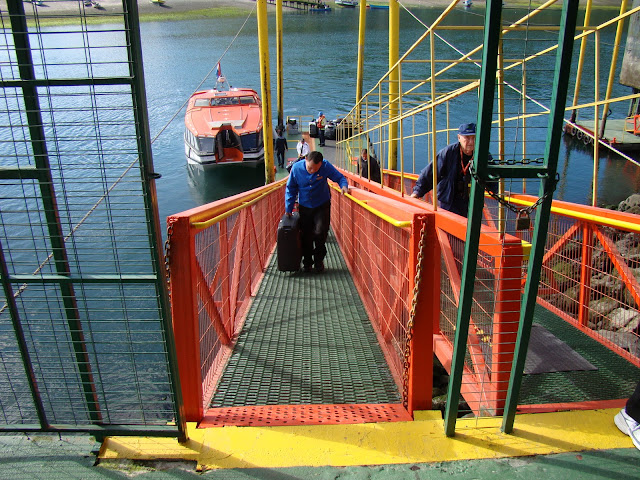 From the pier we drove the length of the main street (Diego Portales) that hugs the waterfront. There are colorful & bustling shopping areas & the occasional park/green area. We passed their (quite large) mall. Susana explains that with the long hours of darkness & constant rain during their wintertime (during our summers), everyone hangs out at the mall. She also pointed out that during these rains, the winds are so high that umbrellas are useless. You come home, clothing drenched; & everyone lives in their kitchen where the only heat source (wood stove) can be found.

The modest houses are made of wood in a wide array of colors. And even though they are prone to earthquakes in this area, most of the houses have come out unscathed for a hundred years. As the bus climbed higher up in the hills, we made a quick photo stop at the Mirador for views of the city below. 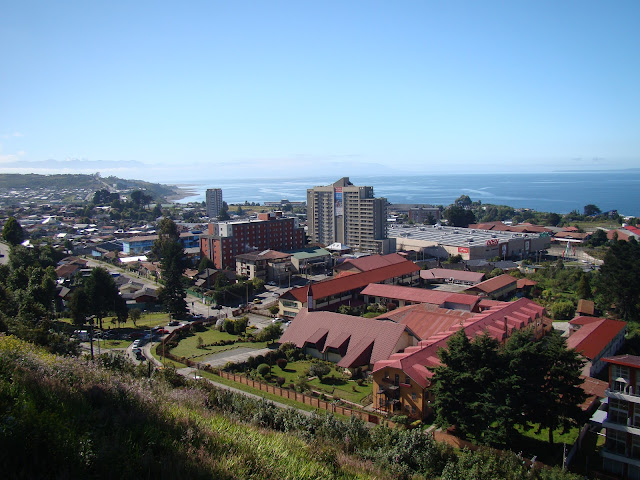 We drove through beautiful farm land with horses & cows. This area produces 90% of all the milk & dairy for Chile. Occasionally you would see a small country store or church, 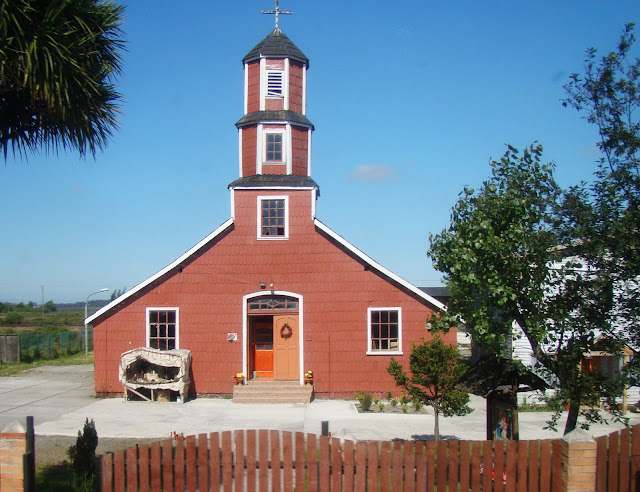 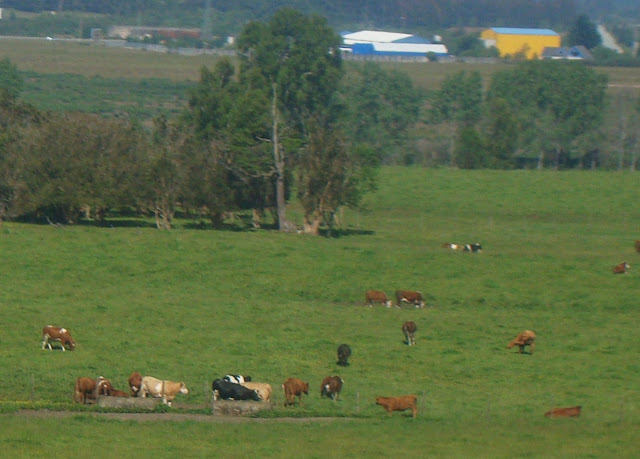 Our next stop was 13 miles outside of Puerto Montt, in Puerto Varas on the shores of Lake Llanquihue (pronounced jan-kee-way) (Chile’s 2nd largest lake). They call this lovely little town the ‘city of roses’. They’re everywhere; & Susana says you don’t have to tend to them at all. We had only 30 mins to walk about a bit. 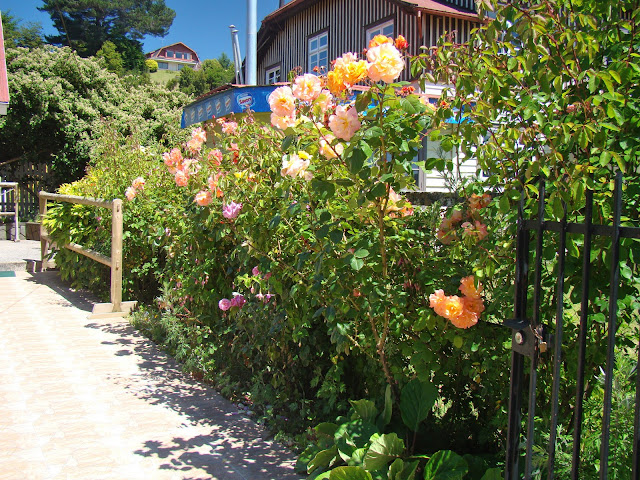 She pointed out the Christmas market tent, the pharmacy, the grocery store, the casino & the city park benches if you just wanted to sit & soak it all in. I walked first toward the lake for the magnificent views of the Osorno volcano (the pointy one) & Calbuco volcano (the one with the crater top). 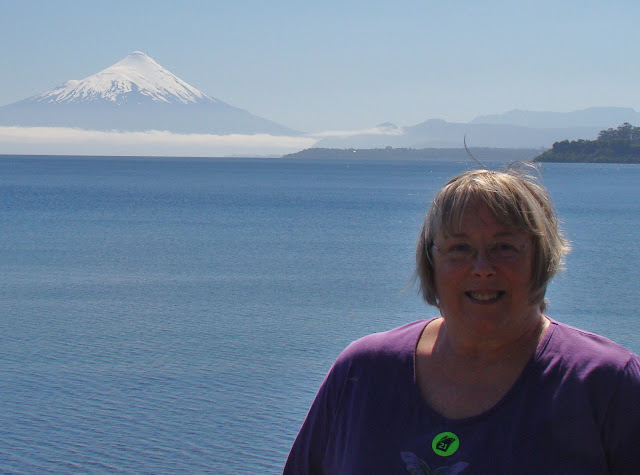 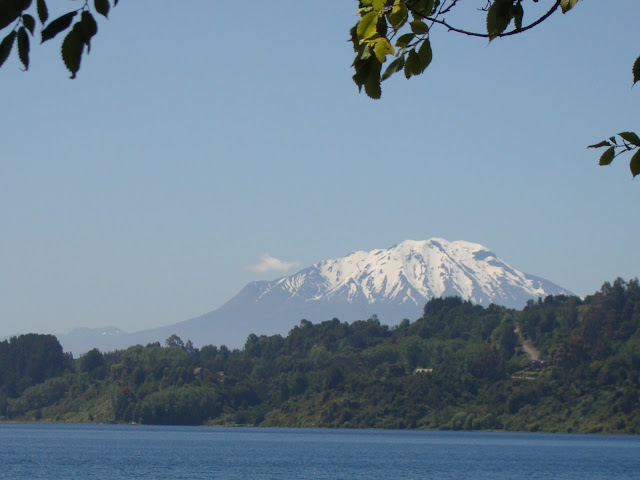 The mild temps & warm sunshine were almost therapeutic. I wanted to just sit & stare & sniff the aromas drifting out of the cafes & hotel restaurants. On the way back to the bus, I decided to stop in a pharmacy & pick up 2 huge bottles of water (at half the price of what they’re selling it for on the ship). 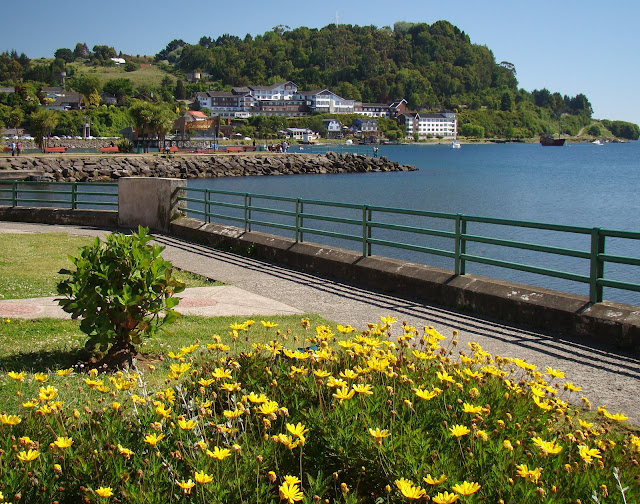 Then it was back on the bus to drive 19 miles further to the little “Bavarian-style” town of Frutillar (pronounced frew-tee-yar). There’s a lot of German heritage here; therefore the architecture is reminiscent of the Black Forest area; & our tour included tickets to the German heritage museum. We only had 45 mins of free time; & I preferred to walk & shoot the sights instead of visiting the museum (no disrespect to the Germans). 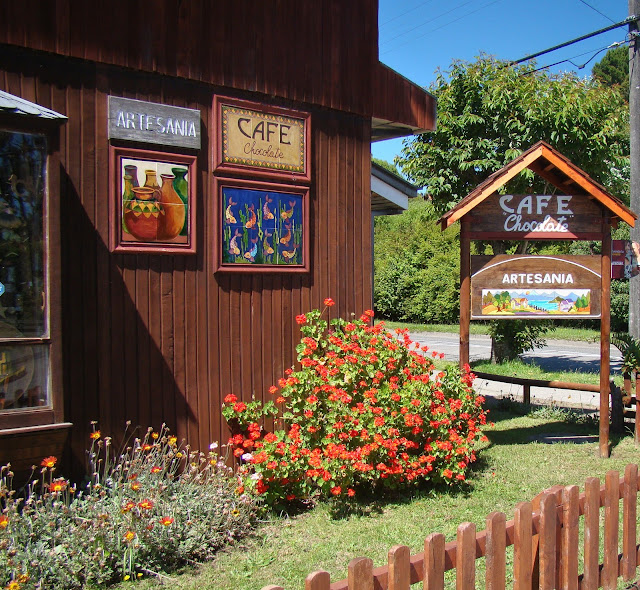 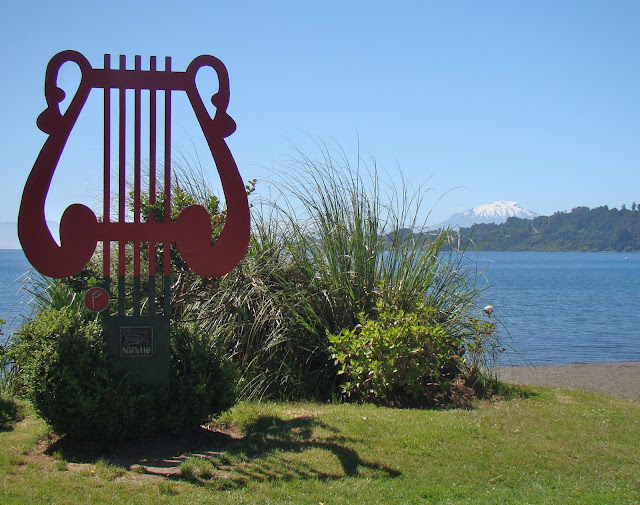 Along the lakefront was a beach of volcanic looking sand. There were a few families lounging around on the beach, just as we would back in FL on a warm summer day. But I shudder to think how cold that water must have been. There was one brave (or would that be crazy) man swimming in it. 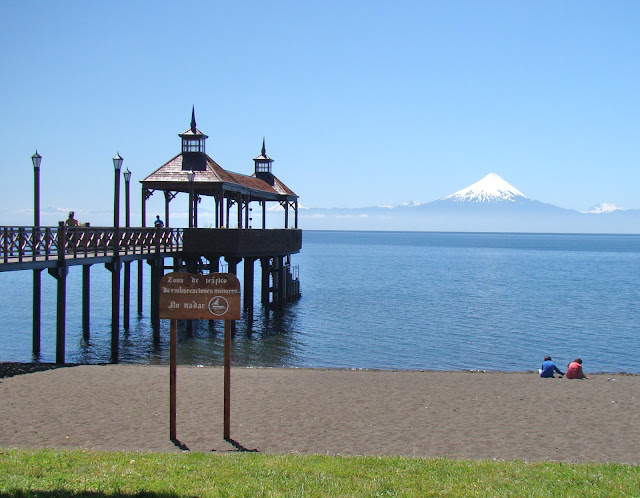 There were roses, salvia, poppies, daisies, calla lilies everywhere. There is a big music festival (that just ended) here every year; & there were musical influenced sculptures, a long wooden pier & gazebo on the waterfront. Everything to make a beautiful photograph with those snow capped volcanoes as a backdrop. This would be the perfect place to escape the hot summers, except that would be during their harsh winter time. 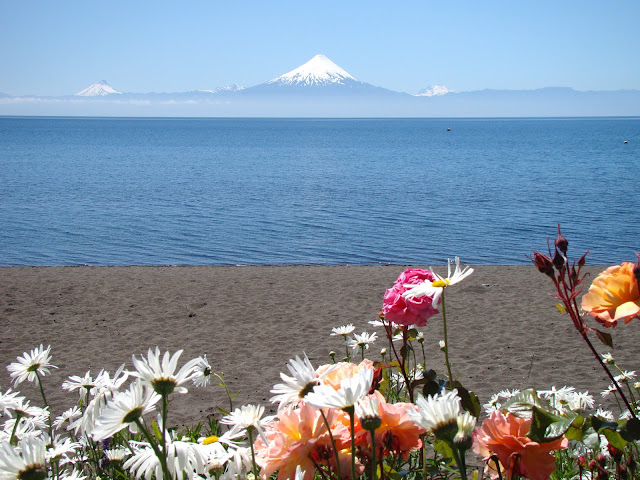 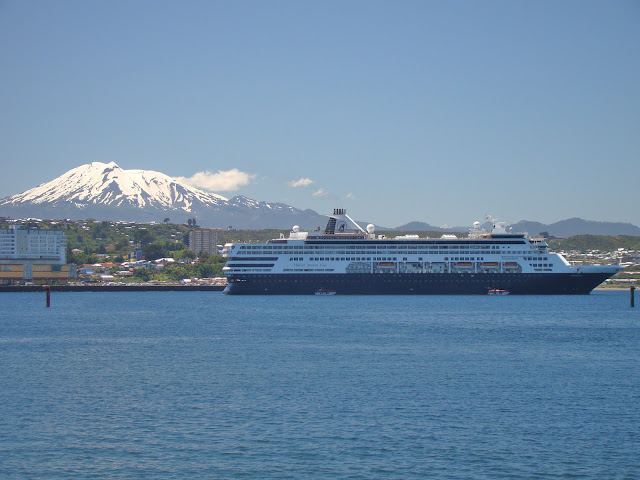 We got back to the ship at 1:20; & I headed straight to the Lido for lunch. I tried a mis-matched taste of everything on the menu; some spaghetti Bolognese (just okay), some rare prime rib (no horseradish in sight so I used the wasabi from the sushi station), some fried rice with Peking duck stir fry on top. I got a taste of the potato salad with sun dried tomatoes (very good), corn salad, mixed salad & a couple of pieces of shushi. Just after I started eating, I saw Lee Ann & (her husband) Bill coming in; & I motioned them to come over & sit. I really enjoyed chatting with them; talking about their extensive travels & her celebrating her 1-year “cancer-versity”. She’s a fascinating character & a very active advocate for breast cancer awareness. Time flew by. I got a plate with some cantaloupe, sliced pears & lots of brie to bring back to the cabin for a late afternoon snack. 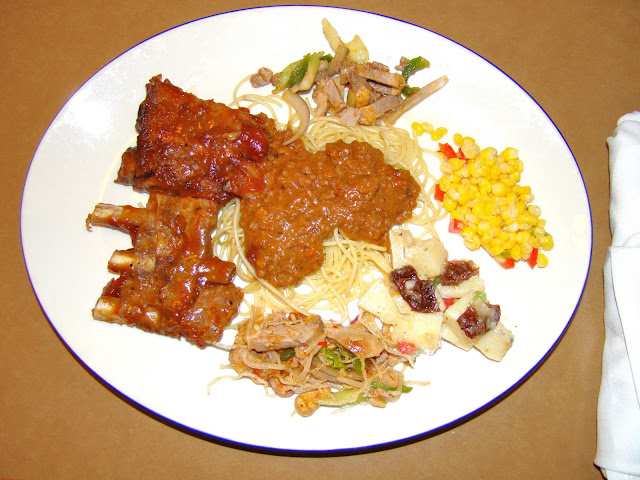 I did a little photo editing (trying not to get too far behind); & took a short nap. I woke feeling even more stuffy & head-achy. We set sail at 5 pm; & I knew right away that I was going to bring my dinner tray down from the Lido. Whatever this affliction is…..I want it gone! 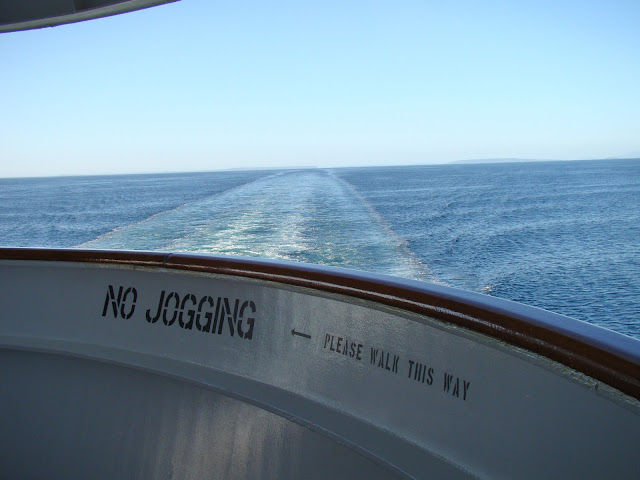 Just before they closed at 8, I went up to the Lido & got a few BBQ ribs & a couple pieces of sushi to bring down. That & my cheese & fruit was all I really felt like eating. I had the DND sign on the door; but when I heard the cabin steward across the hall, I stuck my head out & asked if they’d refill my ice bucket. I made myself comfy on the couch & watched a little basketball on TV while on the internet. Not sure if it’s the mountains or if we’re sailing between the fjords, but I lost the internet connection 8 times during the evening. But I was able to upload yesterday’s blog entry before I gave up on the internet entirely. Then I edited photos until I was nearly comatose. 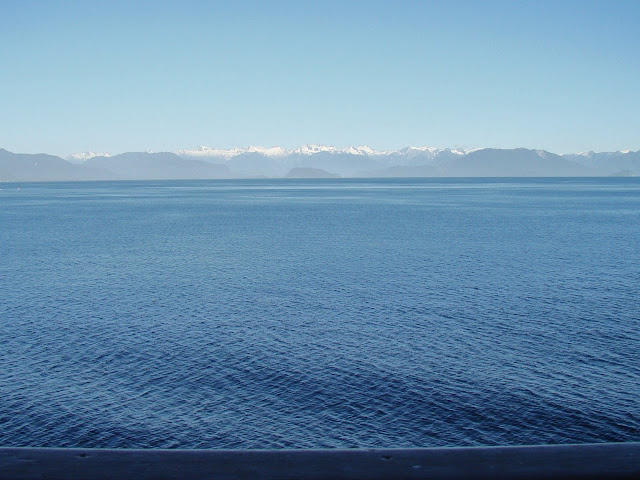 Since we’re sailing in a kind of inland waterway, there is no motion on the ship tonight. Bummer! It was a fabulous day. Finally to bed about 1 am.
Posted by Unknown at 3:19 PM