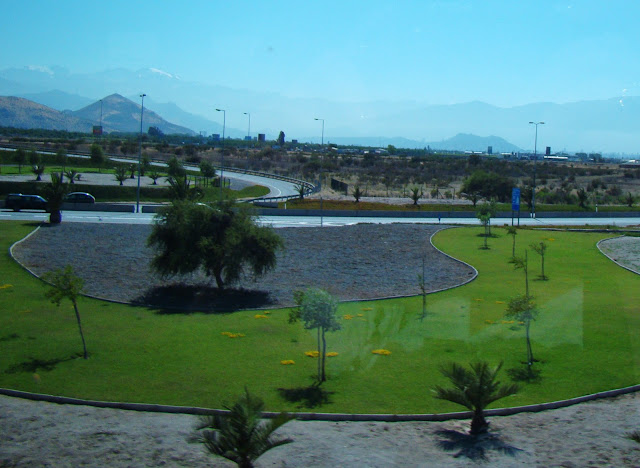 It took about 15 mins. to get into (what appeared to be) the “city”.  Lots of high rise condos, each w/gorgeous plants & trees spilling out over each balcony.  We arrived at the Santiago Marriott about 11.  The lobby was slightly chaotic w/ HA people coming in & (post cruise) Celebrity people checking in at our respective hospitality desks in the atrium.  Some of the rooms were ready at this time; mine was not.  So, I parked myself under the glass roofed atrium & used the free wifi for about 1½ hrs.  There’s a gorgeous Christmas display; flowers everywhere; very festive.  And all the hotel staff I came in contact with have been extremely nice & helpful. 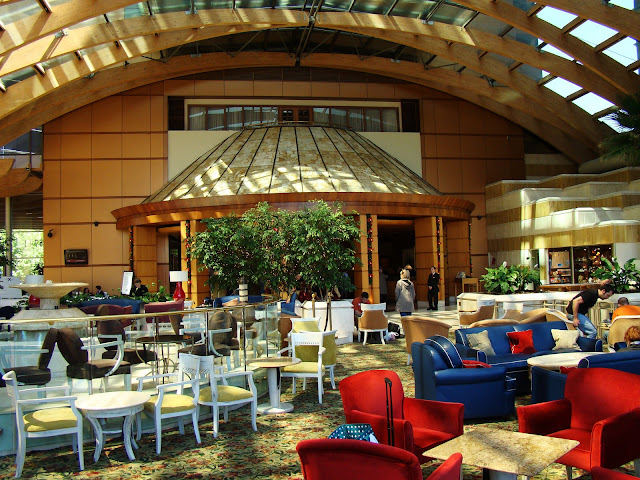 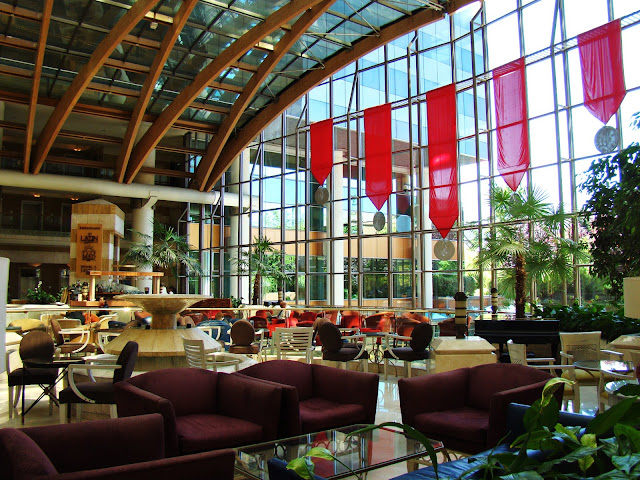 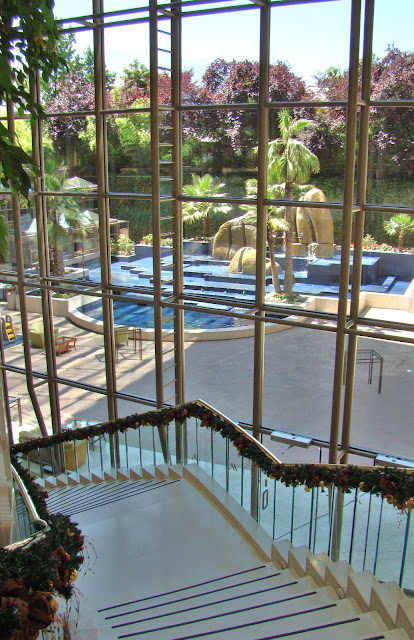 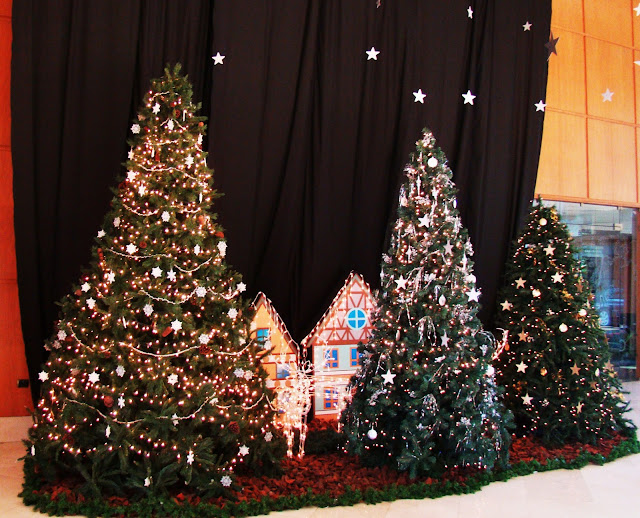 My room was ready about ; & boy was I surprised when I opened the door.  It’s a huge (775 sqft) business suite.  The main living area has a king bed, sofa, coffee table, 2 side chairs, 2 end tables, a cabinet w/ hidden beverage amenities & a large flat panel TV. 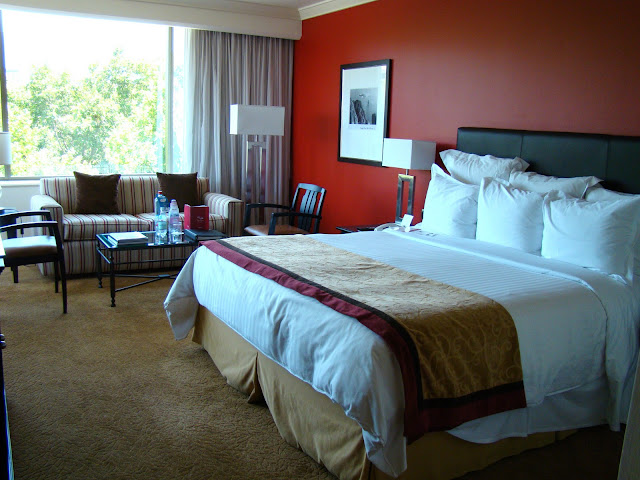 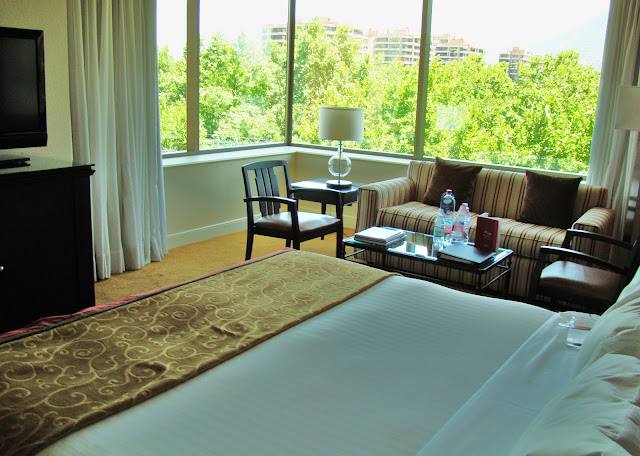 In the adjoining room is a “conference room/office”.  It has a large oval glass top table w/ rolling leather chairs, a wall of cabinetry w/ desk top & another large flat panel TV mounted on the wall.  I could live in here for weeks.  It’s a corner room w/ 2 walls of windows overlooking the street (ho hum) & a slight view of the . 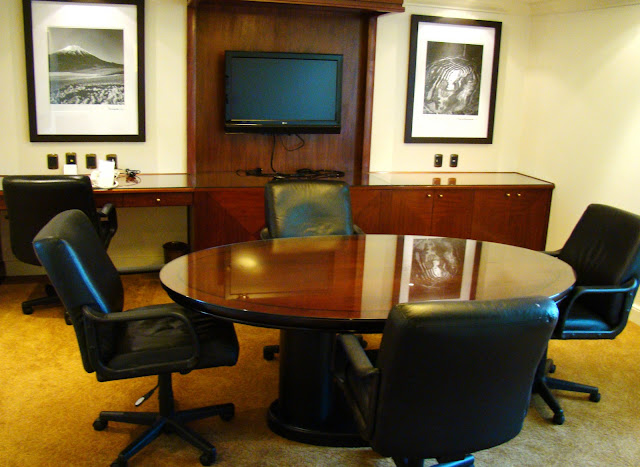 I did a little shuffling of stuff between the 2 big suitcases; & then laid down for a short nap.  This short nap turned into 3 hrs; I was exhausted for several nights of very little sleep.  The fact that is 2 hrs. AHEAD of FL, caught me by surprise.  I was expecting the same time zone (or at worse 1 hr. behind, not ahead).  The sun started to set about ; & it was beautiful outside.  I just wasn’t up to dressing; & going down to the restaurant for dinner.  So, I edited photos on the computer; & then ordered an awesome burger from room service. 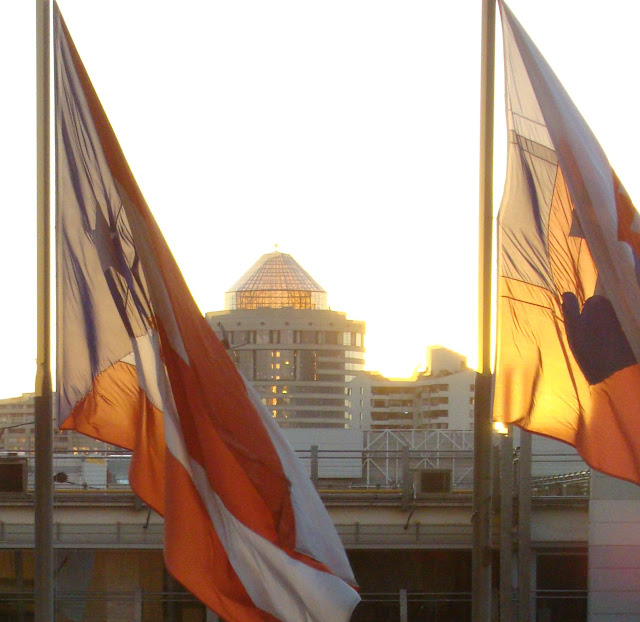 A view from my window at sunset 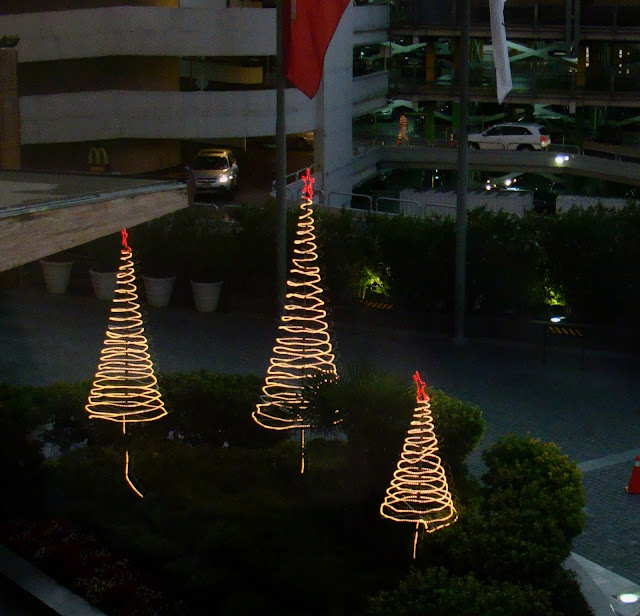 Christmas decorations at the lobby entrance
When I checked the cruise critic message boards about , I read that our ship (the Veendam) would be arriving late in the morning; & that our transfer times had been pushed back by 2 hrs.  I was assigned the bus for the 2 hr. drive to .  If this is so, I wish someone would let me know.  I guess they’re assuming that everyone would automatically go down to the hospitality desk in the lobby & check a bulletin board for any possible discrepancies.  I, on the other hand, think it would be a common courtesy to tell those who have already checked in about any change in plans.  (Would this be standard procedure on my other “favorite” cruise line???)
I’m hoping to confirm or deny before going to sleep.  I really don’t want to set that alarm for !
Posted by Unknown at 10:17 PM

I gained 2 pounds before you even got off the plane!!