I just did not want to get up this morning.  I turned on the TV so I could hear what Capt. Glenn had to say.  It appears that I slept through a short snowstorm already this morning.  He expects the temps to be in the mid 30’s the rest of the day with off & on snow showers.  His thought for the day.....”What’s right may not be popular; & what’s popular may not be right.” I had noticed in the Reflections last night that today’s sunrise is over one hour earlier than it was in Dutch Harbor.  We’re still in the same time zone. Funny what a difference moving 600 miles to the northeast makes. 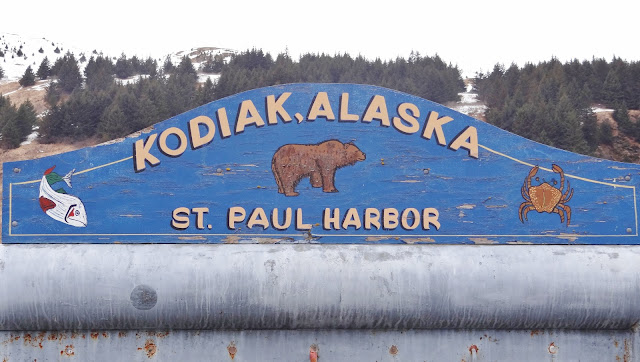 I was drifting off to sleep again, when the phone rang at 9:45.  Celeste wanted to know if I was ready to go ashore (we’re tendering here).  I told her I might see her in town; but I was dragging today.  I took the 11 am tender.  A nice local gentleman was on the pier handing out maps, & making suggestions of things we might want to see.  There were several tours offered; but most everything I was interested in could be reached on foot. The town’s streets are ‘hilly’; but manageable with frequent stops. 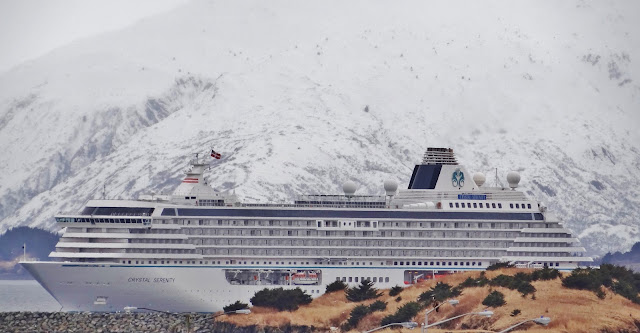 I knew that St. Paul Harbor was another favorite spot for the Deadliest Catch crab boats to tie up in the off season.  I asked the man on the pier if he knew whether any of the boats were here.  He said he thought that the Cornelia Marie MIGHT be at the dock in Dog Bay.  It would require a taxi ride all the way across the island.  I decided to can that idea; & be satisfied with my memories of the Northwestern. 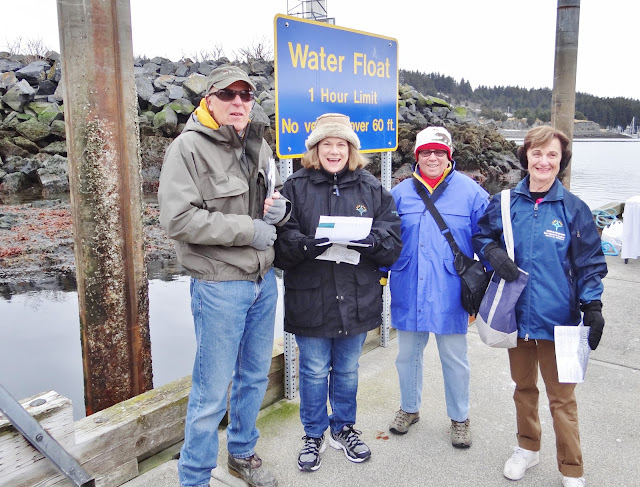 I saw Peggy & Elaine on the pier; & they were exploring the town with another friend of theirs.  I got to the main road; & decided to walk east, then north; making a big square loop.  Walking past Cannery Row, I headed toward the bright blue onion dome of the Holy Resurrection Russian Orthodox Church. It’s a lovely white clapboard building with a bell tower cupola & bright blue dome topped with a gold orthodox cross. 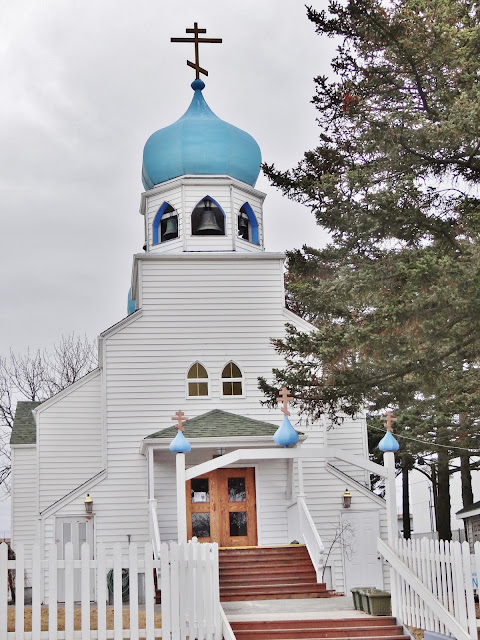 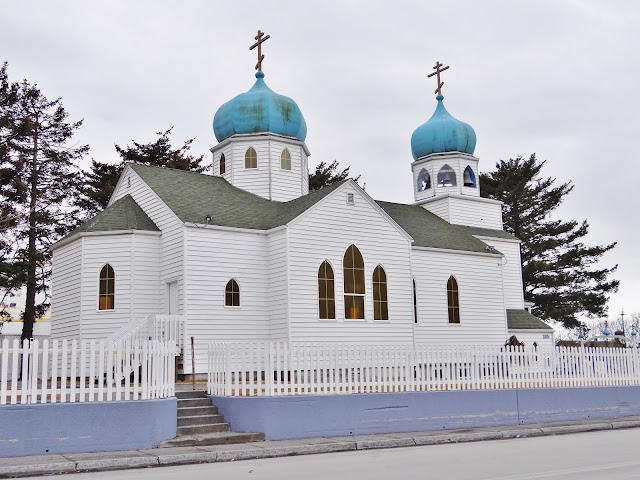 There was a small gift shop on the property (which I bypassed).  I walked around back where there were several marked graves from the mid 1800’s. The ground was mushy from all the melting snow. 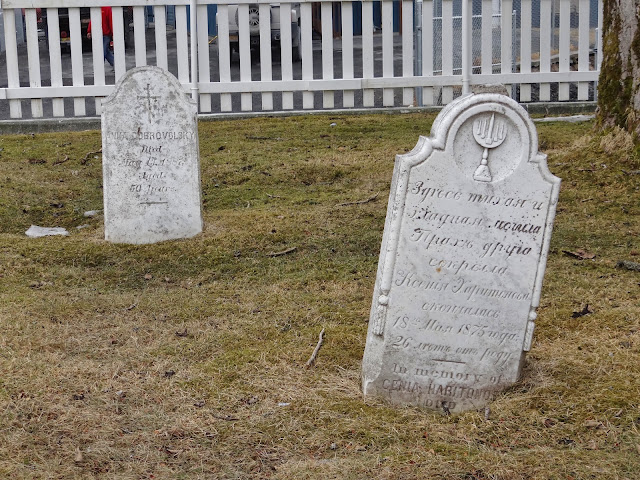 I continued uphill, passing the Alutiiq Museum (showcasing the culture of the original inhabitants).  I also passed the Kodiak Maritime Museum.  I saw a busy street off in the distance; so I made a zigzag in my route. This obviously was the main drag, because there stood a McDonald’s & a Subway across the street.  Along this same street was the tiny Orpheum Theatre.  Obviously just one screen; & they show 2 movies per evening. I was surprised to see they were both current movies (Mirror, Mirror & Journey 2). 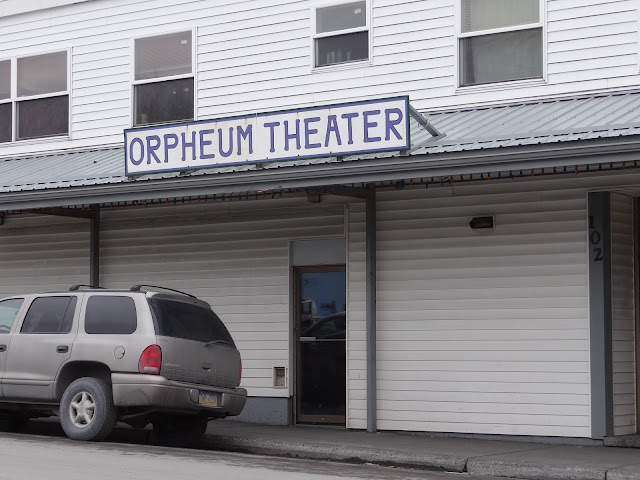 I could see several of the ship’s photographers on the sidewalk coming toward me.  At first I didn’t recognize her because her long hair was hidden under one of those furry Russian hats.  But it was Lianne; & we shared a very long hug.  She thanked me for the card; & we both got a little misty eyed. I’m sure the change of scenery & fresh, crisp air did her a lot of good. 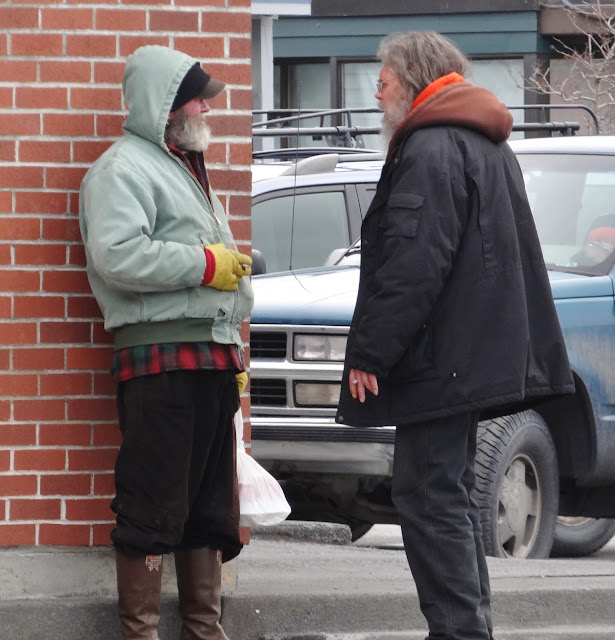 I passed by (but failed to photograph) the tsunami plaque on Lower Mill Bay Rd.  Mother Nature has wreaked havoc here on 2 momentous occasions.  In 1912 Mt. Katmai erupted & buried the town in 18” of volcanic ash. Then on Good Friday 1964 a magnitude 9.2 earthquake destroyed buildings & caved in roads.  The wave hit 35’ above the mean water mark.  The movement of the tectonic plate changed the entire topography of the Aleutian Island chain. 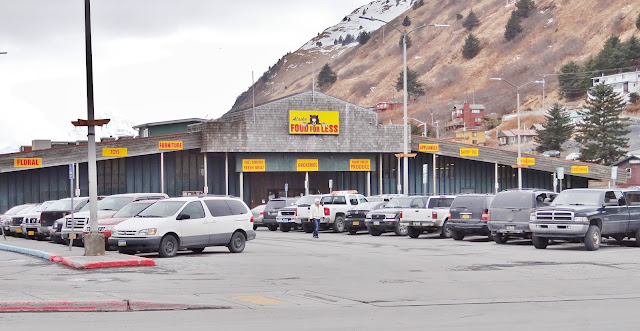 Just a few feet further down the road, I happened upon the most happenin’ place in town....Alaska’s Food for Less.  Talk about one stop shopping; signs across the front of the building read....floral, toys, furniture, appliances, bakery/deli, ATM machine & post office.  Oh & by the way, they have groceries, farm fresh produce & full service fresh meat.  I couldn’t pass this up. 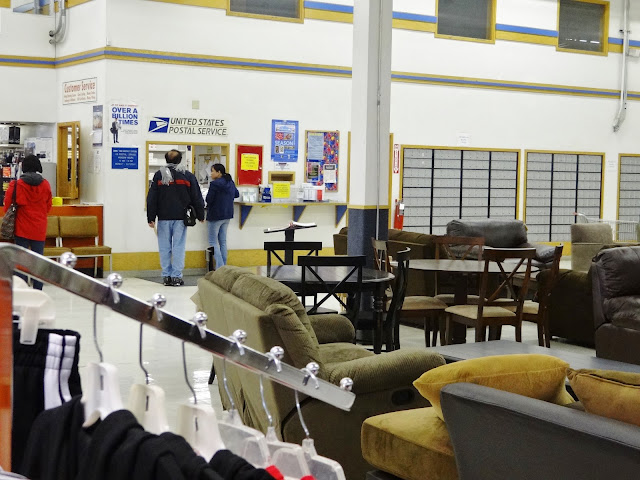 I saw several familiar faces as I walked down the aisles on the grocery store side.  Pax picking up little snacky things.  Josef (Hotel Director) had been craving candy bars; & had several in his basket.  On the opposite end of the building was a smathering of a little of everything.  There were racks of clothes, bedding, a few pieces of furniture, several appliances. Smack dab in between was a post office window & a wall of mail boxes. My big purchase was an ear band warmer ($4.95). 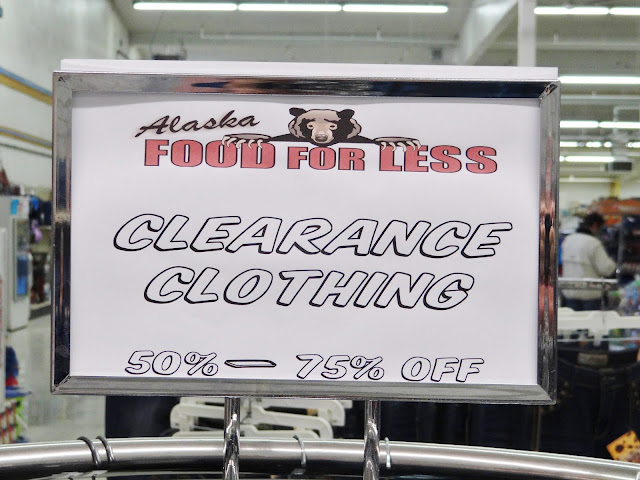 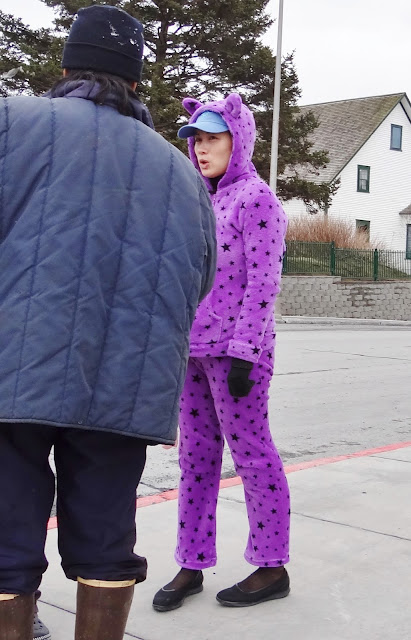 It was a fun little
adventure.  First
thing I saw when
I walked out was
this 'purple
pussycat'.  I
don't know if
she was one of
ours or one of
theirs.  At least
she looked warm.
And she is wearing
my favorite color.

Continuing back down the street toward the pier, I stopped to look at the plaques at the Harbormaster’s office. 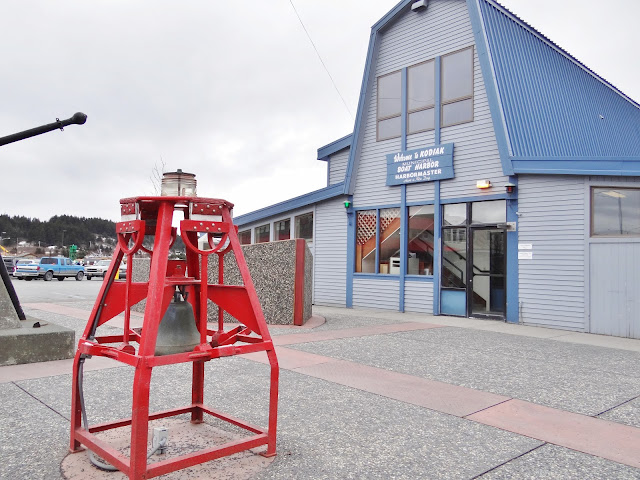 Across the street was the cozy St. Paul Plaza Mall.  I don’t think anybody owns a car here. 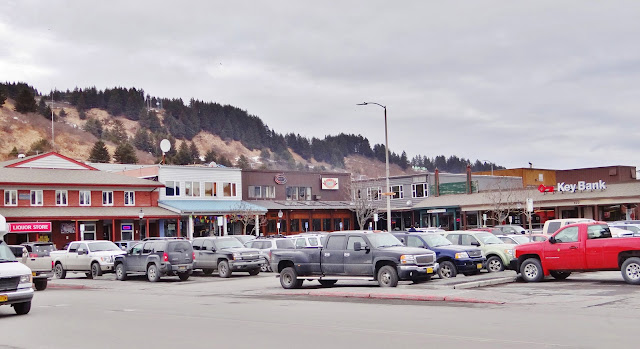 I finished the ‘loop’ when I returned to the St. Paul Boat Harbor.  Lots of personal vessels of various sizes & fishing boats loaded with nets & buoys.  I ran into Elise & Kinsey who were coming as I was going.  Back down that long, steep, metal grated portable gangway & to the waiting tender. 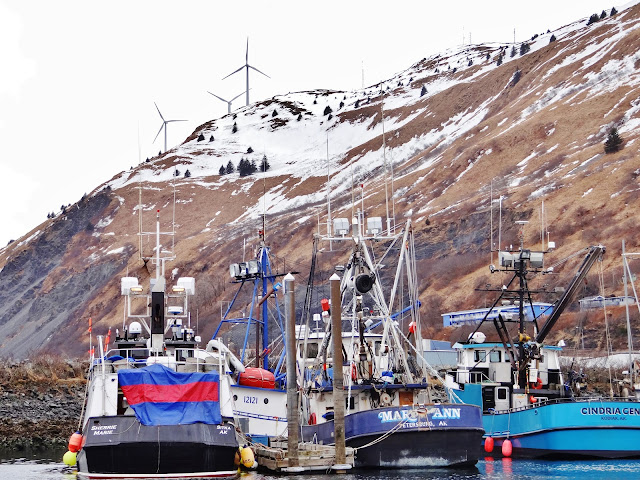 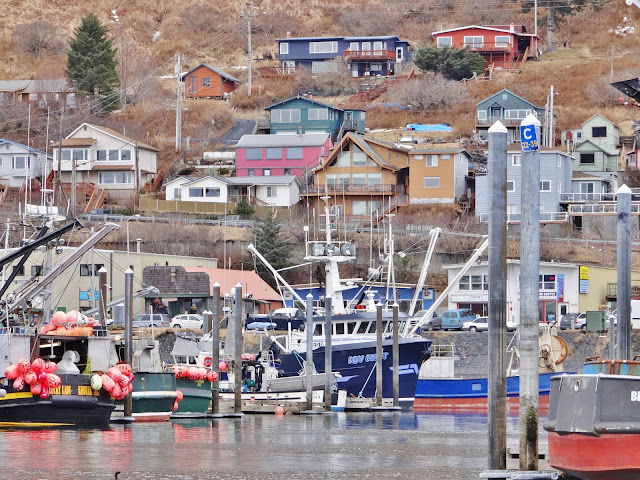 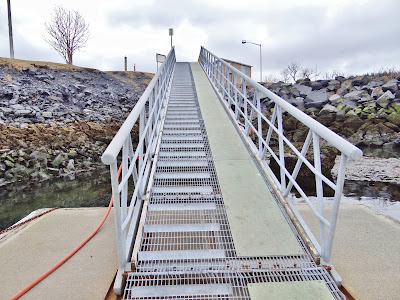 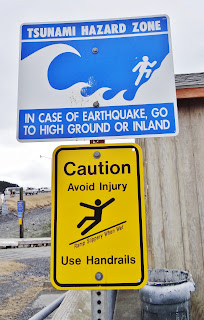 It was 1:15 when I got back onboard; & I went straight to the dining room & had a quick lunch.  I had a cup of three pepperpot soup with spaetzle followed by a reuben sandwich.  Both were delicious & really hit the spot. 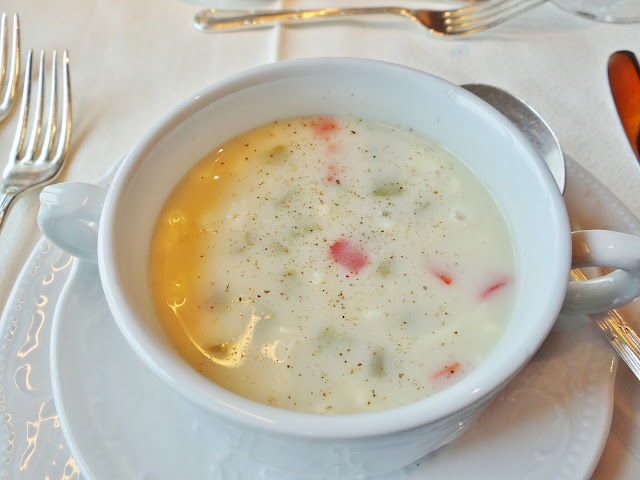 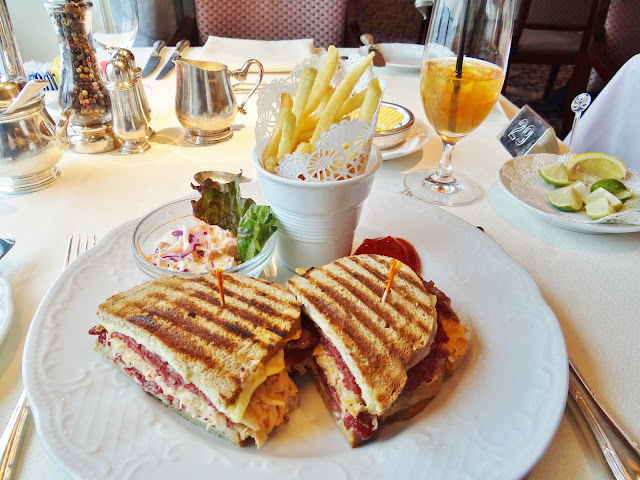 I went out on the aft deck to take a few more photos.  There was a HUGE flock of birds over by the craggy rocks.  Several eagles soared above the ship. In a matter of minutes this dense fog bank rolled in, followed by huge flakes of blowing snow.  It was beautiful; but I got chilled to the bone. About 3pm I went in, got under the covers to warm up & fell fast asleep. 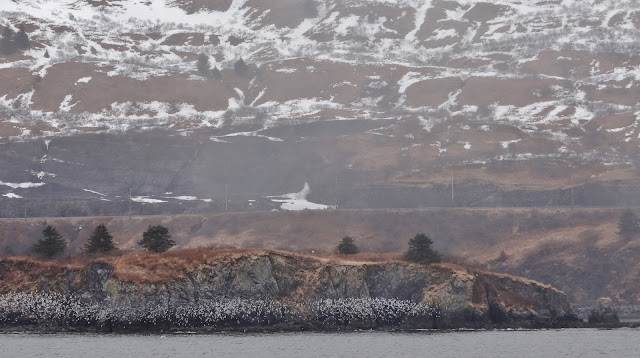 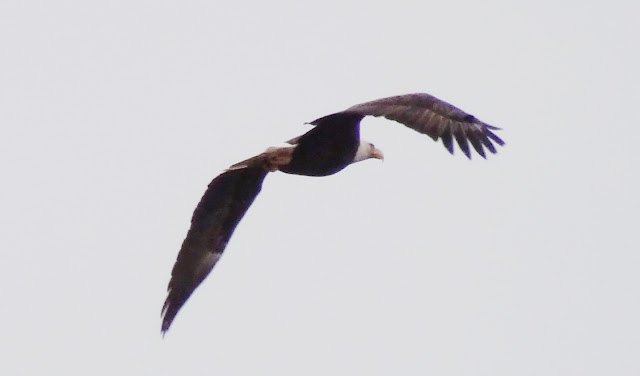 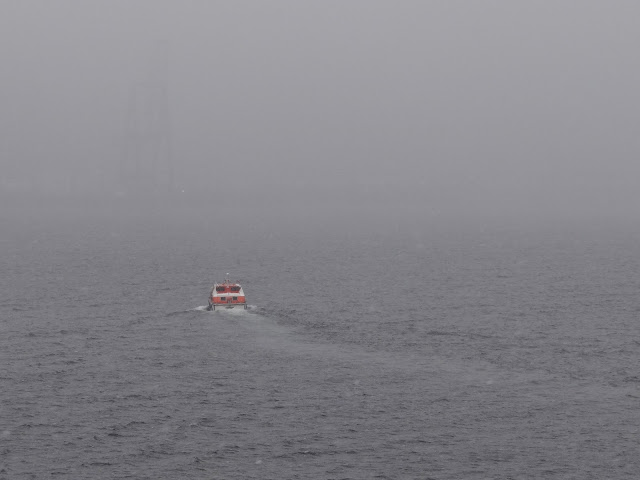 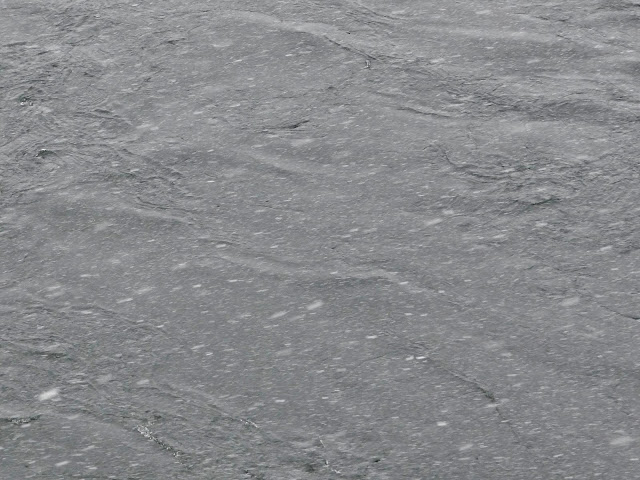 Celeste rang the doorbell about 5 (first time the doorbell’s been rung in 2 months); & I nearly jumped out of my skin.  She visited while she was waiting for a load of clothes in the dryer.  We had time to compare notes on our day ashore & catch up on gossip.  We were supposed to set sail at 6; but we seemed to be spinning around the bow line in circles for at least an hour after the last tender returned.  We had no explanation as to why Louis didn’t sing or why we left so late. 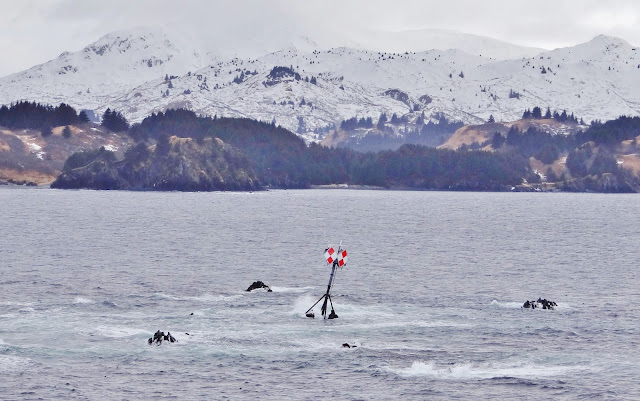 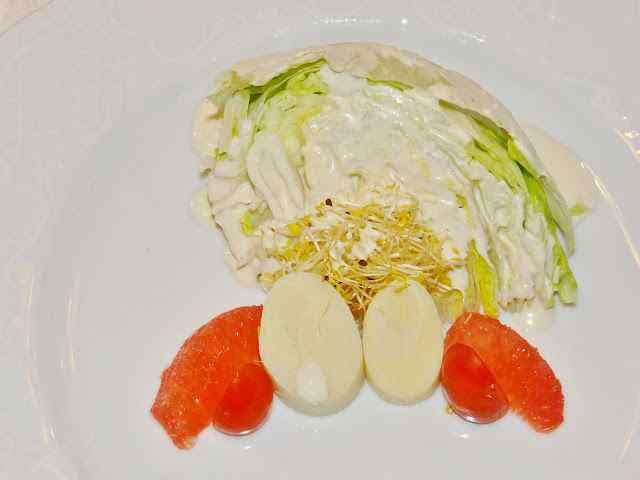 Next I had an appetizer portion of gnocchetti pasta with tomato sauce, pancetta, cauliflower & fresh herbs.  Never had pasta with cauliflower before, but it was barely detectable.  It was delicious. 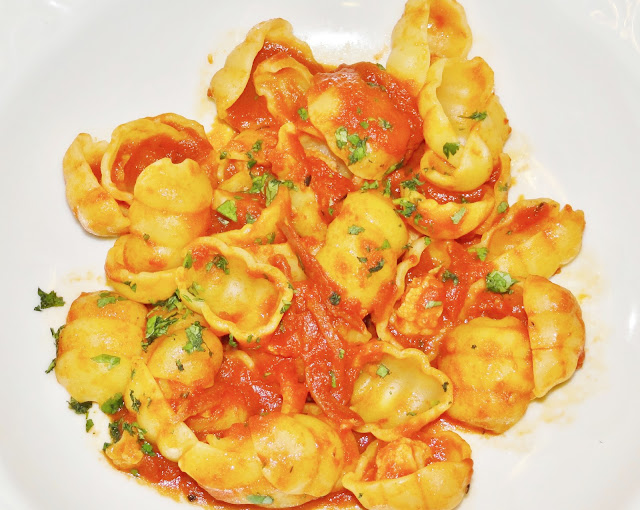 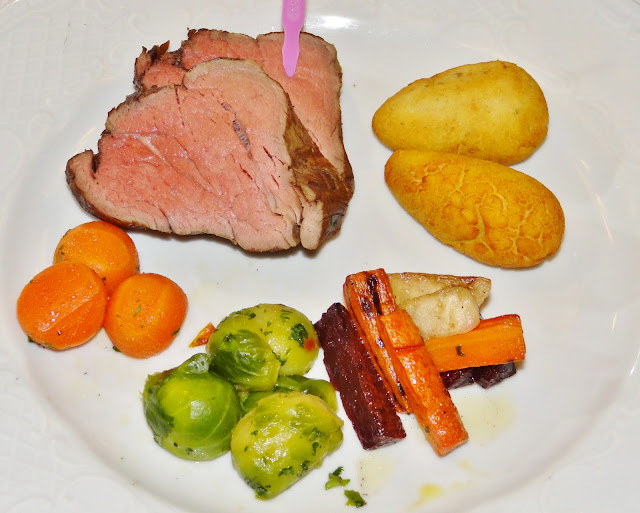 Fabulous and thank you. You have a great memory and take great notes :)

You commented on my blog. We have a lot in common - and we also live in Naples, FL. my email is mec419@gmail.com if you can contact me. Thanks! Elaine