I had the alarm set for 7; but woke up before then, legs itching like crazy.  I used the last of my Benadryl spray; & took an extra dose of allergy medicine. I’m still going to try to hold out another 5 days until I can see my own doctor.

It’s overcast; 45*.  It feels cooler, probably because of the humidity.  It’s going to be another one of those days of buzzing sea plane engines; & there’s a heliport up by the bow of the ship.  Certainly convenient for those who will be doing flightseeing type tours.  Capt. Glenn’s thought for the day......”Go as far as you can see.  When you get there, you will be able to see even further.”

No time for breakfast, I had to be in the Galaxy at 8:15 for my morning tour. On a previous visit to Victoria, I had the privilege of hitting all the major sites (including tea at the Empress Hotel & touring Butchart Gardens).  I was anxious to participate in one of the complementary voluntours; & the one offered today was the least physically taxing.  Today I would volunteer at the Mustard Street Food Pantry (VIC-FV).  We were greeted out on the pier by some locals dressed in vintage costumes.  They gave us Victoria lapel pins as a thank you for volunteering our time. 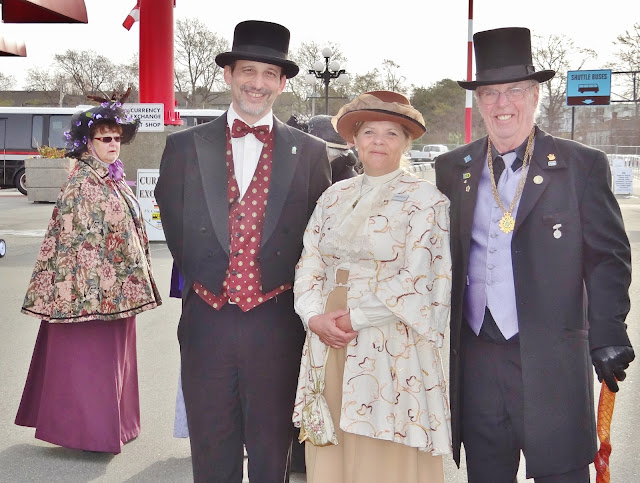 Our destination was on the exact opposite side of town from the port; so we enjoyed a nice scenic tour on the way there.  The tour group was limited to just eight; & (photographer) Christine accompanied us. 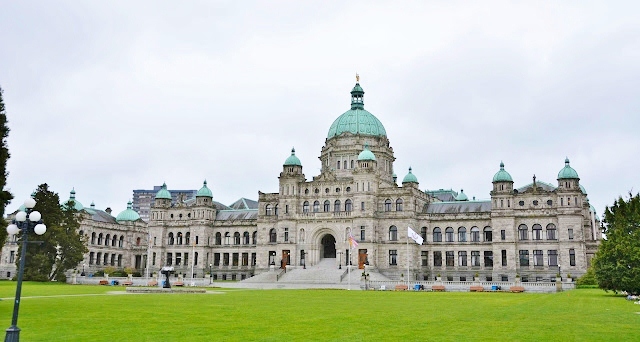 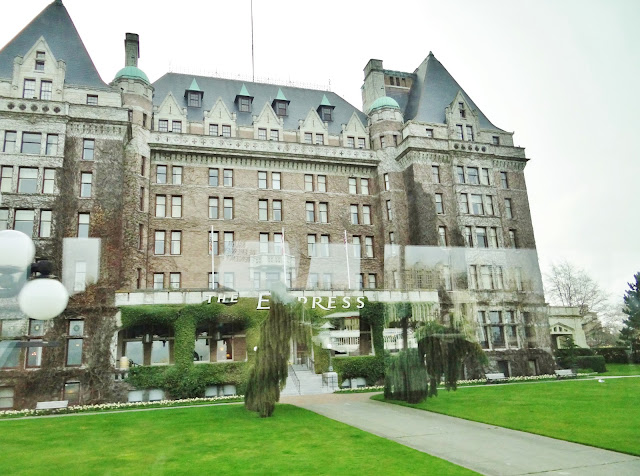 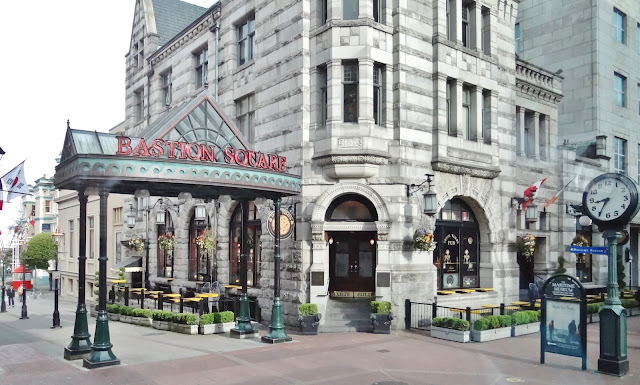 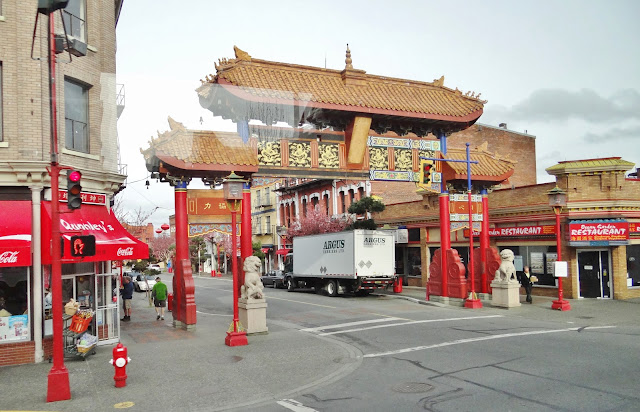 The Mustard Street Church complex is a series of small connected buildings in a light industrial area just north of Chinatown. We were met in a lobby (intake) area; & introduced to Nancy (the Administrative Director) & Rudi (the Asst. Food Bank Director).  He gave us a short tour & at the same time told us how Rev. Tom Oshiro started it all 33 years as a tiny mission ministry. 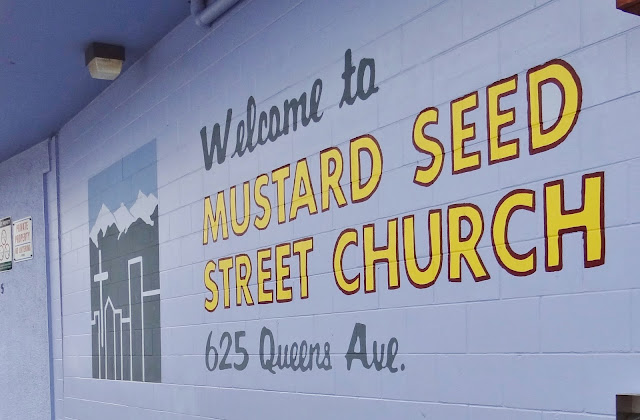 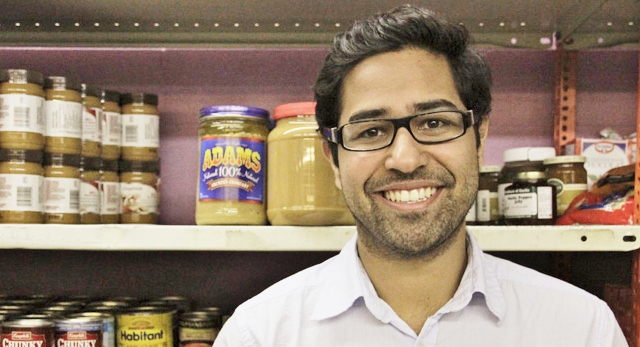 Rudi
They have branched out into 35 agencies, 12 ministries, a halfway house for recovering addicts, social assistance programs for out of work families & serving 7,000 hot meals per month.  They sponsor a free clothing ‘bank’, help released prisoners find work & housing, & help mental patients reacclimate into society.  They have accomplished all of this with a staff of only 25 & approximately 75 volunteers.  Very impressive organization. 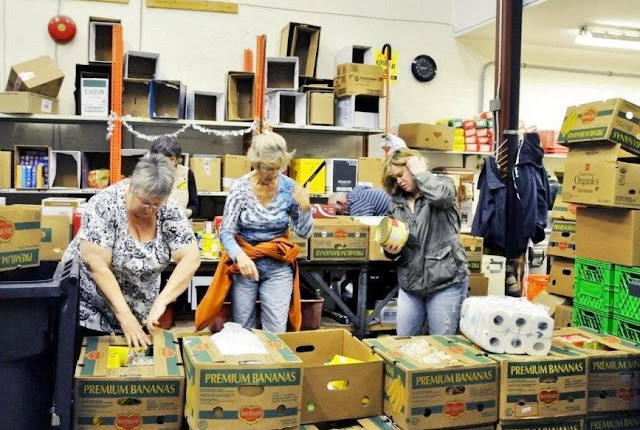 Rudi asked us to take our coats, purses & cameras up to a locked conference room.  They did not allow photos to protect the anonymity of their ‘clients’. We were escorted into the warehouse where all the food donations come in. Half the group went to the pantry area to fill the food hampers from a shopping list.  The rest of us unloaded cases of food, inspected packaging for leaks & checked expiration dates.  We sorted foods into categories, which were later used to stock the pantry shelves. 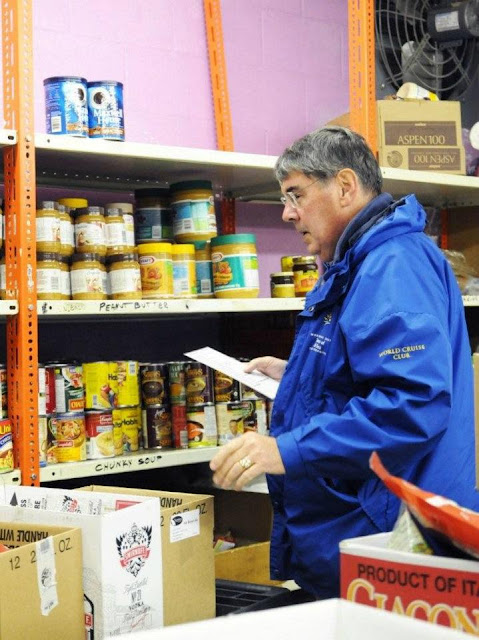 There was a local TV reporter who came with a camera crew to do a piece on Crystal voluntours.  They interviewed Jennifer from our group, specifically because she herself had gone through a rough time when she needed help. And since then she has volunteered in her local area food bank.  After 3 hours, we had unpacked all the donated food stuff; & I was walking around looking for something else to do.  An elderly gentleman walked up; & asked if I had come from the ship.  He introduced himself.....it was Reverend Tom. 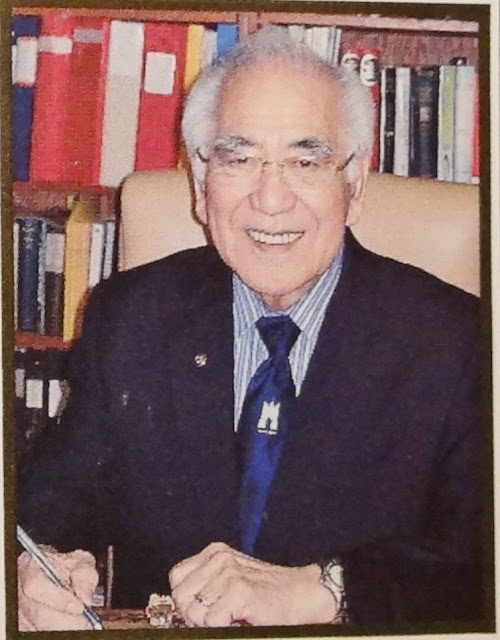 Such a sweet, unassuming gentleman.  Although retired now, he stops by a couple of days a week to check on things.  He explained to me two recently added events that are intended to restore pride & dignity.  On Saturdays they have ‘soup & chat’ sessions (to encourage folks to get involved in civic activities); & on Friday nights they have the ‘street cafe’ (serving the needy adults & their children, family style with tablecloths & centerpieces).  I am so glad I did this.  I met some truly amazing people; & was bowled over by all that they continue to accomplish without any help from the government. 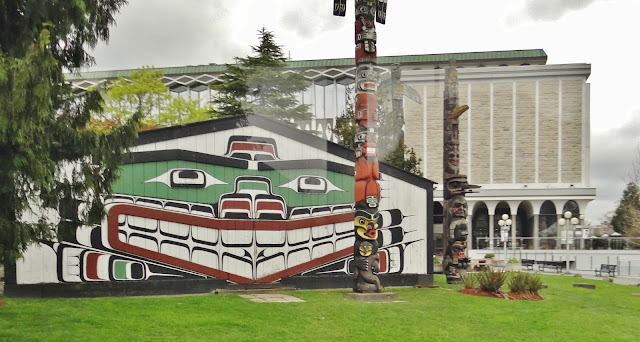 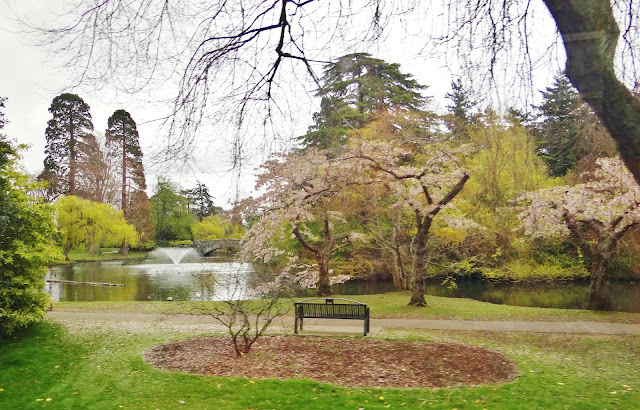 We arrived back at the ship just before 1pm.  I headed straight up to the Lido for lunch.  There were so many interesting looking things, I took a little taste of everything.  I had some prawns, hearts of palm, a little vegetarian shepherd’s pie, sauteed green beans, half grilled cheese & ham sandwich & roasted red pepper crusted strip loin steak with chili hollandaise.  I had more than I could eat; but it was all delicious. 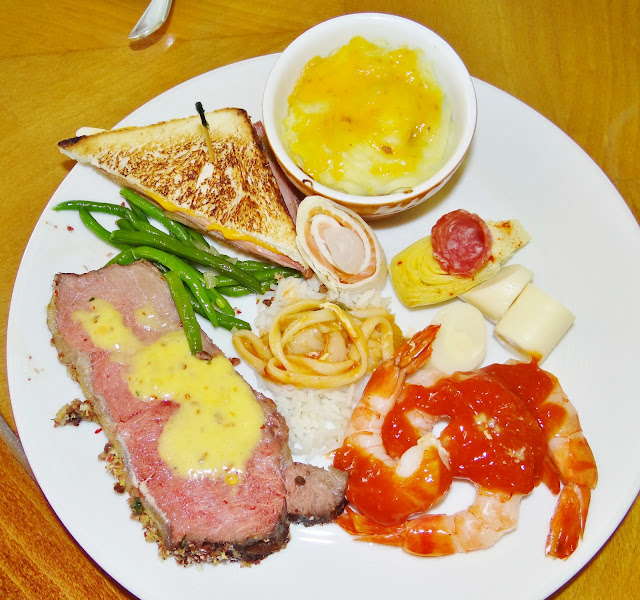 I went down to the theater to watch “Friends with Benefits”.  It had potential; but I was just too stuffed; & my left knee was aching.  I only lasted 45 mins.  Went ‘home’, took some Advil & laid down.  I noticed that it was raining outside. 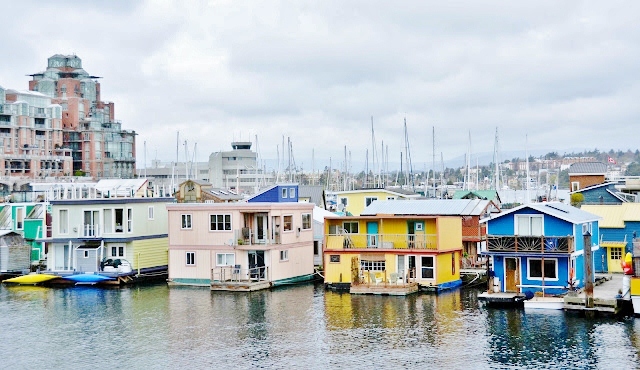 Celeste called about an hour later to tell me about her tour of Butchart Gardens.  She said the tulips & hyacinths were gorgeous; & they were served tea in a private room.  She had a great time.  When I got off the phone, I fell right back to sleep.  I woke up when I felt the engines vibrating as we pulled away from the dock at 5.  I stepped out back to take photos.  It was still grey with low clouds.  There was a good bit of barge traffic in the Straits of Juan de Fuca.  It was eerily beautiful with the mountains of Washington state in the background. 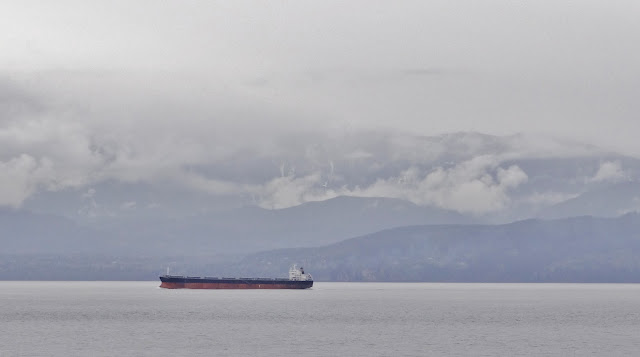 I dressed for dinner a little early.  I went down to the Cove where I found Pat, Ray, Betty & Kris.  They filled me in on their day.  I met my dinner companions in front of the dining room at 8:30.  It took several weeks; but Johann, Melanie (both Concierges), Leroy (Reception) & Jelena (ShorEx) were finally able to coordinate their schedules.  Unfortunately, Lianne & Christine could not get the time off. 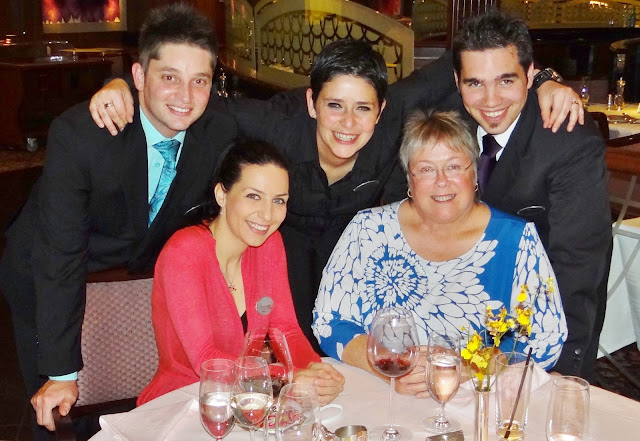 It’s such a thrill to get to know these wonderful people in a relaxed setting. We laughed & had so much fun.  My only regret was waiting so long to set this up.  I should have asked them long ago; & maybe we would have had the chance to get together more than just this once.  Leroy had beer; the rest of us shared a couple of bottles of wine.  Yes, I was jovial. 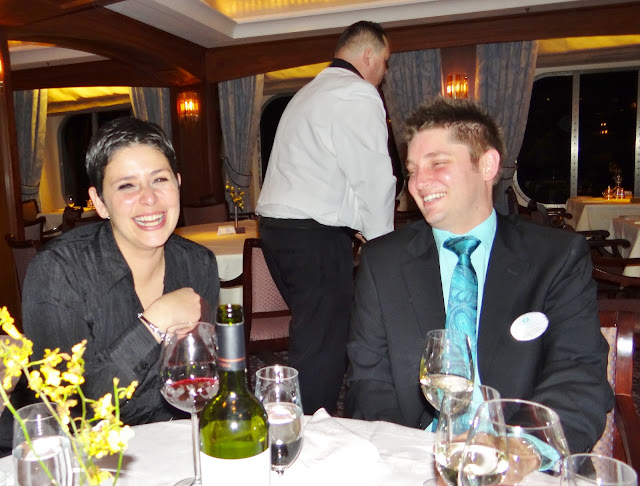 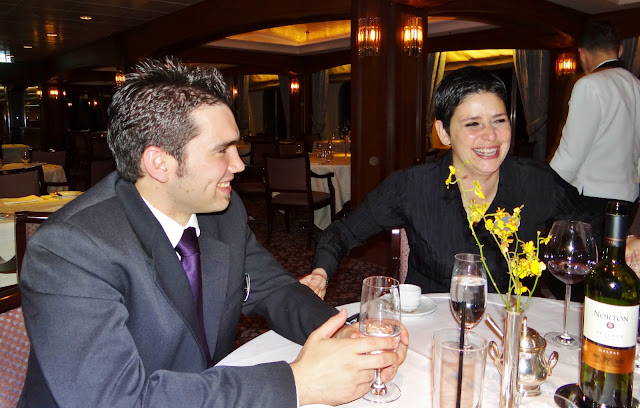 Tonight’s menu looked so good; I had a hard time making a decision.  I started with a deliciously rich lobster pot pie with herbed crust.  And followed that with an ordinary mixed salad with blue cheese dressing. 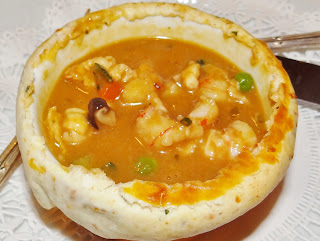 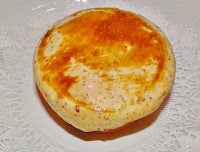 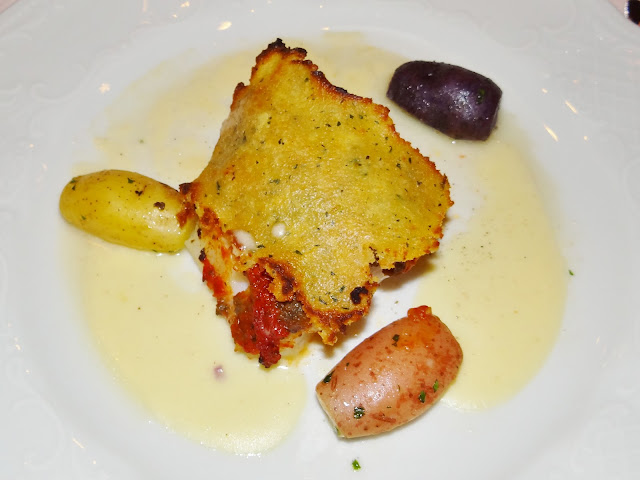 There was a tempting dessert on the menu, that I could not pass up.  It was called ‘love potion’; & consisted of a caramelized pecan tart topped with dulce de leche ice cream.  NOTHING satisfies more than a double shot of caramel! There was also a little shot glass size serving of chocolate sour cream mousse with chocolate shavings on top.  The sour cream toned down the sweetness of the chocolate.  This is the most orgasmic dessert I have ever tasted. Everybody else was going to pass on dessert; but I asked for chocolate dove cake for them to share.  They loved it. 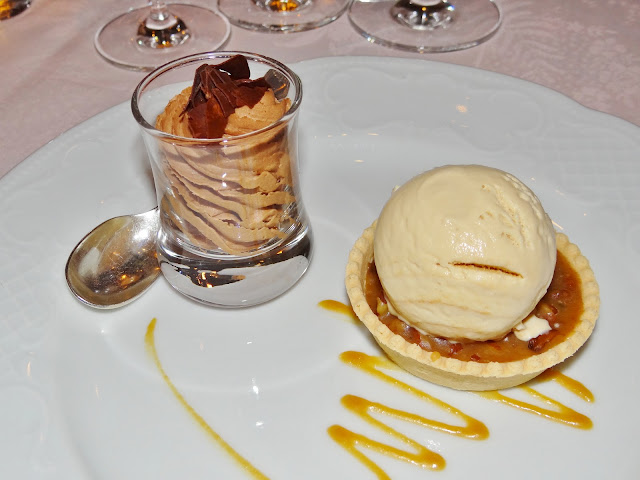 We sat there talking so long that the head waiters had already sat down to eat their own dinner a few tables away.  We had to pry ourselves away; & said our goodbyes in the Cove.  Well, except for Leroy, who walked me to the elevator where we stood & talked for a while longer.  What a great evening.

When I made it back to my cabin at 11:15, the ship was really rocking.  I probably should have done some more packing, some computer work, or something.  But I think I’ll take advantage of the motion & the wine; & hopefully fall right to sleep. 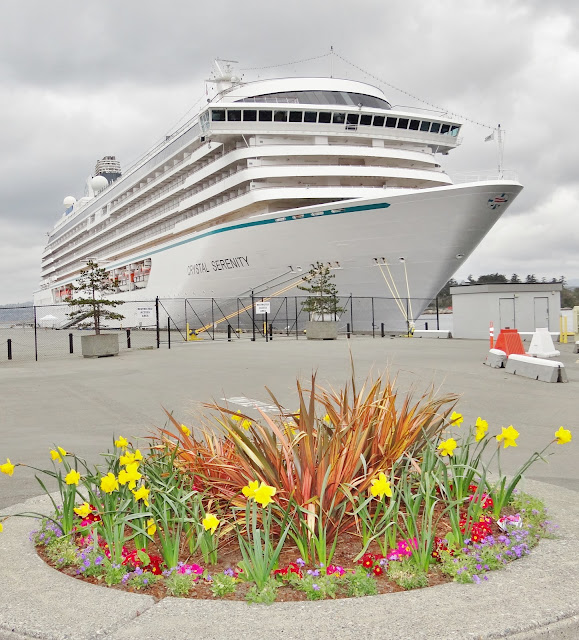