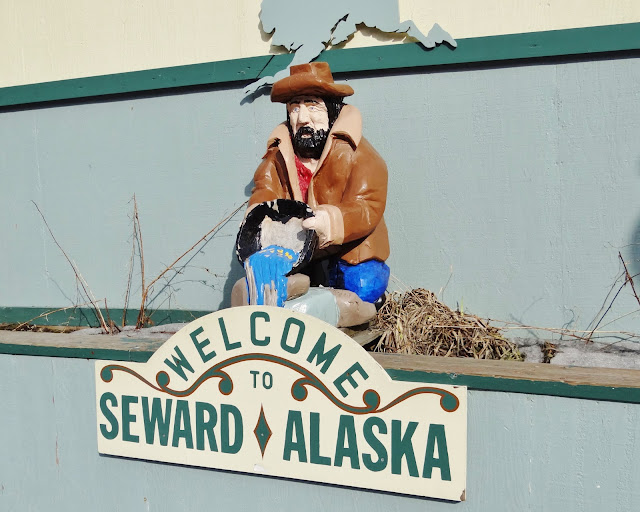 I did not set an alarm since I hadn’t booked a tour or made any early plans. I did wake up at 9 when Capt. Glenn made his morning announcement.  It was mostly cloudy & 34*.  All I could see from my verandah was concrete, stacked with shipping containers & cranes.  But there was a beautiful snow capped mountain range off in the distance. The Capt’s thought for the day was....”Try & fail; but don’t fail to try.” 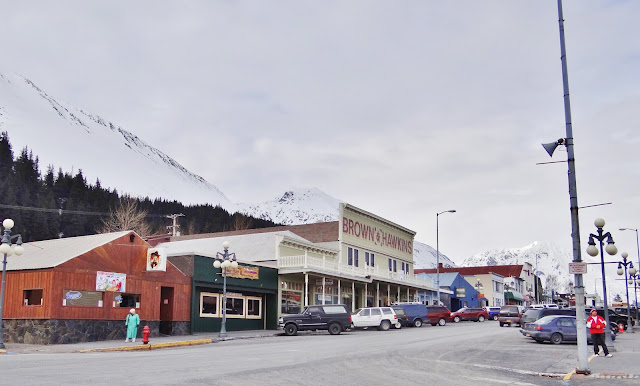 The bed felt so good & warm; I didn’t want to get out of it.  I stayed put, knowing that I would be awakened at 10 when they sounded the alarm for crew lifeboat drill.  Shortly afterward, I went down to the laundry room to see if it was busy; it was not.  So, I put 2 loads in.  I made a sandwich for breakfast from my leftover tenderloin & a roll & stood on the verandah watching the crew assemble on the deck below me.  There were lots of faces I didn’t know; but I did spot Melanie, Christine, Bruno, Augusto & Jacque Brown.  I ran into Celeste & Bill as they were leaving their cabin, heading ashore. 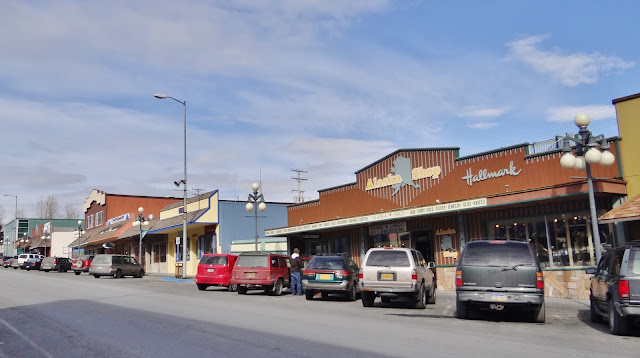 I finished my laundry & left the ship at 12:50; catching the 1pm shuttle into town.  Some of the tours offered today included whale watching, snow skiing & even a bus transfer (3 hr) into Anchorage.  Seeing Anchorage was tempting; but my days of 10-12 hr days of touring are over for this vacation. I was quite content to just ramble the streets of Seward & enjoy the snow. 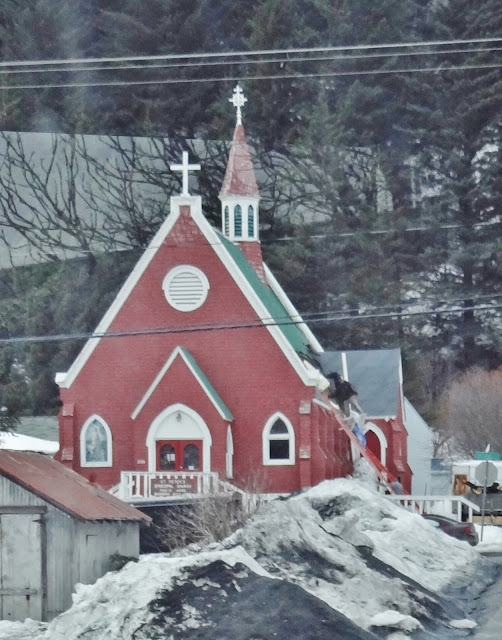 Seward (located at the foot of Mount Marathon on the Kenai Peninsula) is the smallest of all the Alaskan towns we have visited (just under 3,000 residents); but I found it to be the most ‘normal’ looking.  Normal in the respect that it looks like thousands of other small towns in the U.S. “Town” consists of a neat grid pattern of streets; with names like 1st, 2nd, A St., B St., & streets named after Presidents.  They are lined with darling one & two story storefronts & restaurants with quaint names like: ‘Once in a Blue Moose’, ‘Sweet Darlings’, ‘The Train Wreck’, ‘Nettie’s Roadhouse’, & ‘The Ranting Raven’. 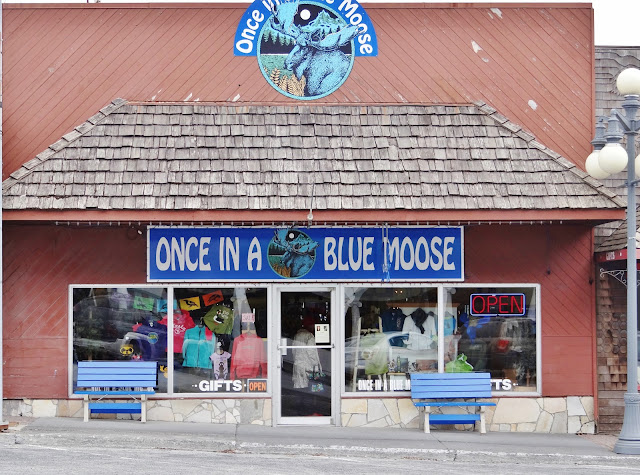 Another surprise was the more than a dozen lovely murals that were painted on the sides of buildings, sometimes hidden on side streets & in alleys. Seward is truly a beautiful little town, home to some of the nicest people you’d ever want to meet. 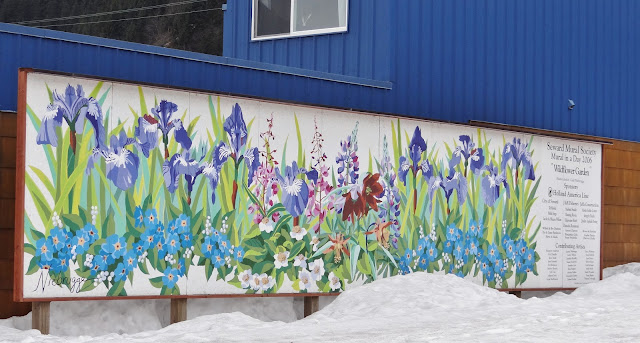 I got off the shuttle at the first stop, which was at the top of the hill on the corner of Adams & 4th (Main St.).  On that corner sat tiny Kawabe Park, piled high with old snow.  A huge botanical mural (entitled 'Wildflower Garden') covered the entire side of a building next door.  It was created by a group of artists in 2006; sponsored by Holland America Line & various merchants around town. This is the first of many I would discover. 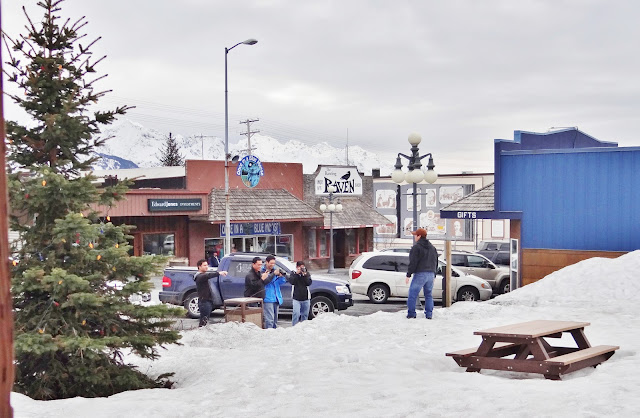 Notice the mural between the blue bldg. & the Ranting Raven
entitled 'Postcards from our Past' 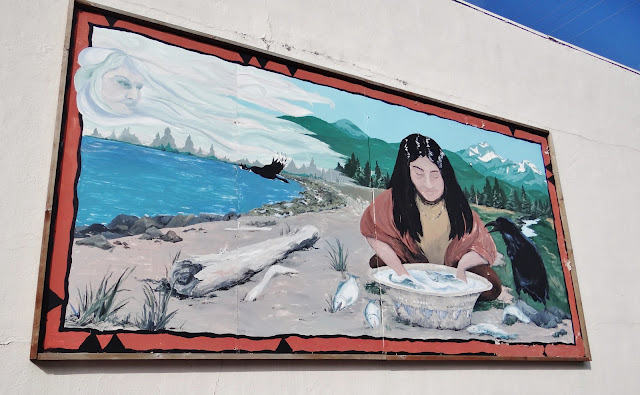 'A Tribute to Commercial Fishing' mural

As I walked down Main. St. I noticed many interesting little things; statues of orca whales & salmon & a beautiful wooden door carved with a whale fluke. Things that would have gone unseen if I wasn’t on foot. The sun started to break through the clouds; & it felt much warmer than the mid 40’s.  During my walk, I came upon lots of crewmembers.  I ran into Lizzie, Peggy, Elaine & Chuck outside the aquarium. 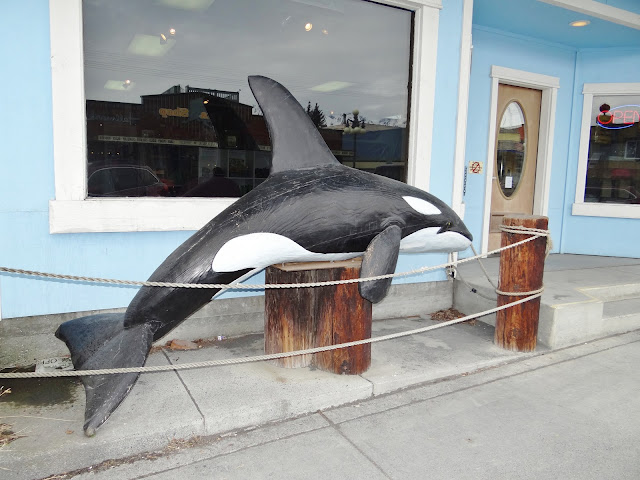 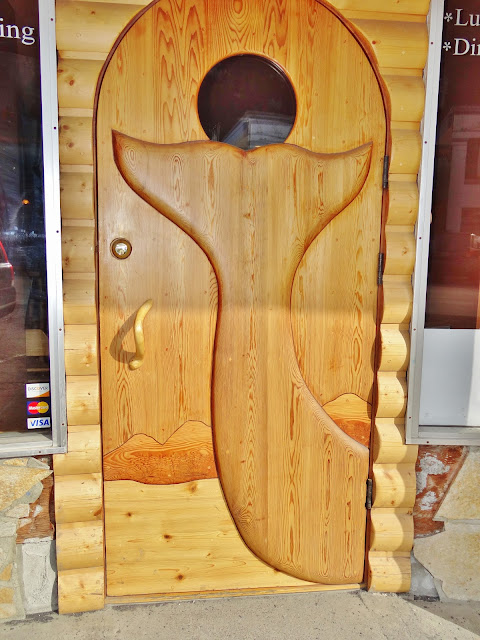 My destination was at the bottom of the hill, the Alaska SeaLife Center; a research facility, rehab center & public aquarium that was built with funds donated after the Exxon Valdez oil spill in 1989.  Admission was $20. 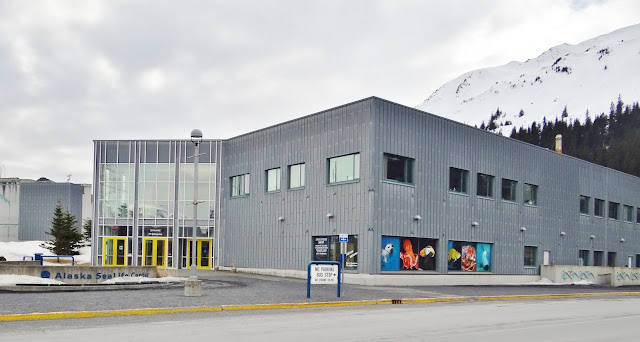 They had quite a few tanks of marine life on display. What came next was a lifelong dream....to see a puffin. 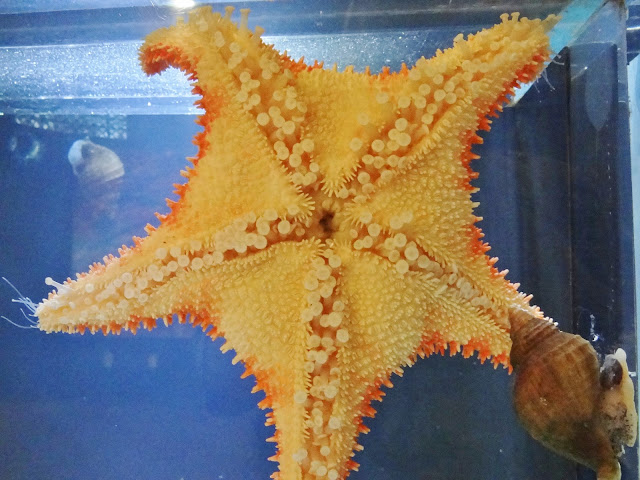 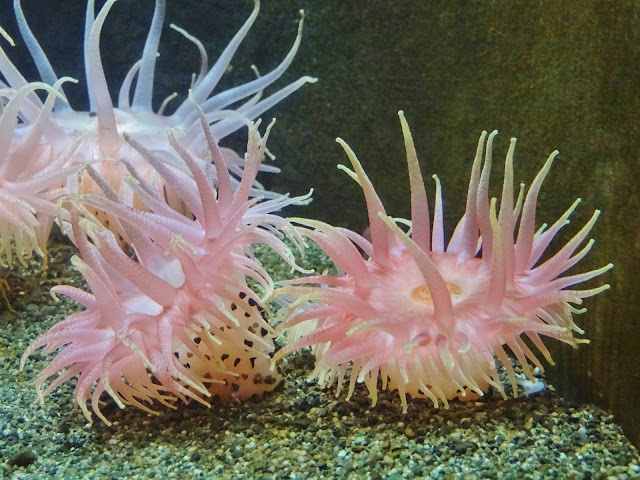 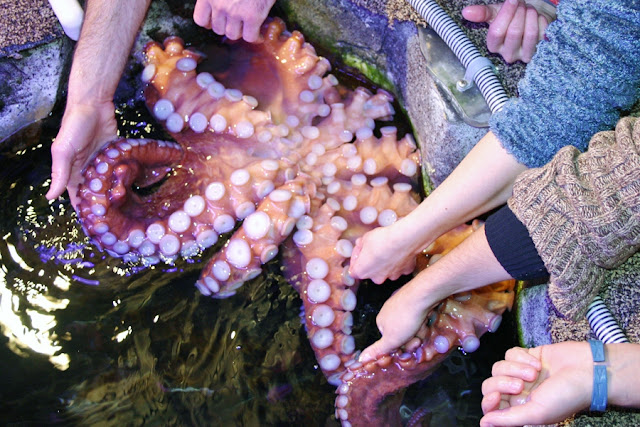 There is an outdoor aviary & pool with plenty of rock cliff walls for roosting. You are allowed to walk into this enclosure & walk right up next to the pool (which is about chest high).  There were several species of waterfowl; but I only had eyes for the puffins.  I find everything about them intriguing.  Their beaks change colors; from drab gray in the winter to the bright colors you see here (which helps to attract a mate).  They’re smaller than I expected, between 10-12” tall; & they usually choose their mate for life.  I like their ‘pigtails’. 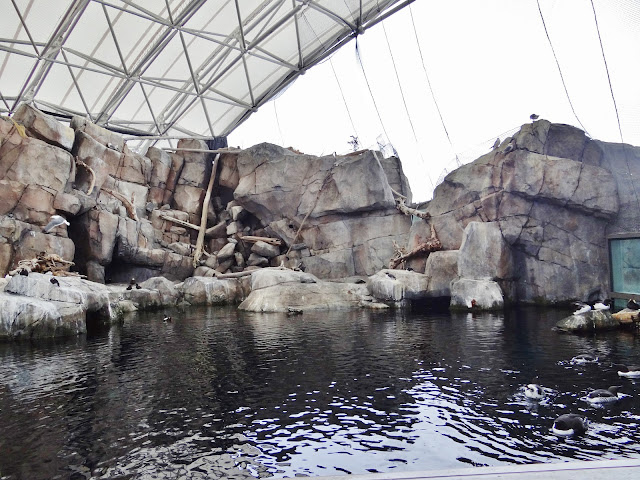 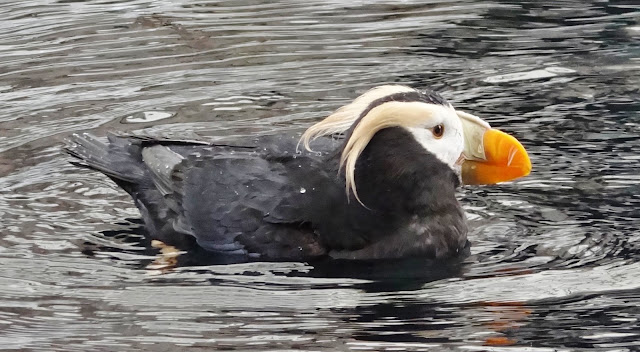 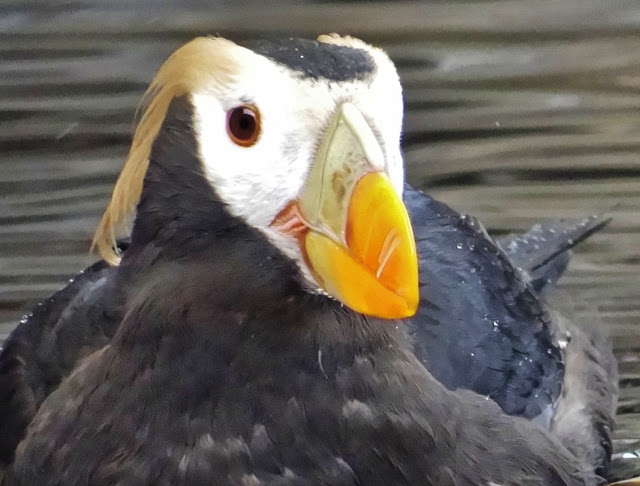 Next door was the grotto for the steller sea lions.  The young ones have the saddest eyes.  Some of these guys were massive, up to 9-10’ long! Although they are not on the endangered species list, they were excessively killed for food & their skins; & are now considered threatened.  My timing was good; feeding time.  That meant that the older sea lions would hop up on the rock heads & do a few tricks for food.  Unfortunately the side with the best view had the dirtiest windows. 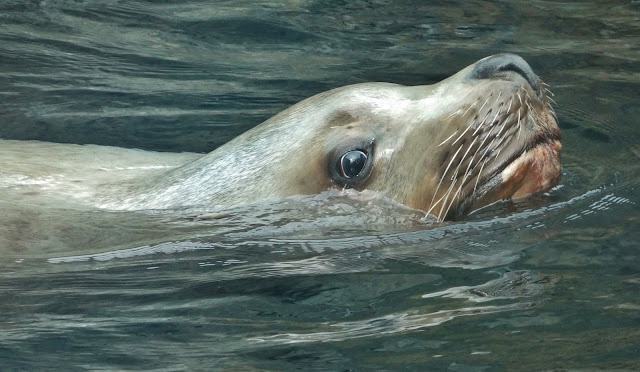 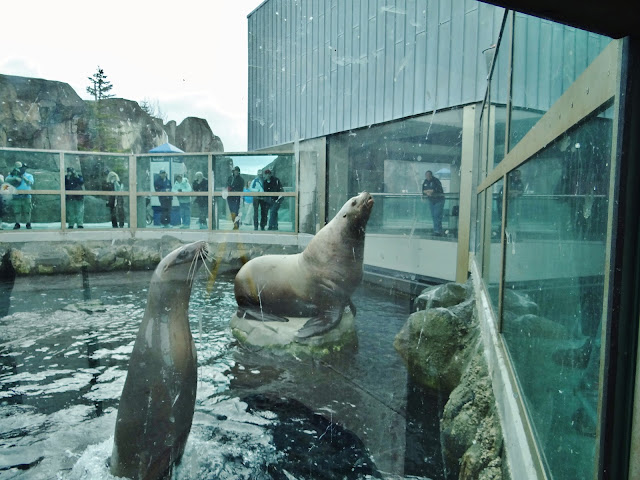 Next door there were smaller harbor seals.  There weren’t many of them; & they were all in or under the water.  All you could see were those huge brown eyes with ‘paw print’ shaped eyebrows & v-shaped noses just above the surface.  They told us that they can grow up to 6’ long; & that the females usually outlive the males by about 10 years. 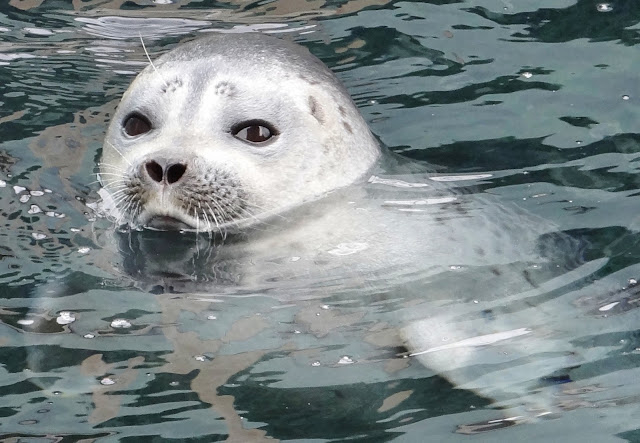 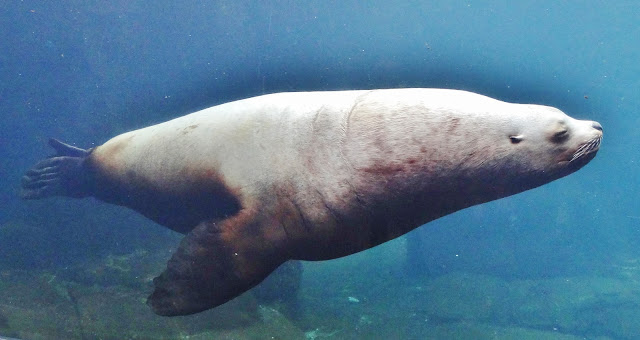 There was an observation deck on the back of the building that looked out over Resurrection Bay & the mountains.  It had turned cloudy again; & very cold with the wind off the water.  But it was beautifully serene.

Back inside & working my way down one level towards the exit, I came upon a large room with benches where one could sit & watch the underwater antics of the seals.  There were children with their noses pressed up against the glass.  I sat for a while; watching them glide through the water had a very calming effect. 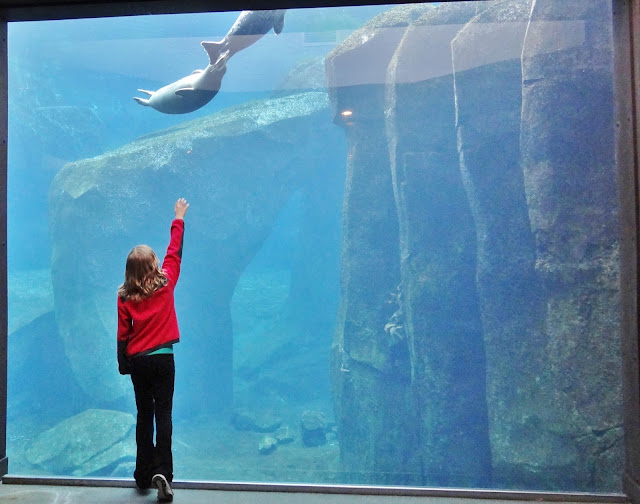 Across the street from the SeaLife Center was a large mural of humpback whales painted by noted marine artist, Wyland. 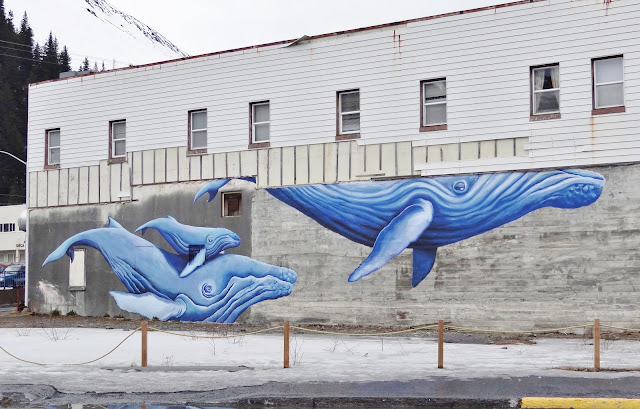 I walked over to the Iditarod Trailhead Park at the end of the peninsula to see the Founder’s Monument.  It honors John Ballaine who founded Seward in 1917. 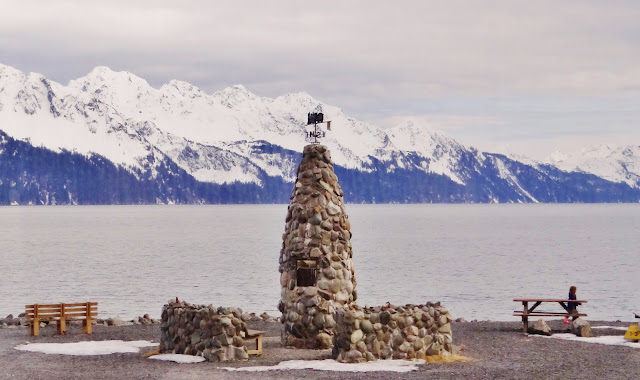 As I was walking back up the street, I heard someone call my name. There was Kris across the street; he & Betty were having coffee at Sweet Darlings. I went over; & chatted for a while as we sat at a table by the window watching the street traffic.  Pax & crew would come in occasionally to pick up a warm beverage.  We decided to head back toward the ship around 5, riding on the same shuttle. 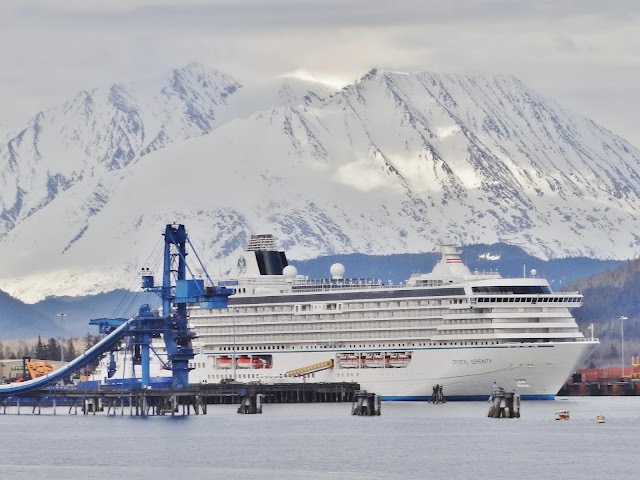 Kris was looking for something specific that he’d been unable to find; & the driver suggested he stop at one of the big stores closer to the docks. He dropped them off about a block away; & I arrived back to the ship at 5:15.  I went straight to the Bistro, where I found Celeste & Pat.  It was nice to see Pat out & about, although she was still feeling a little punk. Celeste said they visited the SeaLife Center as well; & that she loved Seward as much as I did. 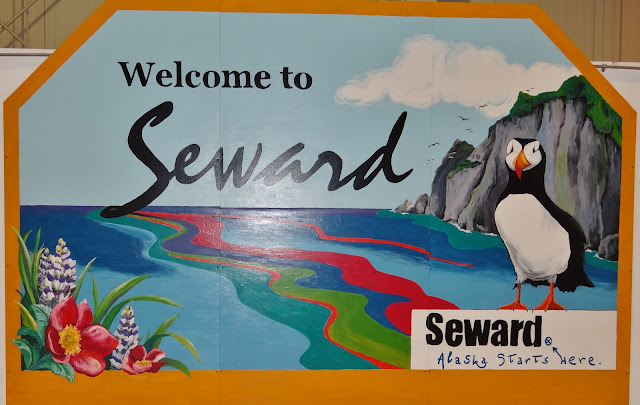 I already knew I didn’t want to order from the dining room menu tonight; so I hurried up to the Trident Grill before it closed at 6.  I ordered a cheeseburger & hot dog with all the fixings, but without buns. I guess it is time to back off a little on the carbs.  Withdrawal is going to be a bitch! 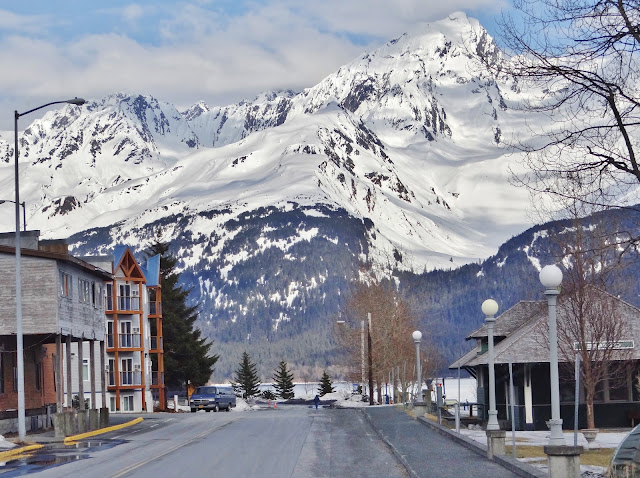 I went out on the aft deck to take some more photos.  The clouds had given way to a perfectly blue sky; & the late afternoon sun was so beautiful on the snow.  Sunset wasn’t for another 3 hours; but it was about to dip behind Mount Marathon.  It was getting dark in the valley. 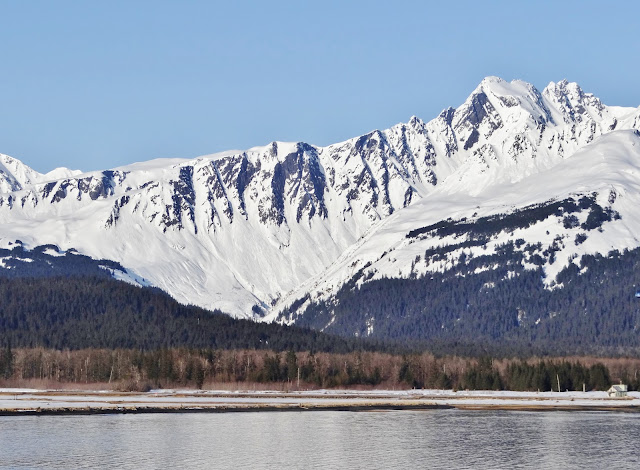 I went in to warm up about 7:30; & ate dinner.  Sorry, no food photos today. Leftovers & a naked burger & dog are not a good representation of Crystal’s otherwise excellent cuisine.  I’ve become oversaturated with photos; I couldn’t look at any more even if somebody paid me. 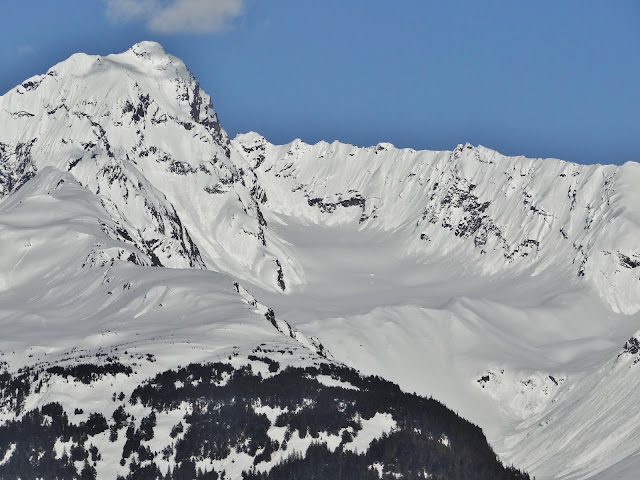 I showered & slathered on more Benadryl spray on my legs.  It’s not the most pleasant of topics; & that’s why I don’t bring it up every day.  But the itch is about to drive me INSANE; & it has now spread up to just above both knees.  The friends that I show it to, still think it’s a simple allergic reaction to something; & that I will NOT die from it.  Since I have no control of my scratching while I’m asleep, I’m taking clippers & cutting my nails down to stubs.  I don’t know what else I can do....wear gloves to bed? 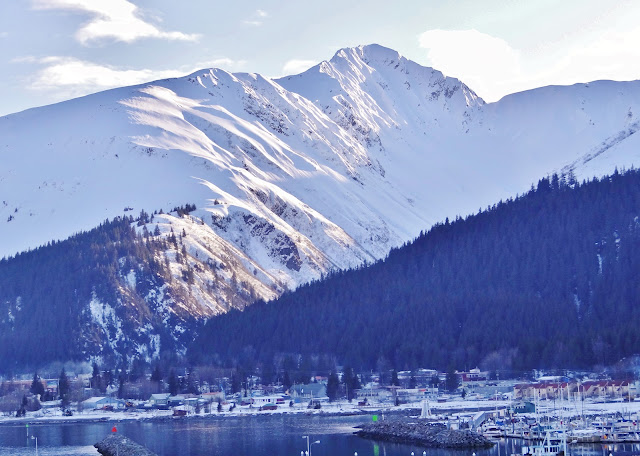