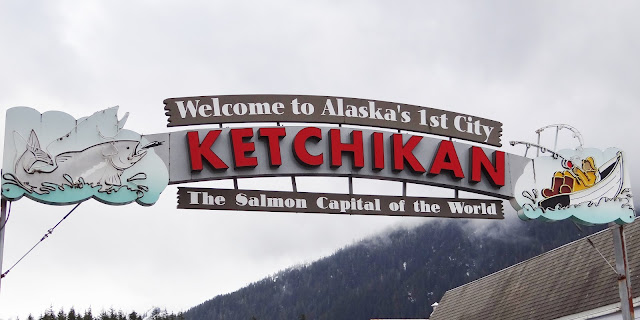 I got up about 8.  We were sailing up the Tongass Narrows toward Ketchikan; & the scenery was beautiful.  Heavily forested mountains with the tops covered with low clouds.  It’s very overcast & in the low 40’s.  Every now & then you would see a lovely cabin along the water’s edge. Occasionally a large flock of birds would fly over.  And there were several pairs of eagles that hung around the dock area all day. 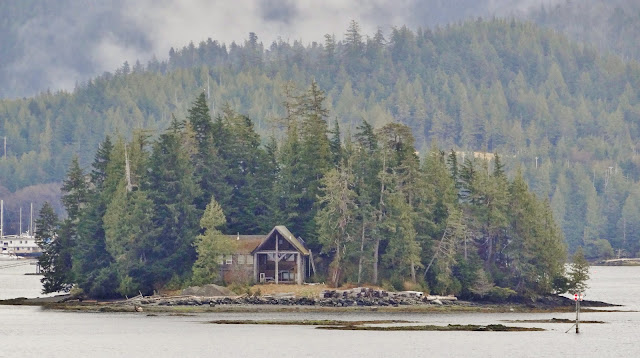 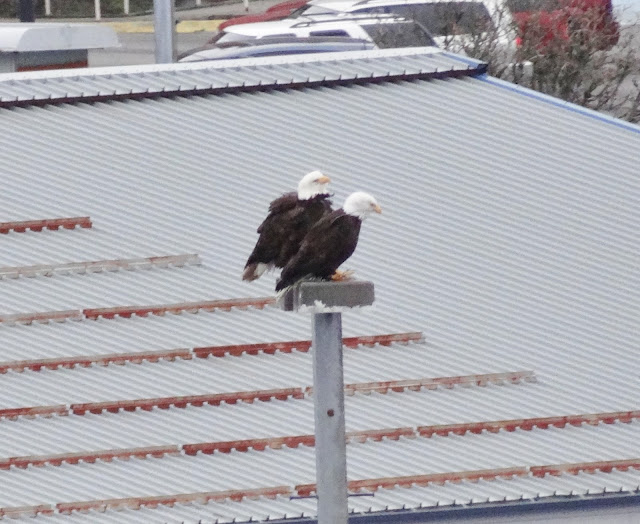 Capt. Glenn didn’t speak until 10 am, when he announced that the ship had been cleared.  His thought for the day....”Always remember you are unique, just like everyone else.”  With the ship docked within steps of town (Pier 3), there was no need to book a tour.  I planned to stay onboard until after lunch in hopes that the sun might come out & get a little bit warmer.  Now that we have the internet back, I also wanted to get some things uploaded. There must have been a lot of folks who opted for the flightseeing tours. Those planes were buzzing like hornets, taking off & landing off our port side. 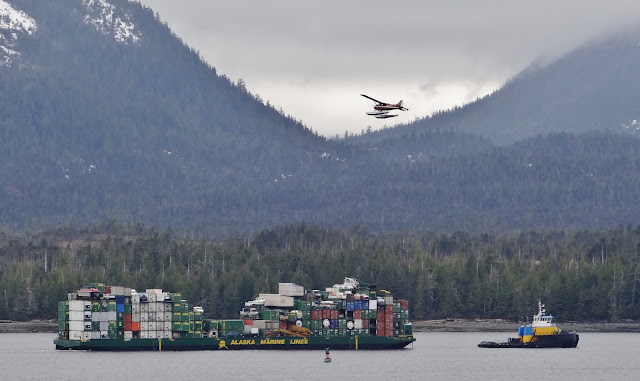 I went ashore about 2; & started walking south on Front St.  The majority of the stores haven’t opened for the season yet.  If the buildings weren’t rustic looking, I would have sworn I was in the Caribbean.  All the ‘chain’ stores are represented; Diamonds Int’l, Tanzanite Int’l, Passman’s Gallery, Del Sol, Effy Jewelers.  My first impression was not so favorable. 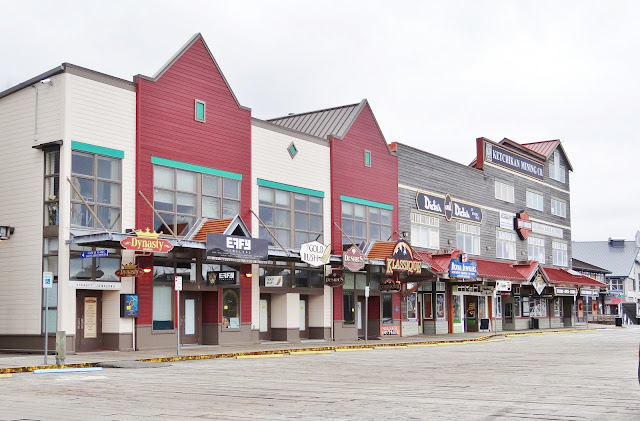 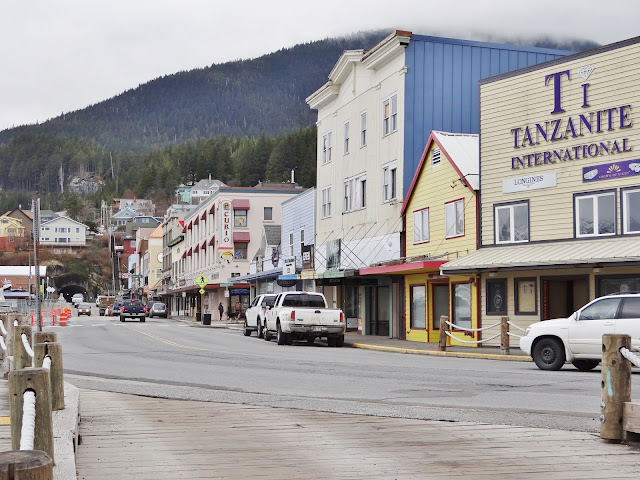 I turned east & walked up Mill St. to the Whale Park.  Naming this a park is a slight stretch of the imagination.  It’s the size of a postage stamp wedged between a commercial parking lot & a main street.  But there is a cute whale theme park bench & the Chief Kyan totem pole. 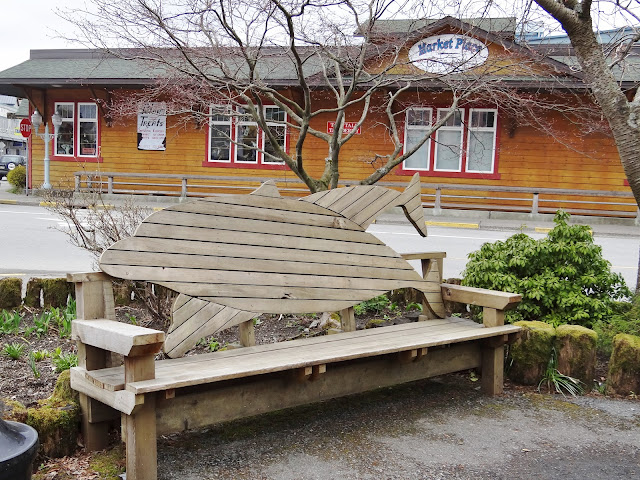 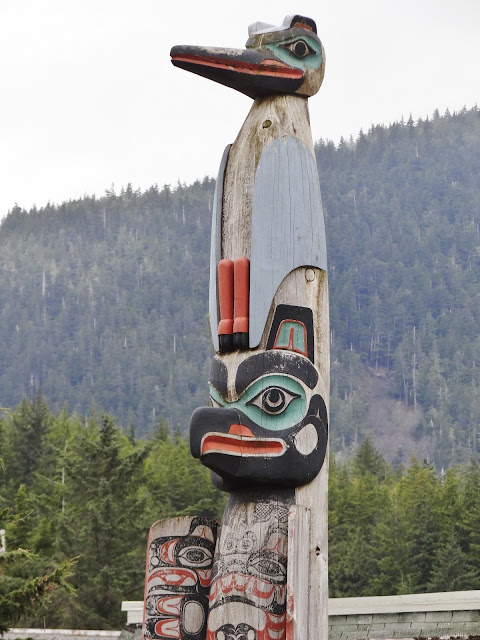 Further up that same street & across a footbridge is Creek St., a charming historic boardwalk area located on the banks of Ketchikan Creek.  It is home to a couple of dozen restaurants, shops & galleries.  It’s probably a real happening place when everything opens up in the summer.  It’s too bad that Creek St. isn’t the first thing you see when you come into town.  It is quaint, colorful; & just plain looks like an Alaskan gold rush town. 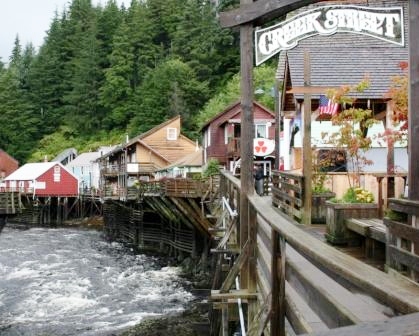 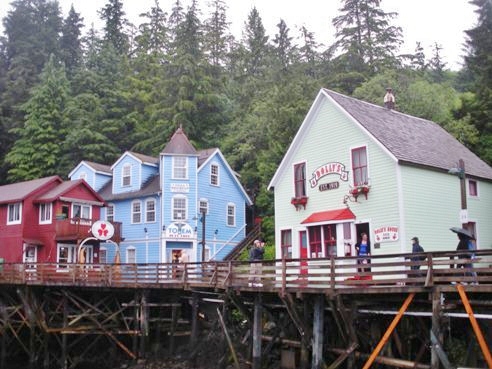 I came back down hill by way of Dock St. & on to Bawden St. to get a closer look at St. John’s Episcopal Church which was built in 1904. 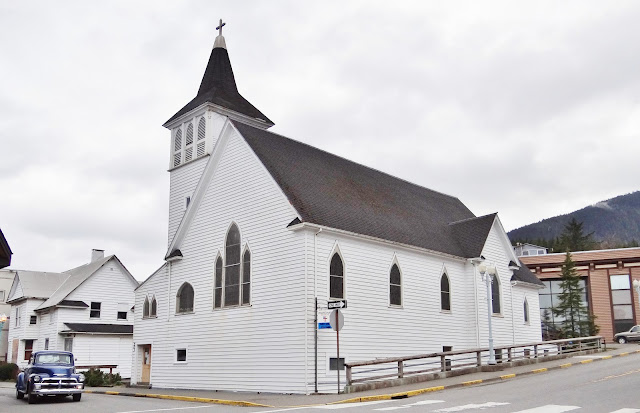 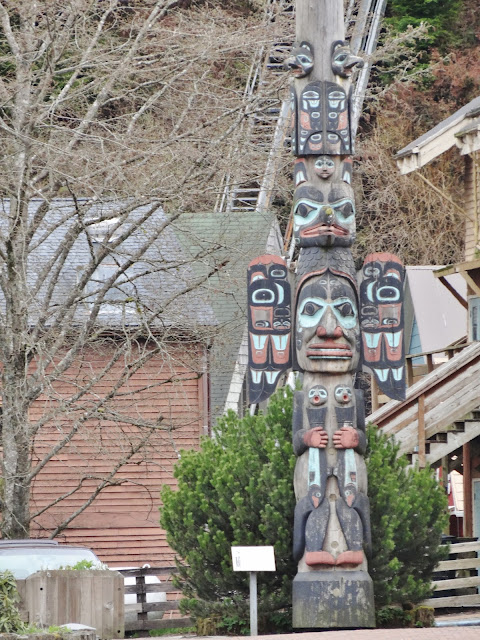 I took a right on Mission St. which has some adorable shops; most notably Ketchi-Candies.  Betty raved about their homemade fudge.  (Now that’s something Crystal hasn’t offered me in 3 months.)  Who can pass up a ‘buy one pound, get a 2nd pound free’ deal?  I tasted lots of flavors; & had fun chatting with the owner & the two young ladies who work there. 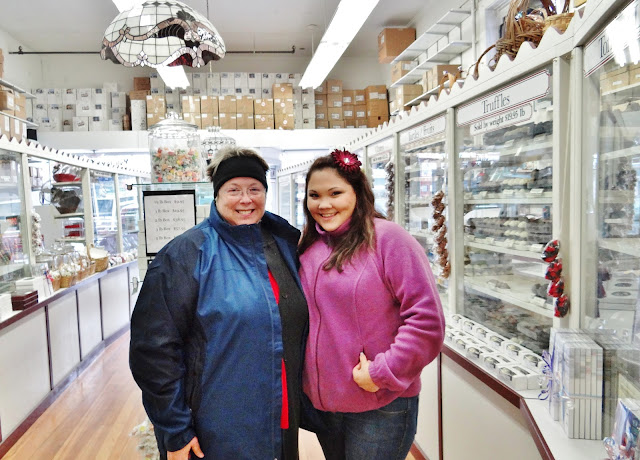 When I got back down to Front St., I sat a little while on a bench in a park area by Pier 2.  There is a new statue there called “The Rock” that depicts the lives of 7 people during the gold rush era.  It’s an interesting piece of work. The cloud shrouded mountains made a beautiful backdrop. I didn’t dwell there very long because it was still cloudy & very chilly. 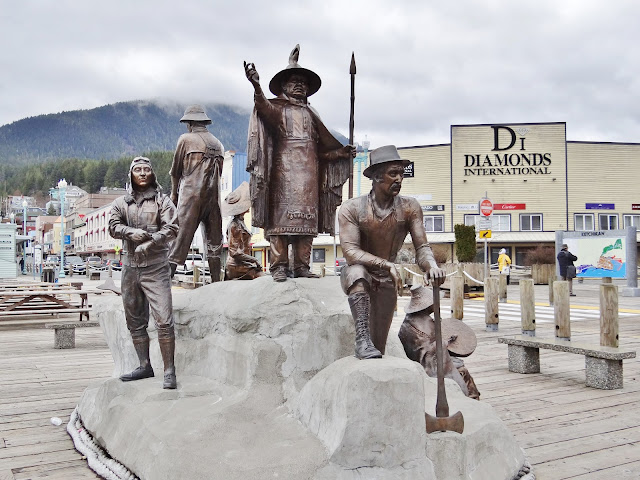 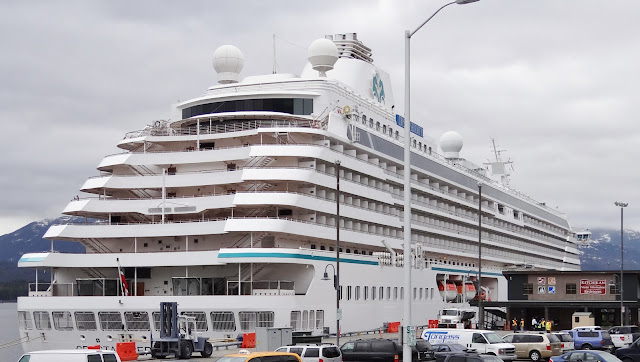 I took a look around the Tongass Trading Company (which you had to walk through to get back to the ship).  Quite a few of the crew were in there doing some shopping.  I pondered over some Deadliest Catch paraphernalia; but passed.  I did find this life size moose named Mortimer amusing.  Notice the t-shirts? 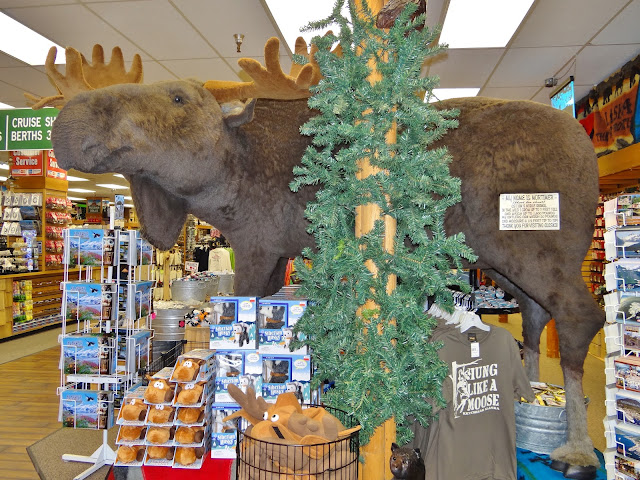 I was back onboard by 4:15.  I stopped by the Bistro; & found Kris & Pat chatting at a table.  Since I didn’t have any breakfast or lunch, I knew I wouldn’t be able to hold out til dinner.   So, I went up to the Trident Grill to get a grilled cheese sandwich to go.  There was much activity going on up there; decorating & dressing the tables for tonight’s final world cruise event around the Neptune Pool.  A stage had been built over the pool; & every vertical surface had the look of a wild west town.  I had a deja vu moment.....back 2 months ago when I took a sneak peek at the preparation for the ‘Pan-Am-Ania’ event that I was not invited to.  Well, tonight, I would have the chance to attend ‘The Gold Rush Saloon’. 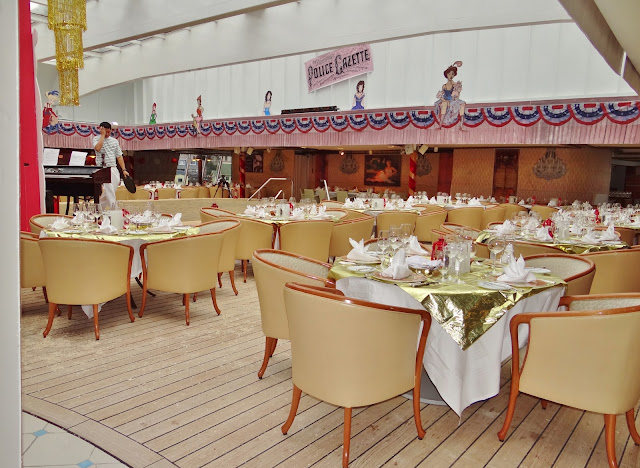 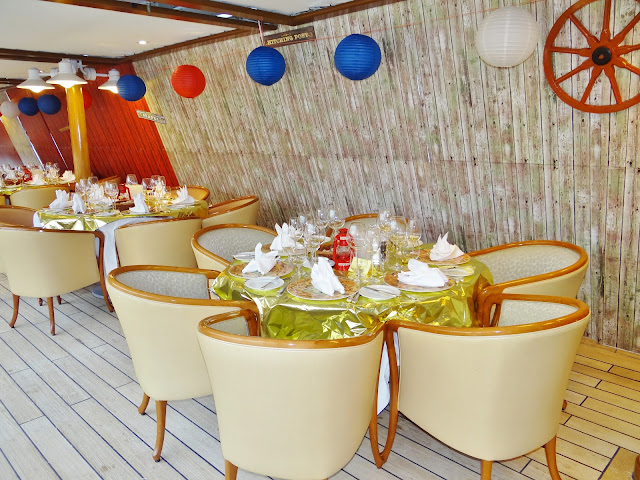 Celeste came by at 5:30 to chat about their day.  We agreed to meet in Palm Court for pre dinner cocktails at 7:45.  The sun finally came out just before we set sail at 6.  It made the bright colors of the buildings really stand out against the dark green trees that covered the mountains behind.  There was a little snow on the higher peaks.  It was really beautiful.  Those seaplanes were still buzzing & the eagles still soaring above the ship as we pulled away from the dock. 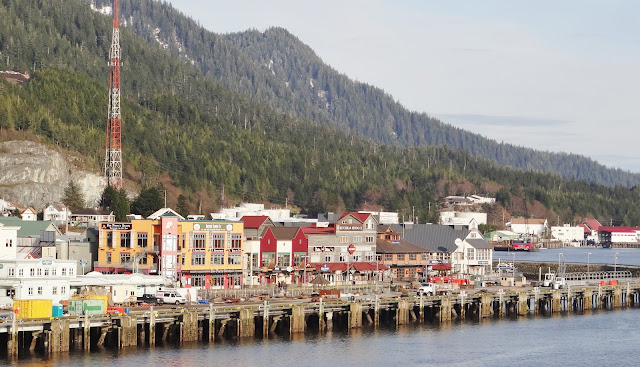 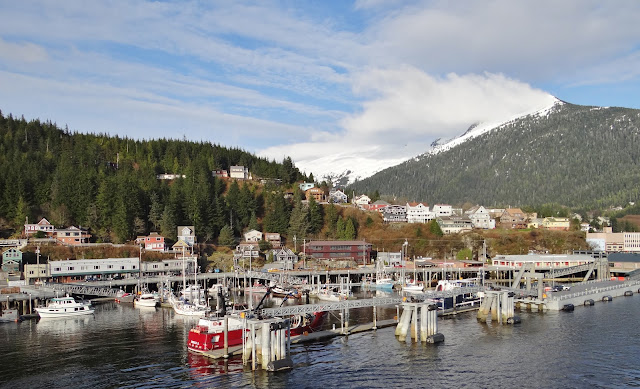 While the WC event was taking place on deck 12, they were serving dinner in an open seating in the main dining room from 6:30 - 9.  There was also two performances by classical pianist, Avner Arad, in the Stardust Club.  That in addition to free cocktails, should have kept the rest of the passengers entertained & in a jovial mood. 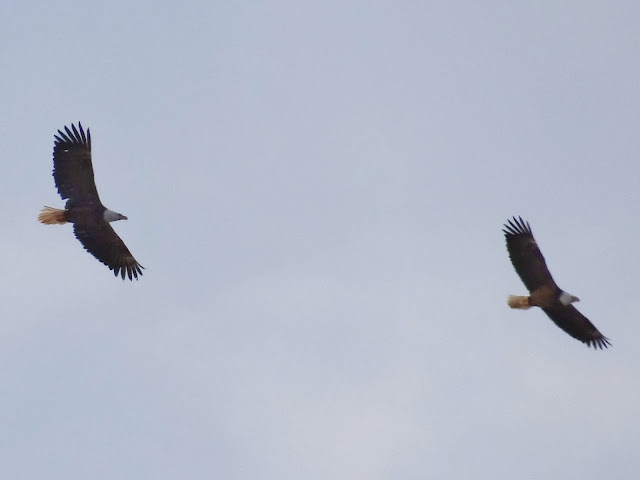 I sat with Celeste & Bill during the cocktail hour.  They danced some before we were escorted to our table.  We were assigned table #20; & we had an ‘escort’ who carried one of those green ShorEx #20 paddles.  Celeste, Bill, Nelda, Sheldon, Don, Jared & I shared the table.  I had not been introduced to the other four prior to this evening.  But we had a lot of fun. 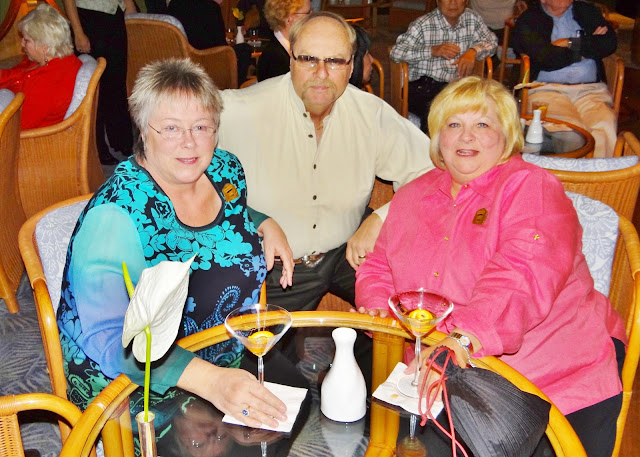 There was a set menu consisting of four courses that were served in between sets.  The starter was a fried fish nugget, baked stuffed chicken wing & battered onion ring that came with tangy apple-cabbage slaw & two sauces. This was followed by Alaskan king crab soup.  The entree was a duet of fillet mignon topped with a lobster claw & BBQ sauce & veal tenderloin stuffed with lobster salad.  They were served with twice baked stuffed red skin potatoes & slow roasted vegetables.  For dessert we were served white chocolate cheesecake topped with a peanut butter swirl & a fudge brownie ice parfait. 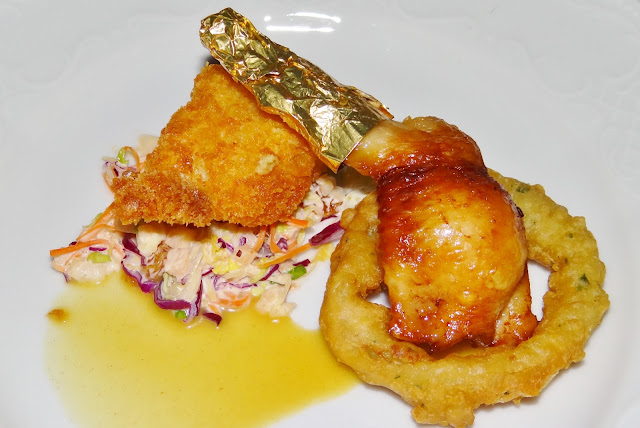 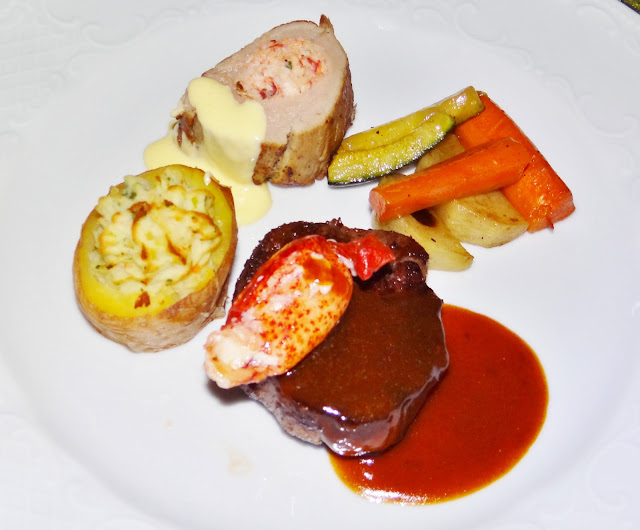 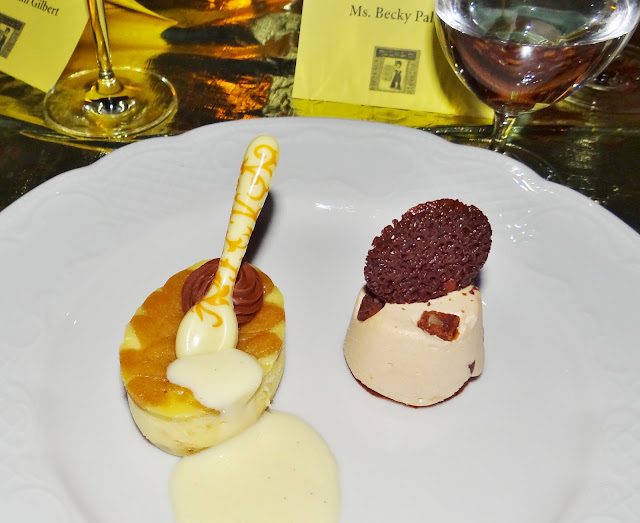 The meal, although aesthetically pleasing; was nothing to write home about. My veal & potato were on the dry side.  The soup had an unusually ‘fishy’ taste to it.  The appetizer was the better of the four courses.  The desserts were pretty good.  I had looked at tonight’s regular dining room menu; & I personally thought it sounded more appealing. 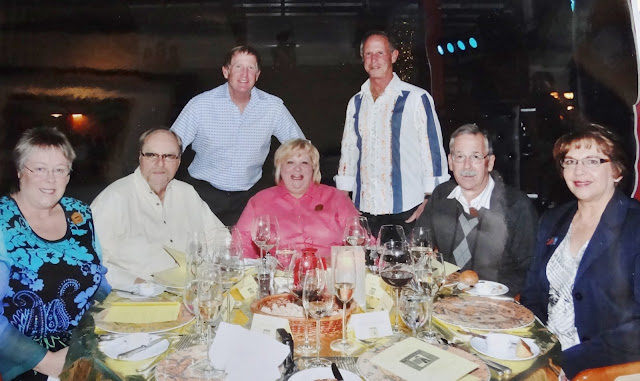 The evening’s entertainment was very well done.  The Galaxy Orchestra & Colin Salter did an outstanding job.  Curtis & Beverly, the Crystal singers & dancers, with help from Elise performed their well choreographed numbers flawlessly.  I am not a big fan of that type of old time barroom musical entertainment; but I applaud them for an evening that most everyone seemed to enjoy.  A lot of work went into the staging & decor for this evening.  I felt sorry for the Lido crew who would have to clean up that sawdust on the floor. 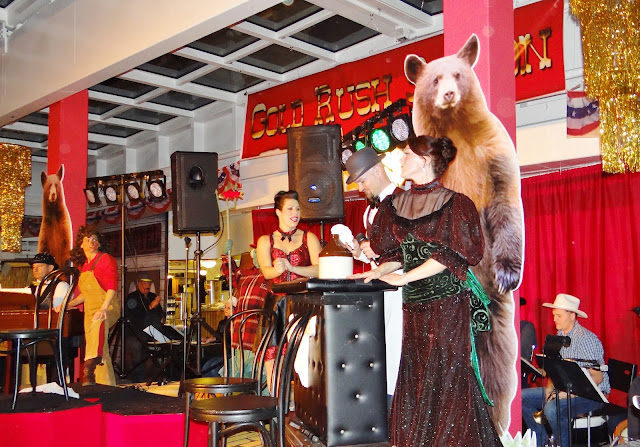 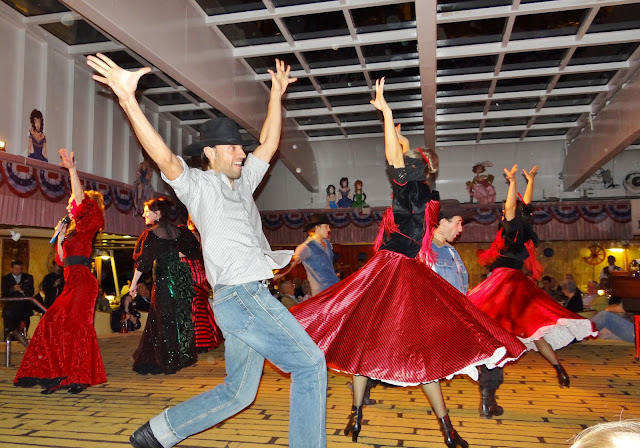 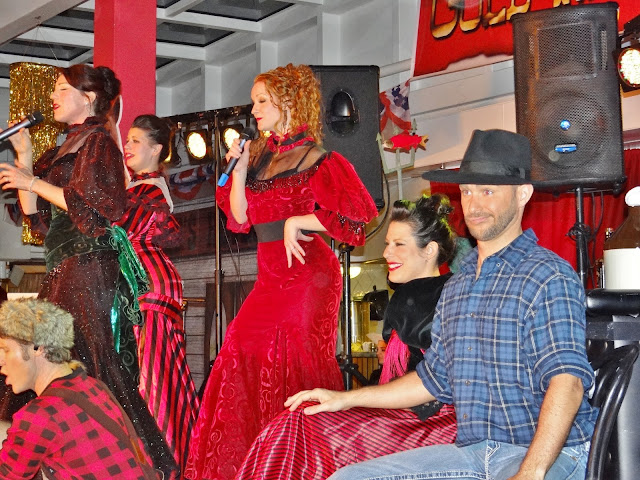 The party broke up just before 11; & we all went our respective ways.  On my way out, I was trying to gather up any leftover $1million dollar bills that had been used as table decorations.  Cash value........probably 1/1,000% of a cent on the dollar.  But it’s never too early to start my 2015 WC fund. Sadly, this cruise is coming to an end even sooner....we have to run our clocks forward another hour tonight. 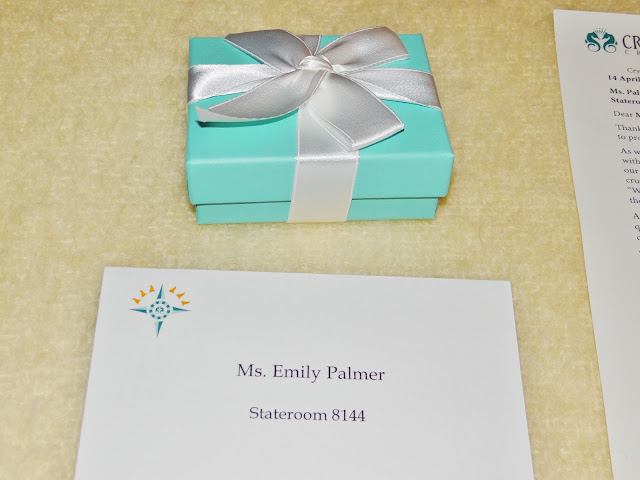