I was unable to get to sleep for a long while last night.  Since I had been waiting for some 'wave action', I laid in bed; & savored the rocking.  There is no more comforting feeling in the world to me.  If every day of this cruise had been like yesterday.......I would be healed! 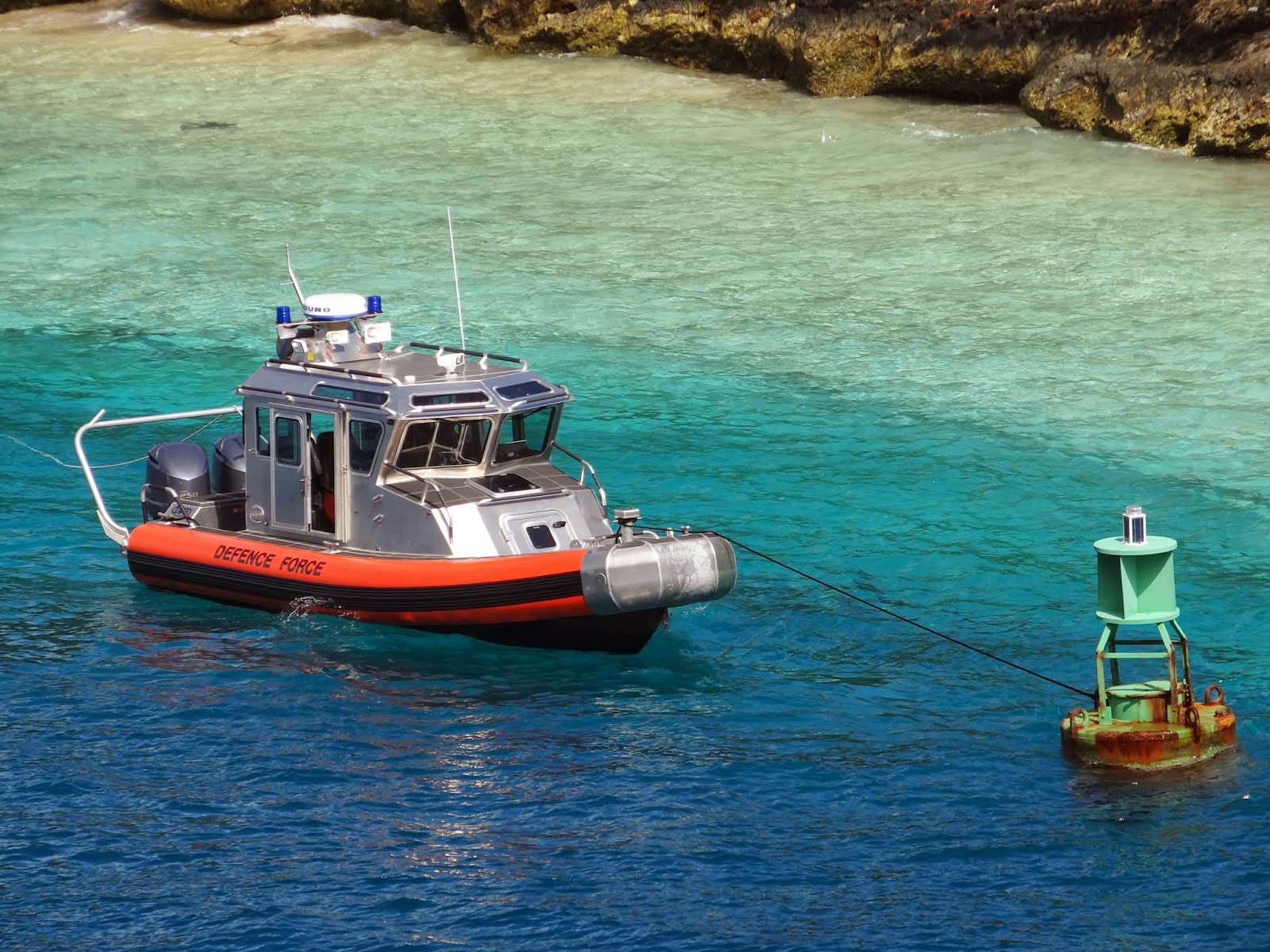 I was so cozy when the C.D. sang this morning, I barely acknowledged the intrusion.  But I REALLY wanted cappuccino.  I threw on the muumuu; & rushed out w/o even looking in the mirror (bad omen).  Lou was in the Lounge; she'd had a fitful night.  A few people came & went.  Everyone seemed to be in a rrush; having big plans for our arrival in Nassau.  A while later 2 very nice looking men in crisp,white uniforms came in; asked how we were enjoying our cruise.  Lou & I just started joking about noise; & how we were probably too old for this big ship.  We were still rather bleary eyed; & didn't realize that we were talking to the Hotel Dir. & his Asst. 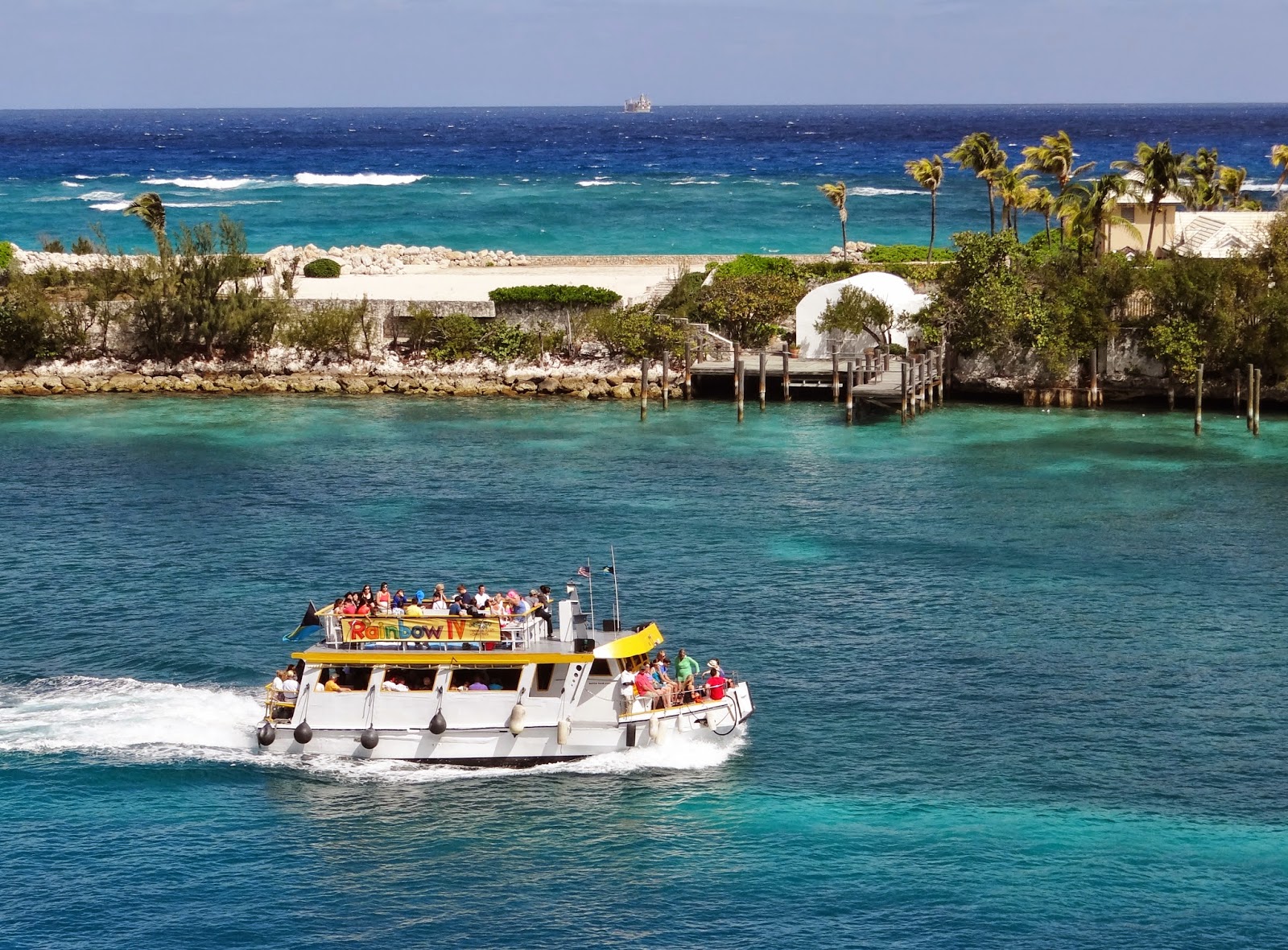 We admitted that we were Holland America/Crystal Cruises fans.  They seemed generally interested in hearing our thoughts (as old people).  Lou  mentioned not being able to get the Pepsi machine in the arcade to work.  I mentioned the vending machine in the upper level of the Lounge only offering water & Gatorade.  They agreed that would make sense if this were the gym.  I figured this sgl. crowd was more the cola; & red bull type.  I mentioned that it was strange to have tea bags & hot cocoa packets, but apparently no hot water in the lounge.  They both went over; & scrutinized the machinery.  After touching a few buttons, they found one that dispensed hot water.  Voila!  We also made some other suggestions; they made notes; & gave each of us their business cards.  We were amused & impressed. 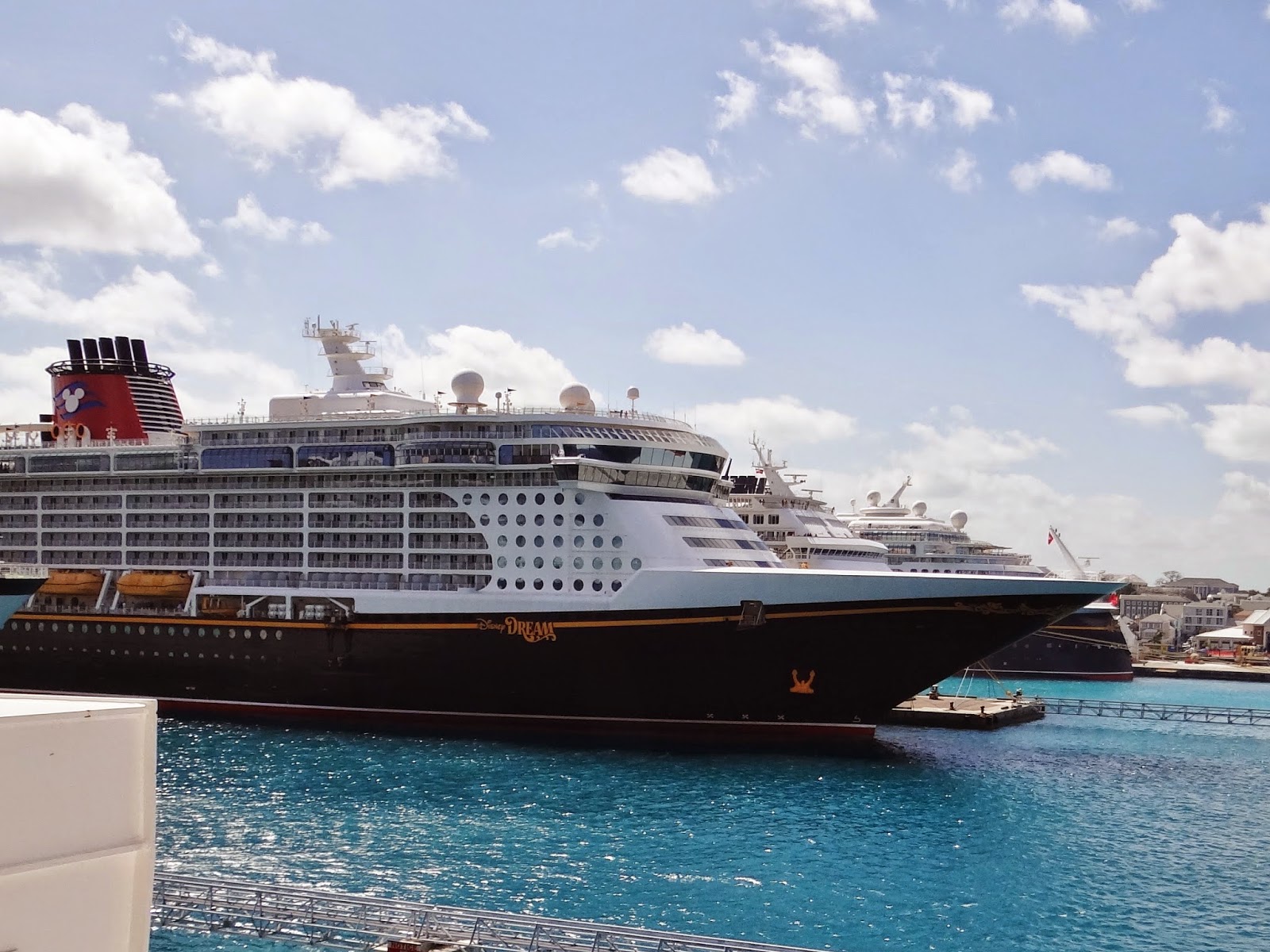 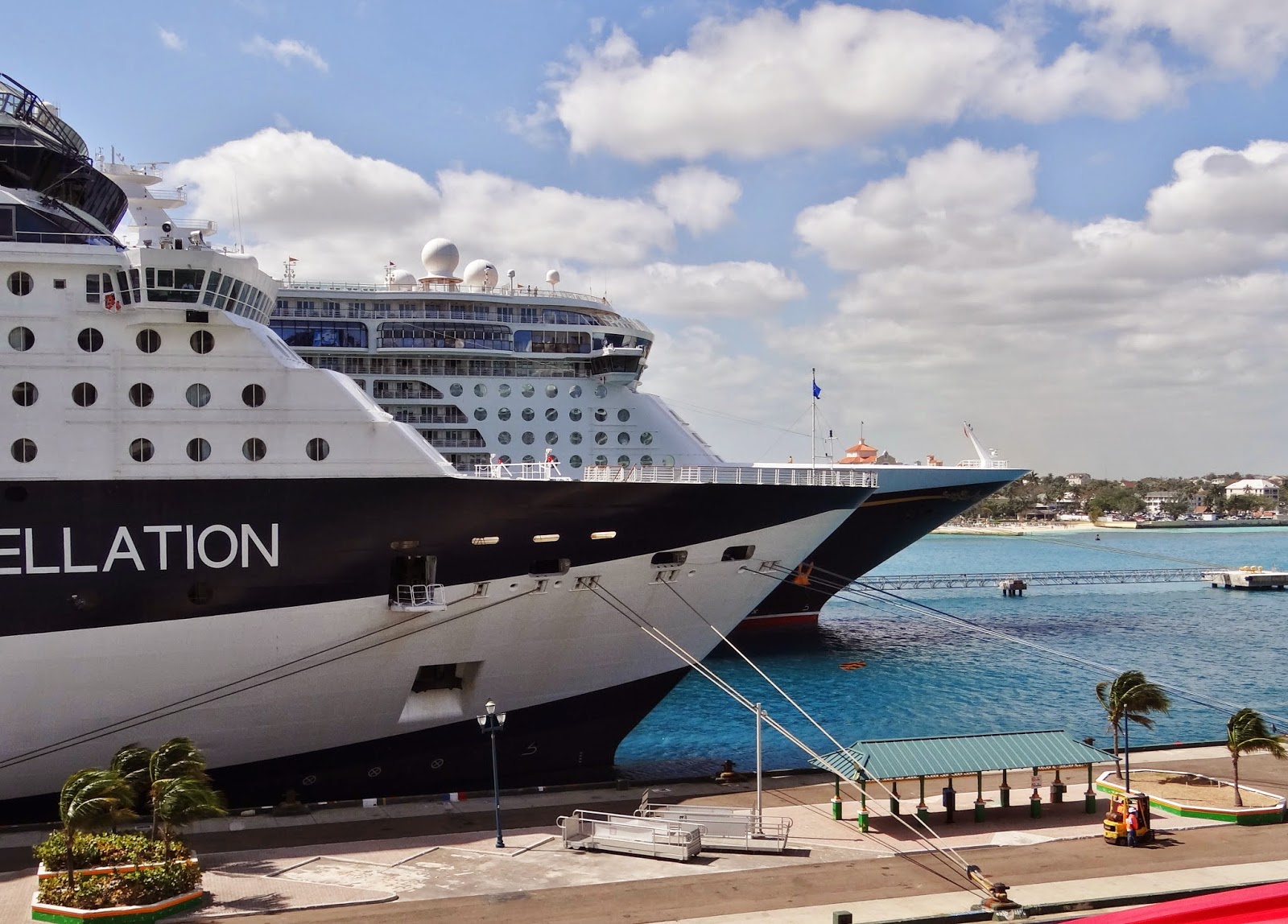 I went back, put on some clothes; went out on deck to take photos of the sail in.  Six mega ships in port at the same time......you couldn't pay me enough money to go out in this.  Obviously last night's weather brought a cold front through.  I found a quiet spot on the shady side of the waterfront to read; & I actually got a little chilly.  Lou texted about 12:45 saying she was ready for lunch.  I met her in the Garden Cafe.  I tried a little gumbo, curly fries, beet salad, ham & orzo salad, stuffed zucchini.  When I got back to my cabin, there were 2 diet Pepsis & a red bull (compliments of the H.D.).  Right away Lou texted that she found the same in hers.  After a rough start, NCL is slowly redeeming themselves in our eyes. 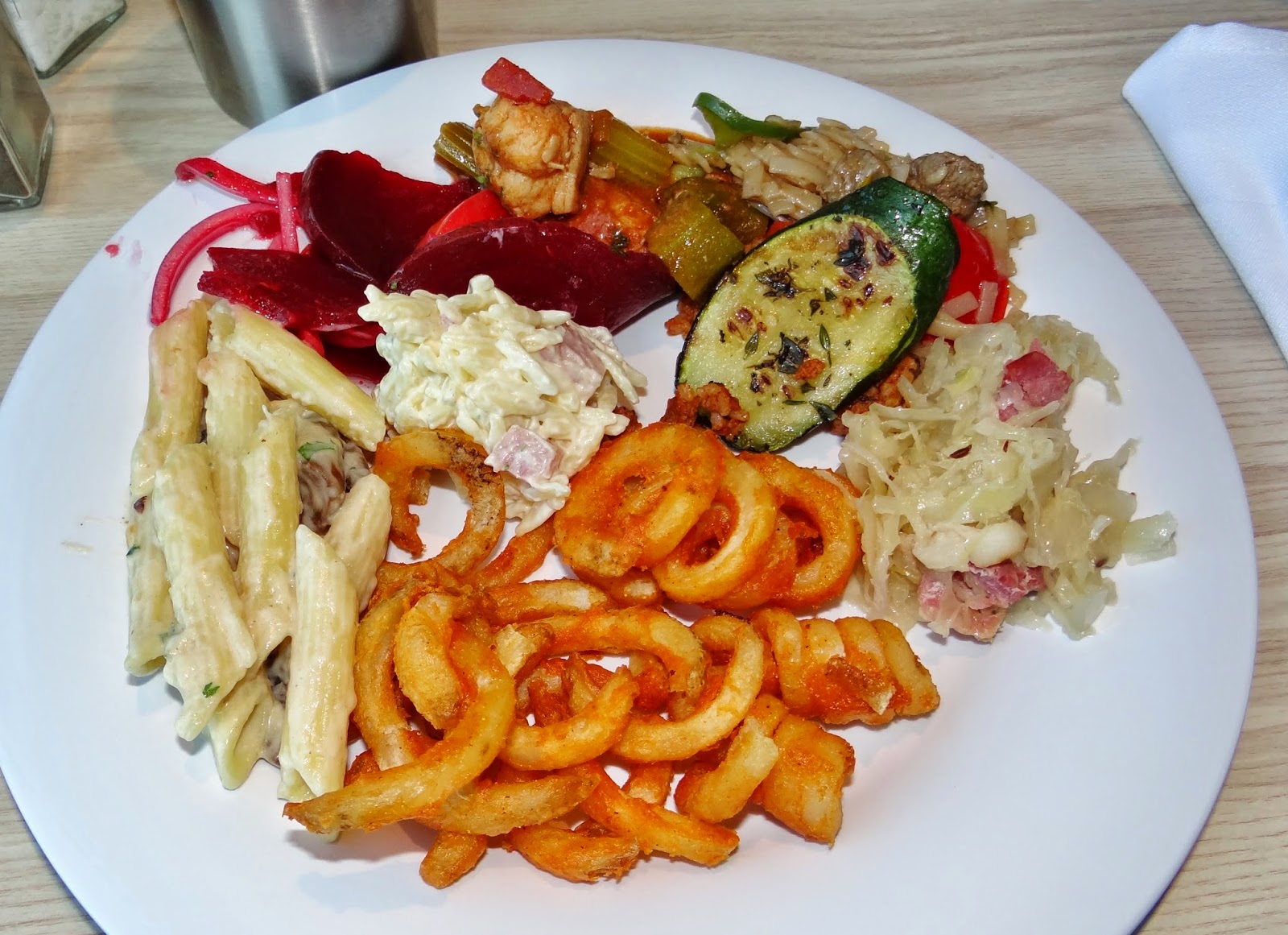 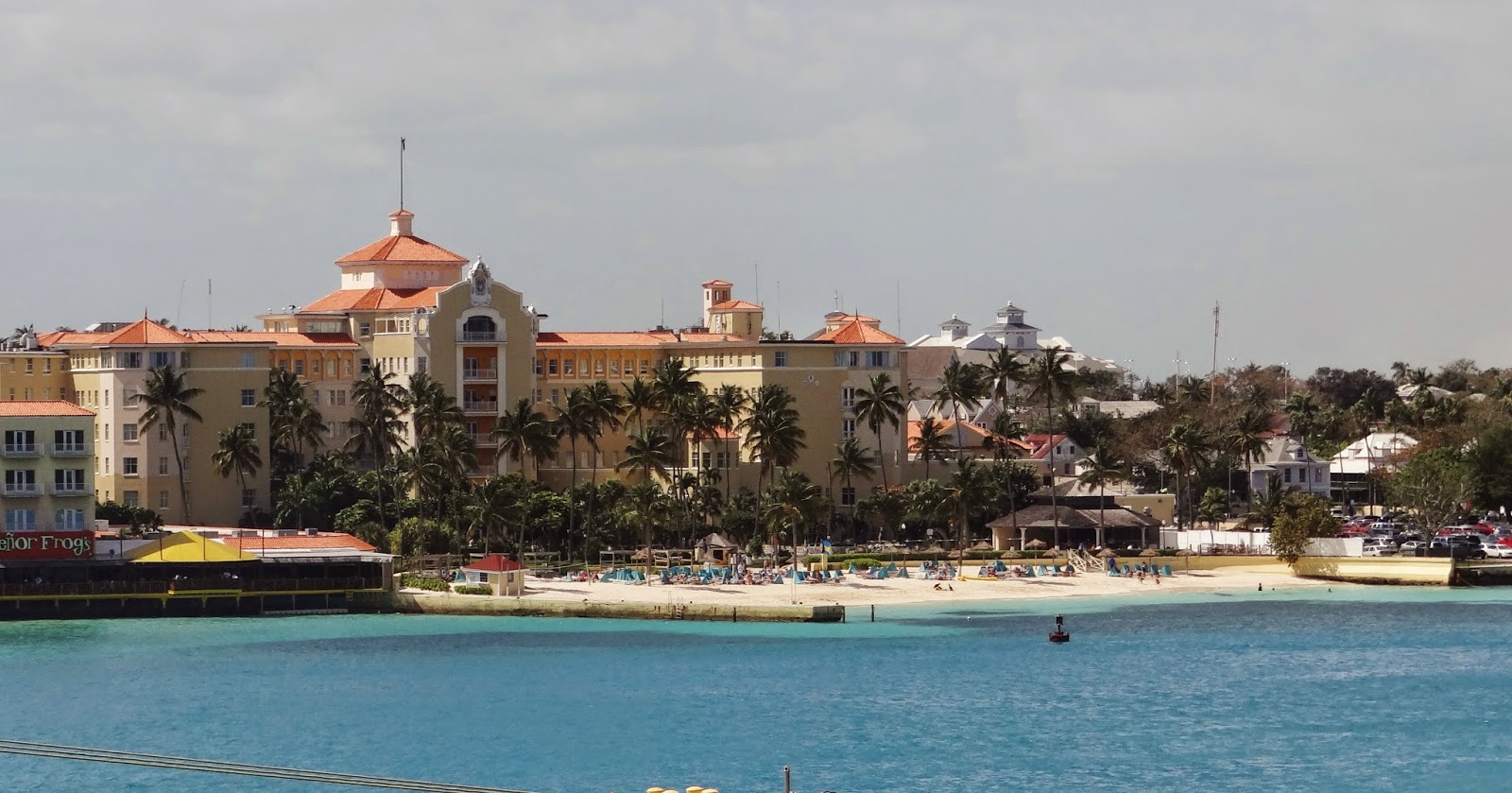 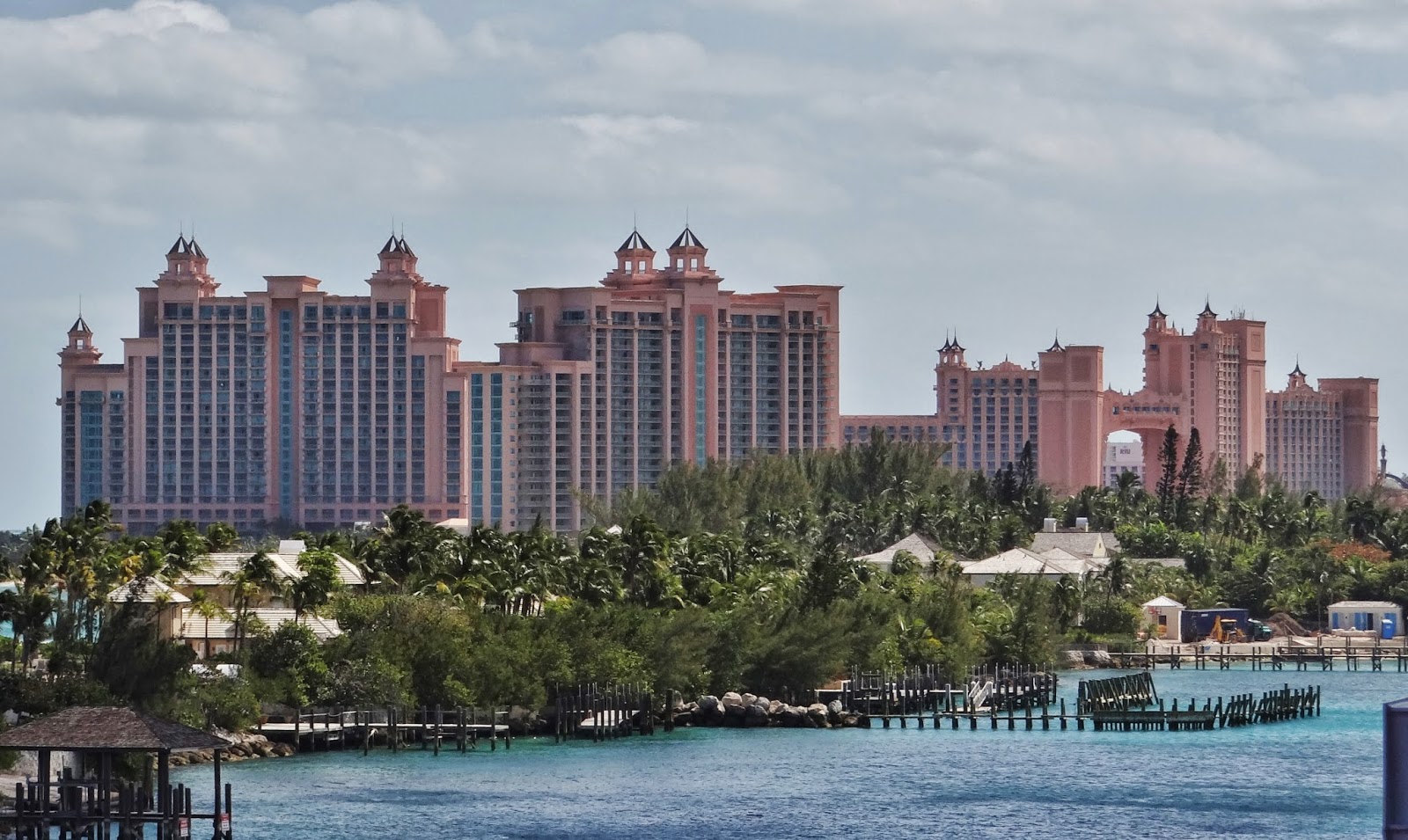 I put jammies back on; & crawled in the bed to read; but I ended up falling asleep.  I woke when I heard the ship's horn announcing our pending departure at 7:15.  There were some stragglers, so we left a little late.  I had the TV turned on to the bridge camera station; & I watched the ship make a 180* pinpoint turn in the tight basin.  We were the last ship in; & the first one out.  Lou texted  right afterward to say she was going up to the Cafe.  I dressed; & joined her for our "last supper". 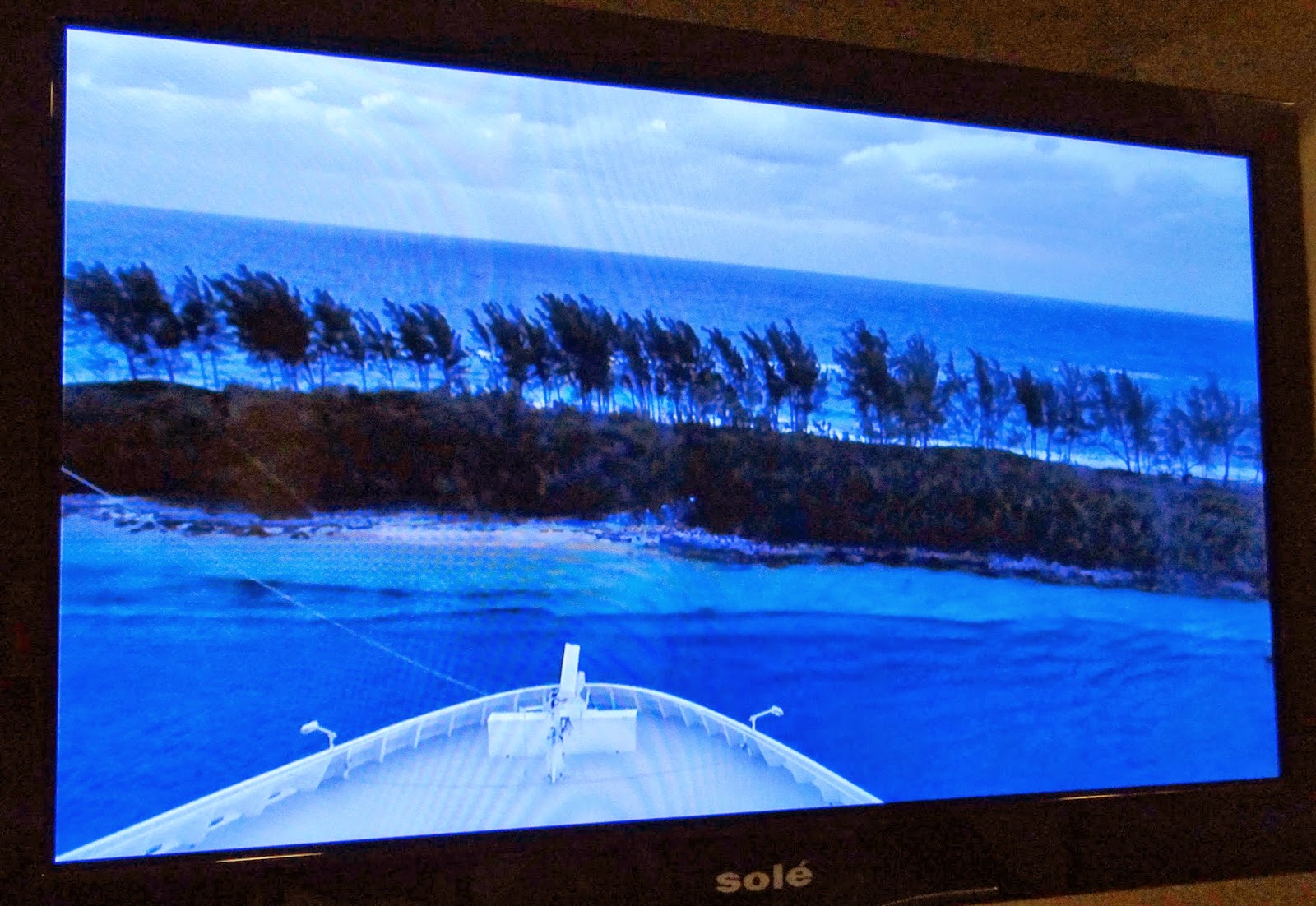 Nothing on the buffet really stood out; & I picked at a few things.  A couple of cold salads were okay.  Stir fry beef & snow peas over rice from the Asian section, a pretty decent chili rellenos casserole.  I though I'd give the pizza a try.  They had chorizo & jalapeño; & it was to die for.  I mean REALLY, REALLY good.  Keep that in mind for next time.  We stopped by the lounge for a snack; & then said our goodbyes. 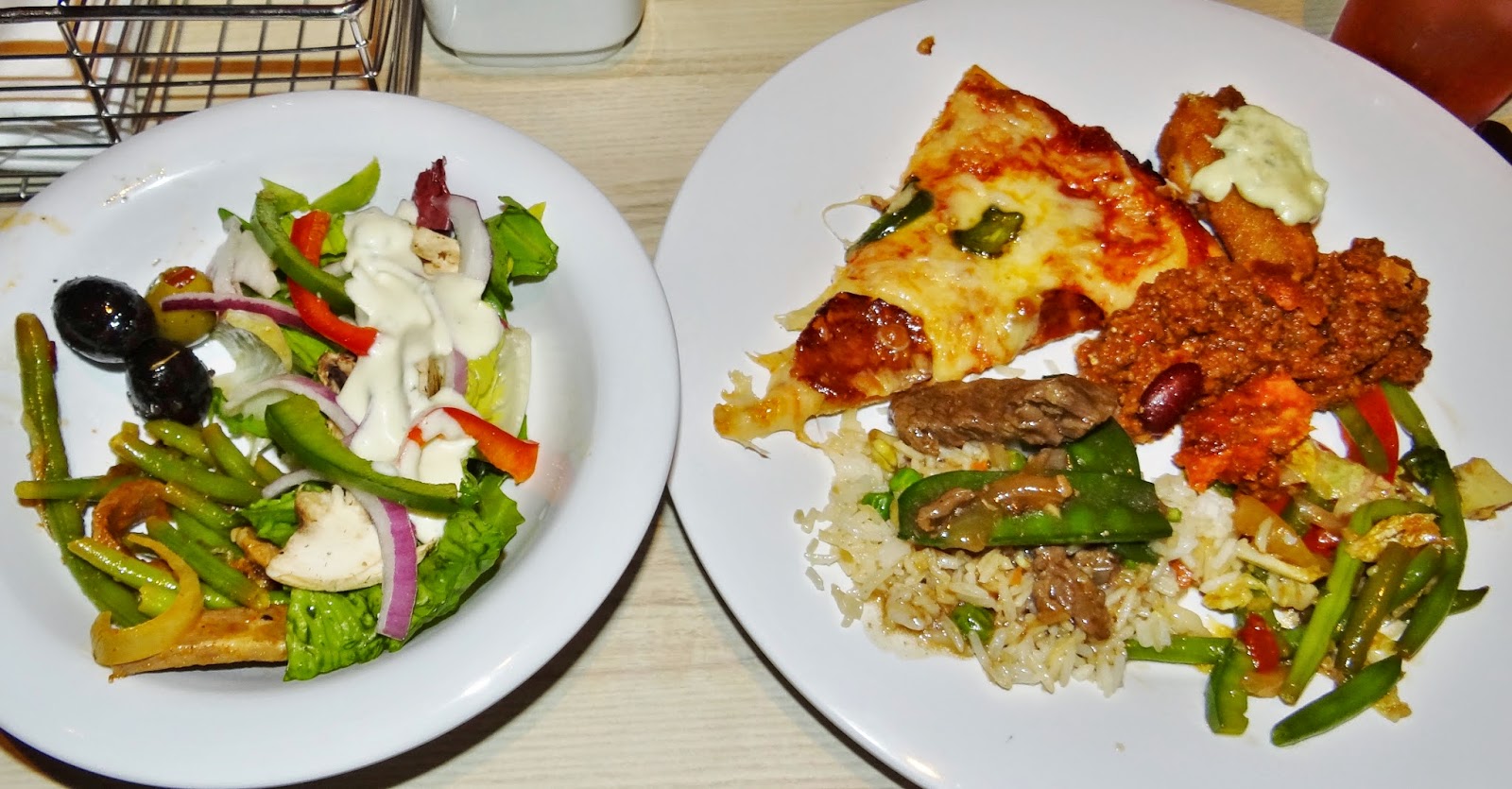 Even though the first half of the cruise was a little disappointing, I am sad to see it come to an end.  Sad to have to say goodbye to Lou.  It was a joy to have her company.  When I went back to my cabin, I noticed that Jerome failed to bring the required custom & immigration forms.  I suppose he opened the door, saw the disaster area; & ran out.  With the luggage strewn all over the bed, there was no way to do a proper turndown service.  A quick call to housekeeping; & they brought everything I needed for disembarkation in the morning.  Got my luggage out well before the 11 pm deadline.  Filled out all the forms; & settled in for one last sleep in this delightful bed 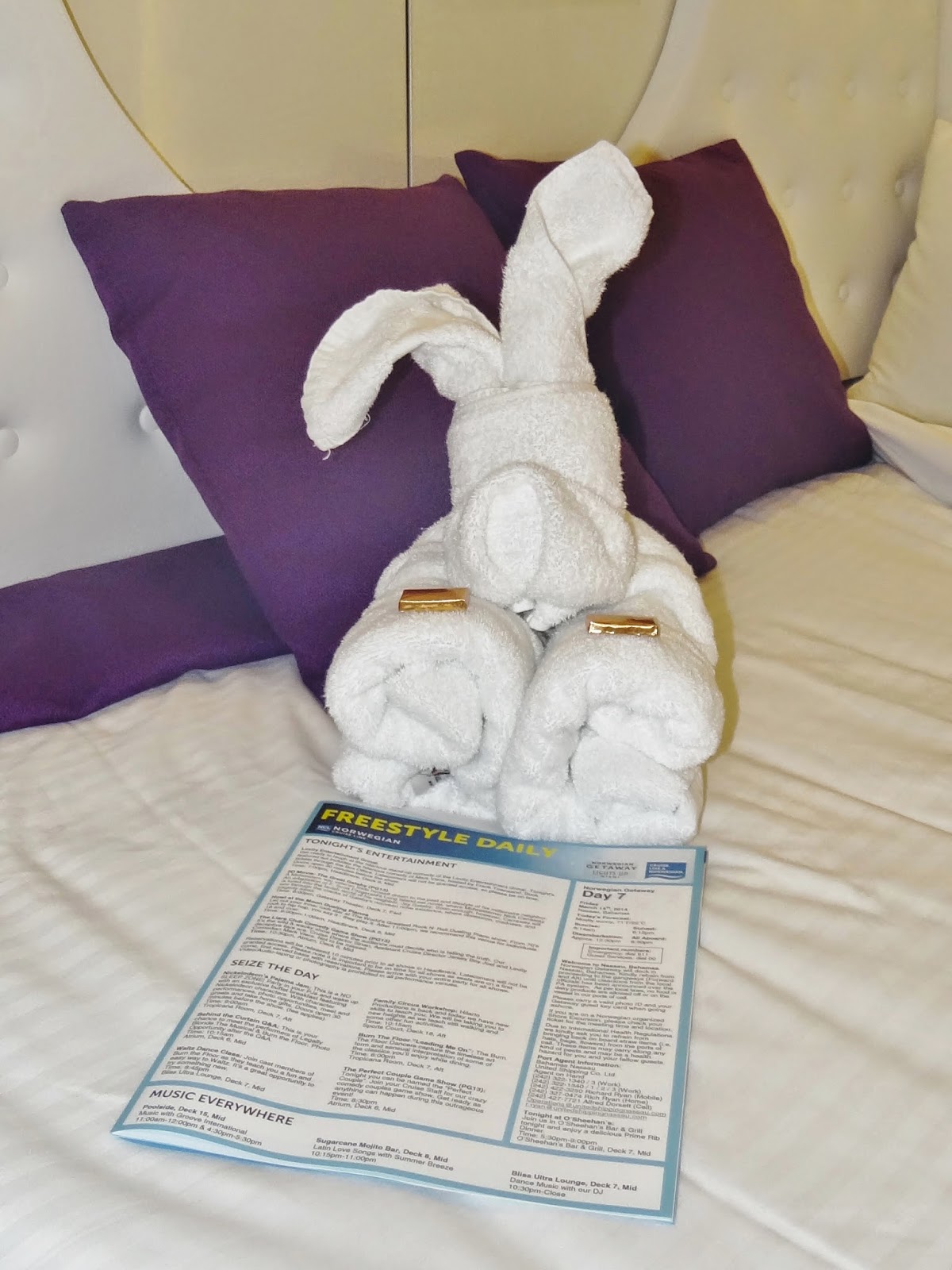