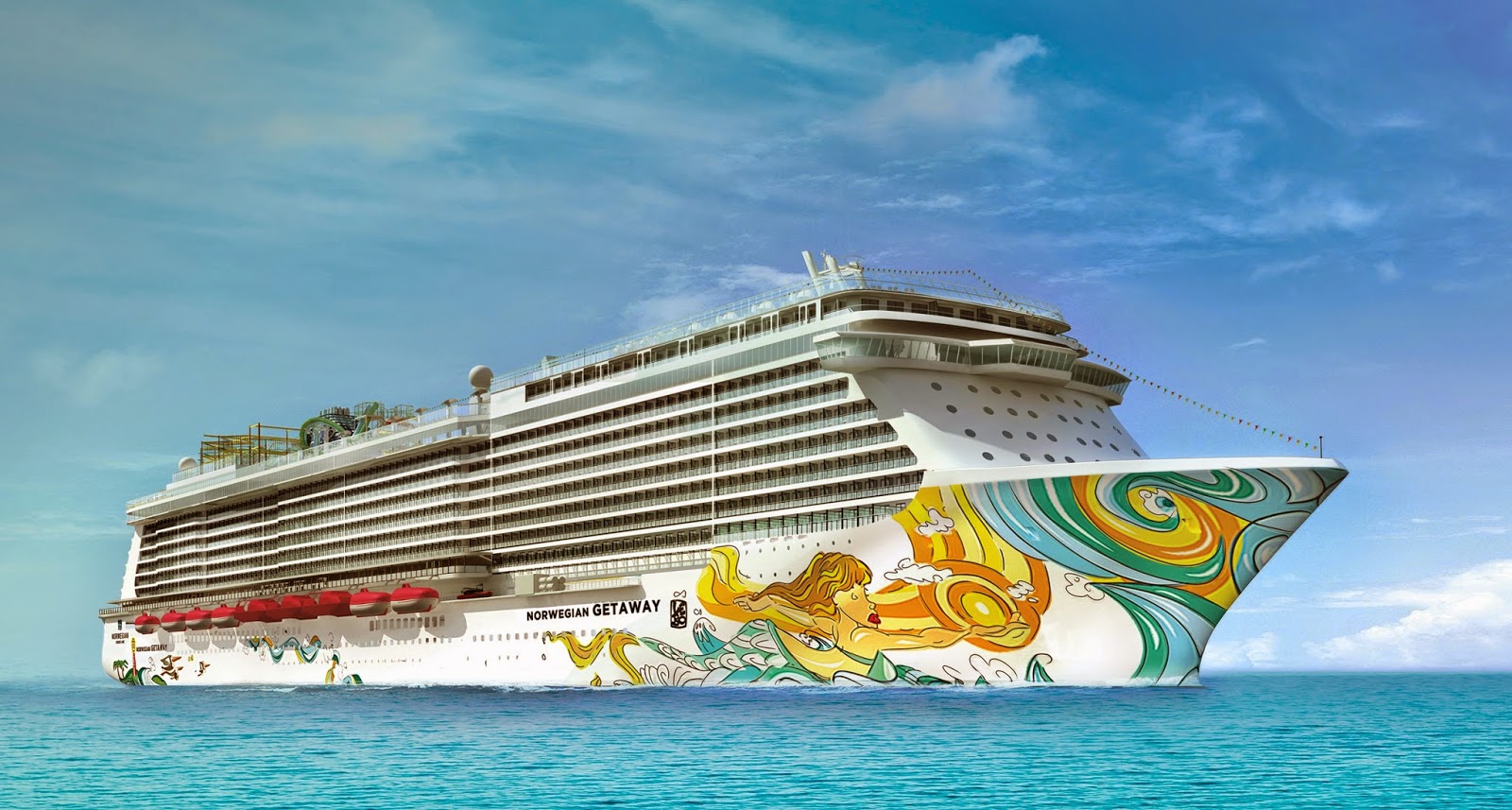 Despite my excitement, I slept surprisingly well.  My friends (Barbara & Tom) picked me up at 8:20.  I was told the Cruise Connection bus was coming at 9:15;  but it actually turned out to be 9:30.  It looked like a brand new bus; very plush, with a congenial driver & friendly fellow Pax.  Our first stop was Port Everglades, which was unrecognizable with all the construction going on.  There were 4 mega-ships embarking Pax today.  About 2/3 of the Pax got off in FLL.  One elderly woman got off at the wrong ship, after having the driver dig through all the bags to find hers.  We had just started to pull away when she realized her mistake; & she flagged him down.  He had to back the bus up, reload her luggage; & do it all over again. 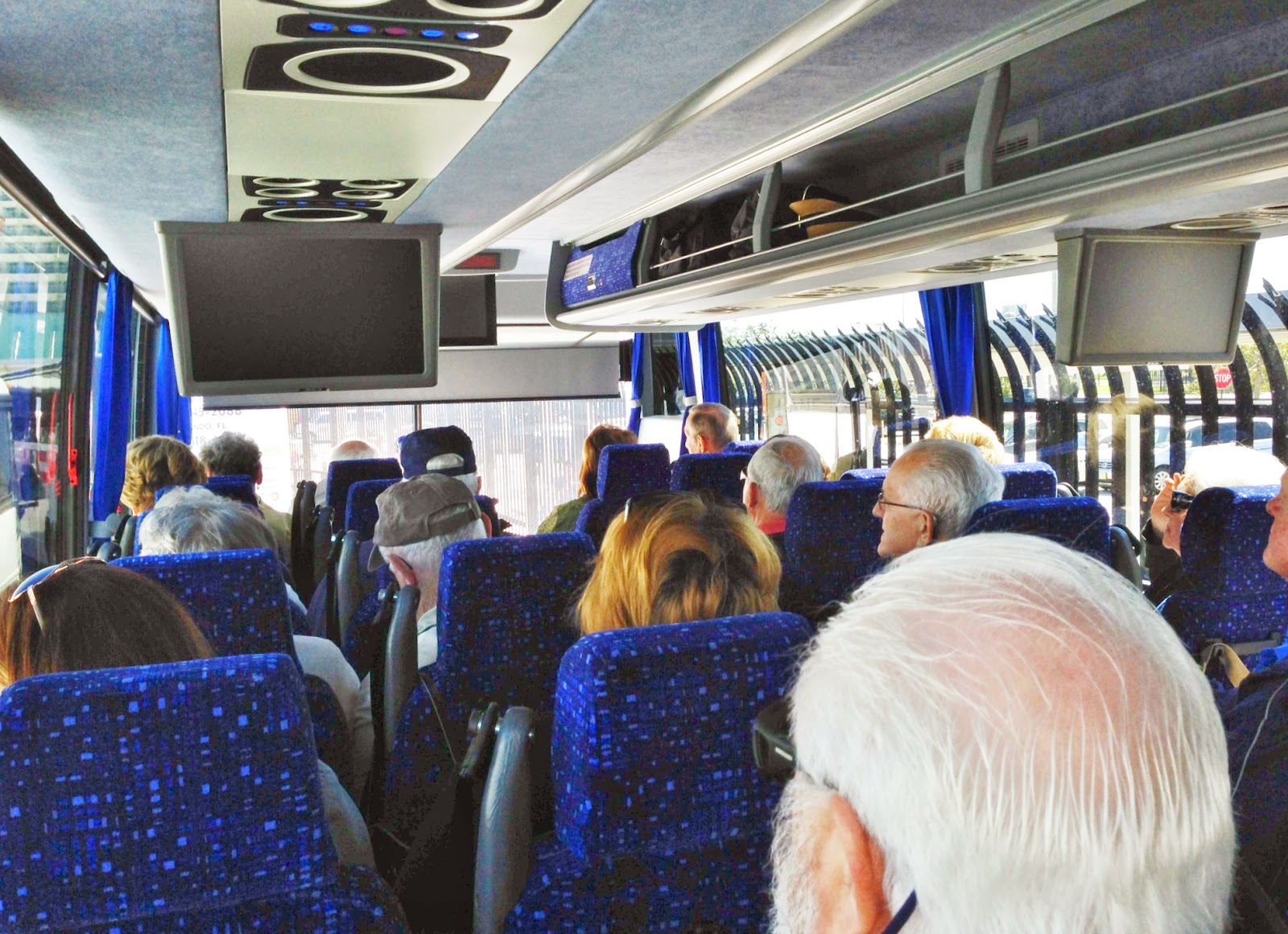 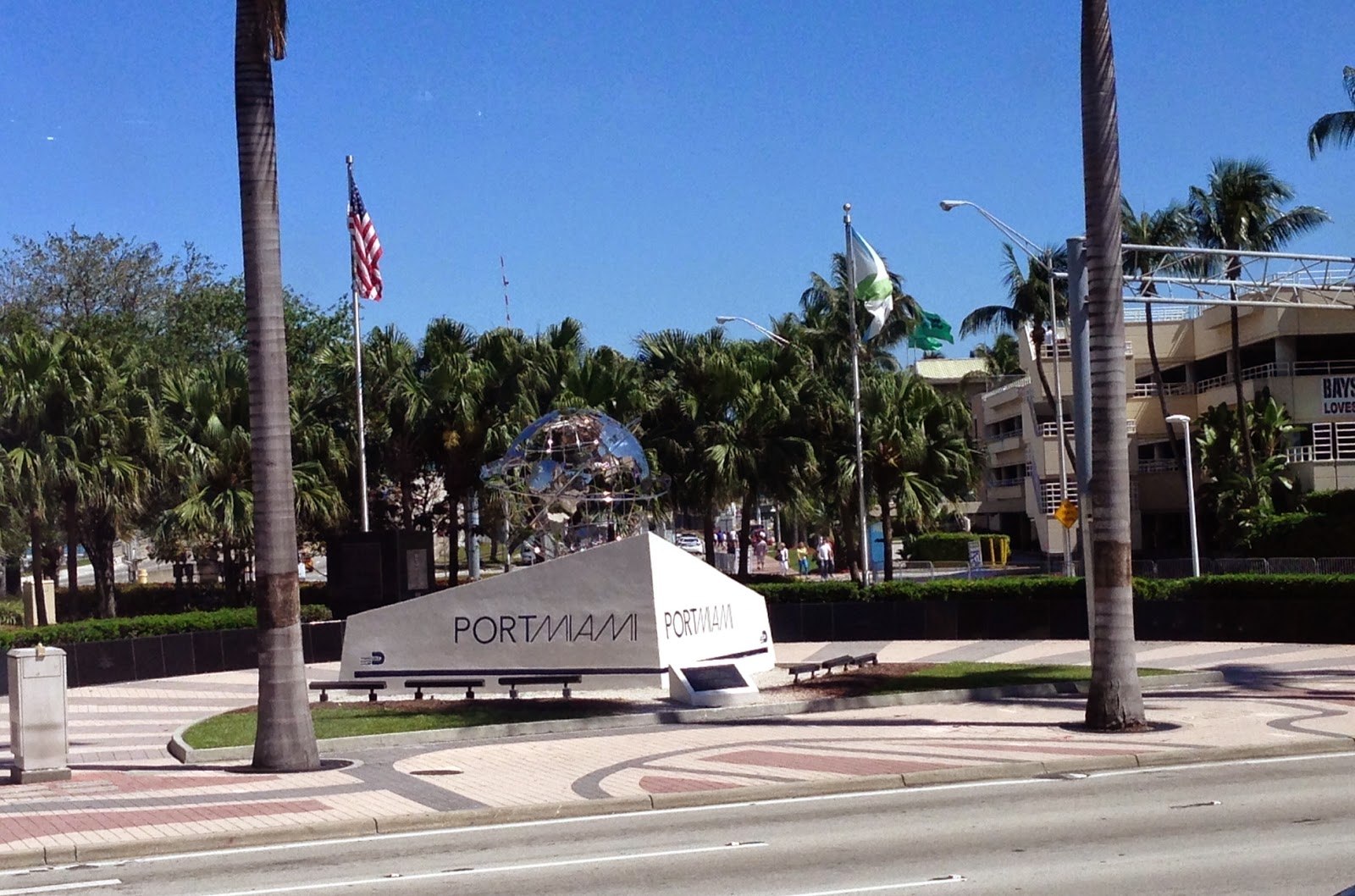 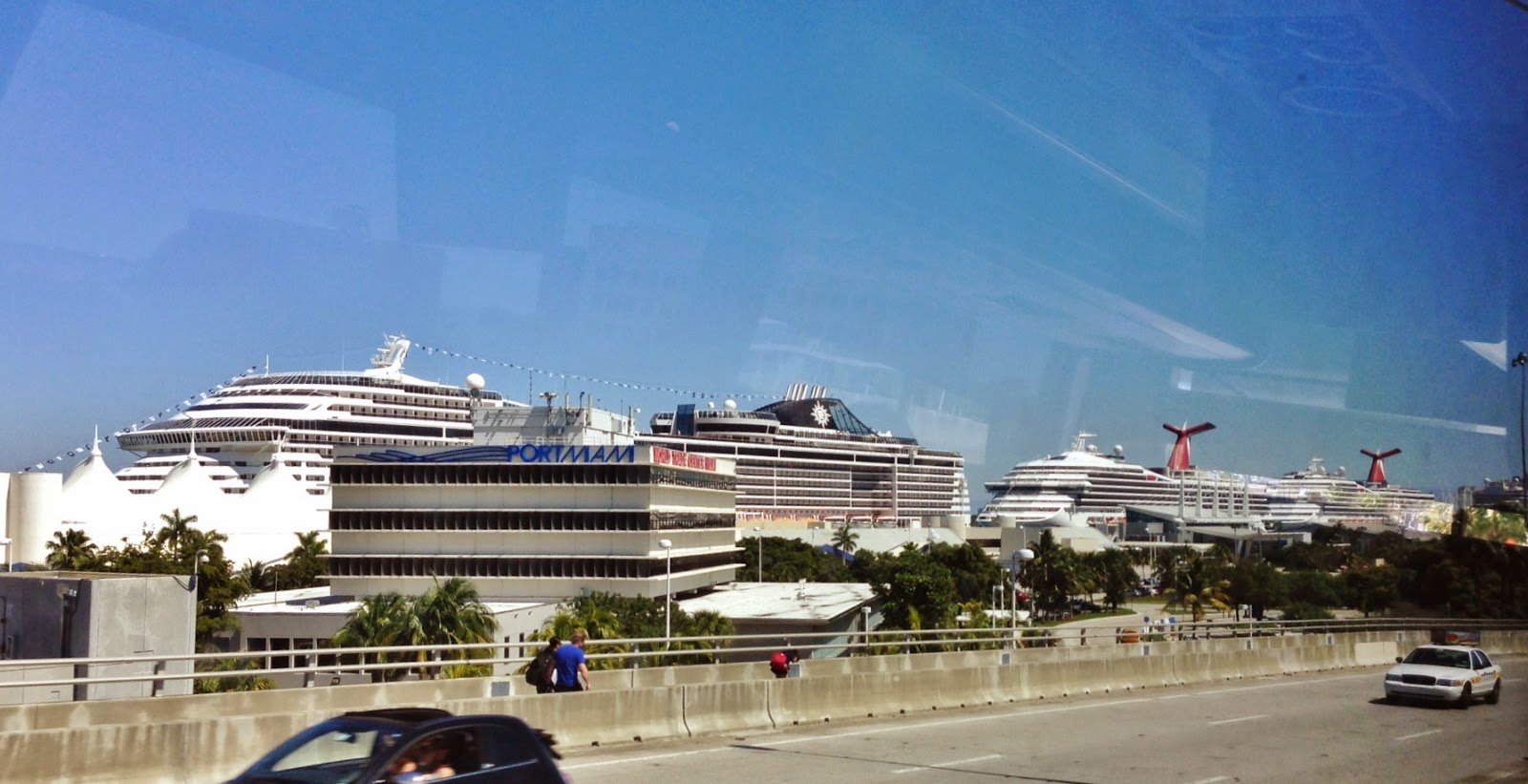 Also a busy day at the Port of MIA with 7 ships in port.  Some major road work taking place on Dodge Island.  The driver had to make 3 passes to find the right lane to drop me off at Terminal B.  It was like we were stuck in a labyrinth; & kept running into barricade after barricade.  Yet the driver kept his cool. Security lady ticked me off right away when she confiscated my empty water bottle & a few pkgs of peanut butter crackers  from my carry on bag.  No liquid; food was sealed; what was her problem?  (Maybe I should have just put them in my big bag & eaten the crumbs later.)  Got onboard; went right to O'Sheehan's Pub for a quick lunch (a delicious corned beef on rye & skinny fries). Texted Lou (who arrived earlier); & she came down to visit while I ate.  It's so good to see her again; still the same ole'  Lou.  We  met on a HAL Antarctic cruise 3 yrs ago.  Despite the fact that she intimidates me w/ her brilliant mind (she's a tenured college professor), she & I relate well on other levels.  We've always enjoyed each other's company even while we sit quietly & read. 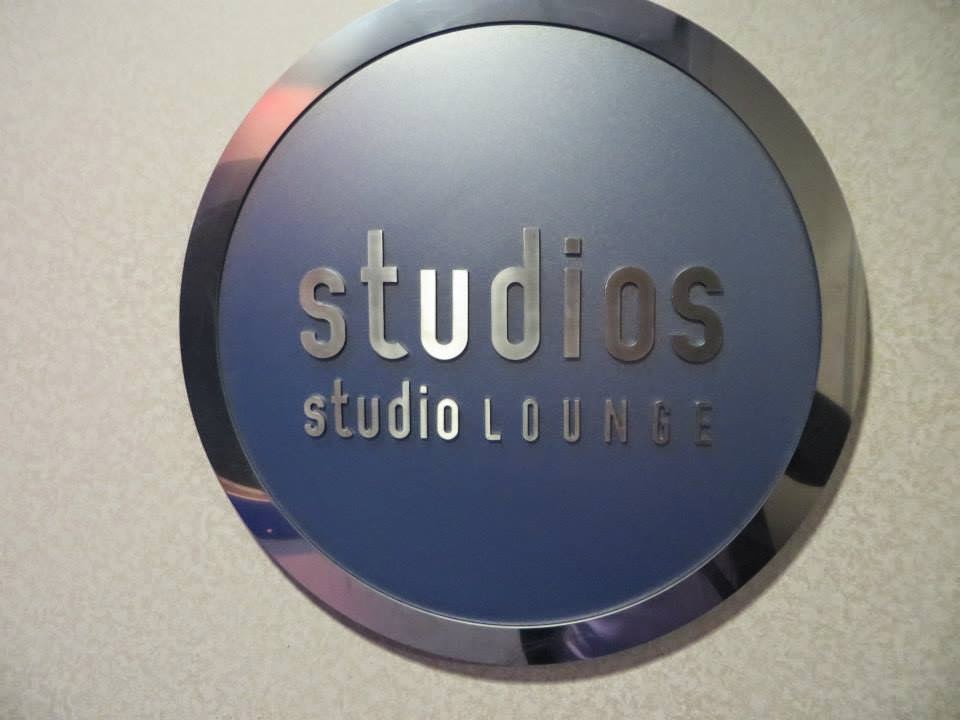 We chatted until time for lifeboat drill.  Our studio cabins are located in an area secured by key card entry.  The Studio Lounge is quite nice w/an espresso/cappuccino machine (hallelujah) & baked goody snacks all day.  The 100 sq. ft. studios are very nicely laid out; white with purple accents.  Functional, but lacking in some ways.  There are no drawers, only shelves.  The 2 tiny closets are merely indentations in the wall behind sliding doors.  The storage was certainly adequate for one person for 7 days.  The sink is a skinny rectangle that makes it impossible not to splash water on the floor.  The bed is extremely comfortable. 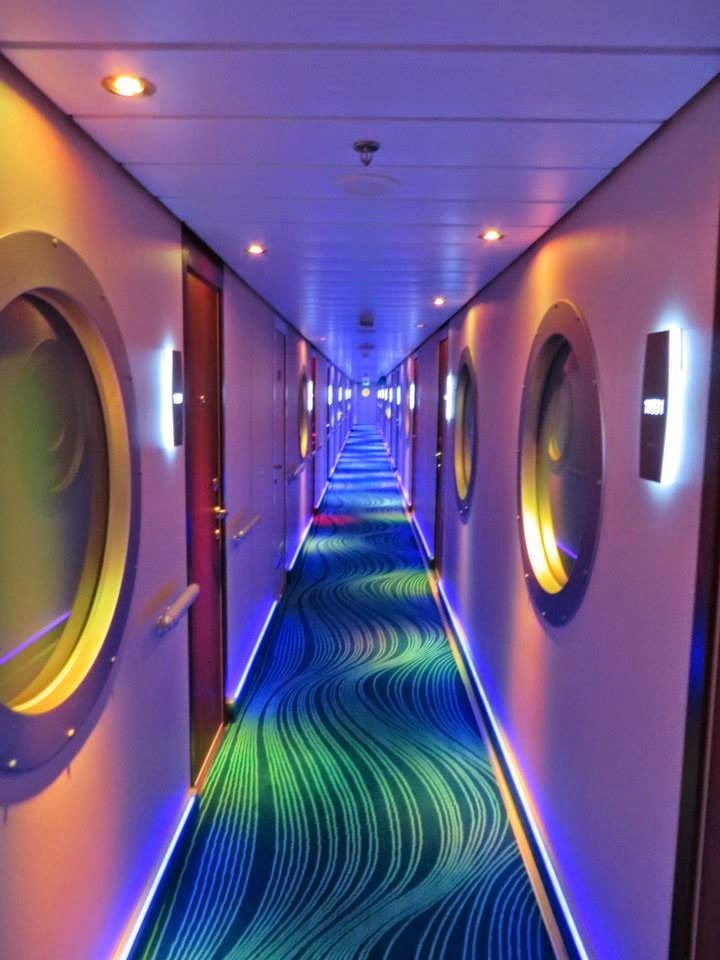 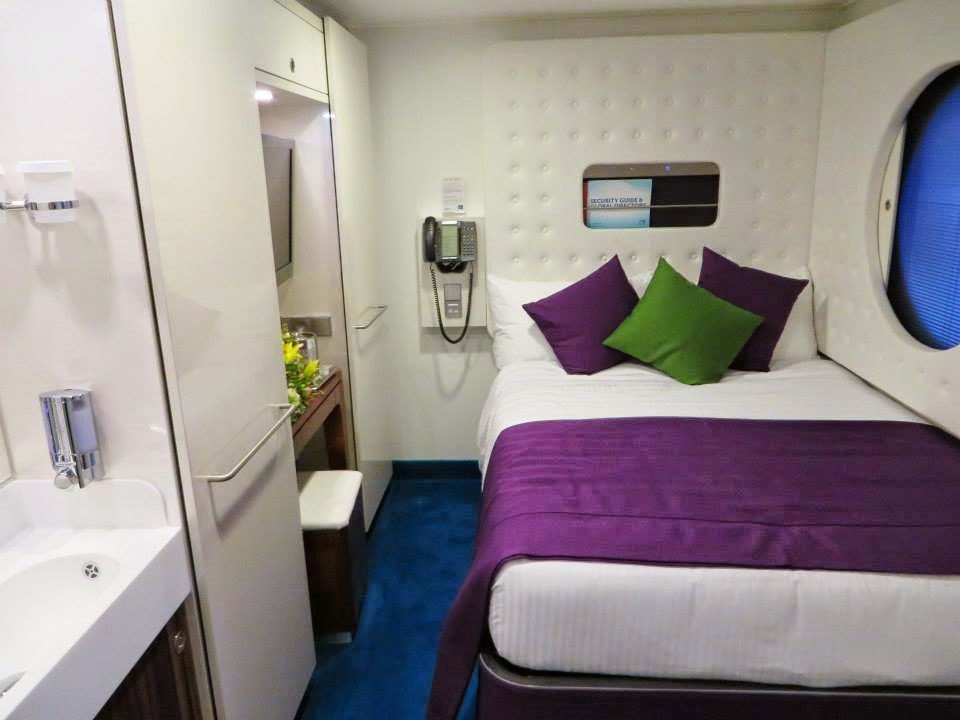 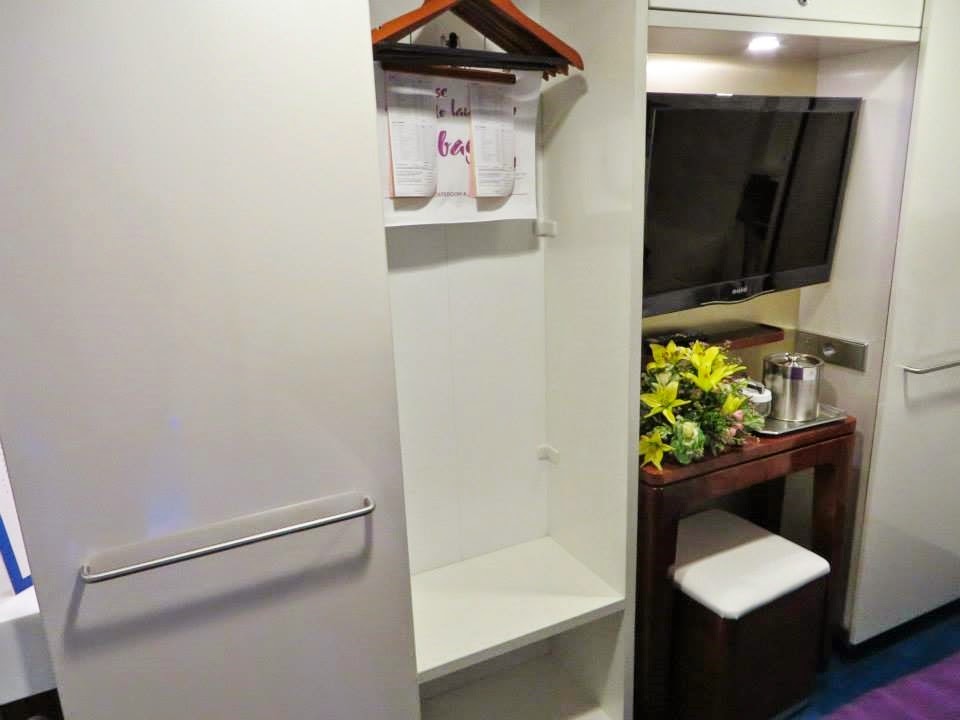 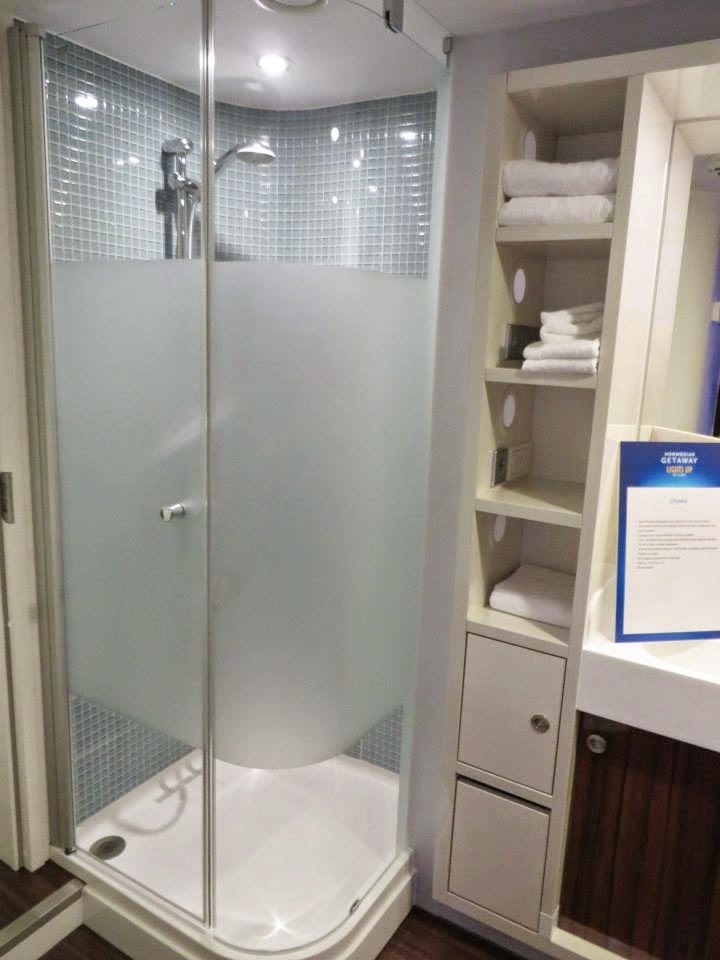 We did not have to take our life jackets up to the theater. It was a quick & painless muster drill.  I found it interesting that instead of calling out cabin numbers, they scan your key card to mark your attendance.  When I got back to the cabin, my bag had arrive.  And I met Jerome, my steward.  A sweet young man from Indonesia.  I told him I planned to be lazy, fairly low maintenance & to just keep the ice bucket filled. NCL has a new phone application, called iConcierge.  It's quite ingenious for keeping in touch w/ fellow Pax by text or phone; for checking the day's activities or your shipboard account; to make spa or dining reservations; & to check menus.  You download the app before you leave home; log into the app & set up your acct. once onboard; you're charged a $7.95 fee for unlimited use of this app via the ship's wifi.  It's perfect for trying to find your friends on such a huge ship. 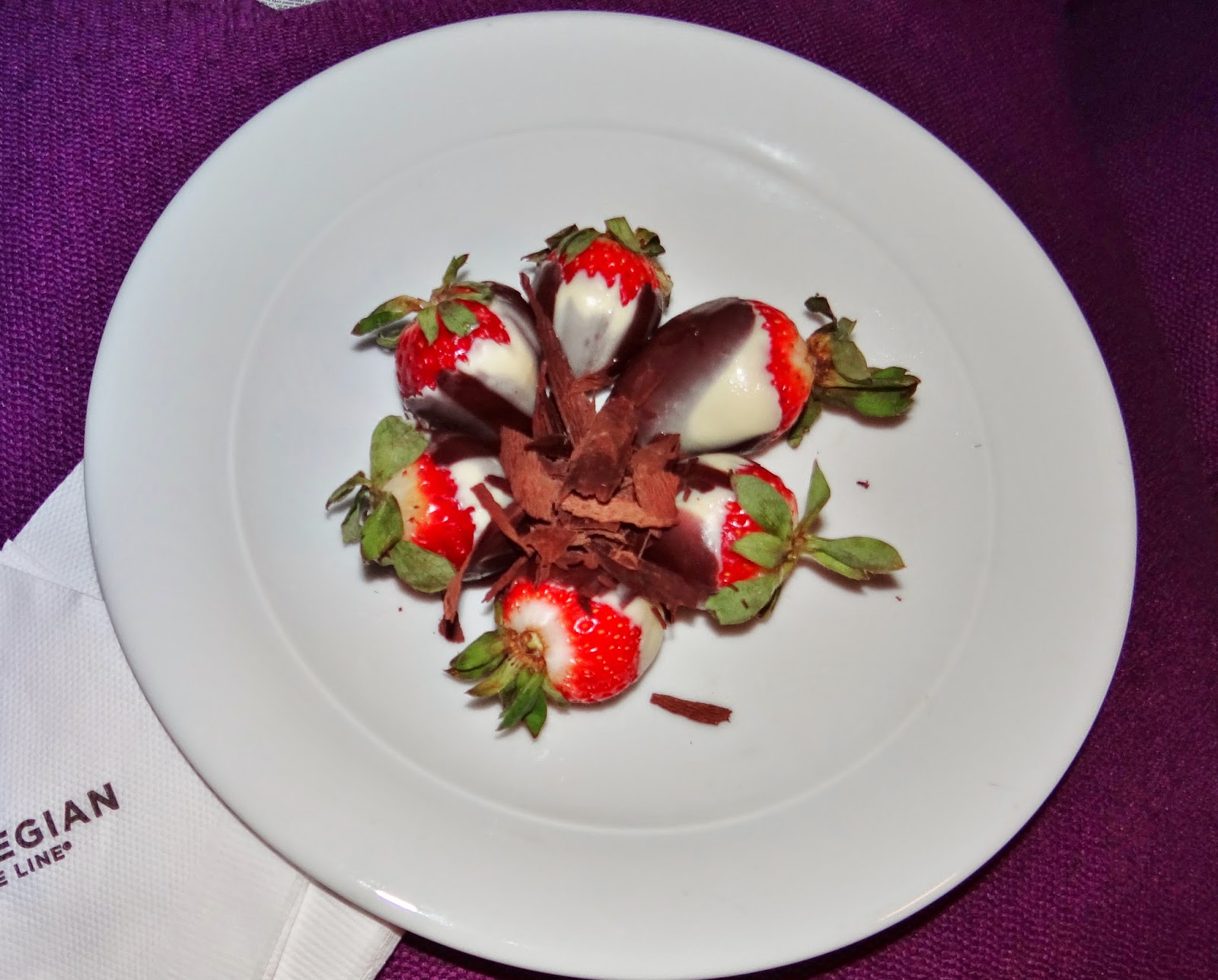 In a short while, there was a knock at the door.  A very nice steward handed me a plate of chocolate covered strawberries, a bon voyage gift from NCL.  How nice!  Since studio cabins do not have refrigerators, you had no other choice but to eat them (all)!!!  I laid down to read all the paraphernalia they gave me.  Shortly, I realized we were moving (4 pm).  I'm on deck 10 forward.  When sailing out of the Port of Miami there is that comforting, gentle roll once you clear Government Cut & hit the Gulf Stream.  I think I dozed a time or two.  Lou kept texting me.  She was trying not it fall asleep, while I wanted to nap.  At 6:30 she texted that she was in the Studio Lounge; so I got up  & joined her.  There was a singles get together in progress on the lower level. 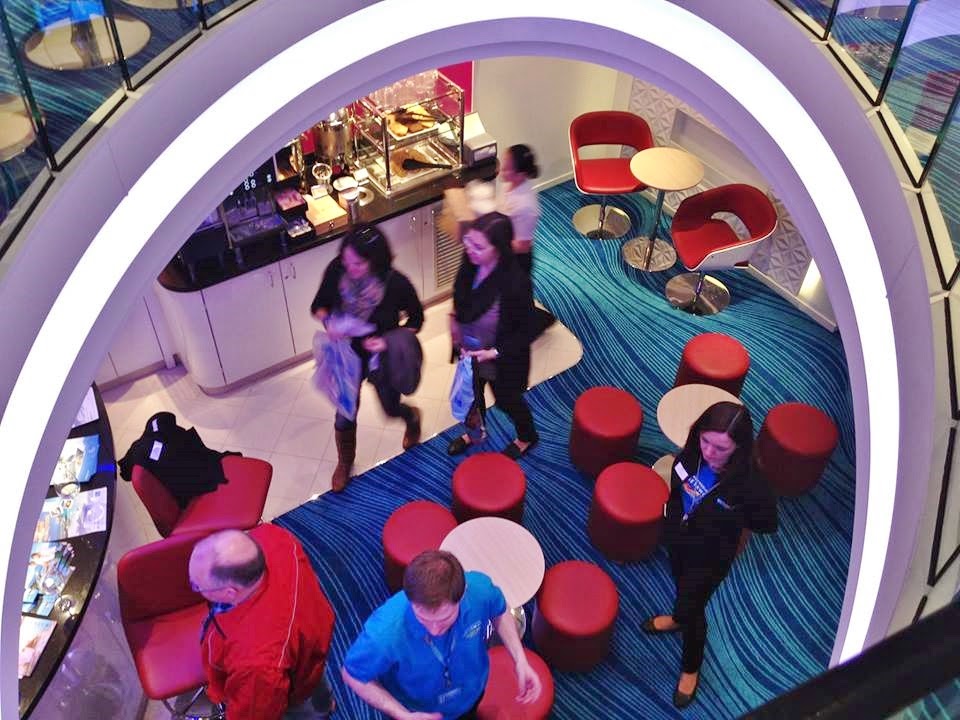 We sat & talked on the upper level until we decided to go for dinner in the Garden Cafe.  The cafe was featuring prime rib tonight.  I got a perfectly rare piece.  Also had some clam chowder, a Korean chicken dish & some creole rice.  The lemonade & some of the flavored waters became addictive. Had coconut ice cream for dessert.  The cafe was extremely busy & noisy.  With well over 4000 Pax, no set dining on this ship, lots of kids.....it was a bit chaotic.  Lou & I talked for hours; & they were closing the buffet when we left at 9:45. 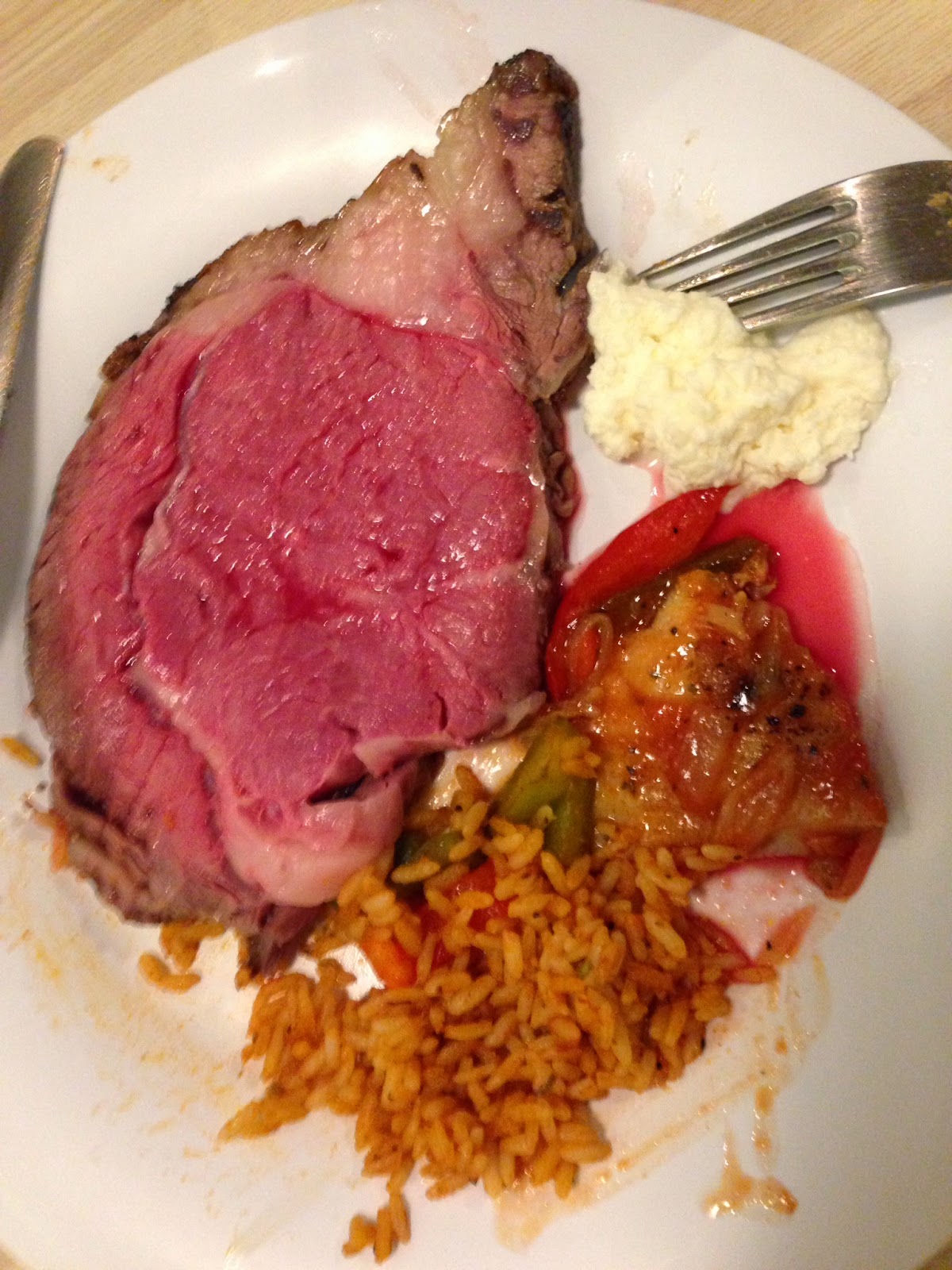 We decided to go down to deck 6 to see if we could find a comfy, quiet spot to read tomorrow.  Found comfy chairs; but looks like cigarette smoke and/or noisy traffic will be a problem.  There was a kind of cheesy trio in the atrium doing a Beatles tribute.  We stood it as long as we could.  Made a stop in the studio lounge to check out the free capp machine, get some ice water & a bedtime cookie.  Ever so grateful to not have to pay for specialty coffees in our private lounge.  We all agree that is a HUGE plus (with thanks to NCL's generosity). 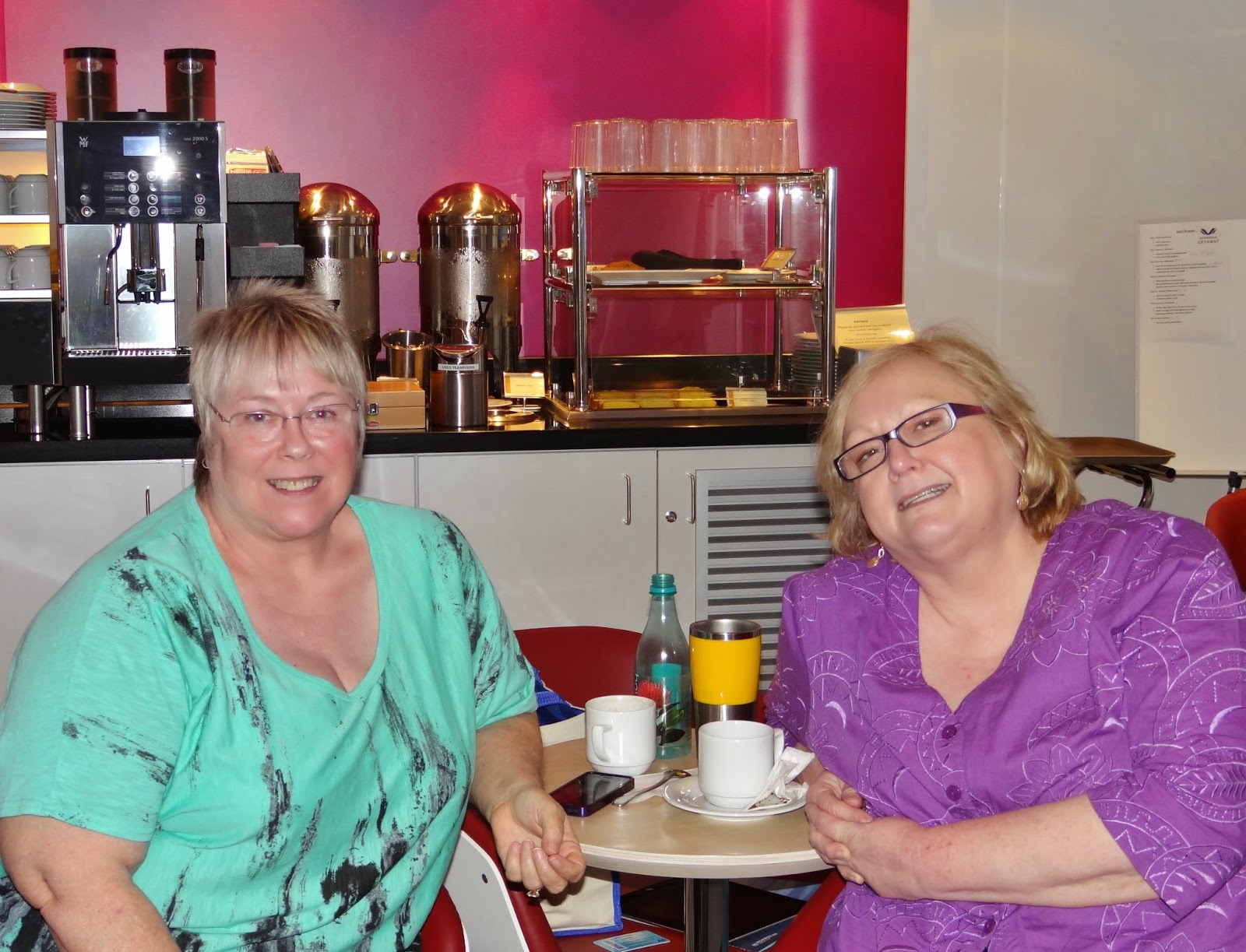 It's been quite a while since I sailed on a ship that leaves towel "animals" at turn down service.  I have to admit, the gesture does make you smile.  As I got ready for bed, I could hear music coming from somewhere below (possibly one of the lounges?).  Sound proofing between cabins is adequate; but there are those intrusive announcements coming from out in the hallway.  On embarkation day, they pump out a lot of info.  I'm cautiously optimistic that there will be fewer tomorrow.  One can only hope. 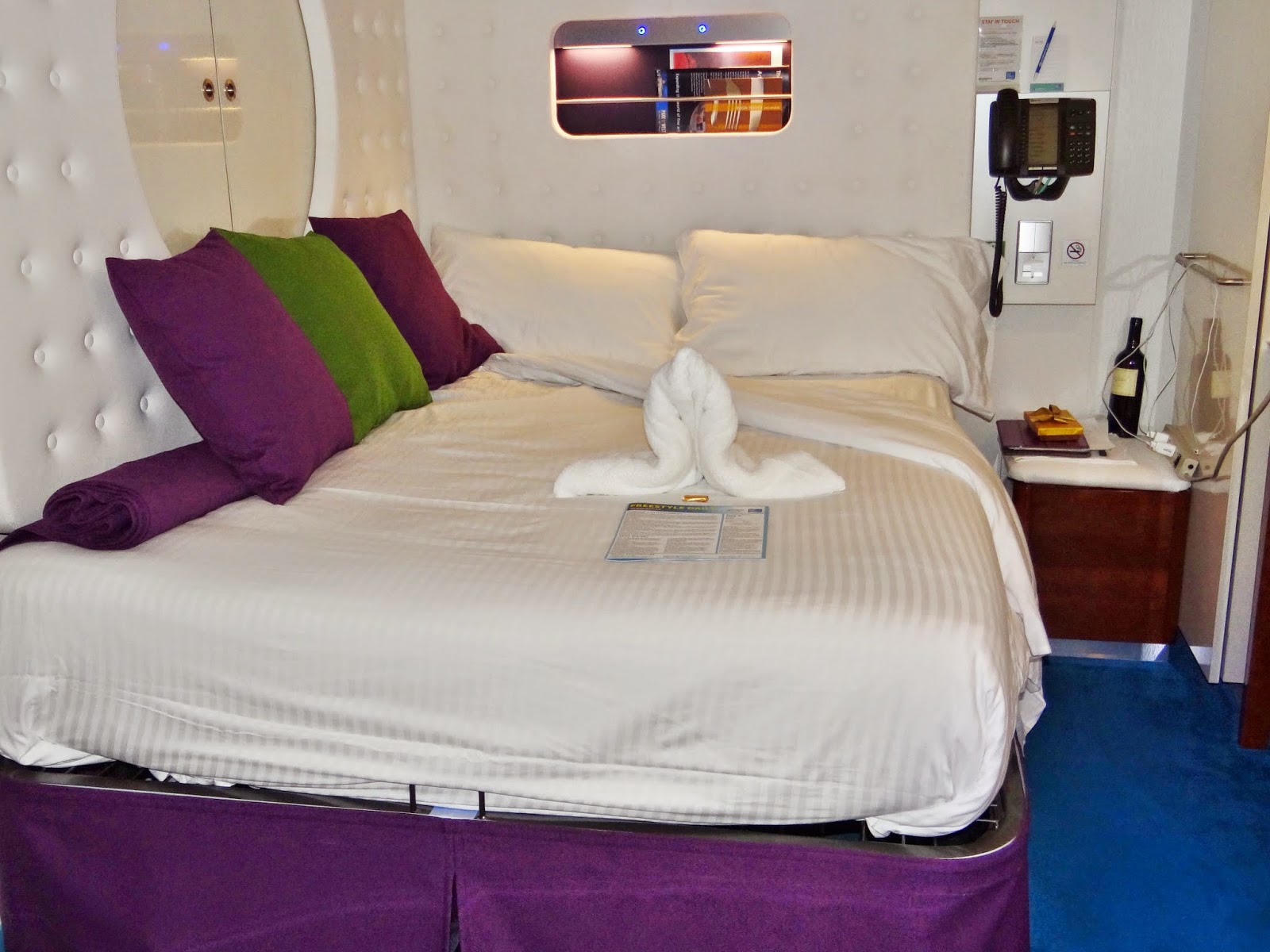 There is no clock in the cabin (which I knew).  I planned to tell time on my iPhone.  But for some strange reason, my iPhone thinks it's 3hrs later than it really is.  Who knows.....maybe we've entered the twilight zone!

Great pictures. I have thought that maybe we should try an NCL or HAL (Crystal is just so expensive!)-- look forward to reading your take on it. It sounds like the studio rooms may be some of the best, what with that lobby. Janet Greenlee