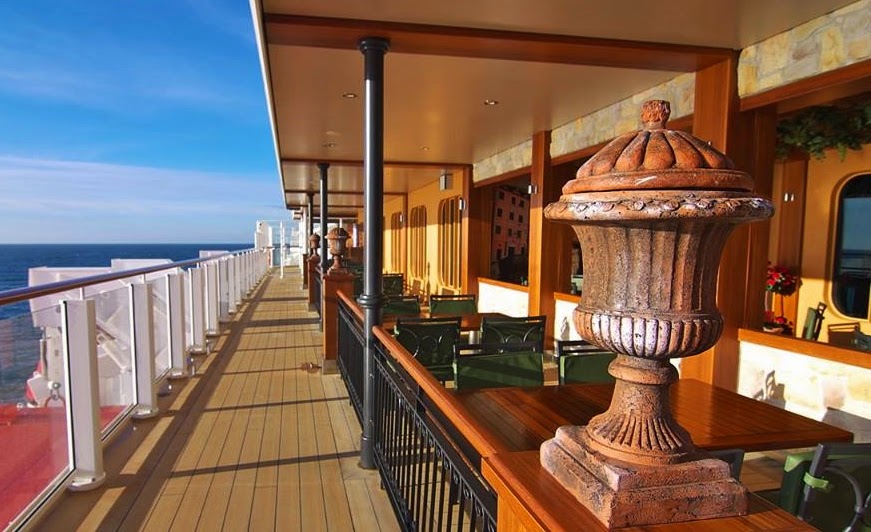 The Waterfront on Deck 8

Didn't sleep much.  Couldn't get comfy. Lou texted about 10:15 (won't tell you what her morning greeting was). She was in the lounge.  I attempted to wet down the cow licks in my hair, put a muumuu on over my gown; & joined her there.  At least a few others looked disheveled too.  I had my first "free" capp, excellent I might add.  Woke with a headache; & couldn't decide what I wanted to do with this day.  She bought a spa pass; & was going there for a while.  About all those PA announcements.........you know it's not going to be any better than yesterday, when the first one of the day is the singing of... "you are my sunshine, my only sunshine" compliments of the Cruise Director (Sinon).  I'm going to have to learn to block this out or else ill implode! 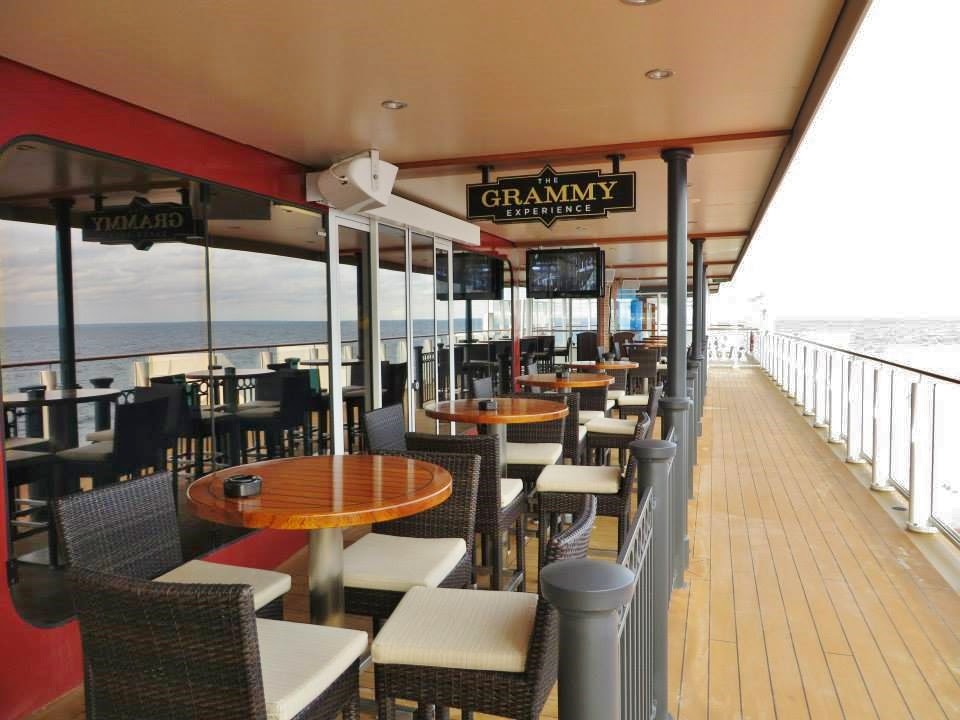 The Waterfront on Deck 8 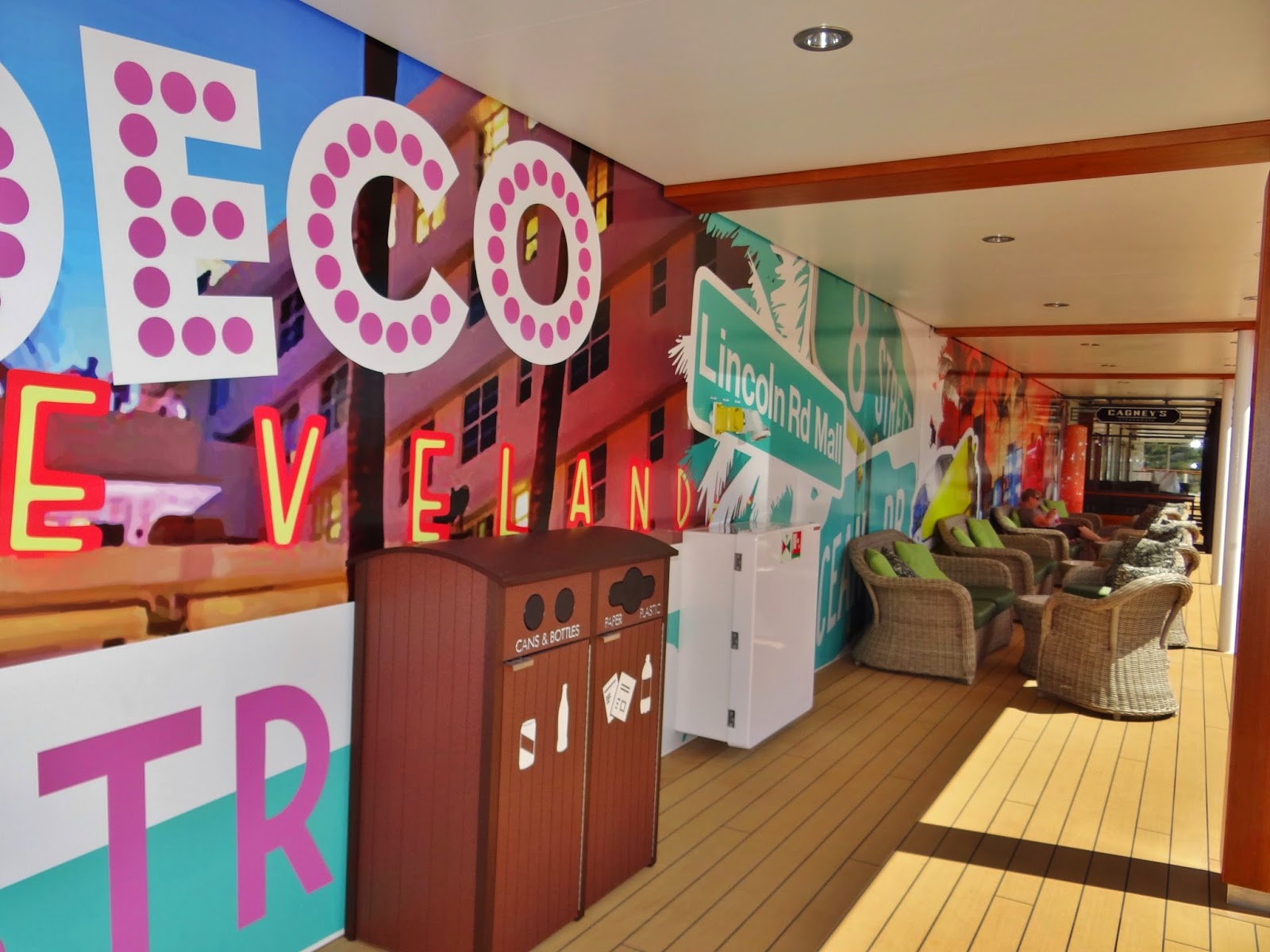 I tried out my futuristic shower "tube".  Doable, except the soap dish kept hitting me in the back.  Felt slightly better.  Decided to go down to deck 8 to check out the outdoor promenade deck area called "the waterfront".  (Still searching for that comfy, quiet reading spot.)  It's in the 70's with a nice breeze, so I parked myself outside Sugarcane's (the mojito bar).  I do enjoy the occasional mojito.  They have something called a "mojito flight", 3 oz samples of 6 different kinds of mojitos ($15).  I thought what the hell........get a buzz BEFORE lunch!  A few of them were very tasty, the rest just okay for my palate.  It was nice out there for about an hour, until all the smokers came out to play; & ruined it.  And why do they always have to stand upwind? 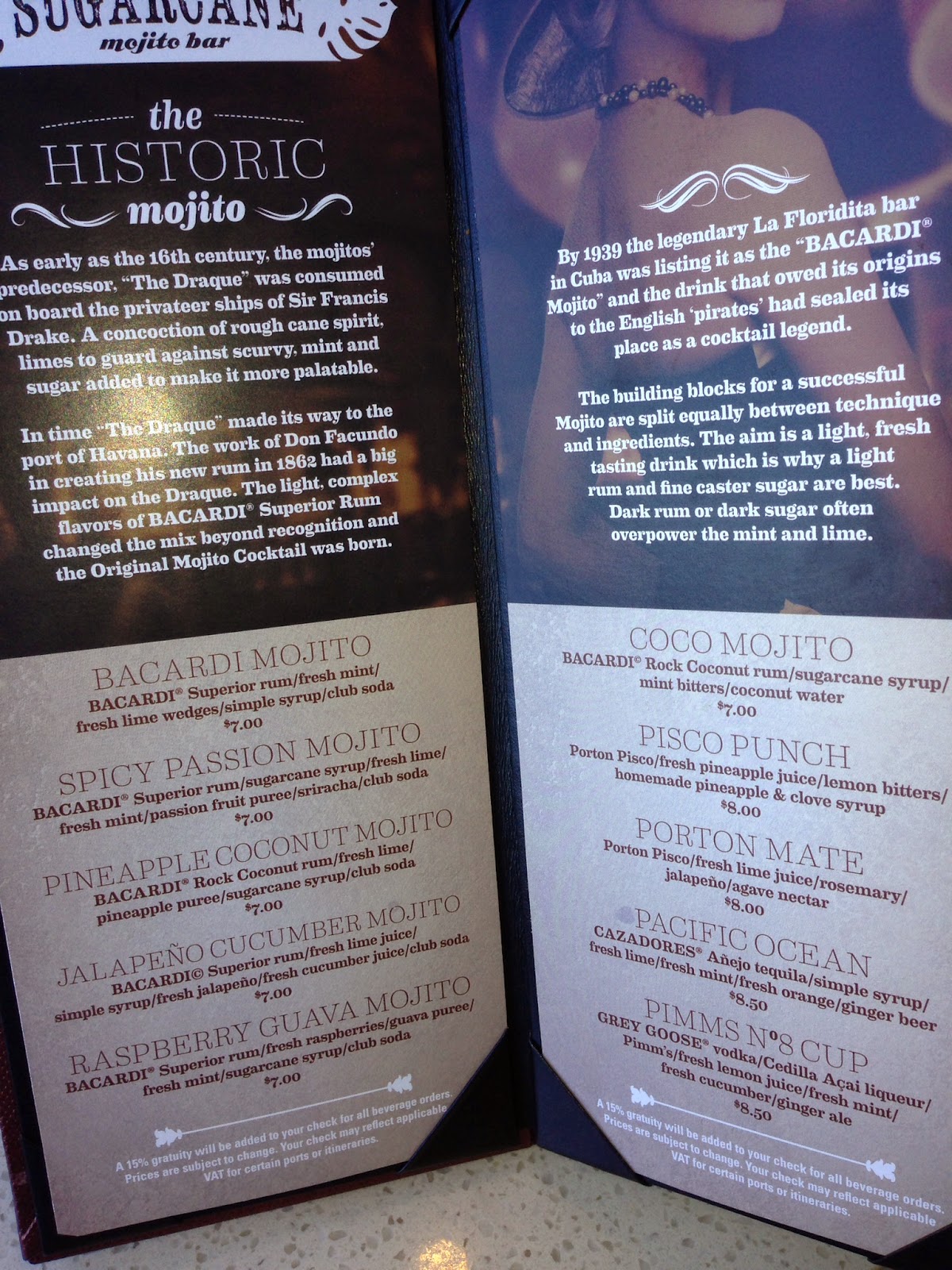 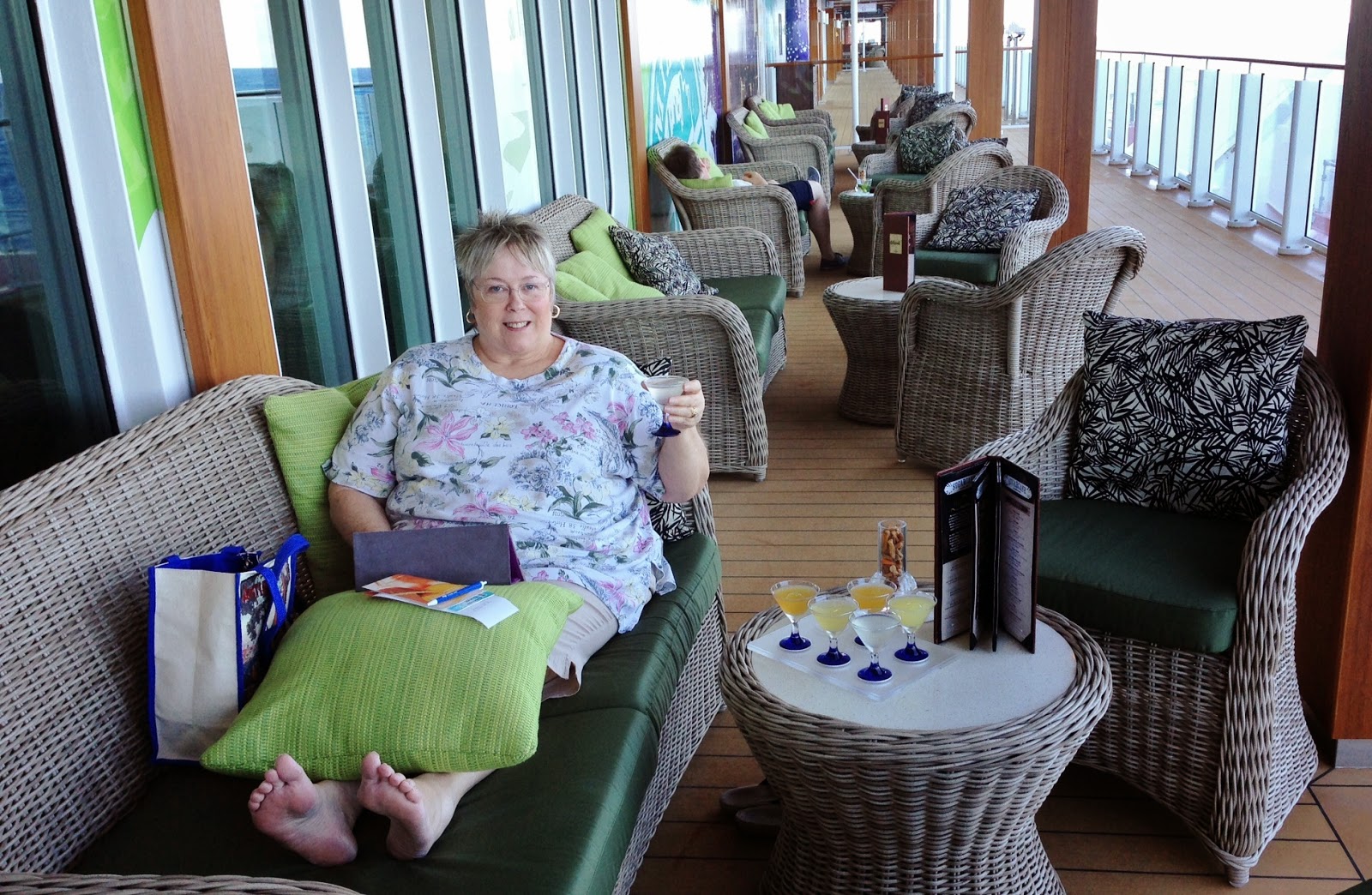 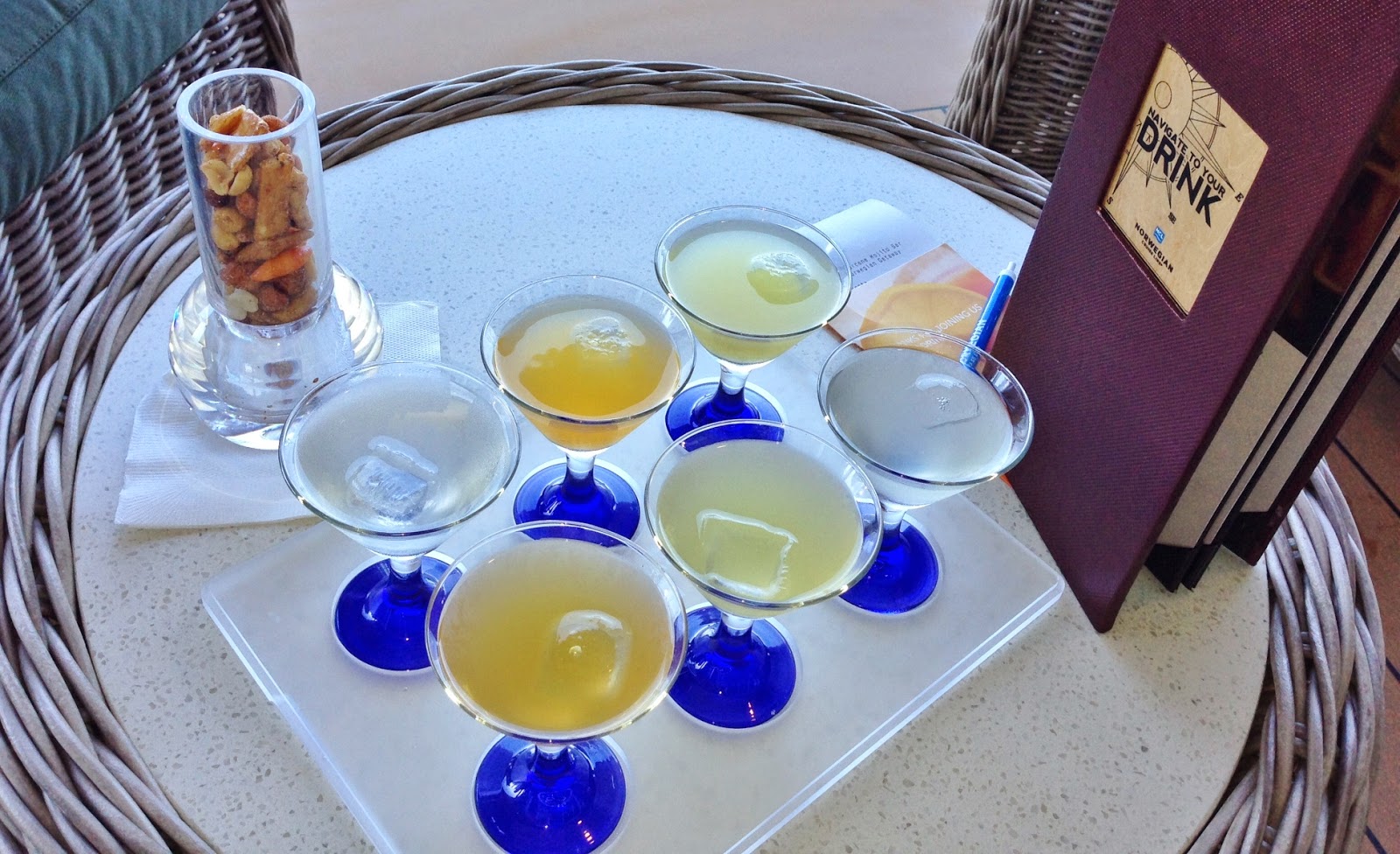 Lou texted that she had gone on to lunch after the spa; & was now headed home for a nap.  Since the buffet was already closed, I was on the hunt for sustenance.  I discovered a Cuban buffet at the Flamingo Grill.  Being close to the water slide & pool, it was noisy & packed.  But there was a pleasant breeze.  I ate; but didn't linger.  Everything I tasted was really good.....Puerto Rican roast port, black beans & rice, flank steak with chimichurri, cheese croquettes, fried plantains, & yucca.  Dessert, tres leche cake, was so so; 2 bites & I was done.  Back to the nest for a siesta. 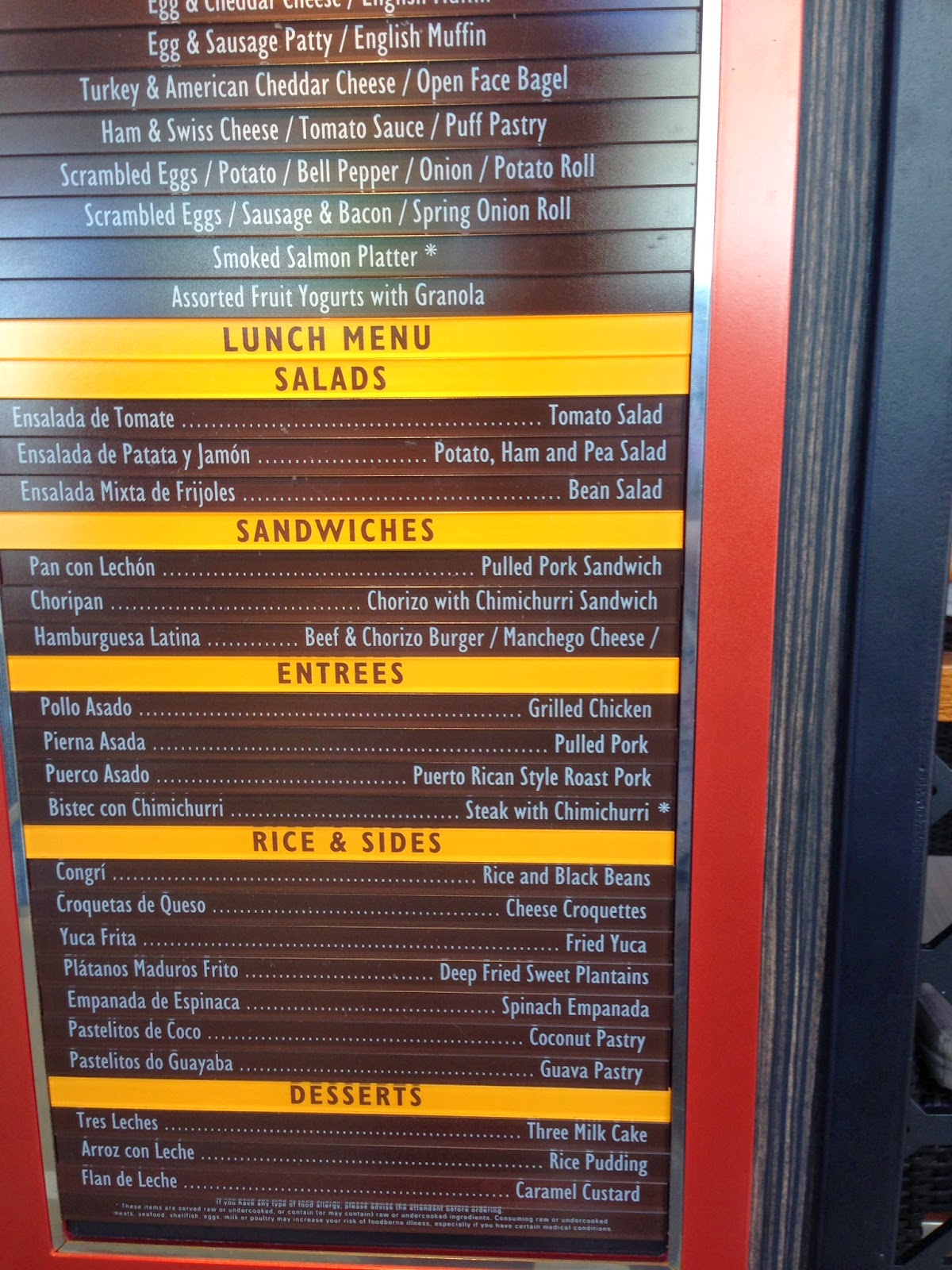 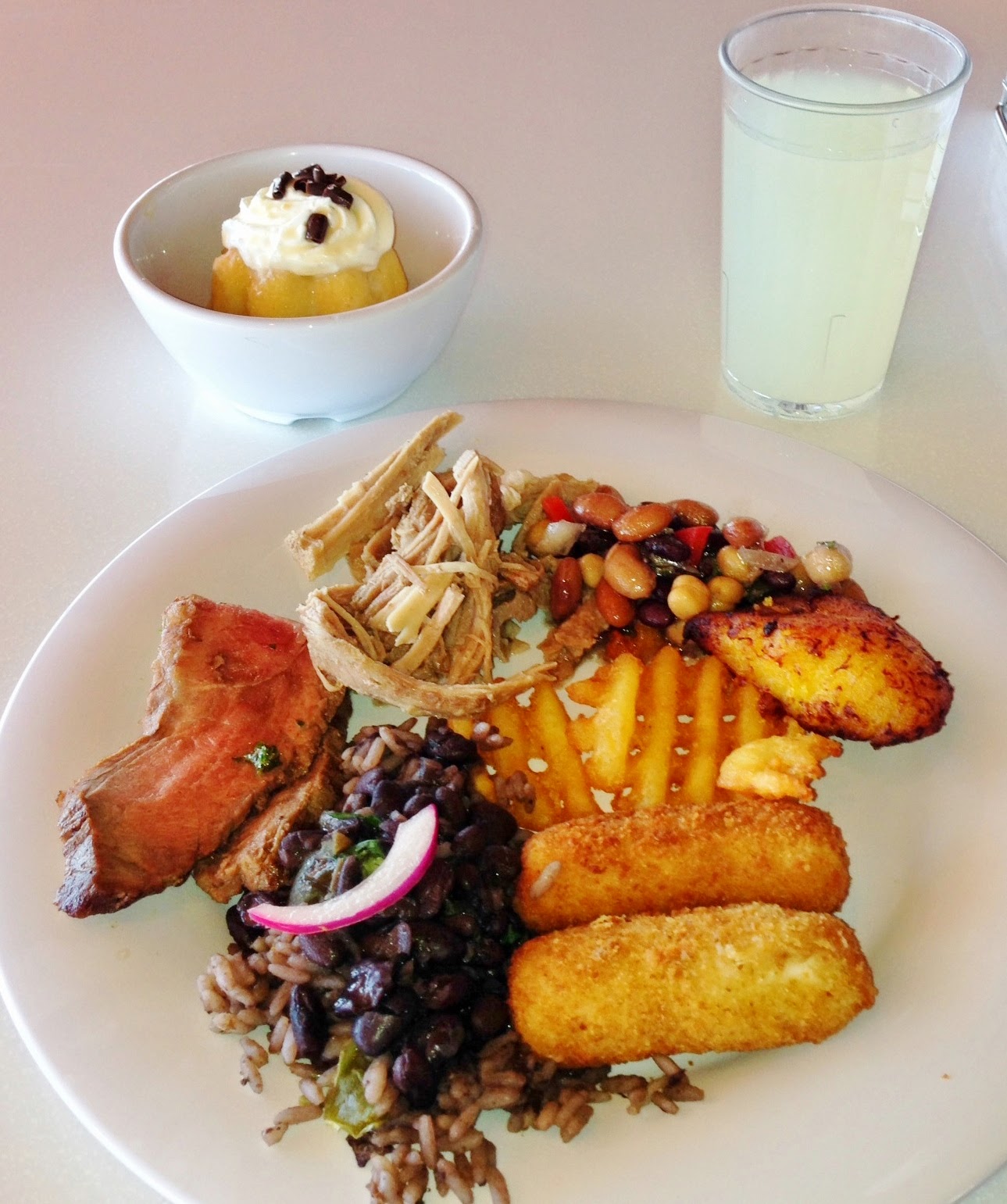 Lou texted at 6:30 from the library....she FINALLY found a quietly, comfy place for reading.  That should have been a no brainer from the get go.  It's just kinda hard to find, isolated, but you can't people watch.  Trust me there's a LOT of "interesting" people watching to be done on this ship!  I freshened up; & joined her there.  It's pseudo formal night; & portraits were being taken around the ship.  There was some formal attire; but the vast majority were somewhere between casual & ".....they should have known better".  Freestyle cruising, for better or worse. 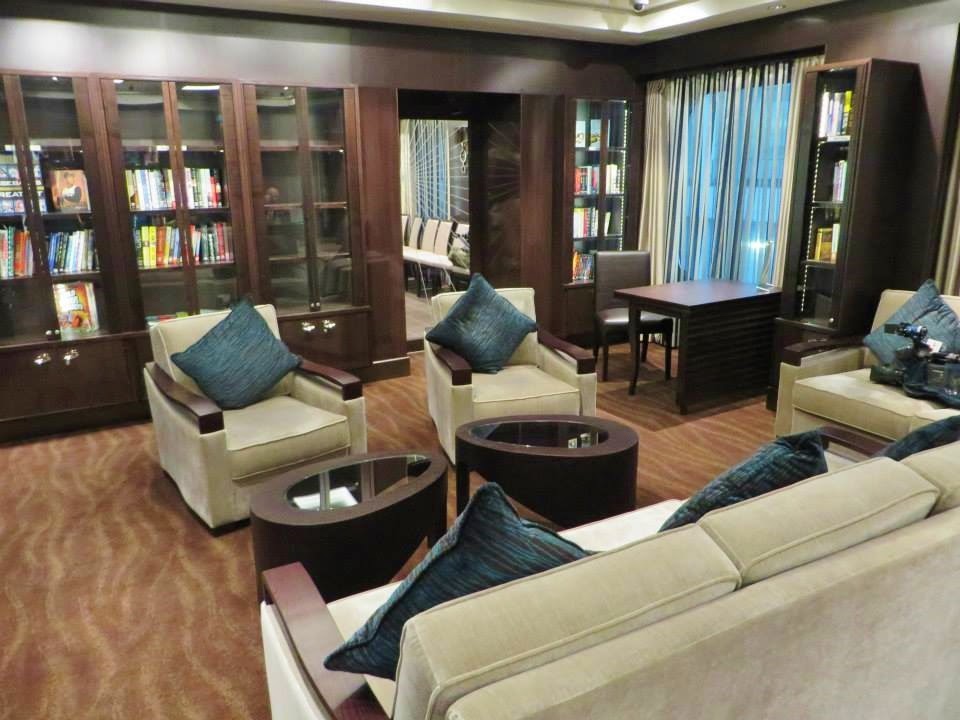 We ate up in the Garden Cafe again tonight, since it was the seafood/lobster buffet.  It was packed; & we grazed the immense selection.  We both had lobster tails (I saw some plates with 6-8 on there).  Most everything was pretty darn good.....New Orleans seafood paella, chicken & shrimp curry, some sort of fish with spinach mango salsa, cauliflower & broccoli, & shrimp kabobs.  The only disappointment was the seafood ceviche.  Finished with pineapple sherbet.  We sat & talked for several hours.  Since we had to walk the full length of the ship, we took the scenic route this time across the pool deck.  At 10:45, people were still in the pool;  & the hot tubs were full.  Temps would have been perfect for sitting outside for a while.  But we agreed we'd had enough of this insanity for one evening. 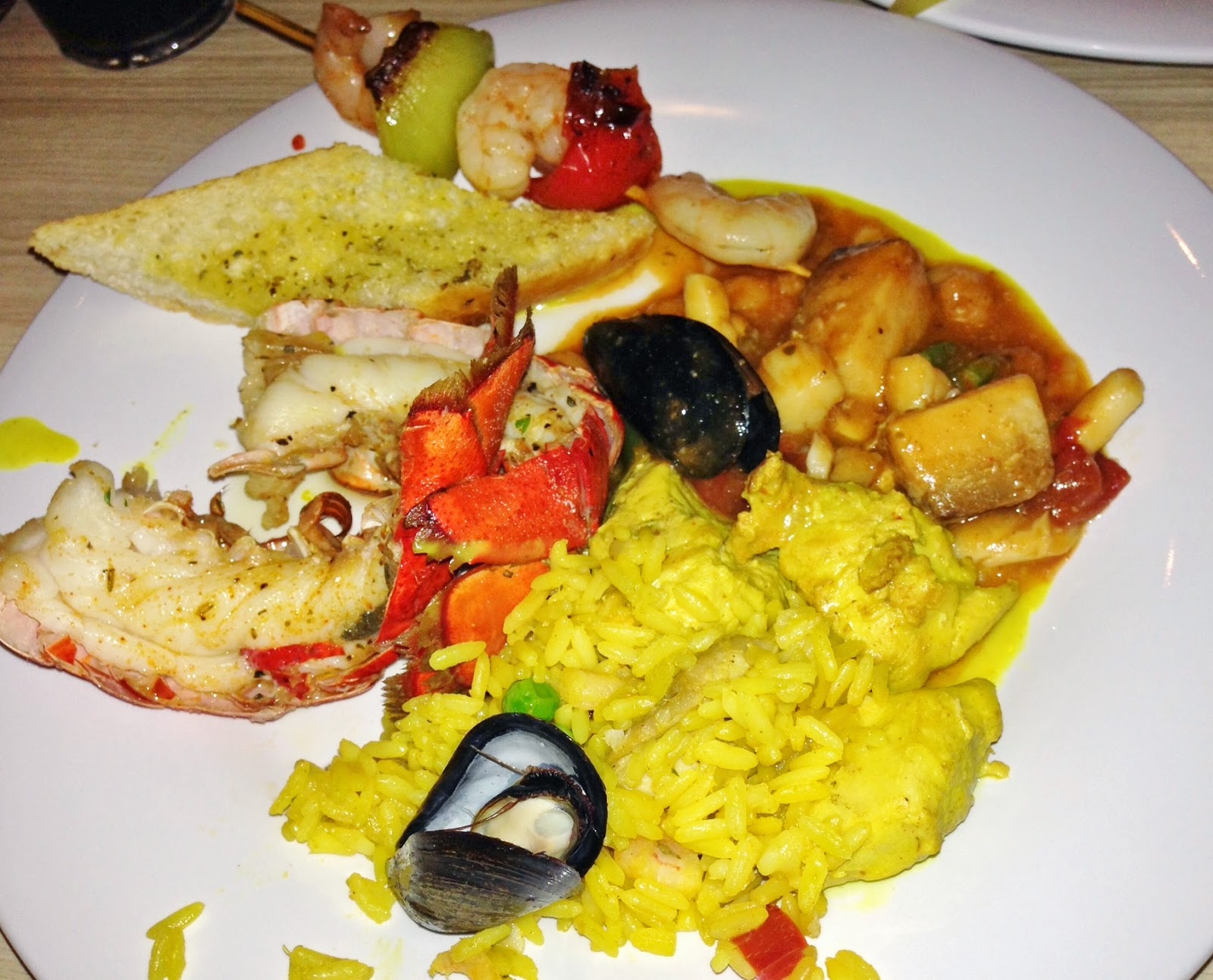 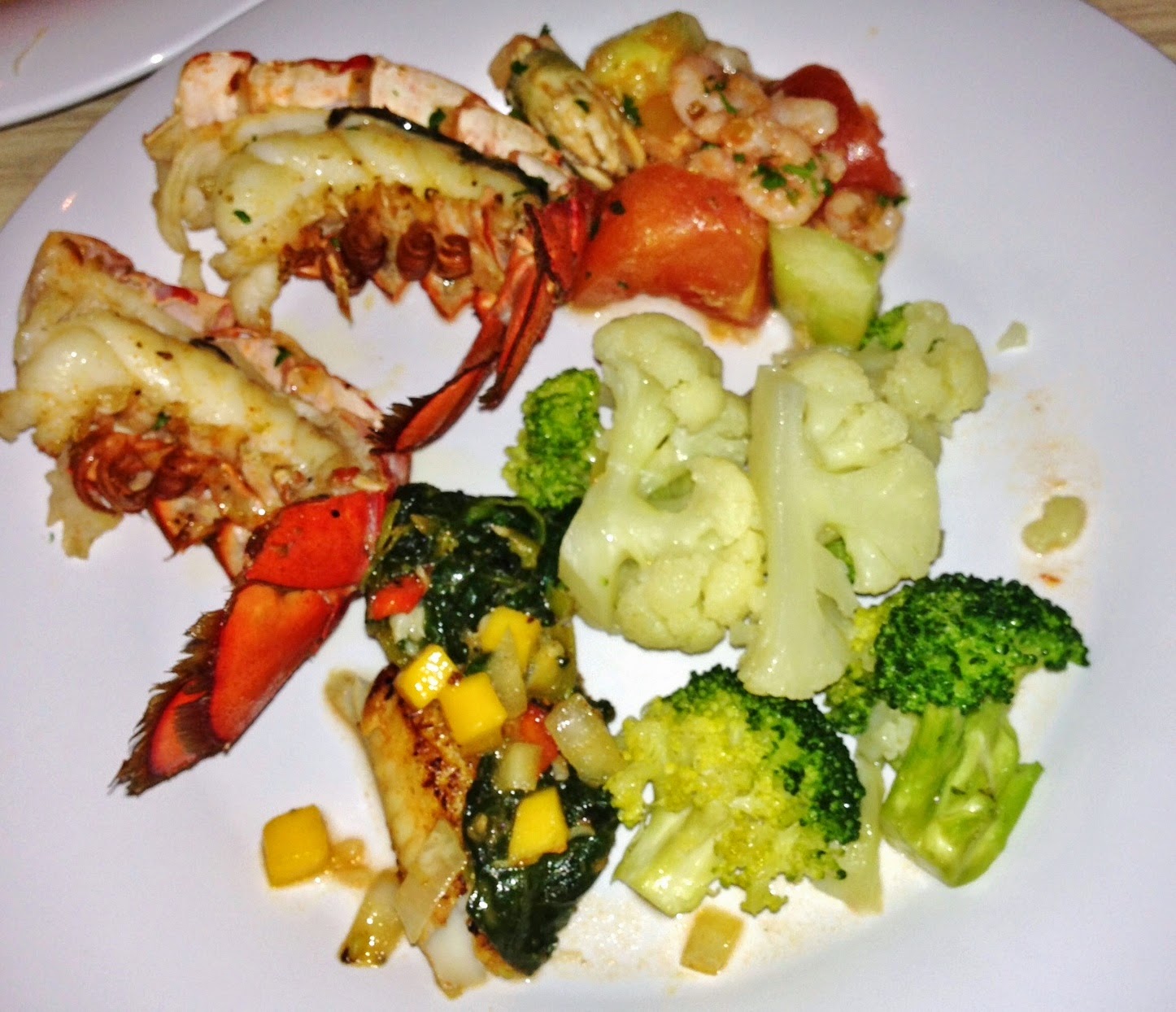 We are advancing our clocks one hour tonight (instead of doing the daylight savings time thing last night when the rest of the U.S. did).  I have no earthly idea what time it is right now.  The iPhone clock is still acting crazy while under the influence of the ship's wifi.  Even the clock on the TV is showing something entirely different.  Don't guess it really matters just as along as I wake up sometime tomorrow. 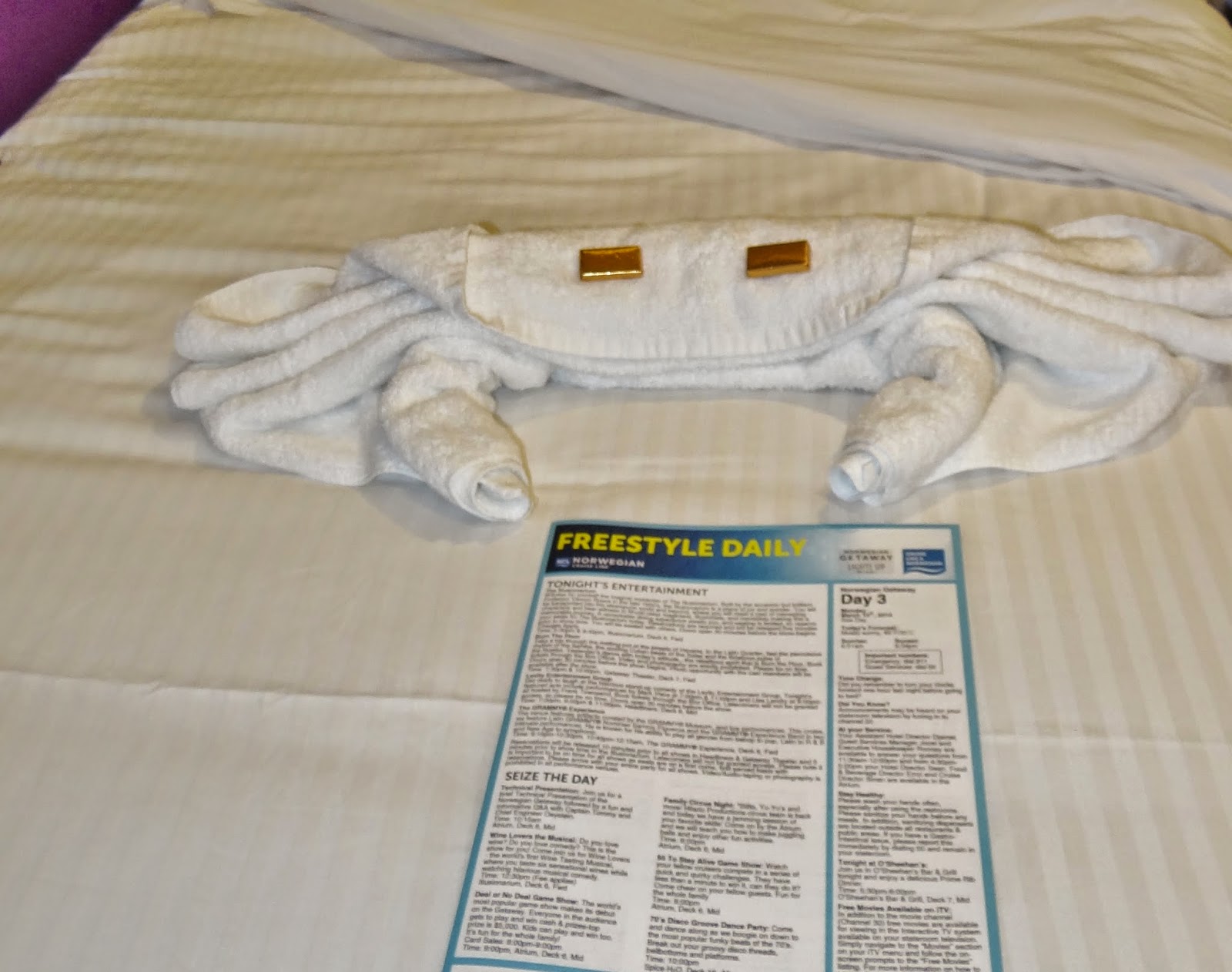