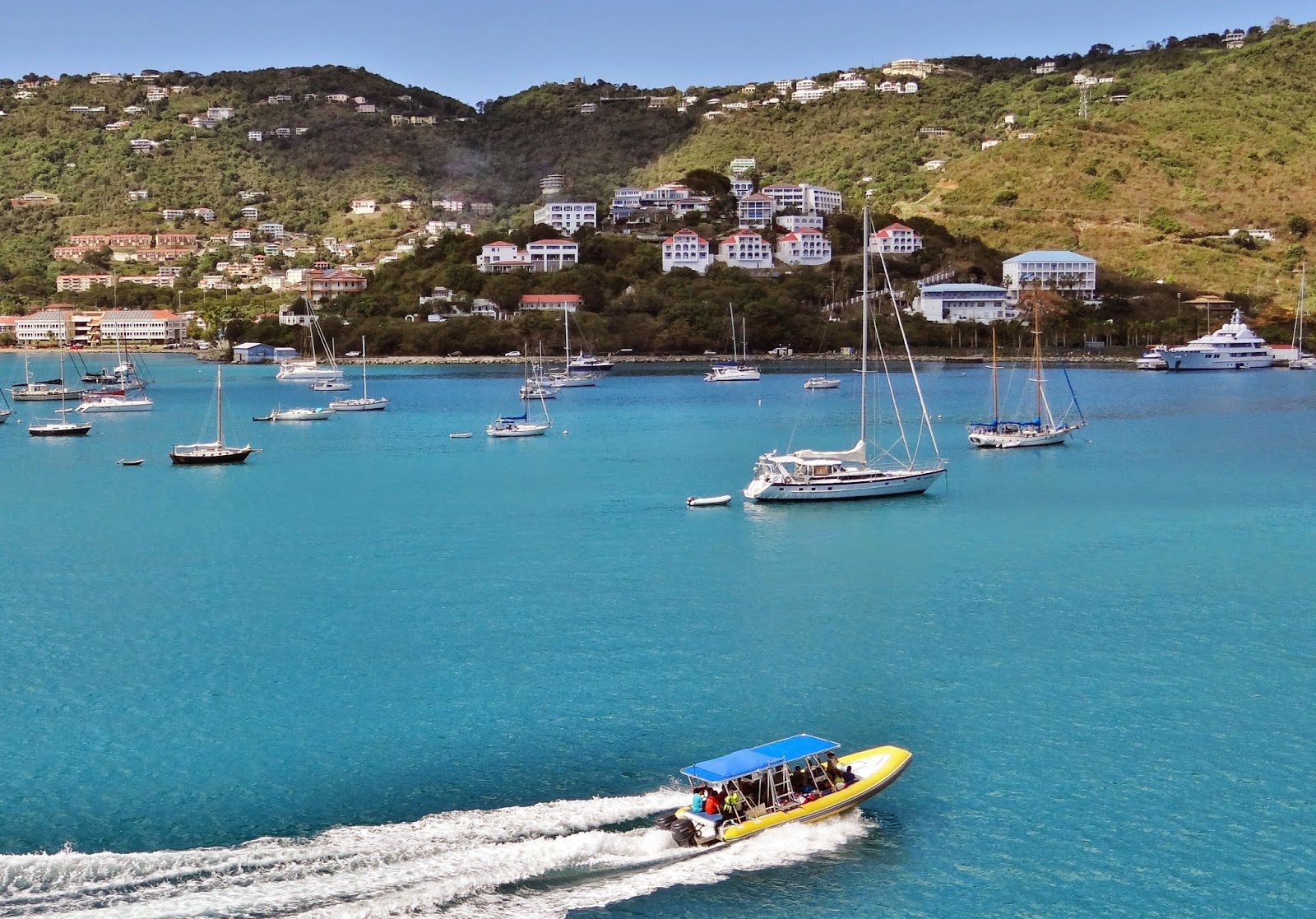 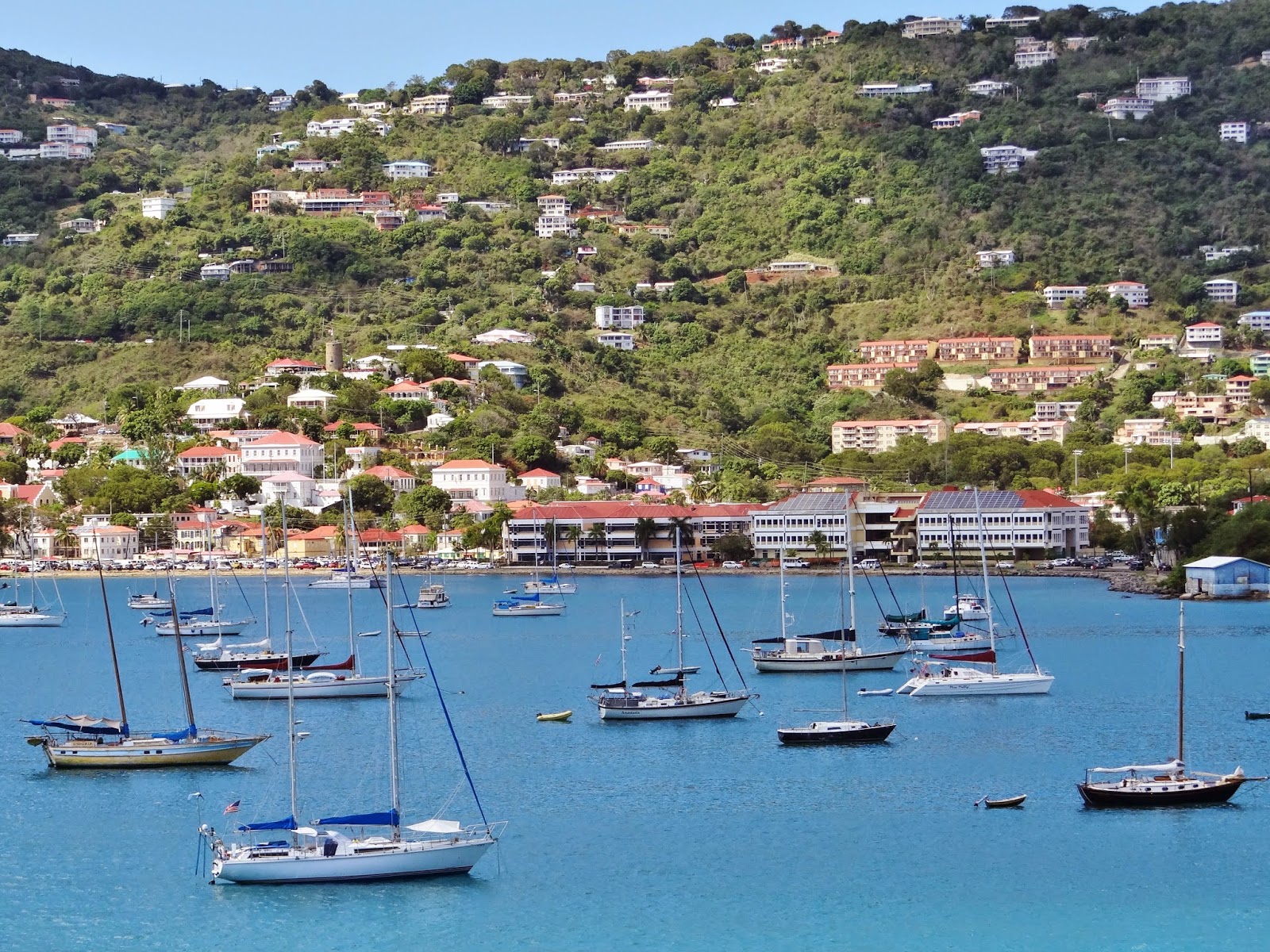 I really got invested in this silly spy novel set onboard a cruise ship.  Had to make myself stop at 3:30, after which I slept like a rock in between crazy cruise related dreams.  Barely remember hearing the announcement that the ship was cleared about 8:10.  Next thing I heard was the announcement for crew safety drill just before 10.  Made a coffee run; came back to read a little while in bed.  Lou texted at lunchtime to let me know she was up at the buffet.  It was quite civilized up there.  Most everyone is obviously ashore. And it's hot as blue blazes out there.  I caught Lou up on last night's events.  Showed her the videos I took of the fireworks & the "Thriller" flash mob. Being so close in age, we took a walk down memory lane musically. 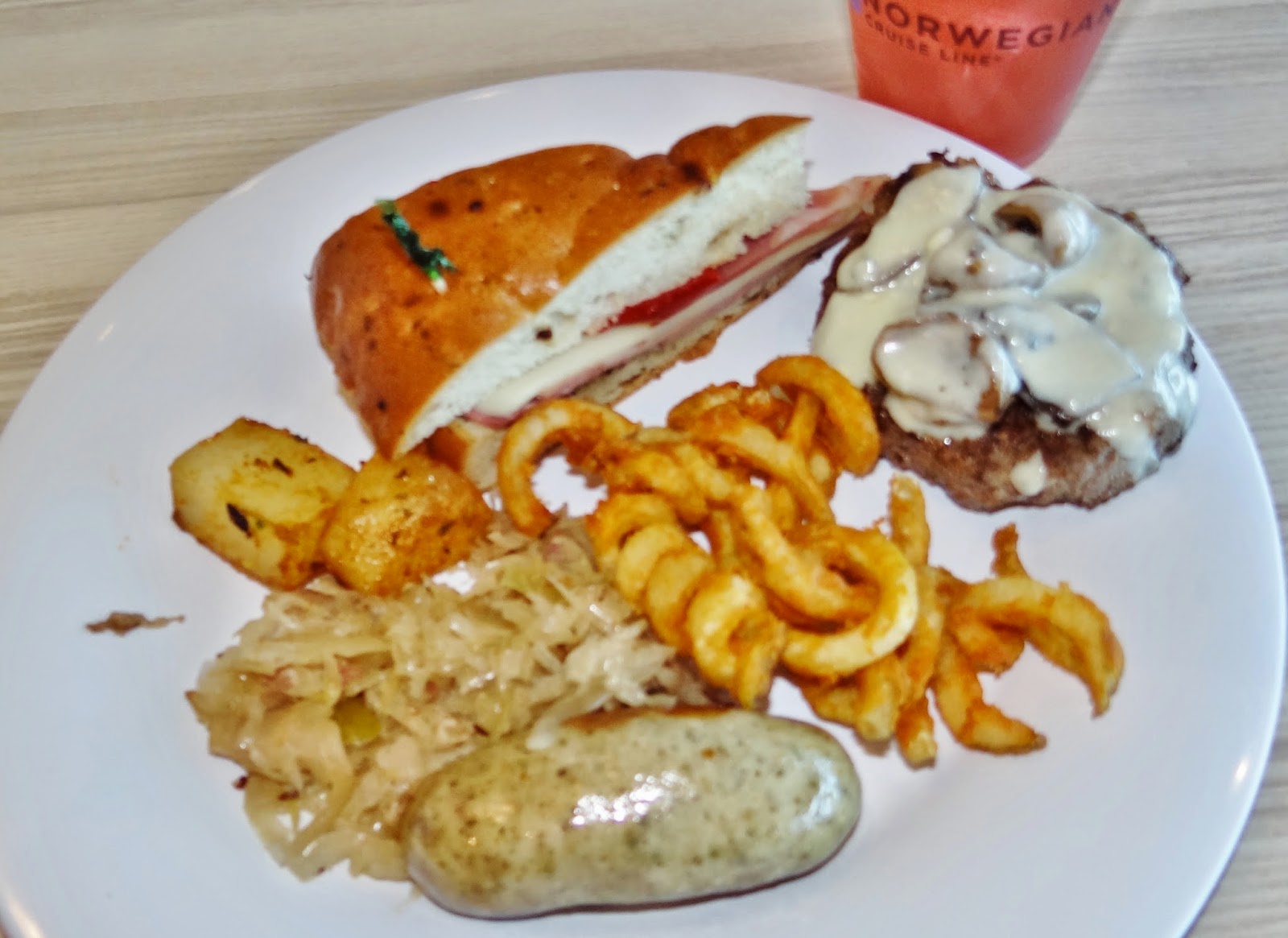 The lunch menu provided a few treasures: grilled brats with sauerkraut sautéed with a little corned beef seasoning, garlic roasted potatoes, seasoned curly fries, & the mushroom blue cheese stuffed burger (sans bun).  The one miss was a poor attempt at a muffuletta sandwich.  I had a refreshing scoop of pineapple sherbet for dessert.  She wanted to go rest her hip for a while.  I decided to go up to the promenade deck to take a few photos.   Quit a few mega yachts in the harbor.  I see Larry Ellison's (Rising Sun) is still home-ported here.  The sky a vibrant blue with big puffy white clouds.

The larger "Solandge" in front of the "Gallant Lady" 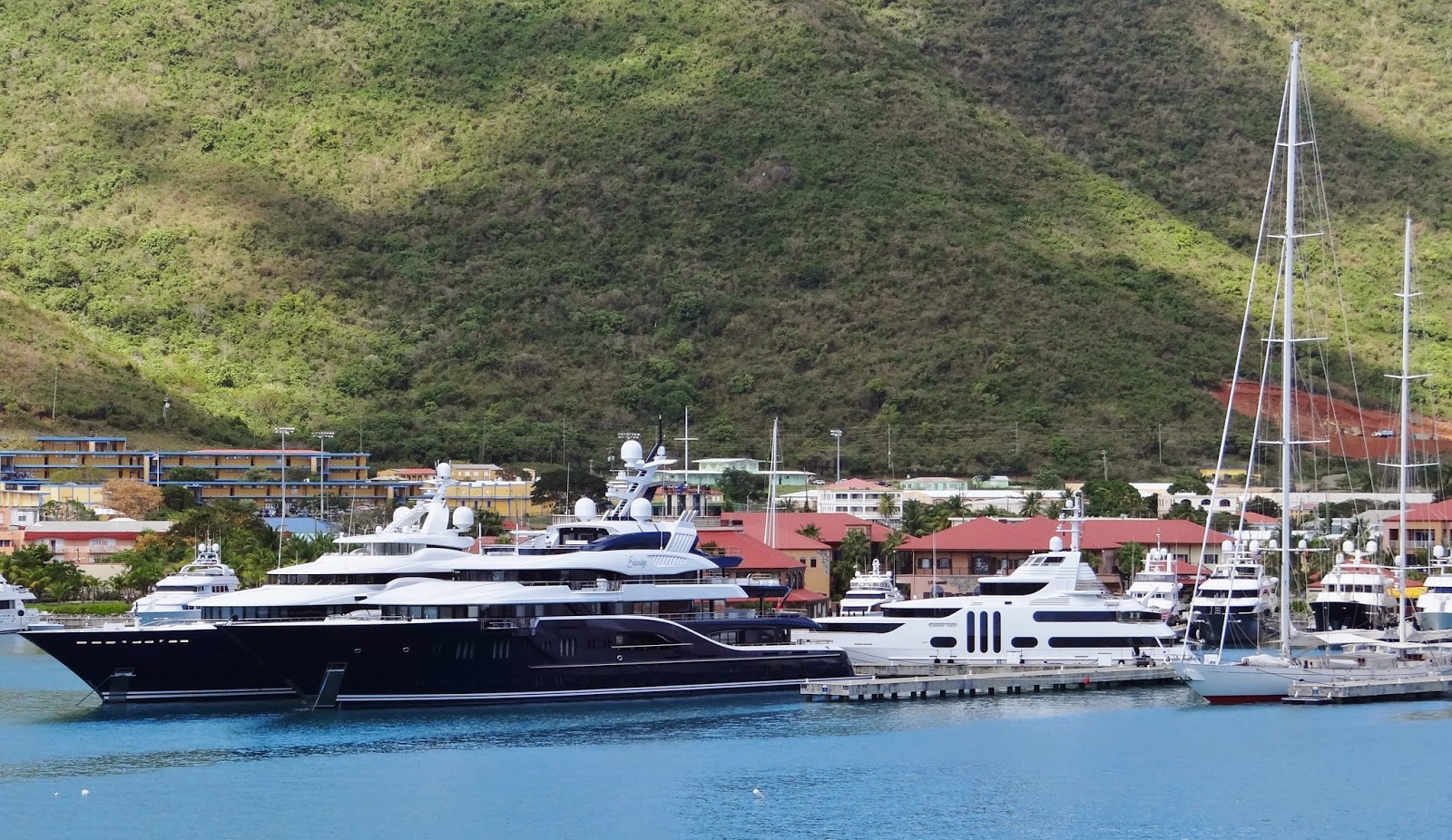 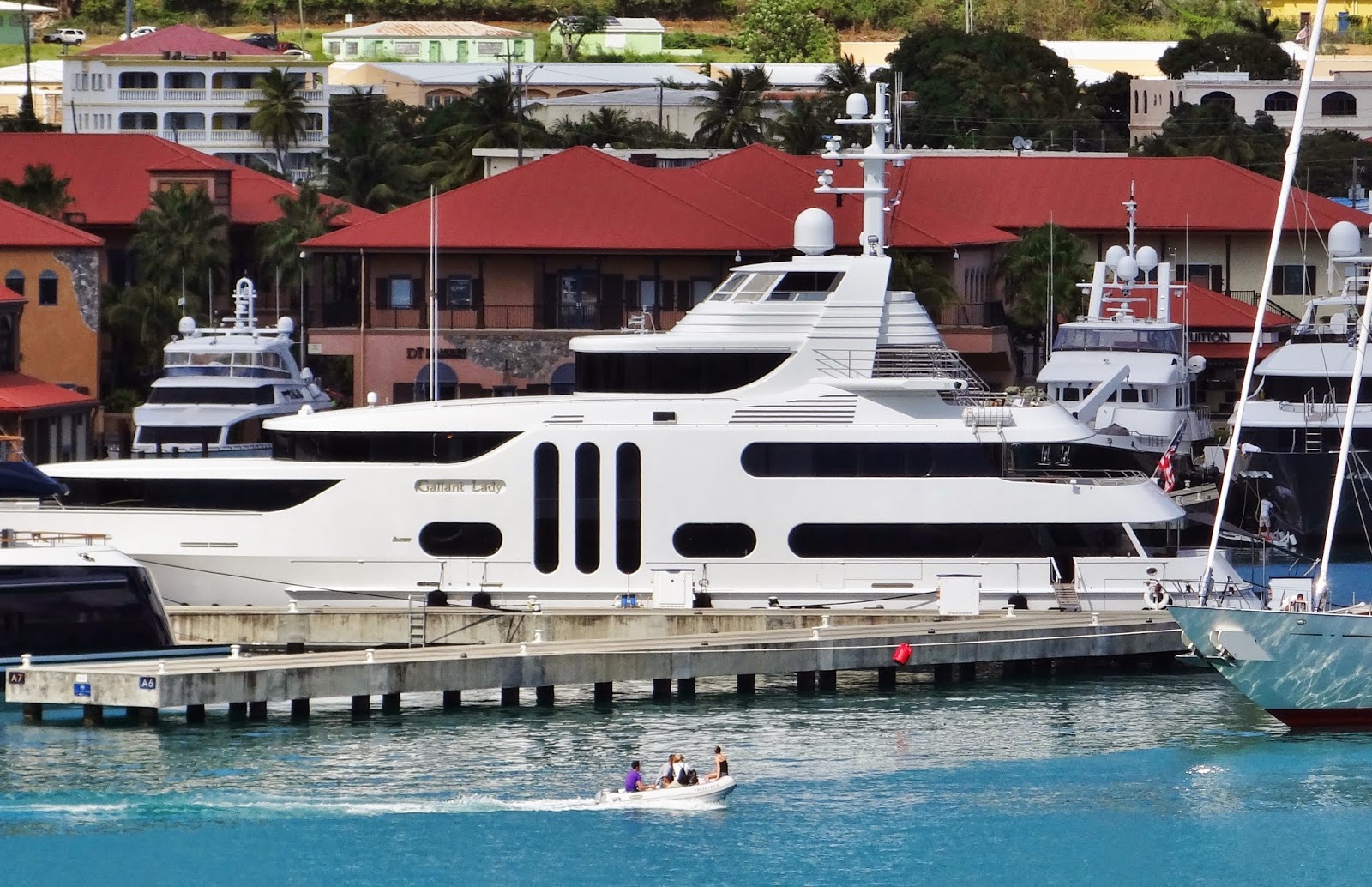 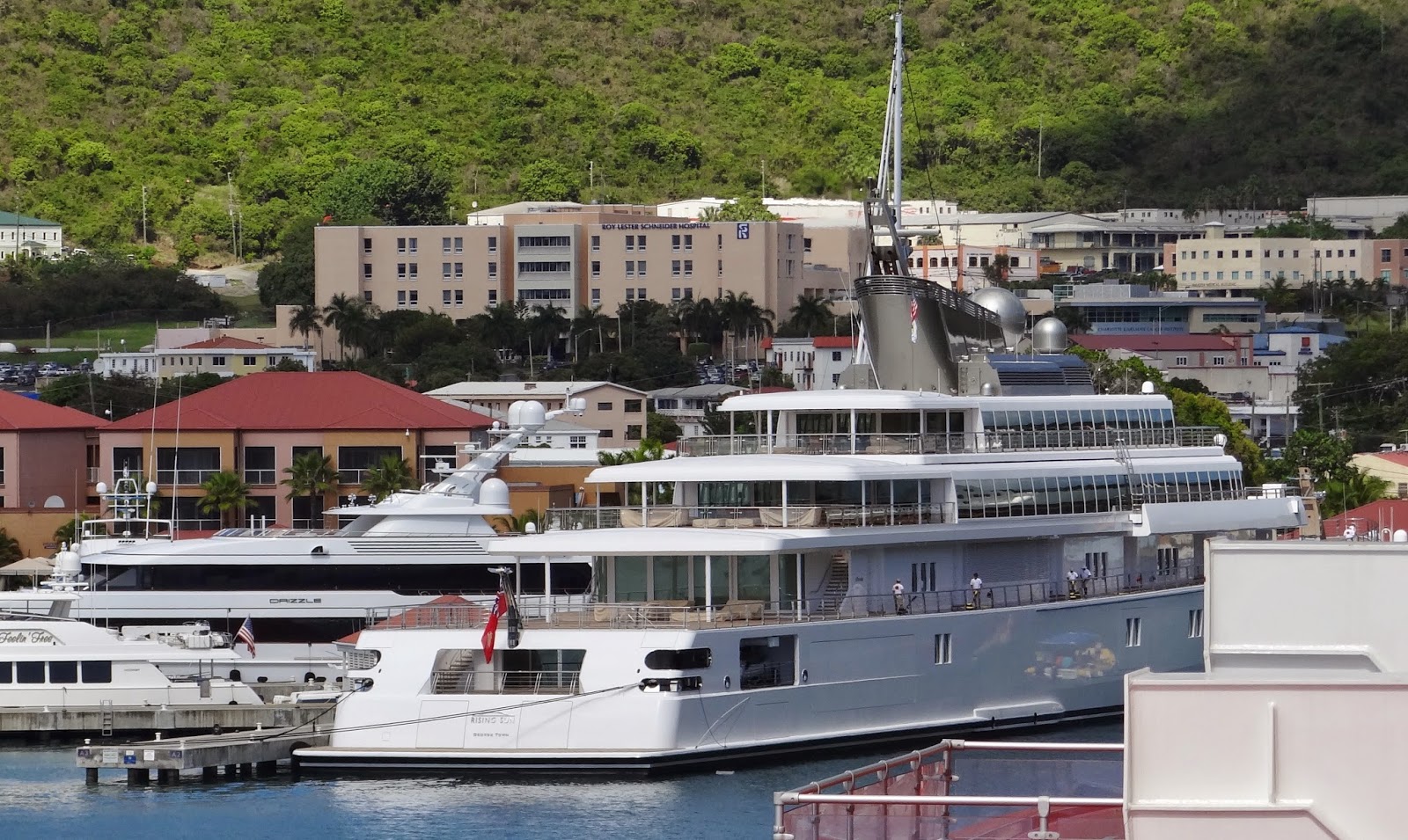 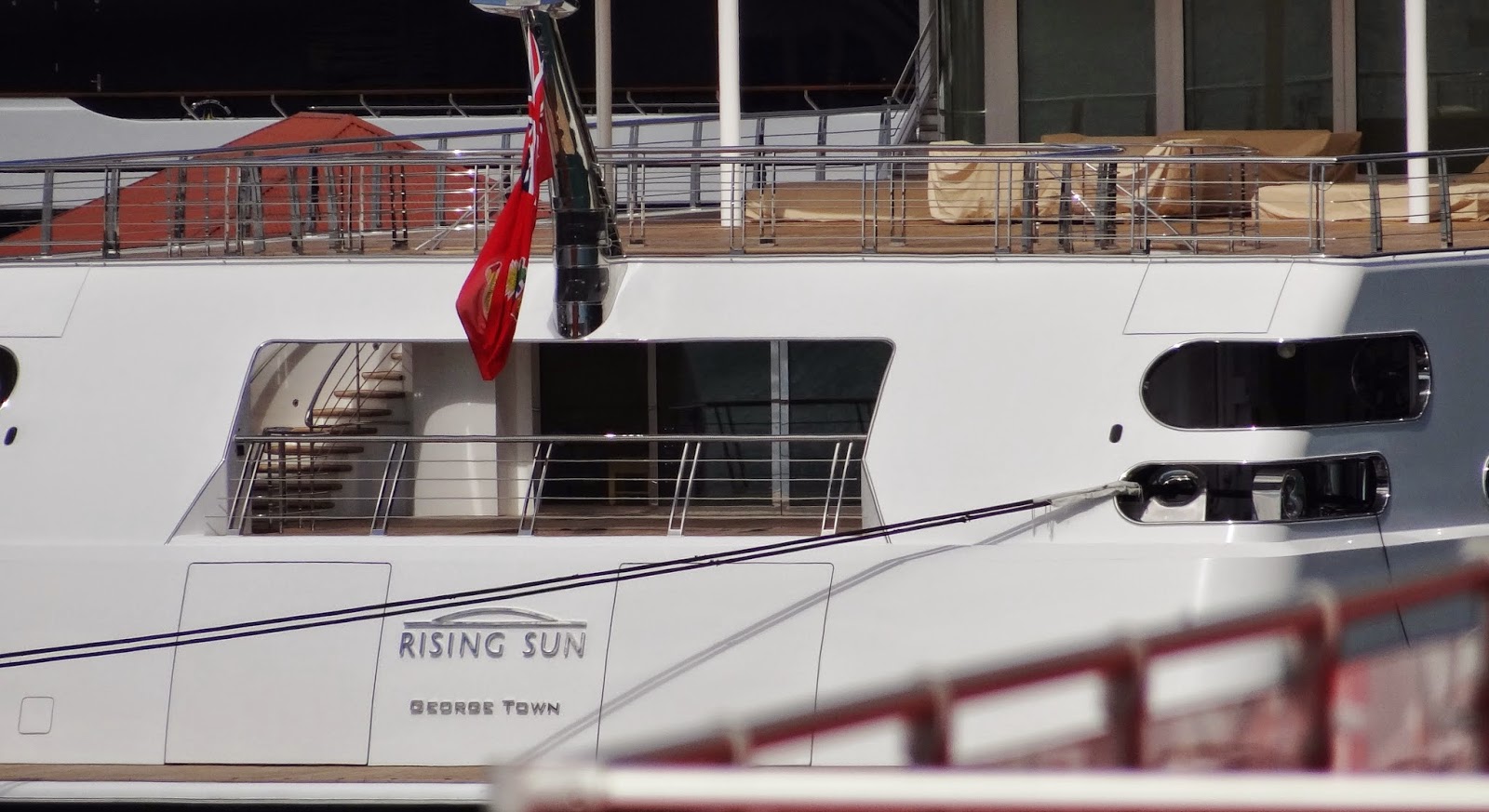 There's loud drunken hollering coming from Señor Frogs, as usual.  And did I say it was HOT? 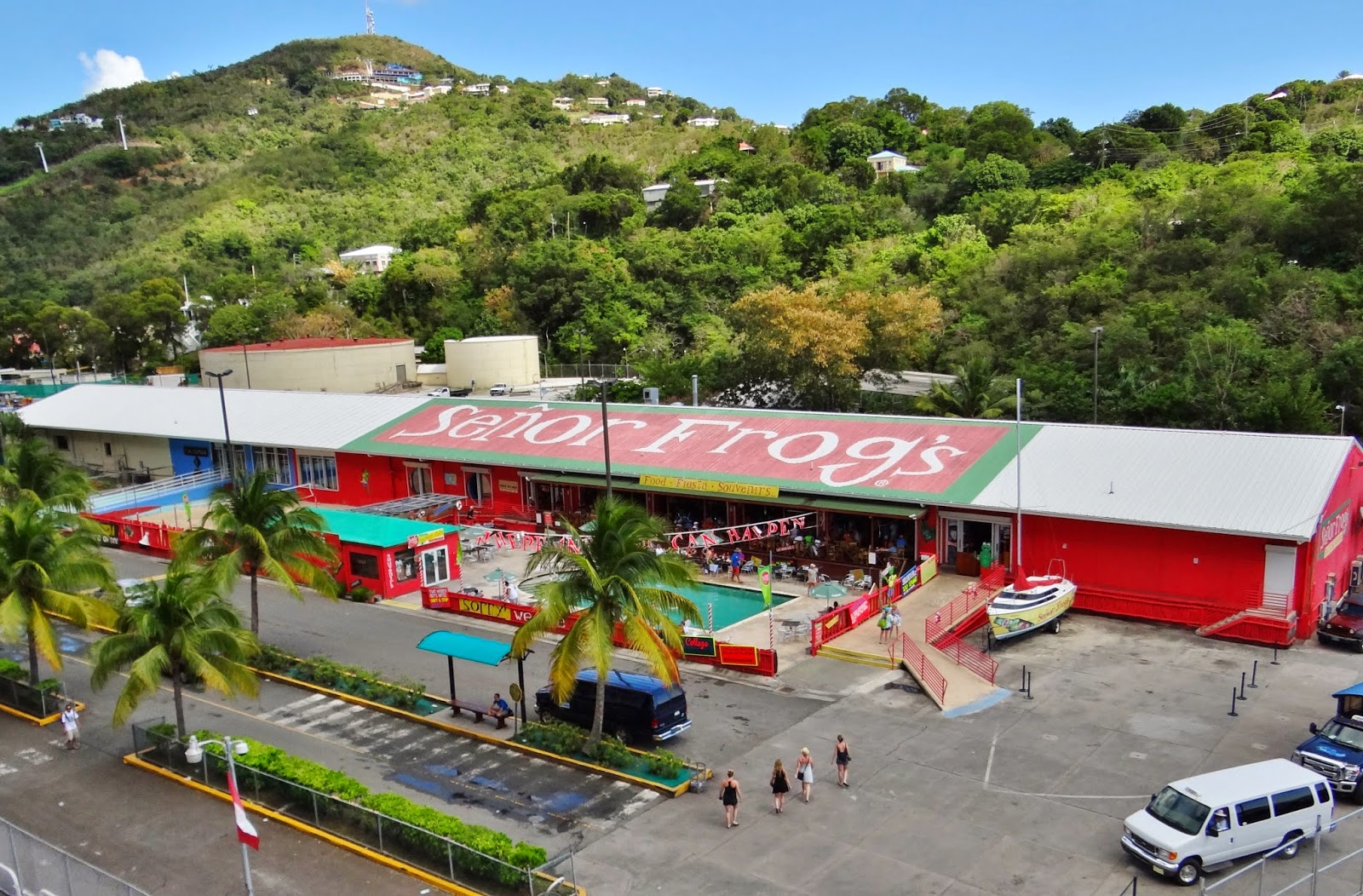 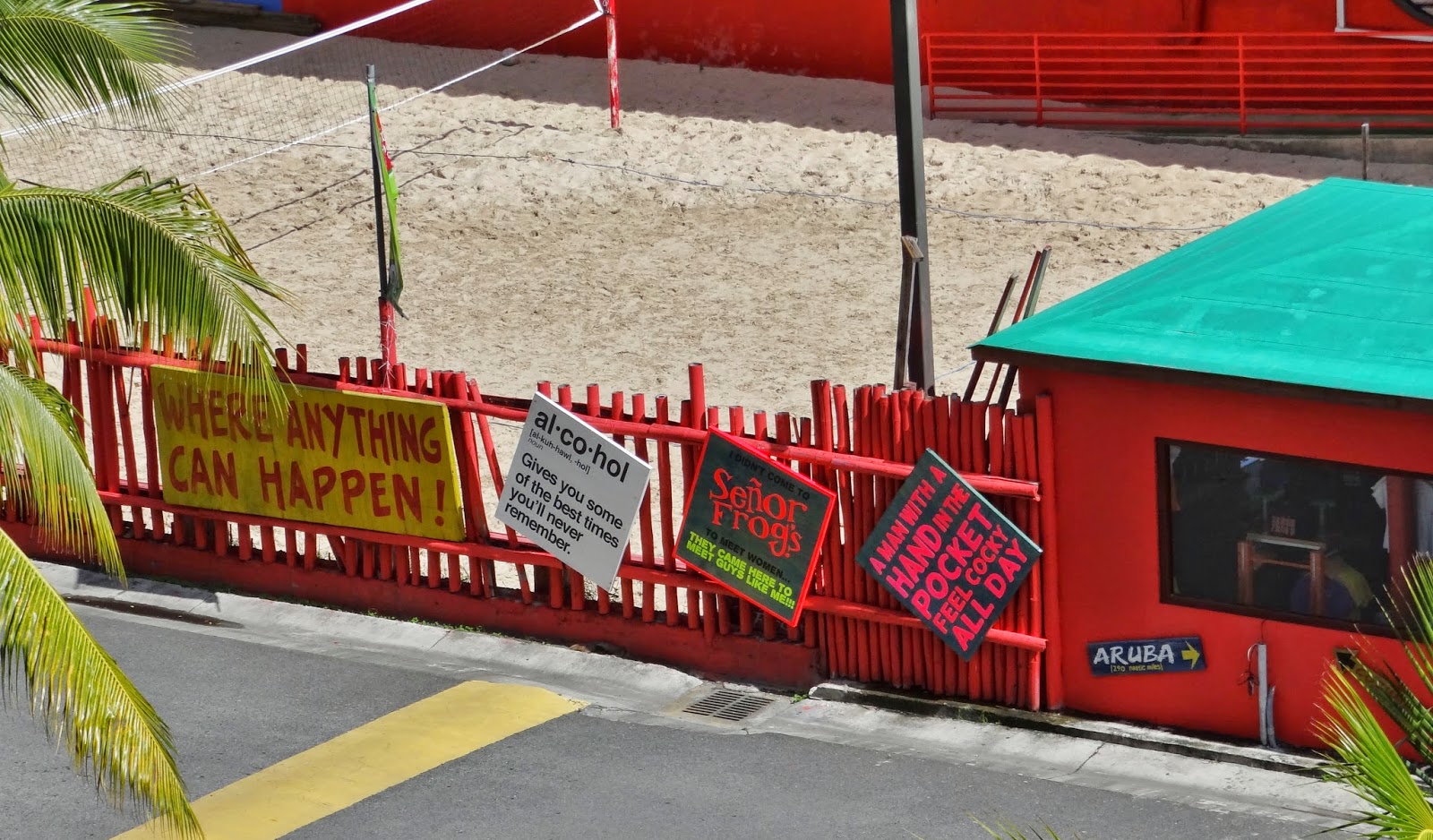 So today, day 5, they finally declared "quiet zones" in today's program. I found a few hours of blissful peace in the lounge area outside 2 of the alternative restaurants (Moderno & Cagney's on deck 8).  Later, I found a table in the shade out on the waterfront during sail away.  There was a cooling breeze.  I stayed there until long after we set sail; & I finished my nautical spy novel. 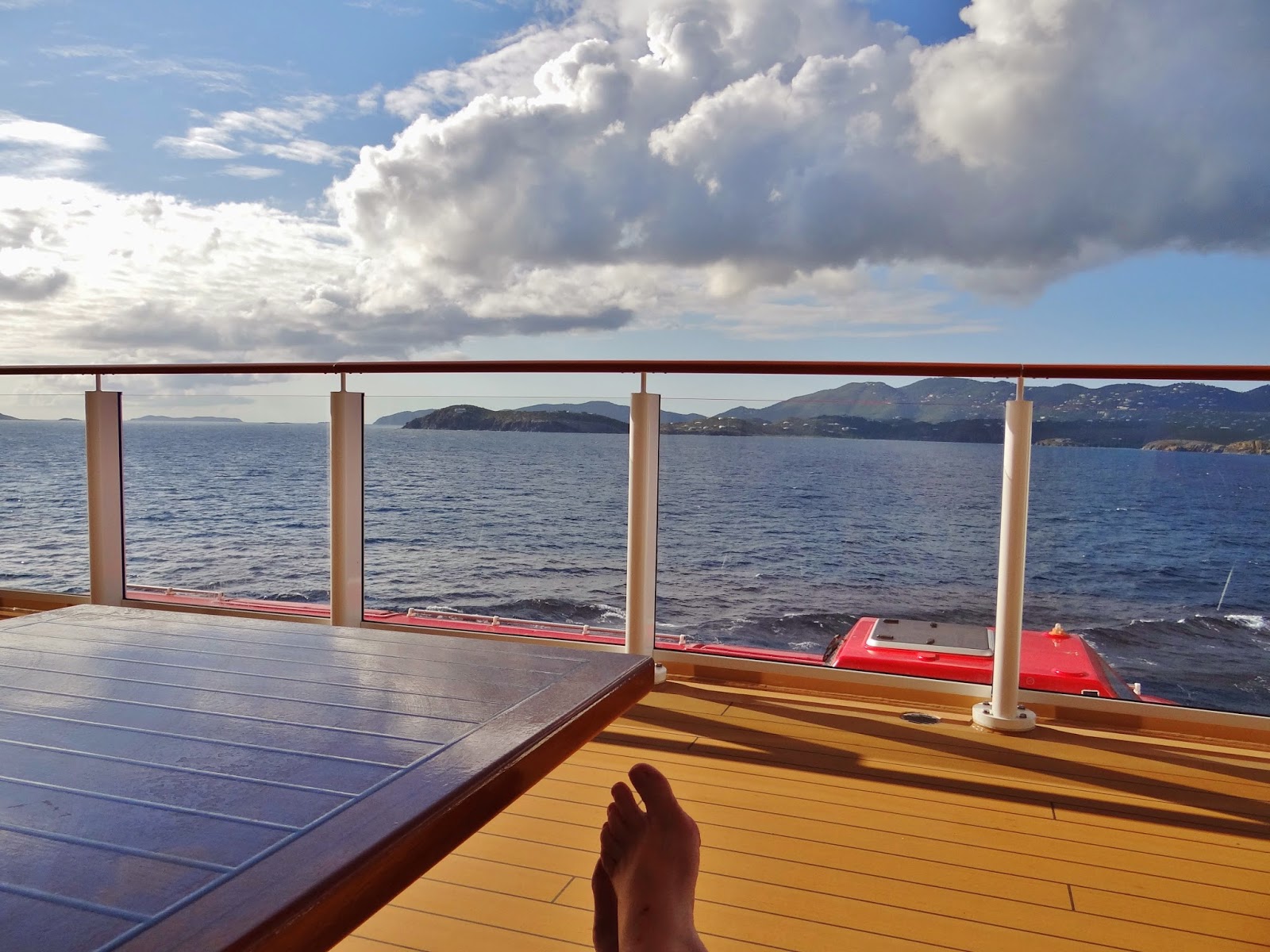 The always present Coast Guard escort in & out of port 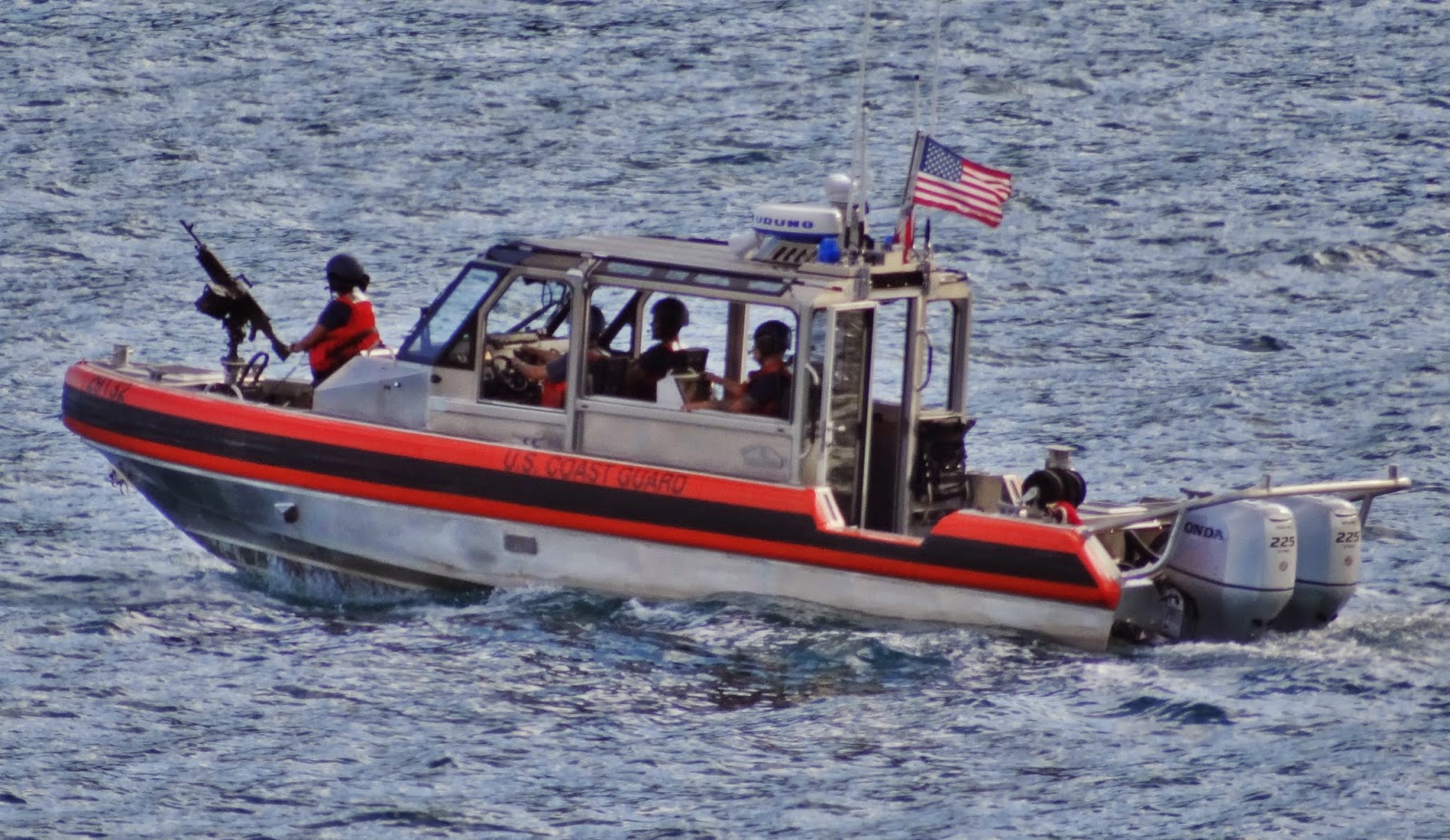 I felt a little crusty from the salty air.  I was afraid if I went down to clean up, I might not get back out for dinner.  So, I texted Lou to let her know I was going to the buffet early.  She liked the idea of calling it an early night; so she came right up.  Guess we're slow learners......we realized that it's much quieter at the very aft section of the Garden Cafe.  There's nearly a 180* view from there; & we watched the Disney Fantasy following us, as they've done just about every night.

Everything I tasted tonight was a winner.  Two cold salads: white beans with roasted red peppers, andouille & chorizo sausages and marinated asparagus with red onion.  My main course was medallions of veal scaloppine with a blue cheese sauce; stir fry of garlic, soy beans, green beans, bean sprouts & rice;  and an asparagus & broccoli casserole with baked Brie topped with sesame seeds.  That casserole was without a doubt the best thing I've had all week.  We sat & talked a good while; but we were ready to give up the ghost by 9. 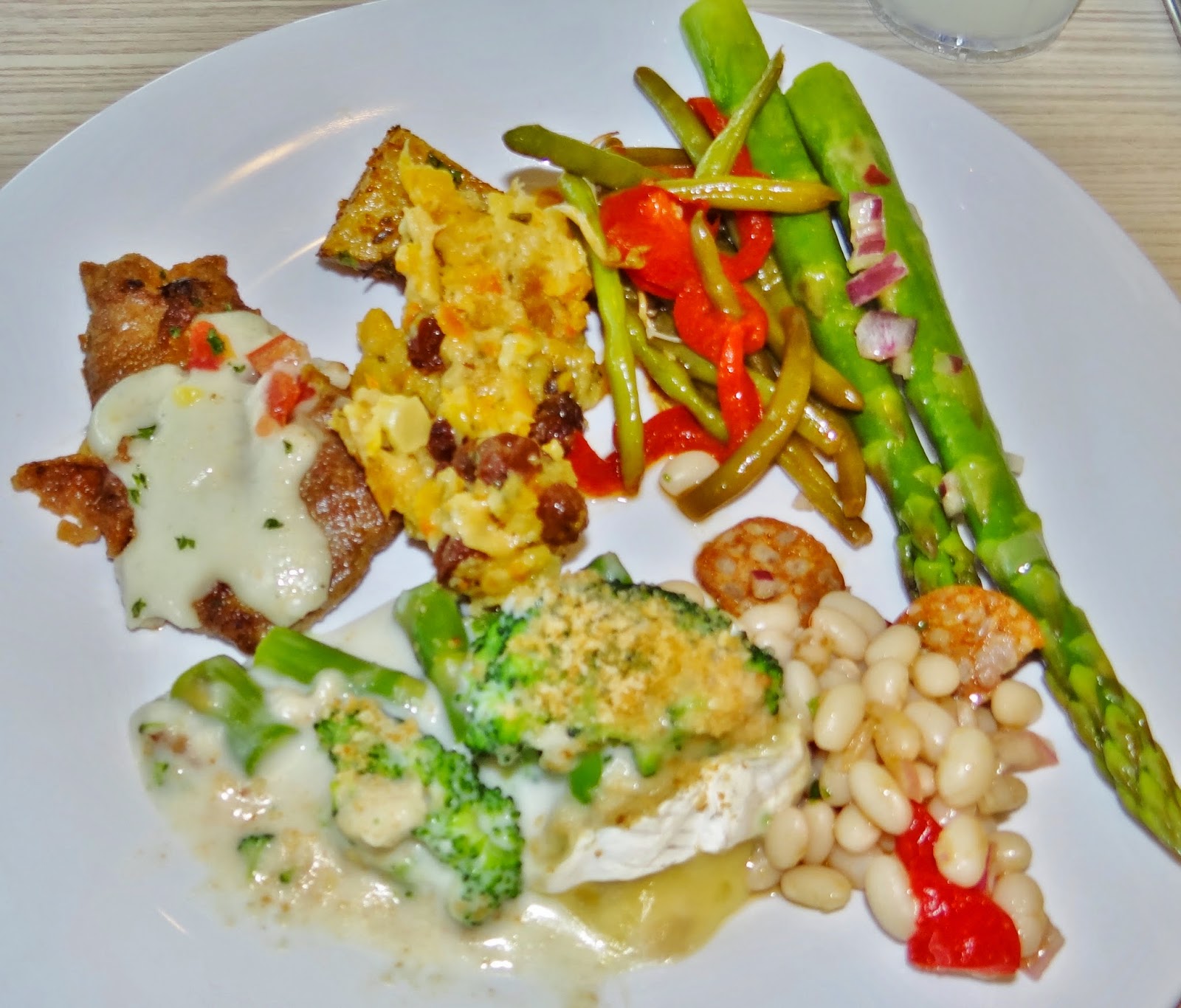 I really intended to shower; & then start another book. I just couldn't muster the energy.  I must have dozed off the min. I laid down.  I woke up a short time later.  But rather than reading, I opened my "window shutters"; & just laid there watching the accent lighting from out in the hallway change colors.  Turned on the rain (sound machine) app on my iPad; & soaked up the quiet.  I was out in minutes. 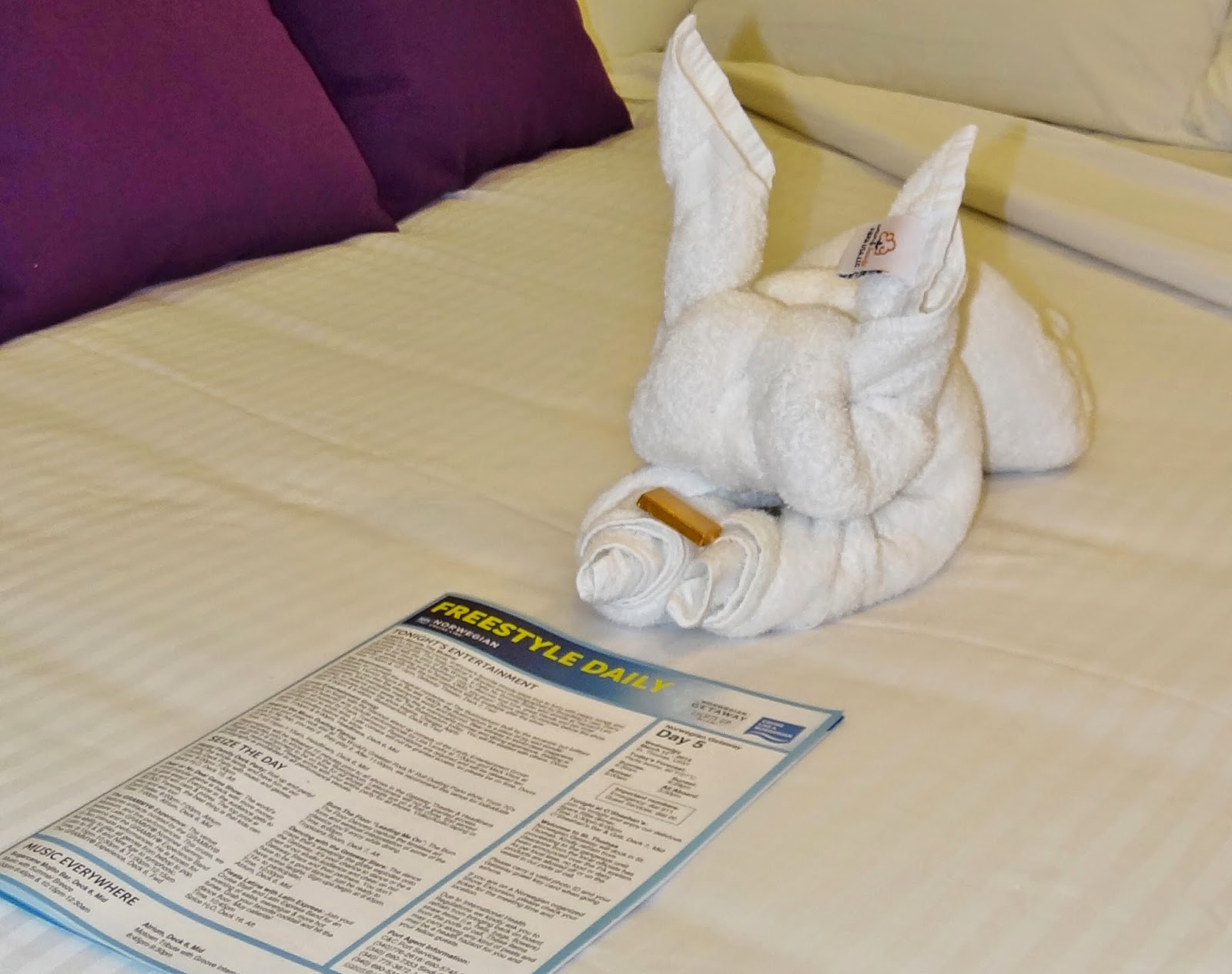