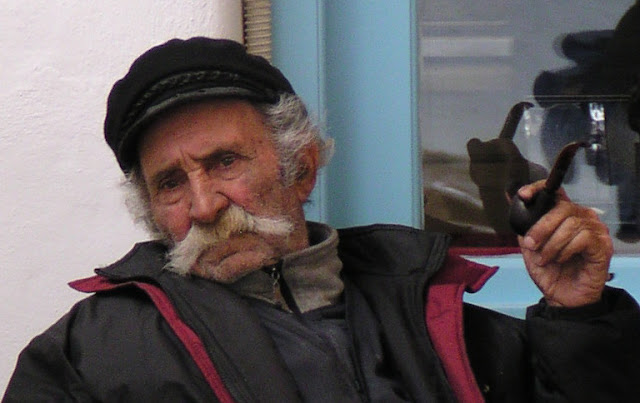 
Katie set the alarm so she could fit in all her work out classes this morning (walking, stretching, yoga & fitness ball). While she was working so hard, I slept a little longer & had the buffet breakfast. At 8 in the morning we anchored off the island of Delos. Obviously, not much here but a "few more rocks". So we stayed onboard. 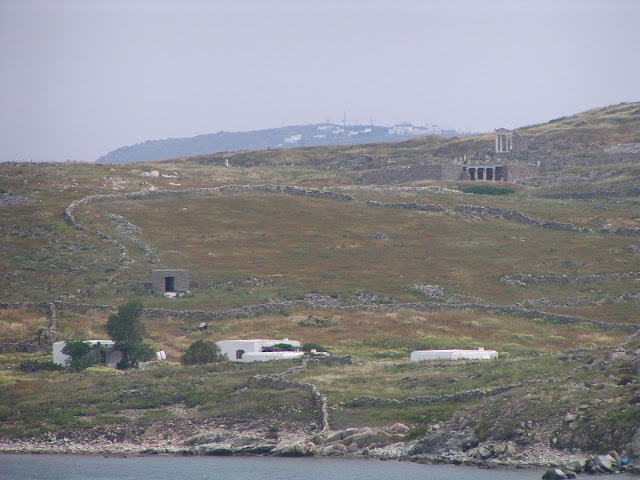 There was a little sun peeking through, yet it was quite cool & started to rain just as the last tender arrived back at the ship at noon. It took 1½ hrs to sail the short distance to the island of Mykonos. By the time we arrived at 2 it was pouring rain. The ship changed their mind about providing free transfers into town; & we ended up having to pay $20/pp. A lot of unhappy people. Even w/ the rain it should have cost a lot less, if not complimentary. Last time we were here at this same dock, Orient lines provided free transport. Oceania is supposed to be a lot classier than that. 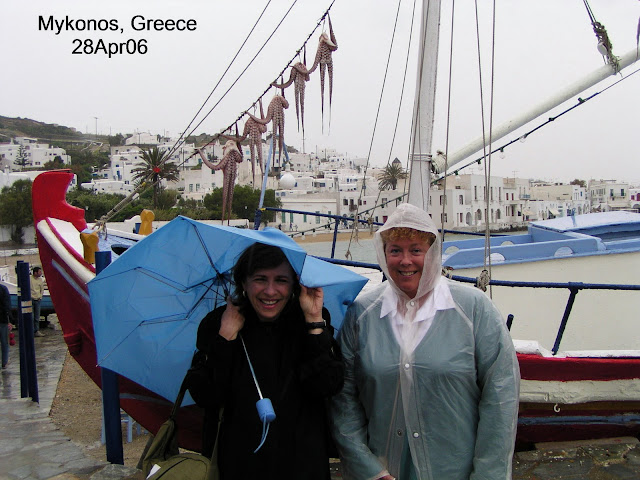 So, w/ raincoats & umbrellas we made a mad dash to the bus; & then walked the rest of the way into the Little Venice area (at the eastern tip of the island). We did make note that at no time did anyone official ask to see a transfer ticket or any other proof that we had bought them. Hmmmmm. It did eventually stop raining; but remained very windy & cold (I'd guess low 50's). 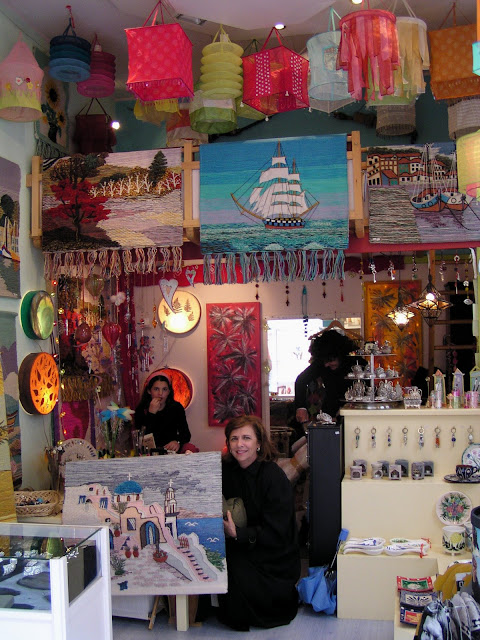 Right away we spotted this small shop that had lovely woven wall hangings depicting scenes from the Greek Islands. We couldn't resist (although I will probably have to take something down to make room for mine).


We found a few familiar streets from our last visit. We stopped in to say hello to the folks at the Hermes Art Gallery where we bought a few objets d'art a few yrs ago. After that we just wandered, got lost, saw the same things over & over. 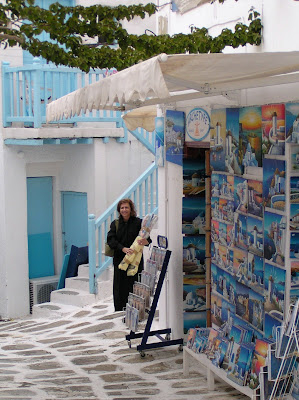 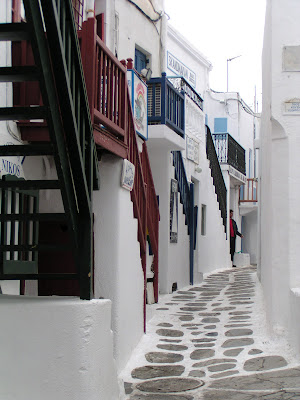 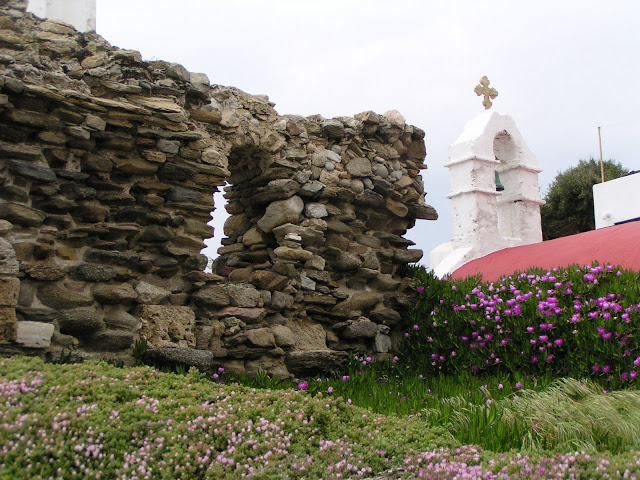 We did happen upon Jackie, Phil, Elaine & Nate having lunch. 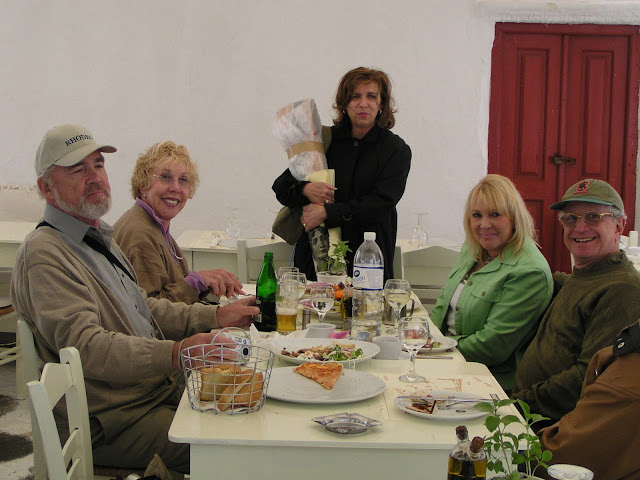 We also ran into Eileen & friends while she was following one of the pink pelicans (nicknamed "Petros") at an outdoor cafe. 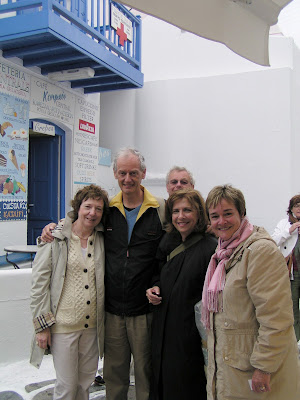 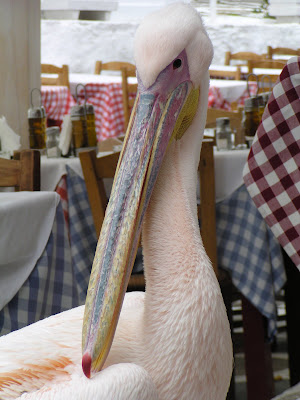 Three hrs later I'd had enough; my flats were bothering my toes; & I was cold. I was not a happy camper. We had a hard time finding our way back out of that maze of unmarked streets to find the bus stop. It started raining again just as we pulled up at the pier at 6:30. Another mad dash to the gangway. Katie wanted a drink; & I wanted hot chocolate. We settled in at the Grand Bar; & struck up a conversation w/ this delightful woman, Marion Davies. She's a former opera singer, co-star on the Benny Hill Show & backup singer in the "old days" for people like E. Humperdick, Tom Jones & Neil Diamond. She now lectures onboard on everything from the life of Jackie O., to the Medici Dynasty in Italy & her friendship w/ Benny Hill. We spent about an hr laughing & learning from her. Her 2nd home is in Venice; & she's preparing a list of restaurants for us to try while we're in town. 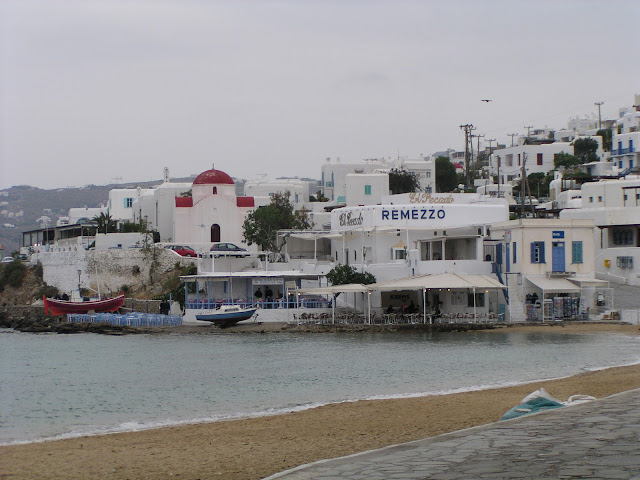 Now that our shower has been fixed (well, sort of), I finally warmed up w/ a very hot & (slightly more) powerful shower. We had reservations in the Polo Grill at 9 pm (only time we could get in). We had to share a table w/ a nice couple from Englewood. What a fabulous meal it was. I had escargot in a cream sauce served in a bowl made of phyllo pastry. Katie had jumbo prawn cocktail, which I swear were 5" long. We both had a dreamy lobster bisque w/ chucks of lobster & a drizzle of cognac. Katie had the best Caesar salad; & I went for the more traditional salad so I could have more of that awesome blue cheese dressing. We both had buttery tender filets w/ sauteed mushrooms & bernaise sauce. Yummy creamed spinach, real lumpy garlic mashed potatoes & steamed asparagus on the side. With after dinner coffee, we didn't finish til after 10:30. We were so tired (& stuffed) we could barely make it through the day's photos on the TV. It was a shame that the weather didn't cooperate today; & I'm glad that we have the memories of that picture perfect day here 3 yrs. ago. But Mykonos is still an enchanting place even in the drizzling rain.