The Regatta at anchor off Santorini, Greece 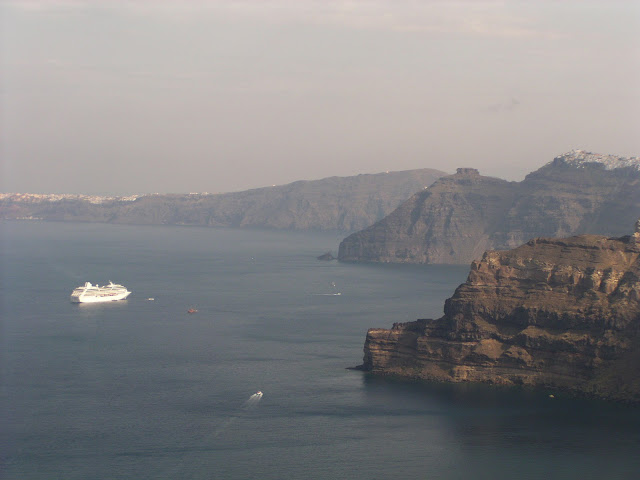 We were cautiously optimistic when the sun was trying to peek out this morning upon arrival in Santorini. But the day turned out to be spectacular. Nice breeze, pleasantly warm & that perfect blue sky you see in all the photos. Got off to a rocky start though. Katie filled out the continental breakfast form last night; but she failed to tell them what time to bring it. So, no breakfast came. Good thing Katie had some leftover filet mignon on a roll from last night's dinner. Then we found a notice on the door stating that the tour to Cape Sounion that we'd booked for tomorow in Athens had been canceled (again due to lack of participation). Are we lucky, or what? 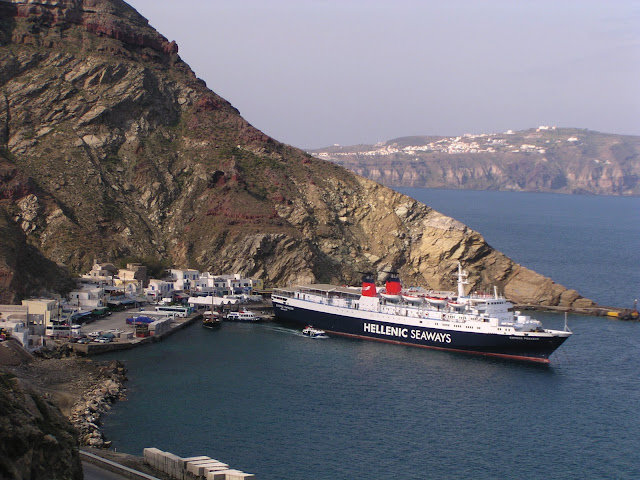 We did a half day tour today that took us to Fira & Oia (pronounced EEE-ah). Although the ship was anchored in the caldera off of Fira Town, we were tendered quite a long way to the town of Athinios. From there we were taken by bus up the winding roads to the top of the island for a quick stop at the Mt. Profitis Ilias Monastary. 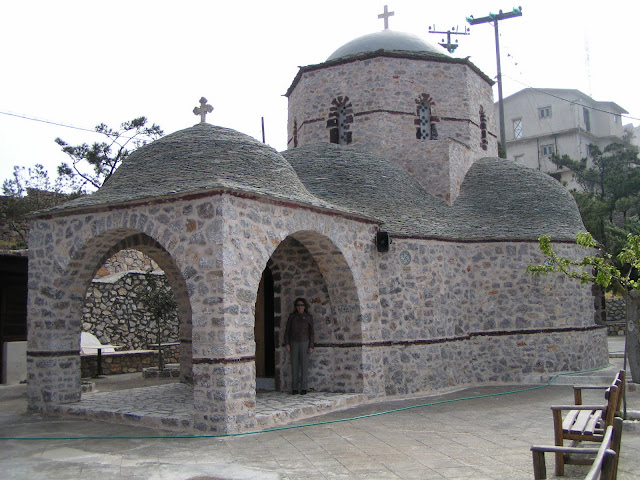 A quaint stone building complete w/ priests in flowing grey robes & a cat chasing bugs on the patio. There were slopes of vineyards going down to the flatlands to the waters' edge. Wild daisies & bright red poppies dotted the slopes. We then proceeded to the northeastern tip of the island to Oia. 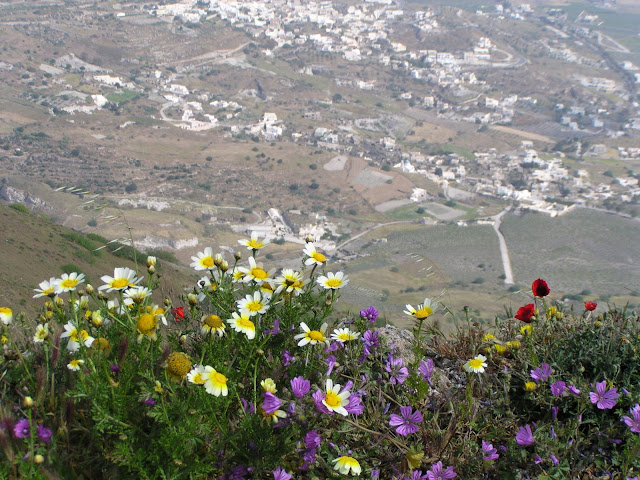 This is the place you most often see in all the photos advertising Santorini. Built on a steep slope, there are bright white houses & shops trimmed in gorgeous pastel colors hanging from the cliffs. Little narrow cobbled streets that wind in & out of little crevices that have all sorts of neat places hidden within. We had 1½ hrs to explore on our own before the bus took us halfway down the cliff to Fira. 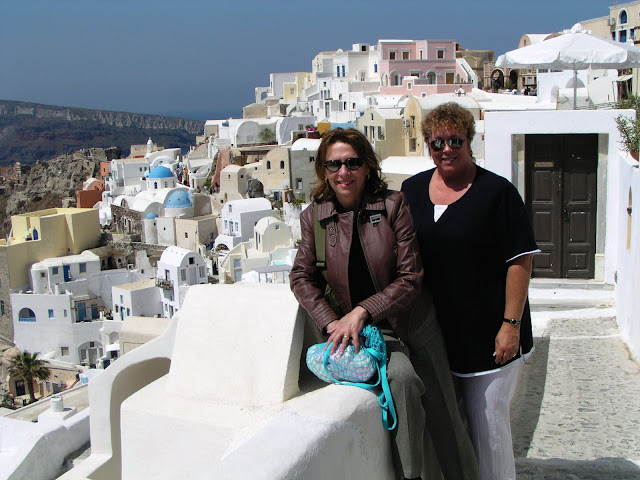 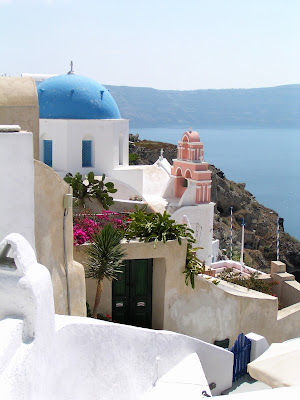 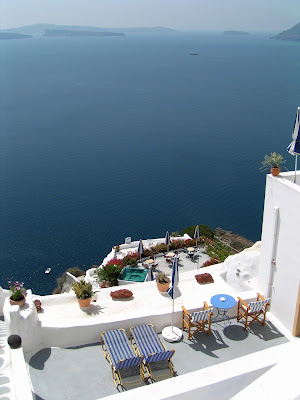 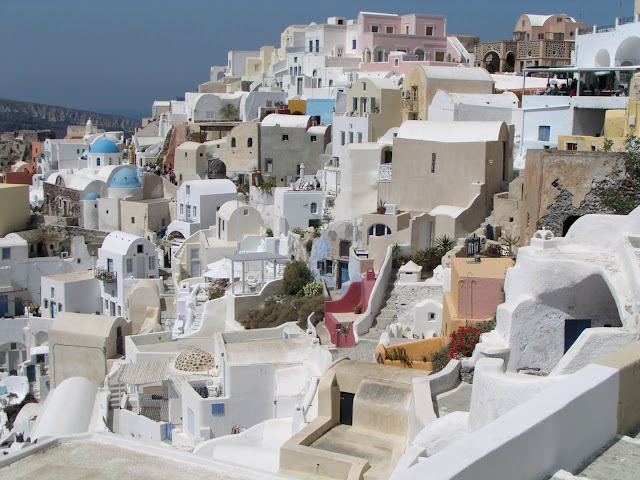 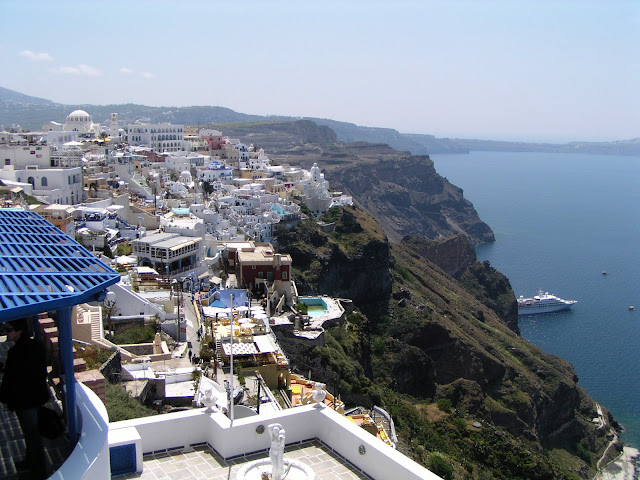 Lots of shopping & restaurants. I saw an ATM; & decided to see if I could get my card to work. We desperately need Euros. It still rejected my request. What could be going on? We did a little window shopping on our way toward the funicular, which would take us the rest of the way down to the tender pier. 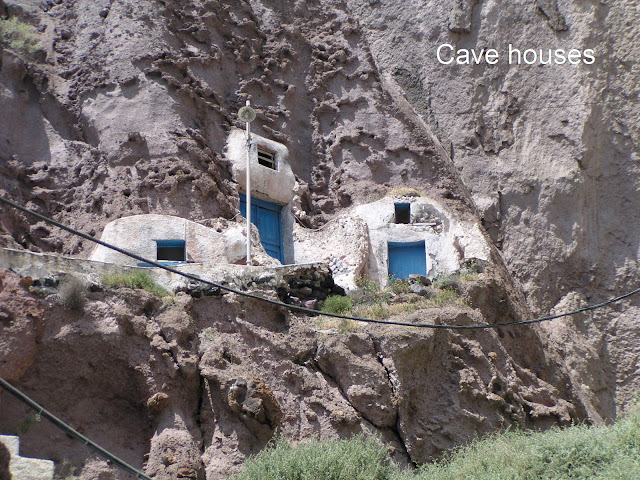 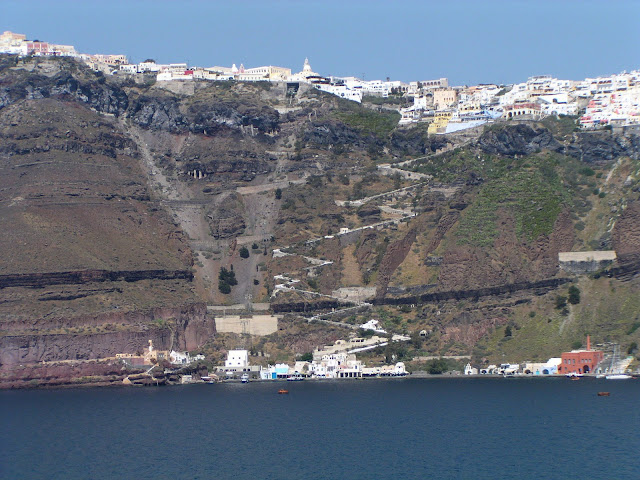 Back at the ship we were too late for the buffet lunch, so we had to eat at Waves (the poolside burger joint). Katie got some grilled chicken & made herself a salad entree. I made a salad & had a so-so grilled pannini. Katie went down & was able to sign up for a different tour for tomorrow that will also take her to Cape Sounion (as well as a half dozen other places she went to last time). She then spent about 20 mins in the sun; & visited the personal trainer for a body workup. He's created a workout regimen & vitamin program for her to follow at home. My afternoon was spent on the cell phone trying to find out what the hell was going on at Bank of America w/ my debit card. I kept losing the signal, getting put on hold, transferred from dept. to dept. Grrrrrr....They say they've put a fraud alert on my card because some place back home where I use the card has had a security breach; & supposedly my card info has been stolen. In essence, access to my account has been frozen! They told me the same thing they told Katie. They would like to issue a new card & send it to us. Since that's not possible (for the same reasons we couldn't get one from Katie's bank), they've told me to call back tomorrow when we arrive in Piraeus. If I can find an ATM that takes my type of card, they'll try to find a solution for me. Isn't this a bitch? I'm so upset; that if I were a drinker, I'd be drunk right now.

We opted to eat at the dinner buffet instead of the dining room. Katie created her own pasta dish w/ onion, garlic, chili flakes, herbs, black olives & spaghetti. I had a huge slab of prime rib w/ bernaise sauce. We had the same appetizers; escargot in a cream sauce, thin slices of baby eggplant & cheese stacked & grilled (simply orgasmic) & salad. Katie rushed off for her 8:15 facial; & I stayed to have dessert. Pear halves w/ warm chocolate sauce w/ another white peach sorbet chaser. I was stuffed; & she was a worthless slug when she got back to the cabin. It was a struggle to get through all the day's pictures before going to bed at 11:15.
Posted by Unknown at 6:25 PM