Katie had 3 fitness classes before noon; I laid around a while.  I hadn't slept w/ my bar of soap under my sheets this entire trip; & it finally caught up w/ me.  I was jolted awake w/ a really bad cramp in my right thigh.  When you try to stand up straight it only gets worse.  When I did get up, then the left one started.  Just when you think it was going to ease up & you tried to straighten up, it only got worse.  All you do is cry & slap your leg.  If this happens at home, I've learned that rubbing alcohol helps a lot.  But I was not going to call the Dr. to bring alcohol to the cabin!  After about 20 mins. it finally subsided  The soap is going under the bottom sheet tonight, for sure.

The Capt. had predicted cloudy skies w/ a chance of rain; but this morning turned out only partly cloudy.  This was fortunate since the passage into the Bay of Kotor is so spectacular.  Not knowing the timing of this, I had unfortunately scheduled a facial at this time (actually the 2nd of the 2 part facial I'd started several days ago).  I made Katie promise to take the camera upstairs after exercises.  During the facial, Lina was nice enough to prop the table up so I could see the passing scenery.  It was indescribably beautiful.  It looks like pictures I've seen of the Norwegian fjords. 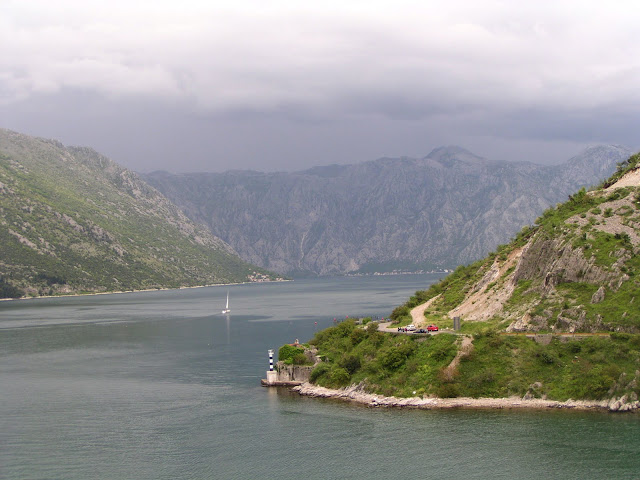 We cruised slowly very close to shoreline.  We passed many small towns where the resident's were on the waterfront or hanging out their 2nd story windows waving flags, sheets or whatever to get our attention.  It was so still in this large bay; the scenery so remarkable.  The Capt. would blow the ship's horn; & they would respond by ringing the church bells.  It brought tears to mine & several other people's eyes. 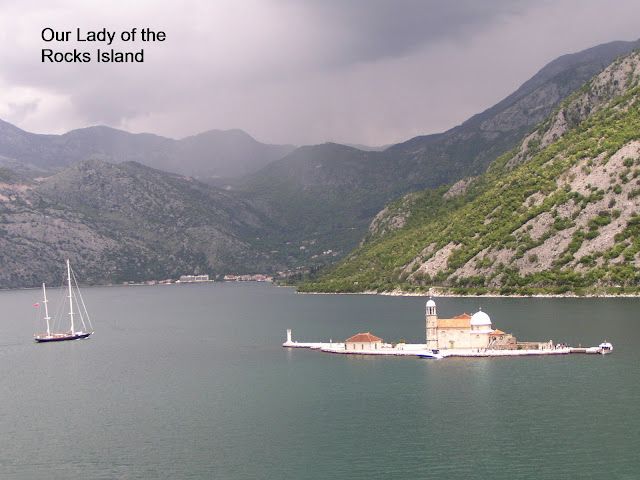 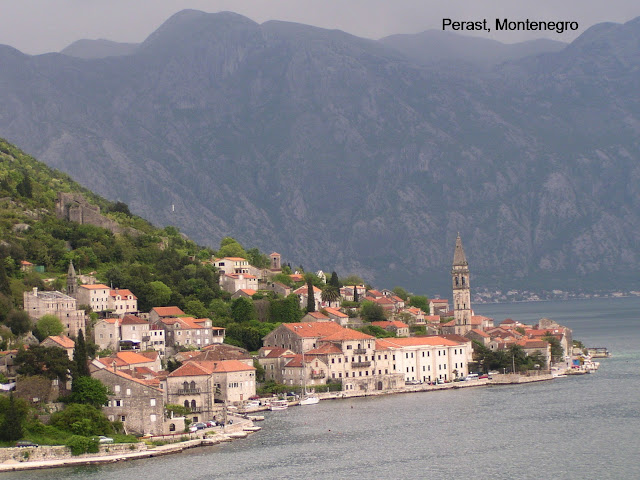 As we were approaching Kotor (1:30), the skies got very dark.  Just after we made it back inside, the bottom fell out.  It poured while we were having lunch in the Terrace Cafe.  As for lunch, Katie had pizza, beef kabob, carved ham & a combination of cold salads.  We both had the split pea soup.  And I had my afternoon dose of blue cheese dressing (w/ a little salad on the side), pizza, deep fried fingers of monkfish & some so-so jambalaya. 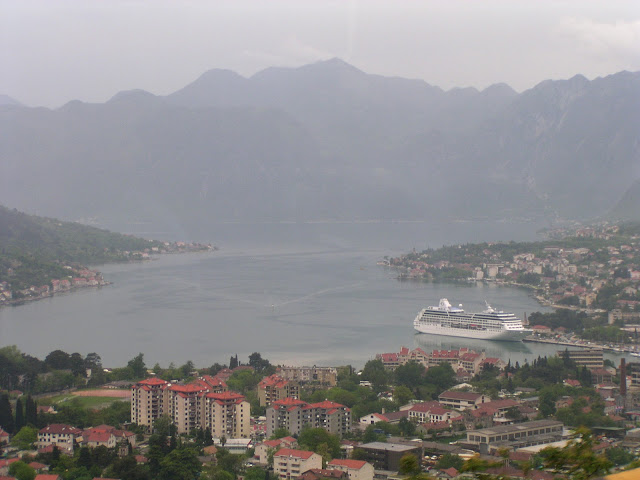 Today's tour was to take us (southwest, I believe) to the small towns of Sveti Stefan & Budva.  Once we left Kotor, the rain let up some; but it remained cloudy, cool & damp the rest of the day.  Our first stop was the resort "island" of Sveti Stefan.  Originally, it was an island connected by a sandbar to the mainland.  But over time, the Adriatic has receded; & there is now a stone walkway that connects the island to the mainland.  The "island" is like a mound made up of a maze of streets that are home to 2 small hotels, a casino,some private homes w/ stores & restaurants. 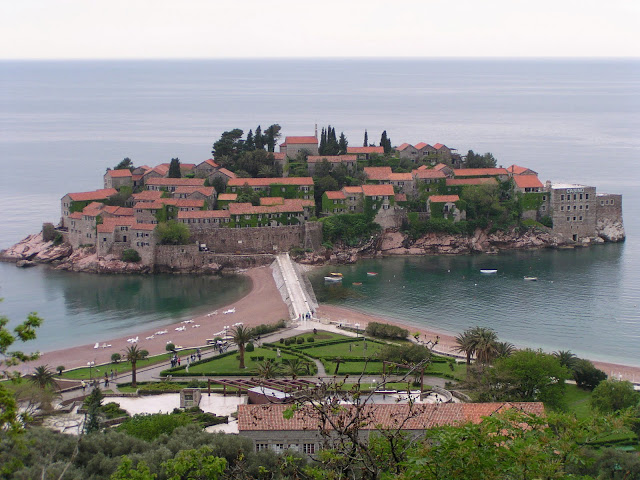 Everything is stone w/ either moss or ivy  clinging to it.  It's a beautiful setting.  We were treated to some delicious cake, hot tea or some unbelievably strong (& horrific) coffee at a small restaurant. 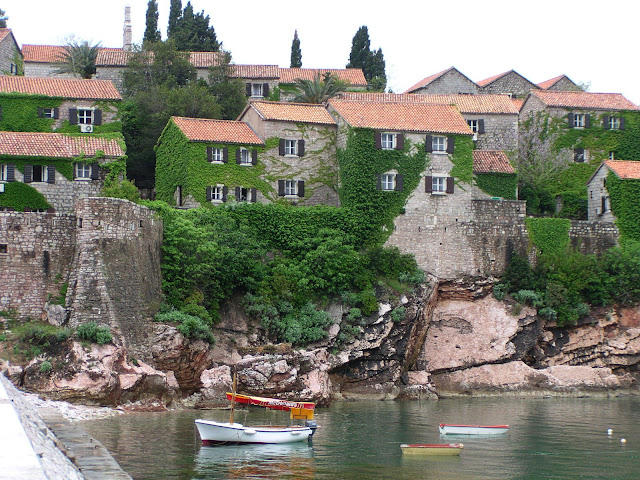 We next had a short walking tour of Budva, a larger & much more touristed resort town. Our guide, Vesna, (& driver, Goran) showed us the archaeological museum & the necropolis before walking us into the gates of it's own "walled city". What's amazing about some of these walled cities is that you're standing in what appears to be the city itself. There will be a very high wall; & when you walk through the gate, you discover a smaller & much older city within. They have a lovely waterfront area here, lined w/ bars & cafes. We had a little time to wander around. But close to the end of our time there, we sat down at a sidewalk cafe to just soak in the scenery. I had the best cappuccino. 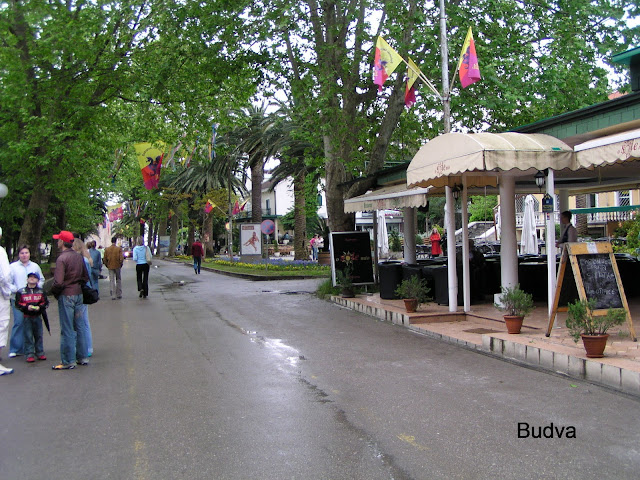 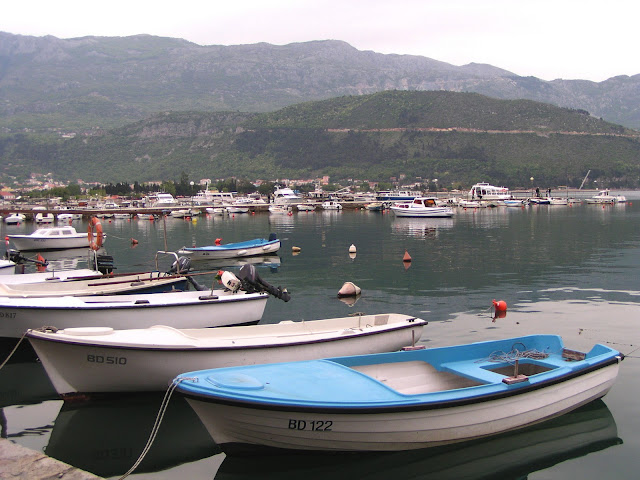 The sun was trying to break through as we arrived back at the port of Kotor at 7 pm.  Since we had some daylight left, we went into the walled city to look around for a while.  The area was teaming w/ people gathering for drinks & dinner in the many sidewalk restaurants. 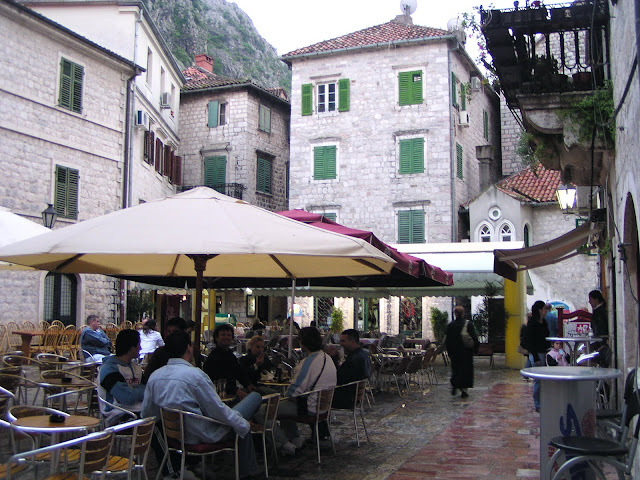 We boarded the ship at 7:45; dropped off our stuff in the cabin & then went up to Horizon's Lounge for a drink. We had a great view of the city walls as they snaked their way up to the top of the mountain & back down. As it was getting darker, the wall was illuminated by spotlights at certain intervals. Quite beautiful. 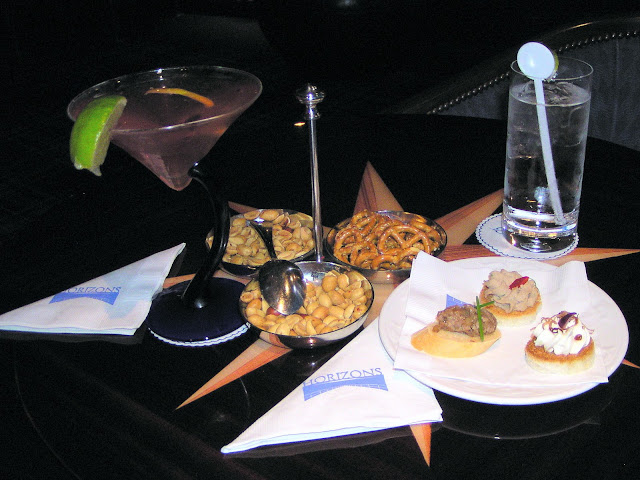 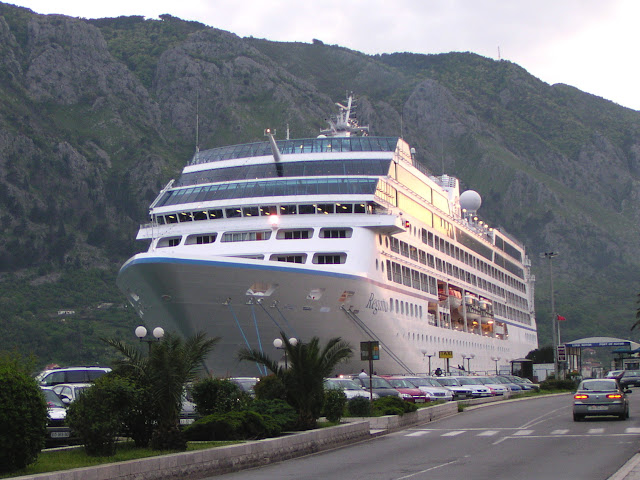 We decided to eat at the dinner buffet so that we didn't have to get redressed for the D.R.  We had a fabulous cream of corn & chicken soup.  Katie had Caesar salad & turkey from the carving station  For dessert she had fruit & cheese followed by blackberry sorbet.  I had the cold, creamed escargot again; & tried venison for the first time.  It tasted a lot more like beef than I expected.  Maybe the sauce they served it w/ toned down the "gaminess" I had anticipated.  And I had to visit the pasta station for more of my "signature" creation.  Thoroughly stuffed, we went back to the cabin to look at the day's pictures.  I took the digital cards down to the photo shop so that they could download them to a CD.  I'll still have to do a lot of editing when I get home (& after I finish watching all the videotape waiting for me).  Katie was beat; & was asleep by the time I got back to the cabin.  We have another early morning tomorrow.
Posted by Unknown at 7:55 PM