Active excavation is visible right in the port area of Rhodes Town, Greece. 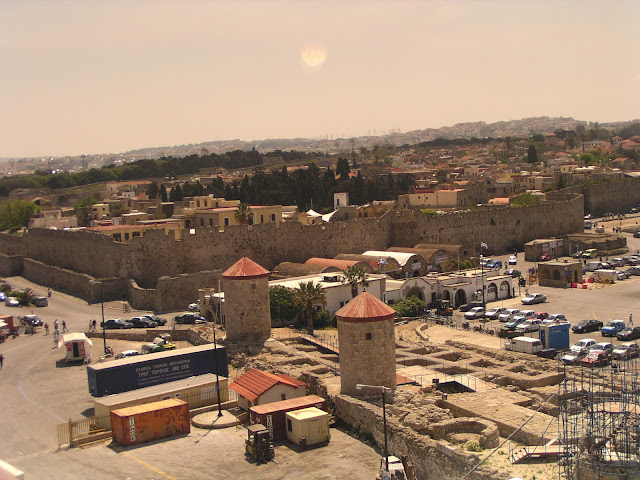 A quick buffet breakfast then off on our 4 hr. tour from Rhodes Town to the ancient city of Lindos. The day was partly to mostly cloudy, temps maybe in the mid 60's. We took the road that runs not far up along the NE coastline. Several areas of resort hotels w/ fairly nice beaches (although they are very brown & appear somewhat rocky). After about an hr. we arrived at Lindos Town. A short winding walk down to the Plaka (square). 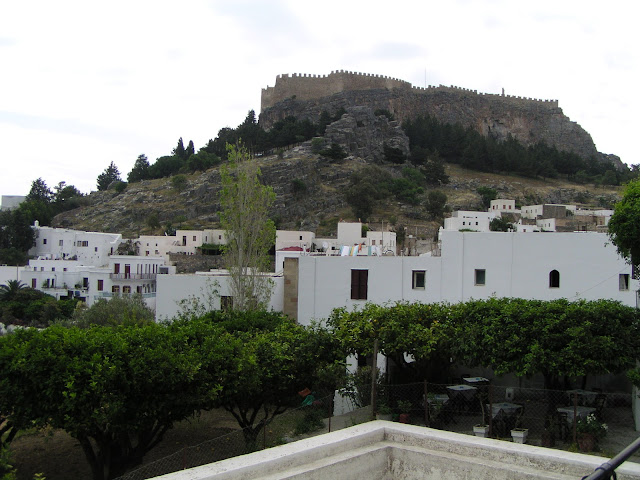 From there narrow rock paved alleyways lined w/ shops & restaurants climb up to the Acropolis. There are over 300 very steep (& sometimes slippery) steps to the top. The guide said "we'll take it slow & easy" (& if you believe that....). She did make 2 very brief pauses for us to catch up. There were several who opted for the donkey ride that took you almost to the top. 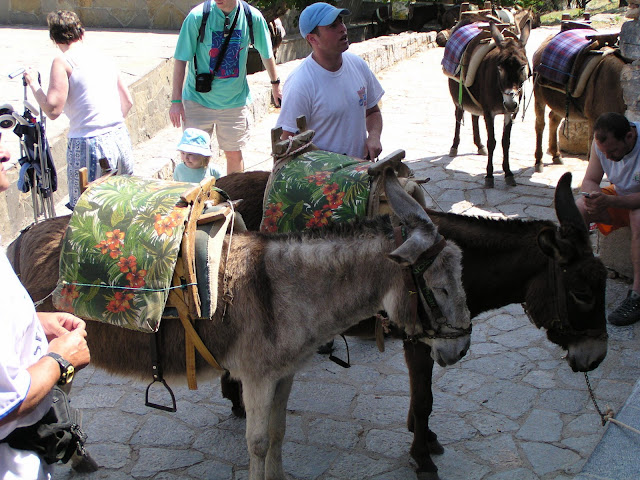 A few of our group used canes; & I don't know how they made it. The climb was fairly brisk (IMO); & I thought I was gonna die! Katie was leading the pack (of course); & I barely had enough breath to yell & get her attention. I wanted her to take the camera the rest of the way up. I was prepared to wait there for the group to return; but after a few mins, I proceeded & eventually caught up w/ the group at the base of the Acropolis. 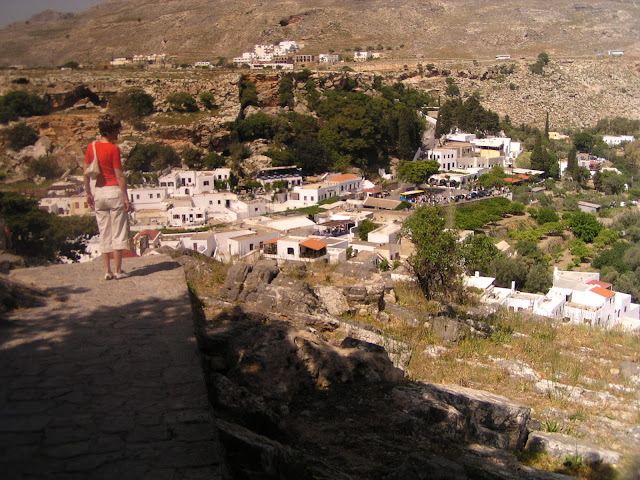 (The guide said be careful up top because there are no railings.) Katie kept saying, "Keep goin', it's good for you". So I forged ahead (cursing all the way) just so I could throw her ass over the edge! Although it was pretty cloudy the view was nice. Am I glad I went? Maybe, after all it was just another bunch of rocks, a few carvings in the wall & a group of columns. (By now, they're a dime a dozen.)

At least it was easier going down, giving us a chance to admire all the colorful shops. There was everything from local women displaying their tablecloths draped on the rocky slopes along the path to colorful pottery & fine jewelry shops. 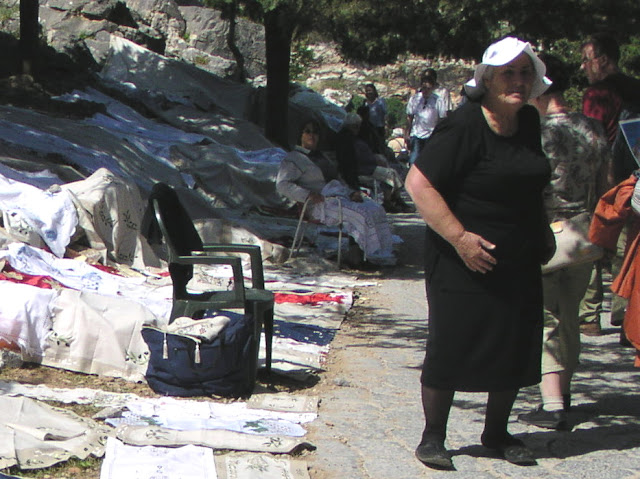 I was fascinated by the intricate designs on the pathways & floors of the shops that were created out of black & white lava stones. We passed a place where they were carving lamb for gyros; & it smelled so good. I had been craving one the whole time we were in IST; so I got one to go. Katie gravitated to the mushroom pizza she saw in the Plaka. We devoured them before getting back on the bus. 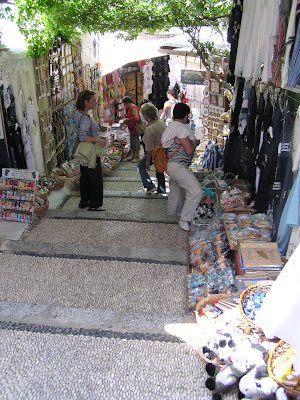 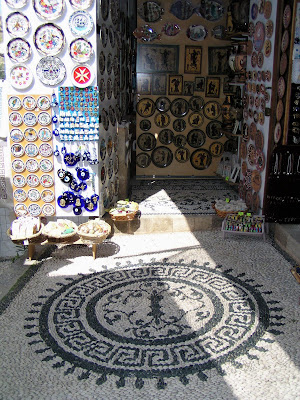 Once back onboard the ship, we had a late lunch of salads, vegetable soup & lasagna Bolognese. Katie didn't like any of it; but I thought the lasagna was pretty good. She had some delicious warm pear bread pudding. I had an 80 min. hot stone therapy massage at 4 pm. Went half an hr. early so I could relax in the Jacuzzi. The massage was good; but not as good as the one I had on Crystal. The guy did focus a lot on my frozen shoulder, which meant other body parts had to be neglected. I was shocked at how much of my butt was not covered when he worked on my lower back. So, I forced myself to get over it though. He was very professional (& I suspect gay), so what does it matter, right?

In the meantime, Katie blew off a yoga class to go get some sun until it got too cool. When the sun goes behind a cloud w/ the seabreeze, it can get downright cold. Since the slow water pressure continues to be a problem in the cabin, I took advantage of the full body shower at the spa. When I got back to the cabin, Katie was already out - up at the lounge having a drink. I got dressed; & we went to dinner about 7. It was French night; & a very good menu. We shared the table w/ 3 darling couples (one from New Zealand, one from San Francisco & one from Alabama). All were unique, funny & had led very interesting lives.

Katie & I both had escargot (the traditional way). My French onion soup was fabulous; & Katie loved her cold potato/leek soup. Katie says her lamb chops were good; but nowhere near as good as hers. My black peppered beef stirfry over jasmine rice was not nearly as good as the other "Wok of the Day" selections I've had. Our waiters were working furiously serving other tables while we sat there 20 mins. w/ empty, dirty plates in front of us. Finally Katie flagged down the Maitre 'd.; & w/ apologies he cleared the table himself. We both loved the white peach sorbet we had w/ our after dinner coffee. We viewed the day's photos; & called it a night.
Posted by Unknown at 10:50 PM