Katie got up @ 6; & I slept til about 7 (having gotten my shower before going to bed last night).  We anchored off the coast of Dubrovnik a little before 8. 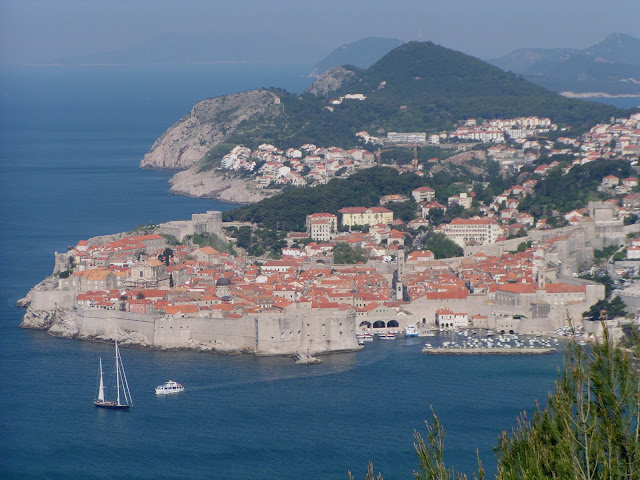 Our tour today took us in a southeasterly direction to the Konavle Riviera & the town of Cavtat (prounounced SAV-tot).  We tendered in; & met our guide, Antea, outside the walled city.  We were informed onboard that due to the arrival of V.P. Dick Cheney security would be tight at the port.  We had just started our walk through the old gated city when Antea gets a call on her cell telling us to come back to the ship; there was some sort of "situation".  We started to walk back when a few mins. later she gets another call telling us it's okay to proceed w/ the tour.  We later learned that the ship's paperwork wasn't "in order"; but it was straightened out right away.  We boarded our bus & started our 45 min. ride to a small town in the Konavle region called Gruda. 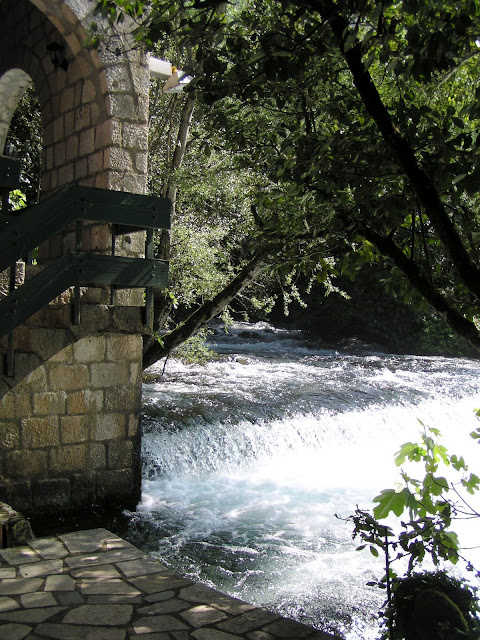 There we stopped at this charming restaurant, Konavoski Dvori, which has a working water mill alongside the River Ljuta.  It also houses a trout farm.  We sat outside next to the waterfall close enough to the stream to touch it.  The waterfall was so loud; can imagine (trying) to fall asleep next to it.  We were served wine & a ham/cheese sandwich by people in native costume (at 9:45 am).  The ham was more like prosciutto; the cheese probably homemade; & the bread divine, the scenery along this drive is gorgeous.  The mountainside is so many shades of green.  There are the tall dark blue/green Cyprus trees, bay (leaf) trees, the silvery green olive trees against a backdrop of grass that slopes down to the flatlands where there are large squares of farmland, cattle & vineyards.  Soon we were making our stop at the resort town of Cavtat. 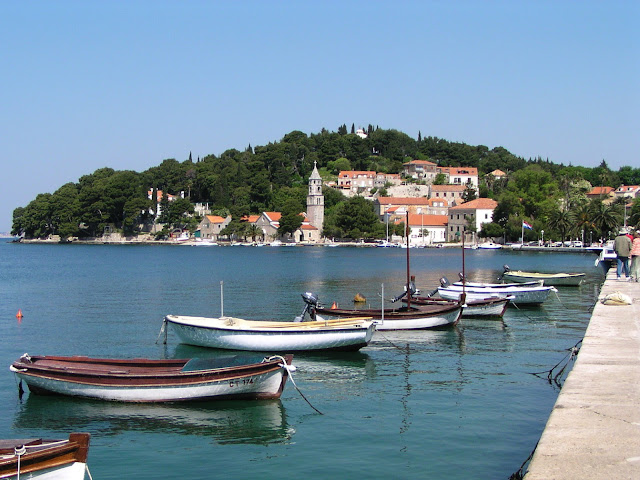 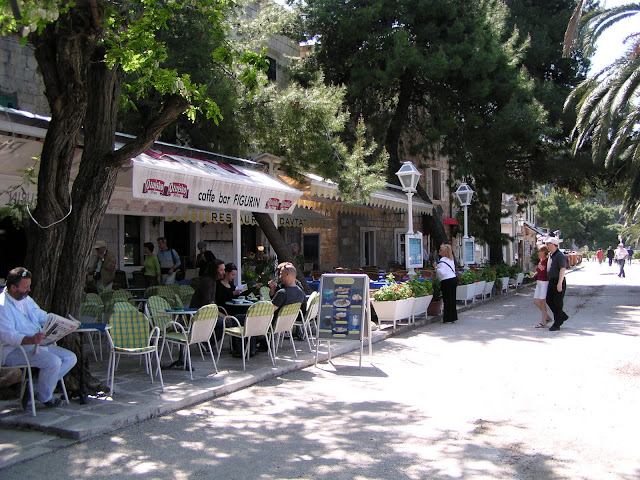 The guide had a little to say about the town's history; & we were given about 25 mins. to walk along the waterfront & look in the shops.  I parked myself at the Dolphin Cafe while waiting for Katie & had a cappucino.  We arrived back to the gates of Dubrovnik about 1.  Where the bus dropped us off there was a line of black Mercedes limousines just outside the gate with men wearing dark suits, sunglasses & ear pieces standing guard.  Antea told us that the President of Croatia was in the area.  She gave us a nice walking tour of the walled city; & I was snapping pictures like crazy.  Good thing we were here today rather than tomorrow when 3 ships will be docked here. 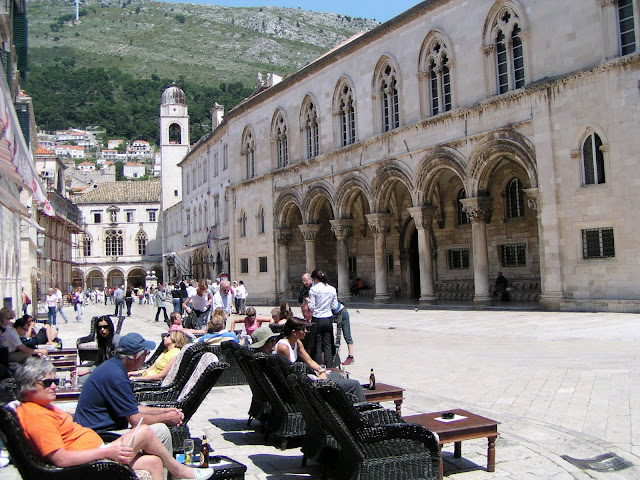 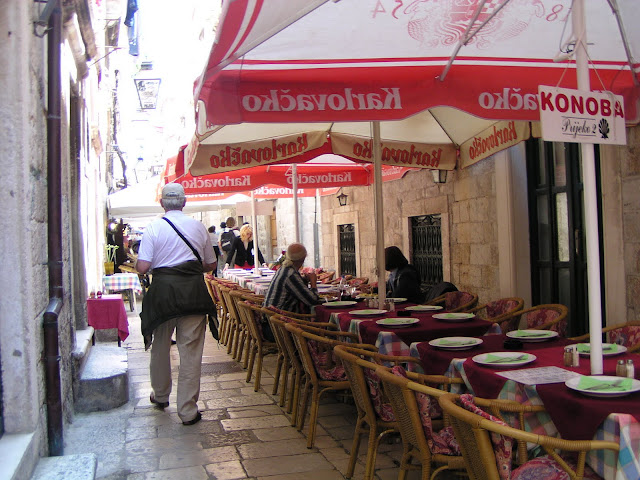 At 2 we weighed anchor to start the final leg of our journey to Venice.  Katie & I went right up to the lunch buffet & sat at a table outside at the stern.  The weather couldn't have been more perfect today.  Bright blue sky, a mild breeze & low to mid 70's.  It was a great day.  Katie had a busy afternoon w/ fitness classes & a beauty shop appointment.  I spent time on the computer.  They keep it almost as cold in the library as they do in the Compt. Ctr.  Afterward I had to go back to the cabin & get under the covers to warm up.  We had hoped to make reservations to dine back in the Polo Grill tonight; but they were booked w/ another long waiting list (for both restaurants).  Katie came in about 5:30; & I barely recognized her (well more than barely).  She had color & highlights & the greatest haircut.  She looks rather spunky & "hip".  Everyone who has seen it, loves it. 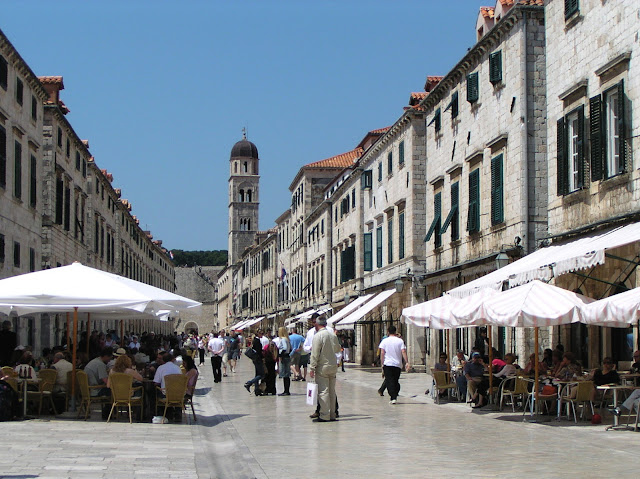 We got showered & dressed for dinner about 7:30.  When we arrived at the D.R., there were a lot of people gathered in the bar outside & a line waiting at the Maitre d' stand.  Turned out everyone was trying to dine at the same time.  While we were waiting in line to ask for a table, a man cut in front of us.  Katie didn't like it; & asked him if he was meeting someone.  He said he was, which turned out to be a lie.  We saw him & his wife later waiting in the bar too.  Then the bar server ignored Katie when she wanted to order a drink.  As those of you who know her, she began to fume.  She complained to the maitre d' about the man cutting in line; but his hands were tied.  What could he do anyway?  We wanted to sit in Jose & Mihaela's section; but it was full.  I think they were trying hard to "make nice", so they put us at a table for 2 by the window next to Jose's section (so he could still come over & wait on us).  Well, that didn't go smoothly either.  Jose & Mihaela were swamped; & the regular waiter for our table wasn't going to go out of his way.  We had to beg for glasses of water; & then the bread basket wasn't brought around.  Katie got up to complain again;but by this time Mihaela was making her way over w/ bread & apologies.  I looked at it as they were trying to accommodate our request as best they could; & we could expect slower service.  But this was not acceptable to Katie.

Both Jose & Mihaela were trying so hard; but she still had that face of steel.  Finally the Maitre d' came over & sat down & tried to smooth things over.  She says I'm too easy & sweet; & I say she's demanding & doesn't cut anybody any slack.  It was a "tense" evening.  But on a lighter note - the food.  We both asked for an appetizer portion of the cannelloni w/ ricotta, fresh tomatoes & mozzarella.  It was fabulous.  We both also had this great seafood bisque w/ Armagnac.  In addition I had a grilled marinated vegetable terrine appetizer & Black Angus fillet of beef Wellington w/ red wine sauce.  Katie had the beef Wellington & the grilled FL lobster tail butterflied w/ herb garlic butter & saffron rice.  Katie had creme brulee' for dessert; & I had orange sorbet.  It was a very good meal.  I will definitely miss those cream soups & sorbets.  We were one of the last out of the D.R.; & Jose asked us to go to the Regatta Lounge because the crew was going to sing in the final show.  I couldn't say no; but Katie just looked at me like I was being a sucker again.  We then stopped by the photographer's to pick up the CD of photos that they had burned for me.  I plugged in the camera & started to go over today's photos on the TV; but Katie fell asleep right in the middle of it.  Oh, well!