Thankful for a fairly good night’s sleep, I was up by 7:15 & ready to roll this morning. A beautiful day for flying out of FL. But for going to Montreal, not so much. The Symphony’s bridge cam was showing grey skies & rain. I went about my last min. preparations at home; & was ready when my dear friend, Caroline, came to pick me up at 10.

I had enough time at the Ft. Myers airport to get a breakfast sandwich before my flight out at 12:25. We actually took off a little early. I read a little; but dozed off & on too. I have the distinct feeling that I might have made some “noises”; God I hope not. As we were circling to land in Cleveland, there were rain squalls visible all around us. The closer we got to the ground, a few spots of bright sunlight would illuminate the grass. You could tell it was the soft grass, like from my childhood. Not the spiky blades you find on Florida lawns. And there were touches of gold, orange & brilliant reds in the trees. Alas, I finally got a peak of autumn!

The change of plane in CLE put me on a tiny Embrear jet; & they made me part with my carry on bag. The one with all my priceless electronic devices. I wasn’t too happy. I said a quick prayer to the airline Gods that everything would be intact when we met up again in Montreal.

Silly me didn’t realize that Cleveland sits right on the edge of Lake Eerie. Lake Eerie is HUGE from the air. When we took off there were small clusters of puffy clouds that cast dark murky shadows on the blue/green water. Kind of surreal. When we approached Montreal, we made a wide banking turn right over the Olympic ski jump. I could see a bit of the river; but no sign of the Symphony. Just bumper to bumper rush hour traffic. Most of the area was multi family type dwellings. Not that many trees; but what were there still had some autumnal colors.
I knew we were doomed when the plane pulled up to gate 82! Yes, it’s as far from the terminal as you might be imagining. FINALLY, I saw the maze of lines at Customs. By the time, I got to the luggage carousel, mine were pretty much the only bags left circling. I commandeered a nice elderly man with a cart; & asked for assistance. $15; so I thought, what the hay. I’m already pooped. I told him I wanted a taxi to the Old Port; & he asked me if I was sure about that. He pointed toward this unending queue of people lined up for the taxi (which I already knew was going to be a flat rate of $38 CAD to town). I saw the “limo” line had only 3 people in it; but he tells me that’s for people who had reserved a limo. I asked how much that would have been. He said $60 CAD. Hmmmmmm. He smiled; & said “I know someone”. He gets on his cell phone & calls “Gaby”. In no time “Gaby” pulls up in a nice Lincoln town car to whisk me off to the Hotel Saint Sulpice.

Gaby kept me entertained during the roughly 20 min. ride to town. All along the way, he was giving me advice on restaurants & shopping & covering historical facts. He was taking crazy side streets in order to avoid backed up traffic (or so I thought). Finally we made a left hand turn along the St. Lawrence River & just in front of us was the Symphony. She was all lit up; looking beautiful & waiting. Gaby said, “That’s why I brought you around this way; I wanted you to see your ship from this perspective”. I was feeling better already. He asked if I had transport to the ship in the morning; & I said I was just going to get the hotel to call me a cab. He said he’d be happy to take me; so we made plans to meet at the hotel at noon. He helped me inside the lobby with all the bags; & bid me adieu. 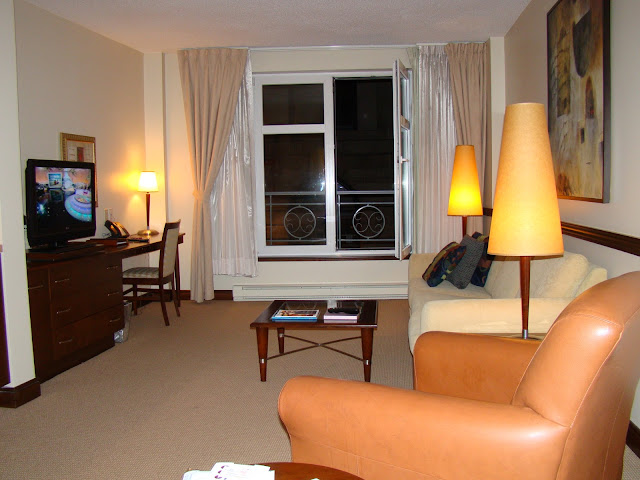 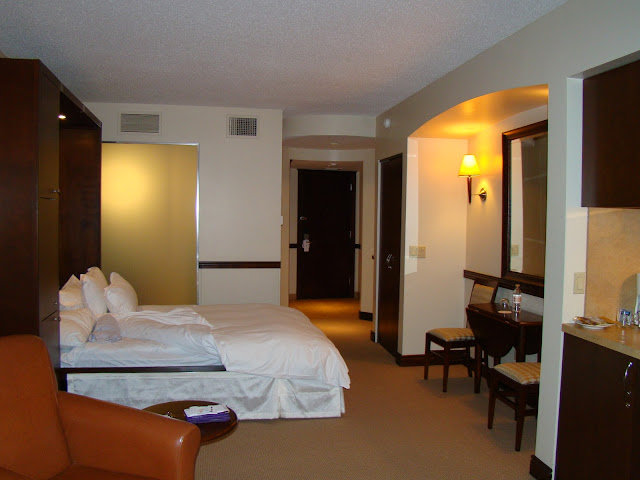 What little I saw of the hotel was very nice. It’s in the perfect location, next door to Notre Dame Basilica, one block off the waterfront. My room is on the 2nd floor right over the busy street (uh-oh). All rooms are “suites”. Mine (#217) is 500 sq. ft with a large living room area, a studio kitchen, queen bed & bath. The walk in shower is big enough for 4 people; & there’s a huge Jacuzzi tub. 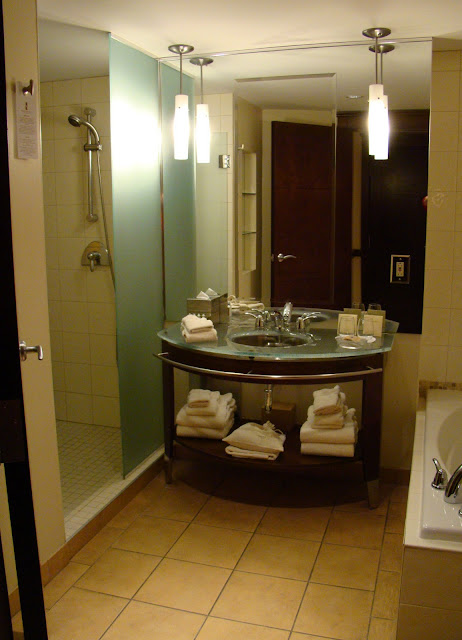 It was almost 7pm when I got into the room. And I knew I was in for the night. I had brought some of my NutriSystem’s food that I could zap in the microwave. I stepped out onto the French balcony to watch the street activities; lots of people milling about. I got in my jammies; & parked on the couch with the remote & the laptop (just like home). Not much on TV in English; & what was, was last week’s episodes from the US. I was worn out from all the excitement & extreme walking, I thought a little power nap would help. From 9 pm on, I dozed on & off; but just couldn’t make myself get back up. So, I just laid there, enjoying the restful solitude. (A nice change from my sometimes chaotic life.) Not the most comfortable mattress; & the early morning street noises were disturbing. First the street sweeper (5 am); then the garbage truck (5:45 am). The most welcome sign in the early morning hours, SUNSHINE!
Posted by Unknown at 12:59 PM