FACTOID: Did you know that “Children of a Lesser God” was filmed in St. John? Or that Walter Pidgeon & Donald Sutherland were born here? Me neither…..

It was looking pretty bleak outside when I got up at 8:30. Thick fog; but it wasn’t going to be too awfully cold today (around 60). I did a little computer work until just before 10. I rushed down to the Bistro for capp’o & some fruit & cheese for breakfast. Crew lifeboat drill was at 10; & I wasn’t sure if anyone would be “minding the store” at the Bistro. The place was abuzz. We had arrived in St. John a little late this morning; & that caused all the tours to be backed up.

I carried my breakfast back to the cabin, sort of lounging until, my tour left at noon. When I met the group in the Starlight Lounge, I saw “Betty” (one of the 2 ladies from my tour in Quebec, the ones that got the bad news phone call). Betty was telling me about her friend’s husband (the one who had the heart attack). The poor lady ended up missing the last flight out of QUE on Sunday; & had to stay over an extra night. She has been sitting by her husband’s side at the hospital ever since she returned. They are not sure if he’s going to make it. Poor Betty was “blue”; & she has so much trouble walking. So, I stayed close by; & helped her throughout the tour.

Today’s tour was the St. John Highlights by Trolley (STJ-A1). Our guide was a lovely woman, dressed in period costume, named Ann. We had a lady driver, Bonnie; & the tour escort was Jo (works in the casino). Ann was very apologetic about the weather; & said we’d have to use our imagination occasionally. She said whenever she would point out something that was hidden behind the fog, she asked us to “ooh & ahh” (as if we really could see it & were duly impressed). 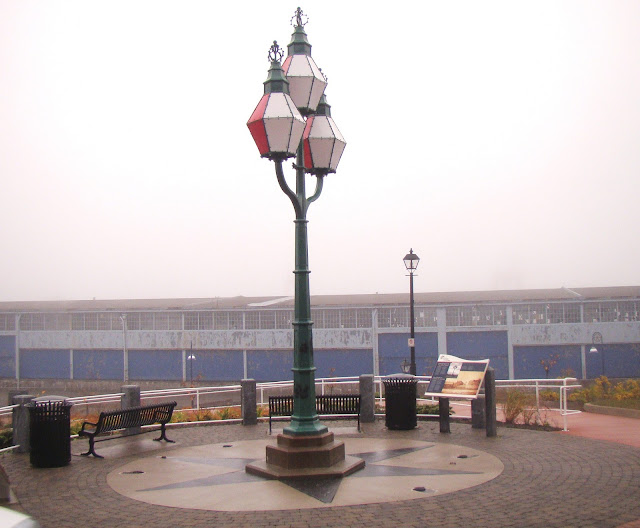 Leaving the pier we circled St. Patrick’s Square, a historical park right by the pier that held a Celtic cross & an unusual triple street lamp. One side of the street lamp (facing the harbour) was red, the other side (landside) was white. She explained that before there were light houses, the ship captains used to navigate by these lamps. They knew if they could see “red” they were on course. If they saw “white, it meant that were about to run into land. 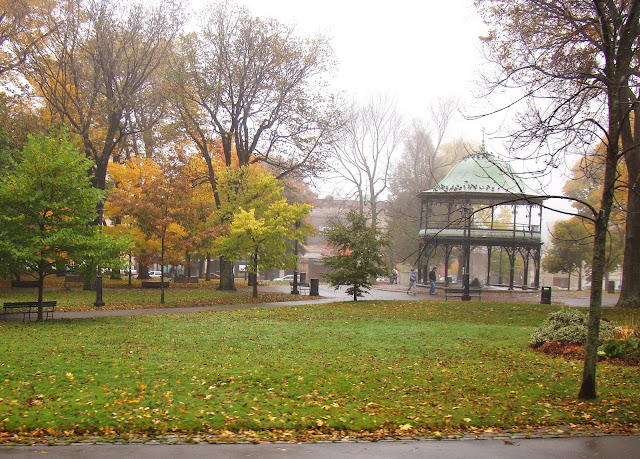 We went inland a little further to King’s Square in their downtown area. In the center, a lovely park with a two story gazebo/bandstand. On one side of the square stood the Imperial Theater where some of their native son actors started their careers. 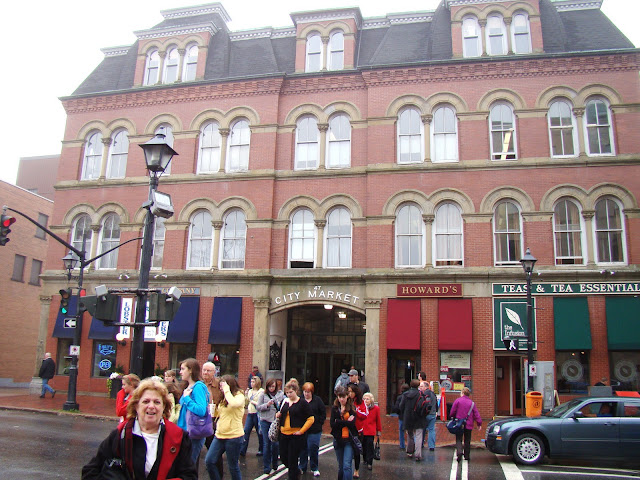 On the opposite side of the square was the City Market, the oldest market in Canada. It’s not huge by any means; but it bustles with activity. The produce was beautiful; & Ann said that most everyone uses it as their local neighborhood market. Built by shipbuilders, the white wooden ceiling was modeled after a ship’s hull (upside down). 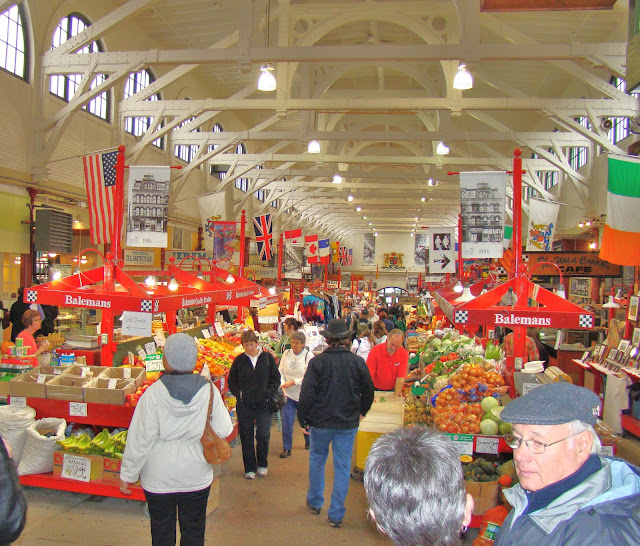 We drove through residential neighborhoods. She showed us the school & a house that were used in the filming of the (above mentioned) movie. We saw medium sized “mansions” (who’s yearly property taxes are only about $1200 CAD) & everyday people’s houses. Like we saw in Halifax, they are multi colored; & mostly clapboard. 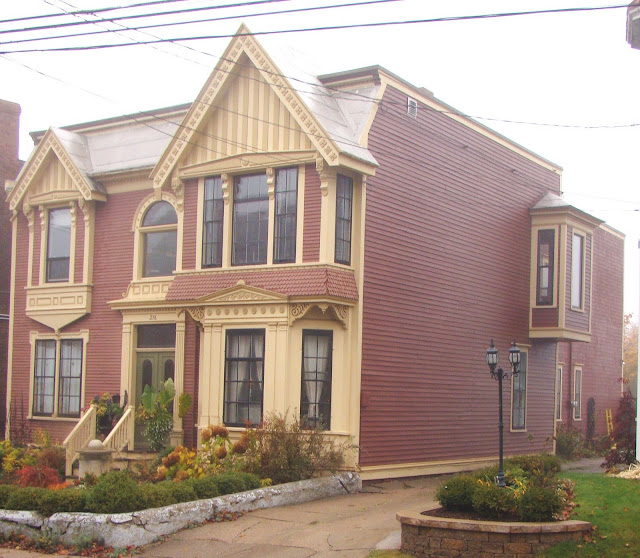 We drove up to the Fort Howe lookout; where could have seen the Symphony docked below had it not been for the fog. While up there, Ann pointed out a humongous hunk of limestone that geologists have verified is 1 billion years old! I sorta wonder how they can tell. 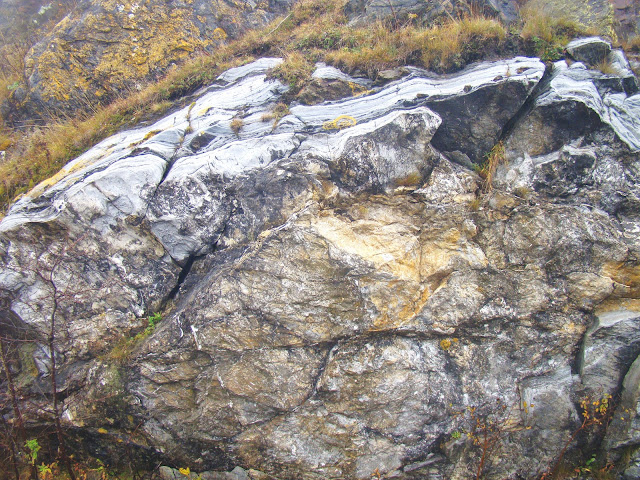 The highlight of today’s tour was a visit to the Reversing Falls Rapids. Again the fog made it difficult to get the full effect; but the timing of our visit was perfect. We arrived at “slack tide”; just past low tide, & when the water has begun to rise approximately 14’. Everyone knows from their geography lessons that rivers flow into oceans. And this is true part of the time here at the Bay of Fundy, where the St, Lawrence River meets the Atlantic Ocean. Ann tells us that deep keeled sailboats must come through this pass at “slack tide”; & this stage only lasts about 20 mins. She says at her house, she can sit & watch the sailboats gather at the mouth of the Bay of Fundy, patiently waiting for “slack tide”. Then there’s a mad rush during that 20 min. period, for them all to make it up into the St. Lawrence. Jet boat rides on these rapids are a big tourist attraction. The ones that were scheduled for today were cancelled because of the dangerous conditions with the heavy fog. 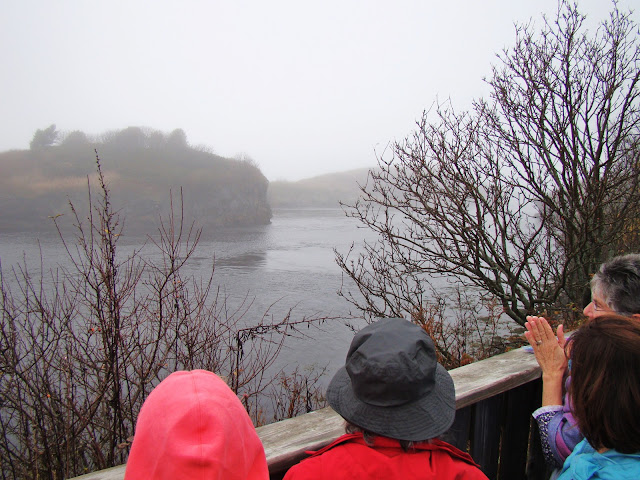 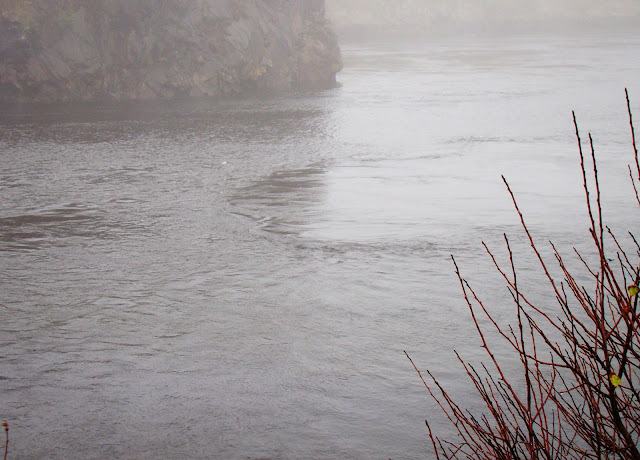 Two times a day (every 12 hrs & 26 mins. to be precise) the tide rises as much as 48’! It is the highest tide in the world!! When the tide comes in from the Atlantic, pushing it into the St. Lawrence, it runs out of room. It has no where to go, but back out. We were able to see the clockwise eddies form as the direction started to change. It’s quite fascinating. She helped us spot some seals who love “slack tide”. They just surf along the top of the flow with their mouths open & feed on the fish caught in the rush of the tide. Easy lunch! 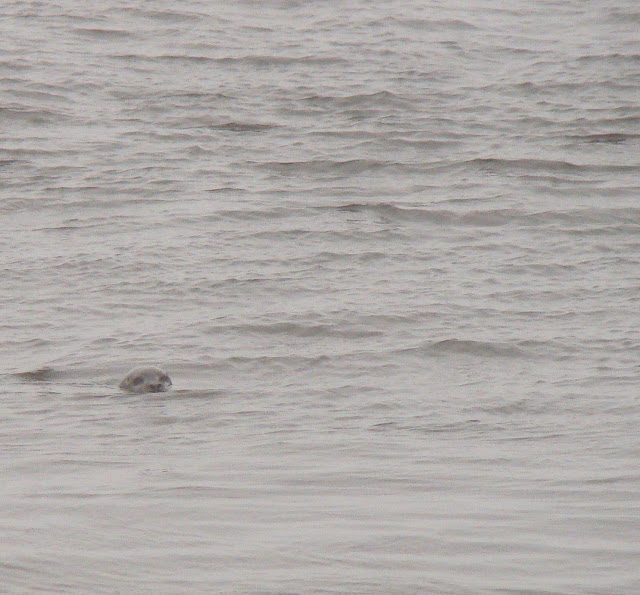 Ann had before & after photos of the tide change; & I attempted to take a photo of her photo. It’s not of very good quality; but you can get some idea of how it affects some of the boat docks in the tributaries. 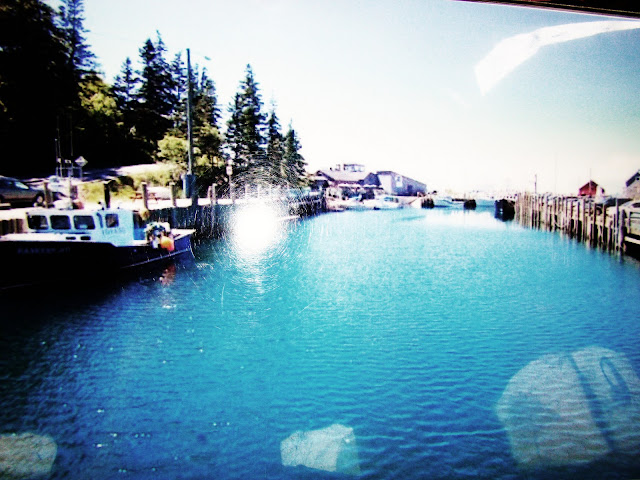 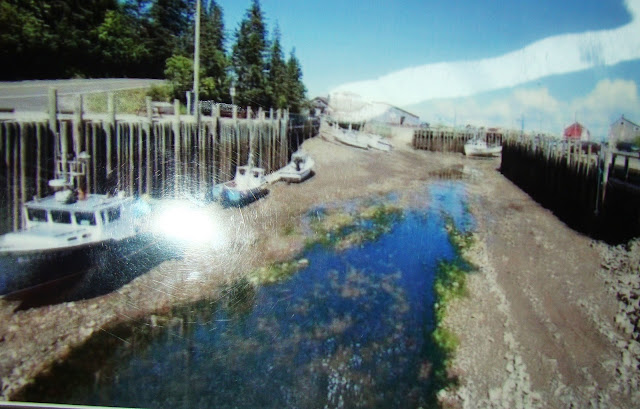 After leaving the rapids, we drove through Wolastoq Park. Not sure of the significance of this park; but it was chock full of interesting wooden sculptures. 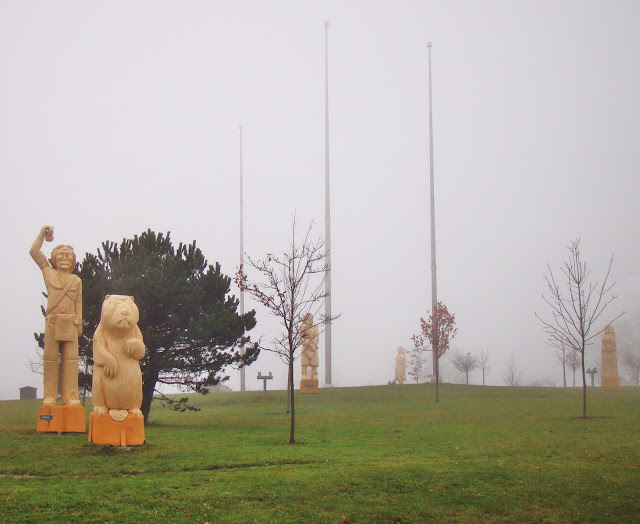 The driver took us past the “witch’s house”, a true “Munster-esque” looking house. She said every Halloween the kids dare other kids to go trick or treating there. Nobody will. 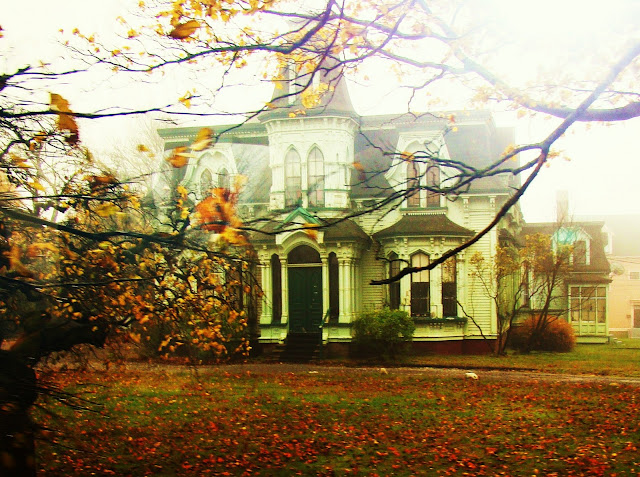 As we approached the pier area, she pointed out Market Square, which would be a wonderful place to visit in the afternoon to shop & eat. It’s very close to the ship. 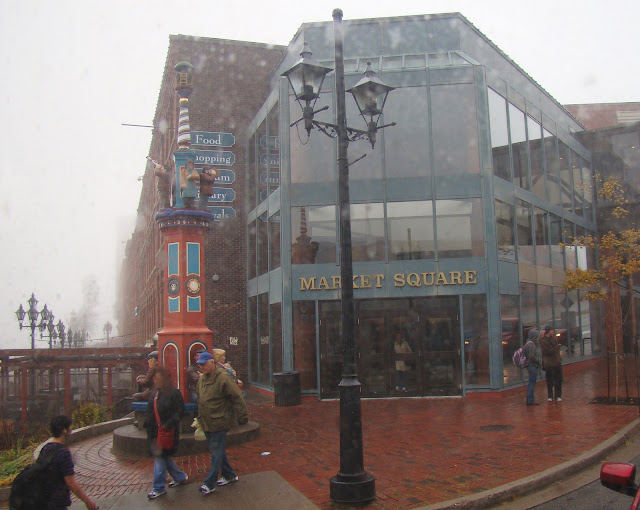 Back onboard about 4; I stopped at the Bistro for some fruit & cheese & a cup of hot chocolate to go. I saw Alice & Doris who informed me that they would not be in the D.R. tonight. A shame; because I was actually going to show up. Also when I came through the terminal, I saw a Pax sitting there with his laptop. He said there was “free” wifi; & I thought, oh goody, I can upload photos to the blog for free! I came aboard; gathered up the laptop & trip notes; & set up “shop” at a table right by the security guards. Here I sat for the next 90 mins (until I ran out of battery power). I got a lot done; as I’m sure you saw.

About 4:20, the Guard came over; & said “I think you better get back onboard now”. I was the next to the last person to be scanned back onboard. In fact, we pulled away from the dock about 5 mins. early.

I told Mag that I would be dining in again. I gave her my order; & told her she could bring it whenever she wanted. She asked if she could bring it before 9 tonight; & I said that was perfectly fine. I asked her if she had a hot date or something. She said she had the opportunity to work out in the Pax. Gym tonight with a personal trainer. As if the poor girl doesn’t get enough of a work out every day doing her job. I went down to the Reception Desk to turn in a visitor request form for my friend, Joyce, who may come aboard in Charleston. And we were told to pick up our passports since we have to present ourselves bright & early in the morning to U.S. Immigration (since we’re re-entering the U.S. from a foreign country, Canada).

I came back, showered & washed my filthy hair. (I was getting sicker of the wig than I was of the hair.) By the time I finished, Mag brought my dinner. It’s Neptune night; & not one of my favorite menus. I did manage to find something. I had an appetizer portion of the pasta special (yes, again). It was linguini with lemon oil, roasted garlic, tomatoes, parsley & cracked black pepper topped with tiny rock shrimp. Very tasty. Although I should have known better from past experience, I had the king crab cake as my main course. It was served with garlic mashed potatoes, grilled veggies & a Dijon mustard aioli sauce. I don’t know why this continues to be a disappointment to me. Crystal offers huge chunks of crab meat in various ways through the cruise. Then why is it that the crab cake is predominantly “filler” with small fleck of crab meat? As I said Neptune night is not my favorite. And given the choice of filet mignon, Cornish game hen, & ahi tuna; I went with the crab cake. The pasta was very good. But maybe I could have just gone with something from the regular room service menu & been happier. I did order a fruit & cheese plate again for dessert; but will put it in the fridge for breakfast since I’ll have to be out of here kind of early. 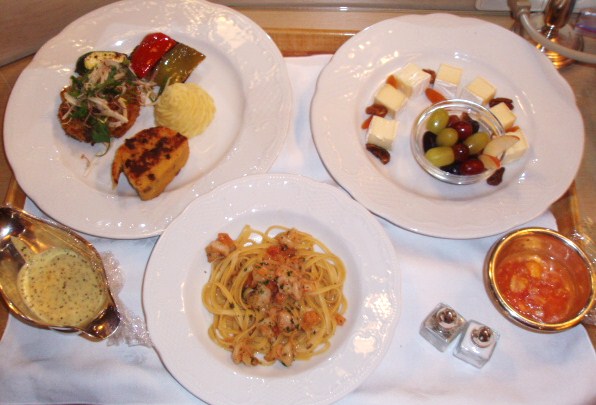 Tonight, we run our clocks back an hour (back to Eastern Daylight Time). Despite the fact that I have to set the alarm for 7 am (& we all know I can’t sleep when an alarm is set), I took advantage of this extra hour to get caught up on the blog. Maybe I’ll get lucky tomorrow & find free wifi somewhere. There’s some nice rocking motion tonight; & I’m pretty beat. I pray that I fall asleep the min. my head hits the pillow. Only if I try to pretend that the alarm’s not on….. what alarm?
Posted by Unknown at 11:23 AM