Despite the stuffy nose & a headache, I slept fairly good. The bed’s a little hard (may ask for one of those egg crates). Since I still had “leftovers”, that turned out to be breakfast (a little cold Bearnaise sauce never hurt anyone). My view out the window is over the gangway & side of the terminal. But according to the bridge cam there is sunshine out there. The forecast is for partly cloudy, high in the upper 40’s. We can only hope.

About 10:30 I dressed & went down to the Bistro with my Crystal Serenity thermal mug for my first cup of cappuccino. A few eyebrows were raised behind the bar; but I told them I would try to procure a Symphony mug so that I didn’t play favorites. I just HAD to see if they had those vanilla pastries on the buffet; & they did. I’m not being picky; but they do look quite different from the ones on Serenity; but they taste the same. There are a number of “visitors” onboard today, maybe TA’s having a guided tour.

My tour of Old & New Montreal departed at 1:15. We had the most adorable guide, Annique, & her driver, Stanley (bus #6). Her running commentary was spot on; not too heavy on the historical facts & chock full of funny stories. What I liked most was that she gave you plenty of advance notice of photo ops coming up ahead. I have made it a habit to get in the back row of the bus just so I can switch from side to side for the best shot. The weather couldn’t have been more beautiful. There was less wind today; I never saw a cloud & the high was 51. And while I’m on the subject of weather……let me say I’d like to shoot the people who have been updating the status of the fall foliage on the internet. True, what I’ve seen so far is only slightly “past peak”; the trees are not bare! I learned that due to last weekend’s “nor’easter”, the red leaves were blown from the trees. But all the other colors are hanging for dear life. 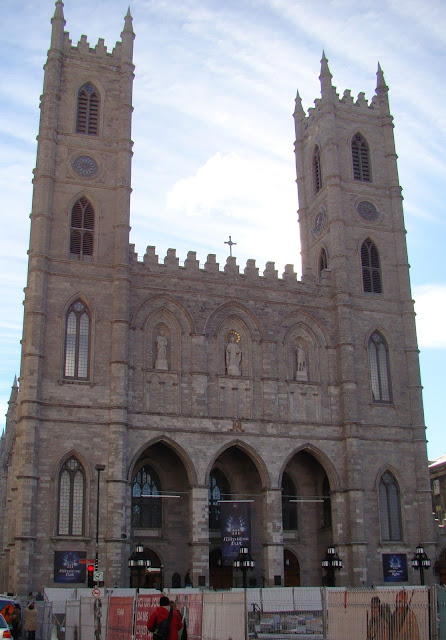 After a short ride through the Vieux Port area, our first stop was Notre-Dame Basilica. There are so many great stories to the history of NDB. The devout French Catholic residents were determined to build the most impressive cathedral in all of North America. Architects from around the world submitted plans. Much to their chagrin, the task was awarded to James O’Donnell, an AMERICAN. Not only was he American; but he was a PROTESTANT from NORTHERN IRELAND! Taking 5 yrs to build, it was completed in 1829. Mr. O’Donnell, being so moved by this experience, converted to Catholicism (on his death bed) 6 months after completion. 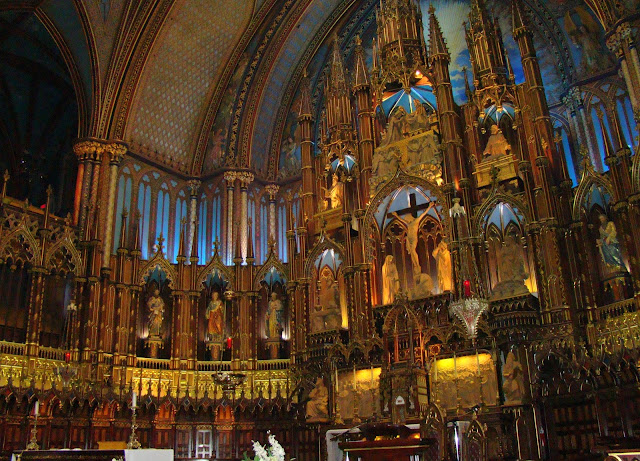 The sanctuary rivals most that I’ve seen throughout Europe. It seats 3,500; Celine Dion’s wedding took place there; as did Pavarotti’s famous Christmas concert in ’78. Everyone, who is “anyone” in Montreal, wants to be married there. Since this is next to impossible, most “settle” for the smaller Sacred Heart Chapel (behind the altar of the Basilica). According to our guide, you are put on a waiting list that takes anywhere from 3-5 years to clear. Some people put their names on the list BEFORE finding that special someone. If by that time, the engagement is called off…….people have been known to “sell” that date to someone else for a not so modest price. Unfortunately there was a wedding taking place there this afternoon, so it was off limits to us. 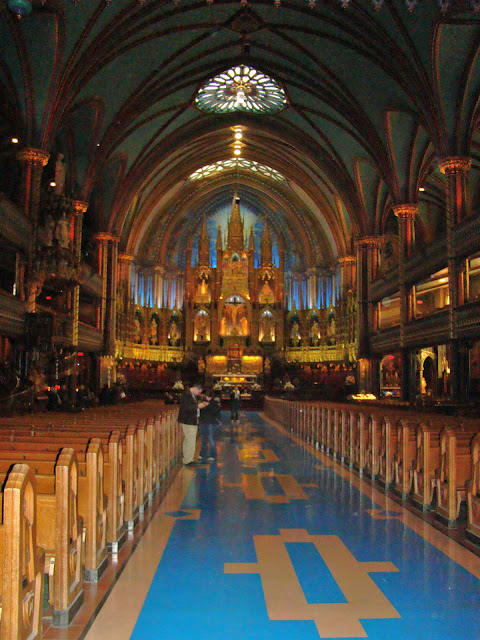 Back in the main sanctuary, there is almost too much ornate-ness to take in. The aisles are graded gradually downward for perfect sightlines. The curved ceiling is painted deep blue with 7,000 hand painted stars of 23 carat gold. The large collection of stained glass was a gift for the church’s centennial celebration by the artisans of Limoges, France. 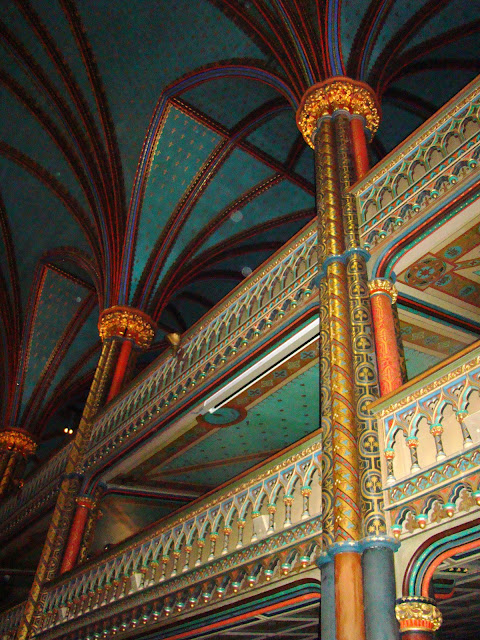 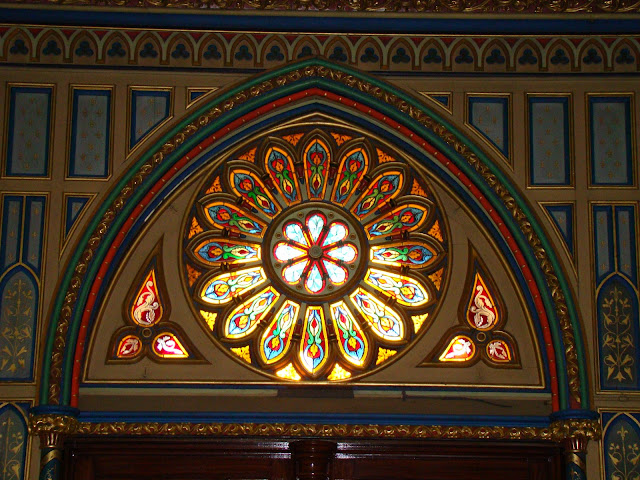 The pews, the ornate spiraled pulpit & the 16 “confessionals” are of intricately, hand carved black walnut. The detail is mind boggling! And the altar, I’ll just let the photos speak for themselves.

The massive Casavant organ consists of 4 keyboards, 99 stops (pedals) & approximately 7,000 pipes! The tallest pipe is 32’; the shortest, a mere ¼”. The afternoon light hitting those beautiful stained glass windows made for a truly moving experience. 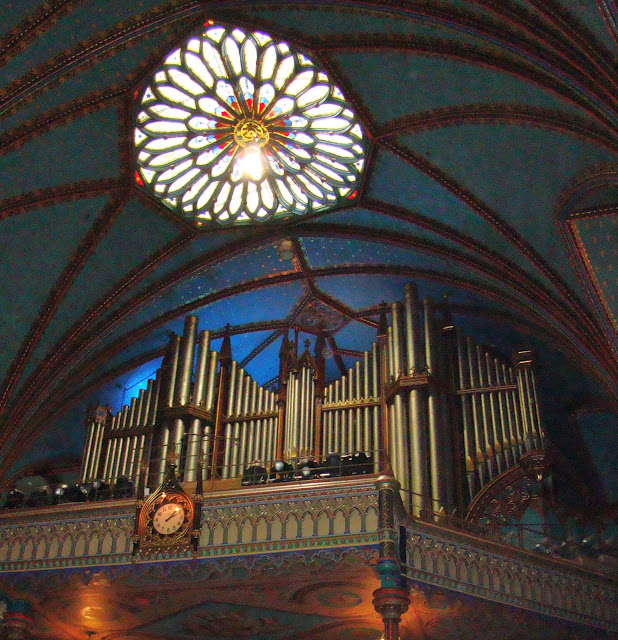 Back on the bus, Annique went into great detail explaining the “underground city”, a HUGE network of residential & commercial buildings. Would you believe that there are 25 miles of hallways, 7 malls, two 8-lane expressways, 2,000 apts & condos & 80% of the entire downtown commercial buildings will be found down there??? The convention center, which is comprised of hundreds of colorful glass panels, is one of the many buildings that “float” above this underground metropolis. It would take weeks just to explore. She said that people often leave their “homes”, drop the kids off at school, shop for groceries, take clothes to the dry cleaners, go to work & NEVER have to come above ground! This concept of living is totally unfathomable to me. 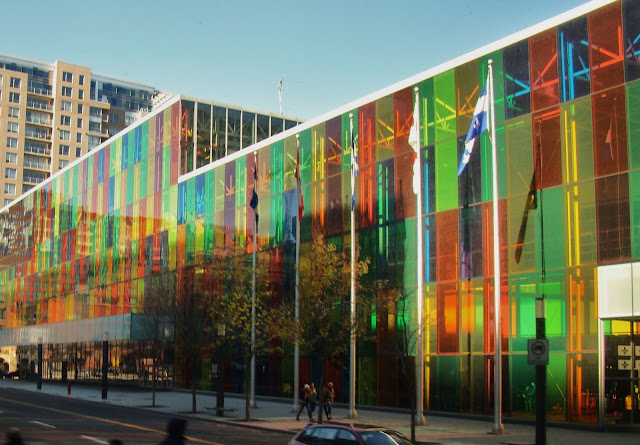 Montreal is a humongous mish-mash of foreign cultures. The architecture runs the gamut from old French, to art deco, art nouveau & ultra modern. All coexist side by side. We slowly made our way up to the Mount Royal area, which Annique explaines is the middle & tallest summit of the three. West Mount is the home of the wealthy English speaking population. East Mount is home to the less wealthy, French speaking population. 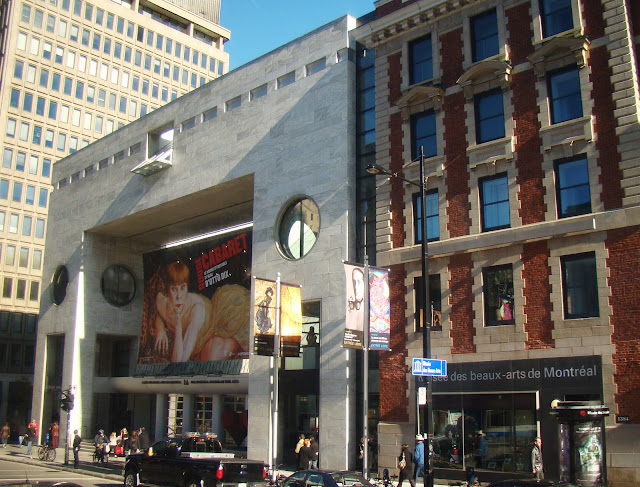 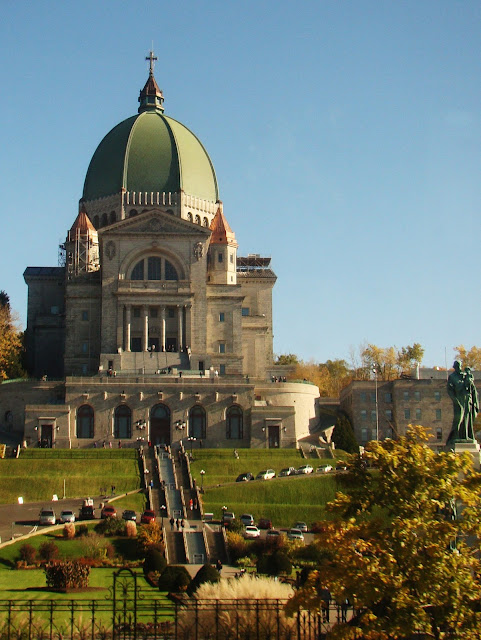 Our next stop (photo op only) was St. Joseph’s Oratory, one of the world’s most visited shrines that sits perched upon a rolling hilltop that has a dome second in size only to St. Peter’s in Rome. The carillon (bells) was a gift to Montreal by the city of Paris. It was originally housed in the Eiffel Tower; but was deemed too heavy for the structure. Atop the Oratory is a copper spire with a silver cross which was the original chapel & living quarters of the founder, Brother Andre. We were told that the interior is filled with canes, walkers, wheel chairs of the many devoted that made the pilgrimage there for spiritual healing. The stairway that leads up to the church door is divided into three “lanes”. The center lane is only used by those who seek “salvation” or healing; & they must climb the steps on their knees while reciting the rosary. 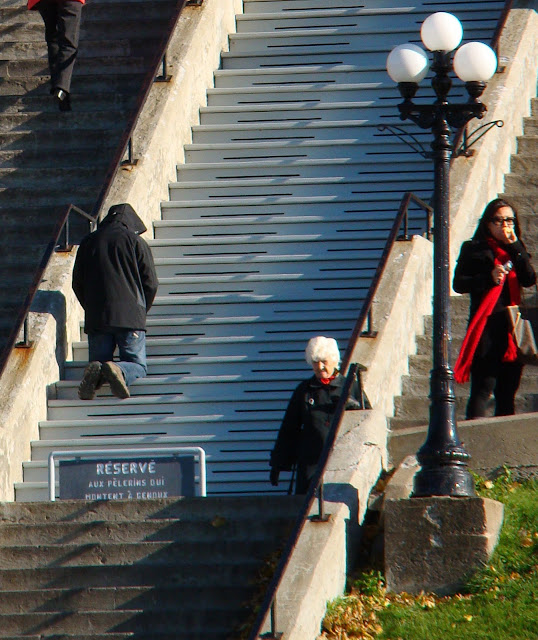 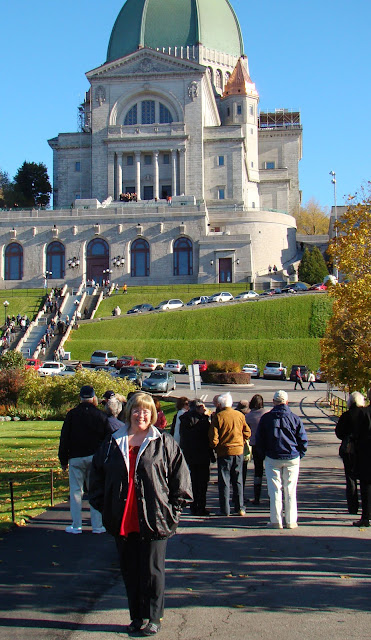 We drove through a beautiful parkland area which also houses North America’s largest necropolis, divided into Catholic, Protestant & Jewish cemeteries. She told us that the cemeteries are so packed that, (as disgusting as it sounds), they are burying their dead 5 & 6 deep! Our final destination was the spectacular views from Mount Royal. Although we were unable to see the Symphony; there was an uninterrupted 180 degree view of the Olympic Stadium, residential areas & St. Lawrence River meandering toward the northeast. 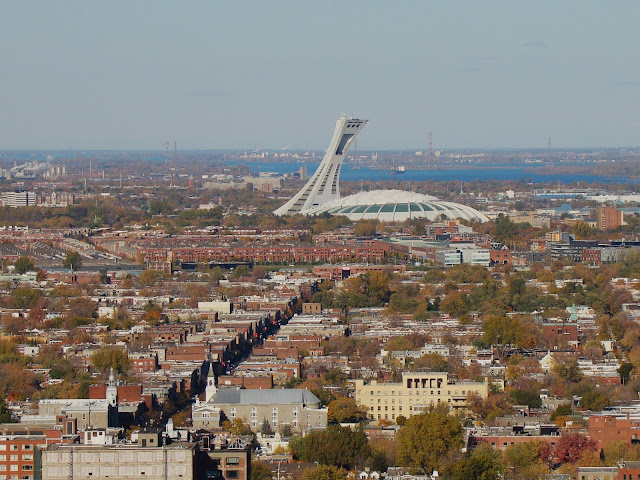 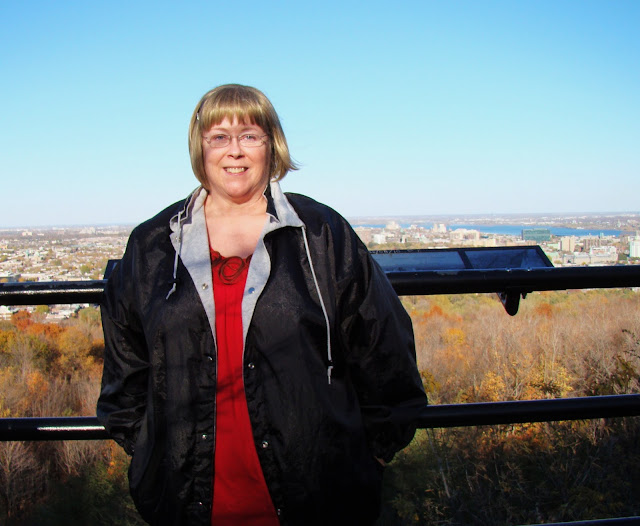 I’m so glad that this tour was in the late afternoon because the angle of the golden afternoon sun made the colors of this gorgeous city “pop”. Massive numbers of people, impeccably dressed, walking in mass. 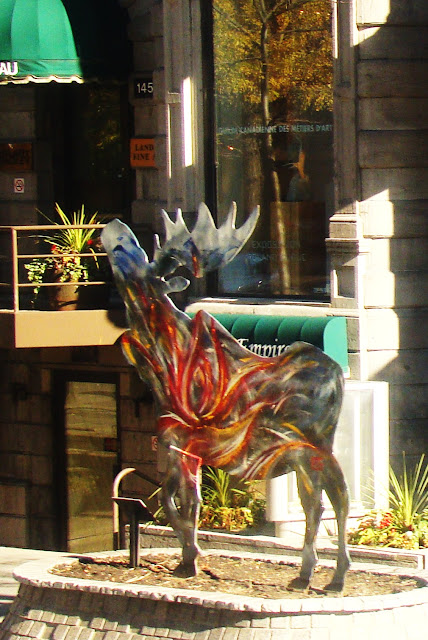 Everywhere you looked there are hundreds, if not thousands, of pieces of sculpture & art, in every possible medium. This is truly a gorgeous city. 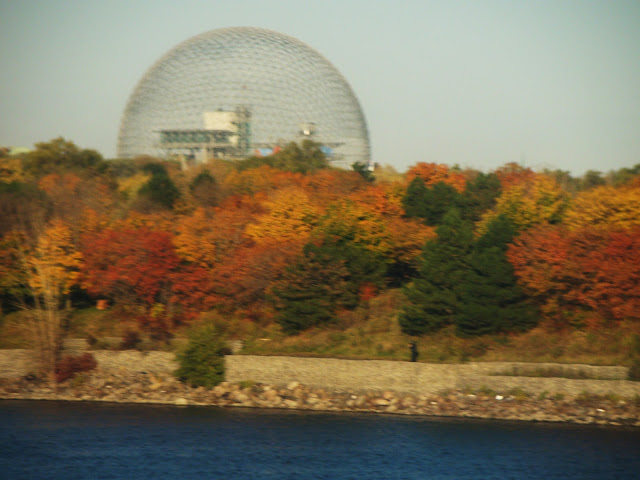 We arrived back at the ship about 4:30. As we were getting off the bus, Annique pointed out 2 strange structures that I had been looking at for 2 days just across from the bow of the ship. St. Helene’s Island sits smack dab in the middle of the St. Lawrence. On one end is a geodesic dome which we learned is the Environmental Biosphere of Canada. Directly in front of the ship is a curious looking group of buildings comprised of brown “cubes”. She explained that this land filled jetty was built in preparation for the 1967 World Exhibition. Quite avant-garde even by today’s standards, this became an ultra-exclusive enclave of condos, known as “Habitat 67”. 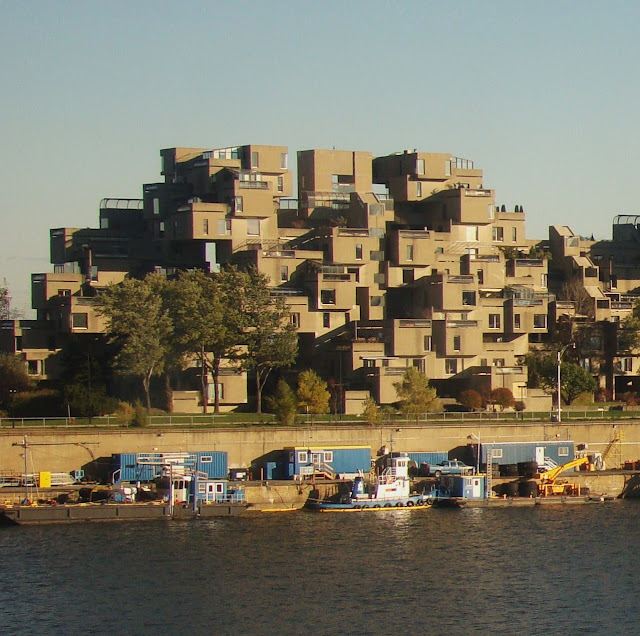 I spent several hours editing today’s photos before dinner. Since we had lifeboat drill tonight at 8, I decided to go to the D.R. to meet my tablemates. What an interesting group of people. I may have to come back tomorrow night & correct a few of these names; but……one couple is from Texas, Ralph & Alice (he reminds me of Rudy Giuliani).

Alice is an author, jury consultant, handwriting analyst (who sometimes lectures on Crystal but is not doing so this trip). They’re traveling w/ a good friend, Doris; who is from southern CA. She is a sweetheart. There is an Asian woman, named Pauline, who has been on over 250 Crystal cruises! (She makes me look like a neophyte.) Another very well heeled & well traveled single lady, named Maurine who is from the San Francisco Bay area (she doesn't elaborate). And there is an older Hungarian gentleman, named Norman,  who has traveled just about everywhere on the planet. Can’t wait for the Chief to come to dinner & meet this bunch!

During dinner we set sail (9 pm) for the short trek up to Quebec City. Unfortunately in the D.R. you are unable to hear Louis Armstrong singing “Wonderful World” as we pulled away from the docks. (Always a moving experience.) I found I was not the only one who didn’t make it to the D.R. last night. So, everyone was a little slow warming up; but I think we’ll be fine. Now, let’s get to that dinner. I started with the crabmeat tower. It was a mixture of shredded crab meat, kernels of sweet corn, finely diced new potatoes & cucumbers drizzled with pumpkin seed oil. I followed this with another appetizer of marinated white asparagus with tiny tomato halves, olives & shallots that had been marinated in lemon vinaigrette. Both plates were beautifully presented; almost too beautiful to eat……ALMOST. For my entrée I chose pan fried scallops that were topped with grilled oyster mushrooms. They sat on a bed of glazed vegetable & a squiggle of mashed potatoes that had been blended with green peas (try it, you’ll like it). For dessert I had a fruit & cheese plate. I told my trusty waiter, Adem (yes, it is with an “e”) that I prefer mild cheeses; & I let him choose for me. Don’t ask me what I had; because I didn’t recognize anything but the brie & goat cheese. It was a nice finish to a beautiful dinner.

We left the D.R. about 10:30; some going to the show (pianist), a few couldn’t wait for the shops to open. You know where I went. To work. As much as I’d like to finish uploading yesterday’s blog, the internet has been so slow; & I’m just too pooped.

I’m eternally grateful that we had such a perfectly beautiful day & the absolute best tour guide in all of Canada. I can honestly say I’ve fallen in love with Montreal.
Posted by Unknown at 7:50 PM

I'm so excited to find your blog. I LOVE to read Crystal travel blogs between trips. My husband and I are looking forward to our first trip on the Symphony so I'm enjoying your Symphony trip account. (We've been on the Serenity a few times.)