FACTOID: Did you know that Halifax is the 2nd largest harbour in the world (after Sydney, Australia)? And that it never freezes? Well, neither did I.

About 9 am, I cautiously opened the drapes; our luck had really run out. My window was facing the open harbour; & I could barely make out the shoreline through the dense fog. And a fairly hard rain was falling on the deck below. The ship had a lot of tours scheduled for today; most of which said, “this excursion will operate in all weather conditions”. (No refund, no excuses) Drat!

My planned excursion to picturesque Peggy’s Cove was going, with or without me. I still had some leftovers from dinner last night; so that turned out to be breakfast. I never even got around to having my capp’o today. I told Mag when she came in that I didn’t need anything; just take the rest of the morning off. She refilled my ice bucket & took away last night’s dishes; & let me be. I was back on the computer feverishly trying to catch up. (I keep getting e-mails asking if everything’s alright; what’s happened to the blog?) It’s been a long time since I’ve actually cruised & taken tours. Today’s high was 61; so cold wasn’t necessarily going to be a problem. But wet was. So, I only carried a sweater & my rain poncho & an umbrella. 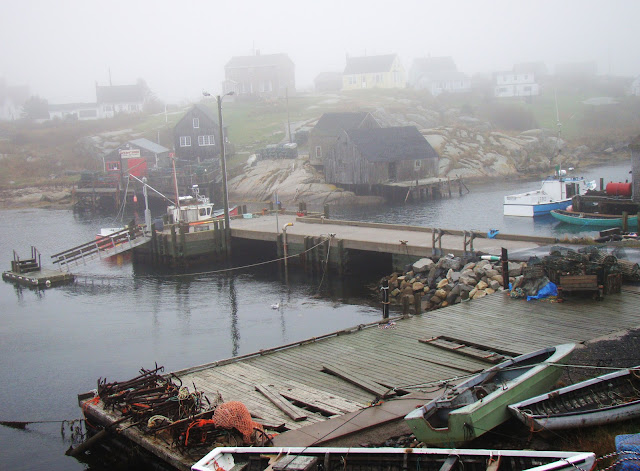 When my tour left at 12:15, it was raining steadily & the fog was still thick. Today’s tour was called “Peggy’s Cove Acquaintance” (HAL-I). Our guide’s name was Laurie; driver, Lloyd; & the tour escort was Steve, one of the dance hosts. We were on bus #7. The bus windows kept fogging up; & we couldn’t see much of anything. I could tell that there were still a lot of colorful leaves on the trees. And the houses were quite colorful, clapboard & similar to what you would expect in the northeastern U.S. 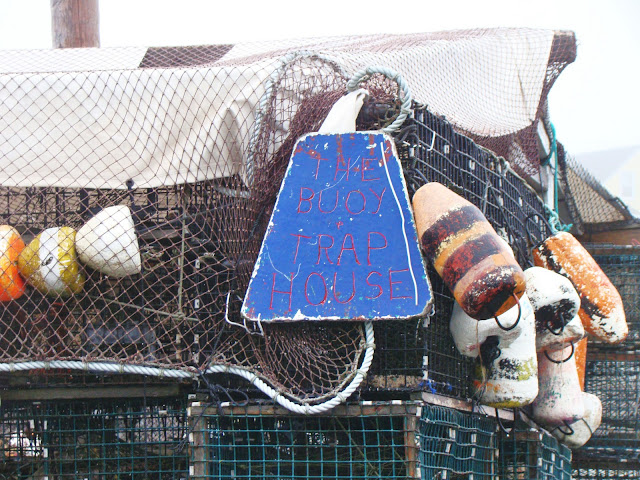 The drive to the small fishing village of Peggy’s Cove on St. Margaret’s Bay (“Peggy”) took about an hour. I’m sure it’s quite lovely on a sunny day. There is not a lot to see; but the uniqueness would make it a big draw. There are less than 50 year round residents; mostly lobster fishermen & their families. Lloyd parked the bus in a lot by the famous light house; & some of us walked with the guide; some just wandered around on their own. We walked down to look at the “famous” monument that was carved out of granite by William deGarthe. He was a quirky artist that took up residence here; he befriended the fishermen & wanted to create this monument to them & to the famous “Peggy”. He died before finishing it; & he requested that his ashes be interred inside the monument (behind the white square plaque). 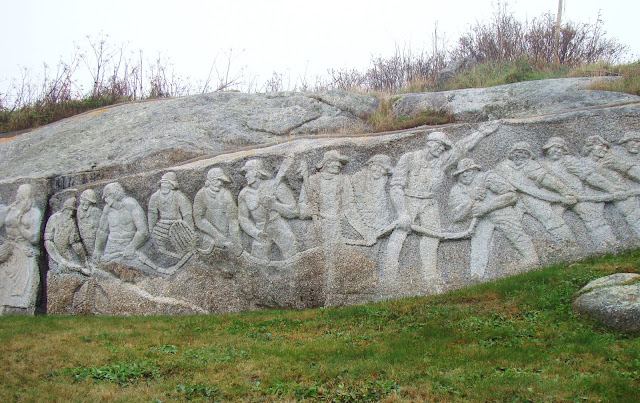 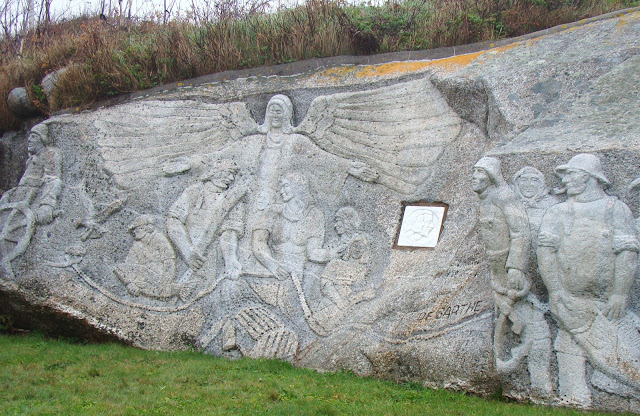 There was very little activity in Peggy’s Cove today; lobster season starts again next week. The boats & lobster pots sit idle at the small dock. There are a few souvenir shops, an art gallery & a restaurant. I went back up to the top of the “hill” & got some shots of the light house. The fog occasionally got less dense; but never disappeared completely. It would mist rain off & on; & I developed an urge for hot chocolate. So, I sat down in the restaurant for a few mins, & had a cup until it was time to reboard the bus. 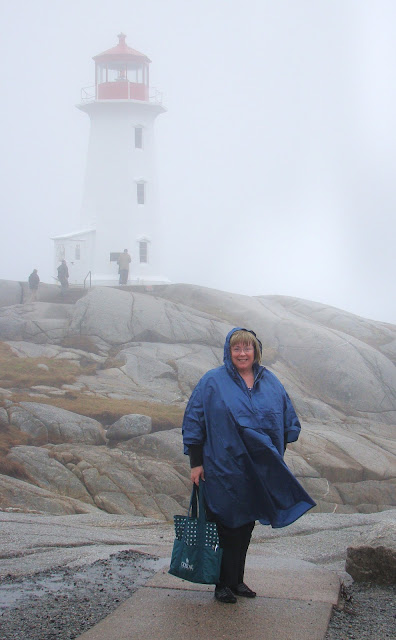 It had finally stopped raining by the time we arrived back in Halifax at 4:30. The general consensus of those on the tour, thought it was much ado about nothing. The bad weather was unfortunate. And given the distance, I don’t suppose $57 was an outrageous price for the our. I guess I’m glad I got to see the light house; but I suppose I’d have been just as happy curled up in a deck chair, wrapped up in a steamer blanket, reading a book & sipping hot chocolate. 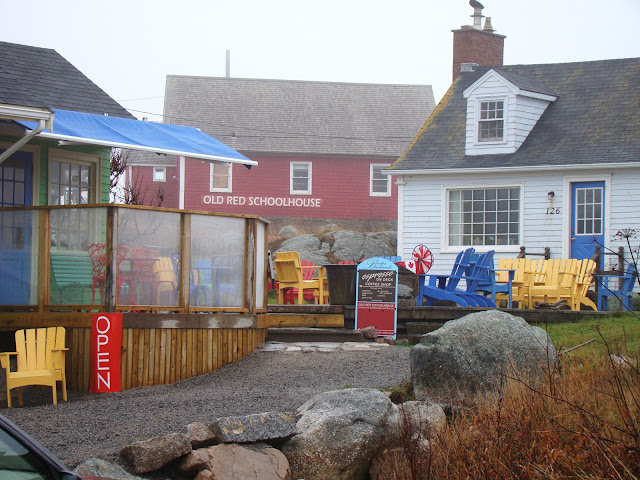 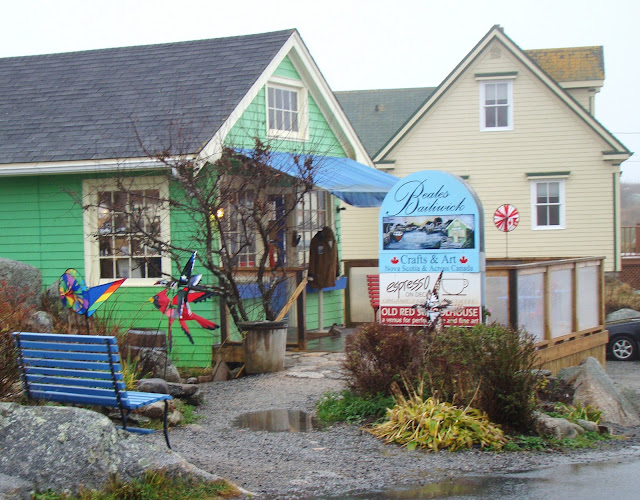 I took advantage of a “port day” special in the spa. A 50 min. massage for $100. My appt. was 6 pm. I requested a mostly deep tissue massage; & she worked me over good. I had knots on top of knots; at times it felt like her elbows were going to puncture a lung! But it hurt in a good sort of way. I was worthless when I left there at 7; no way was I going to make it to the D.R. (again). I came home; piled under the covers & fell asleep. Mag came in to check on me about 8; & I gave her my dinner order. She was back with it a little before 9. 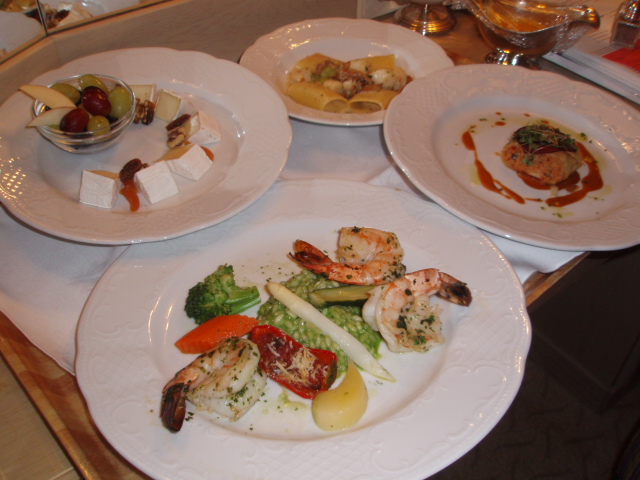 I had the most luscious appetizer, Maine lobster strudel wrapped in a delicate phyllo pasty drizzled with Crawfish Buerre Blanc sauce. I also had another appetizer portion of the pasta special. This time is was HUGE tubes of pasta (pacceri), with tiny sweet scallops & chanterelle mushrooms & a champagne sauce. Oh Lordy, was that good.

For my main course I had sautéed jumbo shrimp that was served on a bed of lemon-spinach risotto. It was accompanied by grilled vegetables & a dipping sauce of bell pepper & saffron emulsion. Yummo!

By 10 pm, I need to work but wanted to read. My “tortured” back muscles were starting to scream (bruises). I must have read a page; & I was gone. The winds have picked up; & they’ve blocked off the outside decks for safety reasons. There is a nice trembling vibration that feels real good on the muscles. I slept several hours.

Awoke about 2 am & had my dessert (fruit & cheese plate). Did some more typing on the blog til about 4 am. Took 2 Advil; & back to bed for a little longer. Another tour tomorrow; & it’ll be here real soon.
Posted by Unknown at 4:18 PM