Montreal, Canada
I guess I’m a little gun shy……since the sun was out, I figured I should step out & look around; snap a few pictures just in case. It’s a brisk 41 (wind chill of 33). I walked next door to Notre Dame. The spires were beautiful framed by the baby blue skies. I did not go in as I have a guided tour planned for tomorrow. I walked a few blocks south & then towards the River. And there was the Symphony, just waiting for me. I made the big loop back to the hotel about 11. There’s an inviting fireplace in the lobby; & I decided to sit there & enjoy the ambiance while I waited for Gaby’s arrival.
Gaby asked if I had time for a short tour of the “old quarter”; so he spent about 15 mins. pointing out landmarks. He delivered me to the ship about 12:30, at which time he handed me a bottle of wine as a “bon voyage” gift. He said if I couldn’t sneak him onboard, at least his wine could go on a cruise. How sweet! 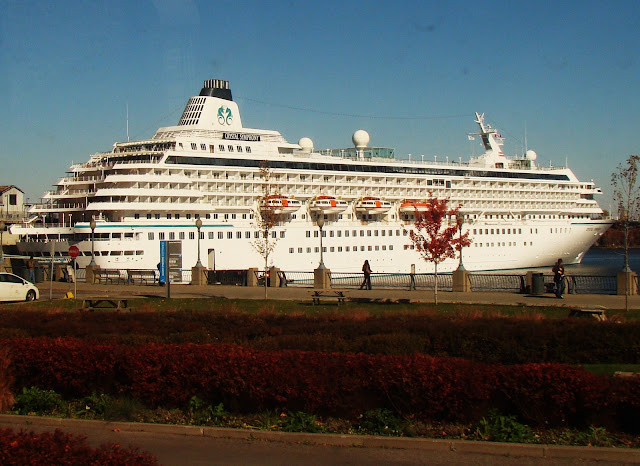 Symphony is docked at the Iberville Terminal (“shed 5”, which upon first impression appears to be appropriately named). A lovely young woman, with an infectious smile, greets you at the door in top hat & aqua color “tails”. From that point on, the streamlined check in process was “Crystal” all the way. The newly implemented “priority online check in system” works like a charm. I proceeded straight to the main D.R. for lunch. They seated me alone at a 2-top (which was fine). I had lovely table service from Shiv & Tiffany where I enjoyed a delicious appetizer portion of the fettuccini primavera (with steamed baby veggies in a light cream sauce) & the Cobb salad. I took a few sips of my champagne along w/ my crème caramel for dessert. 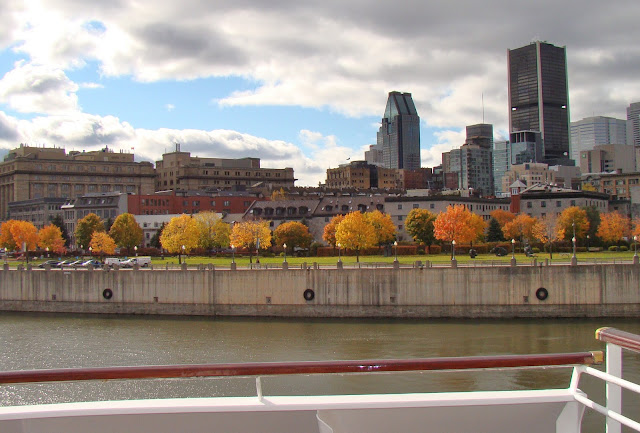 Then I was off to take care of some business & to kill time until our cabins would be ready (3 pm). I went to see Paolo who was set up in Prego about some alternative dining reservations for Silk Road on the 30th when my friend, Michael, comes onboard in Boston. Then I reconfirmed the name change for a group of 8 in Prego on the 2nd in New York. (The original plan was arranged by a dear friend, Judith, who unfortunately had to cancel due to health issues. So, she asked me to move the reservations to my name so that the evening she had so carefully planned would still happen.)

Then I went next door to see Norbert, the maitre d’, about the main dining room. I was indeed assigned to the Chief Engineer’s table (#51), late seating (8:30). I had the pleasure of dining with Iaonnis Adelfoulakas (he’s Greek) last year on the Serenity; & he’s an enchanting table host. I also wanted to request a copy of the dinner menu be sent to my cabin each day because I knew I was going to “eat in” some. (Not wanting to whine….but I’ve been feeling “not so well” the last 24 hrs. or so. Signs of a pending sinus event, possibly? This is, after all, a serious change of weather for me.) Knowing that the Chief only dines at his table on formal & (semi) “informal” nights, I wouldn’t feel too guilty about staying “home” some nights. (Sorry, future tablemates.) 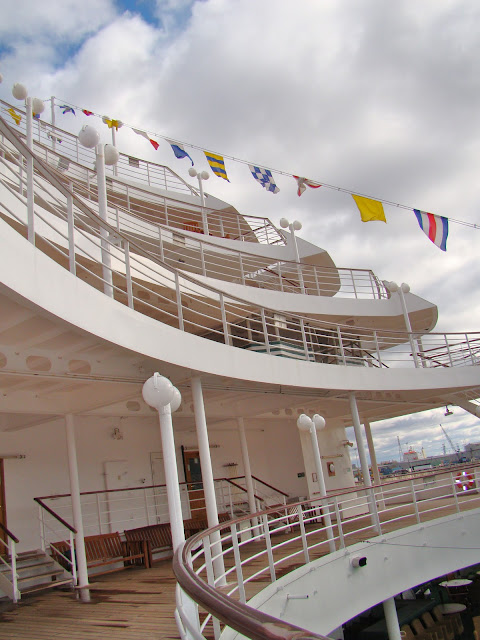 A quick stop by the Computer University to sign up for my internet pkg; & my business was done. Still more time to kill, I took a quick walk around the ship. Although I’m trying not to “compare” Symphony to the Serenity………there are enough similarities to make things somewhat “familiar”. But a lot of things aren’t where they’re supposed to be on deck 6. That’s going to take some getting used to. 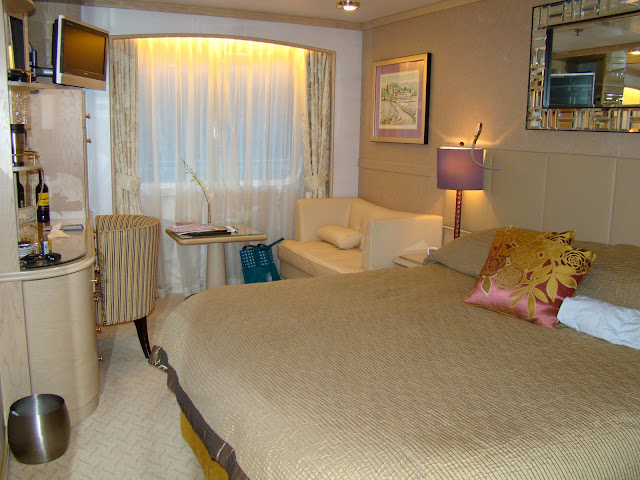 When I finally did make it to the cabin (about 2:30), I was a little taken aback by the size. My cat E (7054) is a little smaller than what I’m used to on Serenity. The “sofa-ette”, while being a lot better than “THE CHAIR”, is smaller than on Serenity. Leather, not cloth upholstered. The bathroom is markedly smaller. After giving this some thought, I realized that I am comparing this cat E to the cat C on Serenity. Both categories are the least expensive; but they are not meant to be comparable. As for myself, my budget won’t allow me to splurge; so I choose to go with the minimum cabin category so that I can cruise more often on a deluxe cruise line. With that said, I’m happy in my new “nest”. 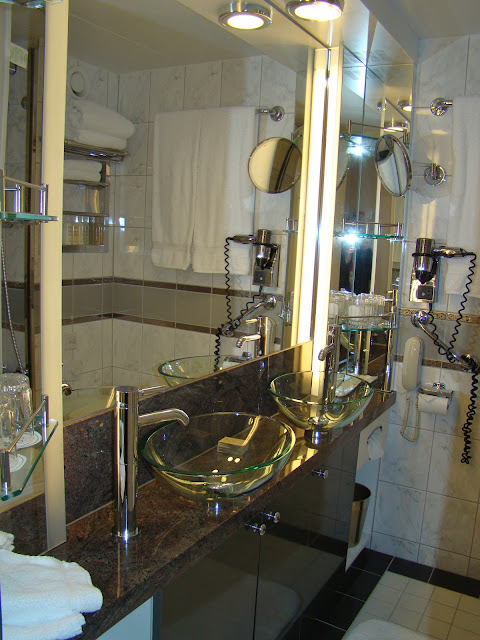 I immediately got the unpacking out of the way; pulled the covers back & laid down. I guess I dozed a little; & sort of jumped when I heard my stewardess tap on the door. Mag (short of Margriet) is an adorably, soft spoken young lady from South Africa. She immediately was concerned that I might be “sick”. I jokingly said that some people think I’m a little “sick in the head”; but that I was more in a “veg-mode”. Needing some peace, quiet & rest. I make my usual requests (sheet to put over the sofa, loose the bedspread, keep the ice bucket filled; & otherwise, I’m very easy to please). She said she’d bring me a D.R. menu so that I could order in tonight. I LOVE THIS GIRL ALREADY!

So, for all of you who were hoping that I’d find something wild & crazy to do my first night onboard……….well, you don’t know me very well, do ya? I was in my jammies by 7:30, editing today’s photos on the computer. About 8:30, Meg brought dinner. I started with a yummy Alaskan crab soup with melted brie cheese floating on top. My entrée was a very rare rib eye with Bearnaise sauce, grilled veggies (eggplant, zucchini & potatoes), & a darling “cup” made of phyllo pasty with baked beans. I tried a dessert that I’d never seen onboard before, “Peanut Butter Decadence” (and it was). A trio of PNB desserts; a baby scoop of PNB frozen yogurt, a “tower” made of 3 tiny chocolate fudge cookies with PNB ganache between the layers, & finally a molded chocolate ganache “blob” with PNB mousse inside. (This last one was listed on the menu as “PNB praline with PNB sauce”. But I must say that having a father raised in Louisiana, I know a praline when I see one. And there’s nothing “praline” about that dessert.) 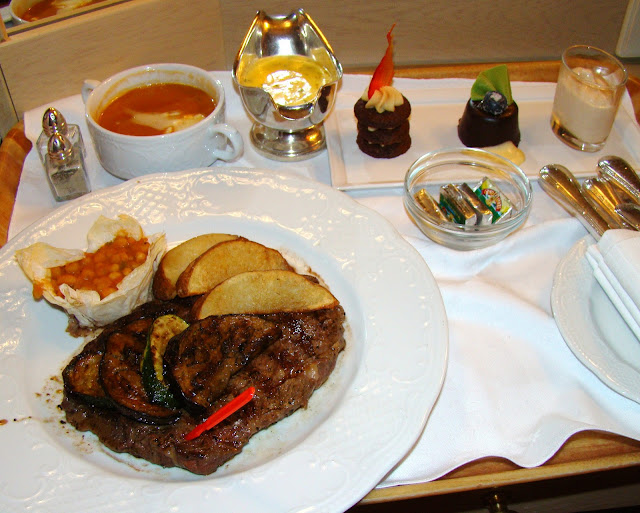 You know they used to say, “Life’s short…..eat dessert first” (I think it was Erma Bombeck). Well, I did eat the ice cream before it melted; but it took me the rest of the night & into the next morning) to eat that entire meal. It was divine. I did a little reading (brought the Kindle fully loaded with trashy, “chick” novels); & had lights out by 10:30.
Posted by Unknown at 12:15 PM