October 26, 2010
At sea-cruising the Atlantic
En route to Halifax, NS


Had a wonderful night’s rest. It was an unpleasant surprise to open the drapes; & see heavy grey clouds, rain & small whitecaps on the water. Better this happen on a sea day rather than in port. But a day, none the less, that I’d love to spend just wallowing around; reading a good book.

I went down to the Bistro for my morning capp’o; & then headed to the card room for bridge lesson #2. Not realizing that this was the last sea day of this leg of the voyage, this would be our final lesson. There were 4 new people in class; & you could tell they were a little lost. Well, so was I. It was as if I had fallen into a coma, woke up & missed an entire class. Yesterday, I left there confident that I understood everything she had taught me. Today, Brenda jumped right into “trump”, “no trump”, “double”, “redouble”. And I was thinking….what the hell is she talking about??? And I could tell this was really frustrating (9 yr old) Tegan. We didn’t even have enough time to get to the subject of bidding. You would think that they could have allotted more than just 45 mins, both days. But, we all did come away with a copy of the book, “Audrey Grant’s Introduction to Bridge Basics”. Maybe I should try classes again sometime…….like on a transatlantic voyage!

The Great American Buffet was held at lunch time today; & I had about an hr. to kill. So, I packed up the laptop; & parked myself at the Bistro. Nowhere in that room is a 110 volt A/C plug! I wanted to get the Quebec blog online; but ran out of juice before I made it that far. 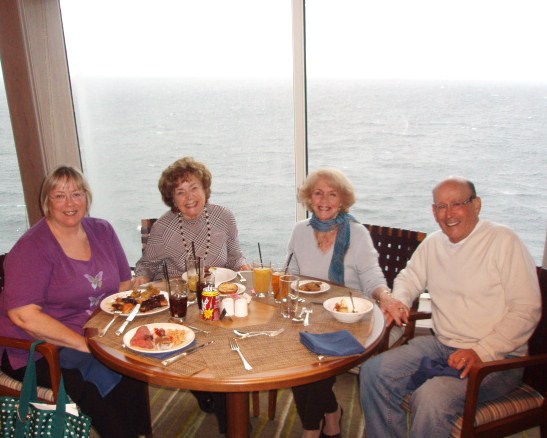 Sitting with Doris, Alice & Ralph (see the resemblence to Giuliani)?

I went up to the Lido buffet about 12:45; the place was packed. And for the first time I had to ponder whether it was a good idea for Crystal to do away with the service trays. One can balance one plate as you walk through the line. A plate & a bowl of soup, maybe not. They were so busy; there was no one to assist me. And there was no place to sit, other than out by the Trident Bar; & it was frigid a$$ cold out there. I just kept circling until I found a 2 top. Just before I started to eat, I saw Doris, Alice & Ralph; & they waived me over to their table. We had a lot of fun; & I barely made it through half of the food I had put on 2 plates. The rest would just have to go home with me for a snack later. 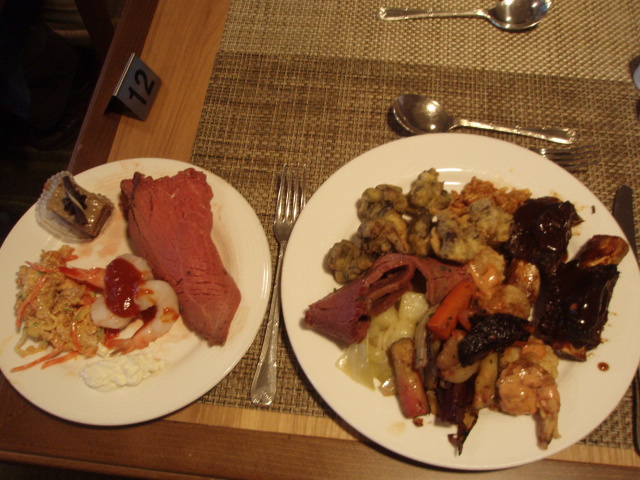 It's disgusting I know!

Now about that lunch……….I LOVE the American buffet……some great old standards & some interesting adaptations of traditional southern fare. Thankfully, since I’d tasted just about everything at one time or another, I knew what I wanted & what to avoid.

The main attraction for me is the BBQ short ribs with a nice (almost) crunchy, coating of the sweetest sauce. I also love their okra fritters, Southern fried chicken salad & the perfectly spiced jambalaya. The corned beef unfortunately was sickeningly salty today. I love whatever the seasonings are that they put on the oven roasted vegetables. The prime rib was okay; but lacked any real flavor. And the bowl of (supposedly) cream horseradish wasn’t. In fact, it tasted more like sour cream to me. I took a tiny 2-bite size sampler portion of the “turtle cake”; & it was marvelous. Tasted similar to German chocolate cake; & was just enough to offset the flavors of the other heavy foods.

Doris asked if I was planning to come to the D.R. for dinner; & I said “probably”. I probably shouldn’t have done that. As the dreary day progressed, I had a feeling I was going to eat in. I tried to get the blog uploaded; but we’re still having issues intermittently with the internet service. I laid down with my book until it was time for the Cruise Critic cocktail party. There were about 16 of us signed up; but it ended up being only 6. We met on the port side of Palm Court at 5:30; & they provided appetizers & drinks. 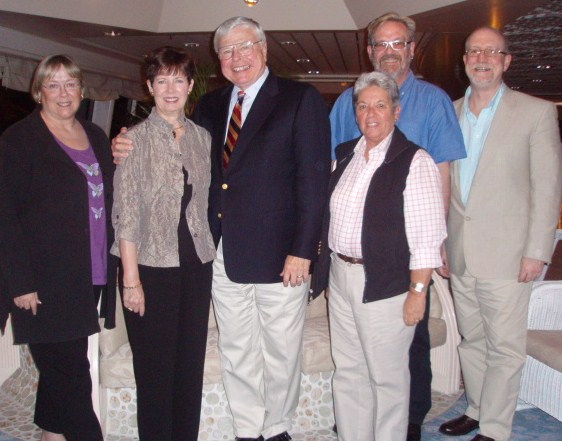 In attendance were Peggy (xrvlcruiser), Bill & Carolyn (Wrobichaux), Chris & Steve (CandS) & myself (Liv4cruzin). I so enjoyed getting to know a little about these fine folks. Chris & Steve had started their adventurous journey weeks ago from Australia. They had already trekked through Europe on their way to Montreal. Coincidentally, Chris & Steve already knew Bill & Carolyn; having met on a Crystal cruise out of Hong Kong 3½ yrs ago. Although this was Peggy’s first Crystal cruise, she has an extensive background of cruising on many other luxury lines. Their travel stories were quite interesting, especially since they’ve been to so many places I’ve never been.

Throughout the 2 hrs, various Officers stopped by to say hello. First, Nikki Andrews (Onboard Cruise Consultant) came by with Yvonne (Chief Accountant). Captain Giske & one of his Jr. officers came by & spoke ever so briefly. Josef Matt (Hotel Dir.) & Victor (Food & Beverage Mgr) visited a short while. Last, but certainly not least, Paul McFarland (Cruise Director) came & spent a good while with us. This is the first time I’ve met him; & he’s a delightfully, interesting man. He had just finished taping one of his shows (for onboard TV) with Tim Conway (actor/comedian); who happens to be cruising onboard just as a passenger. Wonder where he’s been hiding out? Who knew??? He also shared in great detail how a new musical production at sea is “born”. Everything from designing costumes, to blocking the stage to accommodate the motion of the ship; & to reworking a number in case someone gets sick or injured. Obviously a lot more goes into it than I ever realized.

The party broke up about 7:30; & I’d already made the decision to order dinner in. By now, I’ve gotten 3 days behind on the blog; & that’s bothering me. With the daily tour schedule, the issues with the internet & all the photo editing, I hope I can dig my way out before it gets any worse.

I gave Mag my dinner order about 8:30. Since I already had leftovers from lunch, I didn’t really NEED any dinner. But there were a few things on the menu that I just had to try. The corn bisque with bell pepper & leeks was excellent. I had an appetizer portion of the pasta special, Spaghetti “Prince of Naples”. It had been tossed with a light tomato sauce; plated & then topped again with half porcini mushroom sauce & the other half with Bolognaise sauce. The mushroom sauce surprised me; I loved the flavor. I also asked for a side order of the featured veggies: gratinated cauliflower, green beans wrapped with bacon & smoked onion pudding. I had to admit that my green been “bundle” recipe is much better; but the onion pudding was divine. I would hardly call it “pudding” as it was formed into wedges & cooked like Southerner’s would do cornbread (in a divided skillet). Needless to say, there were now even more leftovers to have tomorrow. 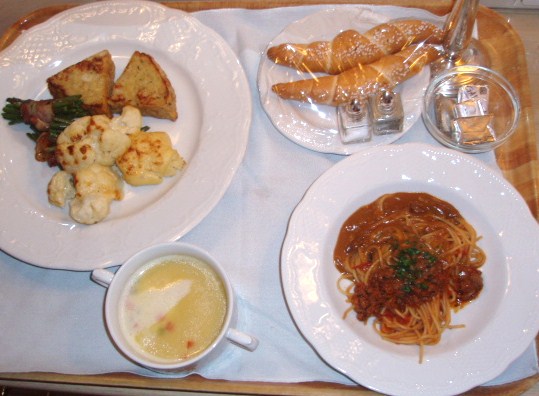 I did a little work on the computer; & intended to lay down for just a bit about 10:30. There’s some nice wave action going on out there; & I was out in no time. Woke up about 1; & turned the light out. Guess I’ve finally gotten used to the hard bed; & the rocking of the Atlantic Ocean is finally working it’s magic.

Again since it was a slow news day......a few extra photos from Quebec City: 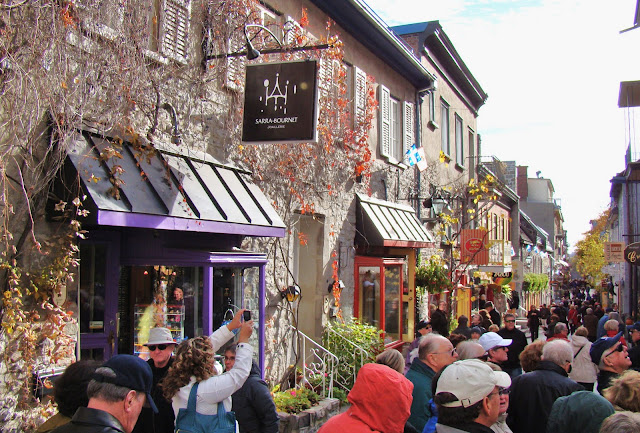 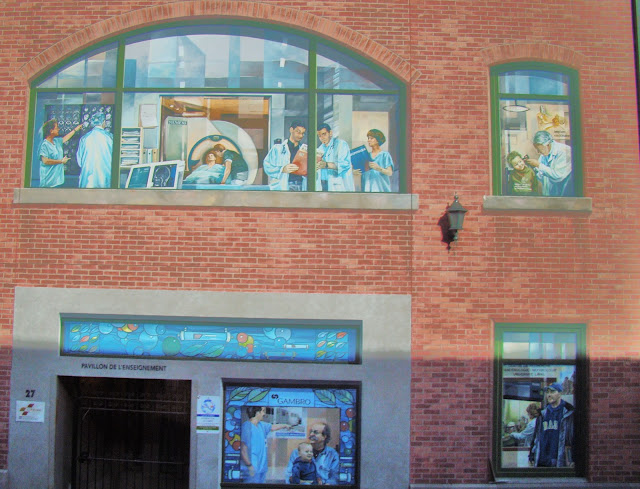 More trompe l'oeil murals on what appears to be a medical building. 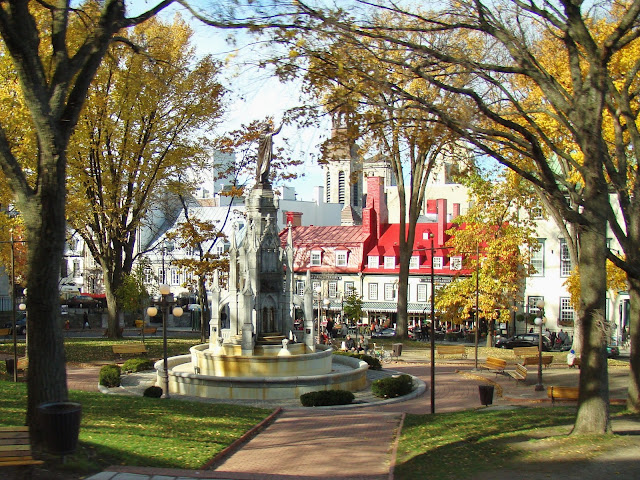 A quiet square in the "upper city". 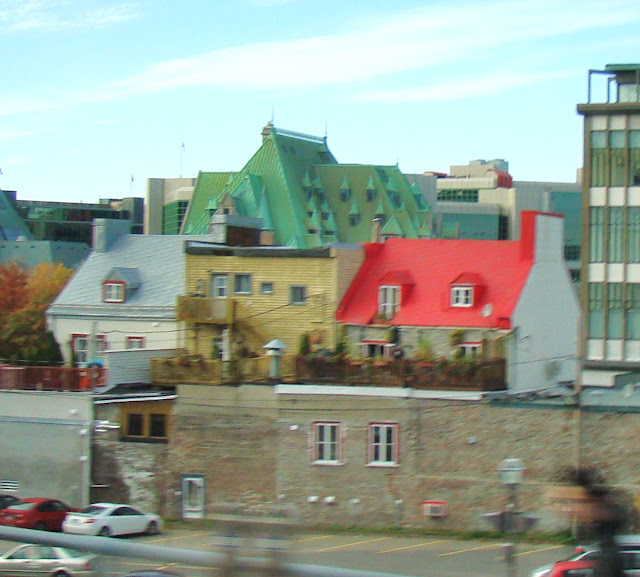 Although this was taken from a speeding bus window, I was kind of intrigued by these 3 houses that were built on top of an existing building.
Posted by Unknown at 4:04 PM

Girl, I have so enjoyed your trip. Why didn't I know you did this on other trips...I feel just like I went with you. What a lift after 10-12 hour work days. Thank you for sharing your photos and thoughts. I have loved peeking in each day. I love you Becky. Kathy Clements