I don’t think anybody knows what the weather’s going to be from one day to the next. According to the “Reflections” (the daily program), it was supposed to be cloudy with a high of 39. Well, how about mostly sunny & 50? Unlike yesterday, which I later learned, brought 4” of snow just outside the city. My continuing thanks to the weather Gods! 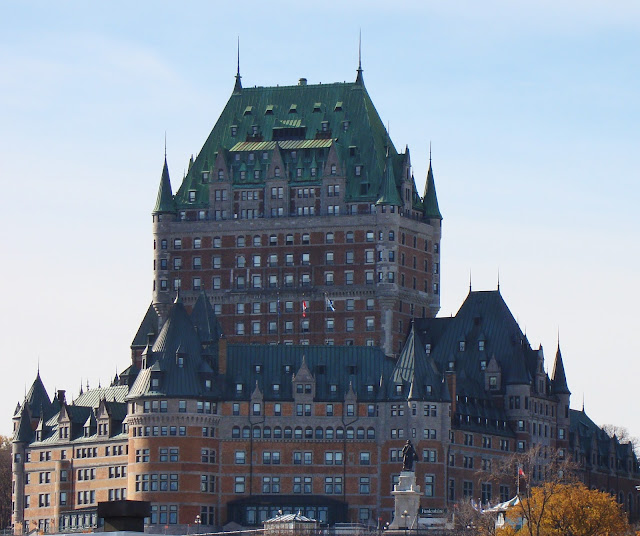 When I awoke about 8 am & looked out my window, I was immediately in love with Quebec (after I got over the shock of the window pane being ice cold). The beautiful blue, blue sky; the old European skyline; marveling at the majestic Le Chateau Frontenac Hotel towering above us from the “upper city”. I just prayed the weather would hold out. 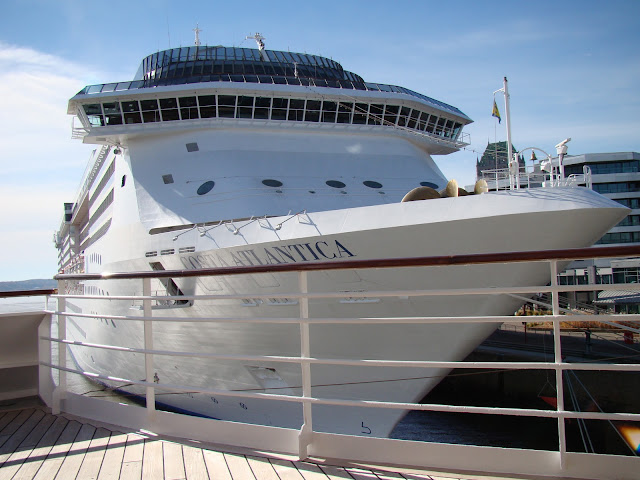 I took the laptop down to the Bistro for some cappuccino & some fruit. I sat a couple of hours people watching & doing some “work”. When it got a little warmer, I took a stroll around the promenade deck with camera in hand. As I rounded the stern, all I could see was white metal. It took a few seconds to register that it was the bow of another ship. It looked as if the mega-ship, Costa Altlantica, was about to devour the much smaller Symphony. I would never refer to any ship as being ugly; but no ship should be that friggin’ big.

I had to meet my tour group at 12:45; so I was scouting out the fastest place for a bite of lunch. The Lido buffet looked promising. I was in & out in less than 20 mins. I had some hearts of palm (I’m obsessed with this stuff); a few slices of grilled portabella mushrooms; little teeny cubes of roasted sweet potato; a taste of a cold salad made with baby mozzarella & friend mushrooms: & several fried jumbo shrimp & humongous sweet scallops, served with remoulade sauce. Excellent lunch.

Quick stop in the cabin to pick up my bag; & we were off on the Quebec City Highlights tour A-1. Today’s guide was Gretl (unusual spelling, I know); & her driver Jacques (Bus #8). I was spoiled by Annique’s style yesterday in Montreal. Today I had to concentrate too hard to understand poor Gretl’s heavy accent. She did talk about the sites that we were coming upon; but she never told you which side of the bus they would be coming up on. But I had my trusty back row seat; & was darting from one side to the other. I finally decided to tune her out; & just focus on the visual beauty before me. There were 2 elderly ladies that gravitated toward the back of the bus; & we had lots of fun chatting. They were concerned that their mobility issues would present a problem for the group as a whole; but they did fine. I was also thankful for this given my achy knee affliction. 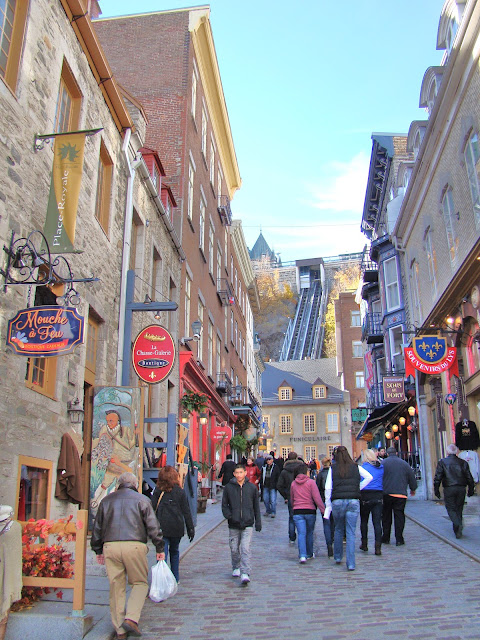 We drove just a few blocks inland; parked the bus & then proceeded on foot through the Place Royale (“lower town” area). It consists of a grid of charming, narrow, cobble stone streets with the most beautiful store fronts & dining venues. Even though it was a Sunday, they were open for business with the 2 ships in port. (Speaking of which, the Symphony & the Costa Atlantica will be the last passenger ships to call here this year.) Occasionally, you’d happen upon little plaza/campo like areas where people were congregating outside after mass at Notre-Dame des Victoires; walking their dogs; children playing; folks sipping drinks in sidewalk cafes. It’s easy to see why UNESCO declared Quebec a World Heritage Site. 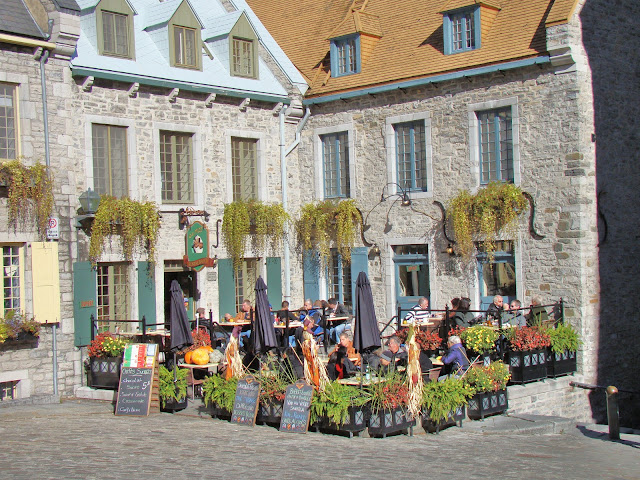 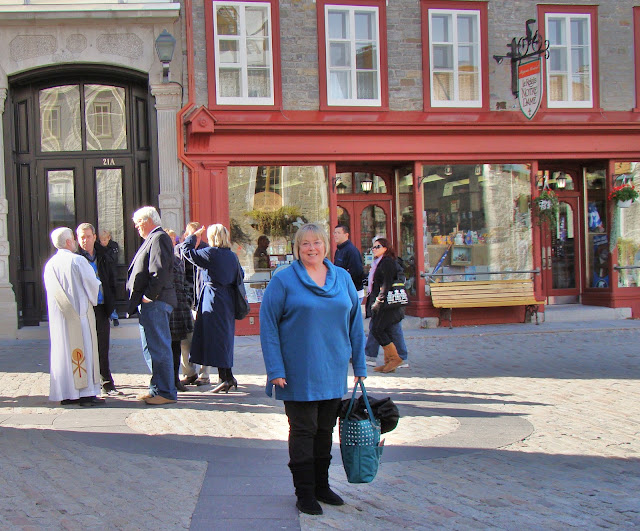 I was taken aback by all the Halloween décor; they must take it seriously here. I noticed street lights topped w/ pumpkins, streetlights draped in sheets like 15’ tall ghosts & a huge cobweb & black spider clinging to the front of a restaurant. It being Sunday (& the weather so nice), the streets & public parks were crammed with families; pumpkin patches & street performers. Gretl took great care to keep the walking pace slow enough for everyone with stops every 5 mins. or so to point out details & let everyone catch their breath. Those of you know me REAL well, know that if I’m moving around; I’m going to be hot! Most of the afternoon, I only needed my sweater. Every now & then, my nose would get cold; so I’d wrap the wool scarf around my neck (& then my glasses would fog up-such problems). 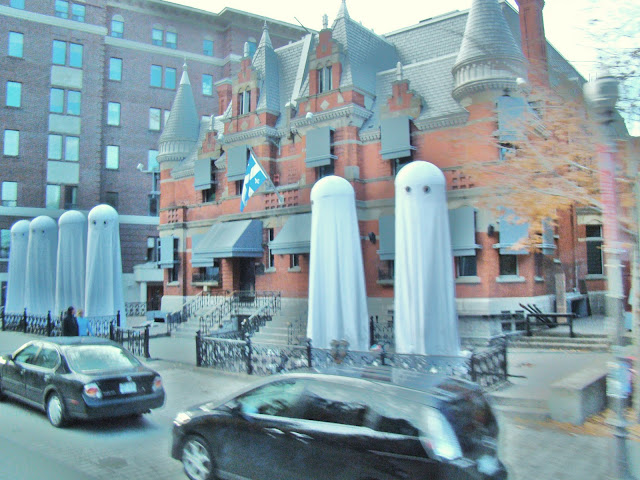 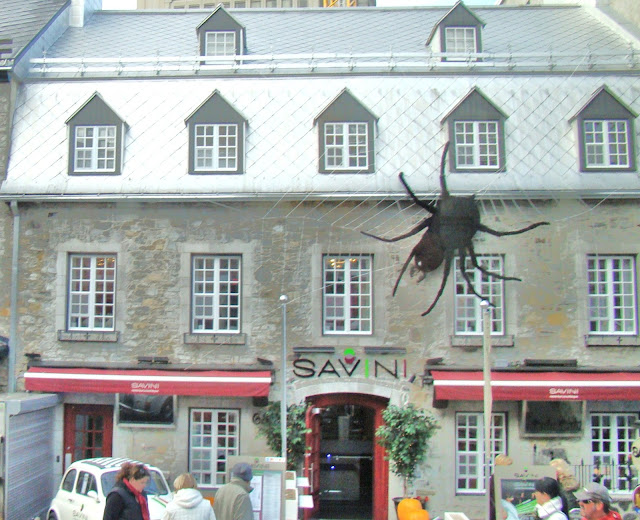 I notice that (like in Norway), they place ladders on the roof on which to steady themselves while cleaning off the thick, heavy snow. 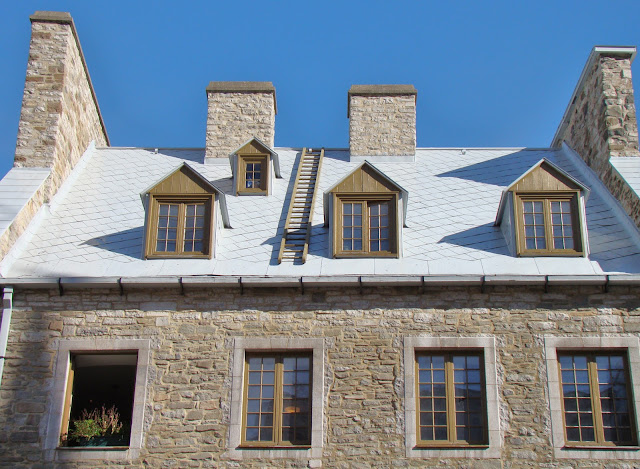 There was a treasure around every turn.  We happened upon this beautiful mural, appropriately entitled "Mural of Quebecers".  Taking in each scene seperately, this outstanding work in trompe l'oeile, depicts life in Quebec throughout the centuries 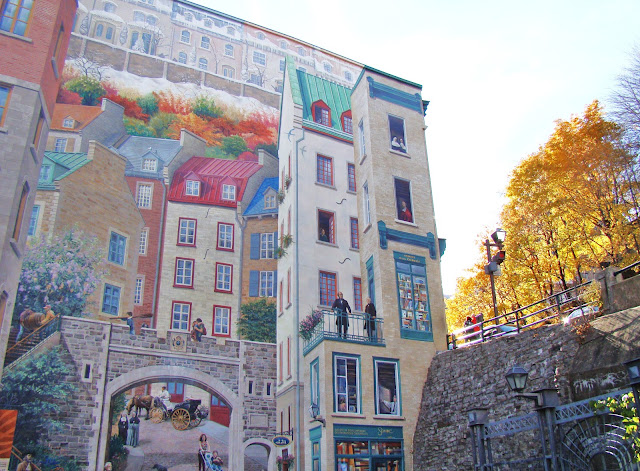 This "street performer" scared quite a few of the ladies who thought she was a statue. 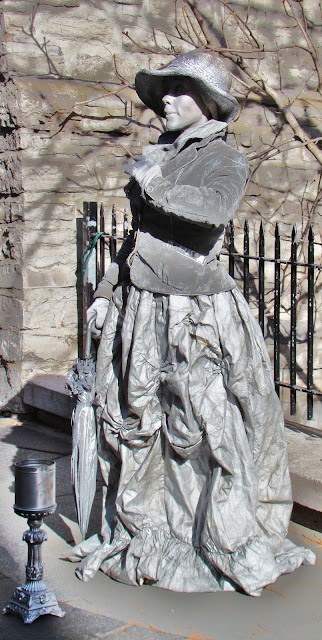 Back on the bus, we proceed to the “upper town” area; making serpentine like turns through various commercial & residential areas. They dropped us off right beside the Frontenac Hotel by the funicular observation/lookout point. Again quaint, cobblestone streets lined with cafes, shops & the occasional clip-clop of the passing horse drawn carriage. I really felt as if I was far across the Atlantic in some exotic European county instead of somewhere in North America. 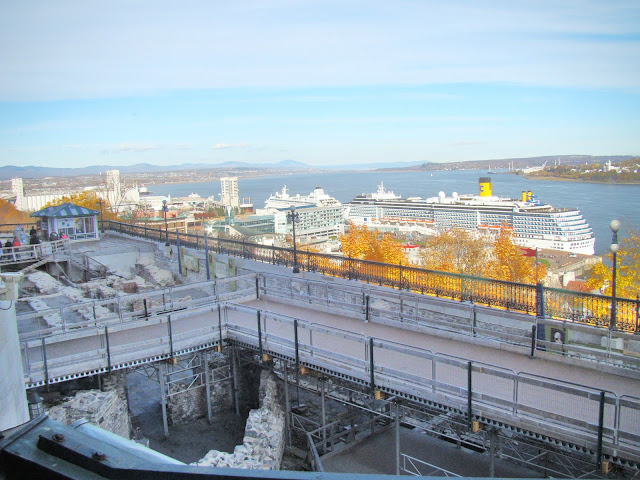 I first stepped over to the scenic lookout to take in the expansive view. I could see some archeological digging taking place on the hotel property & far below, the harbor (with the Costa ship’s nose right up the rear end of Symphony). I’m sure the ride up in the funicular would have been exciting. 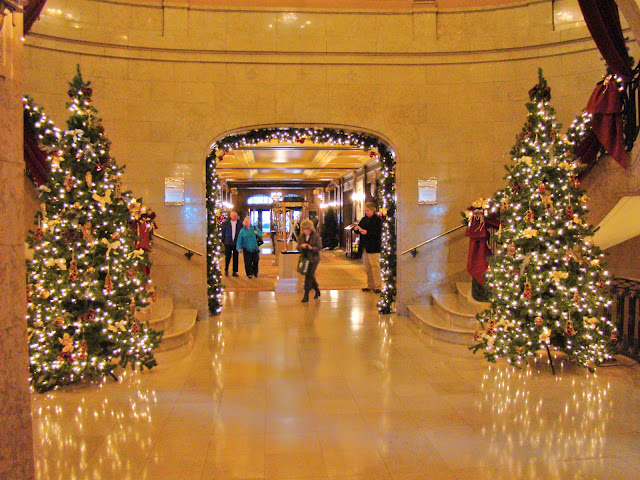 Since I wanted to at least go into the hotel, I did that first while I still had plenty of time. I entered from a side door, right next to Starbucks. This brought you directly into an underground hallway of shops. They were already decked out for Christmas! I looked in a few windows; & then proceeded up a marble spiral staircase up to the next level which housed the lobby, a few bars & restaurants. The lobby, although not as “ornate” as I would have expected, was very “grand”. And the guests coming through the revolving front door in their fine furs reeked of class & money. The bellman standing tall in their morning coats & tails were standing proudly next to their shiny, brass luggage trolleys. It was kind of like I’d stepped into a Dicken’s novel. And I’m sure I looked rather conspicuous to them, walking around with a camera glued to my face. Oh well, when in Quebec…..act like a tourist!!! 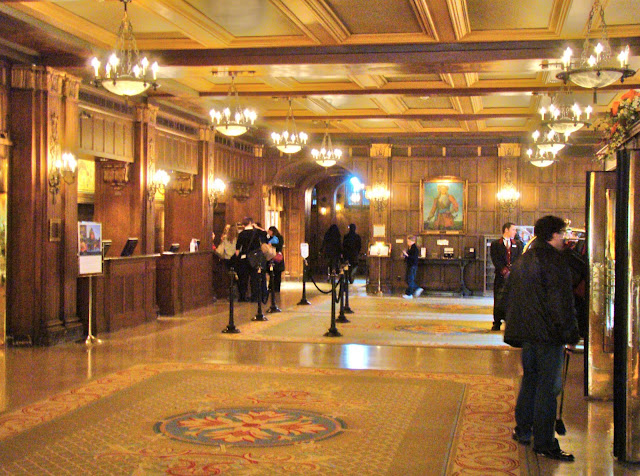 I knew there wasn’t much time before the bus picked us up again; so I hurried out on the street to take in the street scenes. I sat for a few mins, in a park area that surrounded a fountain & statue of (somebody). The angle of the bright sun was filtering through the golden trees. Listening to the horses’ hooves; it was magical (& getting chilly). 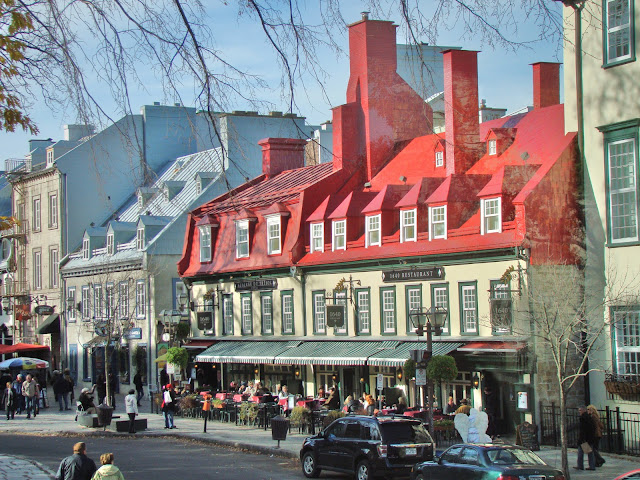 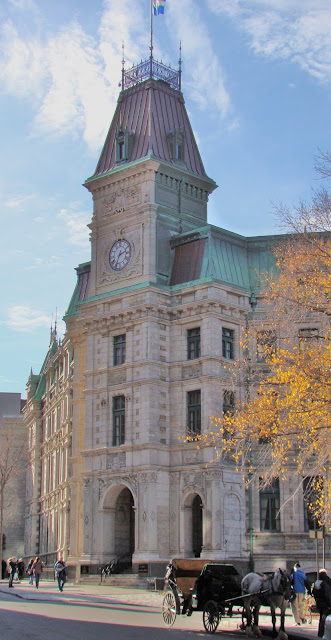 It was about this time I said to myself, “I’ve got this fancy new phone….why don’t I try to take a picture of this glorious afternoon & post it on facebook?” Taking the picture was easy enough; but how do you send it. I played with all the menus; thought I sent it; checked FB, didn’t see it there. I got back on the bus; & made an appeal to anyone who was smart enough to understand a “smart phone”. Thankfully, a young Australian crewmember who was helping escort the group (think his name was Anthony) came to my aide. He had a few issues; but suggested that I wait till I got back to the ship to try to resend it. He didn’t want me to miss out on the remaining sites of the tour. Wise young man! 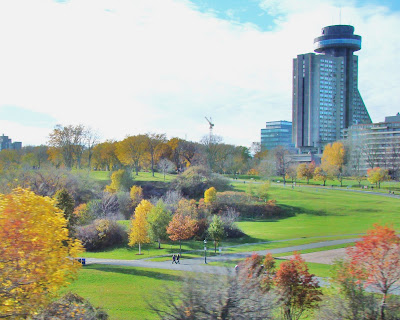 Leaving there, we headed southwest toward the Parliament bldg, the Citadel & the “Fields of Abraham” (the site of a famous battle between the French & the English in 1759).


We made a short stop at an observation point called “Governor’s Promenade”. By this time (close to 4) some high clouds had moved in; the light dimmed; & it got much cooler. The photos from up there were lackluster. 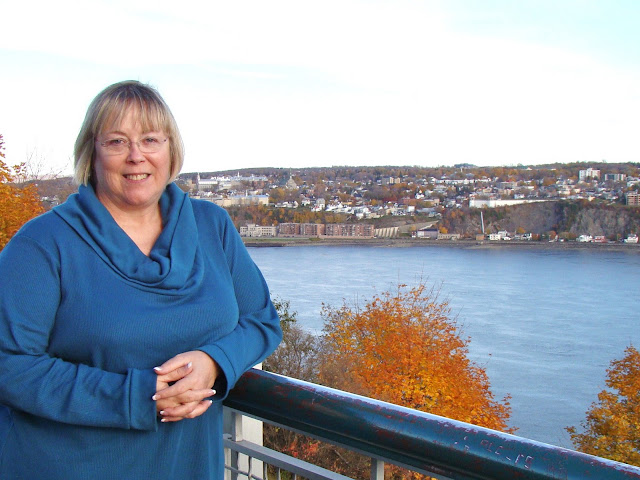 When I got back on the bus, I could tell that one of my lady friends had been crying. She had just gotten a phone call saying that her husband had had a heart attack; & that she should get home as quickly as she could. My heart just bled for her. You could see the guilt she must have been feeling for this to happen when she wasn’t with him. Timing is everything; & the fact that we were in port until midnight, she had a fair chance of getting home quickly. The next 2 days we would have been “at sea”. Life can change in an instant.

We returned to the ship about 4. By now I was chilled & pooped. I knew I was staying in tonight. Mag came in about 5:30 to bring me ice; & I mentioned that the refrigerator wasn’t getting very cold, no matter what setting I put it on. She placed a call to maintenance; & within 10 mins, they were here. They decided to bring a new one (like they just happen to have lots of spares sitting around somewhere below decks). I got comfy; & sat down with the hundreds of photos I had just taken. And for this reason, the blog update is coming a little later than usual. I stayed at it until I got bleary eyed; & took a dinner break.

After studying the menu, I left a note for Mag outside the door. She goes off wherever it is she goes; & just like magic, comes back very shortly with a tray piled with luscious looking food. For tonight’s dinner I had an appetizer portion of the pasta special (Rigatoni Pasta all Emiliana), which was topped with tomato sauce, sautéed onion, bacon & fresh herbs. A rich hearty flavor; divine! Always in need of a “hunk of beef” fix, I went with the prime rib (rare); unfortunately they forgot the horseradish. It was accompanied by a baked potato & a cute molded (blob) of broccoli “flan”, which was also delicious. For dessert I ordered a cheese plate with some fruit (which I was too full to eat & put in the fridge for breakfast tomorrow morning).

I was hoping for some basketball on TV or at least a good movie. Finding neither, I went back to my (Kindle) book. We pulled up the gangway & set sail at 11:59 pm. I’m only guessing as to why that exact departure time was chosen……..maybe if we stayed till a min. after midnight, they would charge us for “another day”??? I watched sailaway from my cabin’s window. The city was all light up. The Frontenac Hotel on the hill looking like the “emerald city”. One of the warehouses next to the docks was illuminated in hundreds of vertical purple & pink neon lights. Sorry I wasn’t able to photograph that. Yet again, because of the late hour, no Louis Armstrong farewell.

We have to run our clocks forward one hour, to Atlantic Daylight Time tonight. I read until my eyes would no longer focus, about 2:30 (new time). It was indeed another magical “Crystal” day!

SPECIAL NOTE ABOUT PHOTOS TAKEN IN QUEBEC:  Because of the angle of the sun late in the day, there were very dark shadows; & the "fill flash" feature failed me.  A lot of the photos were greatly manipulated to lighten the shaded areas.  For this reason, some of them appear "grey & somewhat grainy".  My apologies; I'm not happy about it either.
Posted by Unknown at 9:19 AM

Becky,
Great photos, I'm bringing a new camera on 0226 you may be able to give me some tips
Philip

Have been following your blog. You certainly have a flair for writing and photography. I particularly enjoy the descriptions of your meals, it makes my mouth water.

Look forward to meeting you. Perhaps will see each other at the Meet and Mingle on Novemember 3.