I had the most amazing night’s sleep; didn’t want to get up. And now a relaxing day at sea. Seas are about 6-7’; so it’s just the right amount of rocking. I rushed to the D.R. to get breakfast before they closed. I have been craving eggs benedict; but somehow forgot that when I ordered. On my very first cruise in 1968, I had kadota figs for breakfast. Coming from small town TN, that was just the most exotic thing I’d ever heard of. Well, it is a cruising ritual ever since; I must have figs at least once during every cruise. They’re still the same old canned figs in heavy syrup you can buy at home; but you gotta have ‘em. The asparagus omelette topped w/ creamy morel mushrooms caught my eye; it was delicious. Then I had to try Leslie’s favorite Crystal breakfast, peanut butter & jelly French toast. True, I don’t eat peanut butter; but these have the tiniest bit of PB spread on the bread before it’s fried. Served w/ some strawberry puree & a dollop of chocolate sauce. Divine!

Almost time for team trivia (10:30); so I made a stop at the Bistro to get my triple cappuccino (brain food). Everyone from our previous team showed up; & we came in 2nd. Where, oh where, do they get these trivia questions. What is the largest animal w/o a backbone? Giant squid. Who placed the first phone call to the moon? President Nixon (that was the easy one). The prizes are pitiful; we would want to win for the prestige only
.
Came back to the cabin to read until time for lunch (God forbid, I should miss a meal). I joined L & L who had started w/o me. Since it was a sea day, there was another themed buffet lunch around the “indoor” pool. It was Latin; & I was really wanting tamales. They had none. Bummer. So I had a big helping of hearts of palm (can’t get enough of that) & tried the purple potato & seafood (squid & baby shrimp) salad w/ apple Serrano chile vinaigrette. Believe me, the color was prettier than the salad tasted. I then had a small chicken enchilada & small beef fajita (both yummy). They usually have flan on this buffet; but for some reason today it was crème brulee (?) Never can pass up one of those; & this one had the thickest layer of crystallized sugar I’ve ever encountered. I tried to be good, only eating the crunchy part.

The weather was so perfect today; & we were able to find a nice spot in the shade where it was quiet. The 3 of us piled up in deck chairs engrossed in a book. The wind started to feel cool about 4:30 so it was time to come in. Leslie & I left Larry sound asleep in his chair. Here it is day 3 & I finally ran into my all time favorite crew member; deck waiter, Benjamin. He like everyone else here calls me “M’am Becky”. He is the best; & finally after 10 yrs. w/ this company, he was voted 2007’s Crystal employee of the year. Richly deserved. Each time I come onboard, he never forgets my name or that I like for him to mix a cherry coke out of the maraschino cherry juice jar they use at the ice cream parlor.

I laid down for a little while before getting ready for dinner. Tonight we (L&L, Harvey & I) had 7:30 reservations at Prego (Italian). There are so many fabulous things on the menu, you can eat there 3-4 times per cruise in order to get around to everything. We had them make a large plate of bruschetta. The 3 times we’ve ordered it, there has been a little something that’s just not right. One time it was almost like they’d topped it w/ a sweet relish; 2nd time they used shaved cheese on top (shouldn’t have any cheese). Tonight’s was very salty; but nice a garlicky. So we called the Head Waiter over & told him they just don’t make it like they used to. He said there are Filipinos back in the (Italian) kitchen! So, he went back & personally made an outstanding batch. 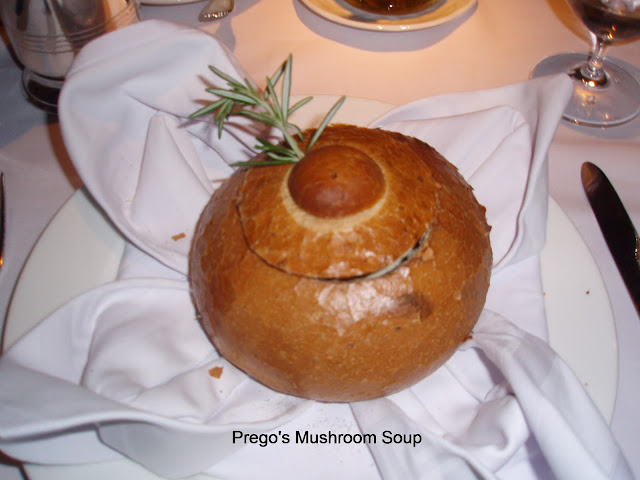 The chef sent out (as an apology) an appetizer of sliced morel mushrooms marinated & sautéed w/ a little cube of mozzarella & half a grape tomato garnish when little swirls of a thick balsamic vinegar reduction. Divine! I ordered 2 large seared sea scallops that were wrapped with strips of zucchini over a bed of pureed pumpkin. Followed by their signature cream of Italian mushroom soup which is served in a “cup” made from oregano flavored bread. Leslie shared some of her entrée w/ me which was the evening’s special; a thick grilled swordfish steak w/ a chunky salsa made from eggplant, tomatoes, papaya, capers & olives. I could have eaten a bowl of the salsa as a soup. My main course was the osso buco “Cremolata”, a huge veal shank braised w/ a ragout of mixed vegetables, tomato, porcini mushrooms & fresh herbs. It was served w/ risotto Milanese, which in essence was risotto in a mushroomy, cheesy sauce. Both were outstanding. I was so stuffed; & didn’t want to waste any of it. So, I had them wrap it up; & I’ve brought it “home” so I can have it (cold) for breakfast. For dessert, I had traditional favorite, crema di cappa (a small pot of coffee cream flavored custard w/ a little dollop of whipped cream & a chocolate covered coffee bean for garnish). It’s served in this beautiful demitasse cup, just the right amount to put a sweet taste in your mouth. I’m stuffed.

None of us had any energy to do anything but go to our cabins at 9:45. It takes a while to get undressed & unmade up, put your clothes away, read tomorrow’s activities, type this travel diary & finally going online to read my e-mail, read the Naples Daily News, & see what happened on The Young & the Restless today. The ship has been gently rocking all day long; should be good sleeping. Tomorrow morning we arrive in St. Barts for a 15 hr. stay. Until next time…..
Posted by Unknown at 10:32 PM