Well, things have changed since last we spoke. One, we lost at trivia yesterday; & secondly, we’ve finally set foot on land. So, Sunday was either a good day or a bad day depending on how you look at it.


We won on Fri. & Sat. Questions seemed to be harder on Sat. For example: name the smallest fish in the world (Goby) & dolphins can jump how high out of the water? (20’). Yesterday’s trivia was questions that had been asked in the earlier games during the cruise. So, how could we possibly have done worse on this one? Both Bea & I had new injuries (more later); & (brainiac) Steve was stressed because his bank had blocked his Visa card. He had spent an hr. trying to get it straightened out, to no avail. So, we were not in game mode. When it was announced that we came in 3rd, there was a collective gasp in the audience. That was followed by whoops & hollers. But we showed them who had class by giving the wining team a standing ovation. To lose a game where we already “knew” the answers was total embarrassment.
I slept terribly Sat. night; so I was awake as the twinkling lights along the coast of Madeira got closer. There was a lot of noise on the deck below me as they unscrewed the opening in the side of the ship for the pilot to board. I ran to the window to find myself eye to eye w/ the pilot boat about 6 am. As we got closer the (almost) full moon was setting over the mountains, very beautiful. Sun doesn’t rise til almost 8. It was drizzly early; but turned into a gorgeous day (65). 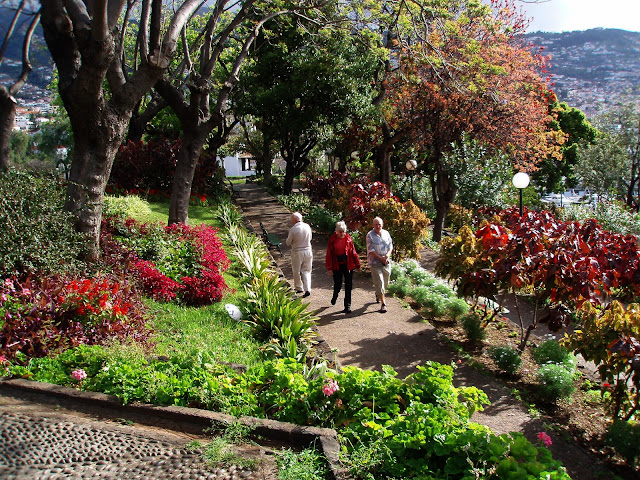 I took the “Highlights of Madeira” tour. The guide was a bore. He made an unexpected stop at a public park/garden & wasted valuable time describing every tree & blade of grass. They next drove to the bottom of the cable car/funicular that would take us up to Monte. 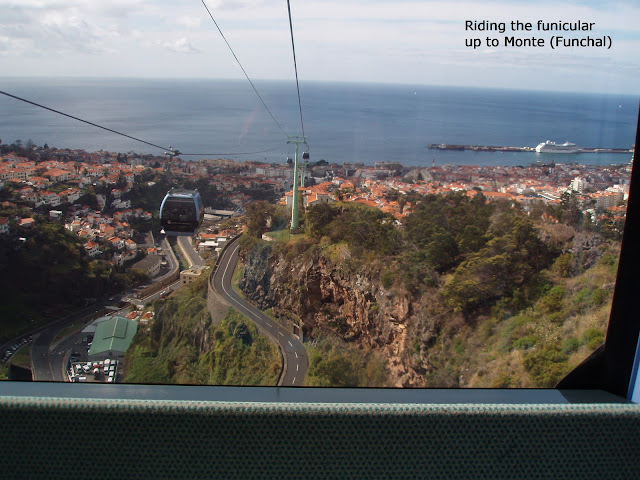 Great views of the city & harbour. You could look down into the yards of the tiny houses & see the massive rock layer they had to blast through to build those winding roads. I believe the roads are more winding than on the Amalfi coast. 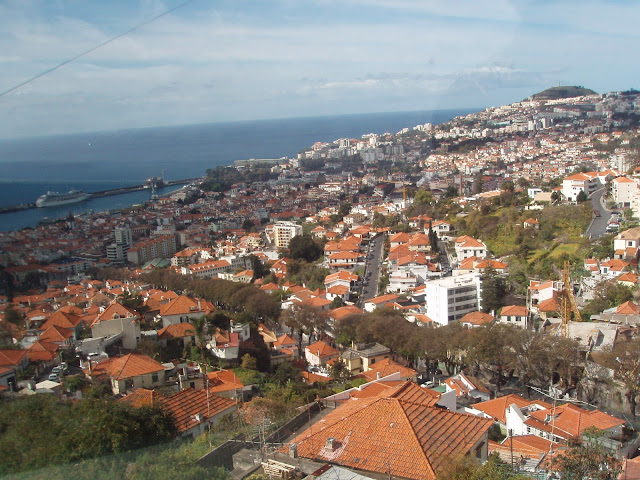 From there we walked around the perimeter of Monte Palace. You could see down into their gardens which looked beautiful. We stopped at the base of a beautiful church so we could watch the crazy folks who were doing the basket sled rides down the steep streets. My friends Steve & Pat (from trivia) were standing in line. She said it was lots of fun. 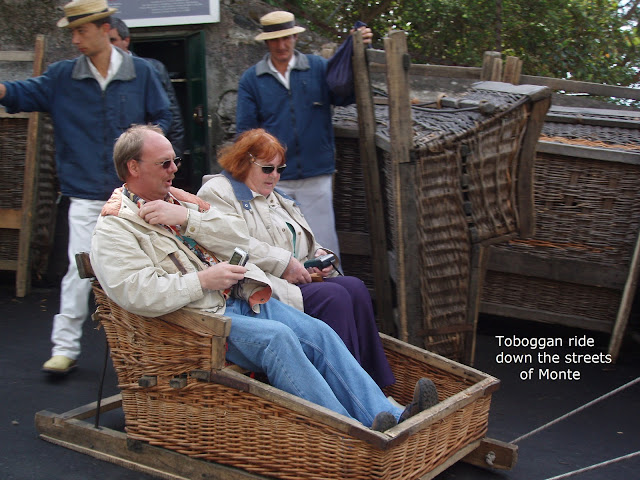 I noticed that the sled pushers/guides (dressed similarly to Venetian gondoliers minus the stripe shirts) are as handsome as their Italian counterparts. Must be a prerequisite. 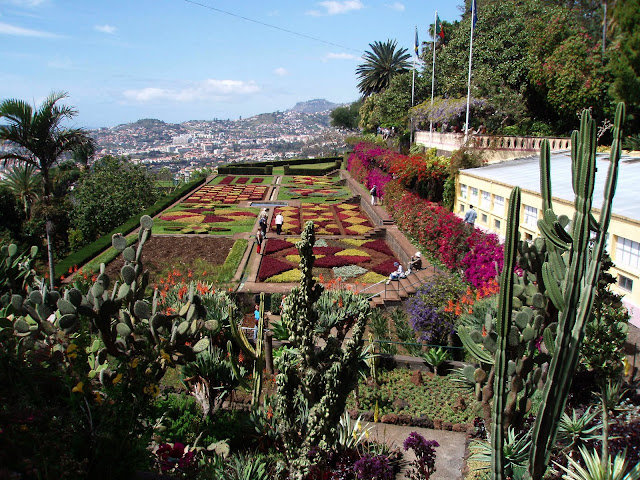 We finally made our way to the Botanical Gardens (the anticipated highlight). The guide babbled ad nauseum about nonsensical facts. We kept walking ahead of him hoping that he’d get the message that we weren’t interested in the history of EVERY tree. We only had so much time; & it was obvious that we would be out of time before we got to the formal gardens. So some of us wandered off & made some rewarding discoveries. 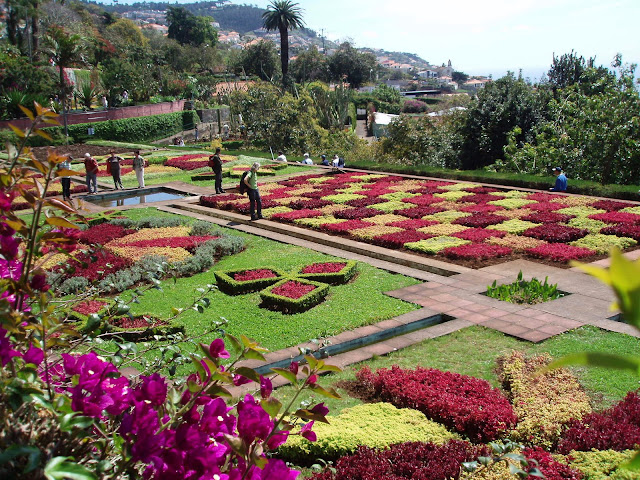 I was drawn to the sound of a waterfall where I found a huge swan paddling around in a pool below. Then I discovered a hidden topiary garden (both of which the rest of the group never got to see). 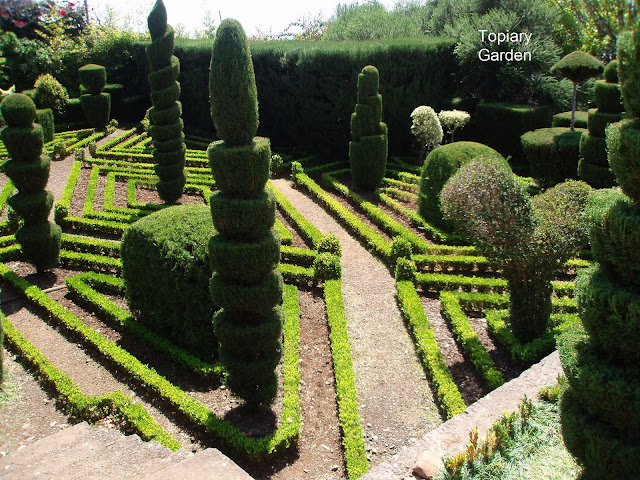 While walking around the perimeter of the formal gardens a few of us were injured by loose pavers on the path. In my case, one slid off the edge & then fell back on my foot hitting the inside of my right ankle. By the time I got back on the bus it was swelling. The last stop was the obligatory embroidery factory & shop. The walking wounded & very elderly stayed on the bus. The driver was so sweet. He ran into a bar & got a bag of ice to put on my foot. The swelling has gone down but the side of my foot is purple & green & very sore. For that reason I’ve decided to cancel my all day tour of Seville since it was listed as very strenuous. With that & the remains of my knee problem, I doubt that I could make it. 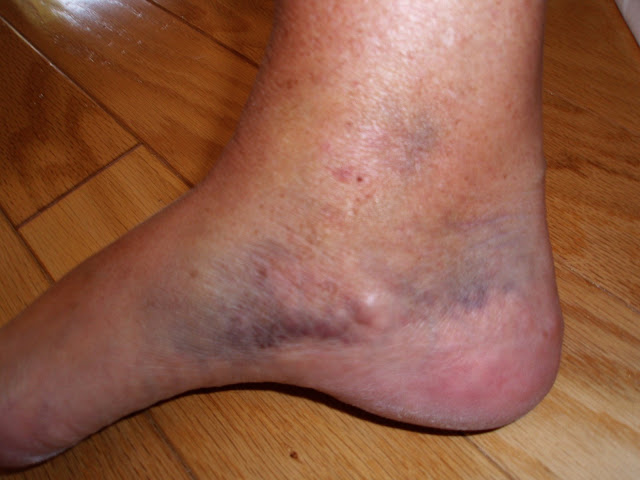 I did get to meet w/ Leslie’s friends who are sailing onboard. I sat w/ them at the Oceania Club cocktail party. What a lovely couple, been everywhere & had great stories to share about their travels w/ Leslie & Larry (my Crystal friends from Boca). Since I had to dress up for that party, I made it to my first dinner in the D.R. on Fri. Had a fabulous lobster/mushroom/spinach cake encased in phyllo, an appetizer portion of spaghetti pomodoro & a beautifully presented entrée of grilled scallops on a bed of risotto.
And while we’re on the subject of food…..had a great Oriental lunch the other day. Wonderful Thai beef salad, chicken satay w/ peanut sauce & vegetable/Chinese noodle stir fry. Sat. night I went to the Terrace & fixed several plates to take back to the cabin (I had eaten lunch so late; & wasn’t ready to eat before they closed the buffet). I had tiger shrimp on lemongrass skews w/ mango/papaya chutney; blue corn tortilla crusted duck breast appetizers; eggplant parm appet.; carved VA ham w/ steamed veggies & baked potato. I had another plate of my “signature” pasta which I kept for breakfast the next morning.

Last night’s dinner was wonderful. I had the fried calamari again, along w/ my “signature” salad. There was a delicious chilled asparagus/chorizo/onion & crouton salad w/ bacon vinaigrette dressing. Had prime rib & the most delicious potatoes au gratin. Today at lunch I had the best pizza ever ( almost as good as Aurelio’s). It had a fancy name (which escapes me); but basically it was sliced Italian sausage, proscuitto & mushroom. Last night I watched a stupid movie (“The Alibi”) before taking a sleeping pill. I was asleep by 10:30. Was awakened once when the ice bag on my foot developed a leak. Slept til 9 this morning. What a relief to finally get some good sleep.

We’re rockin’ & rollin’ again today. I’m disappointed that we’ll make the passage between the Straights of Gibraltar between 1-2 am tomorrow morning. A shame; I’ve always wanted to know just how close together the 2 countries are. I joined some of my trivia friends after lunch for a new game “Buzz Word”. They give you a theme word (ours was round); & then they give you clues w/ all answers having the word “round” in it. We breezed through all but one of them. “Another name for a cartwheel like move in the Olympics” . We never could come up w/ “round out”. Came in a disappointing 4th. Let’s hope we can redeem ourselves again in a few hrs…….
Posted by Unknown at 11:16 PM