Not sure where to begin, except at the beginning….

This cruise was an eastbound Transatlantic crossing departing from Miami. Since I would be flying back to Ft. Myers at the end of the cruise, I chose to hire a limo service to drive me over to MIA. Traffic was a mess getting to the port. My driver took a wrong turn; & we almost ended up in Coral Gables. But we made it finally about 1:30; & I was able to walk right onboard.

My cabin is very nice; 8th back from the front of the ship where you can feel every wave. I’m right by the forward stairwell & the Med. Ctr. With a ship this size it’s easy to (re)learn your way around. I’ve seen a few familiar faces from my previous Med. cruise on this ship last year. As it is now almost through day 4, I have yet to make it to the dining room. So, I don’t know if either of my favorite waiters from last year are here or not.

After 3 days, I am surprised to see that we are still taking the southerly route. We have stayed course pretty close to due east (or just a degree or 2 north of east) ever since we left MIA. The map today shows us about the same latitude as Daytona, FL & about 350 miles SSE of Bermuda. We have had some very high winds & rough seas. A lot of passengers & crew were sick the first 2 days. Barf bags for the taking all over the ship.

Being so far forward, bedtime is interesting. The pitch is so bad, your stomach does flips when the bow rises up; & then you get this loud thump & shudder when the bottom hits the water again. I had to tape a drawer shut because it kept opening & closing. Took the spare hangers out of the closet to keep them from clanging. My mattress is unbearably hard & the pillows (I’ve been through 3 different kinds) are ridiculously thin. The first night I was awaked about 3:45 by my neighbors. I have a connecting cabin where the door between is slightly smaller than the frame. Their light came shining through the cracks into my room. I could hear every word they said or from their TV. I was fuming. The next morning my stewardess got duct tape to put over the crack which helped w/ the light but not much w/ the sound. Needless to say I am not sleeping enough.
I have taken all but one of my meals in the Terrace Café. The buffet has had everything that I would have ordered from the D.R. menu. And I’ve had some pretty darn good things. Starting w/ breakfast. I’m getting my fill of those awesome chocolate croissants. And I’ve discovered that instead of self serving hot water & packets of hot chocolate mix, if you ask the waiter to make it for you, it comes out extra special. They put milk through the espresso machine & make the richest hot choc. you can imagine.

Dinner the 1st night, I had the most tender fried calamari; mushroom/pork carpaccio & the most delectable Chilean sea bass w/ a white wine sauce. That night I did the “create your own pasta”; & he overshot the garlic by a mile. The pear sorbet I had for dessert even tasted like garlic. The next night’s buffet had a Spanish theme w/ a twist. There were grilled scallop/chorizo skewers, swordfish w/ chorizo & tomato salsa, proscuitto & melon, sushi & shashimi (I know, not exactly Spanish). David Cooke, the Cruise Director, joined me just after I started eating. Very interesting (but sometime arrogant) man. He was having the chicken/pineapple/garlic stirfry. It smelled so good, I just had to try it too. I was going for sorbet for dessert when I smelled this most divine smell. They had bananas foster simmering right next to the ice cream cart. Man o’ man; that was the most orgasmic caramel sauce I’ve ever had. If I hadn’t have been stuffed, I’d have gone for seconds.

For lunch on Sun. I had a fabulous chorizo pizza & tacos. Sun. night I brought a tray down to my room so I could watch movies (more on that in a min.) A great dinner that night that included (guess what) chorizo & asparagus salad (yummo); spicey broiled shrimp; tiny little cheese soufflé; eggplant parmigian; creamed escargot w/ garlic; cream of asparagus soup. I had so much food, I had to space it out over the entire night’s TV session. Had room service breakfast this morning; fruit & choc. croiss’s & some of that fabulous hot choc. Went kinda light w/ lunch today (about time). I fixed a beautiful mixed salad w/ blue cheese dressing (which has changed since my last visit, good but not as great as it was) & rare London broil w/ béarnaise sauce. They had my favoritepink grapefruit sorbet on the D.R. menu last night; but it hasn’t shown up yet at the buffet. They’ve been stuck on this cassis sorbet, which I do not like at all.
I’ve already finished one book; & watched 4 movies. I hit the jackpot this cruise w/ the movies they’ve got scheduled. I watched “Little Miss Sunshine” the first night (a total waste of time); “Volver” the next night (a whole movie in Spanish w/ subtitles is a lot of work, but worth it); last night I watched “Bobby” (a little disappointing)) & “Dream Girls” (very good despite the fact that I can’t stand it when somebody is casually doing something normal or mundane & suddenly breaks out in song). 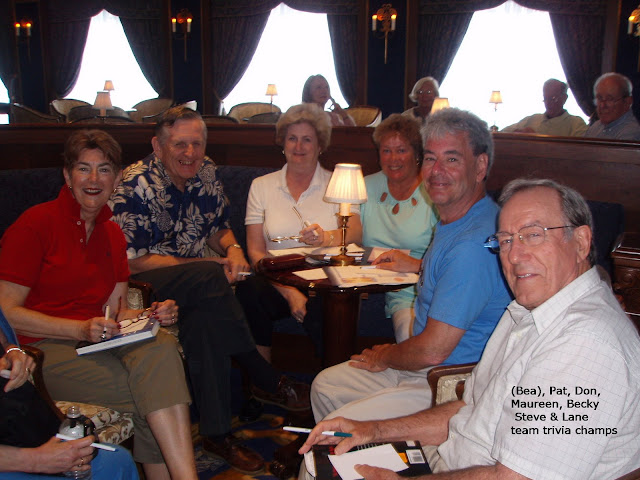 I’ve gotten involved w/ team trivia w/ several of my C.C. friends. The first day we came in 2nd; the next 2 days we came in first. We’re so competitive now that we always sit at the same table, in the same chairs every day; & I write down the answers w/ my purple pen for luck. You know what they say, “If it ain’t broke, don’t fix it”. There was a new game this morning called Mad Gab. So some of our trivia team came together to try this. They show clues on a screen (such as, “kinda lease a ice”; the answer was Condaleeza Rice). Some were very hard, some so ridiculously easy. I was much better at this than I have been w/ trivia. We play to earn “Big O” points which we will redeem later for things like caps, shirts, beach bags & such. 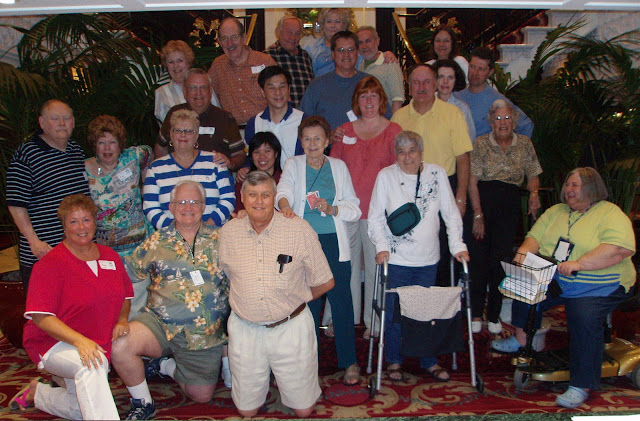 Once I got onboard I met w/ the Concierge to set up our Cruise Critic party. They roped off asection of the Horizon's (observation) lounge for us & served coffee/tea. Out of the 56 of us onboard, we were missing about 18. They were sea sick. But w/ the exception of a few couples that I wouldn’t want to know anyway, the rest of the group is great. We’ve got some travelers that have been to over 150 countries; & their travel stories are mesmerizing. We’ve got 2 gay (men) couples; a few middle aged single women, a lot of couples & a few older ladies traveling w/ friends. A few of these came up & hugged me when we first met. We’ve been chatting online for such a long time it’s as if we’d already known each other in a previous life. I run into people all over the ship; & we’ll sit down & spend some individual time getting to know each other. We’re going to meet on Wed. to have a group photo taken on the Grand Staircase so I can publish it on the C.C. website when I get home.


I’m heading to the Terrace Café for some dinner. It’s French night; & they’ve got French onion soup & escargot. I should have no problems finding something good to eat. Til next time…..