Oh my, the last day at sea. You know the fat lady is singing when you come back to your cabin after breakfast to find that plastic “tarp” on your bed & your suitcases have been pulled out from under the shadows of the bed skirt. Sorry, I jumped ahead a bit. I woke up a little before 8; but not in any hurry to get up. I opened the heavy drapes & observed the procession of power walkers (I’m on the promenade deck) speeding past my window. The sheers were still closed so I was “invisible”. I laid there & read til 9. Again, the seas are so calm. When the Capt. made his daily announcement he said it would be warm but not hot & that we could expect some intermittent showers throughout the day.


The last few days I’ve given up on my hair. I leave the room & face the new day w/ hair as flat as if I’d just raised it off the pillow. I went first to the Bistro to get my thermal mug filled (to the rim, this last time) w/ cappuccino. Thought I’d look at breakfast at the Lido buffet; spotted a few things I wanted to try. While going through the line, L&L walked up & we took our usual position by the “indoor” pool. From the buffet, I tried a Mexican egg/potato pie (would have been really good had it been HOT). I got a few slices of bacon (mopping the grease off w/ a paper napkin, which are next to impossible to find on this ship). I took a croissant so that I could finish off that half empty jar of chocolate spread that I’d been wagging around in my bag for at least 8 days. I’m gonna miss that choc. spread. I thought about lifting a few jars to bring home; but I never buy croissants or even white bread for that matter. Then from the Tastes café menu, I had to have a half order each of blueberry cheese blintzes & the apricot French toast. You feel sort of compelled to go around & get one more of everything you love & can’t get anywhere else. By then it was time for one last stab at trivia. As if the questions couldn’t get any harder. My team only got 3 out of 15 questions right.


OK, THIS IS WHERE I NEED TO TELL LOLITA TO STOP READING THIS PARAGRAPH & MONICA TO START PAYING ATTENTION!...... I went to Clint Van Zandt’s final talk. Today he focused on unsolved cases he’s worked on. He started w/ O.J.’s murder trail. In his opinion, O.J. did it, no question about it. The Natalie Holloway disappearance….he’s convinced that those 3 men drugged her drink & took her to a secluded beach. He feels that she probably died as a result of too much alcohol, the drug & the stressful situation (accidentally). That they knew exactly where to dump her body so that the current would draw it away from the island (probably through the Panama Canal). Jon Benet Ramsey…..too much evidence points to the mother (Patsy). I somehow had missed the evidence that stated that the ransom note when compared to family members’ handwriting, matched Patsy’s in 51 different points. As for Madeline McCann (the 6 yr. old British girl who disappeared from her hotel bedroom in Portugal)….he says that the parents had a predictable pattern of behavior; going out at the same time every evening for dinner & each one consuming about a bottle of wine each night. His most recent case (2 wks. ago) was in Perugia, Italy w/ the Meredith Kercher murder (who was found in her apartment bedroom w/ her throat cut). Even though it was staged to look like an assault & robbery, enough evidence exists that he believes her American roommate, the Italian boyfriend & Italian drug dealer, stole money from her. When she confronted them, the drug dealer did the deed; & then they all conspired to trash the place & claim that it was a break in. Clint is going to appear on tomorrow night’s (Fri.) Dateline NBC w/ his latest findings on the case. When Clint talked about some of these cases, especially children, he gets choked up & pauses because he, himself, was abducted as a child. Very interesting man.


L&L had already been up on the pool deck & had the deck waiters reposition our lounge chairs & made a nest for the rest of the day. We sat & read for a while, handing out tips & saying goodbye to these fabulous crewmembers. About 1:30 we checked out the Lido buffet. The macadamia nut encrusted chicken fingers w/ orange/ginger dipping sauce caught my eye; as did the herb/garlic roasted pork belly. I know, pork belly? Never had it before. But it was awesome, a little fatty w/ hard crispy skin; but fabulous. Also had a piece of tandori (crisp & nicely spicy) roasted chicken, also wonderful. For one last time, I had a cup of the lobster melon gazpacho.

By the time we got back to our lounge chairs the sky had turned very grey; & you could see rain squalls off in the distance. The temperature was perfect, probably 75. We stayed til about 5:30. When I came back to my cabin, I found a small shopping bag on my bed along w/ a letter. It was from my stewardess, Paula. She had bought a thermal travel coffee mug from the crew shop that said Crystal Cruises on it. Being embarrassed about taking my Oceania Cruise Lines mug around w/ me every day, I had inquired about buying one; but they don’t sell them in the gift shop. I was so touched; I had to run out in the hall & hug her neck. She asked if I had looked in the bathroom (I hadn’t). There on the glass shelf above the countertop were 2 coasters. One had the Crystal logo on it; & she had written “set your C. mug here”. The other she had turned upside down & drawn the Oceania logo on (remember she used to work for O.) & wrote “set your O. mug here”. I got all teary eyed. She is just the sweetest thing. She wanted me to have a souvenir and/or Christmas present from her. It meant so much. 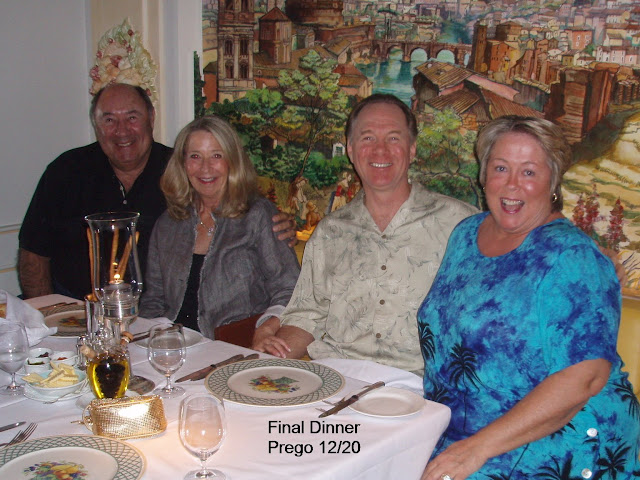 Tonight the 4 of us dined at Prego (Italian). We had 3 orders of bruschetta. They have finally gotten the recipe just right. Tonight’s was as good as what we’ve had in years past. Better late than never. The chef sent out a special appetizer…..a small roll of phyllo pastry stuffed w/ ricotta cheese drizzled w/ a sour cream basil sauce. Presentation was beautiful. I had the cream of Italian mushroom soup (remember it comes in the oregano bread cup). I also asked for an appetizer portion of one of the entrees…..mushroom risotto topped w/ a jumbo shrimp. This risotto is fabulous, 2nd only to the risotto they make w/ the white truffle oil. YUM! For the main course I ordered veal scaloppini served over angel hair pasta & steamed veggies. This was a little disappointing. The lemon/butter sauce was off; but the meat was delectably thin & tender. 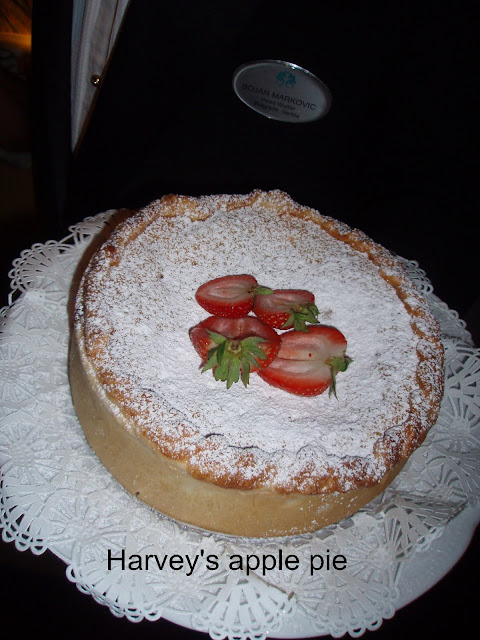 We had special ordered a deep dish apple pie for delivery in the D.R. last night. But there was a mix up; so they made it tonight & brought it up to us in Prego. Everyone saw the presentation, asking “what is that?”, “can I have some of that?” Harvey wanted it w/ raisins & plenty of nutmeg. It was good; but too much nutmeg for me. We left it hoping that the Maitre‘d & our waiters could have some later. Stuffed (again, one last time) we had to quickly say our goodbyes.
It was quarter to 10; & our luggage is supposed to be packed & outside by 11. I haven’t even started packing. They cut off internet service in an hr.; & I still have computer work to do (as well as 2½ hr. of internet time left on my package.) Now what do I do first??? Internet; they can wait on my luggage. It’s been a fabulous cruise. I got the rest I was looking for; & I’m so sick of food. I hoping this lasts until after the holidays. Maybe I can muster up enough will power to diet for the new year. Even though this was not an exciting cruise, like some of mine have been. But I hope y’all had a good time w/ the food portion. Can’t wait to come back to my Crystal Family this time next year. See ya soon.
Posted by Unknown at 11:38 PM

I am soooooooo jealous!!!  I wanna go on a cruise so BAD now.  Here I am scrapping at home for food, how nice to just walk over & EAT anything :O

I added you to my friends.  Right now, you're my only friend that reads my journal.  I decided to make it private, cause, for one, Safety.  But i wanna know who the heck reads it besides you...

So, I only plan to give access to those who ask :)  I haven't posted anything to interesting lately...  feelin kinda bored these days :/