Another dreamy night’s sleep. If only I had my new mattress from home onboard, I’d never get out of the bed. I must really burrow my head into that pillow cause every morning I wake up looking like a scarecrow. This, of course, means that I have to spend about 20 mins. w/ the flat iron to get presentable enough to set foot out of the door. So, it’s very late morning before my day gets started. We arrived in St. John’s, Antigua before 8 am. I had no great intentions of getting off ship. It was another misty, cloudy morning anyway. And the day alternated between partly cloudy & intermittent showers. 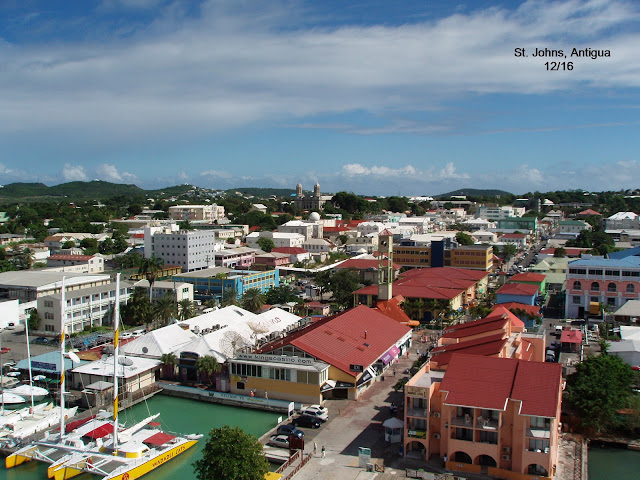 I went up to the pool cafe & had the apricot French toast again. I went searching for a quiet spot to read. Started in the observation lounge way up top; & in a short while they started music for private dance lessons. So, I went down to the bar off the lobby (which wasn’t even open yet); but soon large masses of people started to come back onboard (since it had started to rain again). I went over to the onboard cruise consultant’s desk to inquire about a possible future cruise (if you book another one while onboard, they double the past pax. discount). L & L already booked the Serenity next Dec.; & I am considering it if I can work it into my budget.
The 3 of us had made special requests for lunch in the D.R.; so we gathered there at 1. I had spotted 2 things from last night’s menu that sounded good. I had an appetizer of warm asparagus, prosciutto & thin slices of brie drizzled w/ truffle honey (can you say YUM?). I had an appetizer portion of one of last night’s entrees, pan seared sea scallops & tiger prawns on citrus/champagne risotto w/ a burgundy beurre blanc sauce. To die for! L & L had requested spaghetti carbonarra. It was very good, much better when cooked tableside. I had pink grapefruit sorbet for dessert. 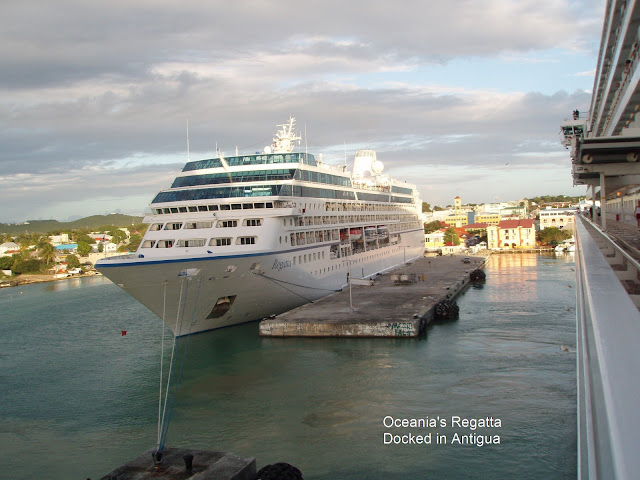 The Oceania Regatta was docked right next to us today. I went off the ship only long enough to take a note over to their gangway tobe given to the cruise director, David Cook. When I sailed transatlantic in March, he & I ate quite a few dinners together at the buffet restaurant. I just wanted to say hello & send holiday wishes. I then went to the movie theatre at 2:30. Saw the Bourne Ultimatum. Was a little too much action on such a full stomach; but I enjoyed it just the same. Went out for sailaway at 5 pm. My cabin stewardess, Paula, was out there. We had a long chat. Such a darling young woman w/ interesting stories about her life growing up in Romania. The rush to get ready for 6:15 dinner is unpleasant; but it’s the sacrifice I was willing to make in order to dine w/ L&L. 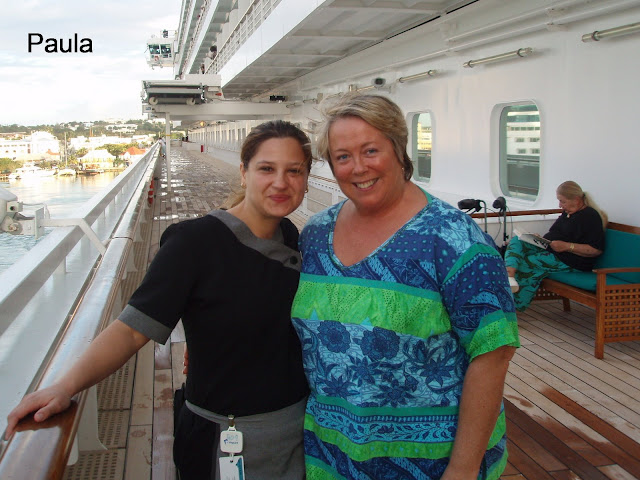 We had made special requests for dinner since the D.R. was a little weak. I had a mixed green salad; Leslie & I split one of those delicious king crab cakes w/ a spicy sauce. Larry had requested “T’giving” dinner; so they cooked him a small turkey breast w/ dressing, mashed potatoes, cranberry sauce & steamed veggies. Leslie & Harvey had ordered baked dover sole. And they both shared some of my (huge pile) of king crab legs & lobsters. I added a baked potato. We had requested a chocolate layer cake w/ cream cheese frosting; & it didn’t come out quite like we expected. It had thin layers of white cake w/ layers of chocolate mousse, topped w/ lemon flavored cream cheese frosting. We didn’t say a thing; just tried to eat it even though it didn’t satisfy the hunger we had for chocolate. In keeping w/ the sorbet tradition, I had “tequila sunrise” sorbet off the menu (which tasted just like the cocktail). The head waiter had other special requests at other tables, so he sent over a sampling of each to us. One was strudel w/ a rum sauce (delish) & the other was a bread pudding w/ rum cherry on top (divine). There was a little king crab left; so I asked our waiter to take it out of the shell for me & wrap it up for my breakfast. (Yes, I know my breakfasts are a little unorthodox.) 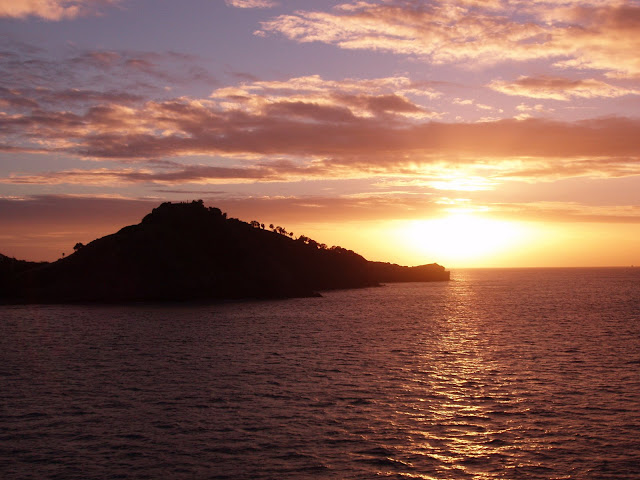 We’ve nicknamed ourselves “trouble”. The maitre d’ in the alternative restaurants & the poor head waiter in the D.R think we are…….we’ve made arrangements, changed our minds, asked for extra reservations; & they do it w/o even flinching. That’s part of the Crystal touch. To them nothing is impossible, as long as you ask nicely. And that’s why I love it so much here. I was back in my cabin early 8:30 with the desire to do my computer stuff, get in bed & read & sleep til my heart’s content. The only thing that could make this better would be if you all could be here too. Til next time…….
Posted by Unknown at 10:54 PM