Back by popular demand...

This story should start with my ride over to MIA. I was picked up at 9:30 by my Pakistani driver. A very nice man, who loves to talk. First thing I noticed was the strange route he was taking out of N. Naples. He traveled east on Immokalee Rd.; south on Livingston, west on Pine Ridge; south on Airport & then east on 41. Low & behold, he was going to take the E. Trail to MIA! What’s up with this??? He said, “Oh, it’s the most scenic & direct way to go.” Not necessarily that it was the most direct way to get out of Naples. Anyway, we’re trucking along & he mentions that he is, of course, Muslim. I proceed to tell of my travels to Istanbul; & my fascination with his religion. We get into a long discussion about Islamic extremists & how Osama Bin Laden is obviously dead (his opinion) & the US Government doesn’t want to admit this because then there would be no reason to continue the war on terrorism. Through the Everglades we go & then turn on 829 & 826 (or was it the other way around?). I told him I had never had someone take me on this routing. After 3 hrs. I had to say to him that if we had gone the way everybody else goes we would have long been at our destination. At least he got me here safely; if not late for my planned rendezvous with my friends, Leslie & Larry from Boca.

Had no wait lines; went right onboard & headed to the D.R. And as if I wasn’t having another deja vu moment, there sat L & L w/ our old friend, Harvey from Toronto. The circle was complete. We had a lovely lunch which consisted of an asst. seafood appetizer plate. There was baby shrimp cocktail, smoked salmon rosettes w/ chopped onion & capers & a small dollop of crab salad. For my main course I had (dark meat) chicken tenderloins, breaded & fried w/ rosemary sauce on the side, garlic mashed potatoes & asparagus. We're off to a good start!

We rushed through the meal in order to get upstairs to make extra reservations at the alternative D.R. There is always a long line to do this. We’re now holding reservations in both restaurants (Italian & Asian) for 8 of the 10 nights. That’s Leslie’s idea so we can decide at the last min. what type of cuisine we’re in the mood for; & can cancel the other one. Works for me. Since she has a long history with Crystal, they will let her get away w/ making more than the “allowed” 2 reservations per cabin. The rest of the afternoon was spend just sitting by the pool area catching up on stuff. I had my first cappuccino of the cruise; & much to my surprise it was not as good as it normally is. Remember last cruise when the capp. machine was broken most of the time? Well, they replaced it w/ a new fancier version that has a computer that takes the guess work out of the brewing process. It’s strong; & that’s about all I can say. Gonna work on this tomorrow & maybe get them to override the program & see if they can produce a good “human made” cup of joe.

We had reservations in Prego (Italian alt. rest.) for 8pm (which unknown to us was the exact time lifeboat drill was to take place). We stopped in & asked if we could come earlier; & they said no problem. So L & L, Harvey & I went at 7:15. As usual, we wanted everything on the menu. We had them whip up their special recipe of bruschetta; & then asked for an assortmentt of all the appetizers on the menu. They brought it out on this huge blue square ceramic platter mounted on a pedestal (similar to a cake plate). On this platter was lemon oil poached lobster tail medallions, Kobe beef & foie gras on white truffle flavored celeriac (a sort of celery puree), strips of grilled eggplant wrapped around roasted red peppers, zucchini wrapped sea scallops on pumpkin puree & prosciutto over catelope & figs. All fabulously delicious. I had a less than outstanding Caesar salad. We all sampled the ravioli filled with pumpkin, dried apricot sprinkled w/ a light dusting of nutmeg (interesting).

For my main course, as usual, I succumbed to the herb encrusted baby lamb chops w/ rosemary gravy served w/ garlic mashed potatoes, steamed broccoli & asparagus & sautéed spinach w/ garlic. Need I say more??? For dessert I had Bellini sherbet (just like having a frozen Bellini in Venice). Almost forgot, halfway through the meal, the announcement was made for lifeboat drill. We all looked at each other & looked around the restaurant & nobody was getting up to go. So, we were bad! We chose to ignore safety for the sake of our appetites. Hope we don’t get in trouble. By the time we finished the meal we had pulled away from the pier. I came back to the cabin about 9:30 & started my unpacking. Pretty soon we were crossing the Gulf Stream & the bouncing began. I crashed, hard. Was awakened about 3 am by the tossing. I knew it was going to be an interesting “ride”. 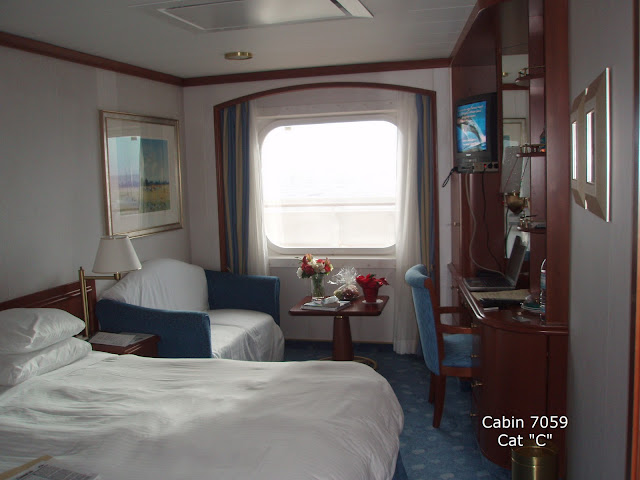