Just as I laid down last night, the winds picked up & the seas were 15-18’. I could lie on my back & front but not on my side (without toppling over). I did manage to go to sleep; & amazingly woke up at 4:30 am when it began to calm down. Laid there for another 2 hrs. before I could go back to sleep. When the Capt. made his announcement at 9 am, he said we were going to be delayed further arriving in Grand Turk (probably 11:30). The skies had cleared up, seas were a little choppy; but the winds were still very strong.

I got e-mail from Dorn saying that it was too windy for the little puddle jumper planes to fly into Grand Turk; so he would not be coming onboard to visit. So I dressed; & went to the Bistro w/ my big thermal mug & had them fill it w/ cappuccino. Carried that up to Tastes (my favorite little restaurant by the “indoor” pool). They serve a late “order from the menu” breakfast. I had a delicious western omelet to which they added cubed potatoes & green olives (nice touch). Then I tried a half order of apricot French toast. French toast spread w/ apricot jam & served w/ cinnamon whipped cream & maple syrup. Awesome. Sat & read until our arrival in GRT. 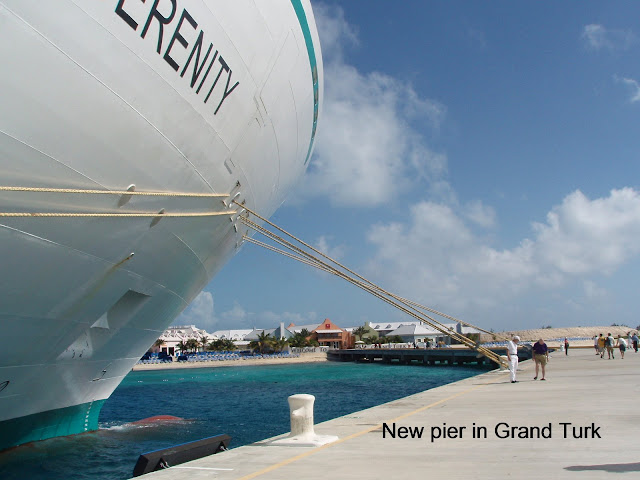 Since I hadn’t on my previous visits been able to explore their new cruise terminal, I disembarked about noon to walk around. Thankful for the high winds since it tempered the scorching temperatures. The whole complex is made up of new buildings painted every pastel color you can imagine. Of course, there is the obligatory Little Switzerland store & several other lesser known duty free shops. There is a large (Jimmy Buffet’s) Margaritaville restaurant; & a beautiful stretch of beach w/ cabanas. Behind the restaurant is a huge free form pool for cruise ship passengers. 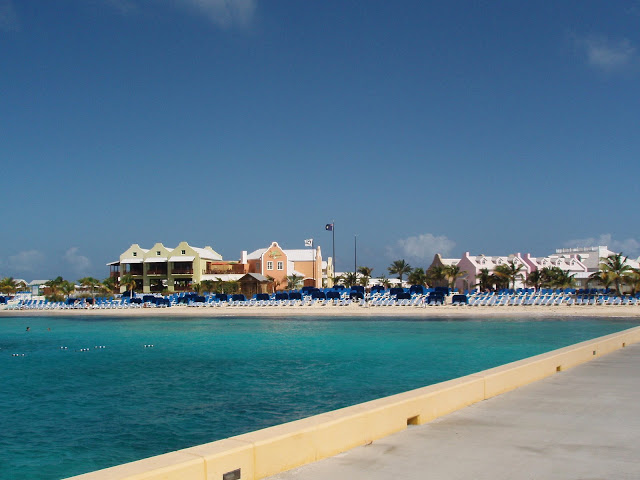 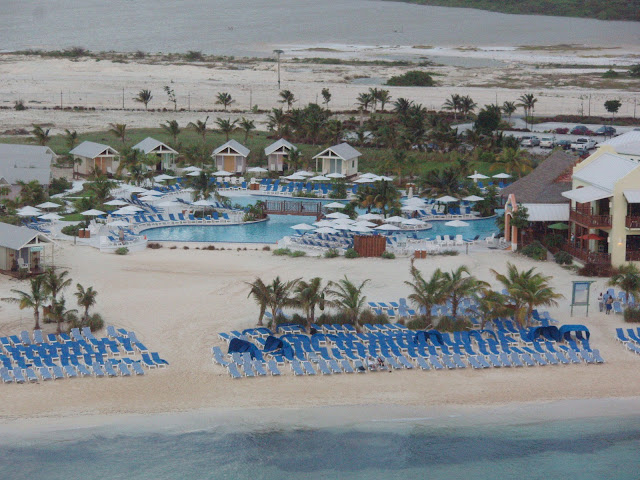 The Sea Princess pulled in right after we arrived; so the beach saw good use from the two ships’ load of Pax. I found a shady spot to sit & make quick (& expensive) phone calls to Dorn & then Michael. An hour later I went back onboard. Although it had been barely 3 hrs. since I’d had breakfast, I decided to have lunch in the D.R. before they closed at 1:30. 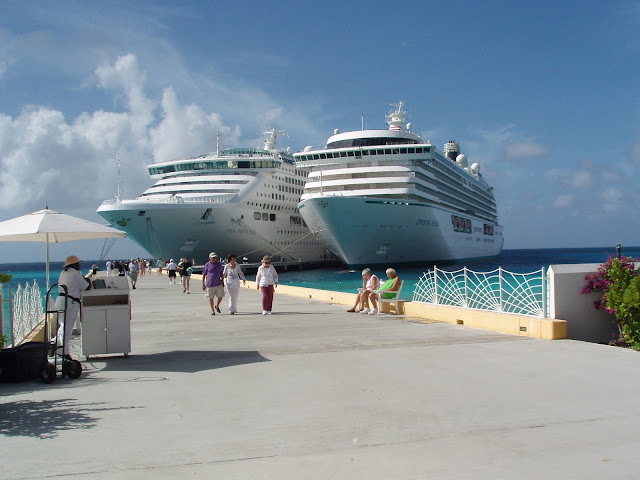 For starters I had a small salad that was made of tiny slices of grilled zucchini, baby eggplant & red peppers fanned out around the plate w/ little dollops of finely diced red onion/mint relish. The plate was beautiful; & whatever they marinated it in before grilling made it full of flavor. A big hit w/ me. I followed this w/ (believe it or not) cream of green bean soup w/ garlic croutons & a splash of dill flavored cream. Yummy. My main course wasn’t such a hit, however. Spaghetti Carbonara. It wasn’t bad; just not great. The big attraction was the use of real julienne strips of pancetta rather than crispy “American” bacon. But the meal was topped off by delicious cantaloupe/honeydew melon sherbet. True to form, Crystal still makes the most fabulous cream soups & homemade sorbet/sherbet (yes, I said the very same thing about Oceania Cruise Lines).

Stuffed & feeling like a nap, I held off & went to read in the Coffee Bar for a while in hopes of running into Leslie & Larry. No luck; so by 3, I laid down & took an hr. nap. I never ran into L & L. The last plans we’d made was to eat at the poolside café tonight for dinner. Since we were so late arriving today, the ship stayed in port an hr. later. So I lollygagged around til 6 to watch sailaway & listening to Satchmo sing “What a wonderful World” before going back to my cabin. I was stinky from the day’s heat, hair plastered flat to my head. I get back to find that L & L had left a message on my phone saying that instead of going up later to the café, they wanted to eat in the main D.R. 10 mins. from now. I had no choice but to cover up this morning’s makeup w/ more; pile on the perfume & go w/ flat hair (embarrassing). 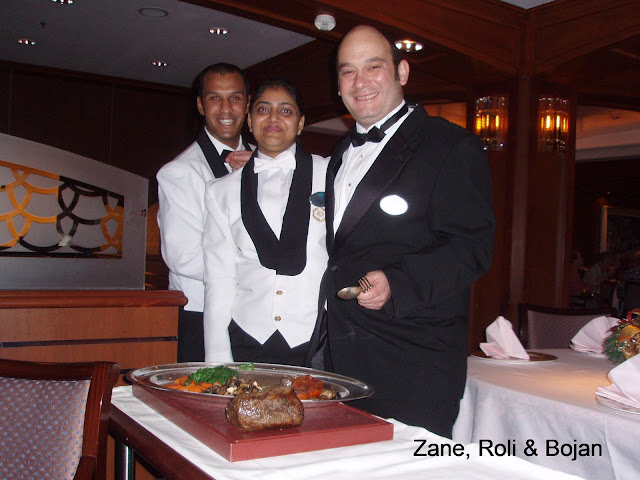 I fussed at them for not giving me more notice; but all was soon forgiven when they said they had put in a special order for chateaubriand. I started off w/ a fabulous appetizer of a seafood enchilada w/ cheese, lime crème fraiche & heart of palm salad. Thought I’d give the Caesar salad another try, unfortunately it wasn’t any better than it had been 2 nights ago in Prego. I couldn’t pass up the bow tie pasta w/ tomatoes, roasted sweet peppers, zucchini, eggplant, garlic & fontina cheese; so I had an appetizer portion to go along w/ the beef. They were preparing cherries jubilee in our section; but since I’m not a fan, I passed on it. Instead I had orange-Compari sorbet; & Leslie & I shared something called a banana ice parfait. It was a banana flavored cross between mousse & ice cream shaped in a dome w/ little squiggles of caramel sauce. It had a strange consistency like whipped butter; I’m still trying to decide if I liked it. 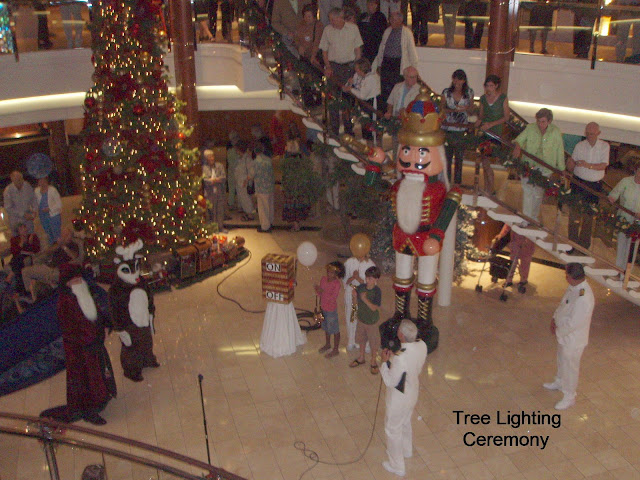 Tonight was the Christmas tree lighting ceremony for the big 2 deck high tree in the atrium. The Captain was dressed like Father Christmas. And since Dec. 13th is the annual festival of lights in Scandinavia, there was a procession of costumed singers (snow ice angels) that paraded through the dining room singing a Scandinavian song. I don’t quite get the Scandinavian connection. Crystal Cruise Lines is owned by NYK, a Japanese shipping company. We run our clocks forward one hr. tonight; so I felt compelled to come on back & get all squeaky clean before climbing into bed to finish a book (that I started this morning). The seas have been manageable since we left GRT; so maybe the worst is over. I may not get rocked to sleep again for the rest of the cruise. Until next time…….