I woke up before the alarm went off; not enough motion to keep me in that blissful lull. This sea day was partly cloudy, smooth seas (dammit); & the captain said we’d probably sail through a few quick showers (which we did). I still wanted that eggs benedict I didn’t get yesterday; I barely made it into the D.R. before 9:30 closing. I asked for a half order (1); & was glad later because it was not quite as it should have been. The egg was done all the way through, almost to the hard boiled stage. The Hollandaise on top had been baked until it was a sheet of goo. The flavor was good; but it looked like it had been sitting rather than made to order (which is so unlike Crystal). 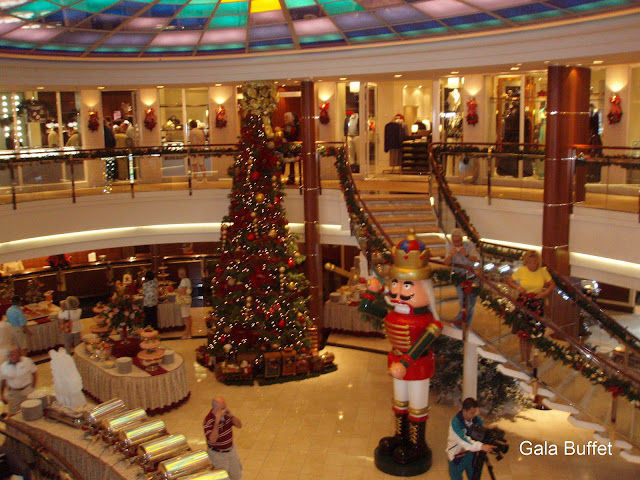 I was curious about the chocolate chip waffles. I got a half order, which was one waffle about 4” square. A regular waffle w/ several chocolate chips melted on top, served w/ a thick strawberry ragout & fresh whipped cream. It was fabulous. It came w/ a fruit compote; & I had some fresh squeezed grape juice (I think I prefer the bottled kind). After breakfast I went to the Purser’s office to pick up my passport; & stopped by the cruise consultant’s desk & made another “open booking” for 2009. Leslie & Larry have booked the same Costa Rica/Panama Canal/MIA sailing in 2008 & 2009 for this same time in Dec. So, at least for the time being, I’ve booked the same. 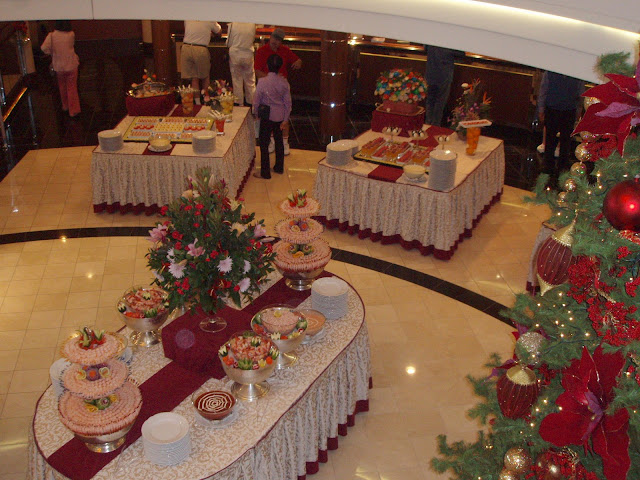 They were already in the process of setting up the big Gala Buffet in the atrium lobby. Rather than have a late night buffet, they have an impressive massive feast at noon on one of the last sea days. They open up 30 mins. early & have special lighting so that people can take photographs before the hungry masses converge & destroy it in record time. You should see some of these older people dive into the table w/ all the lobster medallions & huge tiered compotes of jumbo shrimp. I’ll bet if you’re #500 to go through the line, there won’t be any left. I went down later & took a few pics; but chose not eat from it. 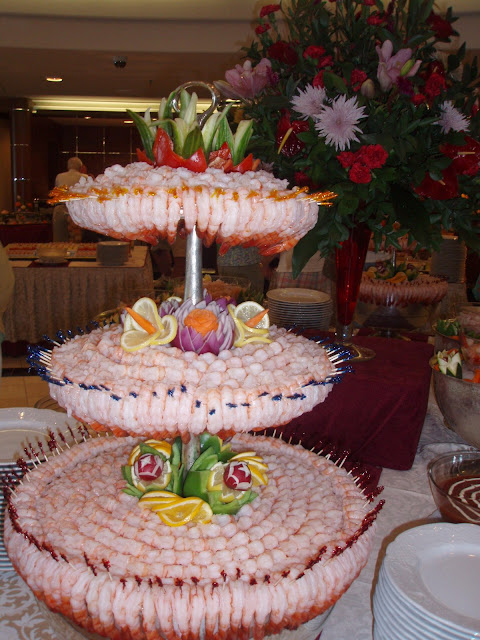 I went to the Bistro & had my mug filled w/ cappuccino; & went to look for L&L. They were just sitting down to eat breakfast at the poolside café. She said she had no repercussions from her fall yesterday. Her arm had stopped tingling; & she had nearly full range of motion in her shoulder. That’s good news. When they finished we went to team trivia; another 2nd place. Hoping to change our luck we changed our team name, changed table location & even sat in different positions around the table. Basically, we just stink. It’s not that we’re imbeciles; it’s just the questions are so obscure that I doubt that my winning team from the Oceania cruise could get these right. What book has the longest sentence in it? Le Miserables (800+ words). Unreal, isn’t it?

Then I stepped next door to hear part 2 of Cliff Van Zandt’s lecture (FBI profiler, remember?). He highlighted some quotes from Nostradamus that “sorta” predicted the 9/11 attacks. Then he proceeded to point out that most clairvoyants/seers/mediums are more wrong than they are right. Law enforcement considers them pretty useless; but have to consider their information just for the sake of the media. There wasn’t a lot of “meat & potatoes” to today’s talk; although tomorrow’s sounds more case specific. Afterwards I went up to “our spot” on the pool deck & read w/ Leslie for a while. Larry was off for another golf lesson. Today there was almost no air moving; & I was too hot to stay put long.

About 1:30 we decided to get some lunch. I made a salad from the Lido buffet (lots of hearts of palm, artichoke hearts, pickled beets & mixed greens). I’m getting so sick of eating (did I say that?), I thought I’d just get a burger & hot dog w/ no buns. Well, they had chili, which I had to put on the hot dog w/ some shredded cheese. By the time I finished this, I was stuffed (again). I tried to go back & read by the pool; but was too full & too hot. So, I came down to the cabin & read awhile & was soon fast asleep. Had a nice 90 min. nap.

It’s the Capt’s. Farewell dinner (formal); & that meant the full beauty regimen. Earlier in the cruise I was getting pretty good at getting my hair to do what I wanted it to; but not the last few days. I hope I get an E for effort. I joined L&L in the D.R. For some reason Harvey showed up before we all got there; but left & we don’t know why or where he went. But Harvey’s kinda that way. We had made some special orders tonight. They prepared a large tray of fried calamari & some really delicious (cream) creamy marinara sauce. I also had a bowl of cream of parsnip soup w/ mushroom confit & white truffleoil. Very good. We had also special ordered another chateaubriand which was lusciously rare (I had them cut my piece off before they sent it back to the galley to be cooked some more for L&L).

The veal scallopini caught my eye; & it was outstanding. Two small, thin slices sautéed served w/ angel hair pasta & a creamy porcine mushroom sauce (that part was to die for). It came w/ “young vegetables”. There was one 3” long baby carrot, one white asparagus, one green asparagus, one half a miniature yellow squash, one baby snow pea. They were placed around the perimeter of the plate like a sundial. Gorgeous presentation. I barely had room for the cassis-champagne sherbet; & Leslie talked me into sharing caramel panna cotta w/ sauce Anglaise. I’m glad we did; it was melt in your mouth creamy. A small inverted caramel custard w/ squiggles of raspberry puree in the white sauce Anglaise.

Again, miserably full. L&L went off to see the premier of the new show (which Crystal creates new about once every 18 mos). I knew I couldn’t managed to stay dressed to make it through the show; so I came back “home”. We get to run our clocks back one hr. tonight. So, once I’m finished w/ the computer, I hope to make some serious headway on this book I started 2 days ago; & have only made it about half way through. Oh, almost forgot.... guess I can’t read until I fix my tip envelopes & fill out this 5 (double size) page cruise comments questionnaire. That unpleasant end of the cruise crap…..good thing I have that extra hour!