I went to bed last night w/ the TV on so I could watch the “pseudo” sunset & sunrise. It went from a cloudy “dusk” just before midnight to a colorful “sunrise” a few mins. later. We were headed almost directly into the light; so I had to turn the TV off or else it would have kept me awake. I slept well; but not long enough. Got up at 8:45; & just couldn’t get going. Room service this morning was a ham & cheese omelet, a little bacon & milk. I’m going to save my yogurt & granola for later.
My tour to the North Cape was to depart at 10:30; but was delayed (who knows why) til just before 11. When I stepped outside it was drizzling rain. I guess our luck ran out w/ the weather. While all the older crowd is fighting for that front seat on the bus; I’m making a mad dash for the back row (5 seats & 2 windows all to myself). This tour does not have a guide, just an escort, Matt (who is one of the ship’s musicians). The skies are grey; but the rain stopped the min. we drove out of the small town of Honningsvag.

The roads are serpentine, no guardrails. Some curves I could look down & ponder the scary prospect of falling down these steep cliffs into the icy waters. There would be a house about every 5 mins; most live out in the remote areas because of the high cost of living “in town”. Just above the town & out along the mountain you’ll see rows of fencing up very high. Some is made of steel; some of wood, 4-5 horizontal rows maybe 100 yards wide. These are there to protect the town/settlements from avalanche during the heavy snows in the winter. Quite ingenious. 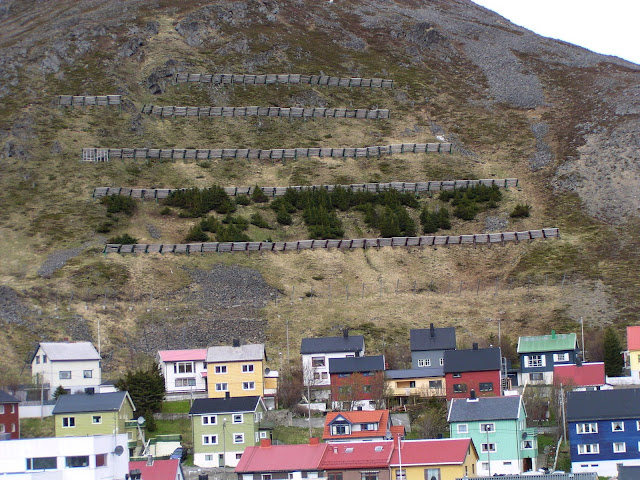 About half way through our journey we made a stop at a Sami camp. It really is just a place for tourist buses to stop for photos of what their life was like centuries ago. They had 2 tents set up along the road in which they displayed reindeer skins on the floor, hangers w/ clothing that was typical of that time, a small fire in one w/ a black iron kettle. I don’t know what kind of wood they were burning; but the smell was prominent & sweet (someone thought it was birch). One man dressed in Nordic costume stood outside alongside a reindeer. They kept a bowl of food in front of it; I suppose, to keep it standing still so we could take photos. I was surprised to see that reindeer are a whitish grey, not like the pictures of “Rudolph”. Then there was the obligatory souvenir shop, which I perused. By the time we reboarded the bus, there were a total of 6 buses. By the way, when I sat back down & looked across the street, I saw the house that these people live in. It looked like clapboard, dark green, lace curtains w/ a satellite dish mounted on the side of the house. You can say they’ve come a long way in the extreme North. 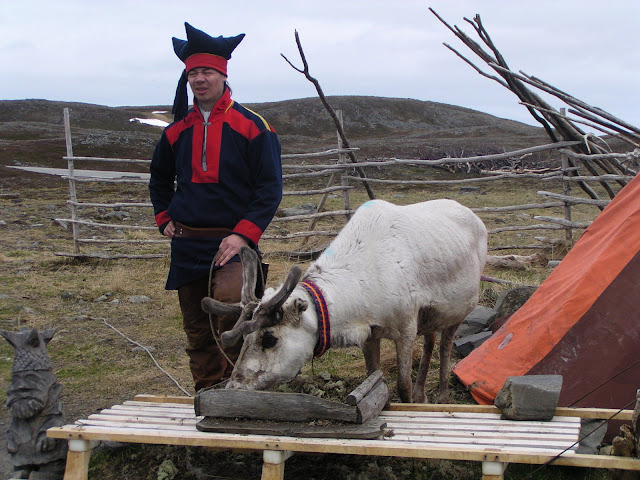 I had read about these “monuments” that the native people erect (usually up on a hill or mountain top) in honor of their dead family/friends. They take stones of varying sizes & pile them into a pyramid as a gift to the Gods. You see them everywhere. Just before & after the “Sami stop” we saw a total of maybe 50-75 “reindeer” grazing along the mountain side (at least that was what the other passengers would call these things they spotted along the way). They were in clusters of 3 -10. It wasn’t until I came “home” & loaded my photos on the computer & blew them up, I realized that some of them were moose (or would that be mooses?). Some of the reindeer were along the side of the road or walking down the middle of some of the cross roads we passed. They don’t seem to be fazed by vehicles. 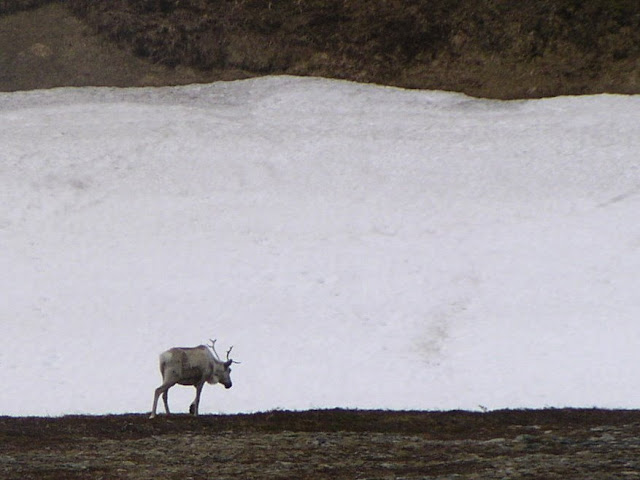 By the time we made it up to the North Cape, there was a tiny bit of sun trying to peek out. Thank God there wasn’t much wind or else it would have felt frigid cold. I had on a blouse under a fleece hooded tunic under a reversible nylon/fleece jacket. Only time I put on my gloves or pulled up my hood was out on the edge of the platform. There is a huge black iron globe monument marking the spot of the northern most settlement in Europe. There is actually a little more land further north; but it is uninhabitable. There was quite a long line to wait in if you wanted your picture under the globe. I thought what the heck; & asked a German man standing behind me if he’d take my picture & I’d take his. I also saw some interesting colored rocks; so I picked up a few as souvenirs. 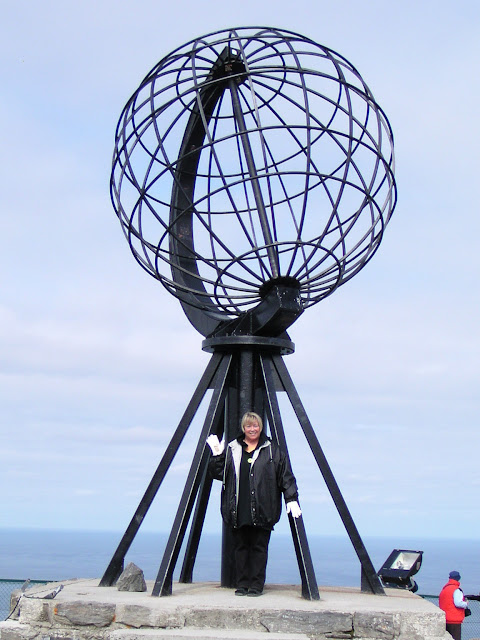 The Visitor’s Center is a large complex which includes tunnels through the rock where they house some historical memorabilia & a small chapel. The chapel walls are rock; dark blue ceiling w/ twinkling lights, blue lights that shine up from the floor, a simple carved wood alter & meditative type music playing. There is a two story high “Grotto Bar” w/ tiered seating overlooking a huge wall of glass that looks out on the monument & the Arctic Ocean. Quite breathtaking up there. There is a restaurant, a coffee shop & a large shop w/ overpriced souvenirs. They even have a tiny post office where you can send postcards (sorry, only 2 to a customer; they’re very busy). Unfortunately, I didn’t have mine written yet; & there are too many anyway. 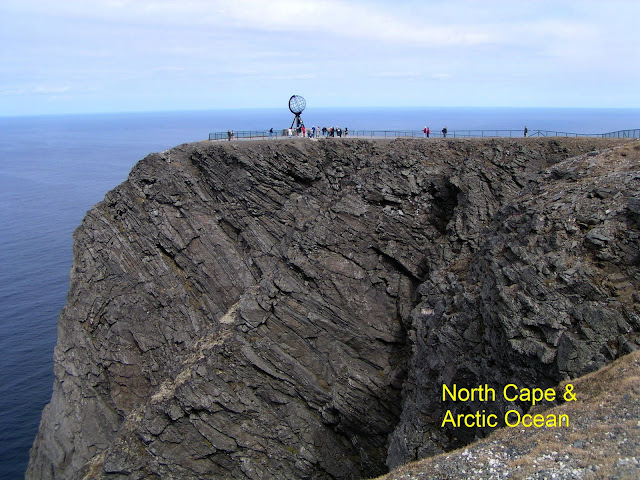 As we were making our way back to the ship, we passed this huge wooden "rack" on the side of the road.  We asked the driver what it was; & he said that's how we dry our fish.  He was nice enough to back up; & let us off so that we could take photos of this most curious sight. 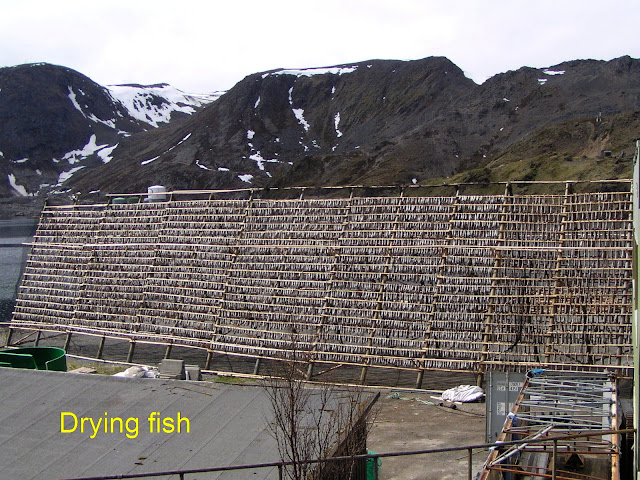 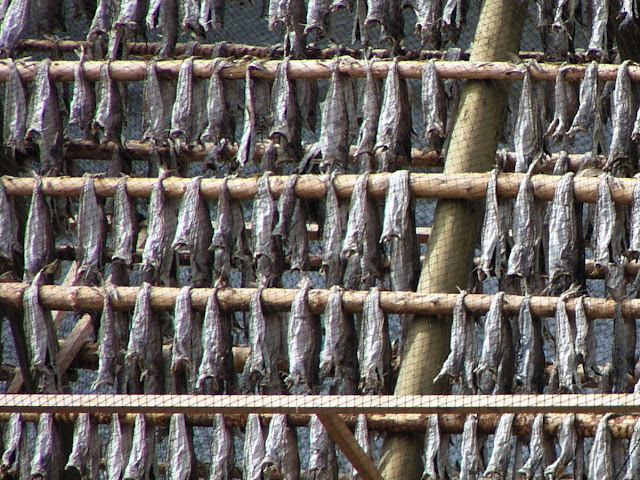 We returned to the ship about 2:30; & they were kind enough to keep the Lido buffet open a little late to accommodate those on tour. I had a roasted Portobello mushroom & veggie club sandwich; a big fat meatball & iced tea. I had to rush back to shower before my 4 pm massage. I explained to the masseuse that I had been having so much trouble w/ my lower back & headaches. She worked on me way longer than the 50 mins,; but she worked me over good. She must have spent 10 mins. trying to get a spot near the tailbone to let loose. My headache got some better. I know tomorrow I’m going to feel like I was hit by a mack truck.

I was in such a relaxed state, I came back to the cabin & laid down. Had nearly dozed off when Melita called to talk about their day.  Melita & Bill chose not to do a tour today. She said they had walked in town; & had (a very expensive) lunch at a hotel restaurant that he’d read about on the internet. Back onboard, they also took advantage of the empty laundry room; & got that out of the way.

Ship left port at 4:30; & we were going to pass the North Cape monument at 6 pm. So Bill wanted to go up & take photos. They said they would eat in the Lido area; & they would look for me. Since I ate lunch so late, I wasn’t in any hurry to have dinner. So, I decided to get up & take my dirty clothes to the laundry room (2 doors down the hall). I worked on editing today’s photos while I waited on the laundry. They were having a BBQ out by the Lido pool w/ live music & frivolity. It was 7:45 before I got up there. I walked everywhere looking for Melita & Bill. They had the dome over the pool cracked open a bit so the BBQ grill smoke could escape; it was cold as shit up there; & I didn’t put on a coat. So, I quickly filled my plate & went inside to sit down. The ribs were okay; quite fatty & could have used a good dousing of BBQ sauce. The kebobs were good, cubes of beef, onion, peppers & bits of hot dog (?). I had a delicious cabbage, carrot & raisin slaw & some mixed fruit.
I continued to search for Melita & Bill. I hadn’t seen them all day; & I missed them terribly. I should have started in the casino, cause that’s were I found them. Hard at work on the penny slots. We chatted about our day; & decided that we’d make it an early night. When I got back to the cabin, my steward had made the cutest (yet) towel animal on my bed – an elephant along w/ a certificate stating that I had crossed the Arctic Circle. I was in my jammies by 9. Too tired to even sit at the computer or even to read. I was just about to doze off when Melita called at 10 to say they were ready for bed also. (I later learned that they weren’t able to get to sleep, partly because of the midnight sun coming in around the curtains. And Bill eventually got redressed & went up to take photos at midnight.) I guess I was just so wasted that I fell right asleep (w/o drugs) & slept 9 ½ hrs. It was glorious sleep. 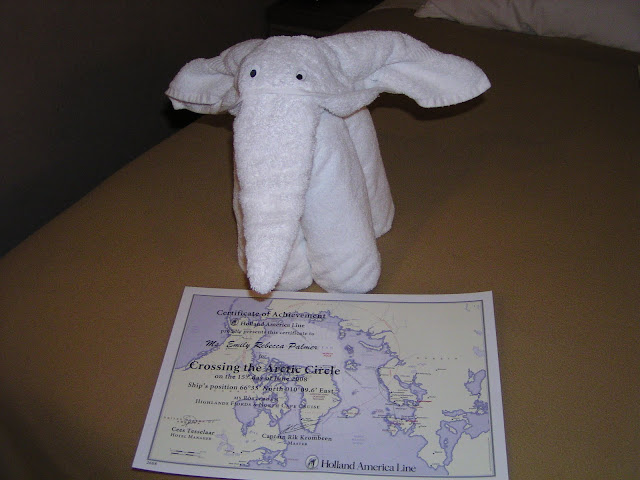