I woke at 7:45; & turned on the TV to see what the weather looked like from the bridge camera. Looked like a yucky, drizzly day at sea. So, I thought…..good day to wallow in bed! I laid there another hour & tried to go back to sleep; but guess I’d had enough. You’d think so being as I went to sleep around 10. I had ordered room service for 10 am; so I had my leftover raspberry yogurt & granola from yesterday. I made me a pallet on the sofa w/ a blanket & several pillows; pulled the coffee table over for my laptop & notepad. I spent the next couple of hours happily typing my journal & editing yesterday’s photos. A lazy day felt good for a change. Just like being at home in my lay-z-boy; only nothing good to watch on TV. And since this was to be our last sea day of the journey, better to rest up for the next 5 days of extensive touring. Room service finally came w/ hot chocolate, grapefruit & a tiny chocolate croissant (am I bad???). Melita & Bill knocked on the door about 10:45 on their way to the Mariner’s (past passenger club) brunch. I passed on this event not wanting to commit to anything in case I was feeling real lazy. I finally got around to washing that massage oil out of my hair; dressed & went up early & looked around the shops before our noon cooking class. 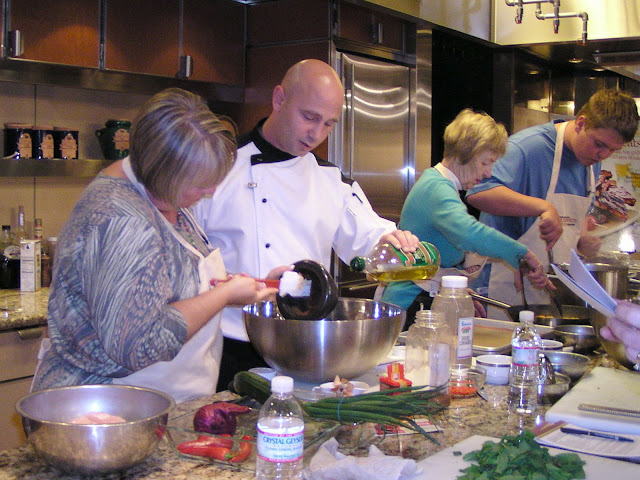 On the first day, Melita & I signed up for a “hands on” cooking class led by the Chef Shawn McKerness from the Pinnacle Grill restaurant. It is held in their Culinary Arts Center, which actually is a demonstration kitchen that’s set up behind the screen in the movie theatre. Long U-shaped marble countertops surround the chef’s working area. They provided aprons, notepad, pen, recipe cards & a bottle of water for our $29 fee. Class lasted a little over an hour; & he got everyone involved in dicing, chopping, mixing, & cooking. Melita had no idea when she came on a cruise that she’d be standing over a hot stove caramelizing fresh apricots, browning chicken breasts & chopping red peppers. My job was to chop shallots & make the spicy rub w/ a mortar & pestle. We completed 3 dishes: chile-rubbed swordfish kebobs w/ cucumber salad, chowder made w/ fresh corn, & baked chicken w/ apricots, ginger & roasted macadamia nuts. 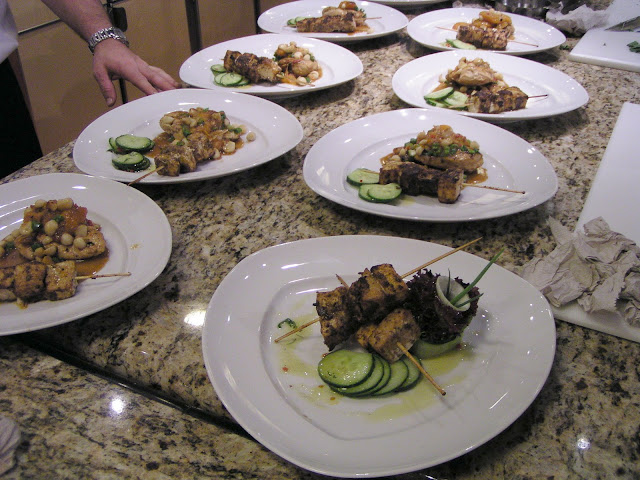 After we finished cooking, he brought out those neat plates that they serve on in the Pinnacle Grill. He plated everything; & then we walked across the hall w/ it & sat at a huge table in the Grill to eat. They poured wine; he sat w/ us & talked a while. I thought the kebobs could have been spicier (would that be my fault since I made the rub?). And the chicken was tasty except it was white meat. The corn chowder was outstanding. We both had a fantastic time. Well worth the time & money. Bill occupied himself somehow while we were cooking. He forgot to each lunch.
We all ended up back in our cabins for a little more rest. I slept over 2 ½ hrs. I went down to their cabin to borrow Bill’s sewing kit; & sat & talked for a good while. I told them to call me whenever they were ready to go up for dinner. We all agreed that the Lido buffet would suit our mood tonight better than dressing for the D.R. We went up about 7:30; & were surprised there weren’t many people there. We all had the mixed fruit salad compote & the lobster spinach dip made w/ a hot mustard based cream sauce served w/ home made nacho chips. I had Alaskan king crab legs w/ new potatoes & julienned mixed vegetables. Bill had apricot & prune stuffed pork loin w/ mashed turnips/potato. Melita had them make her a plate of all the vegetables that were being served tonight: turnip/potato mash, broccoli, asparagus & mixed vegetables. I had a scoop of frozen yogurt & Bill had a delicious looking rhubarb crisp w/ a scoop of vanilla ice cream.

We parted ways about 8:30. They were going to the casino (their luck has taken a turn since Melita won big the other night); & I went back to the cabin to finish writing postcards & typing today’s journal. About 11, I went up to the Explorer’s Lounge w/ the computer to upload 2 days worth of journal & photos. Unfortunately, I couldn’t log onto the internet because the ship’s server is down for maintenance (like, couldn’t they do that in the middle of the night). By the way, there will be a “night” tonight. Even though we’ve only traveled a few hundred miles south, the sun will set about midnight; & sunrise is around 3 am. So, it’s back to the cabin & hopefully to sleep right away. It’s an early day tomorrow.