Thanks to pharmaceuticals, I slept well. Alarm woke me up at 7:30; & room service was here right away. I only ordered yogurt & granola. Remember that salad I brought down w/ me from last night’s dinner? Well, duh, do you think I had a fork w/ which to eat it? It made a fine breakfast though (thanks to my cereal spoon). The view from the bridge showed wet streets outside; so I wasn’t exactly looking forward to another sailing excursion today. The highs were supposed to be near 60; but I don’t think it made it close. My tour was to meet in the lounge at 8:20; we were off by 8:40. Just as we walked down the gangway, the sun came out (as if a gift from the Gods).

Our tour started by bus through Kristiansand. The guide pointed out the few wooden houses that remain. Most had been destroyed by fire over time; & now they don’t even build w/ wood any more. We had delays along the roadways outside of town as there is heavy road construction. They are trying to widen the roads to 4 lanes & have to blast through solid granite mountains to do so. A few tidbits of info I picked up from the guide: Norway is 52% forest & only 4% farmland. The country is extremely long, very narrow except at the south end. If you were to look at a map & turn the country 180 degrees, the end of it would reach northern Italy. Yet, there are only 14 persons per square kilometer (you can do the metric conversion hopefully). But that’s not very many considering the country’s size. They have such little demand for oil that they export 90% of what comes from the North Sea off the western coast. They have so much water (waterfalls) to produce hydroelectric power, that they’ve recently built a pipeline to both the Netherlands & Denmark so they can sell power to them.
We finally arrived in the small seaside resort town of Lillesand. We were to have 20 mins. to walk around. After 5 mins., I wondered why we even stopped here. Unless it was just for a “potty break”. A parking lot in front of a souvenir shop, a few local stores (florist, grocery, sporting goods) weren’t even open. There wasn’t enough time to walk to the small cathedral (which is probably their biggest tourist attraction). Don’t get me wrong it is charming, but what was the point??? Back on the bus we drove another 20 mins. on winding roads through the forests to the settlement (I won’t even call it a town) of Skottevik. Here we boarded a motor boat that was to take us around the small islands & little coastal towns along the way back to Kristiansand. There isn’t much indoor cabin space; so most of us went up top. Thinking that we would be sailing in protected waterways, I didn’t bring my coat or my gloves (BIG MISTAKE). When we pulled away from the protected cove, we headed out to open sea for about 20 mins. (This is not what I bargained for.) The wind was whipping; the boat was bouncing wildly (that part wasn’t so bad); & within minutes I was freezing. I had the blanket around my legs & up around my nose & ears. I only had a small slit to see through. 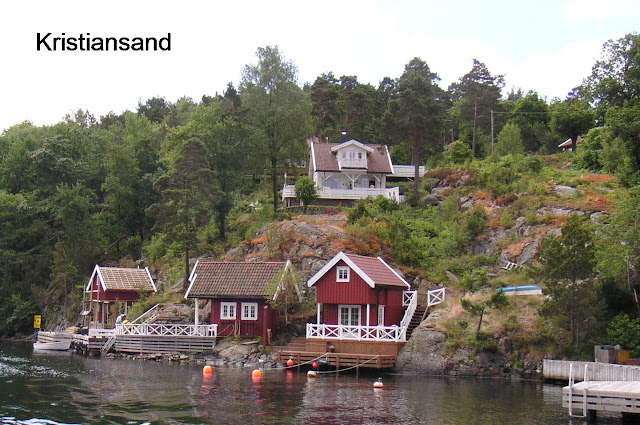 We finally pulled into a channel where we could view some beautiful cottage style homes, all w/ perfectly sculpted flower gardens in the yards. We passed swans everywhere. It was the first day of school vacation; & kids were out in kayaks waving at us. There was some gorgeous scenery, especially w/ the bright sun showing off the colorful houses. Then it was back out to open sea again. I’d had enough; so I went down below. 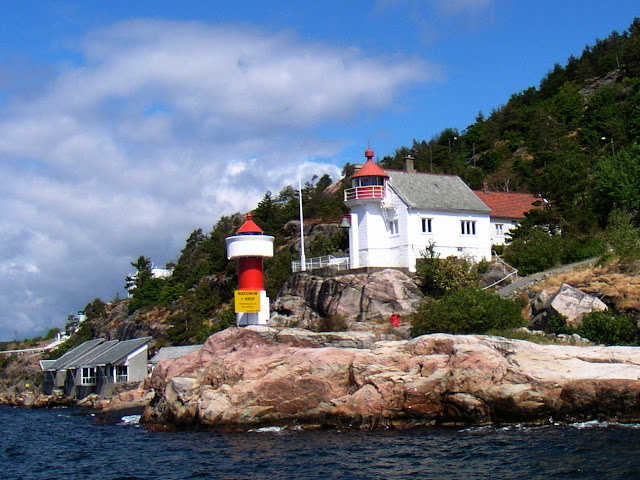 After I had time to warm up, I found a small spot aft where I could stand & see out of both sides. I dropped my camera; parts started rolling on the deck. The lens itself fell out; I freaked. Some guy said, “oh, you can just drop that back in there & pop the ring around it to hold it in place.” I thought, “this isn’t so bad”. The telescoping lens “thingy” was bent slightly upward & it was frozen in the out position. I couldn’t zoom in or out, camera wouldn’t focus, shutter didn’t move; I couldn’t even turn it off. If this had to happen, at least it was on the last day. I finally was able to turn it off & back on; but you couldn’t zoom. The shutter worked; so I shot hoping that I was getting something (I did). I was afraid to turn it off for fear that itwouldn’t work when I turned it back on. So, I left it in “standby” mode; until I heard the dreaded beeping dead battery sound. Oh shit! I changed batteries; & had a helluva time getting it to come back on. I think I must declare this camera “dead”.

The boat arrived back into “downtown” at 12:15. Some wanted to walk around a bit & make their own way back to the ship. The rest of us just stood there on the dock w/ the guide…….waiting & waiting. No bus! She gets on the phone, calls our shore exc. Mgr. & asks “where is the bus”? “What do you mean no bus is coming?” “They’re supposed to walk back?” “What about the handicapped people?” “I can call them a cab; but you’ll have to pay for it on your end.” The phone call ended. She apologized. Most of us took off walking. She then offered to walk back to the pier (almost a mile), get her own car, come back & pick them up (which she did). Just another example of the pitiful inadequacies in the shore exc. dept. A flaw that I had been reading about on the Cruise Critic message boards for quite a while. 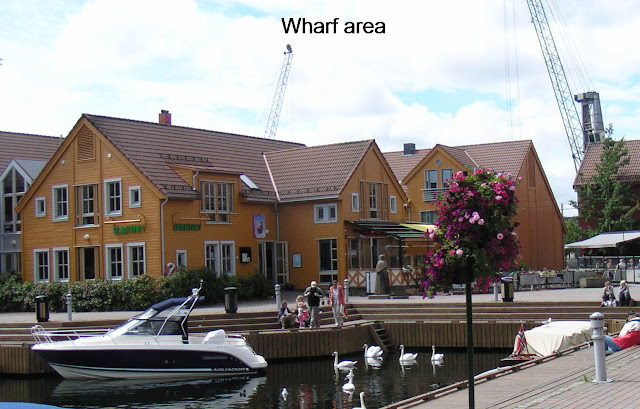 So, I proceed to walk toward the ship. Then I got to wondering if Bill & Melita had gotten off; & where they might be. I called Bill’s phone; & they were somewhere having an outdoor lunch. He couldn’t tell me exactly where they were; but he was describing the traffic that was passing by. He asked if I saw that bus or that motorcycle on the main road. It was another one of those “Laurel & Hardy” moments; but I finally found them in this charming seaside square very close to the ship. 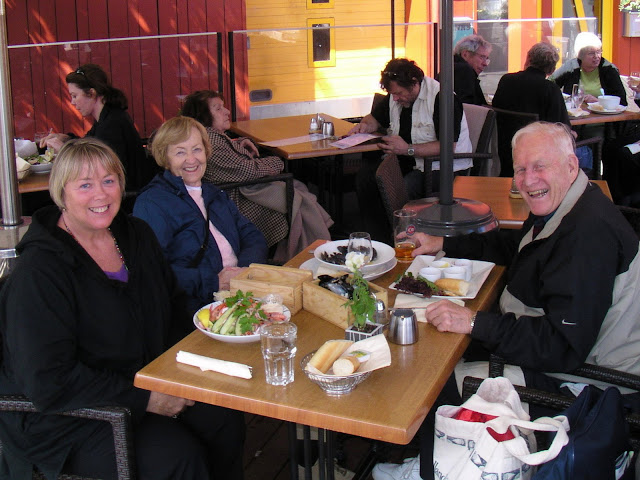 I sat down w/ them & ordered lunch at Restaurant Rett-I-Garnet next to the fish market. They both had a huge bowl of mussels (which I normally don’t care for, but these were quite good & expensive). I ordered a huge shellfish salad ($33 US). There were baby shrimp, baby lobster, whole crawfish (in the shell) over lettuce w/ a fabulous sort of sweet & hot dressing. The setting was lovely. Even though there was bright sun, it was still quite cool. So at 2 pm we walked the rest of the way back to the ship.  I just had to doa typically tourist thing; have my picture made beside this huge moose that was "standing" right beside the gangway. 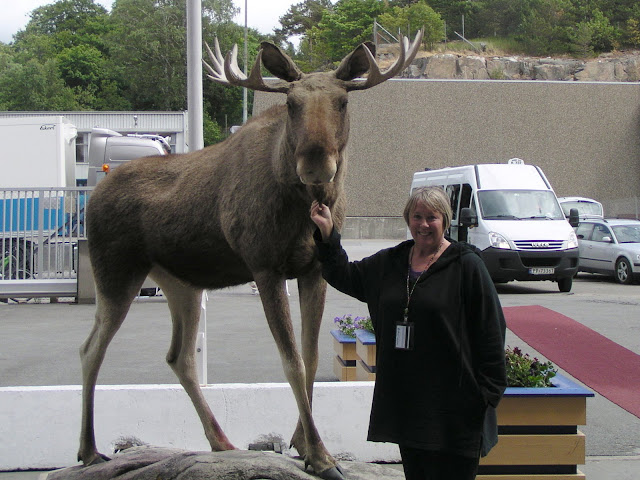 I went up to get a cappuccino; & to the internet café to print out tomorrow’s boarding pass. Melita & Bill stayed in the cabin & started that awful packing & took a nap. He had gone to the purser’s office this morning to purchase Danish krone for their stay in Copenhagen. He told me that he got all they had. I desperately need 200 krone for the cab ride to the airport myself. So, I visit the purser; & find out that they weren’t able to get any more in town today (I don’t buy that for a second). Can you say, “incompetent”? I’m not a happy camper. But Bill, being the generous person that he is, sold me 200 krone (for which I paid him $50 USD). Good thing I hadn’t filled out that comment card yet. I got back to the cabin; & started packing. This seemed to take forever.

Before departure time, the skies got grey again & a few raindrops fell. Somehow the weather Gods salvaged most of our last day. As we pulled away from the dock, the Capt. announces that the seas will be rough for a few hours as we cross a channel. We really started rockin’. I’d bang into the walls or the closet doors as I was walking back & forth to the suitcase. What I wouldn’t give to feel this all through the night. When I finished packing, I caught up on today’s journal & picked out the photos to send to my website. 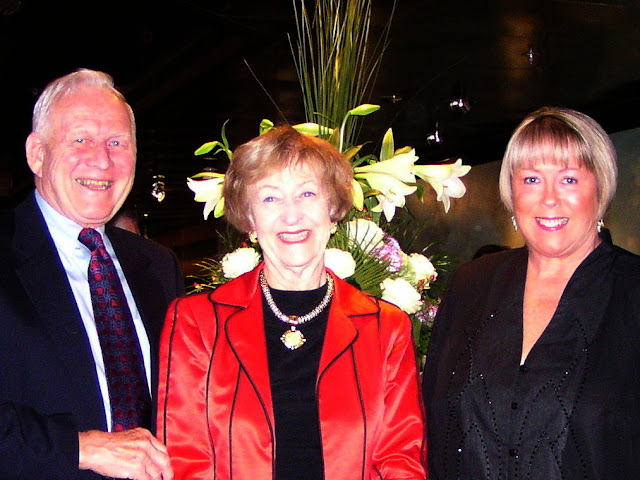 I met Melita & Bill at 7:30 for our last dinner in the Lido Café. Another dining dilemma, I wanted everything. Bill & I both a fabulous beef carpaccio w/ olive oil, mustard sauce & shaved parmigiano. They let me have a taste of their 2 soups: cream of double baked potato w/ sour cream & chives (divine); & an Indnesian Laso (I think) soup which was pureed banana, yogurt & a touch of cumin (so-so). Melita had the vegetarian entrée which was curried vegetables. Bill & I had the short ribs in red wine sauce w/ diced cherries & (overdone w/ no visible taste of onion) potato pancakes. Since I had an entrée dilemma, I also had some calf’s liver w/ applewood bacon & caramelized onion. Both entrees were perfection.

Even though the 2 nights in the main dining room were delightful; we have had so much fun in the Lido. My favorite deck waiters, Adi & Heru (from the Philippines, who’s smiles could light up a room), always bring smiles of equal proportion to our faces. Melita, Bill & I get involved in some of the funniest conversations; & we laugh till our faces hurt. I can’t tell you how much I enjoy traveling w/ them. I didn’t think anything could have been more pleasant than our previous trip to Amsterdam, but this far exceeded it. I’ve gotten so used to seeing them every day, it’s going to be hard to go back to the “real world” where we get so involved in our separate lives that we don’t even talk that often. 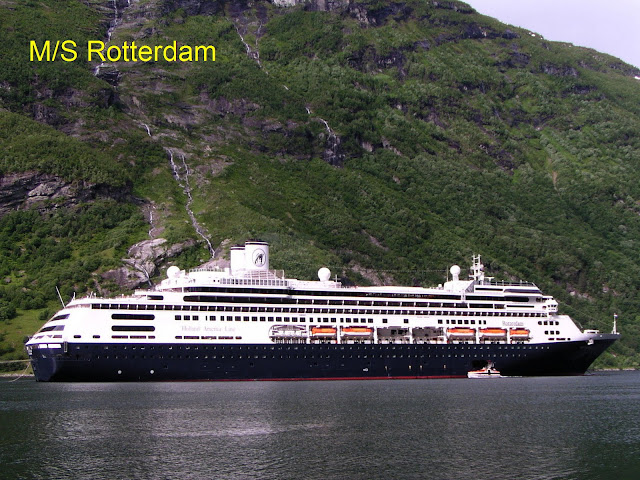 I went back to finish packing; & will be running up to Explorer’s Lounge shortly to (hopefully) quickly upload this to AOL. I must come back shower, wash my hair; & hopefully get a full night’s sleep in preparation for 2 days of travel. Unless something earthshakingly important happens Tues. & Wed., I will end this saga tonight. I’m kinda glad to be coming home, where it’s WARM. It’s been an awesome adventure. And I hope I haven’t bored you too much w/ the details. But, then again, if I did you could have stopped reading a long time ago………..